Where can you go to see 130 full sized metal sculptures inspired by creatures that roamed the desert millions of years ago? Unless you have been to the small town of Borrego Springs in California to see the Sky Art Sculptures, you probably wouldn’t know how to answer that question.

That was our destination for a day long excursion on a lovely California day, a day that was perfect for a beautiful hour long drive through some very scenic mountains! Our route on US-79S to S2 (San Felipe Road) to S22 (Montezuma Valley Road) with its twists, curves, hairpin turns and gorgeous overlooks elicited a chorus of “oohs” and “ahhs” from the two of us! 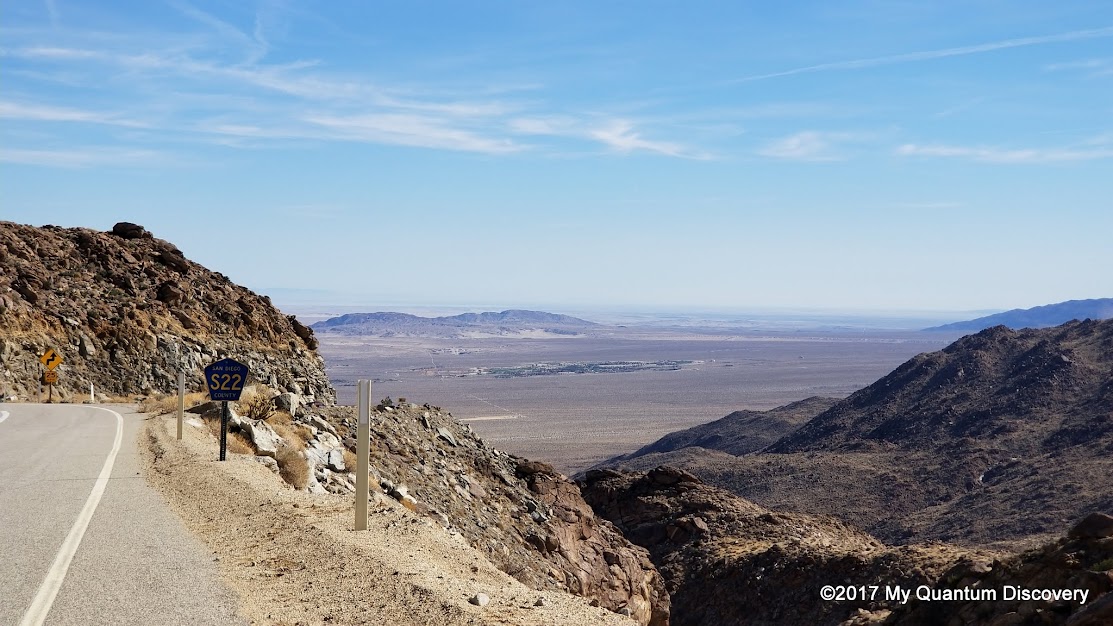 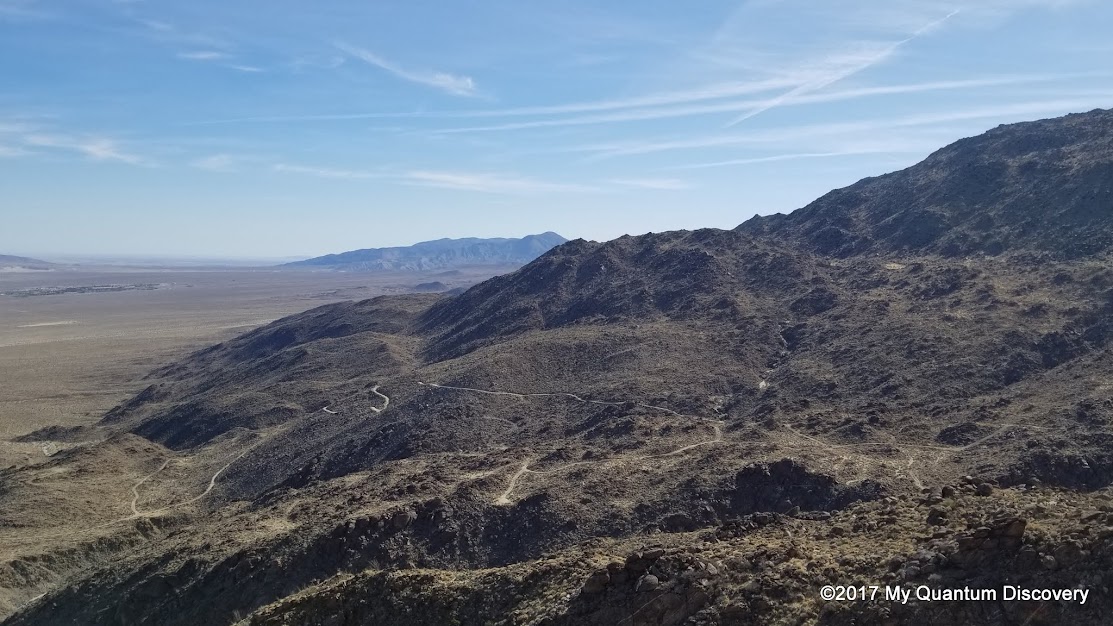 Named for the famed Spanish explorer Juan Bautista de Anza, who crossed this desert in 1774, and the Spanish word for sheep (“borrego”), referring to the region’s native bighorn sheep with 600,000 acres, Anza-Borrego Desert State Park is the largest state park in California.

Although we didn’t have much time to spend in the park itself, we needed a map of the area so we stopped at the Visitor Center where there were very informative exhibits and displays. Inside a small theater, there was an interesting 15-minute film, A Year in the Desert, being shown. 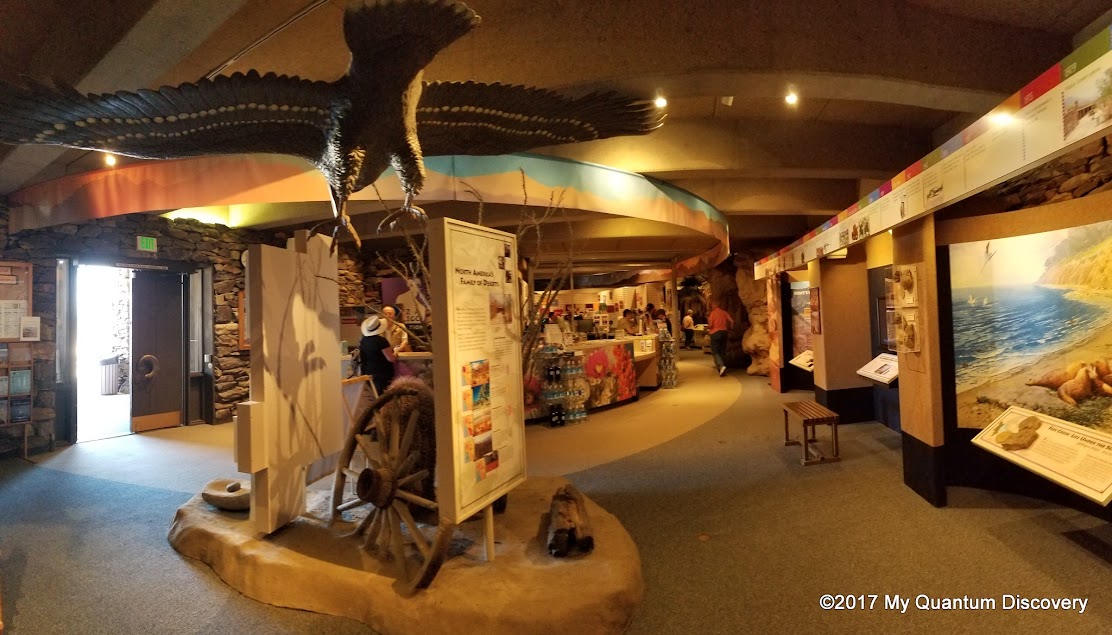 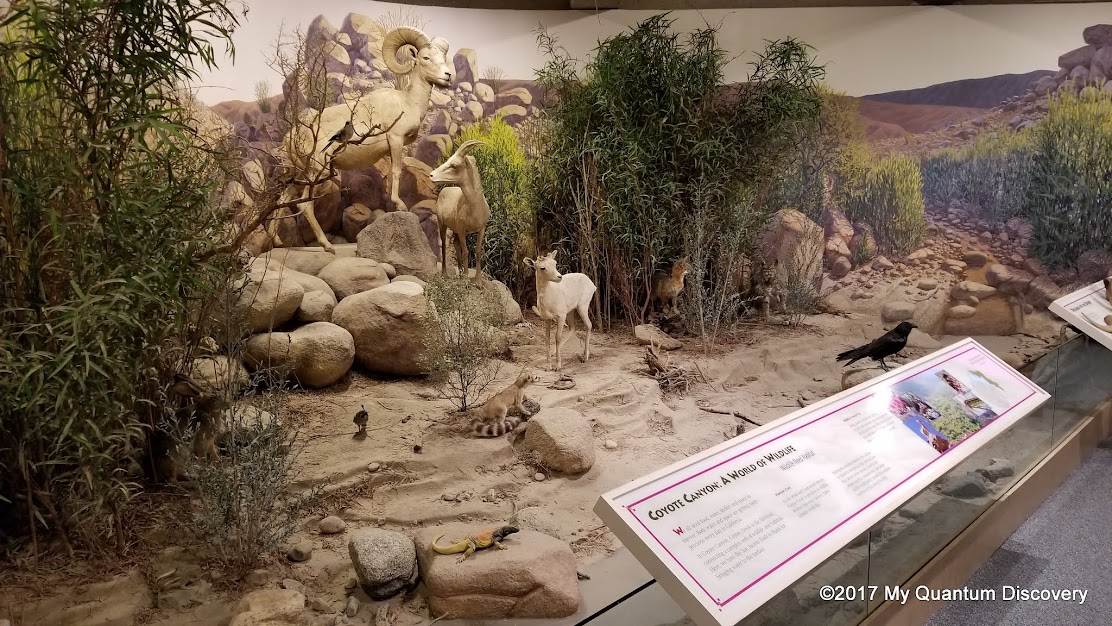 Outside there was a 1/4 mile paved loop trail through a desert garden which provided a quick look at some of the vegetation typical of the park. Signs identified the names of each plant. 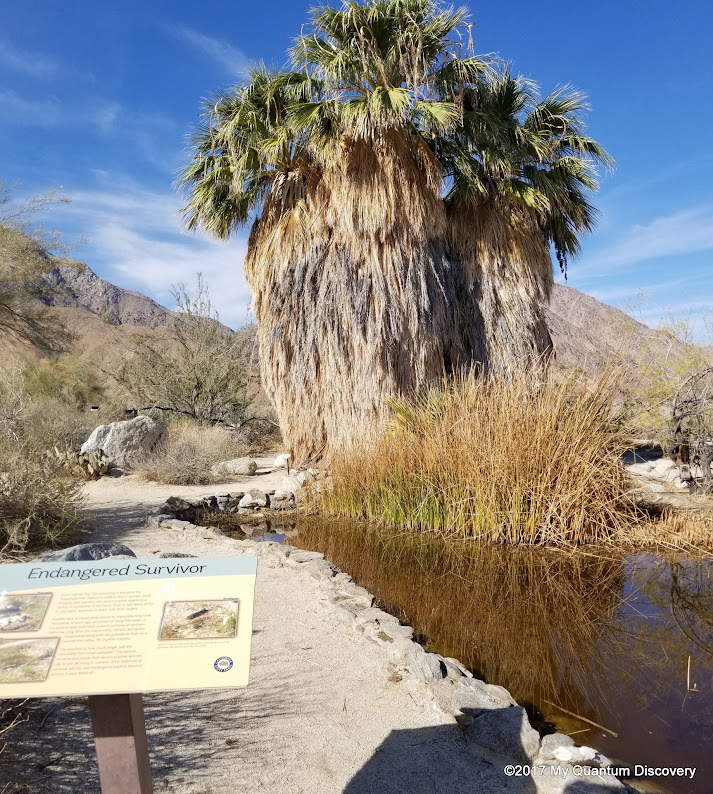 Near a huge California Fan Palm tree (the only palm tree that is native to California) was a small pond. Although we couldn’t see anything swimming in it, the nearby sign explained that this was a pupfish pond. Surprising to read about the existence of fish in the desert, fish that have evolved from conditions during the Ice Age to today’s precarious existence. They can thrive in fresh water or water nearly as salty as the ocean, and survive temperatures from near freezing to as high as 108 degrees Fahrenheit. When the water gets too warm or too cold or nearly dries up, these fish burrow in the mud at the bottom of the pool. Many of the natural streams and ponds that the pupfish rely on are diminishing. After millennia of survival, will the now endangered pupfish become extinct?

From what we saw in the Visitor Center, it looked like spending more time in the park would be worthwhile so at some point in time in the future we would like to return here.  There are no big box or chain stores here, as Borrego Springs has been named an International Dark Sky Park! Stargazing must be awesome here! 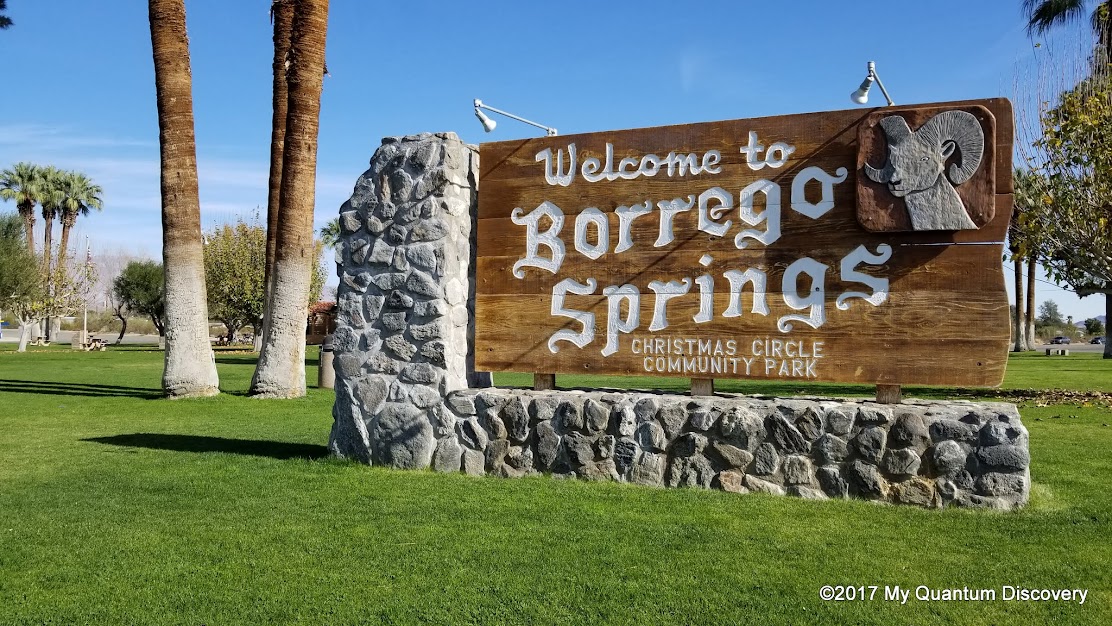 Armed with a map of the area, we left the Visitor Center behind, heading into the town of Borrego Springs where we drove through a few campgrounds for future reference. 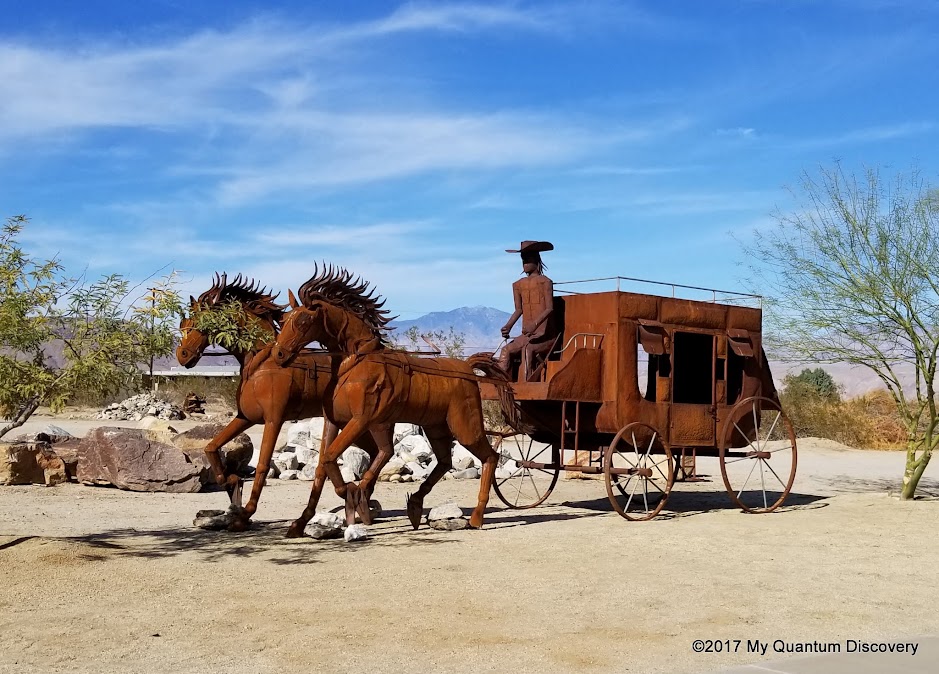 On CA79 near Rancho California RV Resort, there is a large gravel parking lot completely filled with hundreds of metal sculptures, all creations of sculptor Ricardo Breceda which we wrote about in this post.

The late Dennis Avery, heir to the fortune from the Avery Dennison Corp.(self-sticking, peel-off labels) and philanthropist, was a resident of Borrego Springs and the owner of Galleta Meadows Estates. He had a vision to add free standing art to his property, commissioning Ricardo Breceda to create over 130 metal sculptures of dinosaurs and other creatures which once roamed in Borrego Springs and other parts of Southern California. 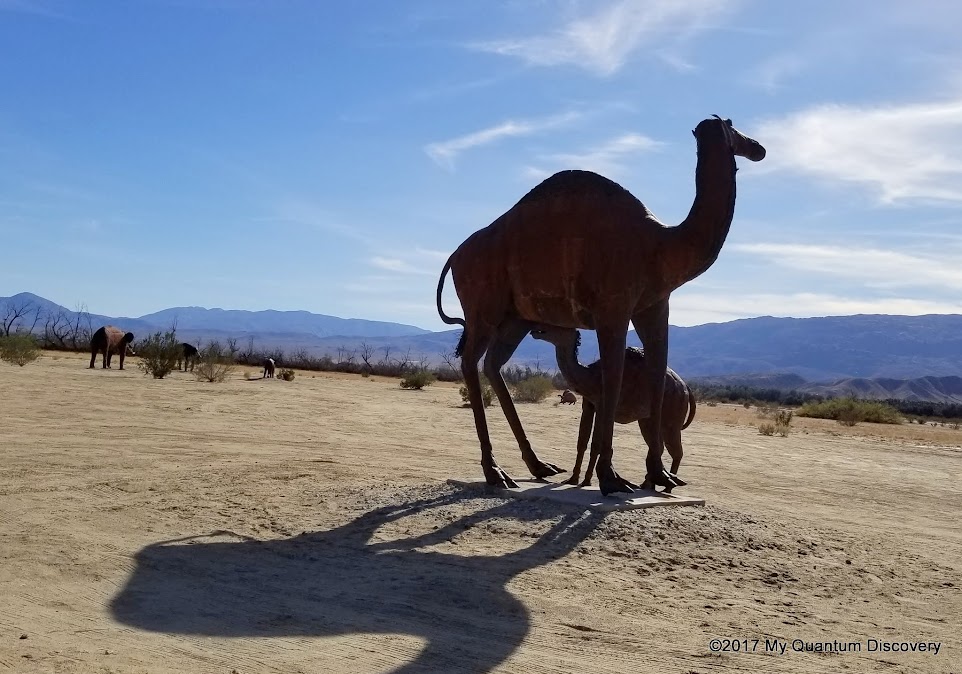 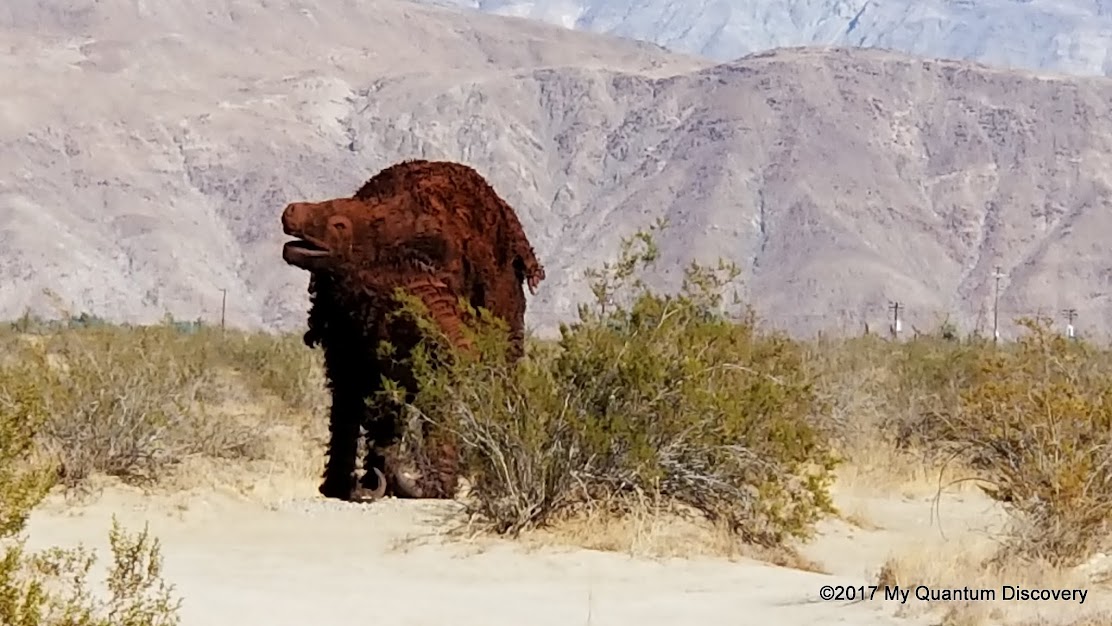 What fun it was driving along Borrego Springs Road seeing all of these sculptures! One thing to see them in a large parking lot back in Aguanga, but totally different seeing them in a more natural desert environment. Even though we knew these creatures were made of metal, we expected to see them start walking, that’s how realistic they looked!

The pièce de résistance, however, was the 350 foot serpent which spans across the road. Getting out to get a close up look at it, the detail is totally amazing! 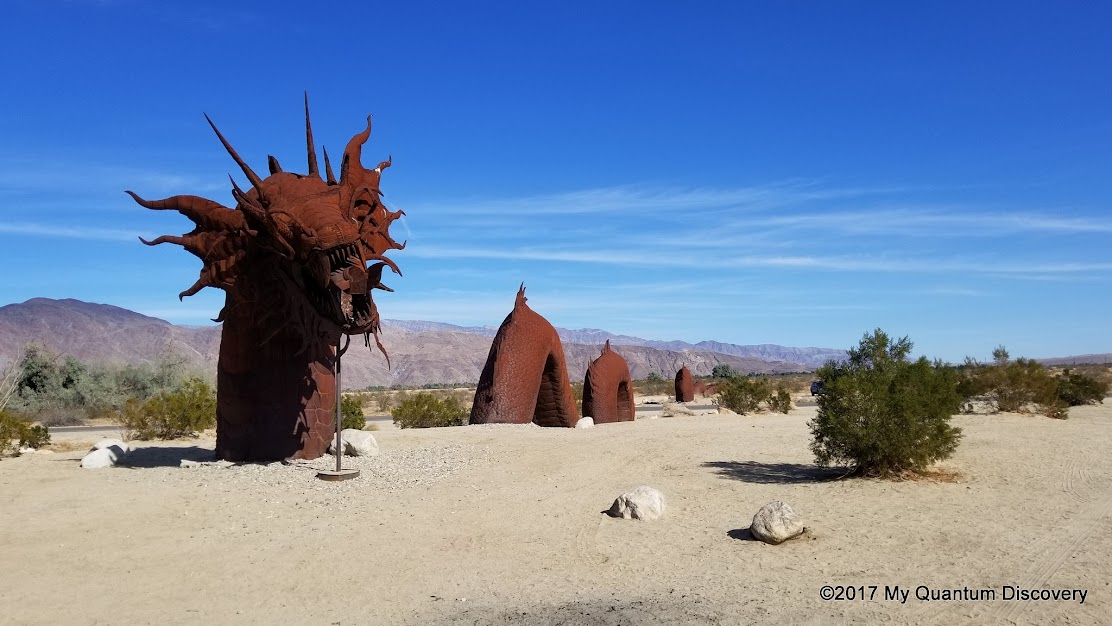 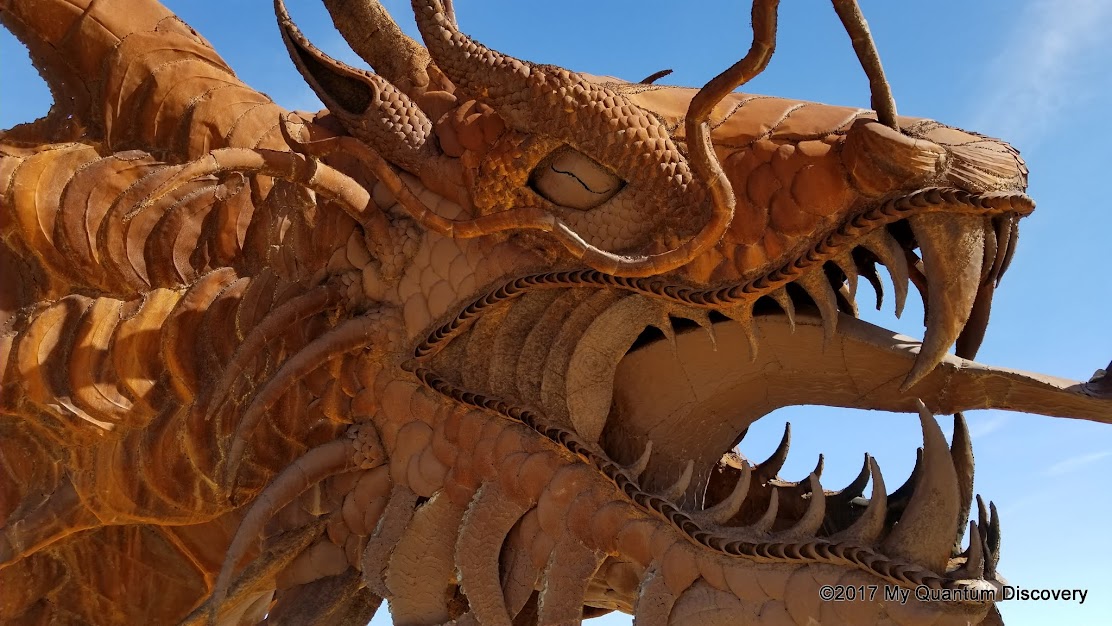 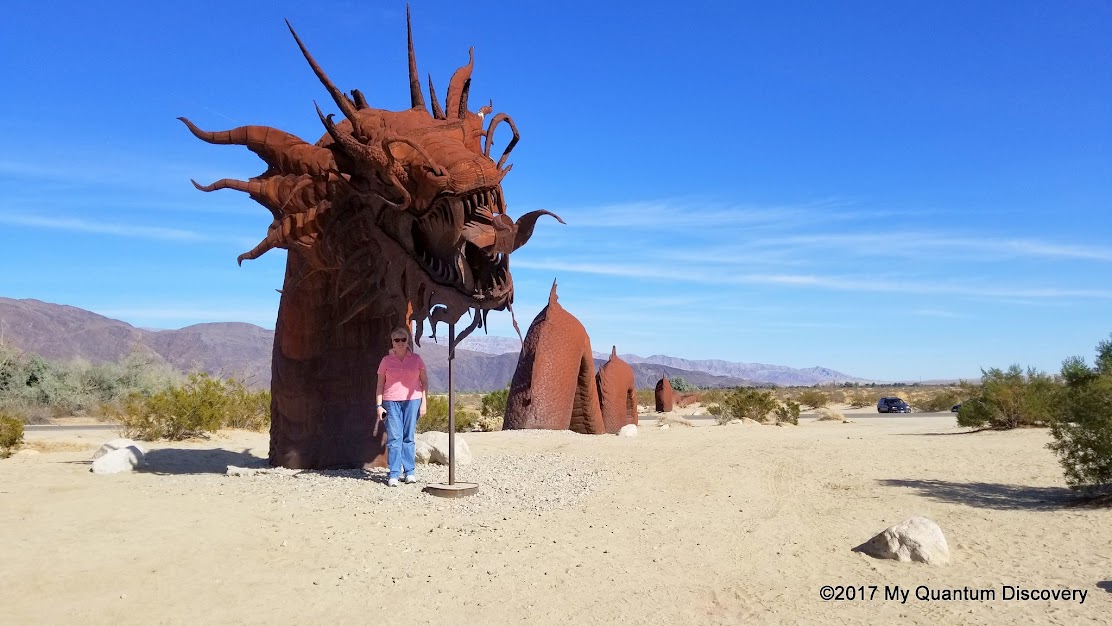 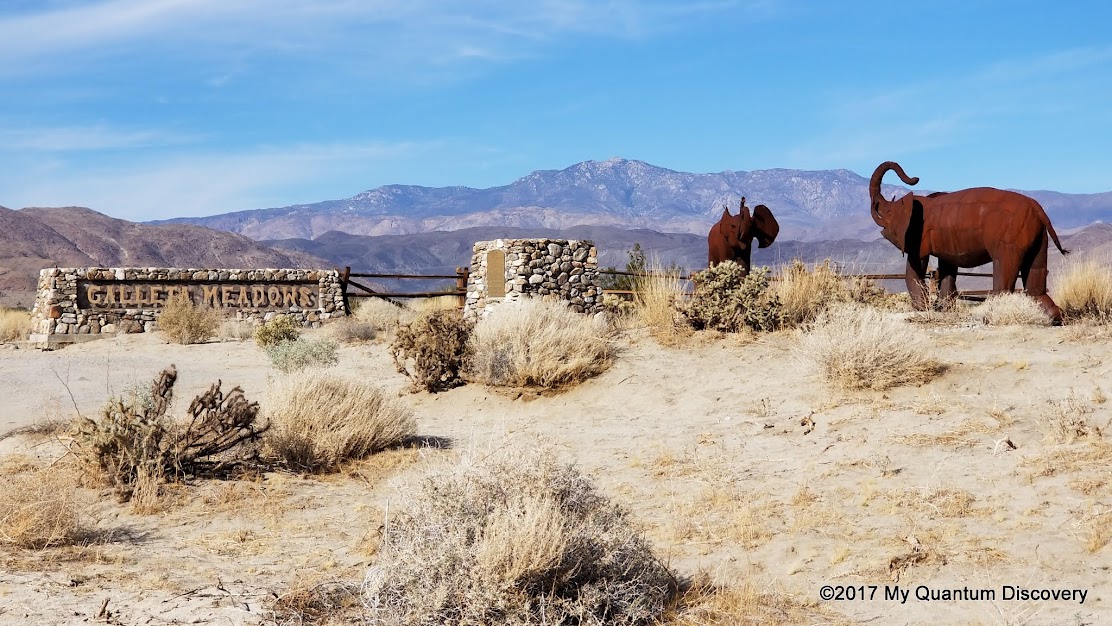 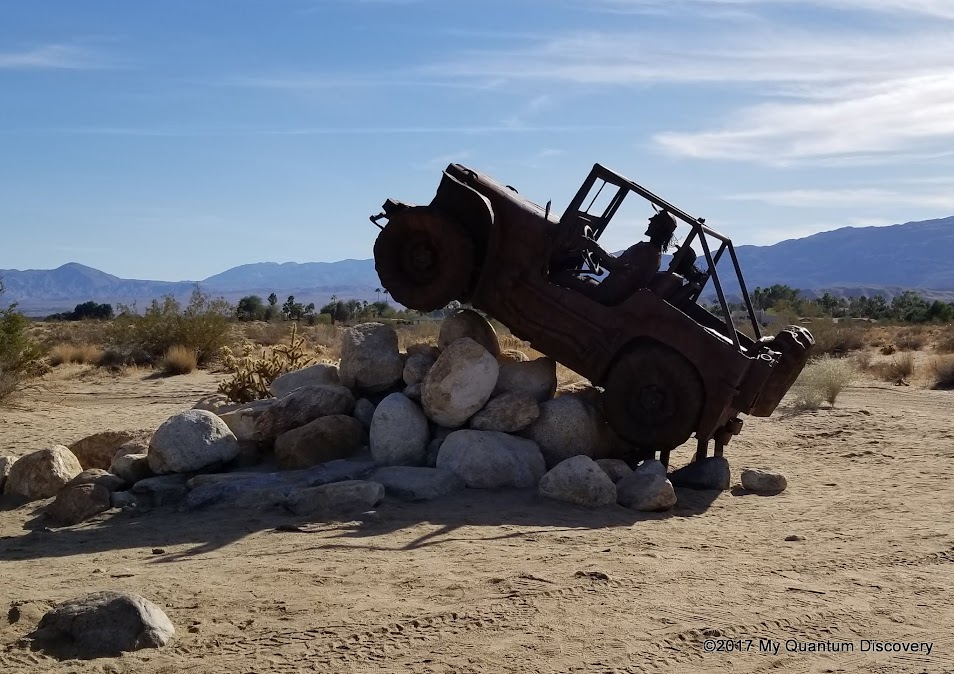 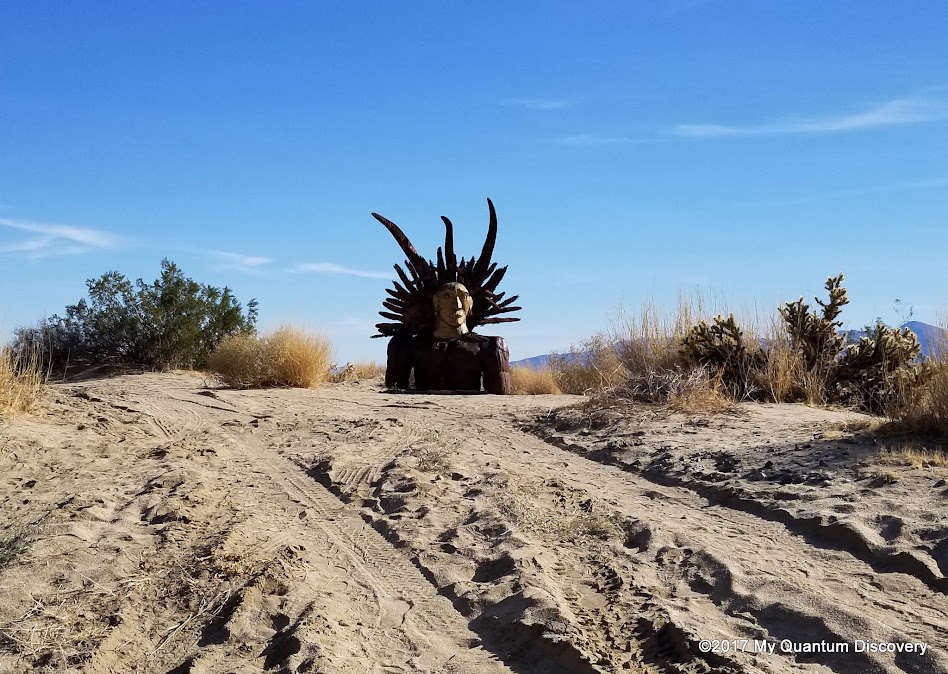 We didn’t see all 130 sculptures but what we did see sure made us hungry so we headed back into town, stopping at the Red Octotillo restaurant for lunch. Cute place with really good food! 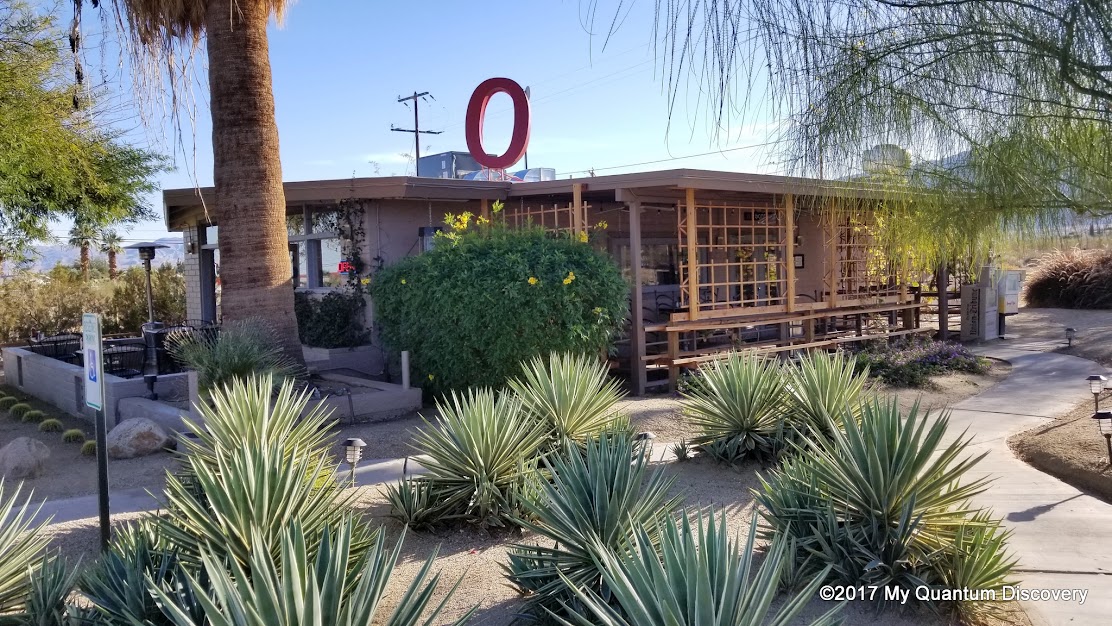 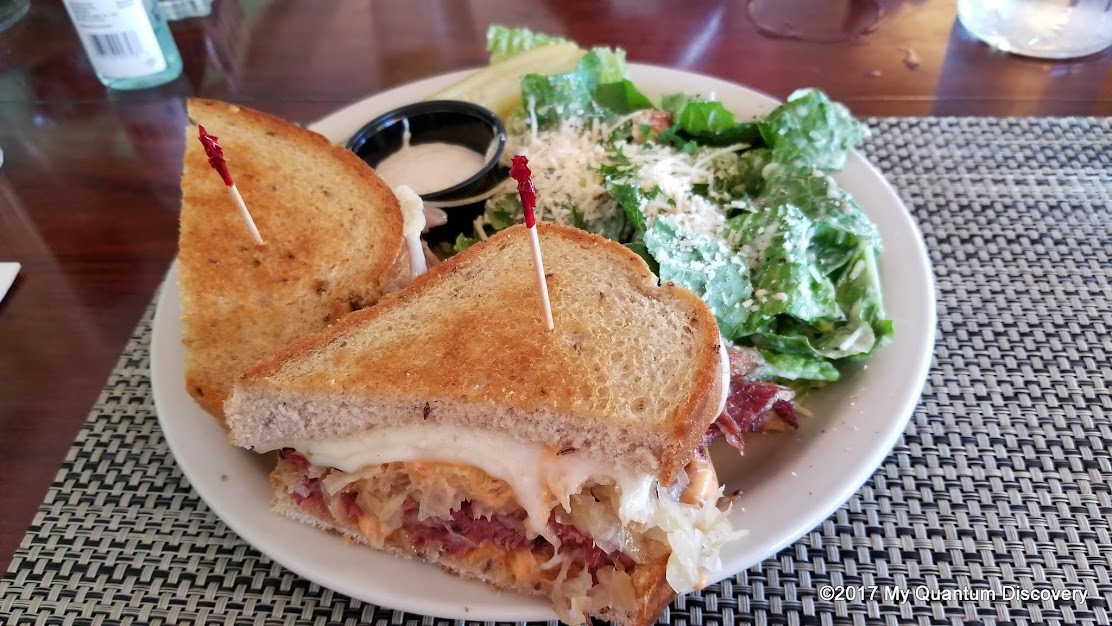 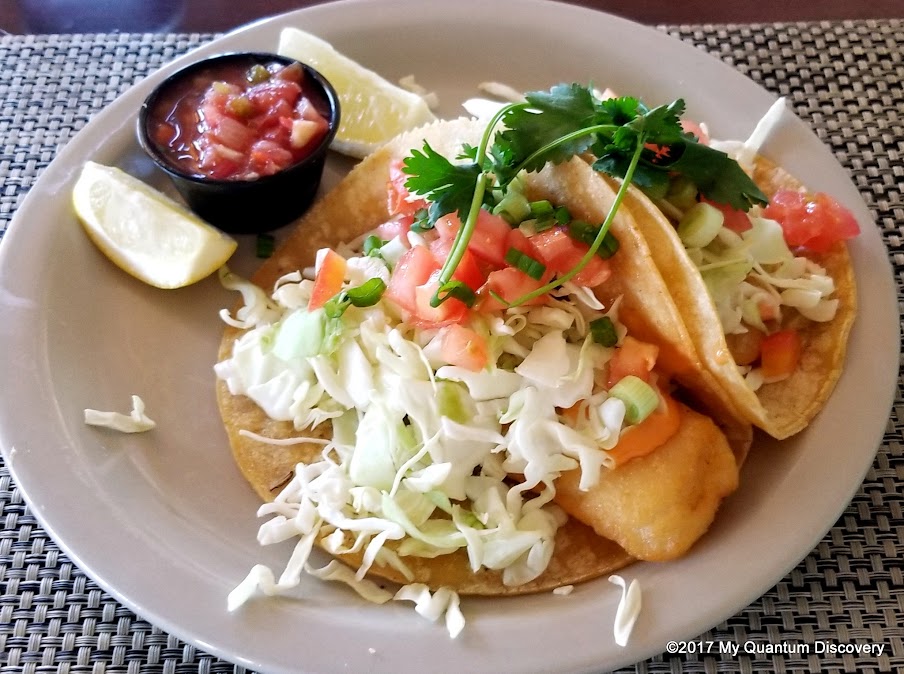 Although it was mid-afternoon by the time we finished lunch, our day wasn’t done yet. Erosion Road is a 21 mile tour that leads from the Visitor Center east along S-22 through the Borrego Badlands (defined as lands that have no apparent use to humans). We had been given a pamphlet at the Visitor Center which showed various points of interest at numbered mile markers. In some cases it was difficult seeing the marker so we drove right by it without realizing it.

The pamphlet we were given says that “for millions of years, tectonic activity has pulled apart the earth’s crust. Mountain masses move up and around on great fault lines, while weathering and erosion tear them down. This on-going conflict creates land features like canyons, bajadas, playas and arroyos…desert landscapes as colorful as their names!”

At the Borrego Badlands Overlook, we learned that this overlook was the epicenter of the 1954 Santa Rosa Mountains Earthquake which measured 6.2 on the Richter Scale. Big earthquakes are common along the San Jacinto fault zone. Since 1890, it has produced at least 10 earthquakes that reached a magnitude of 6.0 or higher. Gulp…as I was reading I was hoping one wouldn’t happen while we are there! But then we found out that the area receives a few small earthquakes every day! 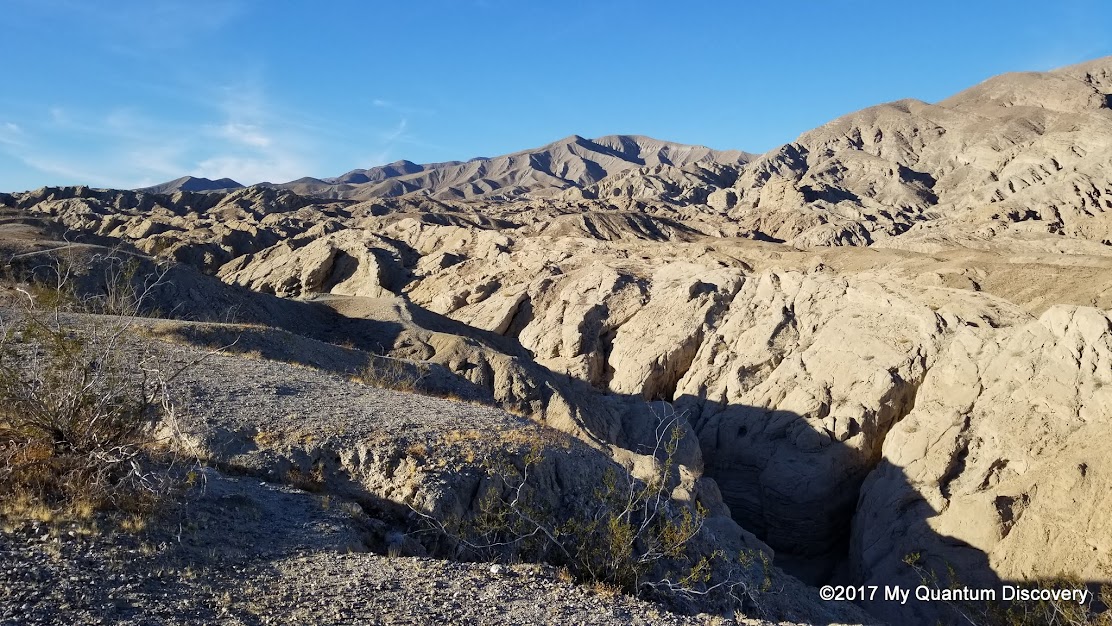 Mile Marker 28 noted Clark Dry Lake as a point of interest. It is a “playa” which describes a temporary lake that has no outlets and evaporates completely. A hundred thousand years ago there was a lake here year round but today heavy rains will create a lake for only a few days allowing tadpole shrimp, freshwater clams and other tiny creatures to come to life. As water flows down the mountain and across the plateau, salts dissolve in the water. As the water evaporates, white minerals are left behind. 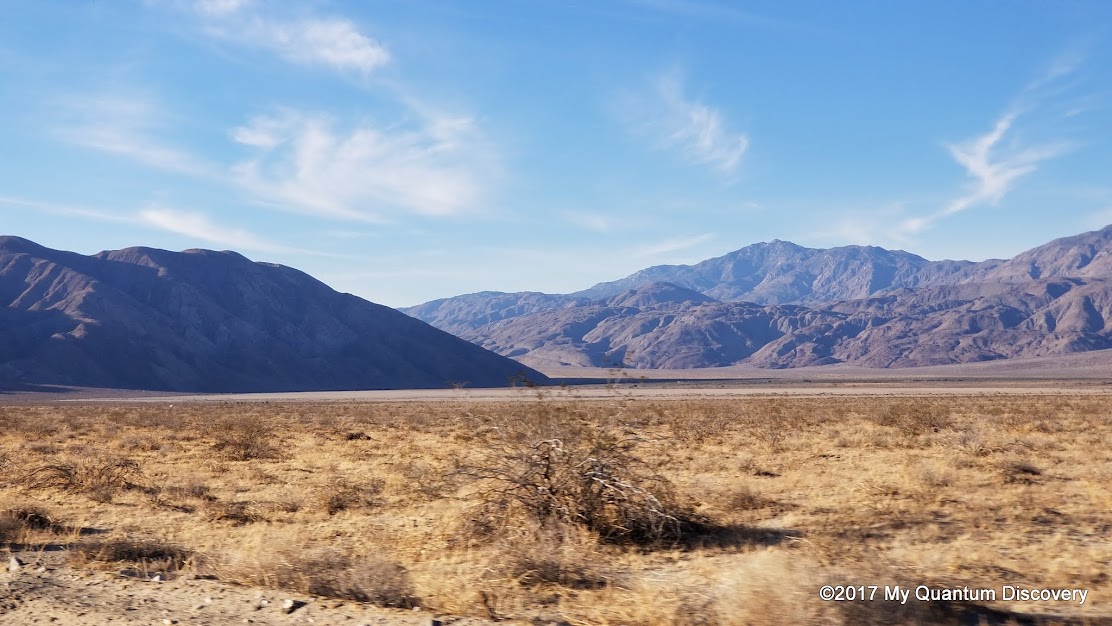 At Mile Marker 38 was the Calcite Mine Scenic Overlook. This is where General Patton’s troops built the original road that leads north from here to the former Calcite Mine, active during WWII, and the top producing calcite mine in North America. The Polaroid Company processed the calcite crystal into optical ring sights for the military.

At that point, it was the end of the tour and time to head back to Rancho for some relaxation after a hard day of sightseeing!