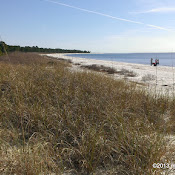 Well, we’re on the move again!  After an enjoyable stay in Carrabelle, particularly exploring and biking on St. George Island, on Saturday, February 22, it was time to pack up and hit the road. 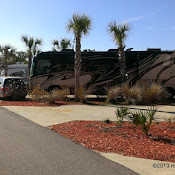 Saturday morning.  Even though we had a 2 1/2 hour drive (123 miles) ahead of us, we weren’t in a hurry to leave so we walked around the resort and across the street to the beach for one last look, snapping a few last photos.

With the narrow roads in the RV park, we were a little concerned about driving the beast out of our site but as usual Rob did a terrific job, not hitting any people, pets, vehicles, shrubs, decorations or anything else on the way out.  Of course, I had gone ahead in the van so I didn’t realize until afterward that he had a very tight turn to negotiate at the end of our street. It was so close that he was quite sure a 45 footer would not have been able to make the turn without hitting something. If you have a 42′ or longer coach we recommend avoiding the west side of the park (where we were) and investigating the options on the east side, which seemed to have larger sites and a bit more maneuvering room. I met up with Rob at the beach parking lot across the street where we hitched up the toad. 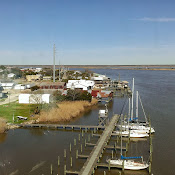 Following US-30/FL-98W, it was an uneventful drive through the historic town of Apalachicola and passing through other small 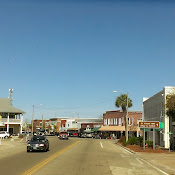 villages along the coast. Although we were driving on a two lane highway, it wasn’t bad until we hit the outskirts of Panama City where we ran into traffic congestion and a lot of stop lights.

Our original arrival time according to the two GPS’s was around 3:45 pm so we were surprised when suddenly our arrival time changed to 2:45 pm, then we realized that the central time zone boundary is west of Apalachacola near Port St. Joe. Very confusing since our phones hadn’t updated yet and were still in Eastern time. 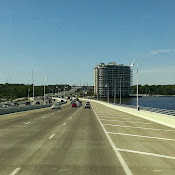 But finally we made it to our next destination, Topsail Hill Preserve also known as the Gregory E. Moore RV Resort. This is another déjà vu for us – we stayed here back in 2012 and loved it, so back in December it was one of the first State Park reservations we made for this trip, booking February 22nd through March 2nd (departing on the 3rd). 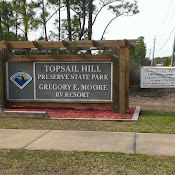 Arriving there around 2 pm, we were instructed by the ranger to drive the coach into the parking lot then come into the ranger station to check in.  After a few minutes, we were back in the coach on our way to our site.

In our post of 2012, we provided details about all the amenities found here so I’m not going to reiterate them here.  If you are interested in the gory details, then you should read that post.

As we have traveled to previously visited places over the last few months, we’ve found that things we liked back then, have in some cases lost their appeal. Perhaps our tastes changed and/or we’re 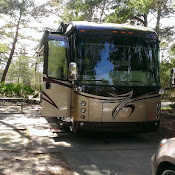 just a little more experienced and/or our expectations are different.

Did our opinion of Topsail change – heck no!  In fact I think this time we liked it even more! Particularly since as FL residents it is now half price for us (about $21)! One thing that did change based on our previous Topsail review was our site preference – back then we favored pull-thru sites because they were somewhat easier to negotiate – now, in many cases (particularly in FL state parks) we prefer back-in sites due to the generally enhanced privacy and spaciousness.

Our site this time was in the “new” section (Palm Drive).  With the relatively wide streets and full cement pads, Rob had no trouble backing into the site except for a couple of low hanging pine branches that brushed the roof.

We love the fact that this park is heavily wooded but that of course, ruins the satellite reception. 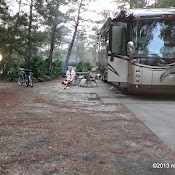 Our roof mounted Trav’ler (DISH Network) could only lock onto satellites 110 and 119 in the western arc, neither of which carries locals or the most popular channels in HD. So out came the tripod mounted dish and after finding a spot at the rear of the site with a view of the western arc 129 satellite we were able to get all our favorite channels including the local broadcast networks in HD. As a incurable DVR junkie, that certainly was good news!

Just as a note, our neighbors at Carrabelle, Denise and Lee, left Carrabelle the day before us – they also had reservations at Topsail.  Their site was only 5 sites away from ours.  What a coincidence! 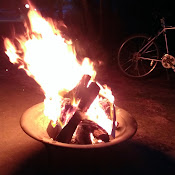 Since it promised to be a nice night, we decided we better take a ride to the campground store  to pick up some firewood ($5 for a small bundle).  Later, we found Publix offered a larger bag of firewood for about the same price. There are no fire rings at Topsail but they do allow campfires if you bring your own screen covered fire pit and keep it on the cement pad. In fact, we had bought our portable fire pit at a Target store in Destin when we were here in 2012.

That night we enjoyed a quiet evening by the campfire!

Stay tuned for our activities at Topsail….