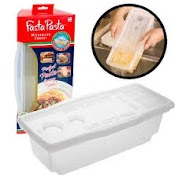 When a friend first told me about the Fasta Pasta Microwave Cooker, I figured that it was just another gimmick, you know one of those “As Seen on TV“ type of products whose simple claim to fame seemed to be that you can cook pasta easier and faster than 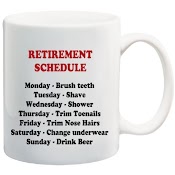 using the old tried and true method of boiling a pot of water on the stove.

Aw c’mon now, how hard is it really to cook pasta? And do I really care if it cooks 5 minutes faster? Really am I on that much of a schedule? NOT! I am retired after all. It’s not like I have screaming little kids and an impatient hubby wanting dinner on the dot of 6 p.m.

But besides all that, I admit it, I’m not a huge pasta lover (so why did I marry an Italian dude?) and being the somewhat lazy sort that I am, it does sometimes seem like a pain in the neck to cook pasta. Perhaps it was that often my pasta was 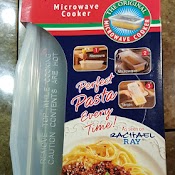 undercooked or overcooked, you know kind of like the porridge in Goldilocks and the Three Bears – it was never “just right”. Nothing worse than pasta stuck to the bottom of the pot. That combined with the fact that I’m a pushover for any type of kitchen gadget, it didn’t take much to persuade me that this gizmo might just make my life a tad easier.

Now to be honest it wasn’t just “the easier and faster” that won me over. It was the fact that it was made of non-BPA plastic, was FDA approved and safe for cooking, dishwasher safe and boasted of easy clean up because you could measure, cook and drain all in one container. Certainly more than enough justification for my spending a whopping $14.95 for a 11.5″ x 5.6″ x 3.5″ plastic oblong box with a few holes on the lid, big enough to cook enough pasta for four people. BTW since this post was published, one of our readers (thanks, Alice) pointed out that they now sell a Family Sized Fasta Pasta which cooks up to 8 servings of pasta for $19.95 (comes with a cookbook) which you can buy either directly from Fasta Pasta or on Amazon.

Those of you who are ardent followers (thank you very much btw) of our blog, know that a while ago we retired our two burner propane cooktop installed on our 2013 Entegra motorhome. Retired because I never wanted to use it again! Trying to control the temperature of either burner was downright annoying and frustrating. Despite my DH waving his magic wand in an attempt to adjust the stupid thing, everything cooked on high. The word “simmer” just wasn’t in its vocabulary. I had to babysit everything I cooked but even with that I sometimes still ended up with overcooked, even slightly burned dishes and hard to clean pots and pans.

As an alternative, a single portable NuWave Induction cooktop (my review) used in conjunction with my Magma Nesting Ceramic cookware (my review) became my main source of cooking energy. But as usual there are trade offs to everything. Awesome that temps could be programmed and adjusted in 10 degree increments between 100° and 575° but having only one burner presented challenges making it tough when our menu called for cooking multiple dishes at the same time.

For example, when I would make a big pot of meatballs and sauce (okay I do try to pretend that I have a little Italian blood in me) which would simmer for 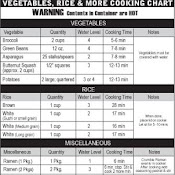 hours on the NuWave but now how do I cook the pasta without the sauce cooling down? Would the Fasta Pasta solve that problem? It became a no brainer as soon as I visited the Fasta Pasta website and viewed the sales pitch as well as their recipes. Wow, not only was this great for cooking all types of pasta in the microwave but it could also be used to cook potatoes, broccoli, asparagus and other veggies, rice and even a chocolate cake. See the cooking times page for full details.

So before I knew it, my fingers were doing the walking on Amazon and voilà within two days (gotta love Prime), this product had found its way into my kitchen.

In case you are wondering, this post was originally written, but never published, when we had our 2013 Entegra. Even though my NuWave is now only used for outdoor cooking and our 2017 Entegra has a built in two burner induction cooktop, I still love the Fasta Pasta and use it all the time!

So was the Fasta Pasta everything it was cracked up to be? Yes, most definitely. I’ve used it a number of times to cook thin spaghetti, angel hair, macaroni and even lasagna noodles. It is so much easier. No waiting a countless number of minutes for a large pot of water to boil, then adding the spaghetti (usually too much for just the two of us), waiting for it to return to a boil, turning on the timer, stirring it to make 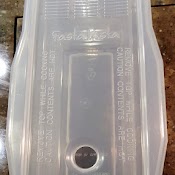 sure it doesn’t clump, watching it and adjusting the temp to make sure it doesn’t boil over, catching a squirmy strand to taste to see if is done properly, then if it is, dumping it into a colander to drain, then serving it. 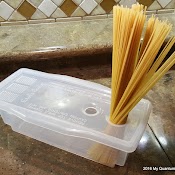 Instead….using the holes on the lid, measuring the correct amount of spaghetti (up to four servings) and placing in the cooker, filling it with water to the appropriate line marked on the inside of the cooker (see instructions), putting it in the microwave (without the lid) and turning it on for the recommended amount of time. Then as they say, “fuggedaboudit”  they mean it – no watched pot here. When the timer dings put the lid on and strain without dealing with squirmy pasta strands. That’s it! Perfectly cooked pasta. Ah yes, the best yet, enjoying my meal knowing that the cooker can just be rinsed off or popped into the dishwasher, no scrubbing necessary. Sure sounds a lot easier doesn’t it?

Now some people might think that you can throw pasta into any microwave type of dish/bowl but having the pasta measure on the lid, the pre-measured water marks and a tight lid with handles to make draining safe and easy, all make it much more convenient and a winning combination.

So in summary, here are the pros:

And of course, there are a few cons:

I’ll definitely be cooking veggies and maybe even the chocolate cake over time and will update this post with my findings, but so far, I like it! The fact that it isn’t stuffed in the back of a storage cabinet and is used frequently speaks volumes about its usefulness for me. Hey if it is blessed by Rachael Ray and Cooks Illustrated, then it is good enough for me too!