Last March we “stood on the corner in Winslow, Arizona“, we stood on the rim of Meteor Crater, we viewed the cave dwellings at Walnut Canyon and we visited the Petrified Forest and Painted Desert National Parks. We thought we had seen just about everything of interest in the Winslow, AZ area.

But one thing we skipped was a visit to the La Posada Hotel. Sure, we drove by it, we snapped a 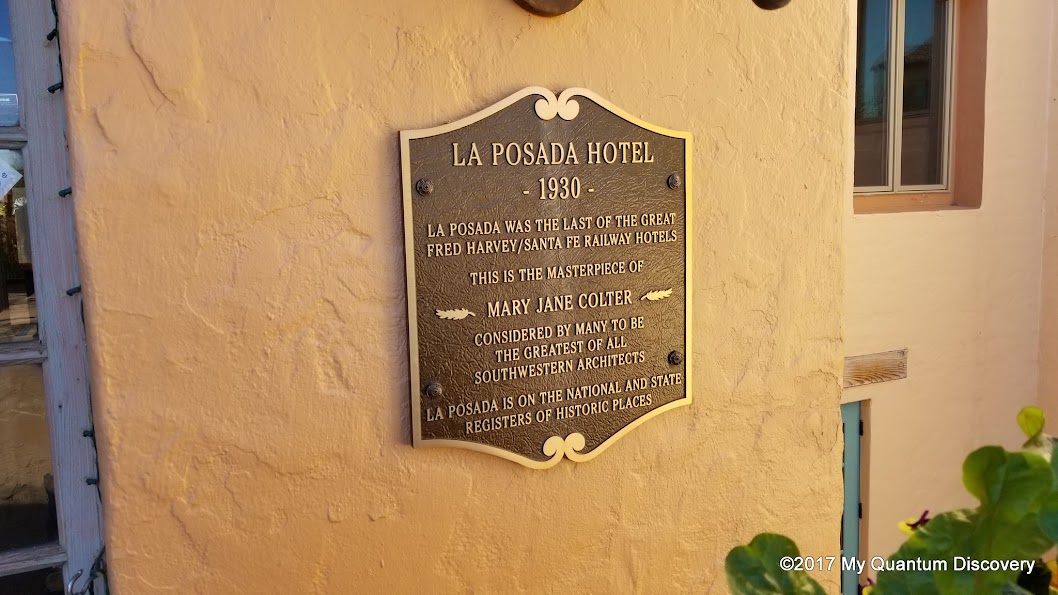 few pictures of the exterior of the hotel but then we continued on, never realizing what a treasure trove of history and artwork existed inside.

But fortunately during our stay at Homolovi State Park, the excellent reviews of the Turquoise Room Restaurant & Martini Bar enticed us to go there for breakfast. Little did we know that our breakfast would turn into a half day visit to this incredible and fascinating historic hotel.

First a little bit about the history….

Built between the Sante Fe Railroad tracks and Route 66 in 1930, opening just after the 1929 stock market crash, La Posada was the last of the Santa Fe’s great railway hotels. Built on sixty-five thousand square feet of solid concrete and steel, on 6 acres of landscaped grounds, it was designed by Mary Jane Colter and the Fred Harvey Company which was the operator of the famous rail stop Harvey House restaurants. 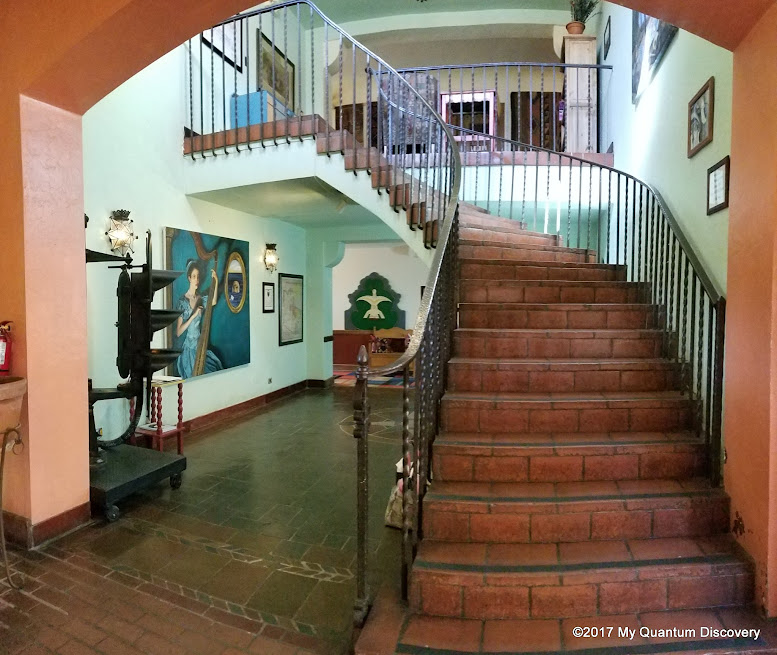 grounds and furnishings rumored at $2 million (about $40 million in today’s dollars). The hotel, and the depot, combine elements of the Mission Revival and Spanish Colonial Revival architecture styles with adobe walls,  roofs of red terra cotta, and windows with wooden shutters and iron rejas (grilles).

Designed for the railroad traveling public, the original front door faced the railroad tracks to the south. Because it was thought that most guests would arrive by train and stay for several days, the Harvey Company made day tours available. Apparently the hotel was the embarkation point for those wishing to see what was then called the “Indian lands”.

Colter was one of the country’s first female (and brilliant) architects at the time, designing many other landmark buildings, most notably at the South Rim of the Grand Canyon National Park. Anyone who has been there is familiar with her name and her work as she was the designer of the Hopi House, Hermits Rest, Lookout Studio, the Desert View Watchtower, Bright Angel Lodge and Phantom Ranch. She also designed the Harvey House restaurant at LA’s Grand Union Station (which has recently been restored and renovated) and the Painted Desert Inn in the Petrified National Park. Today, 11 of Colter’s buildings are on the National Register of Historic Places and five are designated National Historic Landmarks. Colter worked for the Harvey Company for 46 years, she died in 1956 at the age of 88. 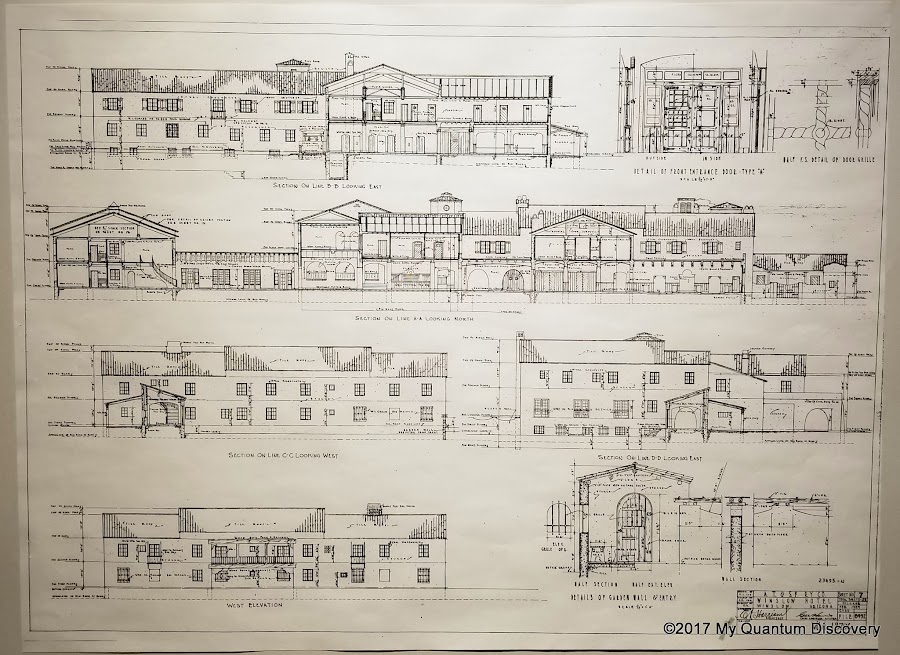 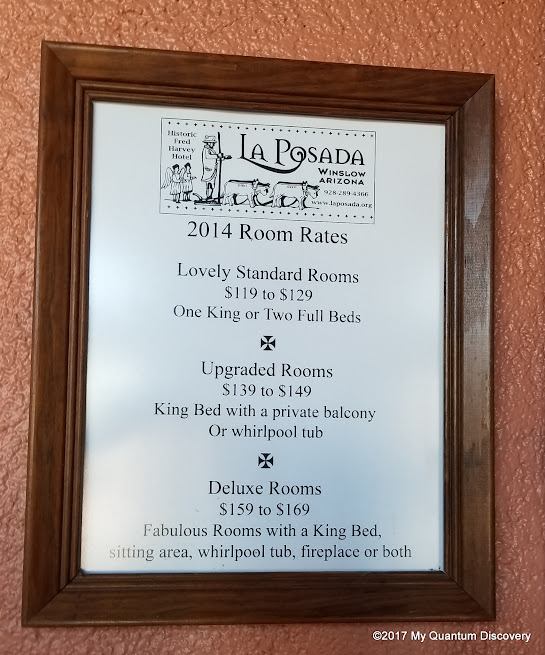 allowed to design or select everything from the structures to the landscape, furniture, maids’ costumes, and dinner china. When finished the 72,000 square foot hotel boasted 70 guest rooms, three dining rooms, a sheltered sunken garden and a greenhouse. During its heyday, it was a popular destination spot for the Hollywood jet set as well as other important figures in politics, science and aviation. John Wayne, Betty Grable, FDR, Amelia Earhart, Albert Einstein, Howard Hughes, Gene Autry, Frank Sinatra, Jackie Gleason and many others were among the celebrities who stayed at the hotel. Today, the 37 fully restored guest rooms are named for many of the guests who stayed there.

Guess all good things must come to an end however, with declining railroad travel, the hotel was closed in 1957 by 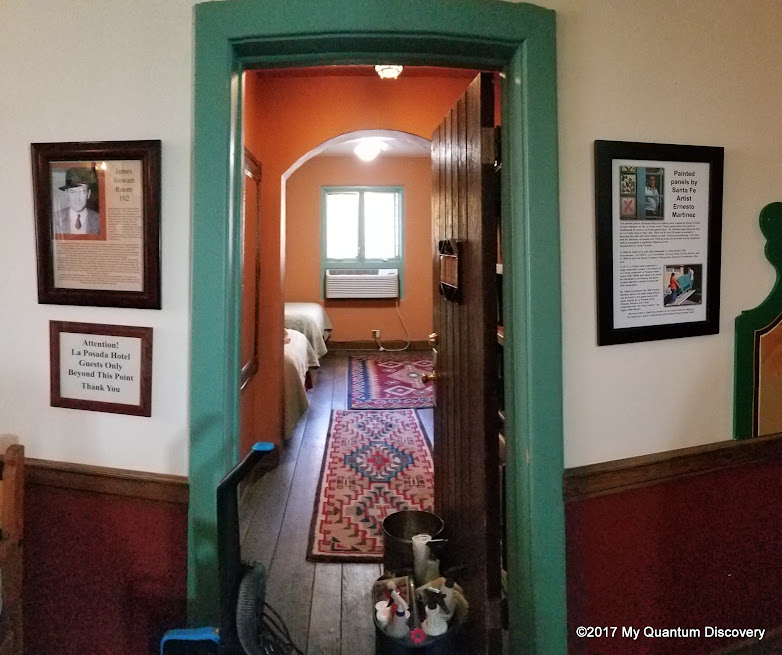 the Santa Fe railroad and by 1959 the museum quality furnishings had been auctioned off and the interior gutted so the building could be turned into offices. Later it was abandoned and at one point slated to be demolished.

But thankfully this historic inn was saved in 1997 when Arizona entrepreneur, Allan Affeldt and his wife Tina Mion, an American contemporary artist, purchased the property from the Santa Fe. He then proceeded to sink an estimated $12 million into restoring this jewel to its former glory, earning it many awards such as being named one of the top 20 hotels in the Southwest by Conde Nast Traveler in 2017. Since then, Affeldt has bought and restored The Plaza Hotel and hopes to restore the Castaneda Hotel, another Harvey hotel, both in Las Vegas, NM. Guess a visit there will be in our future! 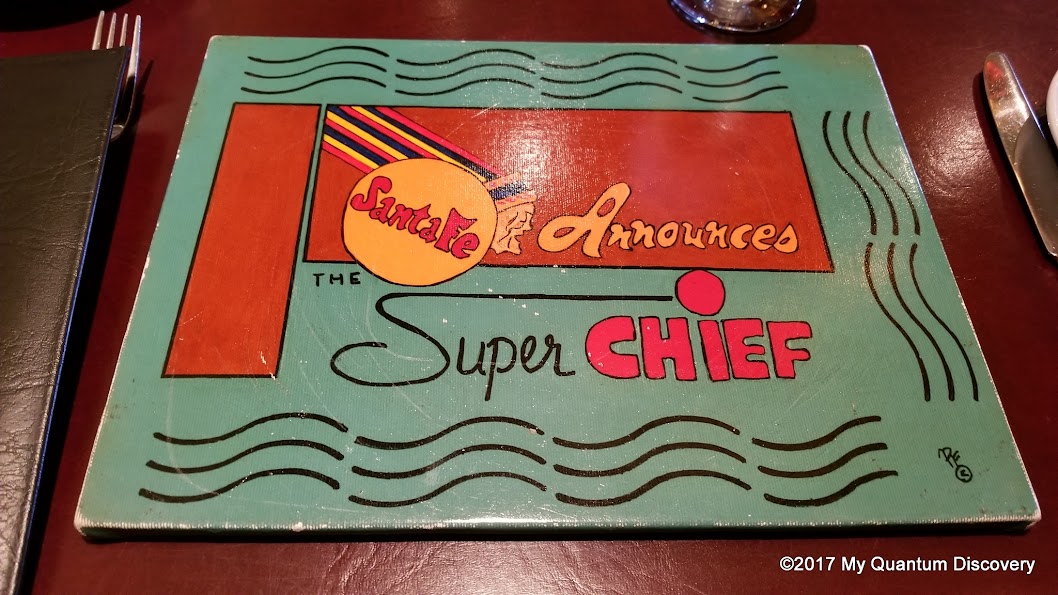 Anyway, from the minute we walked through the gardens adorned with whimsical metal sculptures and a water garden we were impressed. And even more so when we were seated at our table in the Turquoise Room Restaurant which is named after the private dining car designed by Colter on the 1936 Super Chief that ran between LA and Chicago. Opened by Chef John Sharpe and his wife Patricia in 2000, it features contemporary Southwestern Cuisine and is considered one of the finest restaurants in Arizona. 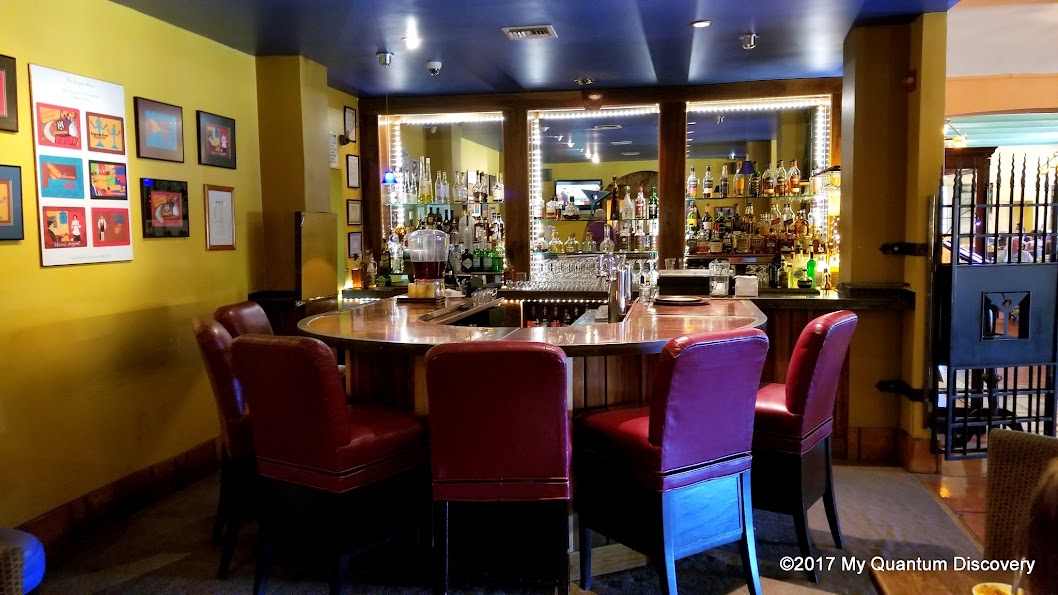 Oh my, if the food is as good as the decor and ambiance, we knew we would be in seventh heaven! What a gorgeous dining room!  As we sat down, neither one of us knew where to look first. The turquoise beamed ceiling, the eight Pueblo Deco style hand painted tin and glass 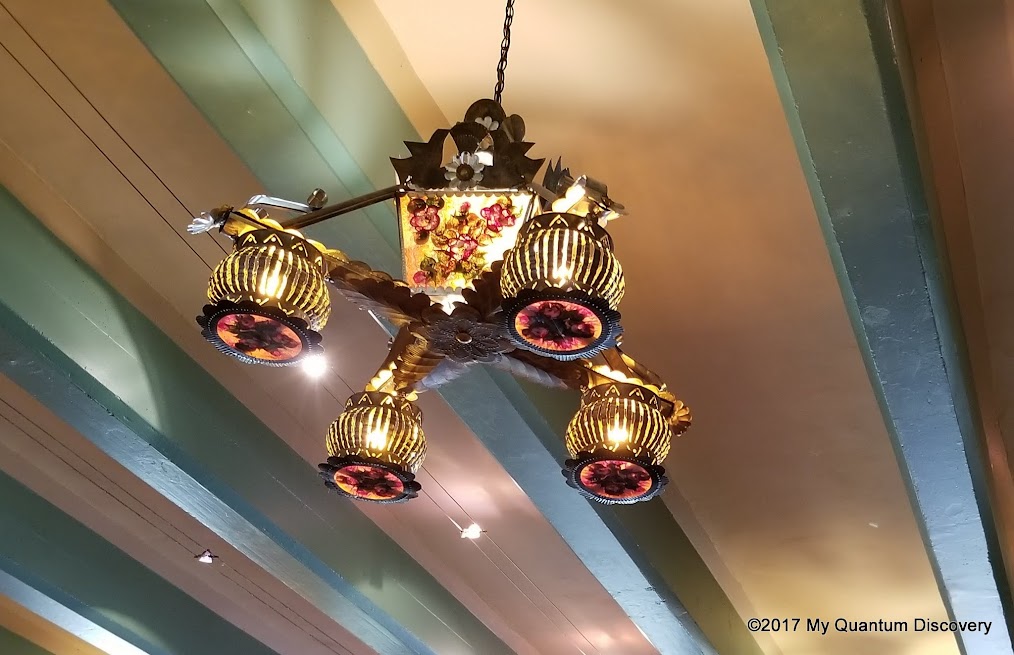 chandeliers (created by master tinsman, Vern Lucero and his wife, Christy), the bright yellow walls, smooth terra cotta floors, hand-painted stained glass panels, the Southwestern hand carved furniture and windows that look out on a wide green lawn and passing trains, it was an extraordinary feast for our eyes. Even the place mats which are Giclée prints of artwork by Patricia Fontaine were unique (on sale on their website at $80 each). Even the servers wore black dresses and white aprons, similar to what was worn by the original Harvey Girls. 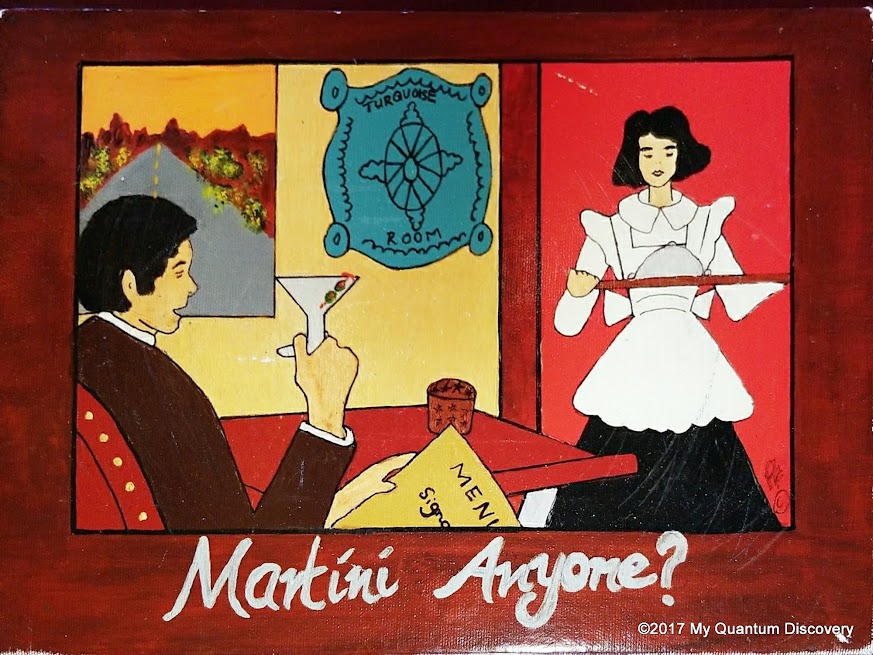 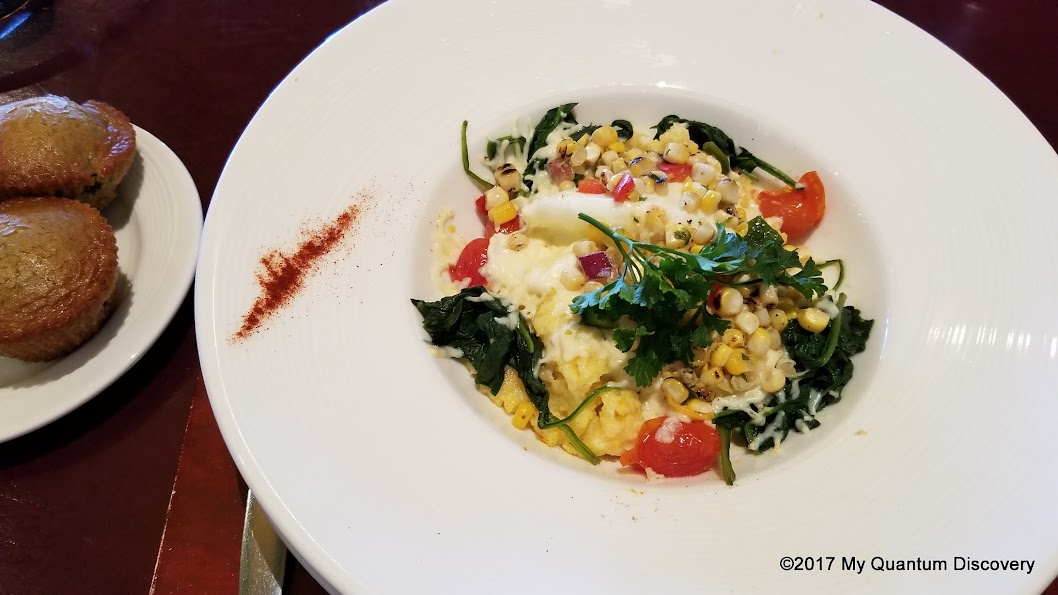 The menu features dishes that are based on retro Fred Harvey dishes as well as the chef’s interpretation of Southwestern Cuisine. Although the breakfast menu wasn’t extensive, there was none of the usual standard breakfast fare here. At the top of the menu, it states “the dishes offered were popular in the east during the early part of the 20th century and then spread to the West through railroad stops.” 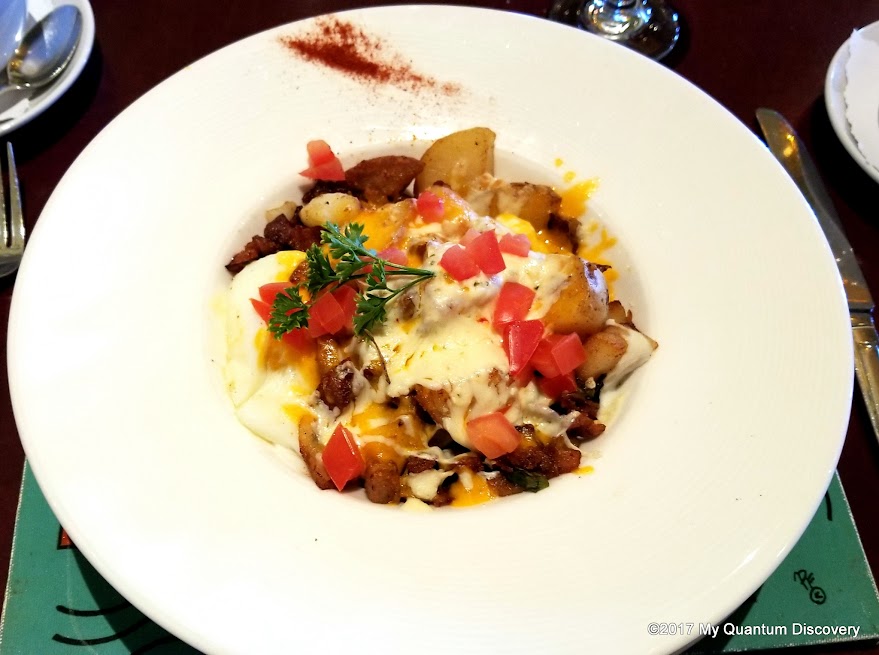 For me, it was the Corn Maiden’s Delight ($12) which was a bowl of warm yellow corn polenta topped with fire roasted tomatoes, fresh spinach, two poached eggs, Jalapeno jack cheese and a fresh roasted corn salsa. Rob had the Boilerman ($13) which was two eggs, breakfast sausage, bacon, onions, bell peppers, potatoes topped with jalapeno jack and cheddar cheeses. Both were served with a choice of La Posada blueberry muffin (our choice), glorious morning bran muffin, Gluten-Free banana nut muffins, English muffin or a slice of White, 12 Grain Wheat, or 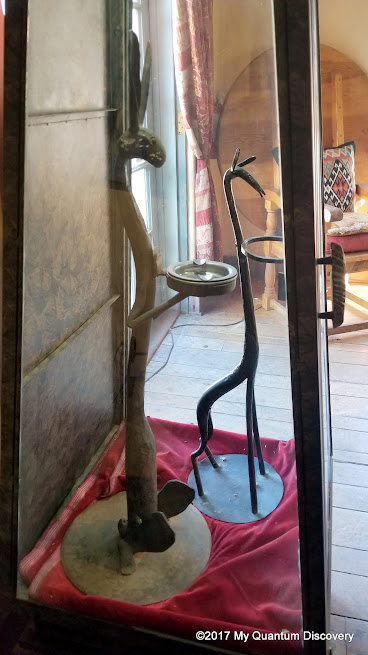 Sourdough toast. OMG, both were absolutely delicious! The rotating seasonal dinner menu looks intriguing, although a little expensive for us, perhaps if I start saving my pennies now, we can go there for dinner sometime! One can only hope….

After breakfast, we rambled throughout the hotel, stopping to read about the history of the various pieces of art, furniture and commentaries on Colter’s vision and architectural style. Although newness was everywhere, it felt like we were taking a nostalgic step back in time. Throughout the hotel there is artwork and sculptures everywhere. Paintings by owner, Tina Mion (including a large gallery of art work on the second floor), sculpture by local artist, Dan Lutzick and furniture and millwork by Keith Mion (Tina’s brother), who restored/replicated what had been removed from La Posada when it closed in 1950. In addition, there is other work commissioned by other artists highlighted on the La Posada website.

In one of the alcoves, we sat enthralled for almost two hours watching a video focused not only on the history of the hotel, it’s abuse and near destruction at the hands of the Sante Fe and its painstaking restoration, but also on the vision of Mary Colter, providing details on everything she did to create her masterpiece. The details in the video pointed out the significance of everything we looked at as we toured the hotel and grounds. It was totally fascinating! If you visit, be sure to take the time to watch it to fully appreciate everything you see there!

Outside we explored the exterior gardens and the original entrance next to the railroad tracks (today there is a new and separate entrance on the Route 66 parking lot side). As we watched a train go by, it was easy to envision what it must have been like so many years ago when the train stopped and passengers disembarked for their stay at the hotel. 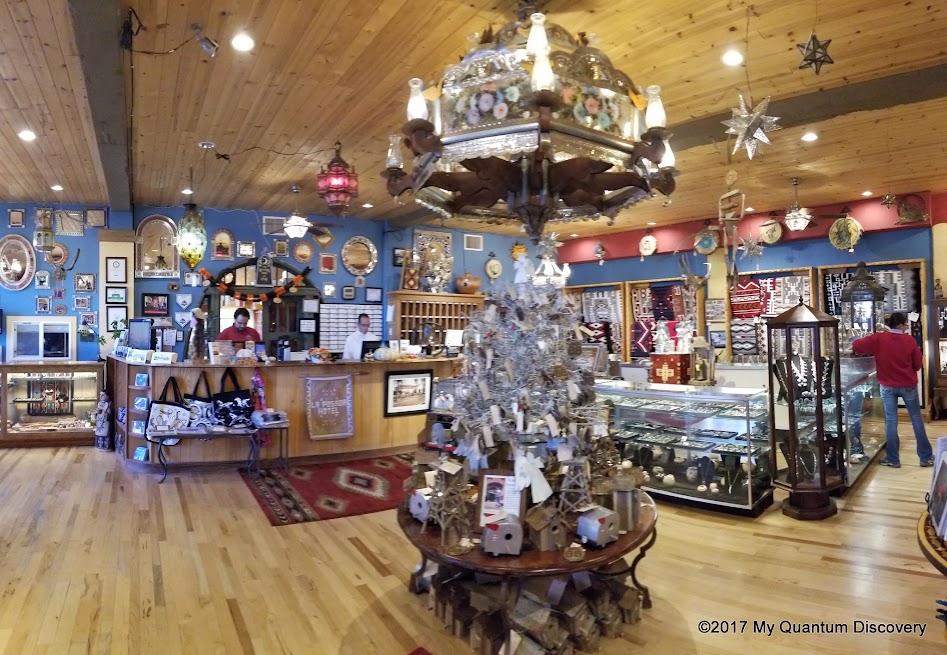 The Trading Post and Reception Area was filled with Southwestern and Mexican jewelry, Native American crafts from Southwestern tribes, Mimbres design replica pottery designed by Mary Colter for all Fred Harvey Hotels, Zapotec Pottery, rugs, nichos mirrors, and many other 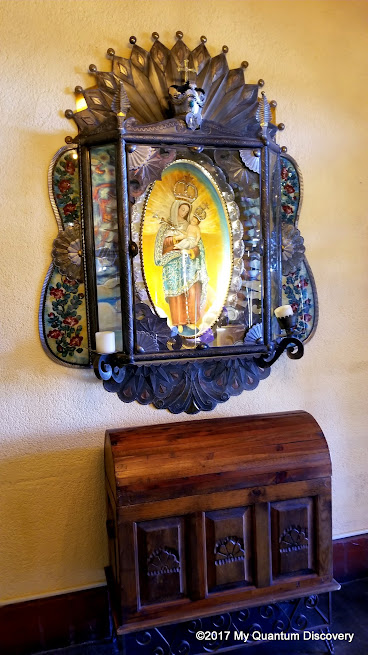 collectibles from the Four Corners and Mexico, Mexican tin and Talavera tile mirrors and hand woven Navajo rugs. Not for sale was the exquisite tin and glass chandelier hanging from the ceiling.

On our way out, we stopped to admire the spectacular Madonna Nicho in the main hallway another fine piece recreated by master tinsman, Vern Lucero and his wife, Christy.

We didn’t know it at the time but there is a 2 to 2-1/2 hour (depending on how many guest rooms are available to view) La Posada tour offered by the Winslow Harvey Girls which gives an overview of the company and the hotel. Tours are available starting at 9am but apparently the best starting time is between noon and 1 pm. By that time most rooms have been cleaned and it’s before many guests check-in. The tours, by reservation only, are open to both hotel guests and non-guests. The cost is $5 per person. For reservations, call (928) 587-2287.

So when visiting Winslow, don’t just “stand on the corner”, be sure to visit La Posada Hotel which has once again reclaimed its crown as the queen of the railway!  Mary Colter would be proud knowing that what she considered her finest masterpiece, despite some bad times, is still a masterpiece decades later! 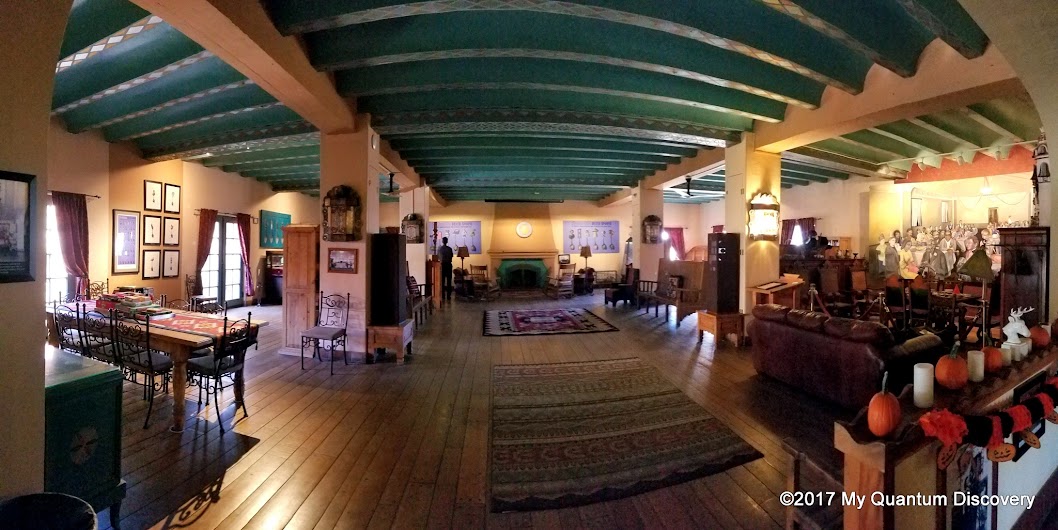 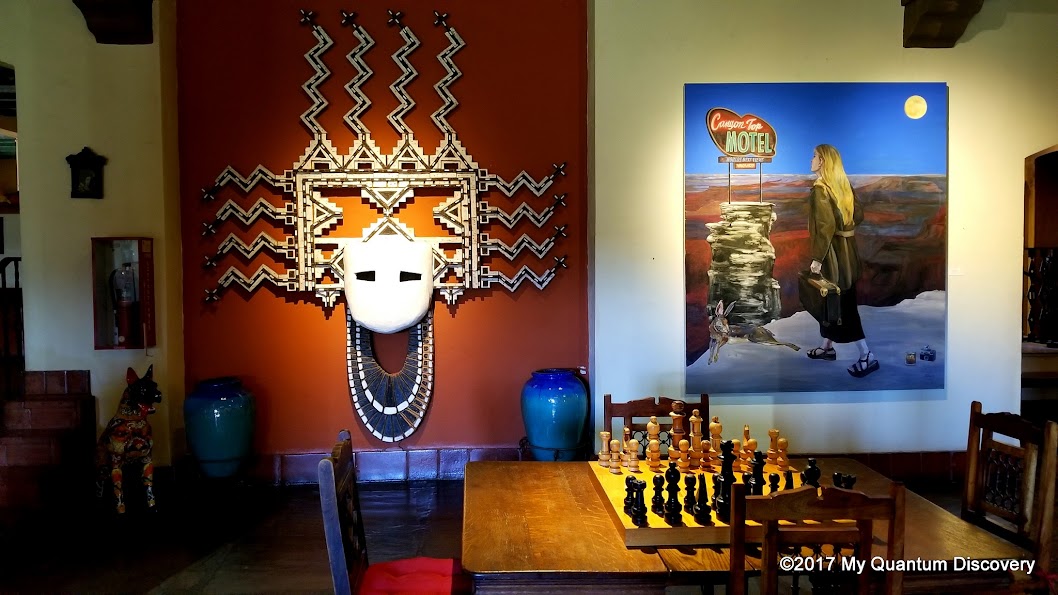 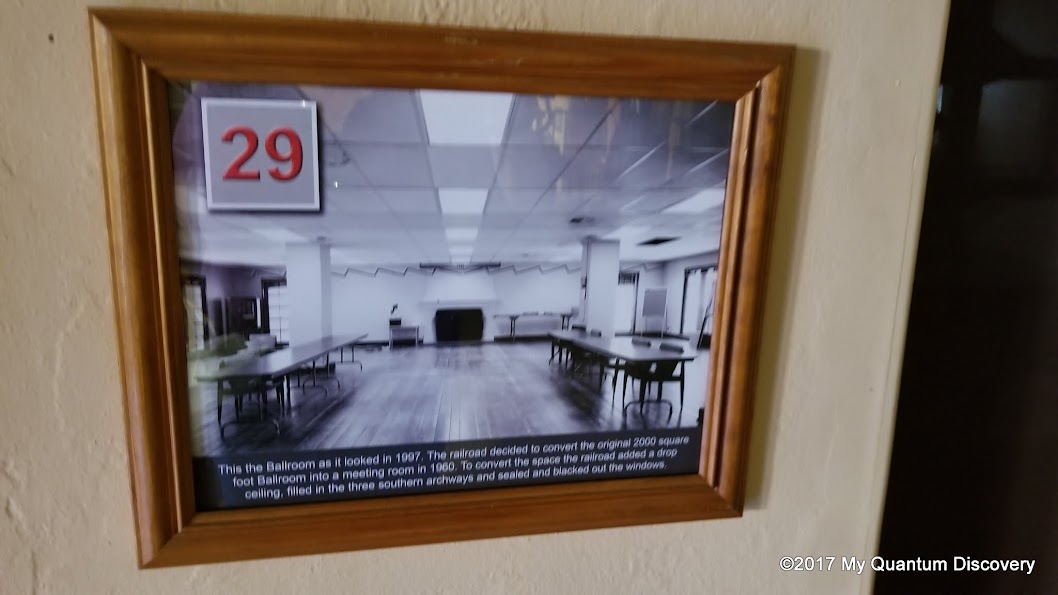 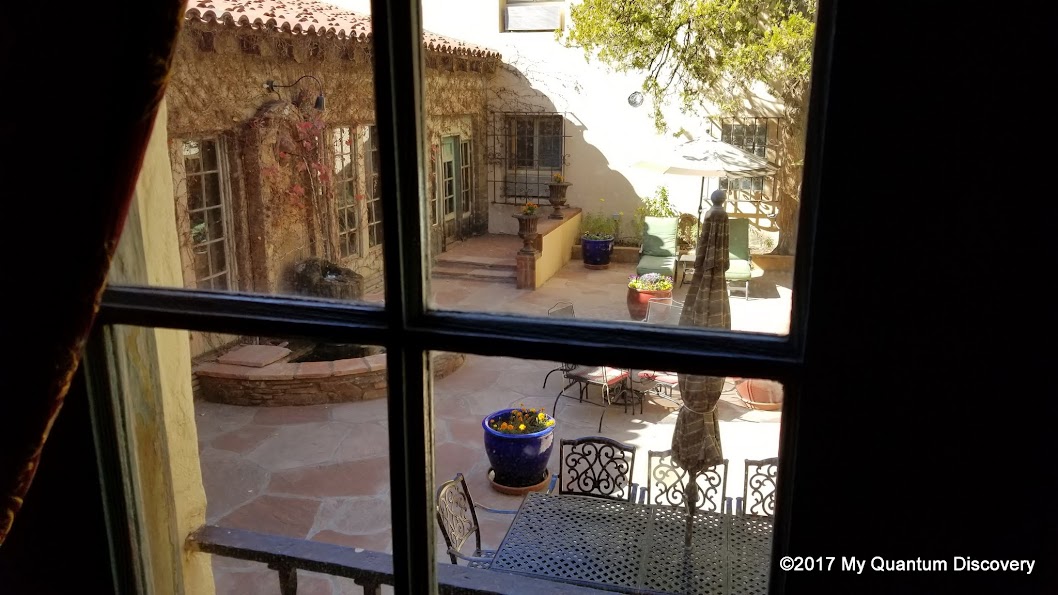