How often do you get to see two man made engineering marvels in such close proximity to each other? We did! All in the same day! 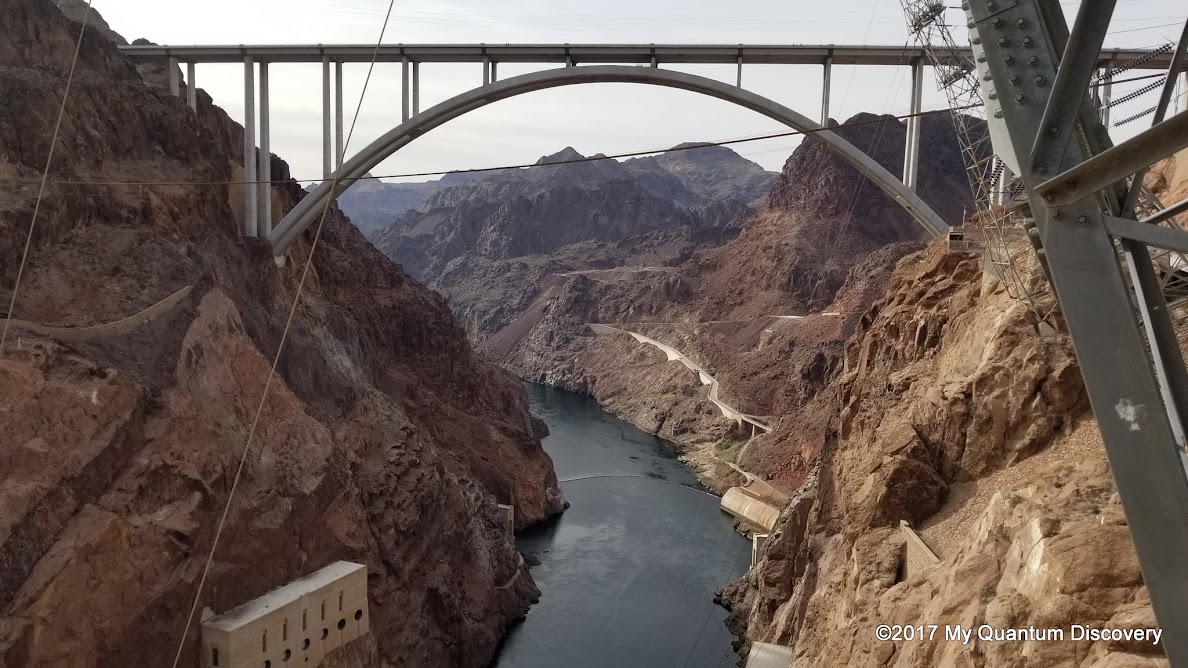 The Mike O’Callaghan-Pat Tillman Memorial Bridge or Hoover Dam Bypass Bridge is an arch bridge that spans the Colorado River between the states of Arizona and Nevada. At 880 feet over the Colorado River, it is the second-highest bridge in the United States and the highest concrete-arch bridge anywhere. Named for Mike O’Callaghan, Governor of Nevada from 1971-1979 and philanthropist and Pat Tillman, who left his career as a football player with the Arizona Cardinals to enlist in the US Army. Tillman was killed in Afghanistan in 2004 by friendly fire.

Since it was completed in 1936 Hoover Dam had become a magnet to an ever increasing volume of tourists, creating a major bottleneck for both vehicles and pedestrians on the two lane road across the dam. Imagine that as many as 16,000 cars crossed the dam road daily causing up to two hour delays. Yikes!  The bridge took five years to complete and opened in 2010 as a key component of the Hoover Dam Bypass project. This project not only rerouted US 93 and eliminated the bottleneck on the dam, but it also removed several hairpin turns and blind curves from the route making it safer for both drivers and pedestrians. Plus it improved overall air quality.

The statistics seen below in the photo are pretty awesome but it’s not until you see it, drive it and even walk across it that you realize how truly incredible this bridge is. 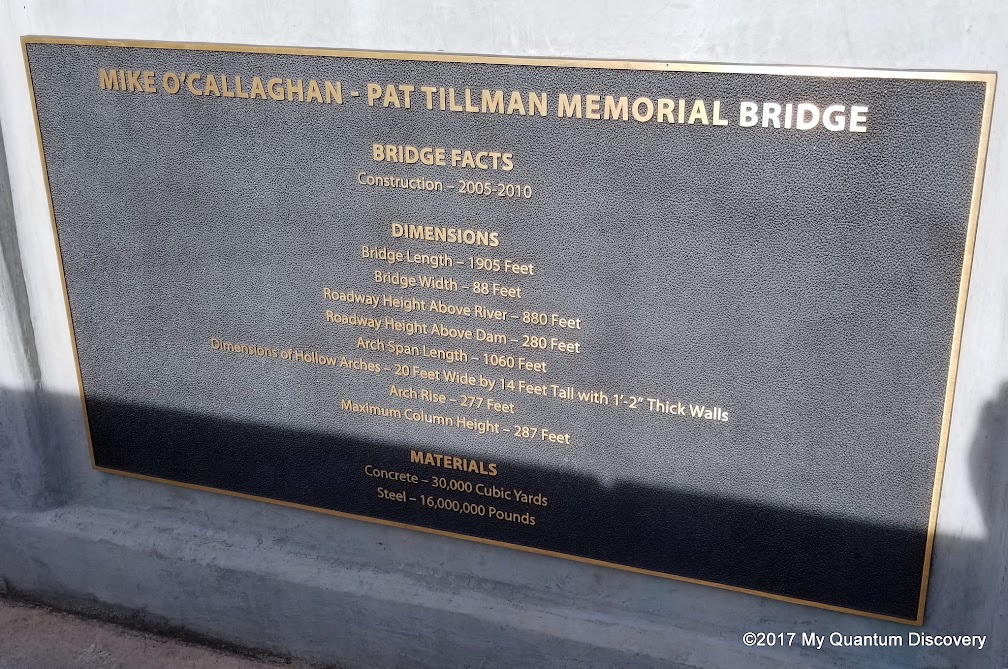 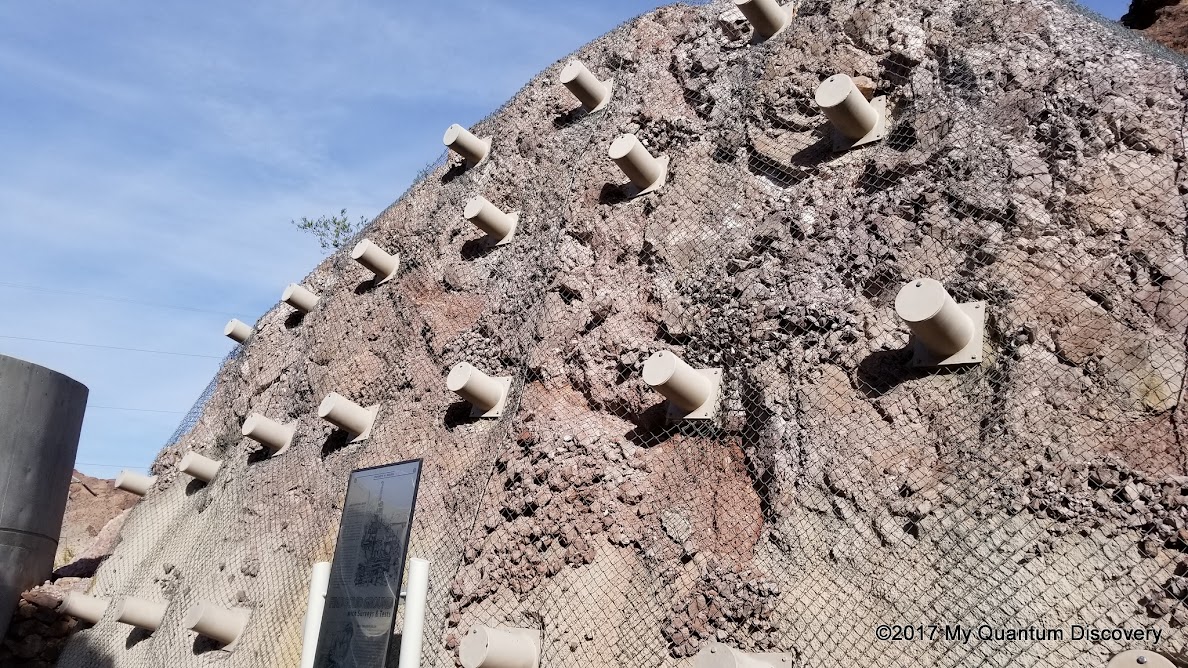 When crossing the bridge by vehicle the awesomeness of this structure and the surrounding terrain is not really visible and goes unappreciated. In fact the side barriers are purposely built to prevent a good view of the canyon and dam! That was probably a smart move as people would be tempted to stop and take in the awesome view.

What is even better though is the specially built pedestrian walkway that spans the entire length of the bridge on the north side (facing Hoover Dam). You can park your car in a free lot on the Nevada side of the bridge. The parking lot is on the way to Hoover Dam on the Hoover Dam Access Road. After parking, follow a walkway (up 70 steps or a series of ramps for wheelchair access) to the bridge to enjoy some truly spectacular and panoramic views of Hoover Dam, the Colorado River, and Lake Mead. At the top, there are three rest areas, with concrete benches and etched panels that describe the building of the bridge and other topics. Several other interpretive signs offer information about the design and construction of the bridge and who it was named for. 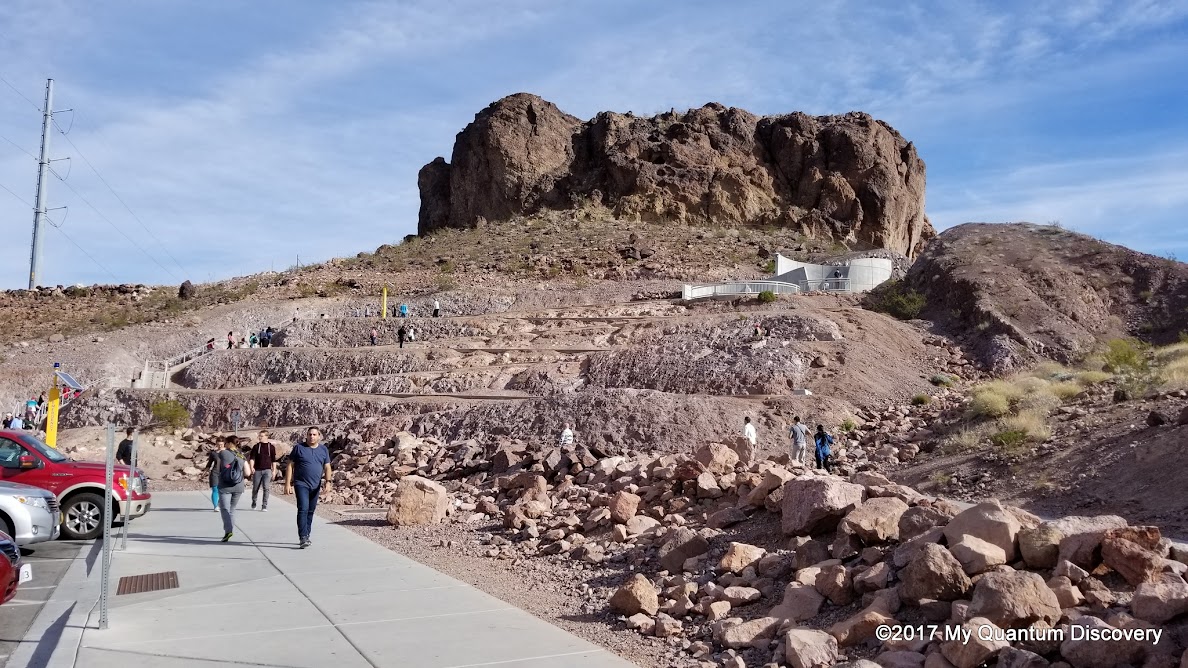 How they managed to build this bridge into the sides of a canyon 880 feet above the river is totally beyond my comprehension. I couldn’t possible summarize or explain the construction information presented along the walkway – that’s okay, I’m not an engineer. But apparently it was quite the engineering feat according to these articles: Hoover Dam Bridge: Top Ten Engineering Facts or this one titled Hoover Dam Bypass: A Historical Construction Feat. This Time Lapse Video may also be of interest. 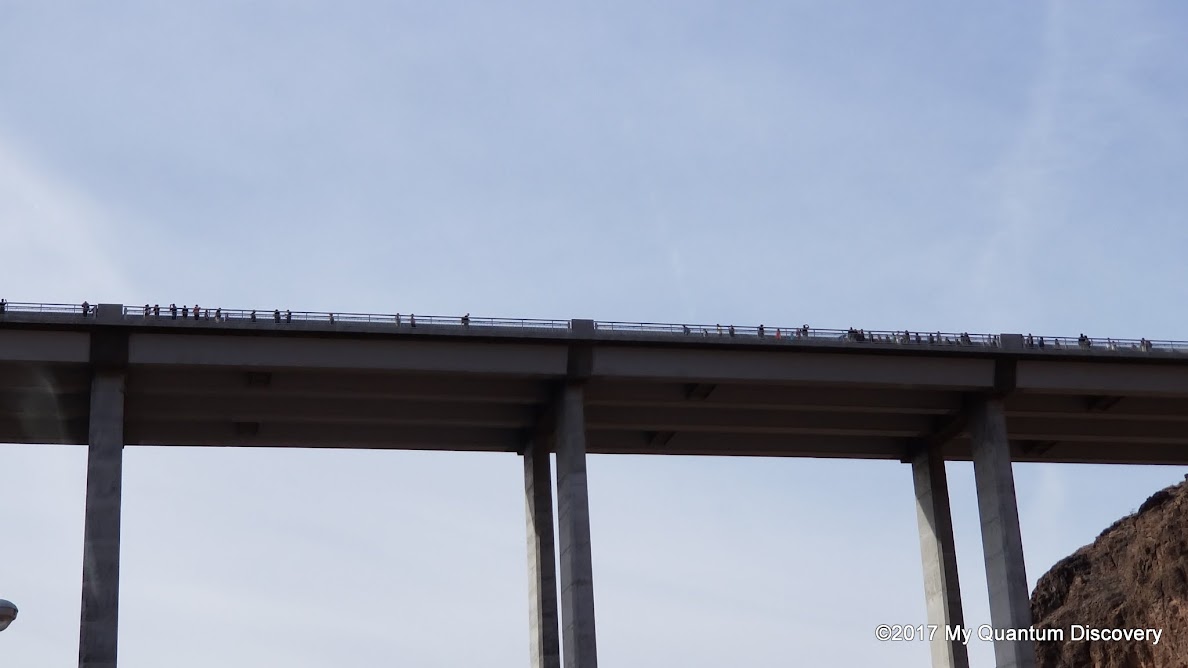 But be forewarned, walking the bridge hovering 880 feet above the river (high enough that it takes nearly 8 seconds for a pebble to fall into the water – if the wind doesn’t blow it sideways) is not for the faint of heart or for those of us who are afraid of heights! It was pretty windy on the bridge as I guess it always is based on what I read – they had to build the bridge to withstand an hourly mean wind of 98 mph with short gusts of up to 125 mph. That along with the cars and trucks whooshing by at highway speeds, the bridge seemed to shake a bit. It wasn’t bad initially but the further we walked it seemed to me that the bridge shook even more. I started to freak out. Coward that I am it was time for me to turnaround, telling Rob to continue his trek by himself but to be sure to take good pictures (he did). 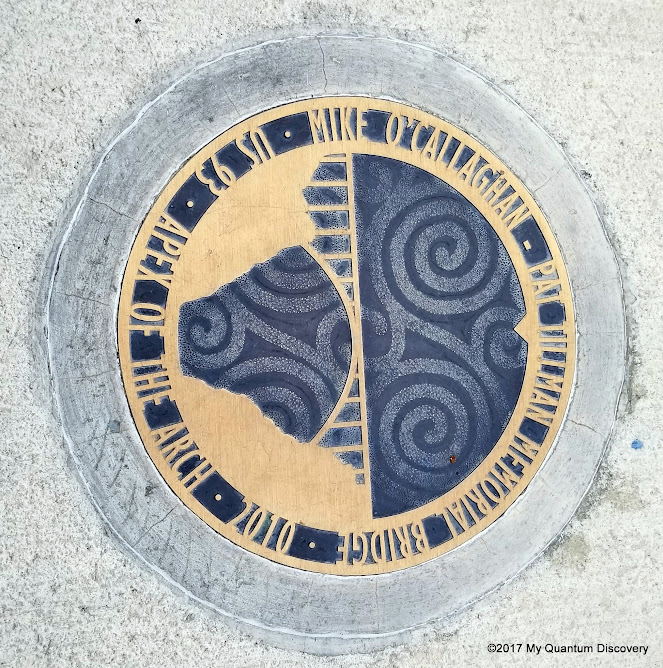 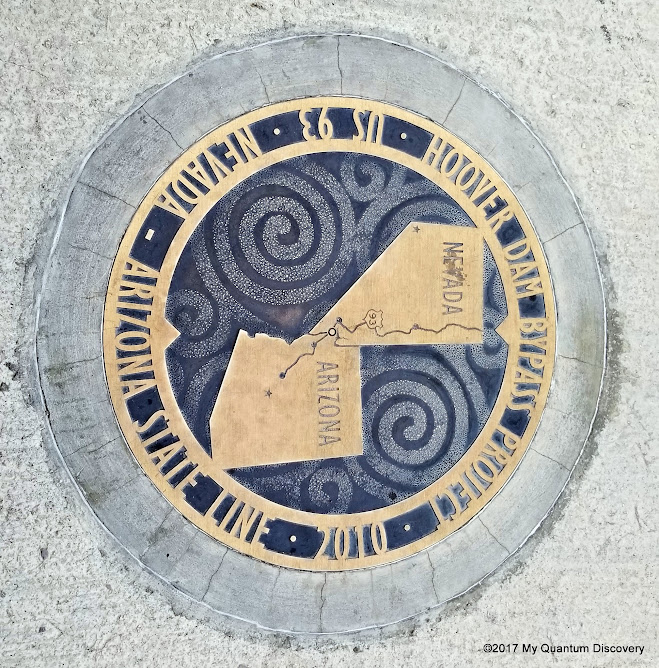 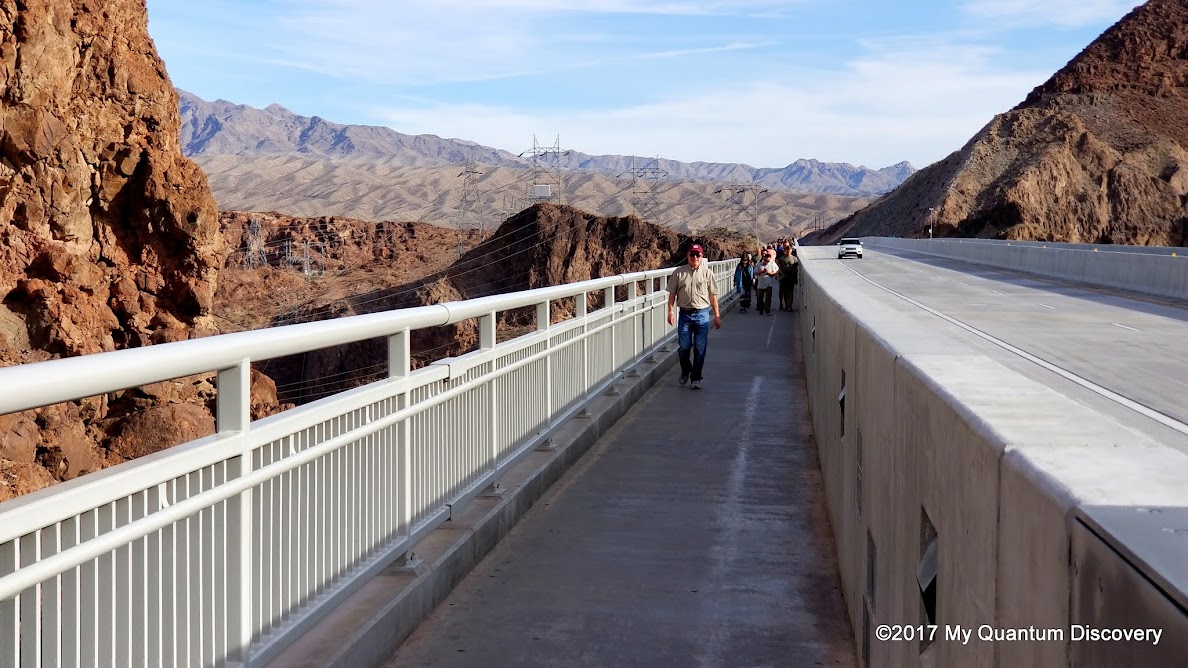 Oh, oh! We suddenly realized that Thanksgiving was early this year and quickly approaching but we didn’t have any reservations anywhere so after enjoying the bridge, we took a ride towards Boulder City and over to the Lake Mead RV Village to scope it out. Lake Mead RV Village has full hookups but was generally kind of dumpy and appeared a little tight for a big rig, but there was a row of newer sites on the edge looking over Lake Mead that were appealing. Also next door to the RV Village is Boulder Beach Campground which is dry camping only. But it didn’t really matter, they were totally booked. Oh well, maybe we’ll be having Thanksgiving dinner in a Walmart parking lot! Note that both campgrounds above are within the Lake Mead National Recreation Area that imposes a $20 entrance fee unless you have a national pass like the Senior Pass. 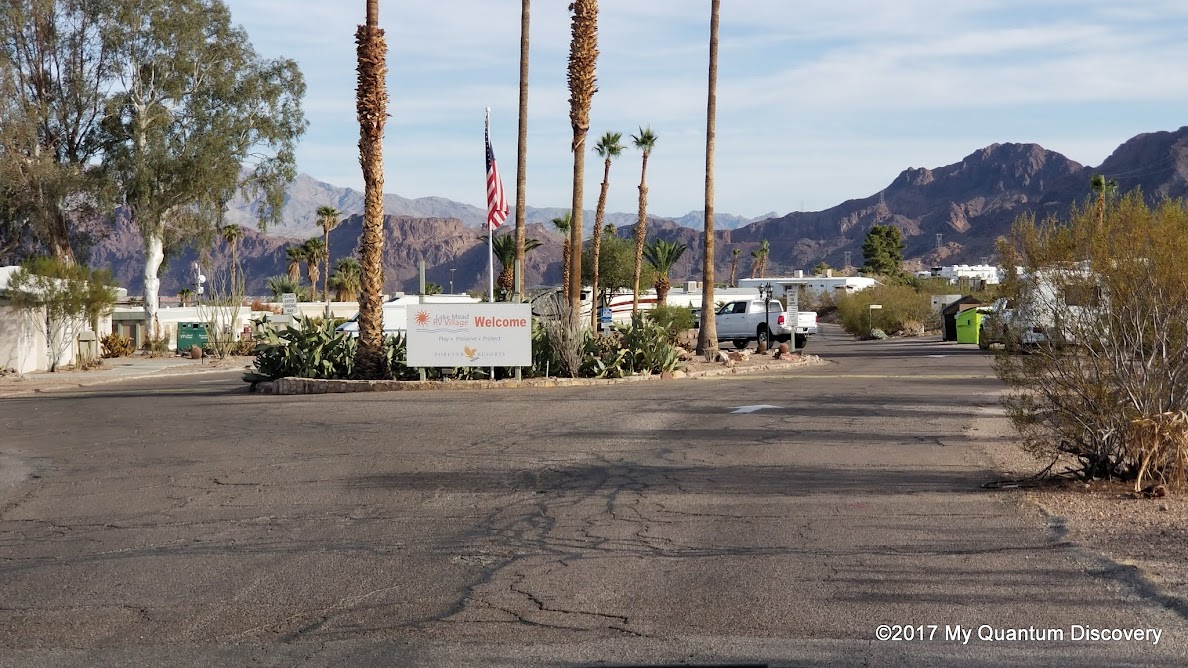 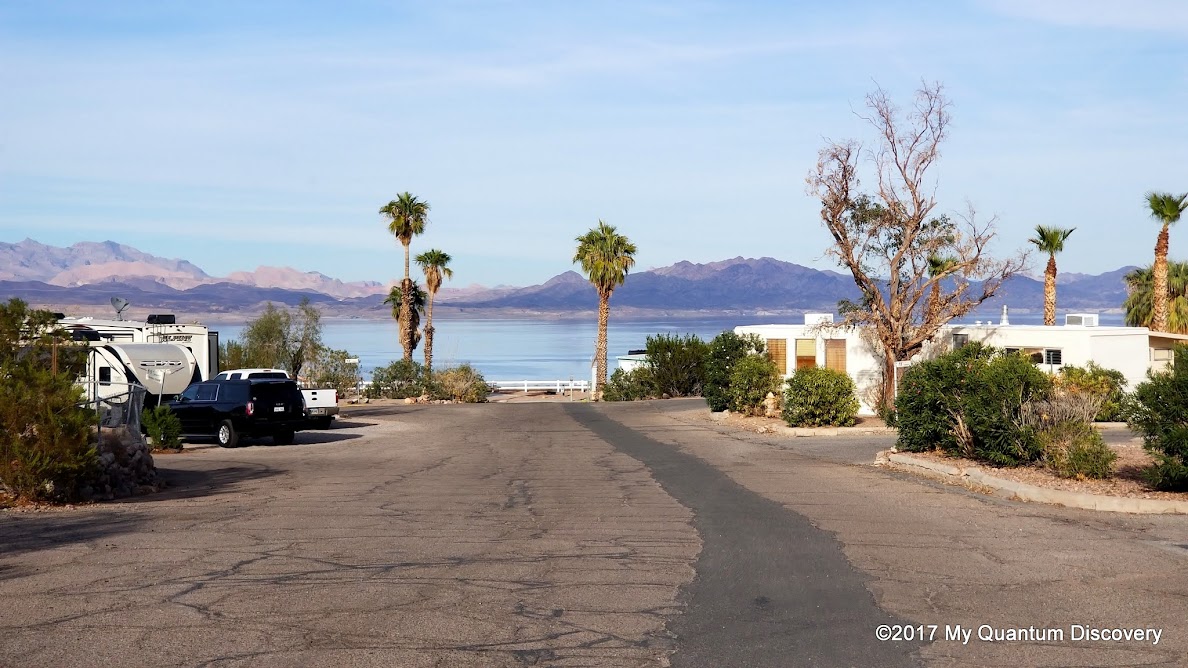 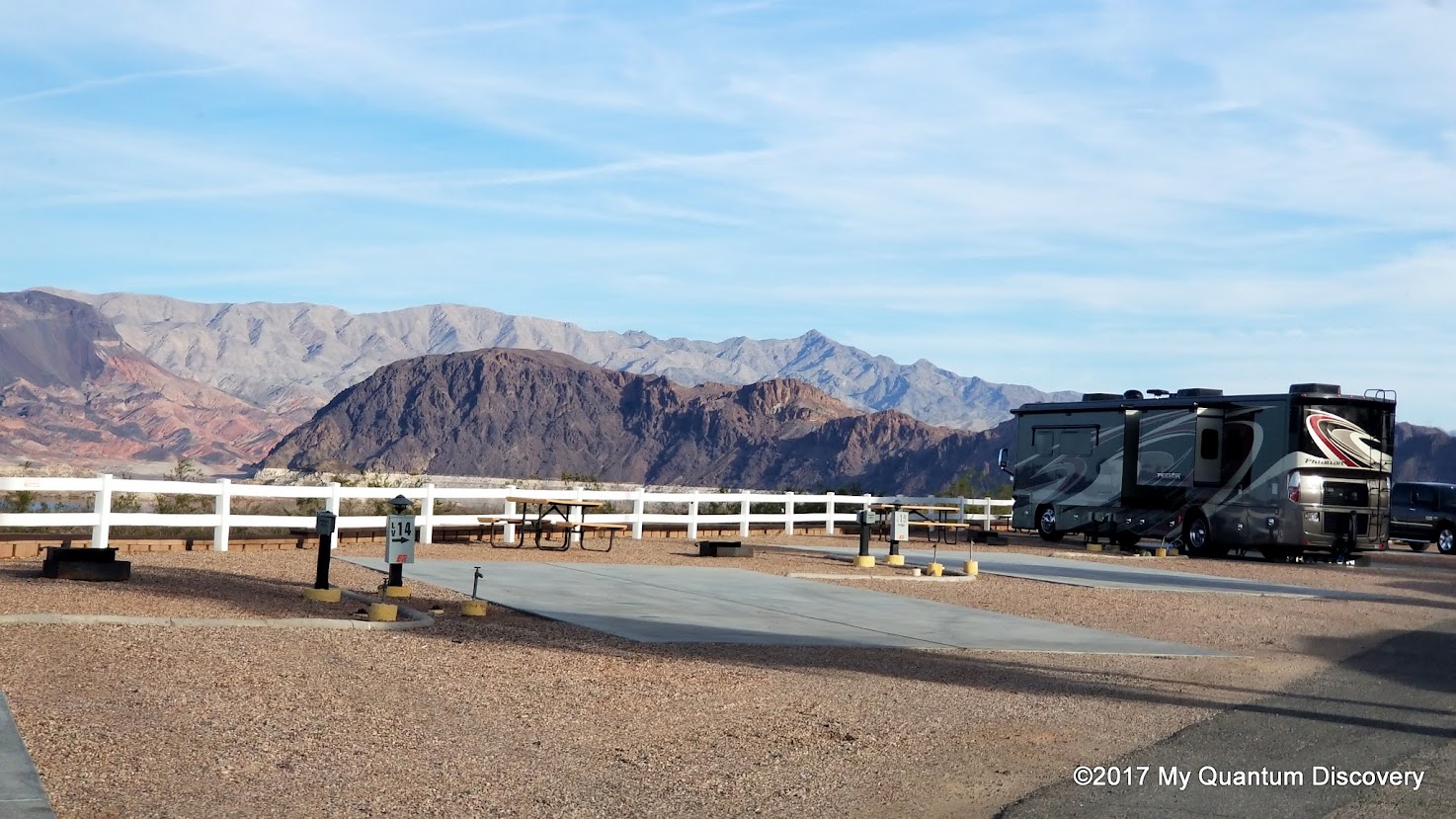 Taking a Hoover Dam tour, exploring the Visitor Center, visiting all the Hoover Dam overlooks, walking the Tillman Memorial Bridge and visiting Lake Mead RV Village made for an exhausting day to say the least! Next time I think we might split our visit into two days, one for exploring the dam and Visitor Center and another to explore the bridge, assorted overlooks and Boulder City. Nevertheless we made it back to Willow Beach and the coach to enjoy the sunset and a campfire. But we weren’t leaving Willow Beach yet – we had one more very exciting adventure! 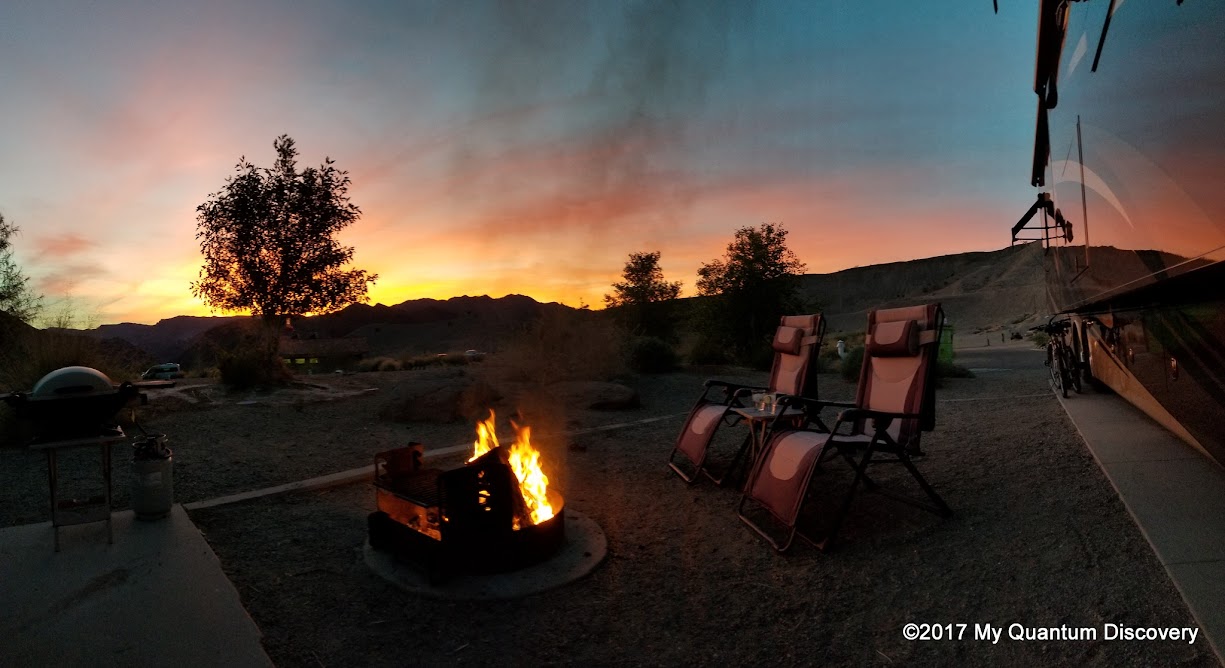