Leaving Winslow, AZ behind us, we headed for our next stop, the Grand Canyon Railway & Hotel  (review coming) for another 2 night stay in Williams, another destination we had been to last March. It was a convenient stopping point, is a decent campground and they offer a half price Passport America rate. 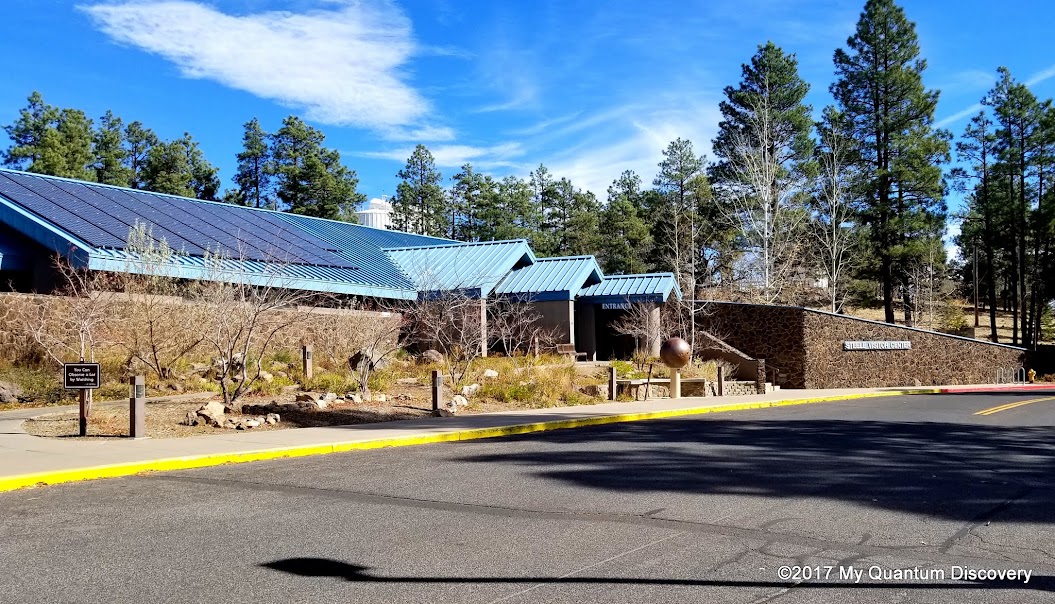 During this visit to the Williams area, besides the usual mundane shopping and laundry tasks, a visit to the Lowell Observatory, located on the appropriately named Mars Hill in Flagstaff, was on our agenda, something we wanted to do last March but never found the time. The facility is open Monday – Saturday 10 am to 10 pm and Sundays 10 am to 5 pm. Forty-five minute tours are offered every hour on the hour between 10 am and 4 pm and include stops at the Clark Telescope, the Slipher Rotunda and the Pluto telescope (this was closed for restoration during our visit but should be opening soon). The prices of the tours are as follows:  Adults: $15, Seniors, AAA, college students: $14, Ages 5-17: $8, Under 5: Free, Members: Free.  The admission fee includes two separate tours (The Story of Pluto and The Lowell Tour given at multiple times throughout the day), Daytime Telescope Activities, Open Houses and Evening Telescope Viewing and Presentations.

Upon arrival at the Steele Visitor Center, we were told that the Story of Pluto Tour, which focuses on Pluto’s history and discovery, had already started but we could join it in progress if we wished at the Rotunda Museum. From the get go our tour guide, Jim, who was very passionate about the subject, had everyone completely engaged, mixing humor with scientific facts and making what could be a very dry and boring subject fun and interesting. But truth be told it really is quite a fascinating story! Later we took the Lowell Tour (again with Jim) which was equally engaging and interesting. 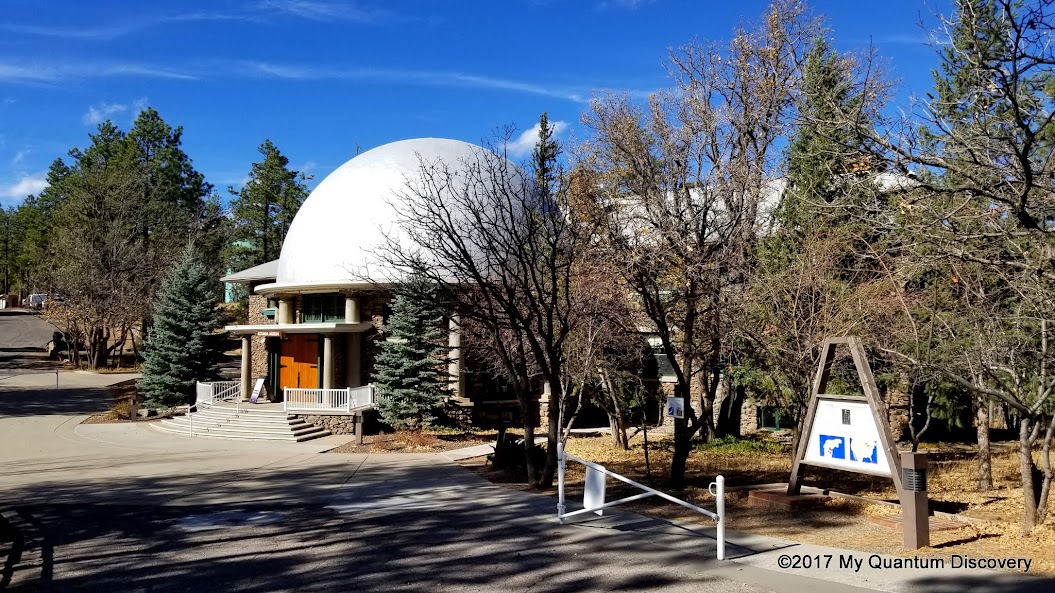 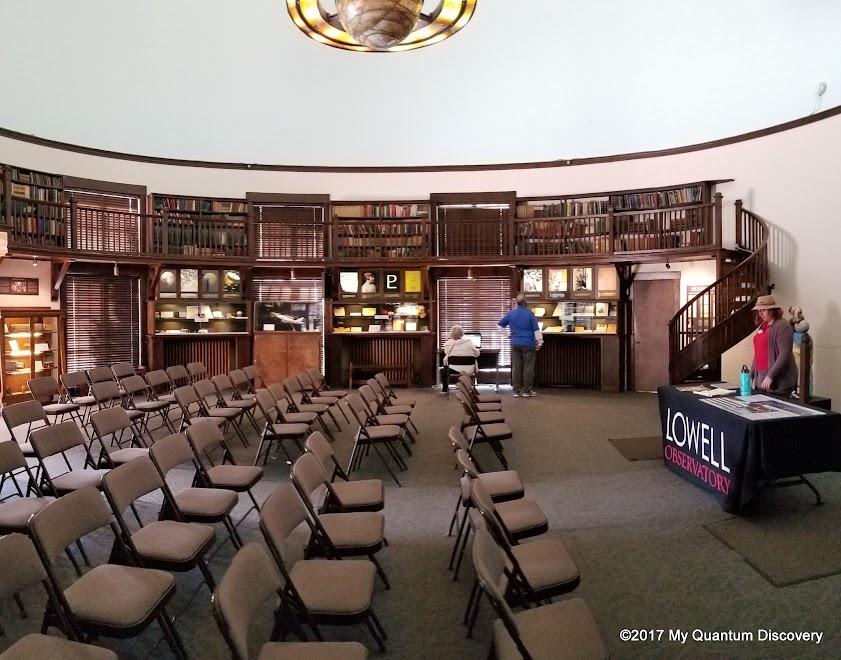 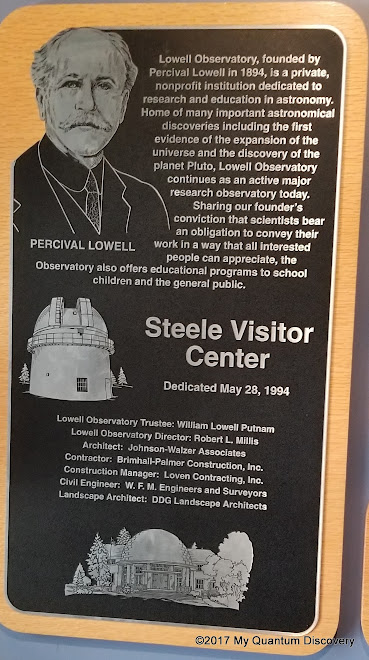 Percival Lowell, born in 1855 to the prominent and wealthy Lowell family of Boston, graduated from Harvard with a distinction in mathematics, ran a cotton mill for 6 years, then traveled extensively in the Far East for 10 years. It wasn’t until after reading Camille Flammarion‘s La planète Mars in 1893 that he developed an interest in Mars and determined that astronomy would be his full-time career. And I thought I was bad not knowing what I wanted to be when I grew up!

To pursue his late in life dream he decided to build an observatory and after much research, he chose Flagstaff, Arizona as its home because of its high altitude (over 7000 feet), its few cloudy nights, and its distance from city lights. Today it is noted to be one of the oldest observatories in the US and was designated as a National Historic Landmark in 1965.

Lowell devoted much of his life and fortune to finding “Planet X”, a hypothetical planet beyond Neptune alleged to be there due to unexplained aberrations in the motions of the other planets. Unfortunately he died in 1916 of a massive stroke with some speculation that his death was perhaps in part due to the stress revolving around his inability to find Planet X.

Planet X was finally discovered in 1930 by Clyde Tombaugh, a Lowell Observatory intern and aspiring astronomer, hired by astronomer VM Silpher. Tombaugh would photograph the same part of the sky several days apart and use a Zeiss Blink Comparator to detect the motion of a nearby planet against the more distant “fixed” stars. He spent 7000 hours (3.5 working years) searching for the elusive object. Oh my, what a tiresome and laborious project that must have been!

But ultimately his time and effort paid off – he found the distant planet on photographic plates taken in 1930 on the 23rd and 29th of January. 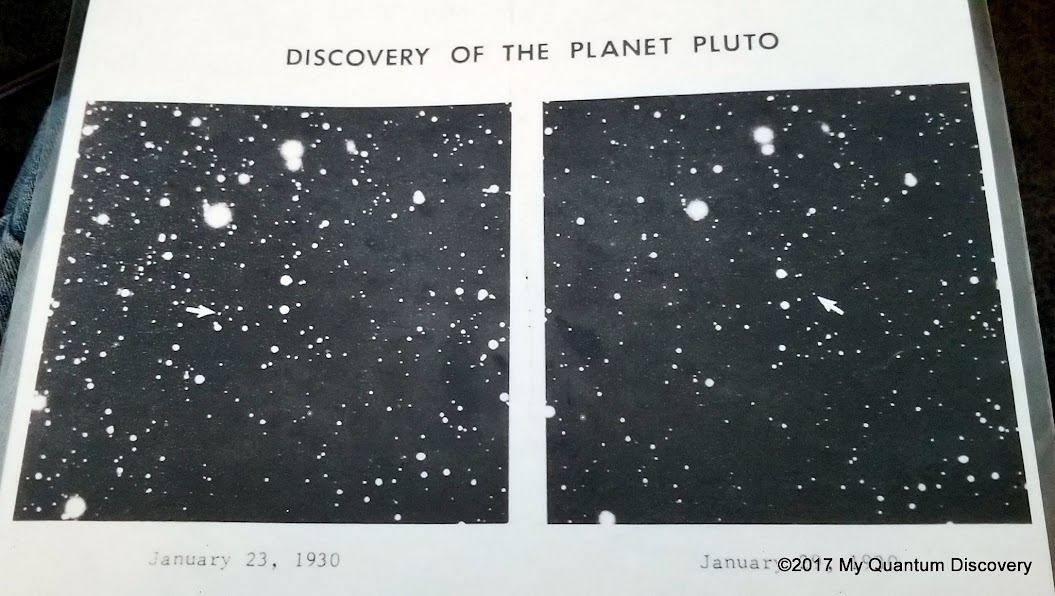 The name, Pluto, was suggested by Venetia Burney, an 11 year old girl, because it referenced the name of the Roman God of the underworld who could make himself invisible. A good name for a dark planet for sure! Additionally the symbol for Pluto (shown left) contained the initials of Percival Lowell who had predicted the existence of Planet X. So Pluto it was!

Also, ironically the Pluto symbol has another meaning. It turned out that Lowell’s calculations to predict the location of Planet X based on the orbit of Neptune and Uranus were wrong (and that wasn’t discovered until the 1990’s). It was just a case of “Pure Dumb Luck” that Pluto happened to be in the part of the sky that Lowell had predicted!

March 13, the date that the discovery was announced turned out to be a popular date – it was not only the date of the Pluto discovery in 1930 but it also was Percival Lowell’s birthday (if he had still been alive) and also the same date that William Herschel discovered Uranus in 1781. So many coincidences!

The Lowell Observatory website provides further details about the discovery. 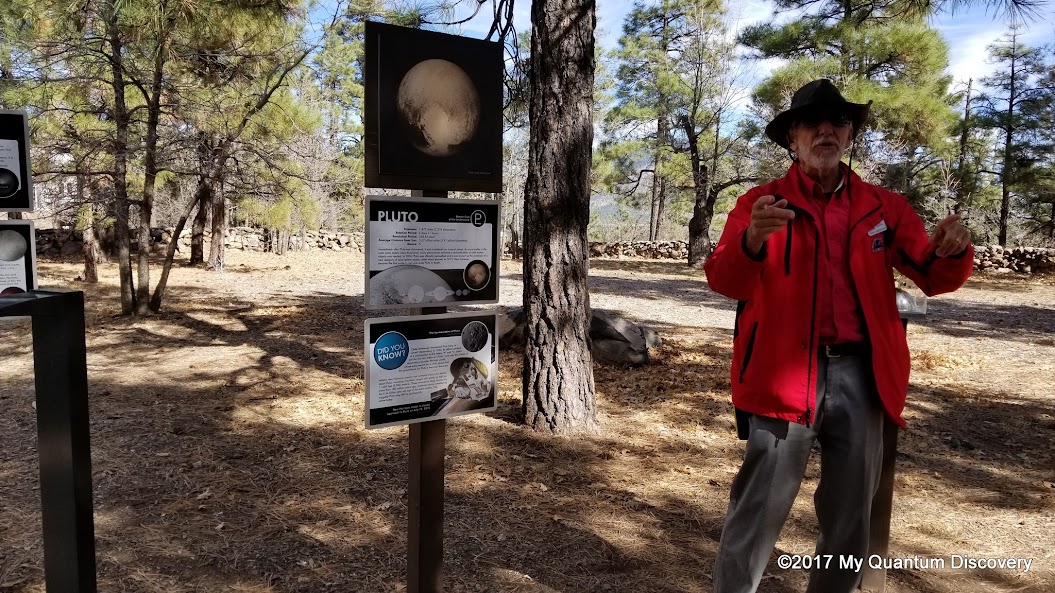 As part of the Story of Pluto tour, Jim led us to the Pluto Walk and up the hill towards the Pluto Dome. With the altitude here over 7200 feet the Pluto Walk can literally be a bit breath taking. Along this walk is a 350 foot outdoor exhibit which illustrates the scale of all the planets of the solar system from the Sun to Pluto with facts about each of the planets. Pretty interesting seeing it presented this way! 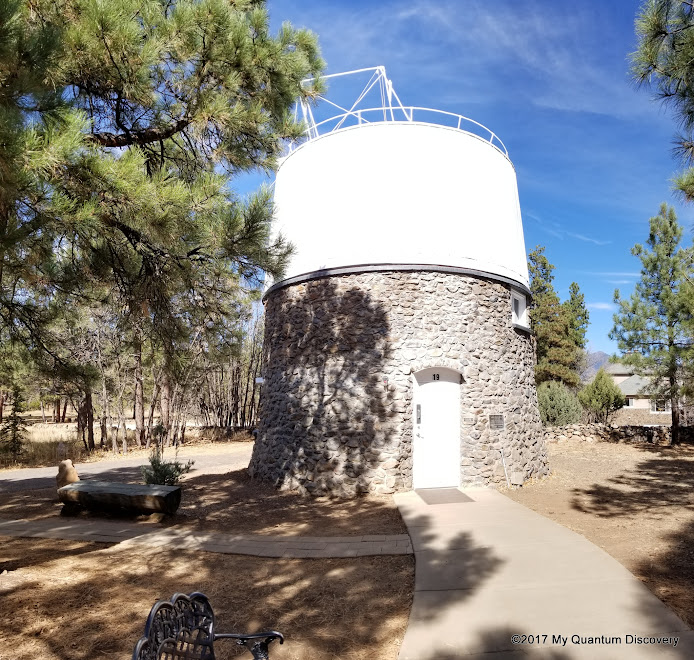 Unfortunately the Pluto Dome which houses the 13 inch astrograph (a type of telescope employed exclusively to take pictures) was undergoing renovations so it wasn’t open for tour groups. 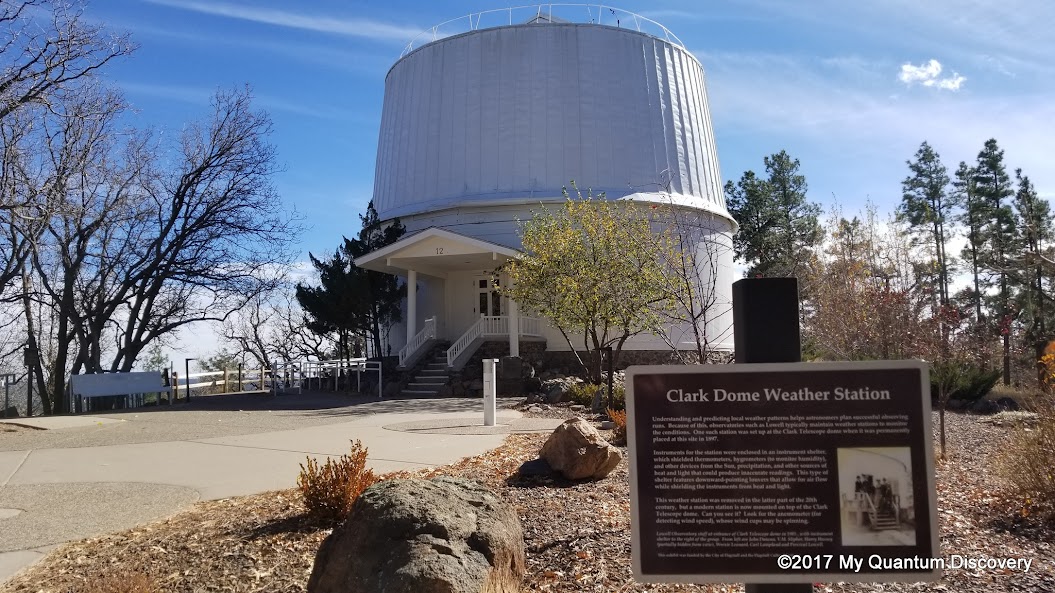 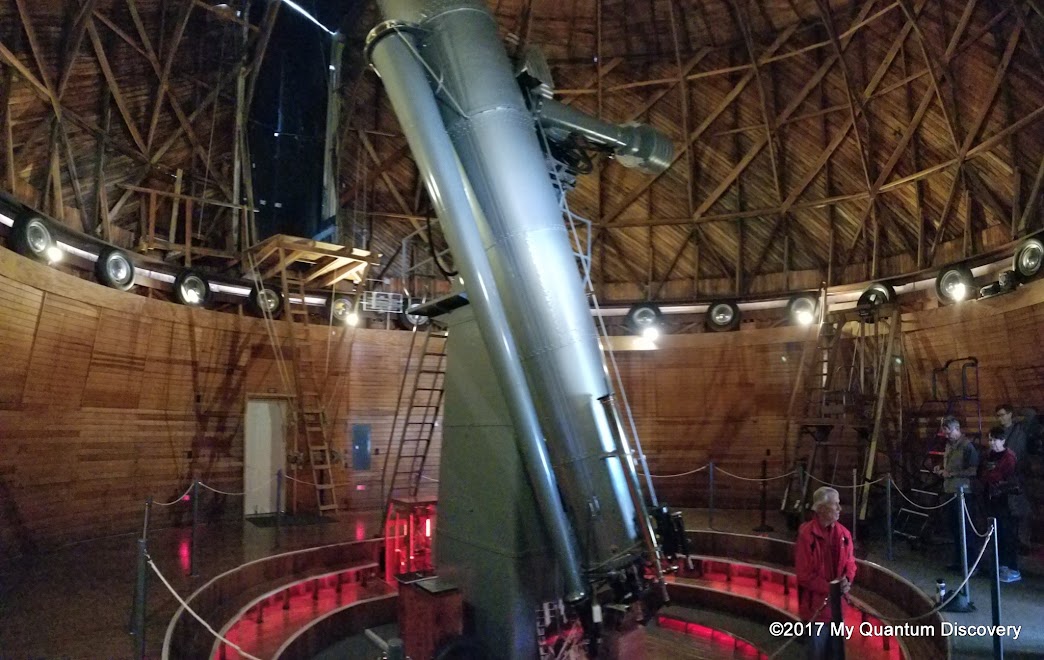 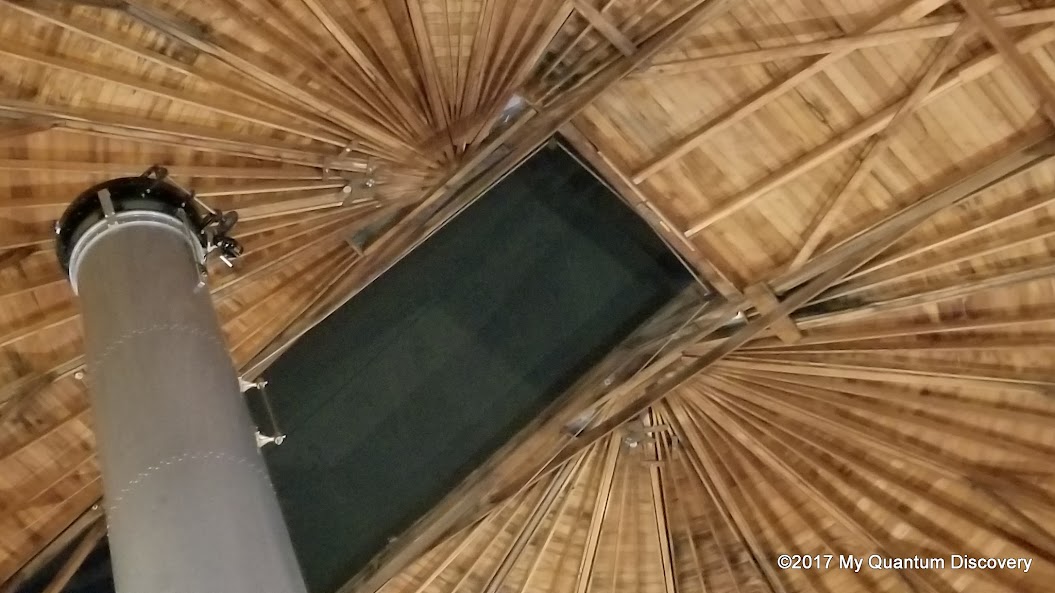 After the Story of Pluto tour we regrouped with Jim again for the Lowell Tour. This tour started in the visitor center auditorium then proceeded to various highlights around the campus.

The Clark Telescope Dome, the oldest standing building on the campus, was constructed by local bicycle repairmen Godfrey and Stanley Sykes, also members of a group of Flagstaff intellectuals known as the “The Busy Bees”. Inside was the 24 inch refracting telescope considered state of the art at the time built by Alvan Clark & Sons of Cambridgeport, Massachusetts in 1896. Although construction of the dome was completed in 10 days, it is still in good shape today except the roof’s rotation mechanism has been updated. Today, the dome lid sits atop numerous 1954 Ford pickup wheels and tires!  Even today the telescope is one of the most celebrated public telescopes in the world. 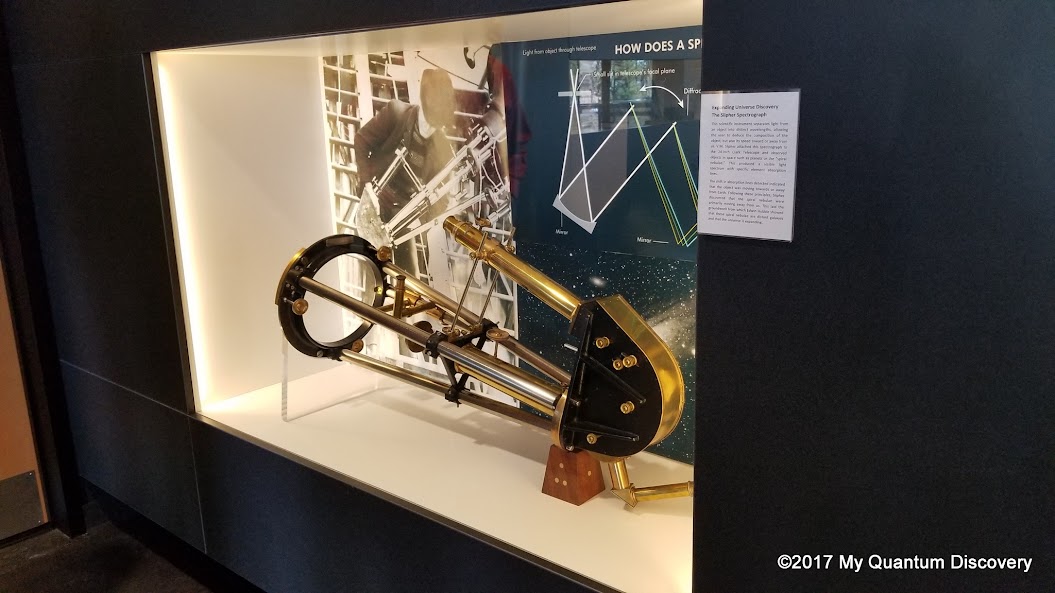 This telescope along with a spectrograph (a device used to determine the composition of celestial objects and their line-of-site-motion) was used in another important discovery made by one of the astronomers, Vesto Melvin Slipher between 1912-14. His discovery of galactic redshifts which describes how light changes as objects in space (such as stars or galaxies) move further away, lent support to the development of the expanding universe theory, leading scientists to believe that other galaxies existed beyond the Milky Way. Unfortunately because of the limited size and strength of the Clark Telescope, Slipher could only measure velocities, he couldn’t measure the distances to the spiral galaxies. But another now famous astronomer, Edwin Hubble, could using the giant 100-inch telescope at Mount Wilson in Los Angeles, CA. Hubble used Slipher’s velocity data (with permission) in conjunction with his own measurement data, but when he announced the discovery (later known as Hubble’s Law) Hubble never gave Slipher credit. In the words of our tour guide, the very “arrogant” Hubble basically “stole” the theory from Slipher! 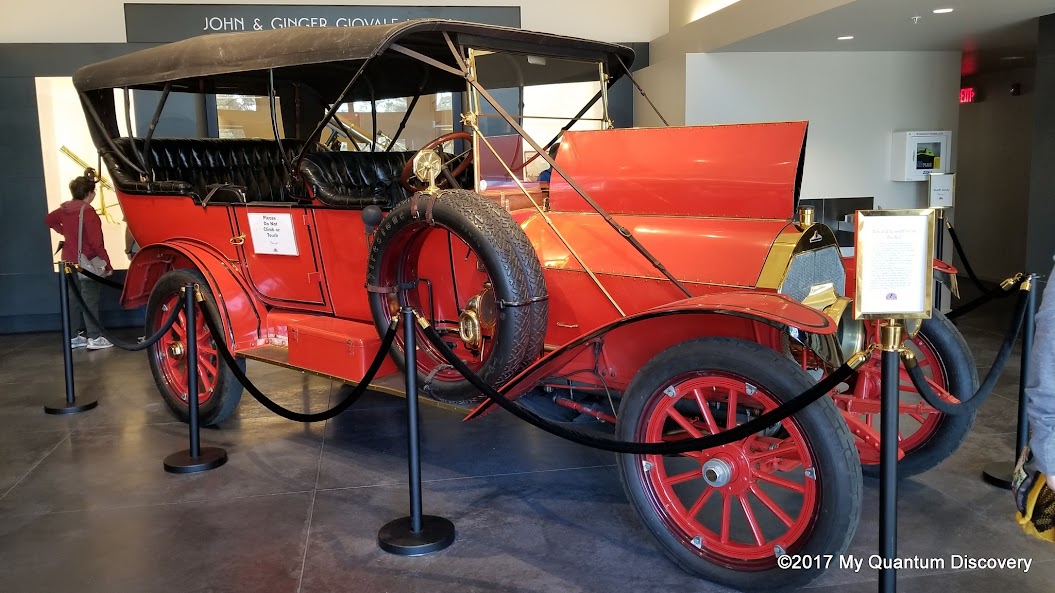 The Putnam Collection Center, an 8,000-square-foot facility built in 2014, houses a research library, a processing room, staff offices and an extensive collections repository that houses pictures, glass plates, antique equipment and historic documents, all closed to the public. However, there are displays for public viewing in the building lobby. Of special interest were Percival’s first telescope given to him by his mother and his Model Y custom built 7 passenger car named “Big Red” built by the Stevens Duryea Company in Chicopee Falls, MA in 1911. 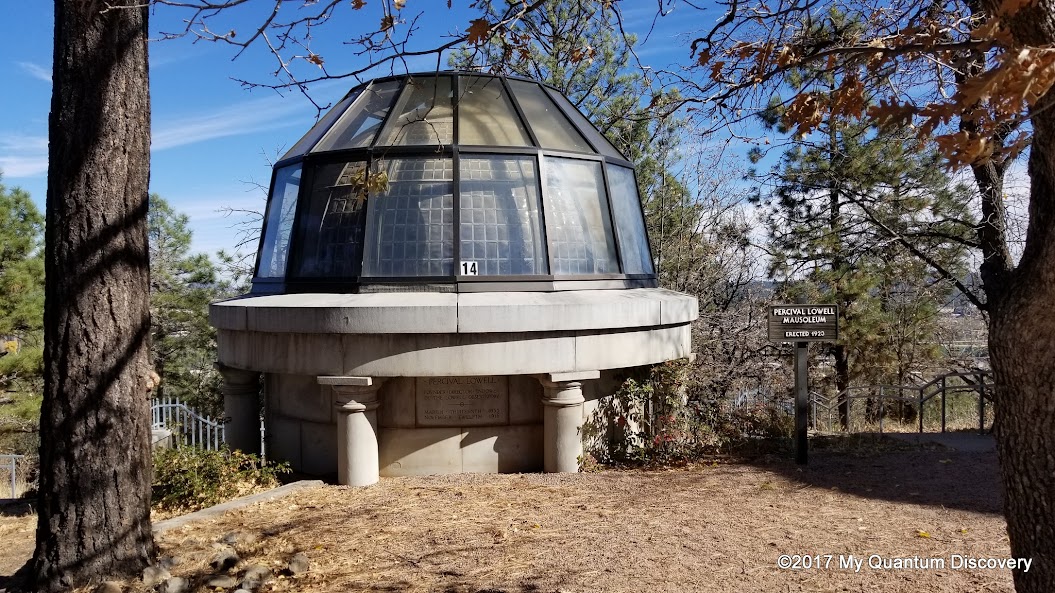 After Percival died in 1916, his wife Constance designed a Mausoleum for him with a base made of New England granite and a dome of inset cobalt blue glass tiles to represent the sky. We were encouraged to drop by the grave site and give a shout out to “Uncle Percy”. 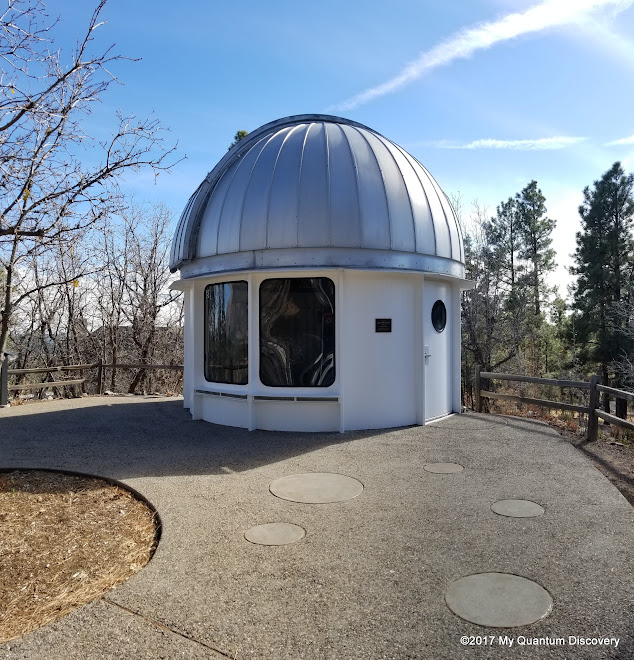 A short distance from the Mausoleum was the McAllister Telescope Dome which houses a reflecting telescope with a Cassegrain optical system featuring a 16 inch primary mirror. This telescope is used primarily for educational purposes.

On our way back to the Rotunda, one of the astronomers/employee was outside with a solar telescope giving everyone an opportunity to peer at the sun without damaging our eyes. We could actually see sun spots and solar flares. How cool is that! 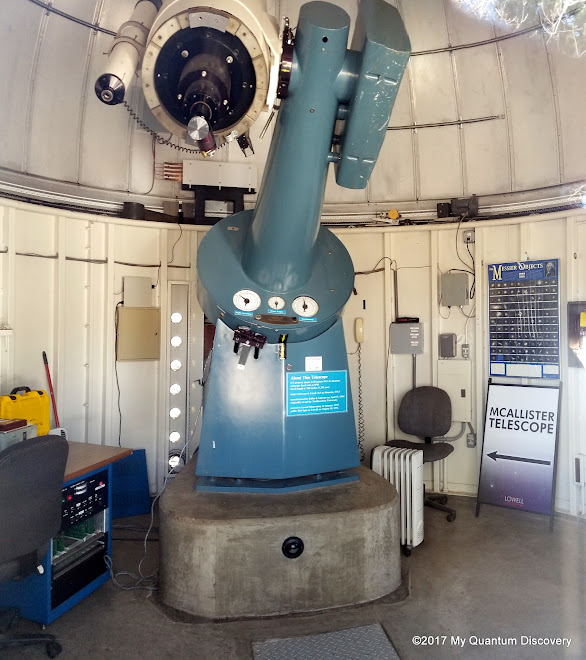 Besides the discovery of Pluto and Slipher’s discovery of other galaxies and the expansion of the universe, other significant discoveries made at Lowell Observatory include:

Our admission included attending the Evening Telescope Viewing here at Lowell utilizing the McAllister and Clark Telescopes, as well as five evening presentations – that would have been awesome! But we would have had to hang around for several hours waiting and with an hour’s drive back to the resort, we decided not to stay. Next time we’ll plan it better and arrive later in the day so we can attend the evening activities. Overall it was a fascinating and educational day, definitely worth it! 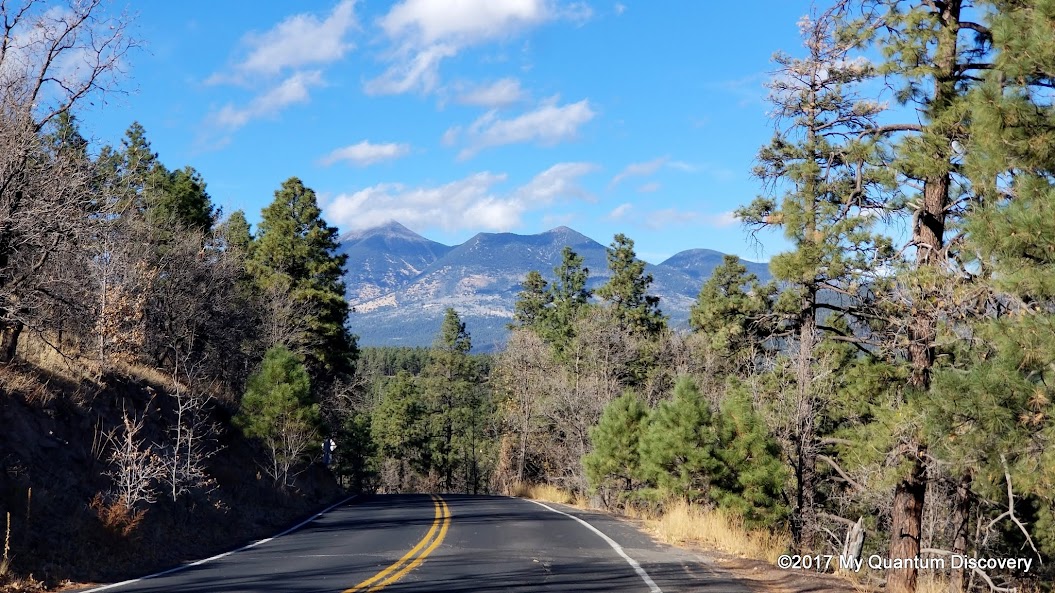