With this wonderful nomadic  lifestyle it seems every day is a different experience with a new adventure lurking around the corner. On this particular day, October 31st, we would transition from staying at a very modern resort next to a casino (Route 66 RV Resort) in NM to high desert camping near archaeological ruins at Homolovi State Park (review coming) in Winslow, AZ. 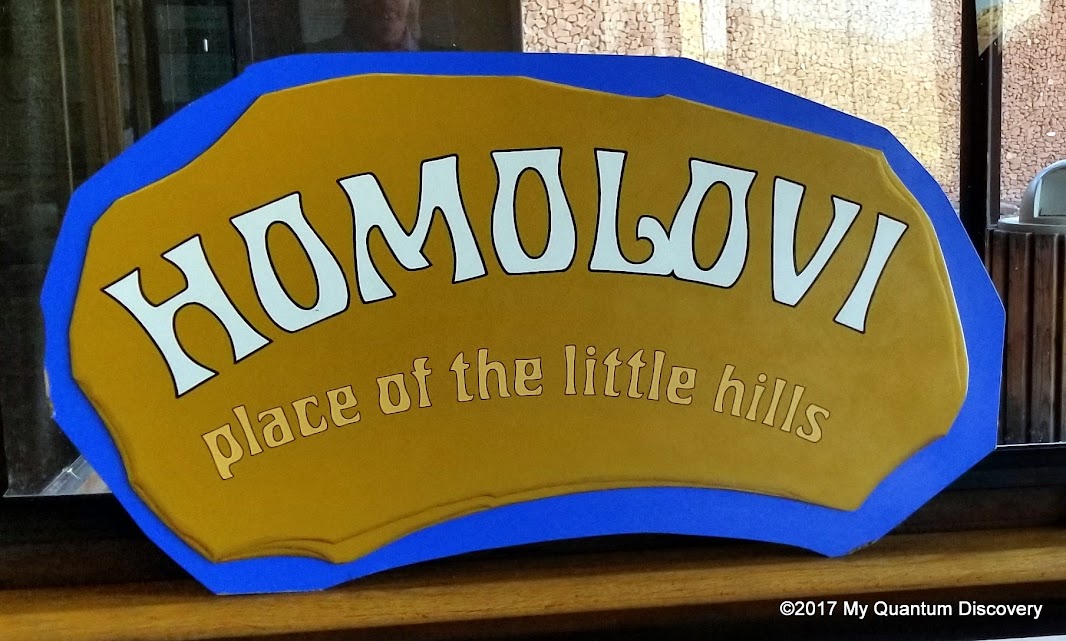 Even though it was another long ride of 246 miles, we would be driving on a very familiar interstate, I-40, the infamous highway that replaced the Main Street of America known as Route 66. Having traveled this route in the reverse direction going from west to east last March, 2017, we knew that even though it would be a long drive and perhaps a little boring, the backdrop of red rock mesas, buttes and plateaus rising from the desert landscape would still be a compelling and enjoyable sight as we traveled from east to west. Yes, it was just as pretty as I remembered it to be. Good thing because snapping photos with my phone and updating the Waze app with traffic and road hazards kept me occupied most of the way. 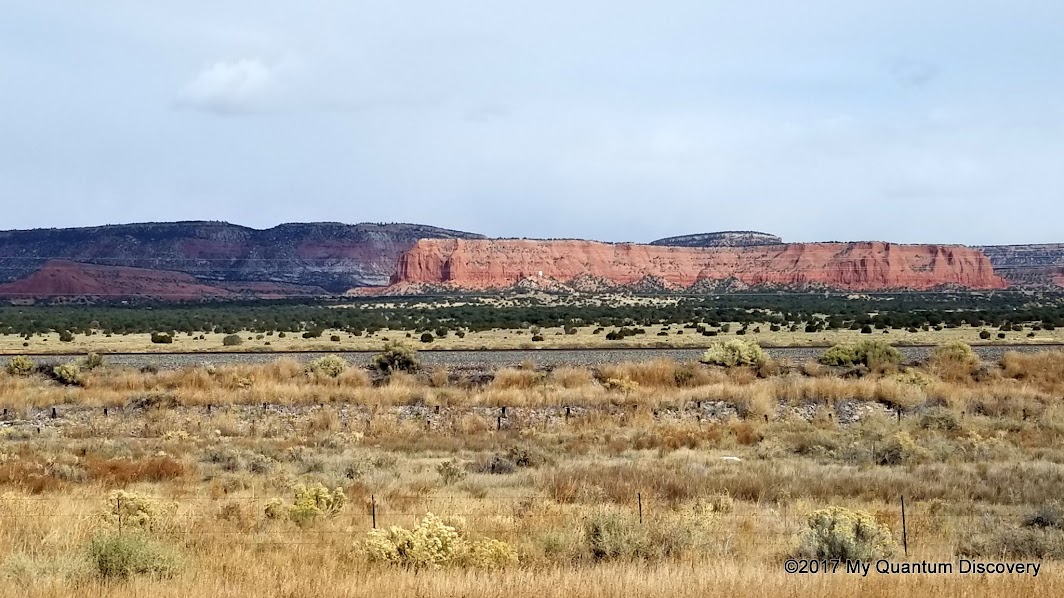 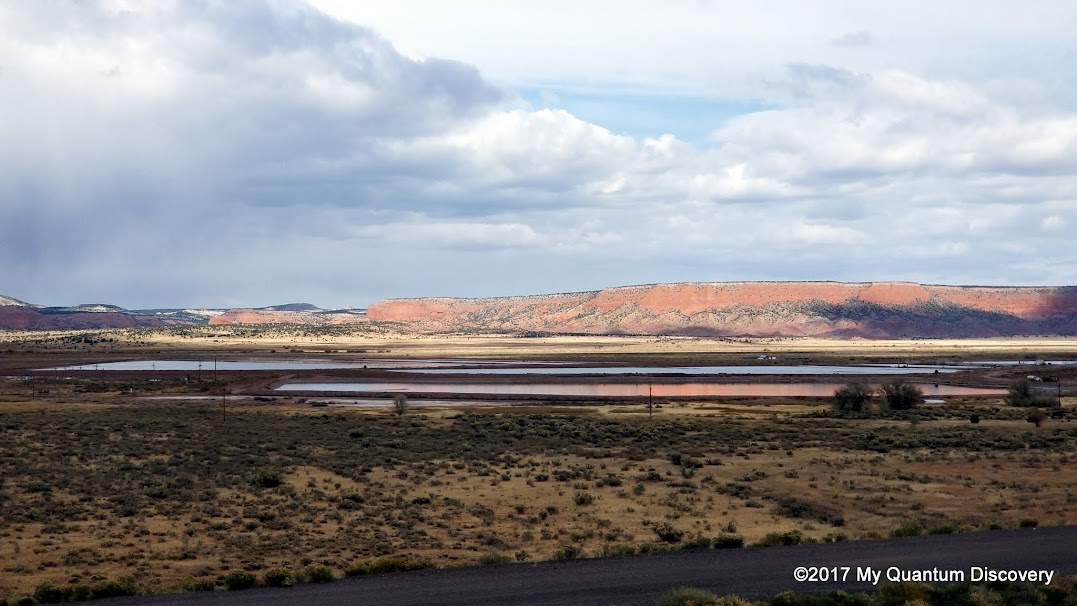 During our drive, we started talking about the topology of the land we were seeing. Despite digging into the inner depths of our grade school memories, the difference between mesas, buttes and plateaus escaped both of us so I figured now that we were back in the Southwest it would be a good idea to do a refresh. That’s one good thing about being connected to the cloud all the time, even on the road, plenty of opportunity to research things like that. This article provides an understandable explanation. In simple terms, a butte is a small flat-topped or pointed hill or mountain formed when a mesa erodes. A mesa, from the Spanish word for table, is a plateau that drops steeply off on all sides. And a plateau is a really big flat-topped hill or mountain that spreads over a large region. 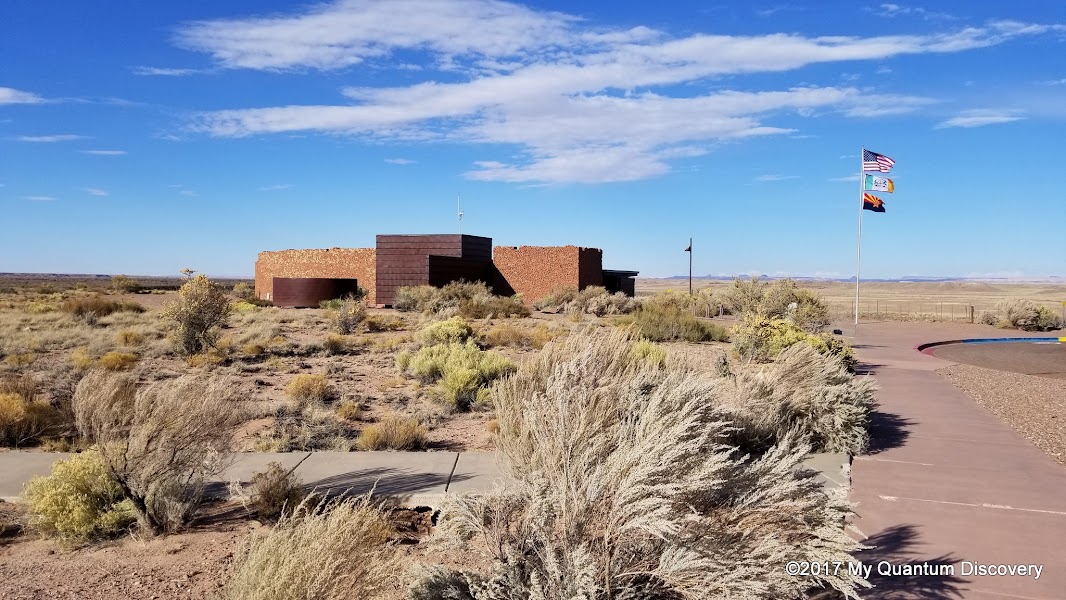 Having already experienced “standing on the corner in Winslow, Arizona” back in March, we didn’t think the high desert near Winslow would offer any additional sightseeing opportunities after our mid-afternoon arrival on October 31st. But once again we were proven wrong. Once settled in to our site, our first indoctrination into Homolovi State Park was at the Visitor Center where there are exhibits explaining the archaeology of the ancient 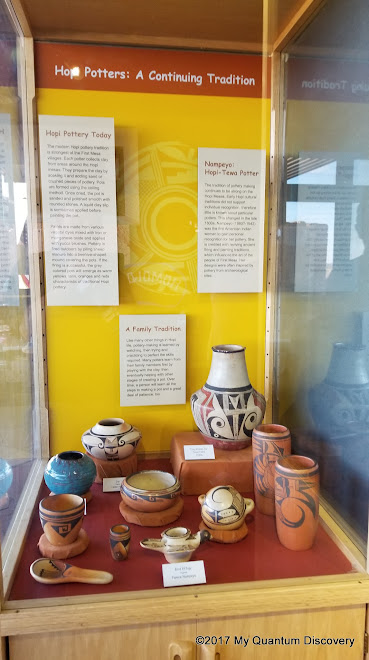 people of Homolovi (which is Hopi for the “place of little hills”). Displays of prehistoric Hopi pottery wares, carvings, stone and bone tools and historical art works from the late 1880s to the late 1960s educated us on the various aspects of the Hopi culture. In addition to the displays, the Gift Shop offers books on the natural and cultural history of northeastern Arizona.

Prior to the the area being designated a State Park, there was public concern about the devastation of the Homolovi sites by illegal collectors of prehistoric artifacts. Thankfully when a backhoe was discovered unceremoniously digging through burial sites and kivas, the residents of Winslow, the leaders of the Hopi and government officials came together to protect these ruins by establishing the State Park which opened in 1993. Sadly the park was closed in February, 2010 due to Arizona budget cuts, once again raising concerns about potential vandalism but fortunately it reopened in February of 2011. Today it serves as a center of research for the late migration period of the Hopi from the 1200s to the late 1300s. 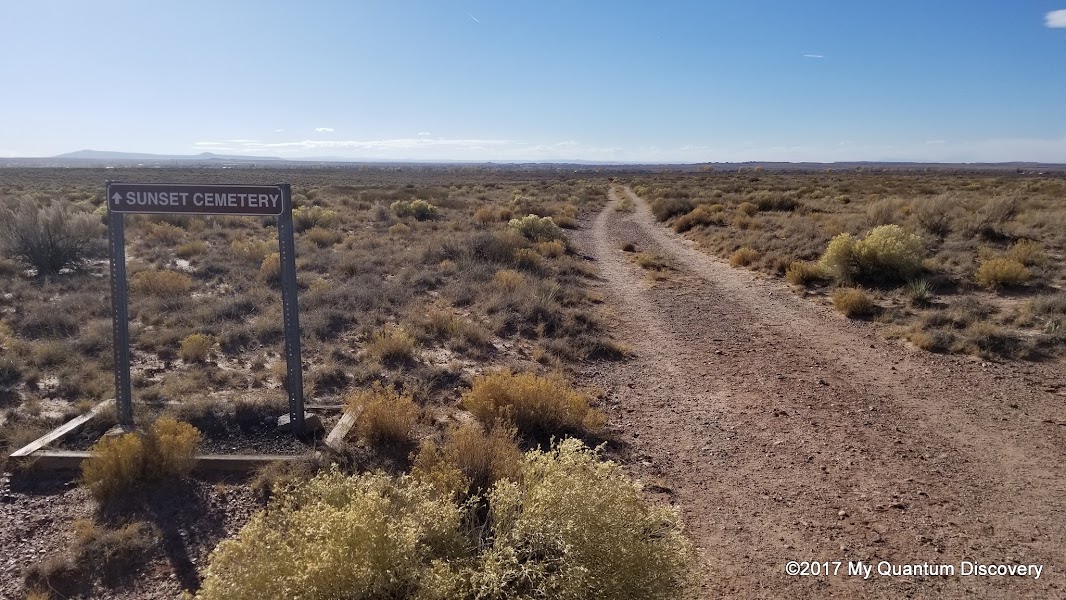 Although we didn’t visit it, close to the Visitor Center were signs for Sunset Cemetery. Sunset Fort was a farming community located along the Little Colorado River, established in 1876 by Lot Smith and his Mormon followers. This settlement boasted the first post office along the Little Colorado River and was near an important ford of the river. Frequent floods forced the settlers to abandon the community in the early 1880s. Although the community was washed away, the cemetery, located on a small hill, survived. A dirt trail leads to the cemetery where three of Lot Smith’s children are buried. 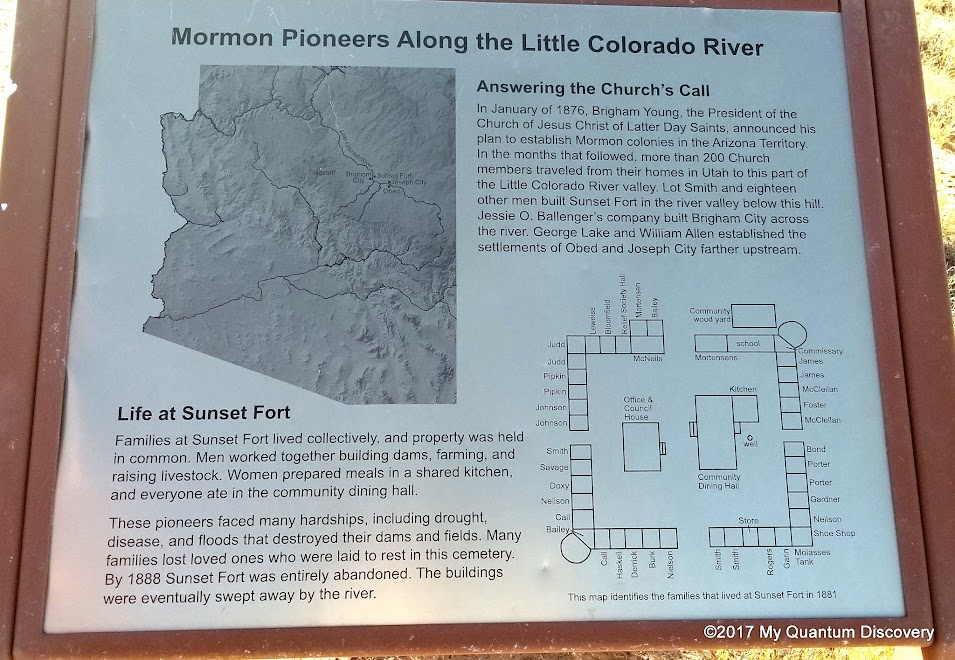 Besides the Visitor Center, the cemetery and the campground, the State Park also features four main Pueblo ruins, two of which are open to the public. Homolovi II is located a few miles from the campground. A 1/2 mile paved trail that is wheelchair accessible provides access to the largest of the Park’s archaeological sites containing an estimated 1,200 to 2,000 rooms. 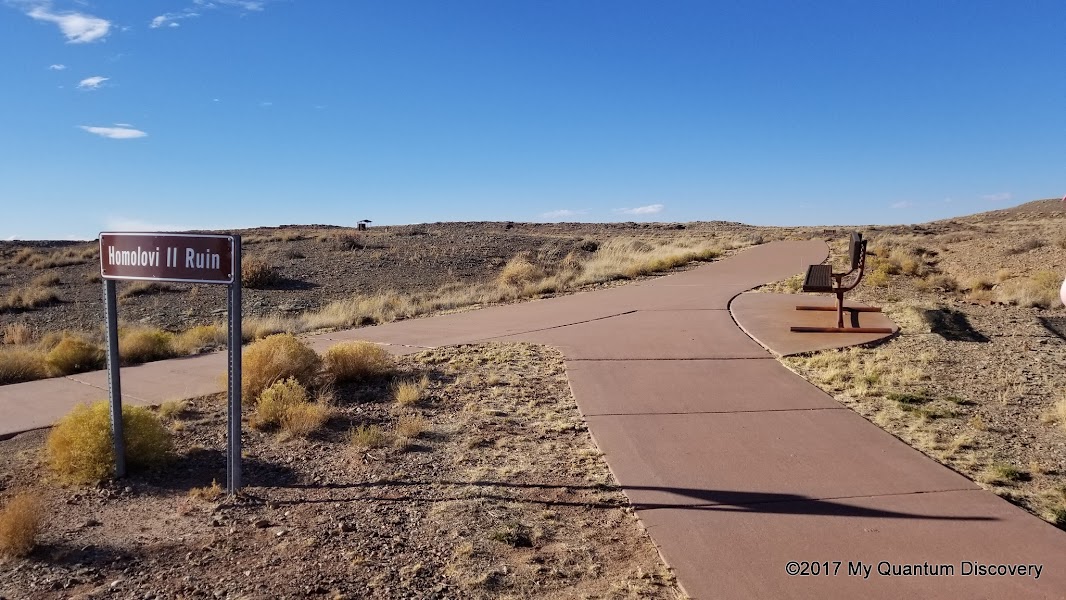 Scattered near the trail were shards of pottery, remnants of the pottery once used by the 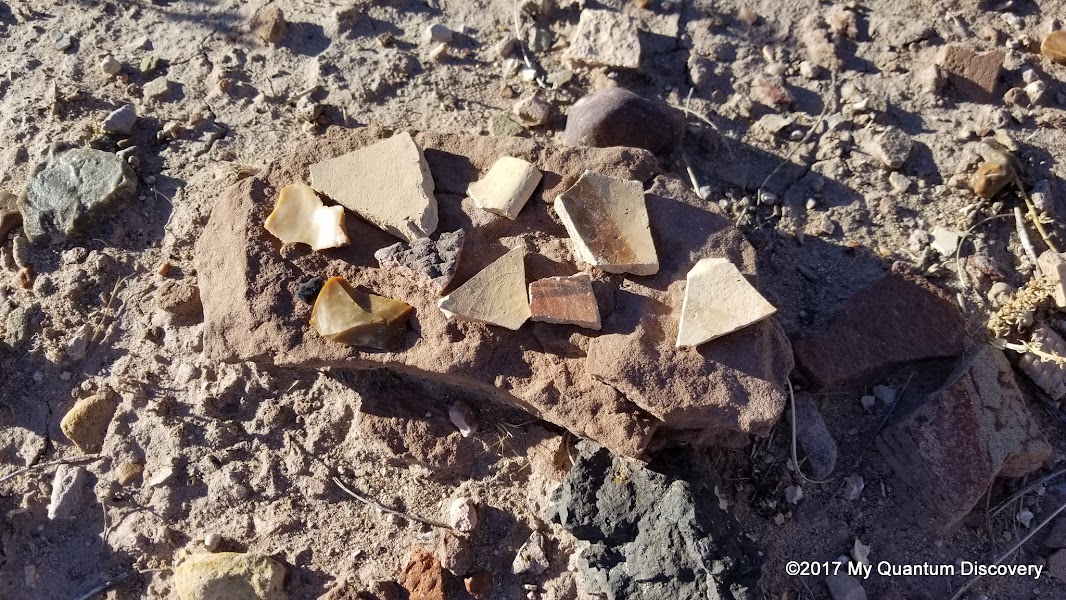 inhabitants here. Were these placed here deliberately by the state park staff or were these disturbing signs of vandalism we wondered. Numerous signs warned that these ruins are protected so the removal of any artifacts, rock art and other cultural items is prohibited.

The Hopi believe that the broken pottery and stones are now part of the land and are the trail the Bahana (an elder brother who traveled to the east to learn about the world) will follow when he returns, bringing with him a golden age and happier times. 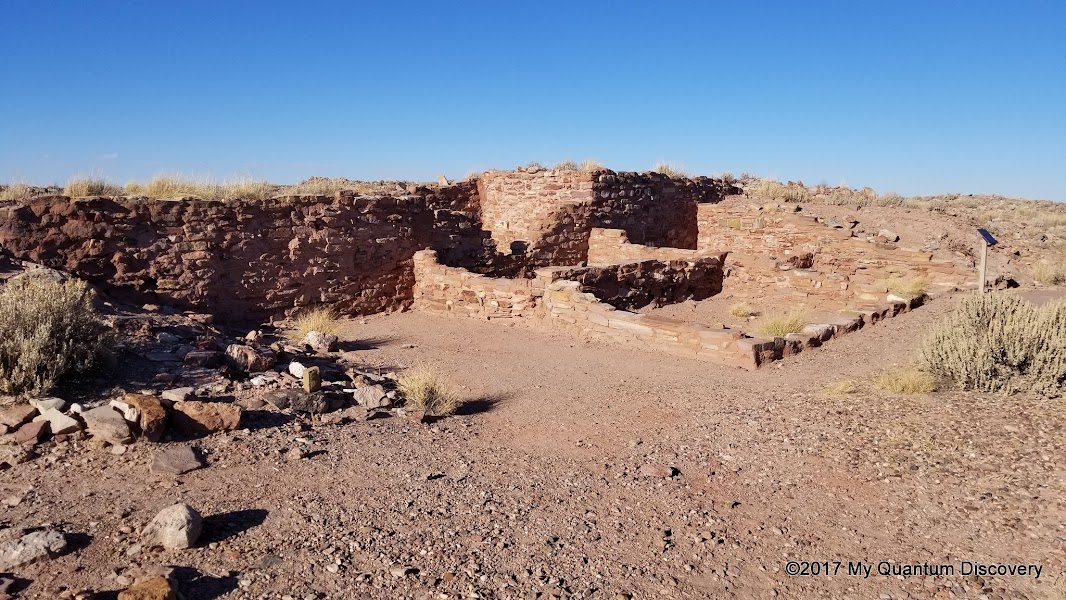 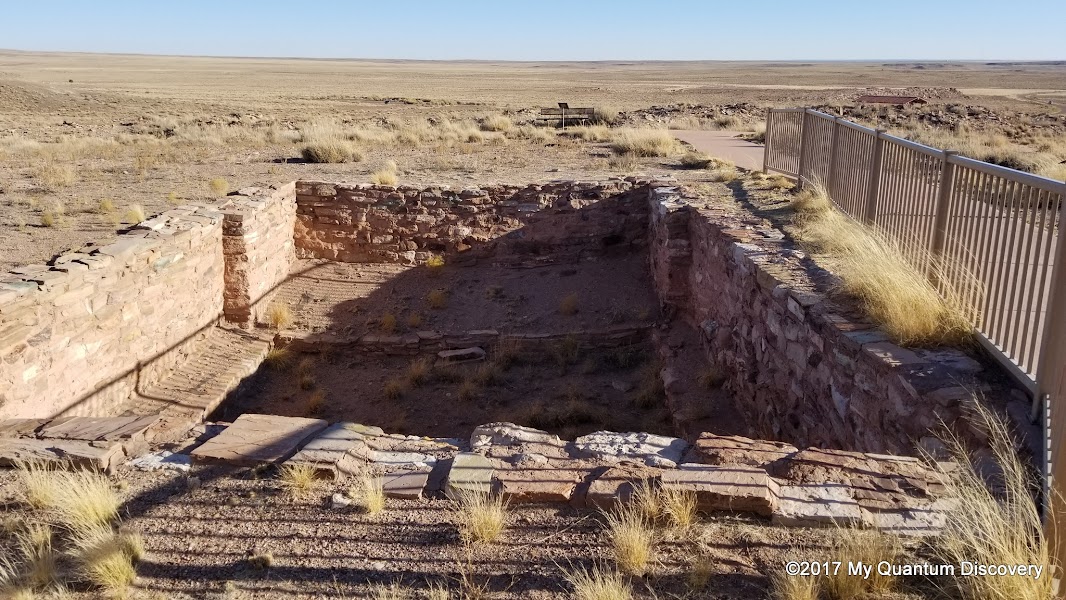 These ancient people farmed here on the Little Colorado River, growing corn, beans, squash, cotton and medicinal herbs. Elk, antelope, deer, beaver and waterfowl were important to their diet and their rituals. Living today in our world of advanced technology, as we looked at the ruins and read the informative signs, it was humbling to imagine what life must have been like in those ancient times. 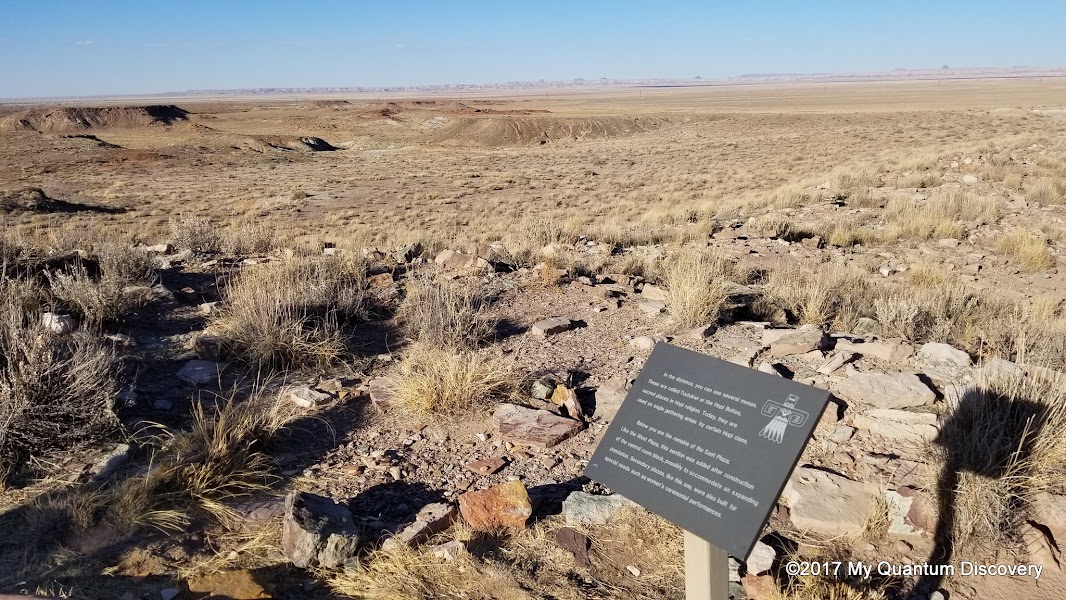 Research and excavations by the Arizona State Museum has revealed three plazas, outdoor activity areas, 40 kivas (cellar or underground house) and living, working and storage areas.  On the western horizon, we could see the San Francisco Peaks (12,670), the highest peaks in Arizona, believed by the Hopi to be the home of Katsina spirits, supernatural beings who had the power to bring the rains needed to make the crops flourish to produce a bountiful harvest. 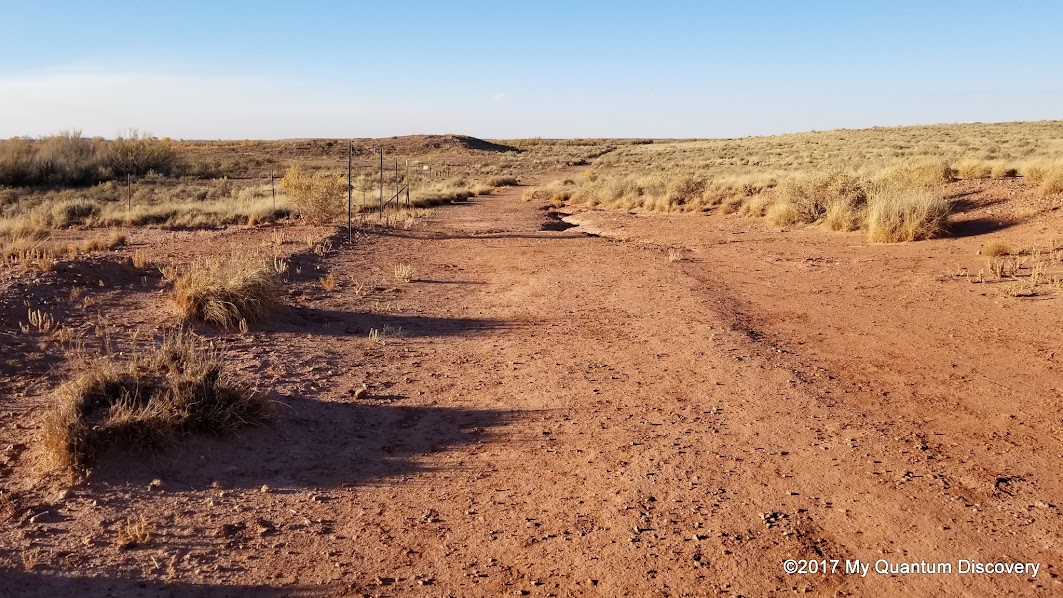 The other ruins open to the public are at Homolovi I, located about 1 mile past the campground next to the Little Colorado River. Homolovi I was the longest inhabited village within the park boundaries with strong economic and political relationships with the people of Homolovi II.  A 1/2 mile dirt trail leads from the parking lot to the actual ruins (which weren’t as well marked as those in Homolovi II) where there are remains of 1000+ rooms of a three story pueblo. This village is divided into two sections – the larger and older one (founded in 1285-1290) is made of stone masonry and sits atop a hill that forms the prominent mound of the village.The smaller section is made of form molded adobe brick constructed around 1350. This section was built on an artificial platform to keep the village above the flooding from the Little Colorado River.  However, it is speculated that the continual flooding prompted the Anasazi to relocate to the Hopi mesas. By 1400, the last inhabitants of Homolovi had moved on. 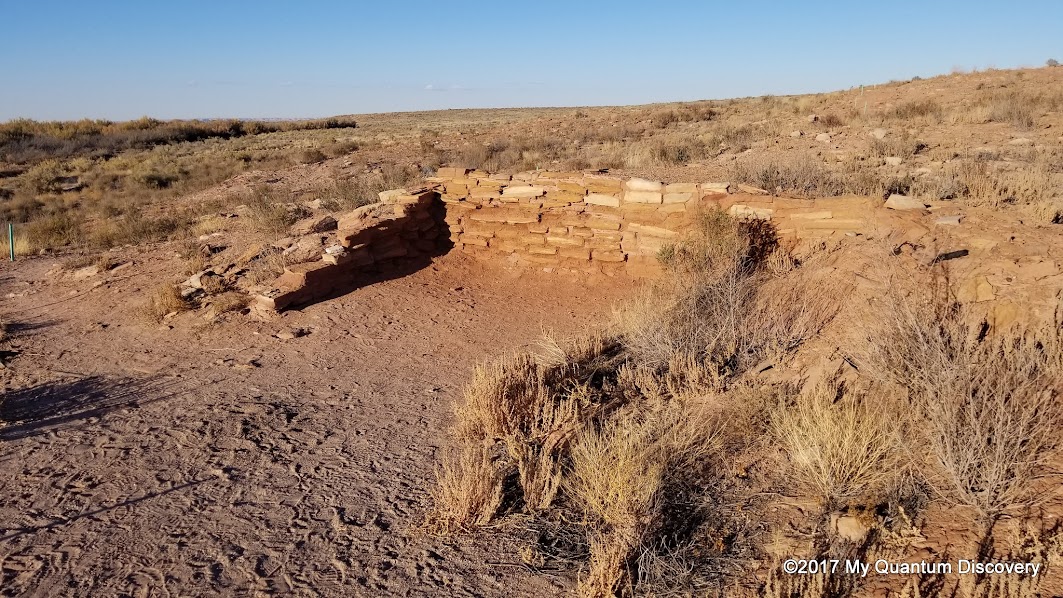 Even today, the Hopi people, the descendants of the Anasazi, consider Homolovi to be part of their homeland and continue to make pilgrimages to these sites to renew the ties of their people with the land.

Homolovi III and IV are closed to the public although there are 3 hour long guided tours of Homolovi IV given during the fall. Note that the number of persons allowed on each tour is limited to 12 so reservations are a must. Unfortunately the timing didn’t work out for us but maybe next time it will. The Arizona State Museum has presented a 3D model of Homolovi IV on their website.

Coming up next will be a visit to another historic treasure in the Winslow area, one so interesting it deserves a separate post. 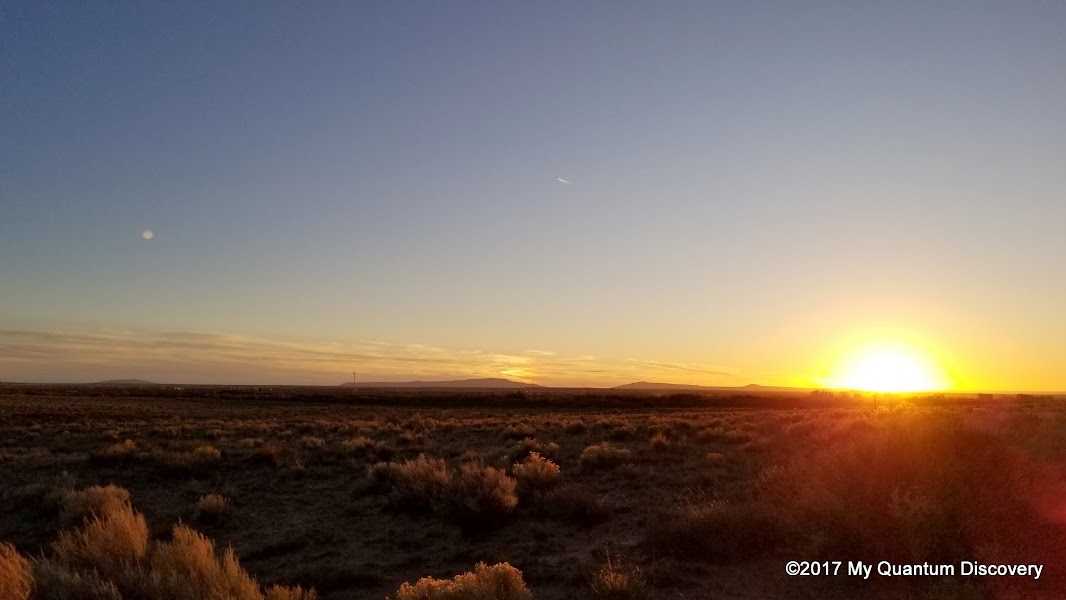 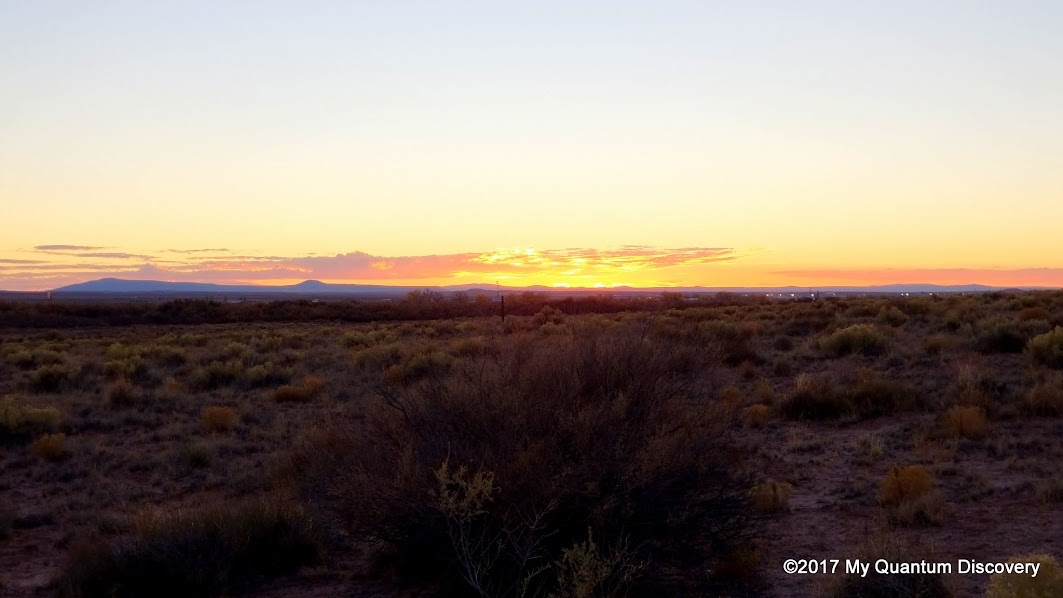