Breakfast! Of course, how could we not write about Rob’s favorite meal of the day! As Rob commented towards the end of our stay “this place is the mecca of breakfast restaurants”.  Seems like it is either feast or famine when it comes to breakfast places/restaurants – this area definitely was in the feast category! And to our surprise the majority of them had good reviews. It was tough deciding which restaurants to try!

So here is a list of the places we tried, listed with our favorites first.

If this sounds familiar to you, it’s because we’ve been to the Berry Fresh Cafe in Port St. Lucie several times. Since we’ve always enjoyed our meals there and I had signed up for their mailing list so I received a “Get a Free Breakfast On Us” Birthday coupon, we were happy when we 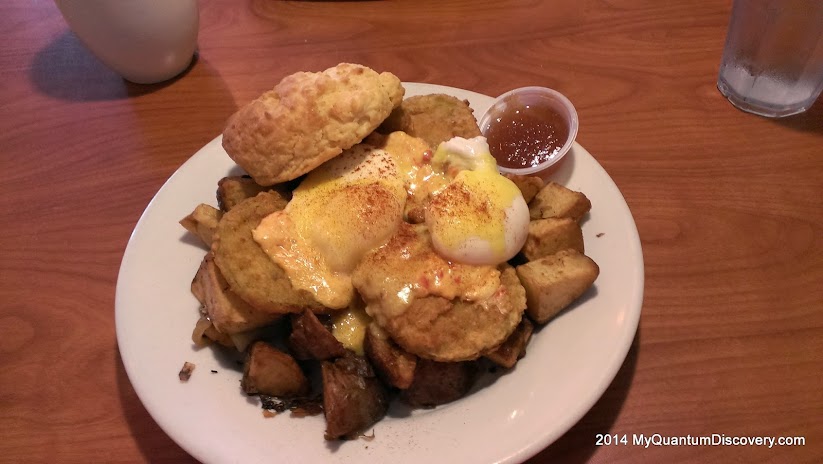 realized they had a second location in Jupiter.

Lots of very different breakfast selections on their menu. With the free breakfast coupon, I decided to get something different from my usual standard. 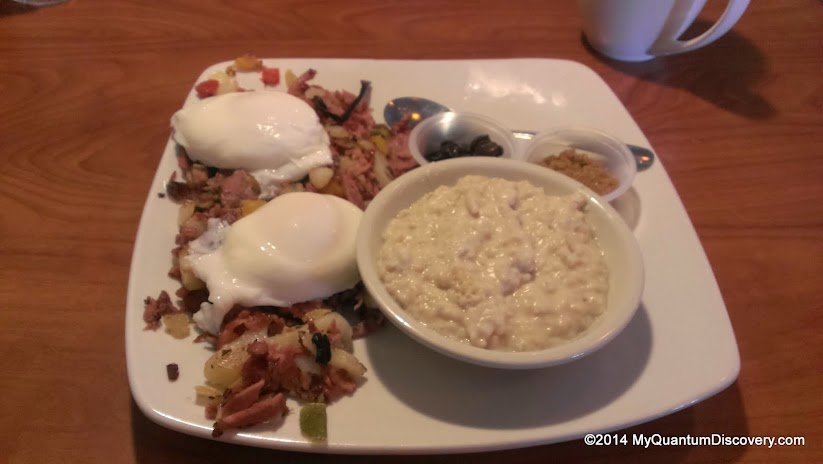 Based on the recommendation of our waitress, I ordered the “Fried Green Tomatoes and Pimento Cheese Hash” – fried green tomatoes topped with pimento cheese and two eggs, seasoned red bliss potatoes and crowned with Hollandaise sauce, served with a biscuit and apple butter ($8.95). Looking back on it, it sounds pretty disgusting. When it arrived, it was different than what I expected it to be, guess I expected the potatoes to be more mashed up or something. It was good but would I order it again? Probably not. Lot of food but the good news is that I had leftovers for breakfast the next day.

Rob had his usual “O.M.G. Homemade Corned Beef Hash” – slow roasted brisket, chopped with tri-color peppers and potatoes, grilled and served with two eggs, your choice of a side (he chose oatmeal) and toast ($8.95). Excellent!

Note this restaurant has now closed.

Located in the Tequesta Shoppes strip mall at 181 U.S. 1 in Tequesta and just a few miles from the campground, Blondies had very good reviews. After going there, we can see why.

It was Sunday so we had to wait for a table, perhaps about 10

After much deliberation, I had the “Dr. Seuss Scramble” ($8.99) which was scrambled eggs with diced ham and

American cheese and a choice of hash browns, oatmeal, or grits, and toast, English muffin, or beezy cakes. I had the beezy cakes which were very light pancakes. Pancakes aren’t my favorite thing but these were really good!

Rob had the “Yankee” ($8.99), 2 poached eggs on homemade hash with toast (don’t feel bad he had a few bites of my beezy cakes). The hash was very good.

Both meals seemed a little pricey but considering the area, this seemed to be the norm. We talked about going back again but never made it there.

When we first drove by the Lighthouse Diner, I thought that it looked like a former gas/service station. Well, it just so happens that’s what it once was according to the history found

We ended up stopping here twice. On our first visit, it was rather late (around 11:30 a.m.) so I opted to have lunch instead of breakfast. I ordered one of their specials – a Turkey Gobbler sandwich – turkey, stuffing, cranberry sauce and gravy served on a

kaiser roll with french fries or cucumber salad (don’t remember the price). Guess I had a hankering for a pre-Thanksgiving leftover sandwich! Instead of french fries, I had their delicious cucumber salad – a good thing as the fries would have been way too much food with this mammoth sandwich. OMG, when it arrived at our table, my first question was – how on earth do I eat this thing? Messy? Yes! Delicious? Totally!

Rob stuck with breakfast, having the Eggs Benedict Florentine – two poached eggs topped with sauteed spinach, sliced tomato and Hollandaise sauce on English Muffins ($7.50). What? No corned beef hash you’re asking? I was surprised to – this was kind of an unusual choice for him. For sides the choices were home fries, grits, oatmeal or fruit – he opted for the oatmeal. Everything was very good.

Before we left, I signed up to join their fan club at their kiosk, thinking we might have dinner here some night. Just for joining, they were offering a $5 coupon. Unfortunately to this day (11/30), I’ve never received anything from them via email (yes, I checked my spam). Oh, well.

We returned several days later, this time ordering the Lighthouse Breakfast Special “4811” served M-F, 7-11 and includes wo eggs with ham, bacon or sausage a choice of home fries, grits, oatmeal, or fruit, toast and coffee or juice for $5.95. Once again great service and good food and in this case a great price!

Deemed as a “classic New York and New Jersey Diner. In Florida”, the Time to Eat Diner is also located a short distance from the

campground at 716 US Highway 1 North in Tequesta. The  family that owns this diner also owns a gourmet Polish food market in New York City. Guess they can claim to be a classic New York diner since they have such dishes as hand-made Polish pierogies, corned beef, pastrami, cole slaw, real sour pickles and other Greek, Italian and

Hungarian dishes on their menu. But we weren’t there for all of that, just breakfast please!

I had the Traveler which was two eggs, any style with hash browns and toast, three strips of bacon and one sausage link

Rob had the usual two poached eggs,  homemade corned beef hash, hash browns and toast ($7.50). Hmmm, I wonder how many pounds of corned beef hash he eats in a year? For that matter, how many eggs do we eat every year? Food for thought! Maybe it’s best that we don’t know! Good thing our cholesterol is under control. And good thing we seldom eat lunch. Both meals were very good.

Not to worry, this is the last of the breakfast restaurants we tried in the area. Located at 223 Center St in Jupiter, this does live up

to it’s name as it is pretty small and has fairly limited parking. We were there on a Tuesday so it wasn’t that crowded when we arrived although it did get pretty busy before we left. Hate to see what this place is like on a weekend!

They had some pretty interesting things on the menu, including

panky-doos which is their name for pancakes and monster lobstah (a lobster patty with eggs and Hollandaise on a kaiser) and the Mama Lucia (a mammoth 12 egg omelet scrambled and stuffed with ham, onion, and cheese for $15.75)!!! We opted for the usual simple, standard and cheaper breakfast. I had

two eggs with bacon (which I shared with Rob), home fries (diced Idaho’s cooked my favorite way with onions) and toast, while Rob had two eggs with oatmeal and toast. Both were good, nothing special!

So there you have it – all the eating out we did in the area. To sum it up, the gourmet award is a tie between Berry Fresh and Blondies with The Lighthouse not too far behind in that category. The Lighhouse also takes best value because of their special. Time to Eat was good but not up to par gourmet wise with the others and the Center St. Nook was just good basic greasy spoon type diner fare.

I’m sure there are many good restaurants for lunch and dinner around too but our only fine dining experiences were at the Chez Aspire where yours truly was the chief cook and Rob was the chief bottle washer (er, dishwasher loader) and grill master!

On the morning of November 26th (the day before Thanksgiving), we left Jonathan Dickinson State Park and headed for our next destination. More to follow.