After saying goodbye to the braying burros of Oatman and Tradewinds RV Park in Golden Valley, AZ, we headed north on US-93 to our next destination, Willow Beach Campground & RV Park (review coming) in Willow Beach, AZ, about an hour’s drive. Situated in the Black Canyon region of the Colorado River and part of the Lake Mead National Recreation Area, the campground is located on the east side of the Colorado River, approximately 13 river miles downstream from Hoover Dam.  Even though it is part of the National Park Service, the campground (and the marina) is run by a concessionaire, Forever Resorts. 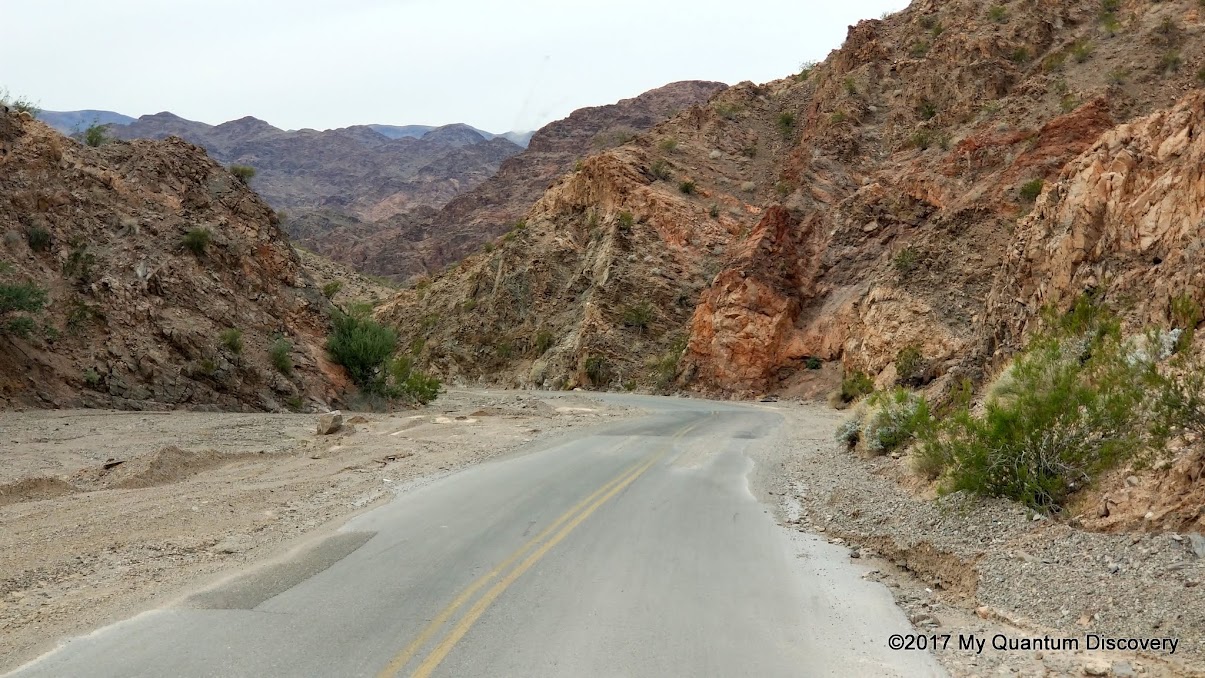 Note that there is a $20 entrance fee to visit Lake Mead National Recreation Area which covers all passengers in the vehicle valid for 7 consecutive days. That fee is waived if you have the America the Beautiful Senior Pass.

It was a somewhat twisty (and steep!) drive from the entrance station on Willow Beach Road, but there are no hairpin turns or steep drop offs. Beginning at 1883 feet elevation, over its 4.2 miles the access road would descend 1237 feet, about a 6% average grade! The registration office on the river shore is located at an elevation of 646 feet.

There were clear indications along the way of prior flooding and a few sections of the pavement have in fact been washed away, so we weren’t surprised to learn later that the original 187 site campground along with a marina, store, restaurant, motel, gas station, and trailer park with about 60 sites located in the Jumbo Wash area were destroyed by a severe flash flood in 1979.

A newly constructed campground on higher ground with new utility systems and flood protection measures was later implemented allowing the campground, marina and a store to reopen in 2010. So glad it did!

Situated at the top of a hill with towering red rocks in the background and views of the beautiful blue waters of the Colorado River, this gorgeous campground would be our home base for the next 6 nights! 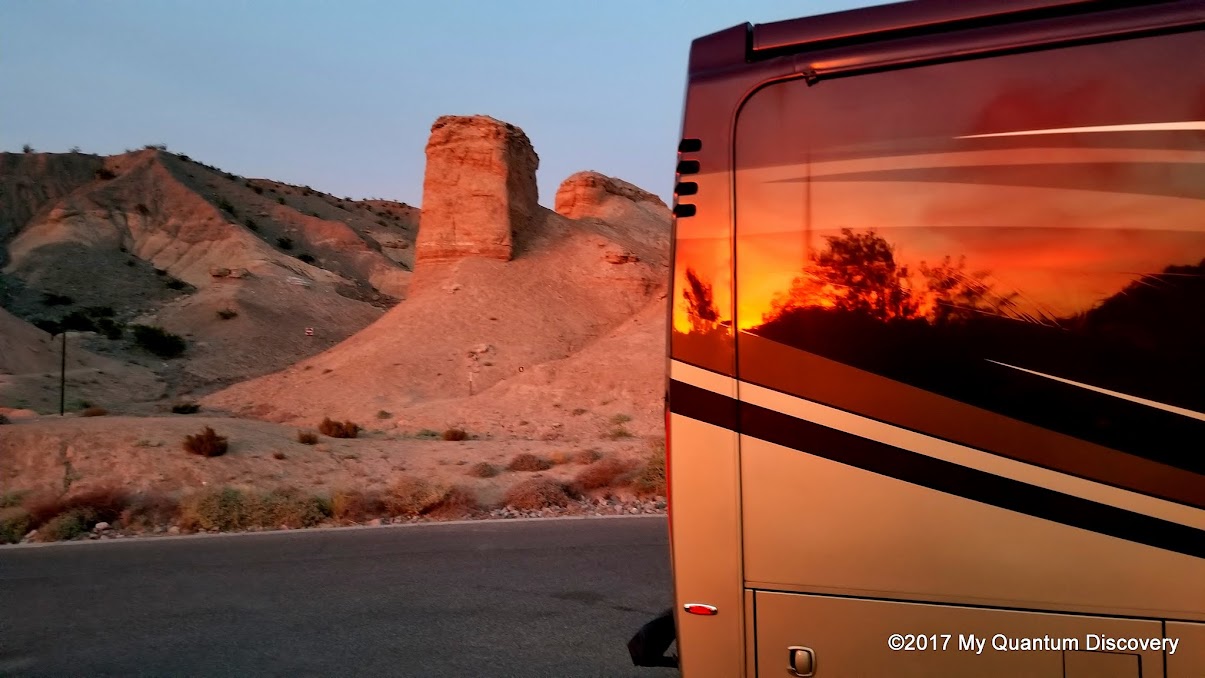 A perfect spot for enjoying spectacular sunsets, sitting by a nightly campfire and watching wildlife – bunnies (YouTube Video) in search of greenery, hummingbirds flitting from one feeder to the next, flocks of quail (YouTube video) scratching for seeds at each campsite, an occasional Bighorn Sheep and even tarantulas strolling by! Well, to be truthful we only heard about the tarantulas from the campground host (he even had names for them – not sure how he could tell one from the other but I guess he had a way). Thankfully I never actually saw any of the creepy crawlers but Rob said he was disappointed! 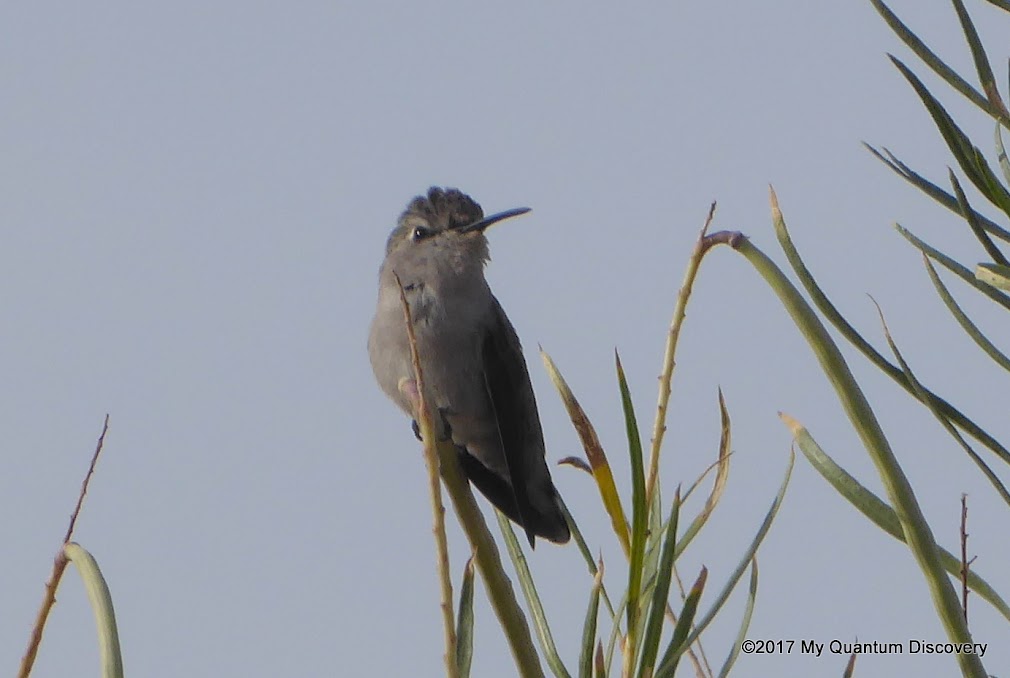 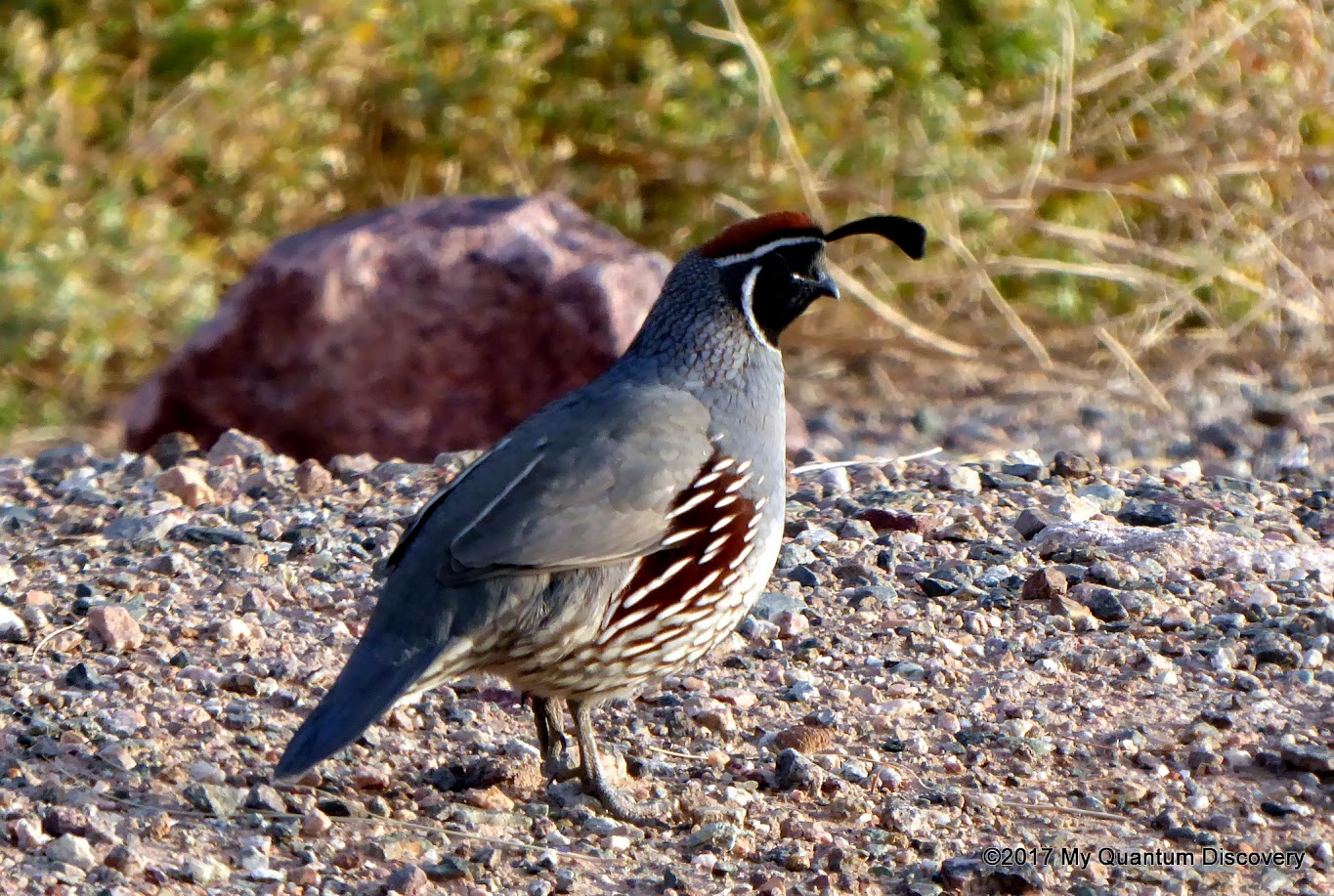 If fish are of interest, then a visit to the on site Willow Beach National Fish Hatchery is a must. It is open to the public Monday – Friday, 9:00 a.m. to 3:00 p.m. Established in 1959, the hatchery not only raises rainbow trout (they produce about 150,000 annually) but it also works with two endangered species, the bonytail chub and the razorback sucker (only found in the Colorado River Basin). All of these fish were negatively impacted by the installation of dams. 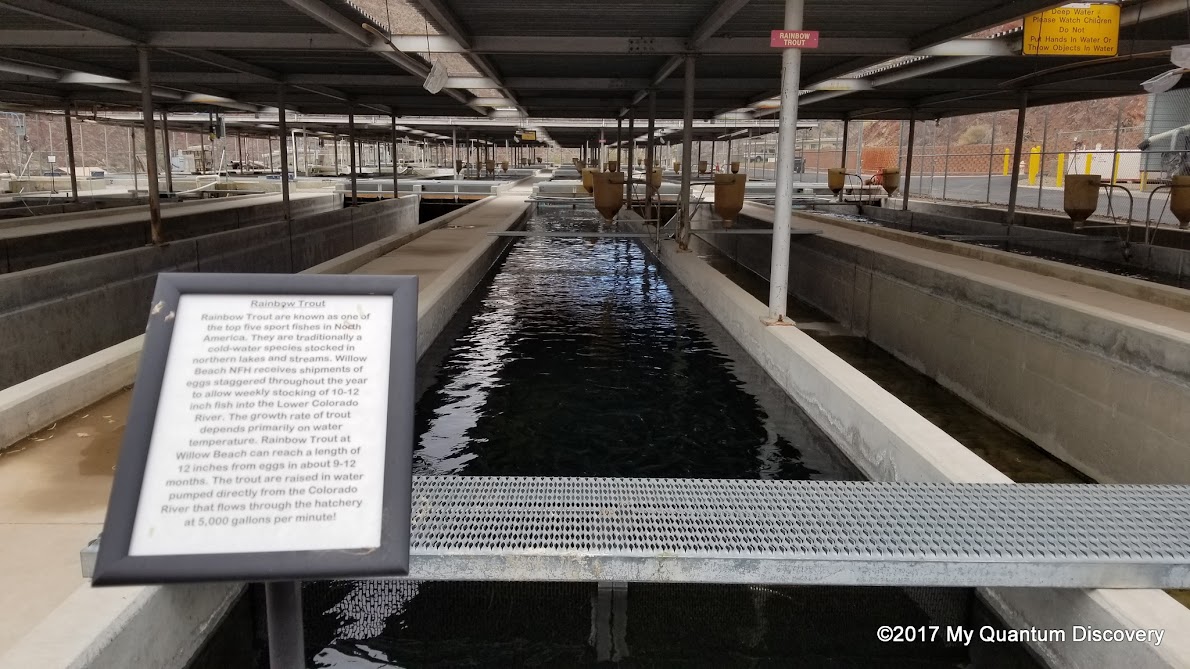 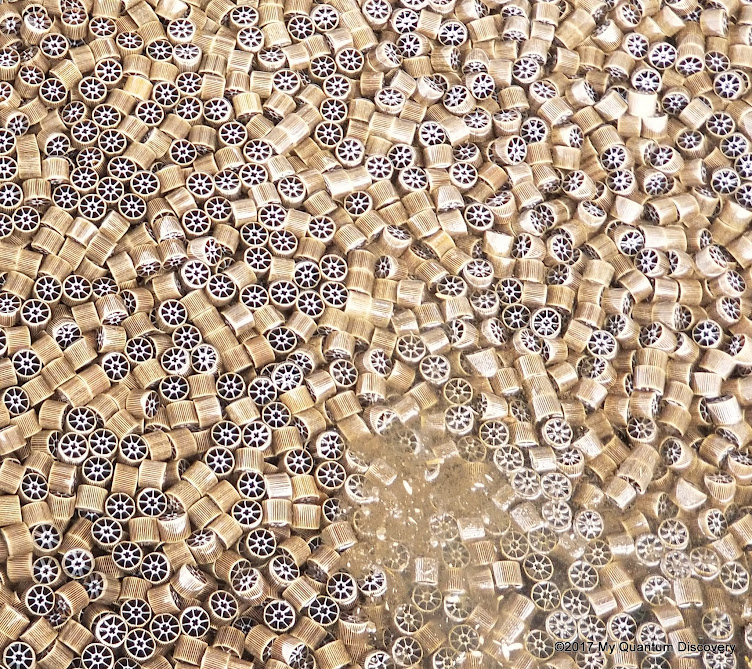 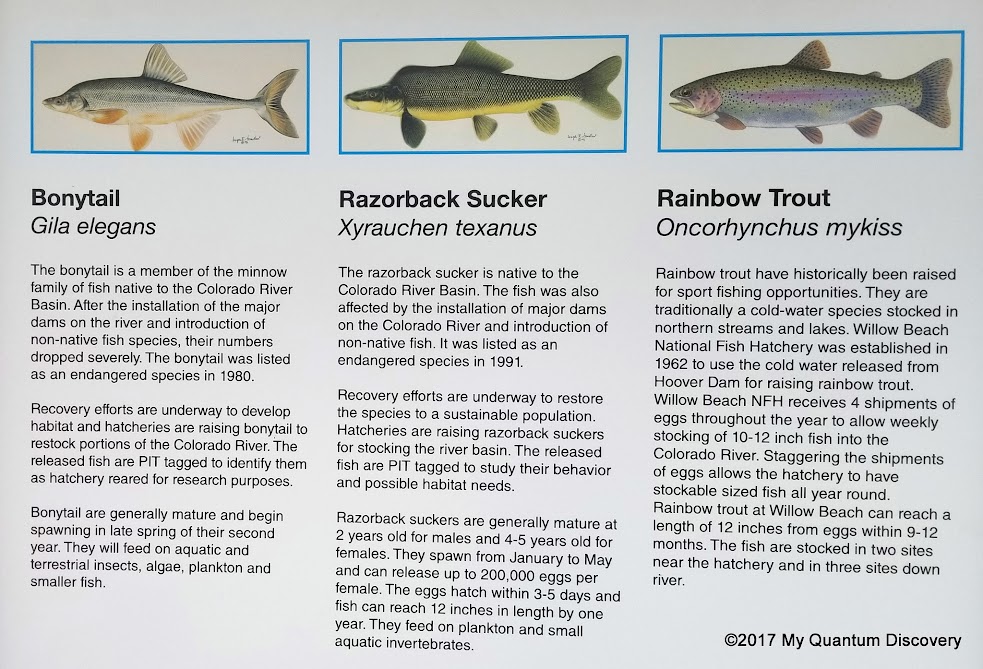 The outside fish rearing facilities consist of 40 concrete raceways which had fish of all sizes and ages. Some of the tanks also had funny looking round things floating in the water. Glad there was a sign describing what they were because we had no idea. These were “bio balls”, a shorter name for biological filtration media which are used to maintain water quality in the semi circulating water.

Every Friday Rainbow Trout are released to the Colorado River. They are sucked up into a distribution truck using a fish pump, similar to a huge vacuum and totally harmless to the fish. The truck is then driven to a spot along the river where they are to be released. Want to see how it is done? Check out this YouTube video! You might be as shocked as I was to see all the fishermen sitting on the banks of the river waiting to catch a trout or two. Sure didn’t seem fair to me although it is supposed to be catch and release. I wonder!

A slightly different process is employed, however, for the Razorback Suckers. Because their habitat is in sheltered coves which are not accessible by distribution trucks or any other means, these fish are pumped into a barge, then released into the coves.  Quite an interesting place!

But as entertaining as nature, the hatchery and the wildlife were at Willow Beach, we had places to go and things to do!

Lake Mead National Recreation Area, with its gorgeous landscapes and dazzling blue water, is known as America’s first playground. It was created when Hoover Dam was completed in 1936 and was expanded to include Lake Mohave when Davis Dam was completed in 1951. In 1964, both lakes became part of the first national recreation area in the National Park Service. Today the 1.5 million acres of the Recreational Area attract over six million people per year, beckoning them to not only visit Hoover Dam but also to enjoy fishing, swimming, boating, hiking and exploring the Mojave Desert (in cooler weather). With all the focus on Lake Mead, it was interesting to learn that the desert makes up 87% of the park, water makes up the rest.

A few stats about Lake Mead:

As we drove on US-93 on the way to several of our sightseeing excursions, we passed under several overpasses. Hmmm, that’s strange! Didn’t look wide enough for vehicles. Out in the middle of nowhere so definitely not a pedestrian bridge. No road leading up to or away from the bridge. So what were these for?

The mystery was solved when we stopped at one of the scenic overlooks! These are wildlife overpasses, specifically built in 2010 for Bighorn Sheep so they can cross the highway safely. They are overpasses and not underpasses because the sheep prefer to be elevated. Although this particular area has the largest contiguous herd of Bighorn Sheep in the United States, we never saw any of them on the bridge! 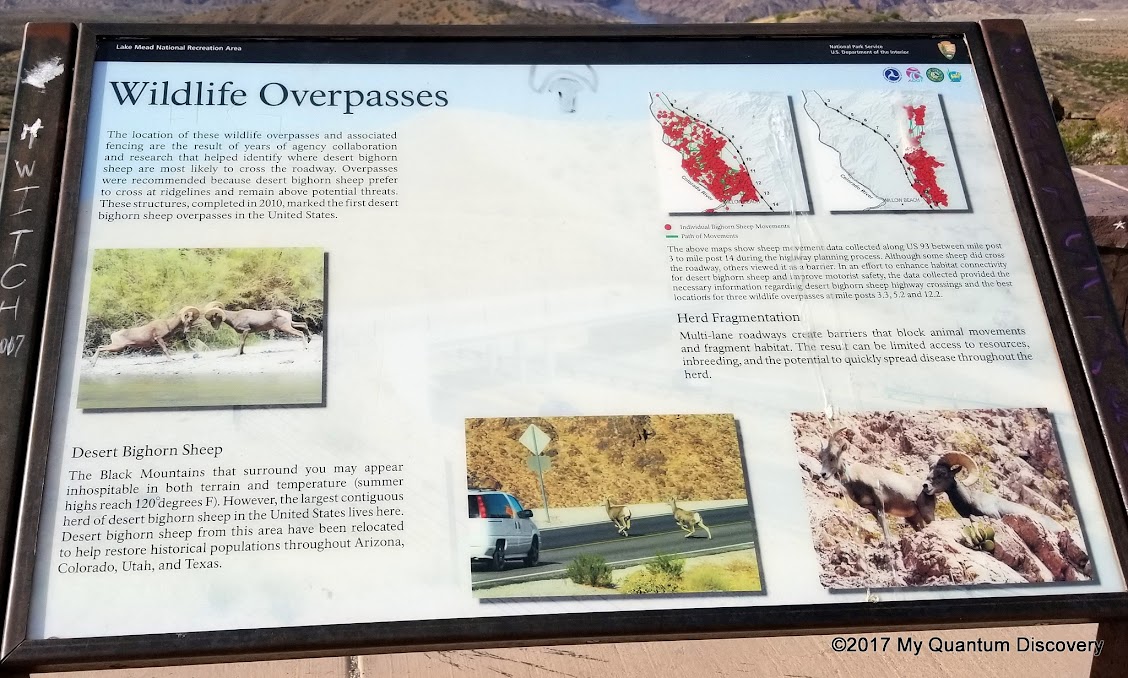 When the government announced plans to build what was then known as Boulder Dam (now Hoover Dam) during the Great Depression in the harsh desert environment, thousands flocked to the area looking for work. Initially they lived in ramshackle edifices collectively known as “Rag Town” under extremely harsh conditions. However, the sheer scale of the dam and duration of the project required the Bureau of Reclamation to consider the construction of a semi-permanent town rather than a temporary arrangement. Created in 1932, Boulder City was an exceptionally  rare example of a town fully planned under government supervision. In 1933, the Boulder Dam Hotel was built to accommodate visiting government officials and project managers. Today the hotel houses the Boulder City/Hoover Dam Museum (free) and was placed on the National Register of Historic Places on Aug. 19, 1982. It was surprising to learn that the Federal Government owned the entire town for nearly 30 years until January, 1960 when the town was turned over to the State of Nevada.

In search of breakfast, we made our way to the historic district of this little town. Quite a charming place with over 400 vintage structures including shops, restaurants and galleries! Unique art sculptures lined the street. Interesting that today Boulder City is one of only two Nevada cities that do not permit gambling (the other is the town of Panaca)! 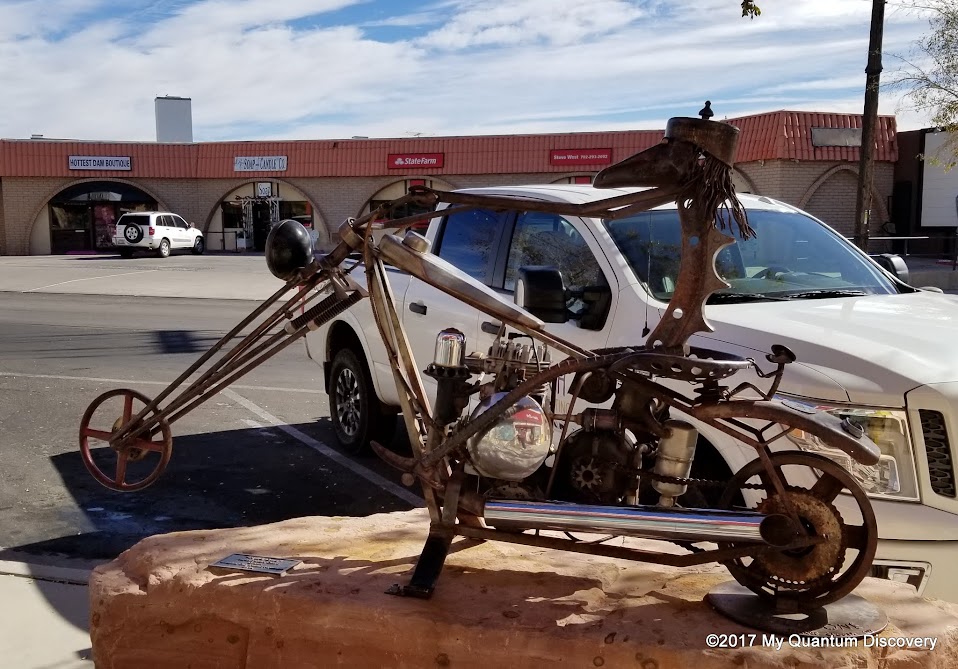 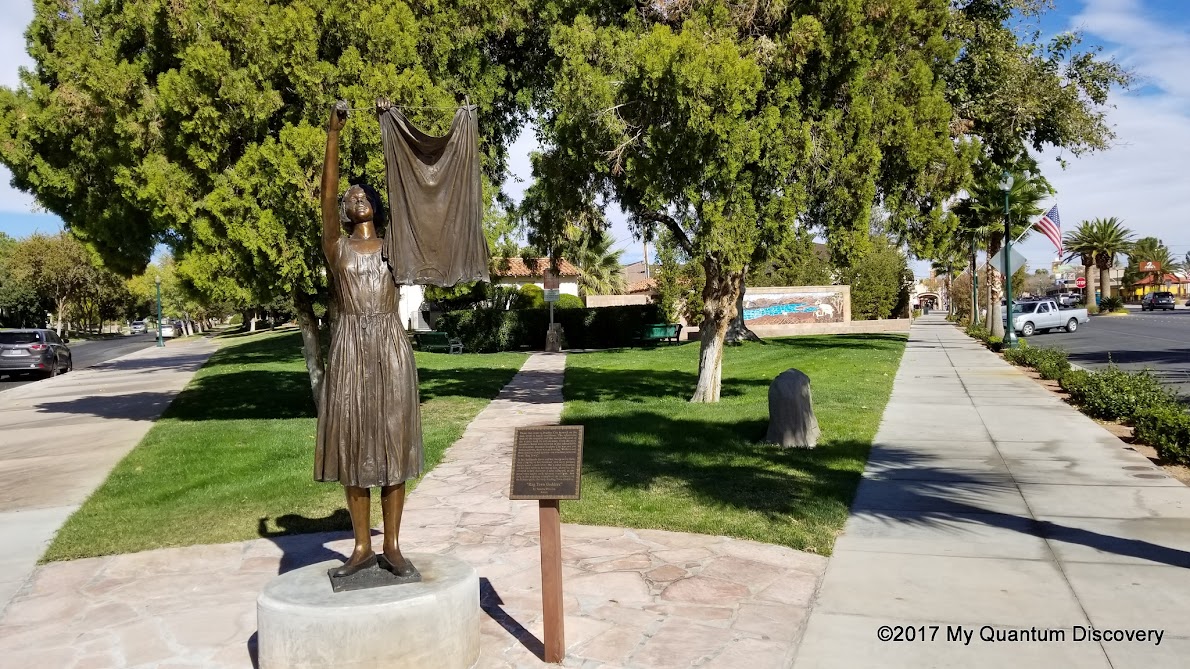 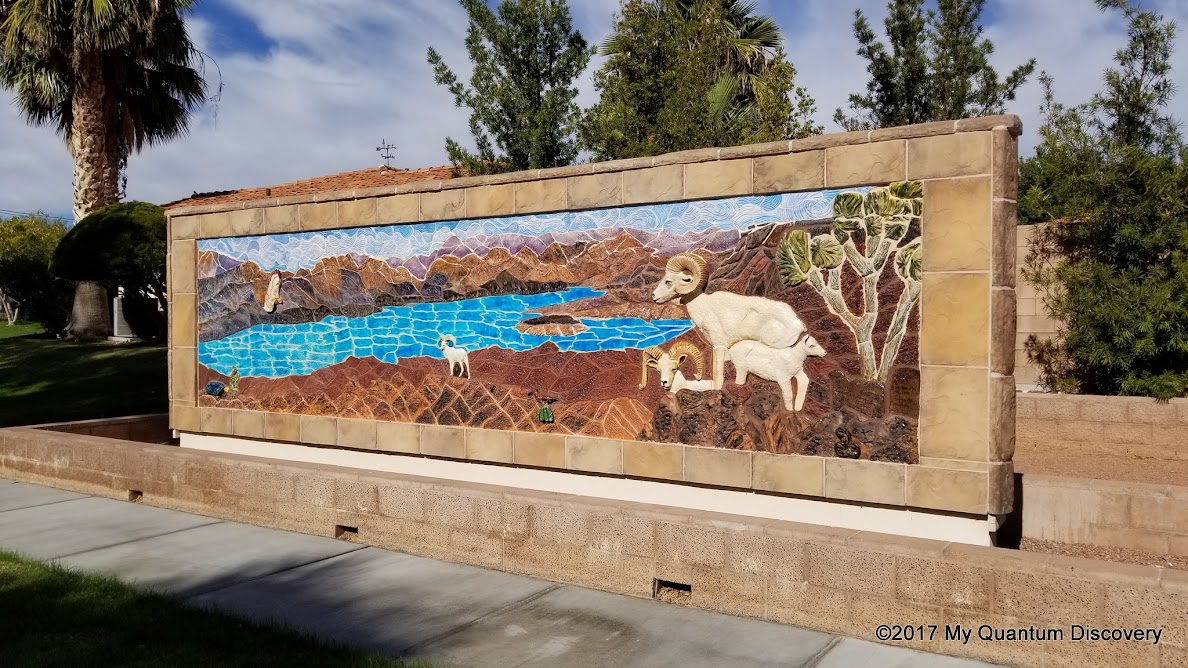 We didn’t know it at the time but there is a self guided walking tour of Boulder City. Darn, we missed the statue of Alabam, the Toilet Paper Man!

It was here that we found two breakfast joints, both with good reviews, that we wanted to try. Oh, dear which one to go to! The very cute Coffee Cup Cafe which was featured on the first episode of Diners Drive Ins and Dives won! The usual hash and eggs ($8.75) for Rob, a Cali Omelette (Spinach, Mushrooms, Tomato, Green Peppers, Onions, Avocado, Pepper Jack Cheese $9.75) for me. Both were excellent! 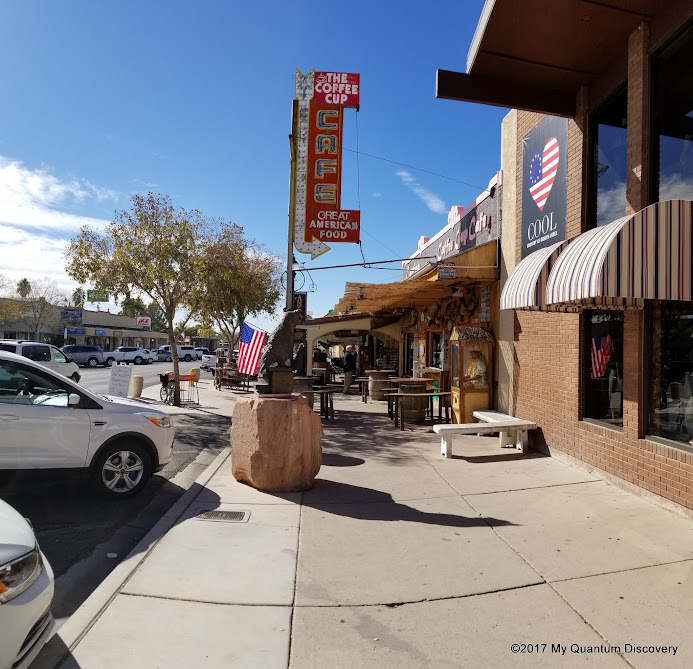 On another morning we made our way here again, this time to the Southwest Diner where “homemade is their specialty.” Our breakfast choices were a little more adventurous – Huevos Rancheros for me and Chili Relenos for Rob. Both dishes were $9.95 and delicious! Both restaurants were excellent but guess if we had to choose, we would return to the Southwest Diner first. 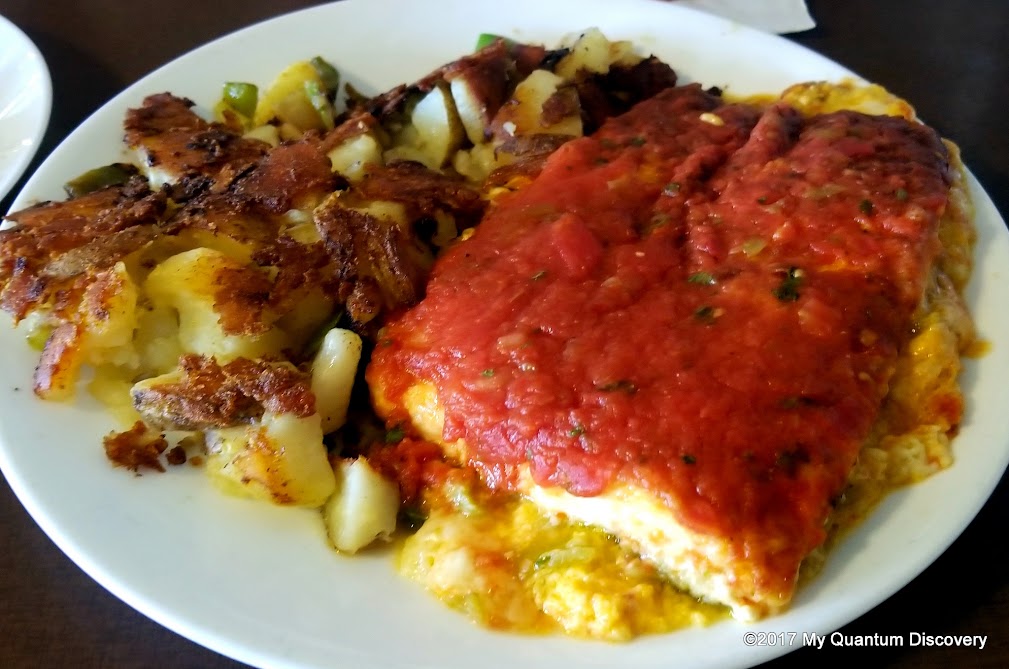 Over one of our breakfasts, we reminisced about a previous trip to the area in the late 1980’s on a work related trip when we visited both Hoover Dam and the Lake Mead area. We both remembered a place we had stopped where the fish were so thick the ducks could actually walk on them. But darn, blogs didn’t exist back then so we have no record of where the heck it was. Not to worry, though, at one of the Visitor’s Center, we asked a park ranger about the fish and ducks. We were told that perhaps it was at the end of 12 mile long Hemenway Road off of Lake Shore Road. Was the mystery solved?

Shortly after exiting US-93 on to Lakeshore Road, we came to a Visitor Center and the parking area for the trailhead for the Historic Railroad Trail on our right. This 30-mile long line of track connected Boulder City with all the facilities (cement mixing plants, quarry pit, gravel sorting plant, etc.) between Las Vegas and the construction site at Hoover Dam.  Massive tunnels had to be built to accommodate the huge pieces of equipment.

Following the completion of the dam, the tracks were rarely used so they were dismantled by 1962. The trail was added to the National Register of Historic Places by 1984. Unfortunately we never found time to walk the trail which I bet would have been pretty neat. 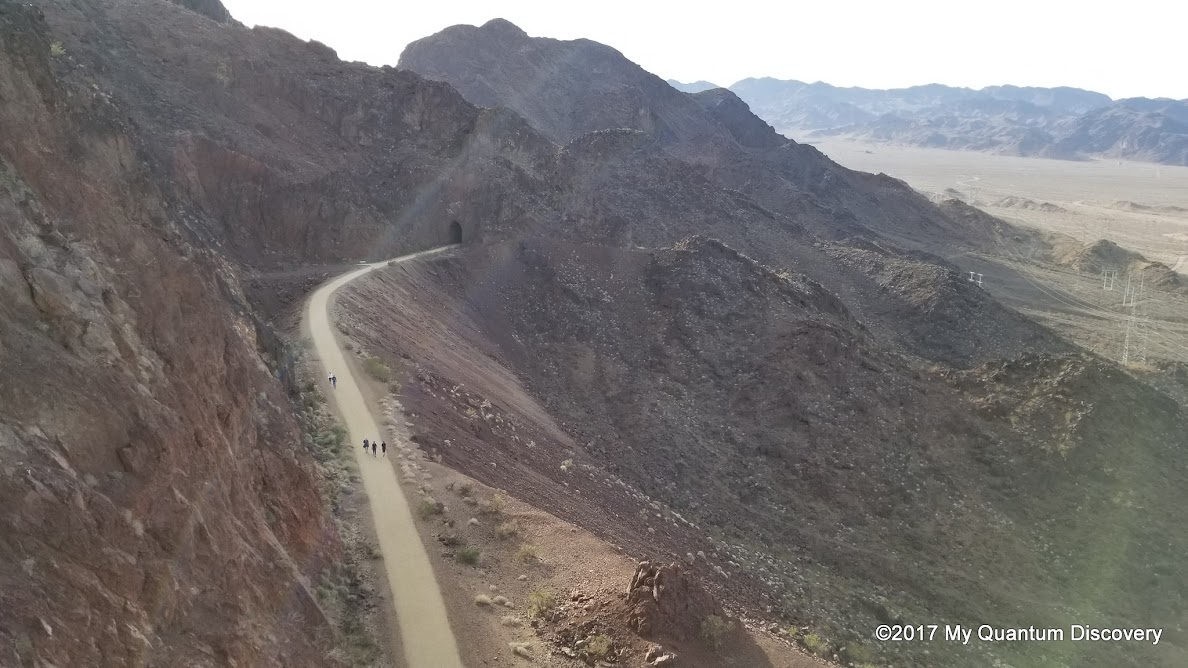 Here are some fun facts taken about the trail from the National Park Service website:

Back to the fish walking ducks, as soon as we turned onto Hemenway Road, we knew we were in the right spot – it looked vaguely familiar. Although it was much more built up than our last visit, there were the hundreds of fish (mostly carp) and ducks all clamoring to be fed. A family with a couple of little kids was there throwing popcorn (which can be bought at the store in the marina) into the water. As the carp clamored to get a tasty tidbit, the ducks would literally walk on the fish! It was so entertaining we stood there for quite some time. 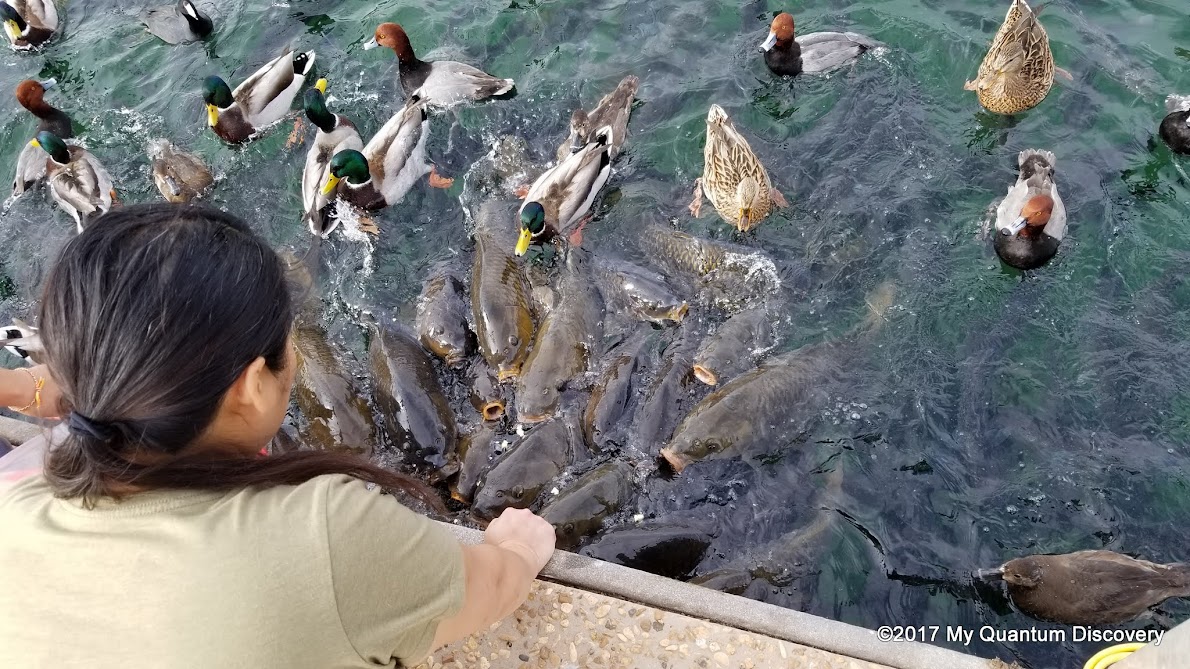 A still photo doesn’t really capture the feeding frenzy so check out our video of all the action!

Still a lot more to see and do here but more about that in our next post!