Hoover Dam. Oh, my how different things were since our last visit in the late 1980’s! Not the dam itself of course but everything around it. The Hoover Dam bypass road and Mike O’Callaghan – Pat Tillman Bridge was the most obvious change, but security checkpoints and armed guards were not present back then either. Now in the aftermath of 9-11 a security checkpoint has been implemented on the Hoover Dam Access Road on the Nevada side and the old road (US-93) on the Arizona side is barricaded. And on the dam itself, there were armed guards patrolling. How our world has changed since 9-11! 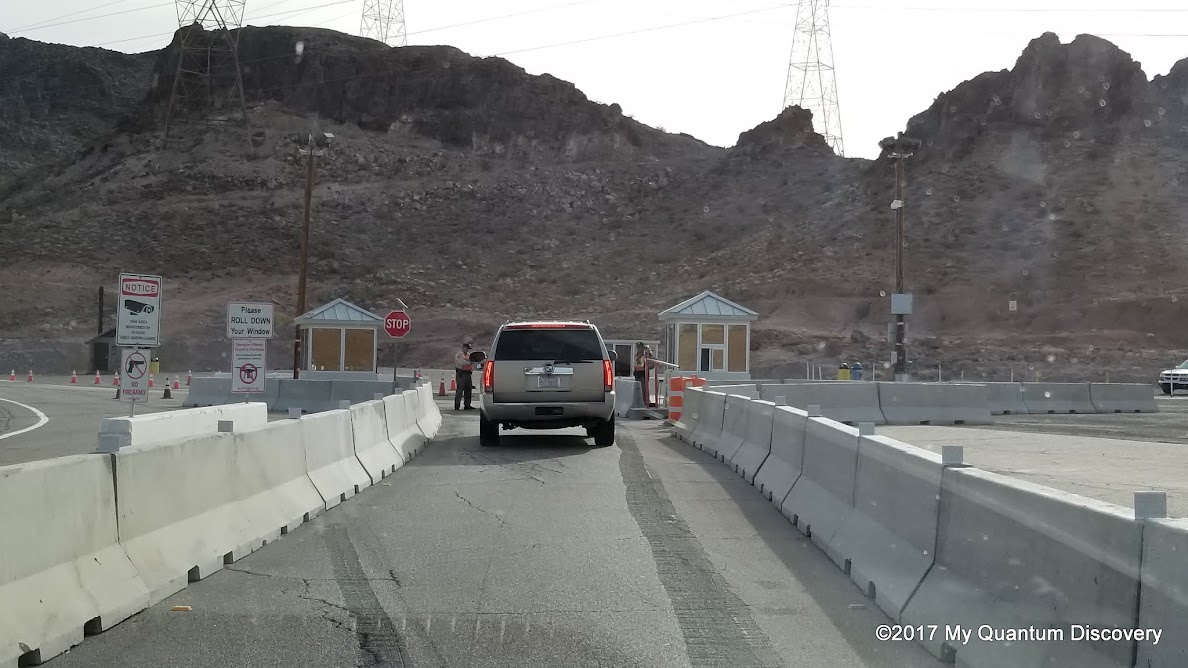 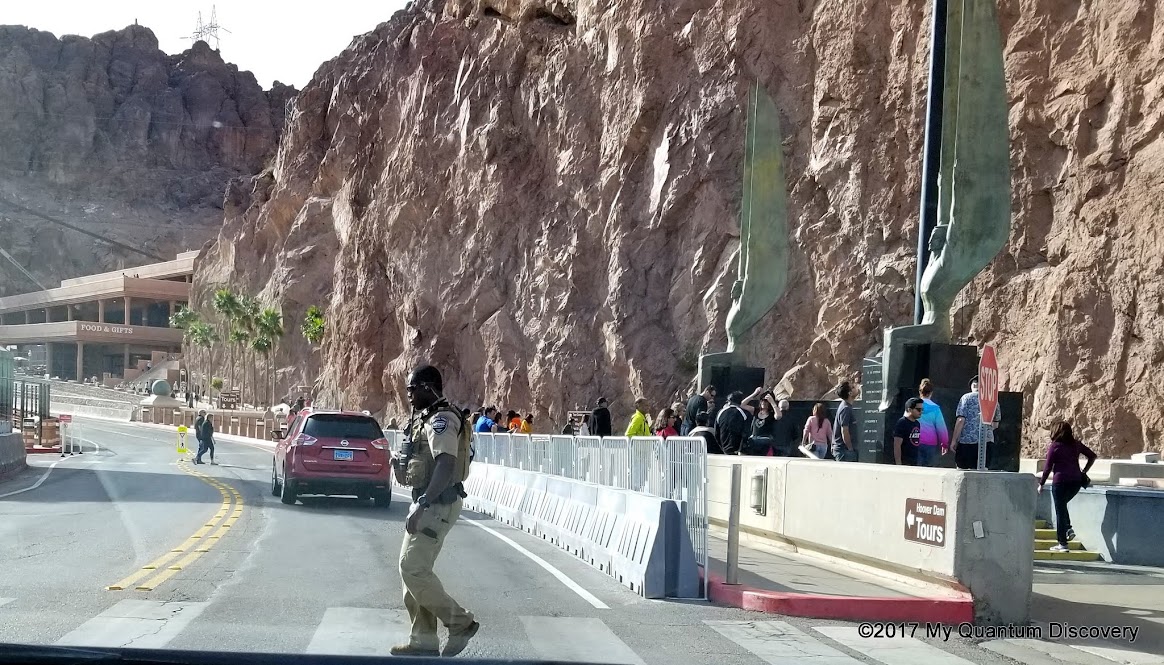 Back then too there was no huge, glamorous Visitor Center, no parking garage, no cafe or souvenir shops. In fact we were able to actually park on top of the dam right next to the elevator where the tours started! A totally different story today! No street parking on top of the dam (or even stopping) allowed, there’s a new five-story garage (459 spaces) built into the canyon wall on the Nevada side across the street from a beautiful Visitor Center that opened in 1995. BTW, the cost to park in the garage was $10. Hint: There are other parking lots on the Arizona side that are free but they require a pretty lengthy walk and usually fill up quickly.

Once again we were in time zone confusion! On one side of the river, it’s Nevada time (Pacific Time Zone) while the other is Arizona (Mountain Time Zone). That is, unless you visit during daylight saving time when both AZ and NV are observing the same time (because AZ doesn’t observe daylight savings time). Got all that? 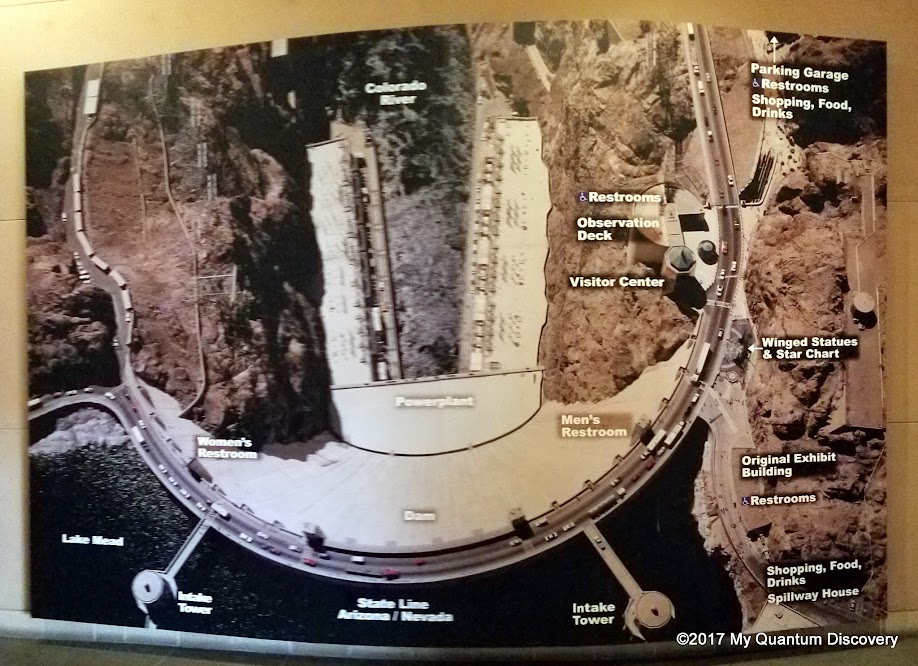 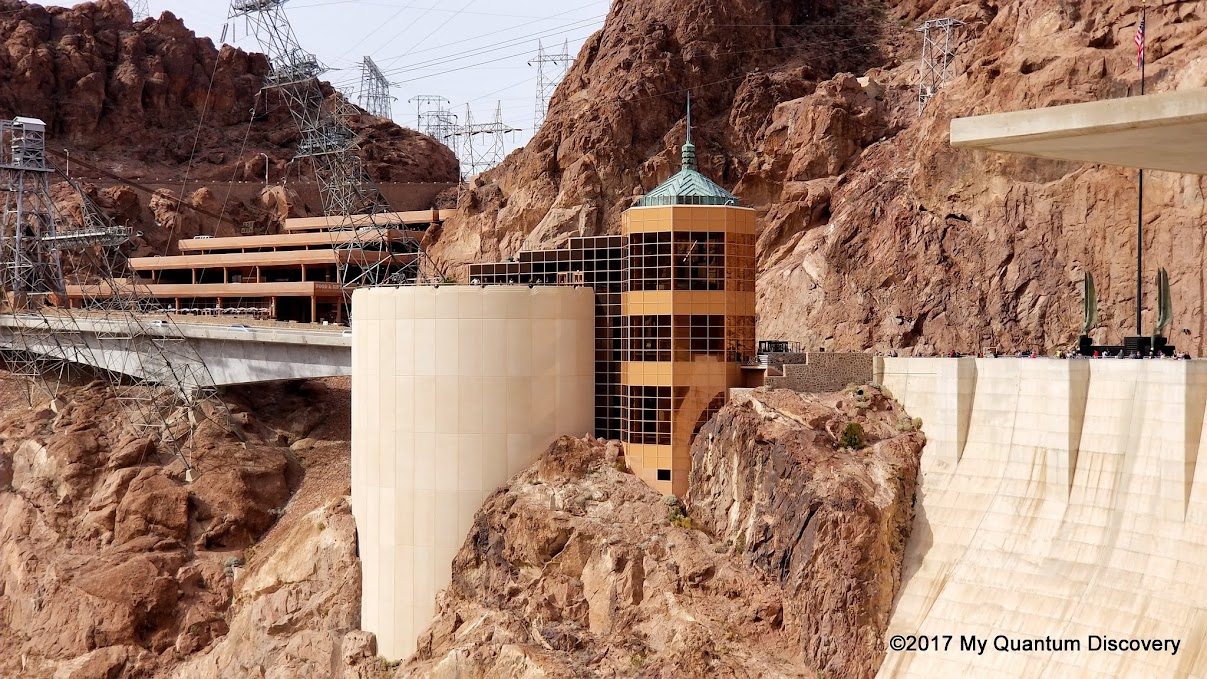 During our 1980’s visit, there was only one tour available which basically took us down the original main elevators of the dam into the powerplant.

Wanting to get a better look at the lesser known parts of the dam, we opted for the Dam Tour and were lucky to arrive early enough to get a booking on the second tour of the day. What an excellent choice! Our tour guide was extremely knowledgeable about all aspects of the dam. Between the tour and all of the exhibits we learned so much it was almost overwhelming! It’s no wonder that Hoover Dam has earned so many awards and titles as seen in the following photo! 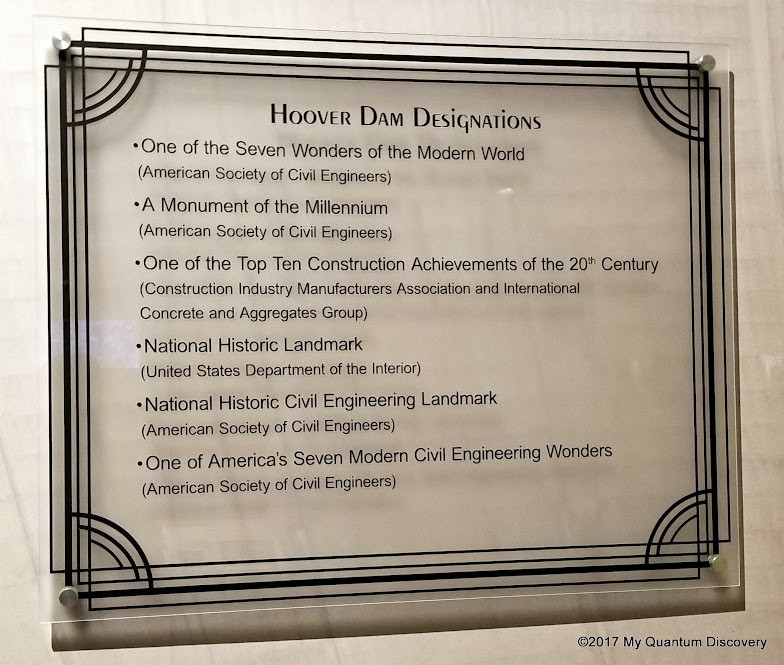 After we purchased our tickets, with a little less than an hour to kill before the tour started, we spent some time looking at some exhibits and watching a 10 minute film in the theater that described the reasons for the dam being built and how it was constructed.

After that, we wandered up to the Observation Deck where we had beautiful views of the Dam and the Mike O’Callaghan – Pat Tillman Bridge (more about that in the next post). 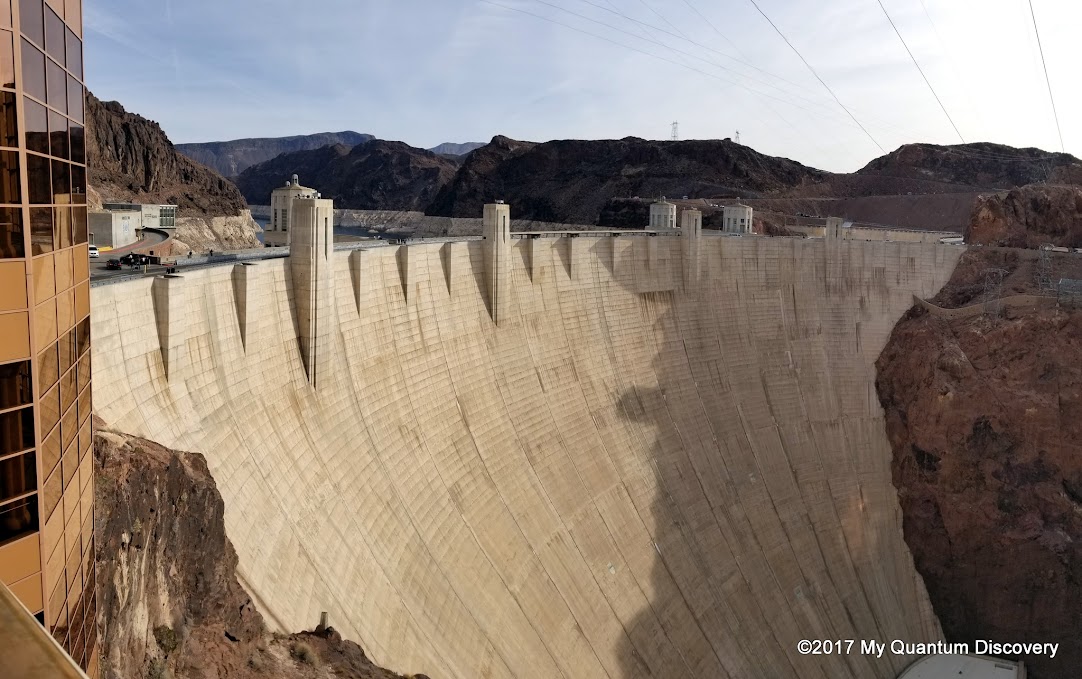 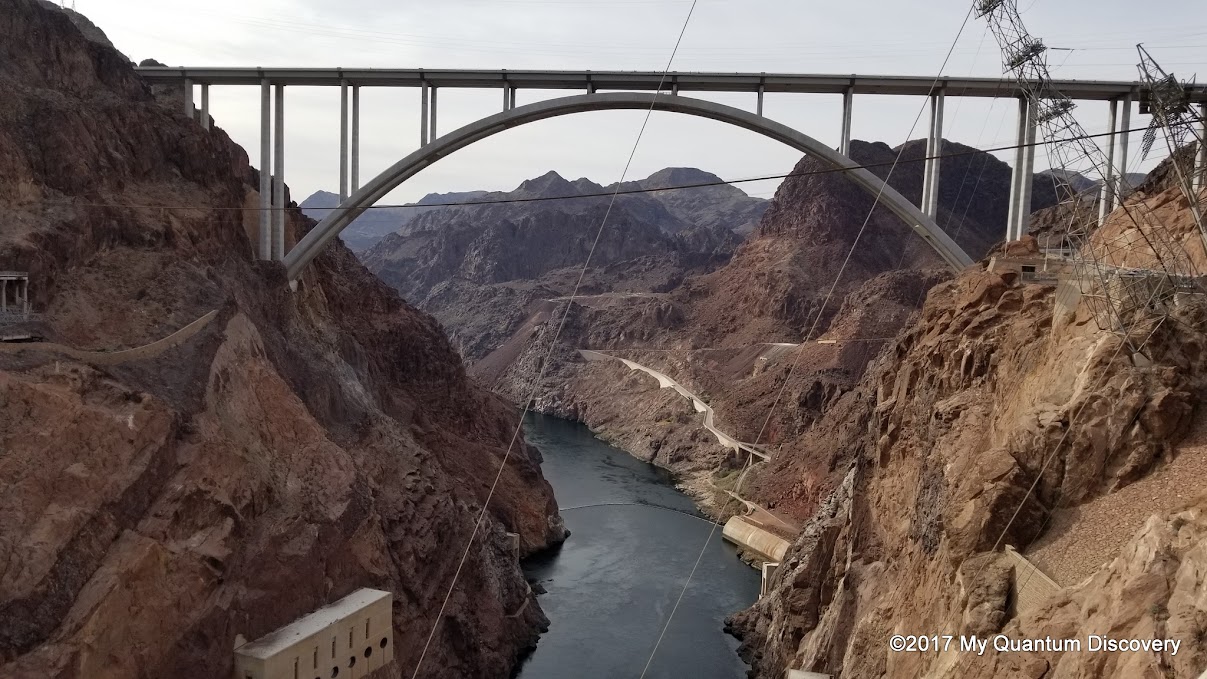 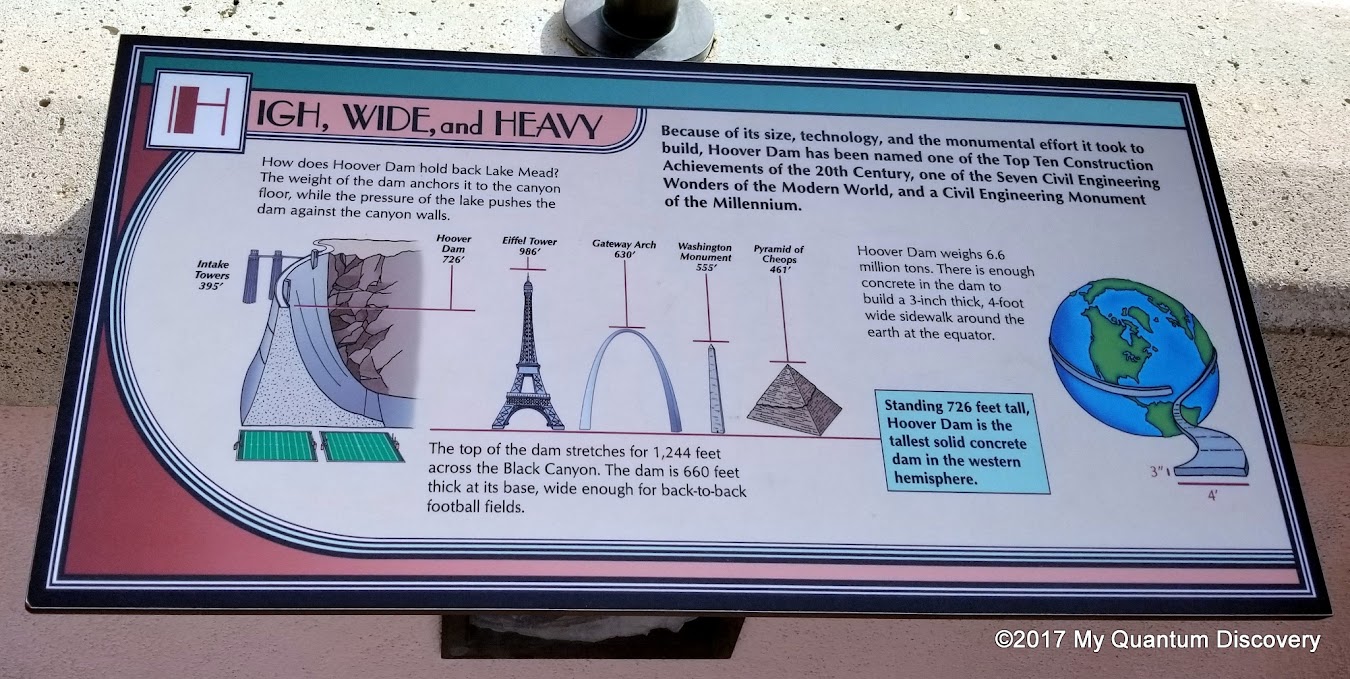 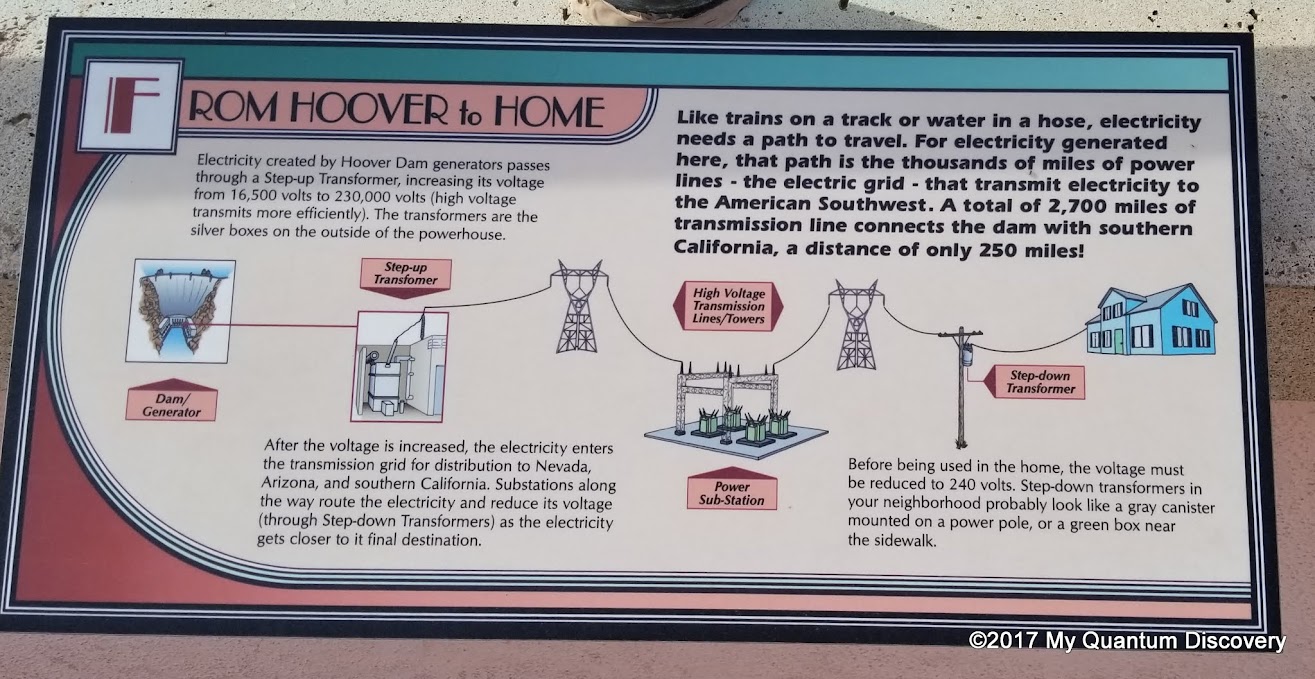 Eventually it was time for the tour to start so we headed back to the tour area. The Dam Tour actually starts off with the Powerplant Tour, so with 78 more of our closest friends we were herded into an elevator for a 70-second ride taking us down 530 feet through the rock wall of Black Canyon.

Disembarking from the elevator, our first stop was the penstock (pipes) viewing area. Here we were atop one (of four) huge 30 foot diameter pipes which can transport nearly 90,000 gallons of water each second from Lake Mead to the hydroelectric generators. 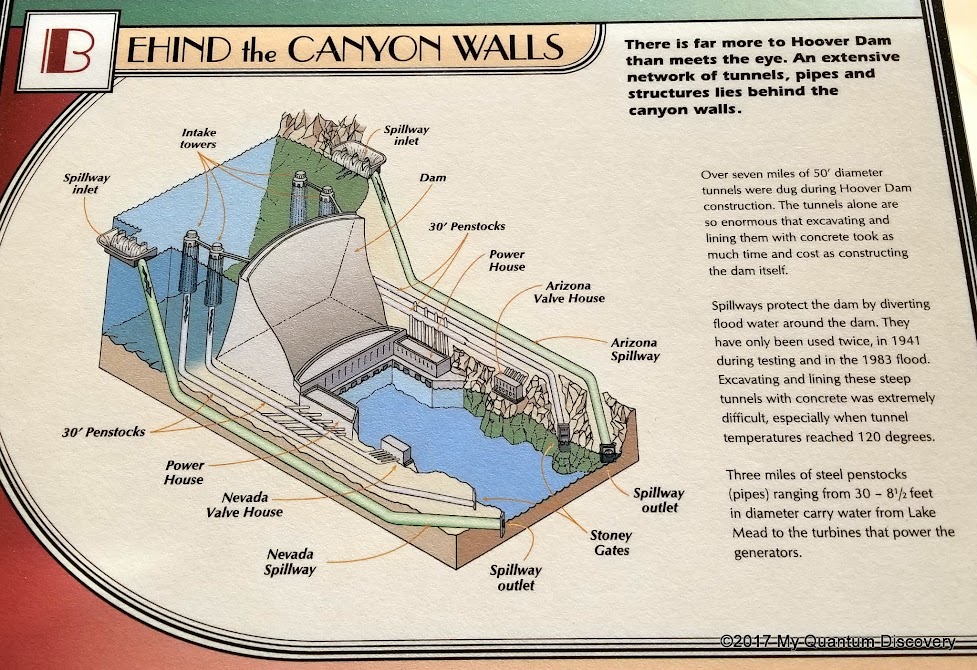 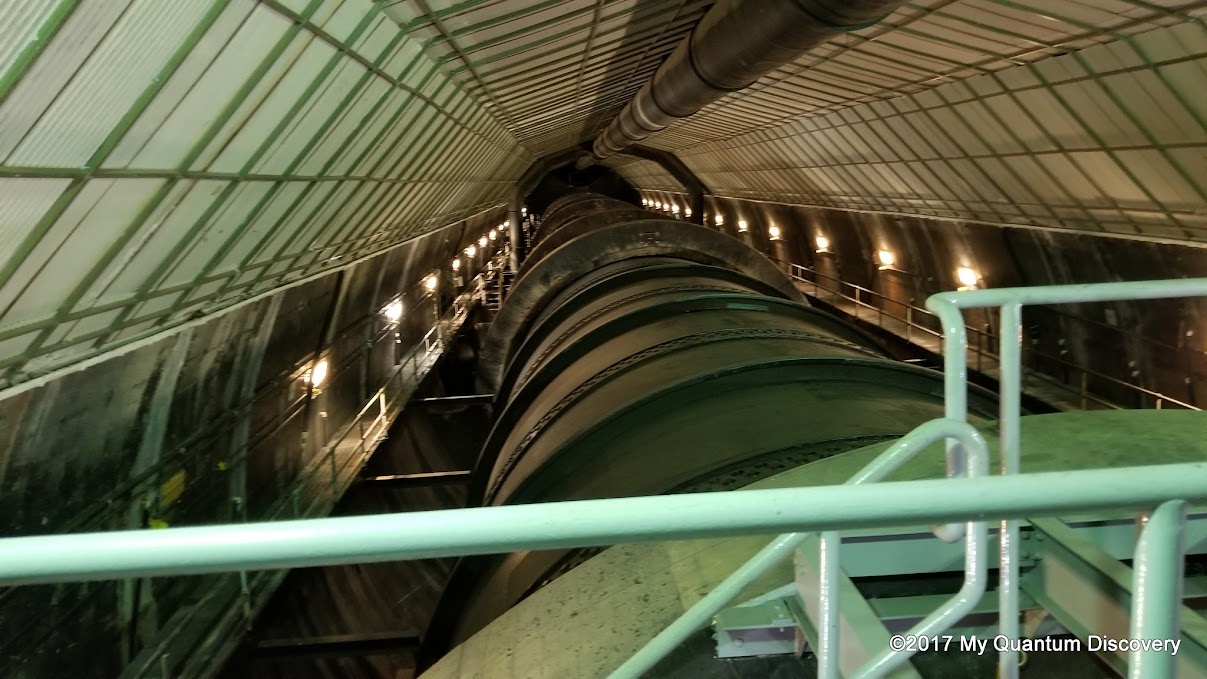 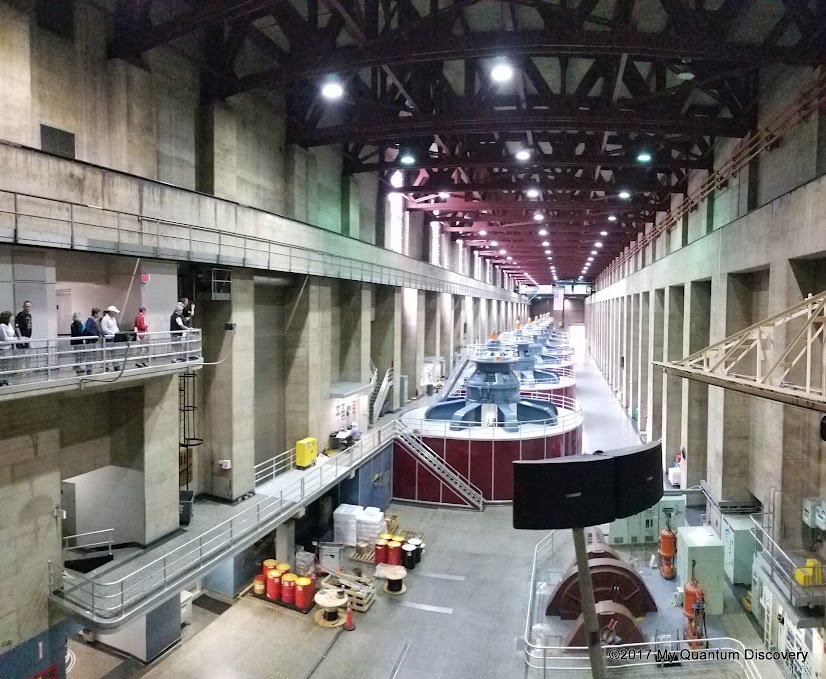 From there, we took another quick elevator ride up to the Nevada powerplant balcony where we had a panoramic view of the 650-foot-long Nevada wing of the powerplant and eight of the dam’s 17 huge generators. Along the way, we admired the beautiful and intricate terrazzo floor designs. 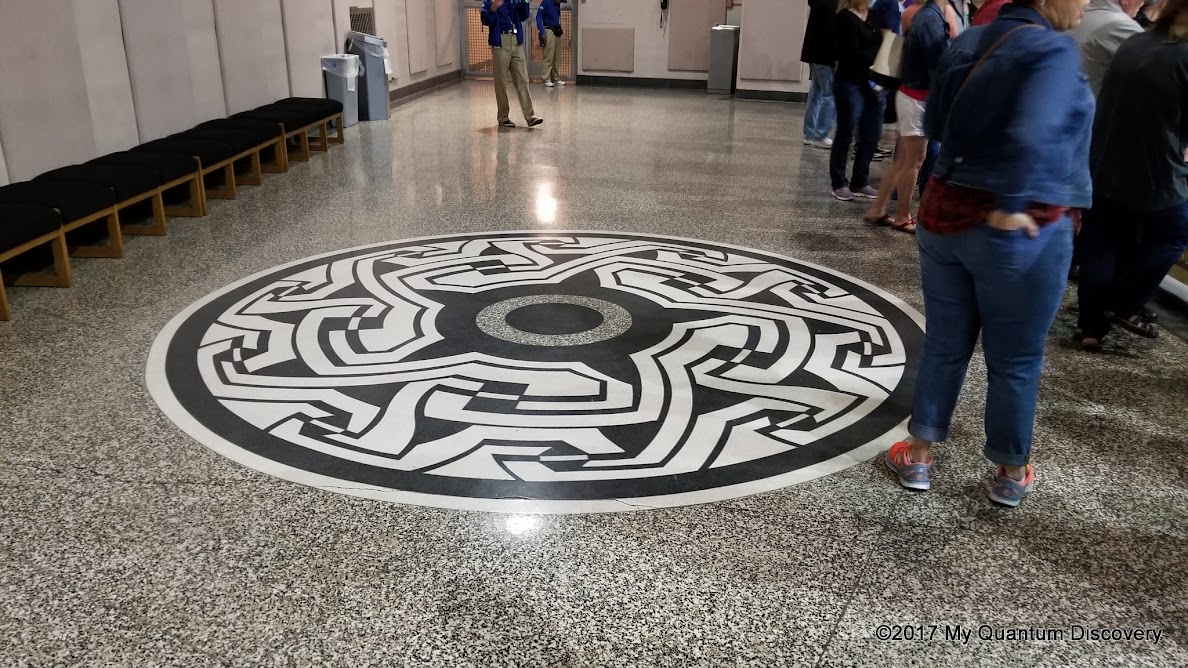 And the subway tile and Art Deco lights that lined most of the corridors. 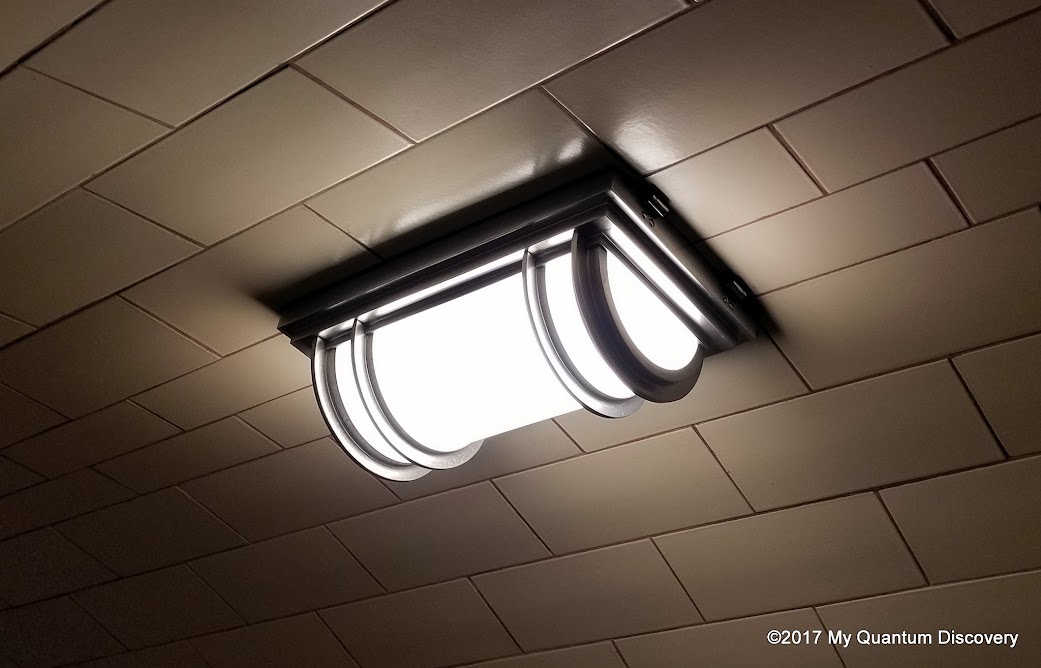 Next, we and 18 other privileged ticket holders, separated from the Powerplant Tour herd and proceeded down some tunnels to the original elevators where we were able to explore some service corridors and air vents. VERY cool stuff!

Another fact we found fascinating was how they cooled and cured the concrete which normally would have taken about 100 years due to its massiveness! To speed up the process, they embedded over 582 miles of one inch steel pipe through the interconnecting concrete blocks that circulated ice water. Brilliant!

What a totally amazing feat this was! For those of you who are like us and love stats, here are some facts that we learned: 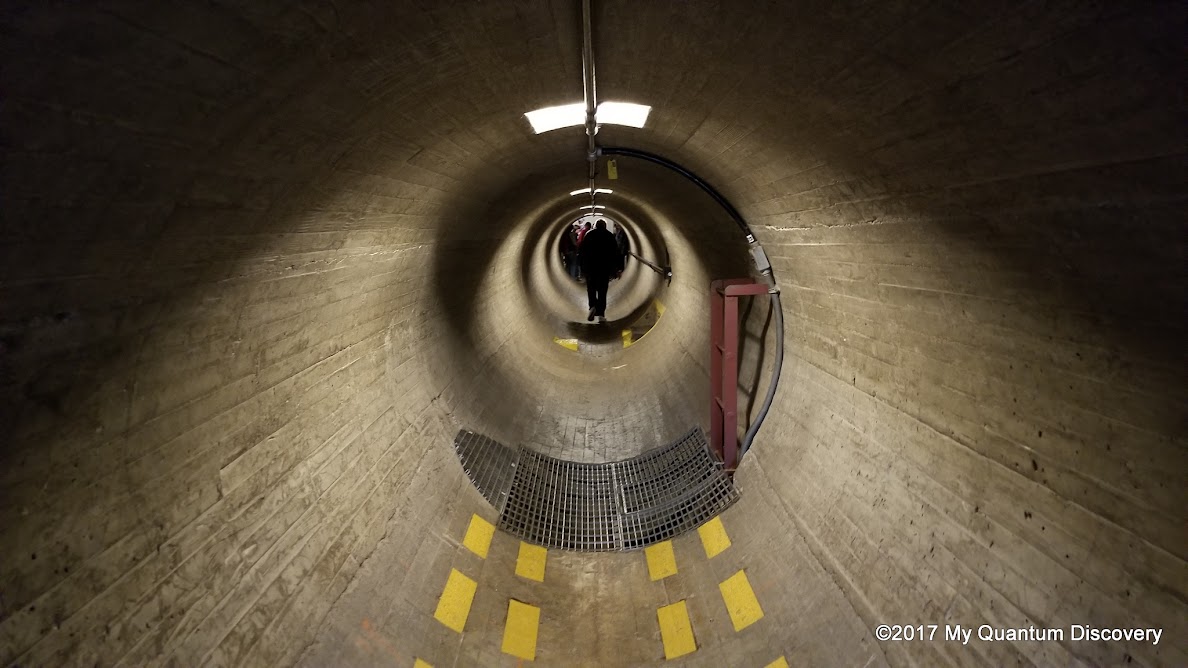 Here we are standing at an air vent at the face of the dam. 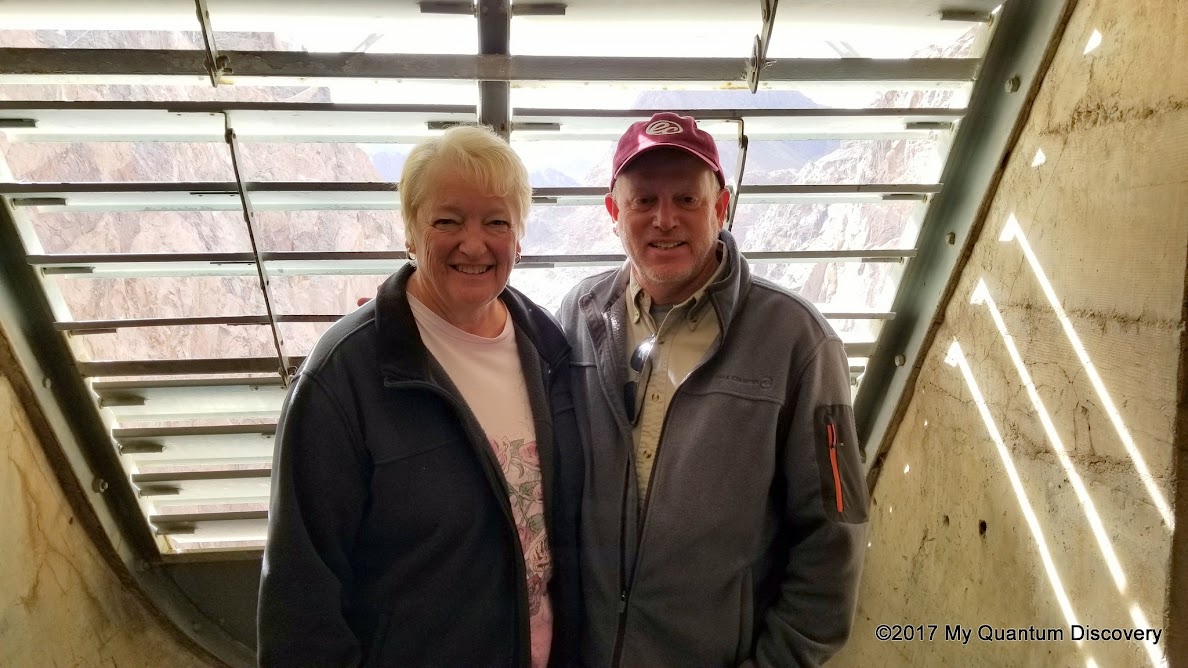 This red arrow in the photo below gives perspective to where the air vent is located. 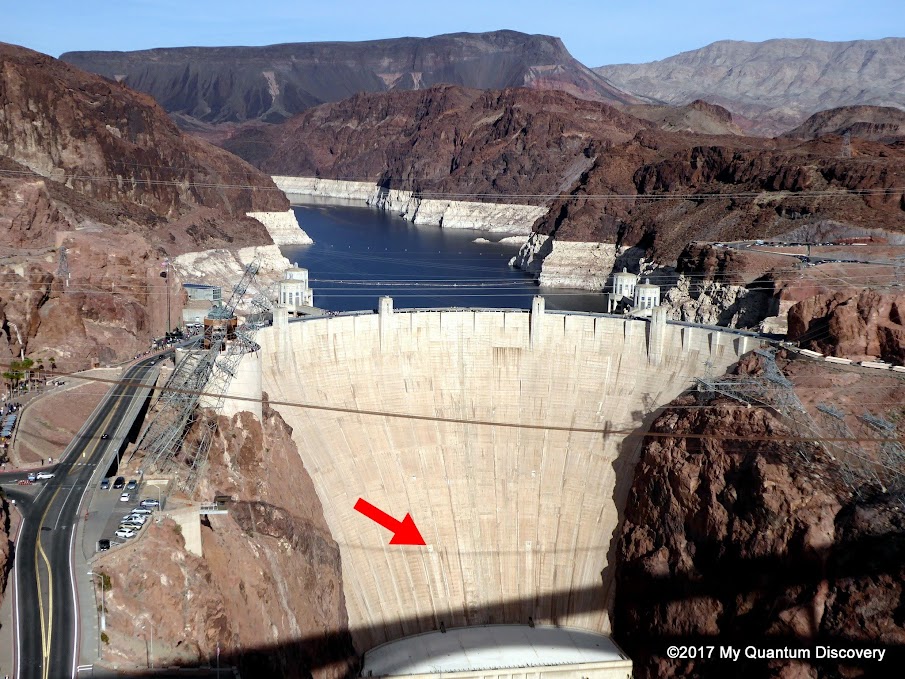 Photo below is just outside the original 20 person elevator at the top of the dam. Even with only 20 of us in that elevator we became, uh, intimate “friends” during the ride. 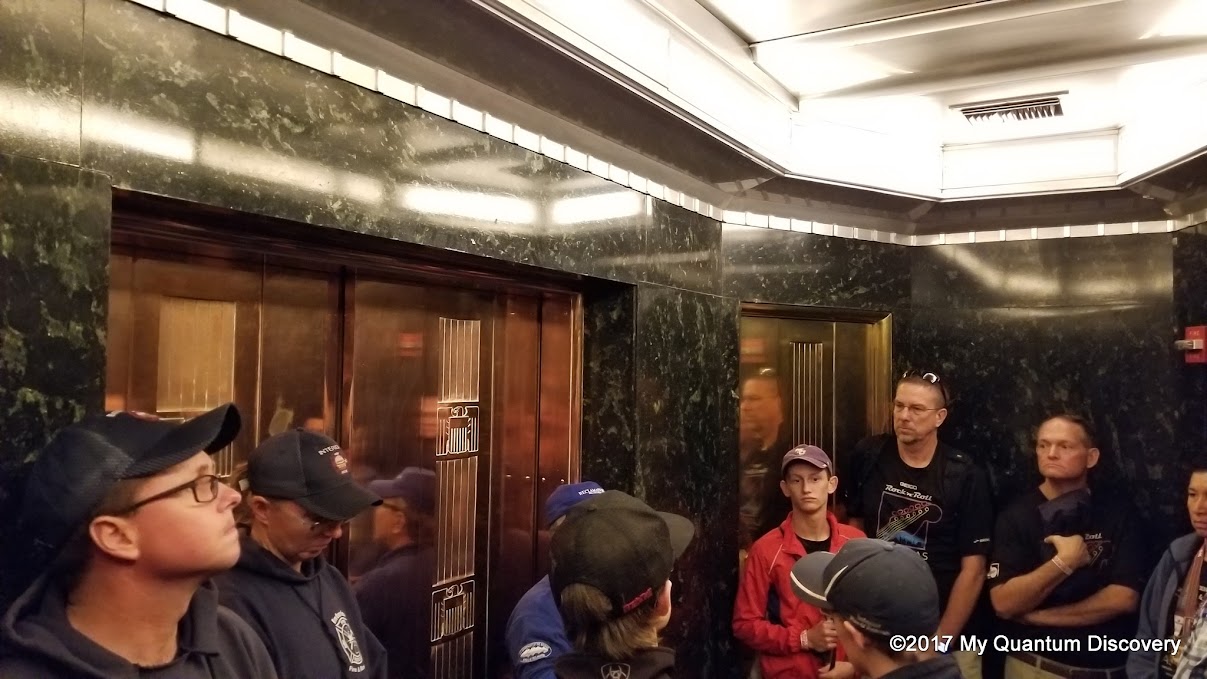 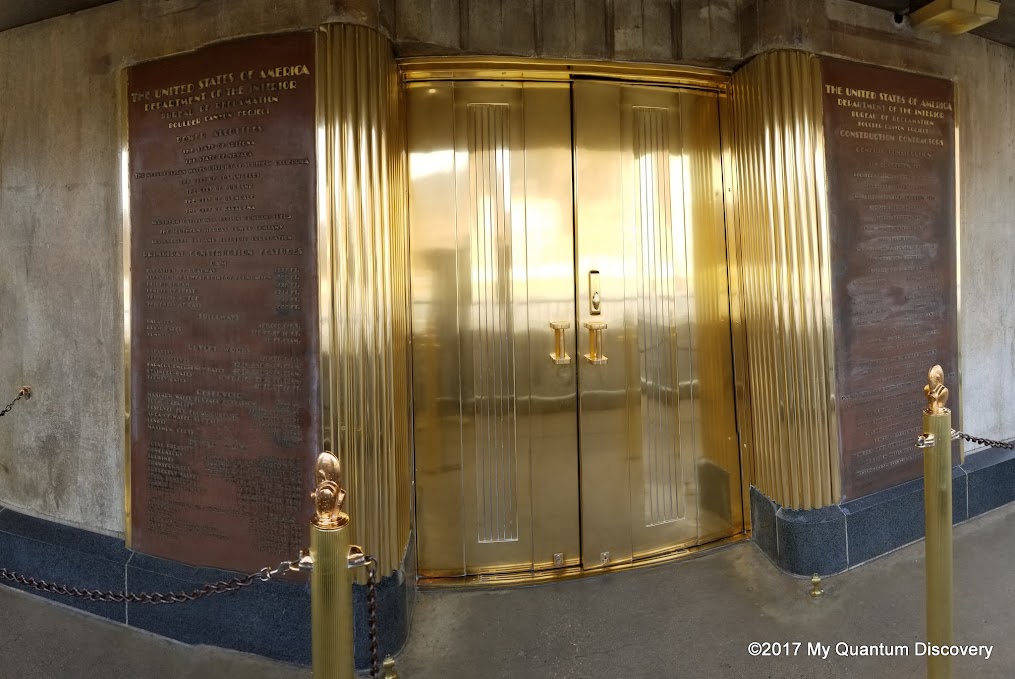 When the tour was over, we walked back to the Visitor Center, along the way stopping to admire the 30 foot high Winged Figures of the Republic sculpture created by Oskar J.W. Hansen which is directly across the street. According to Hansen, they express “the immutable calm of intellectual resolution, and the enormous power of trained physical strength, equally enthroned in placid triumph of scientific accomplishment.”

“The building of Hoover Dam belongs to the sagas of the daring. The winged bronzes which guard the flag, therefore, wear the look of eagles. To them also was given the vital upward thrust of an aspirational gesture; to symbolize the readiness for defense of our institutions and keeping of our spiritual eagles ever ready to be on the wing.” 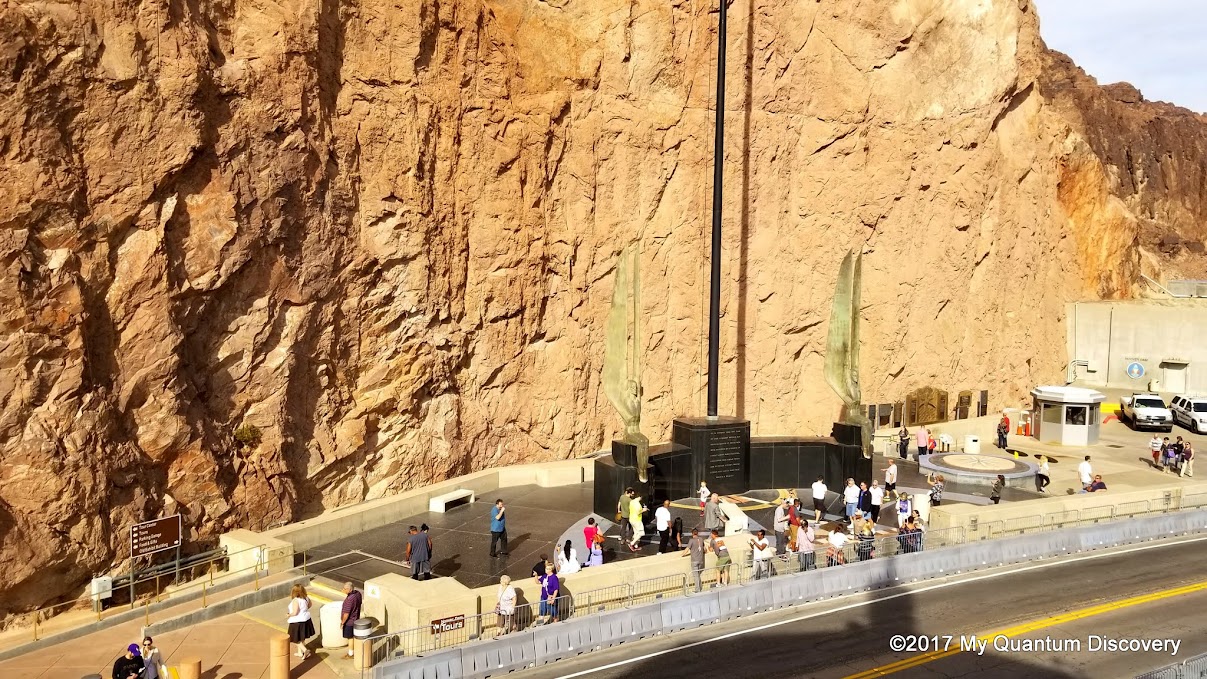 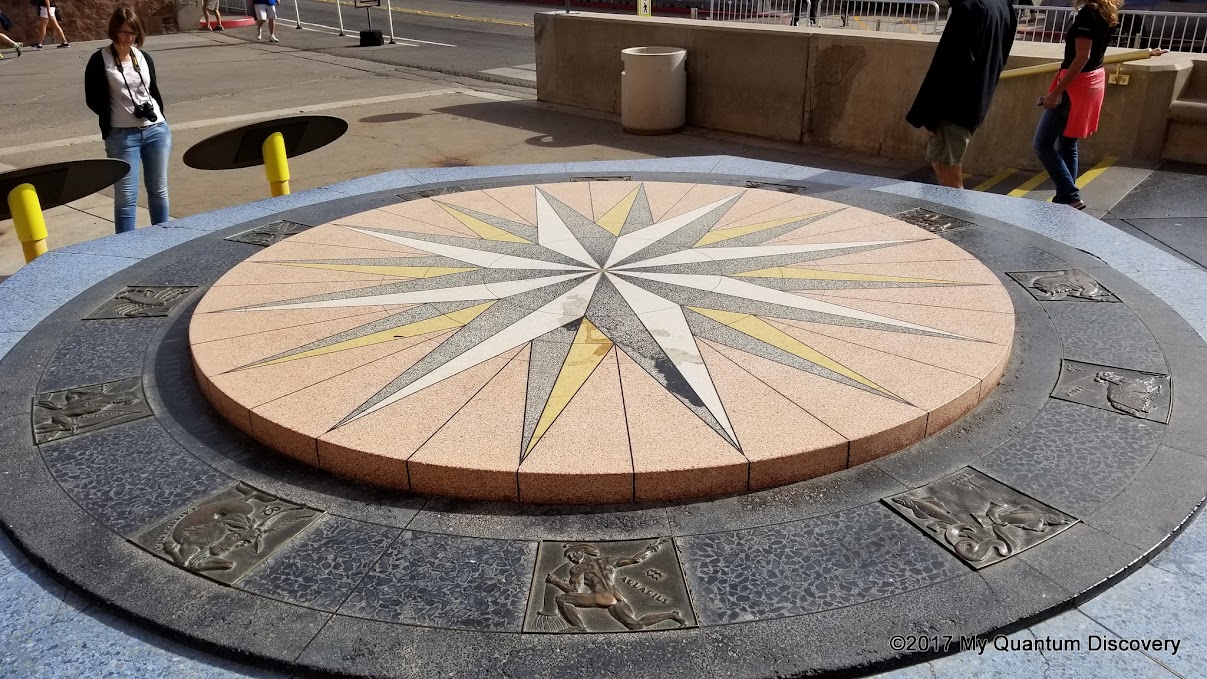 At the base is a “star map” and a detailed compass framed by the signs of the Zodiac. Bronze seals of the seven Colorado River Basin states are also featured in this area. For more info, check out this article.

We walked by the site where the beloved Hoover Dam mascot dog was buried. How touching that the workers built this memorial for the favorite pooch! 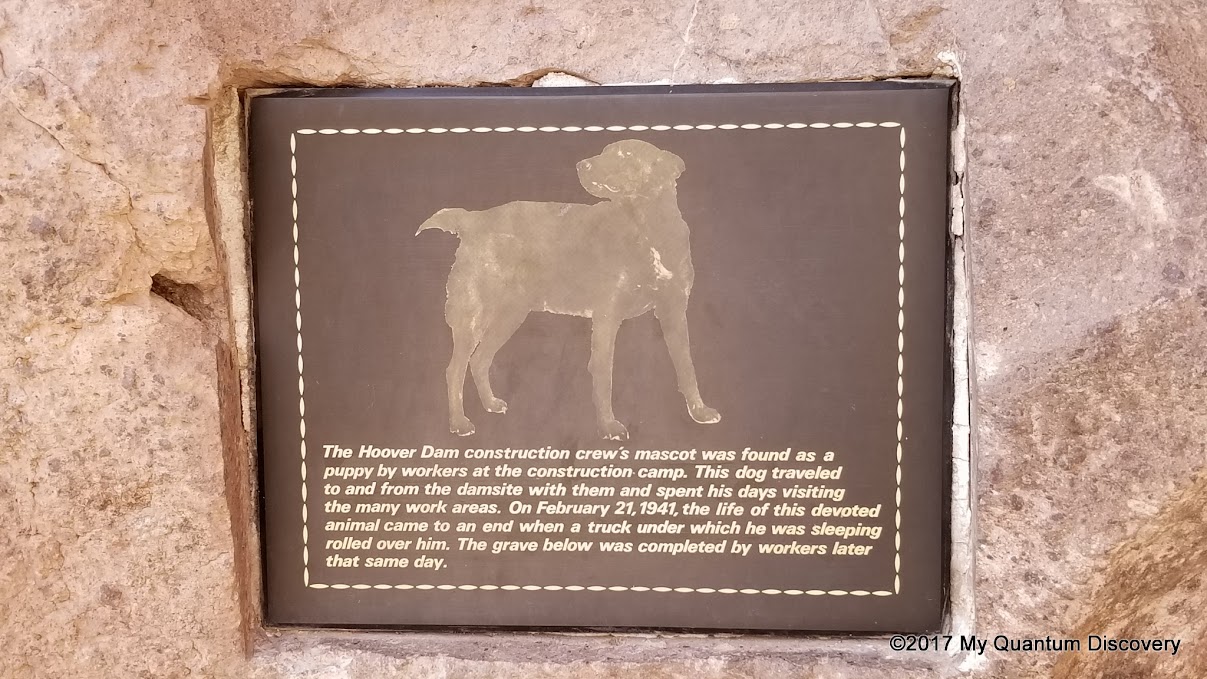 By now we were tired and hungry so we walked over to the High Scaler Cafe located across from the Visitor Center. Outside the building was a larger-than life sculpture of a man scaling a rock wall created in the 1990s by sculptor Steven Liguori, in conjunction with a group of concessionaires who operate the businesses on the government property around the landmark. The figure represents a “high scaler”, dam workers who would dangle hundreds of feet in the air, armed with jackhammers and dynamite.

After lunch, we walked around some more. 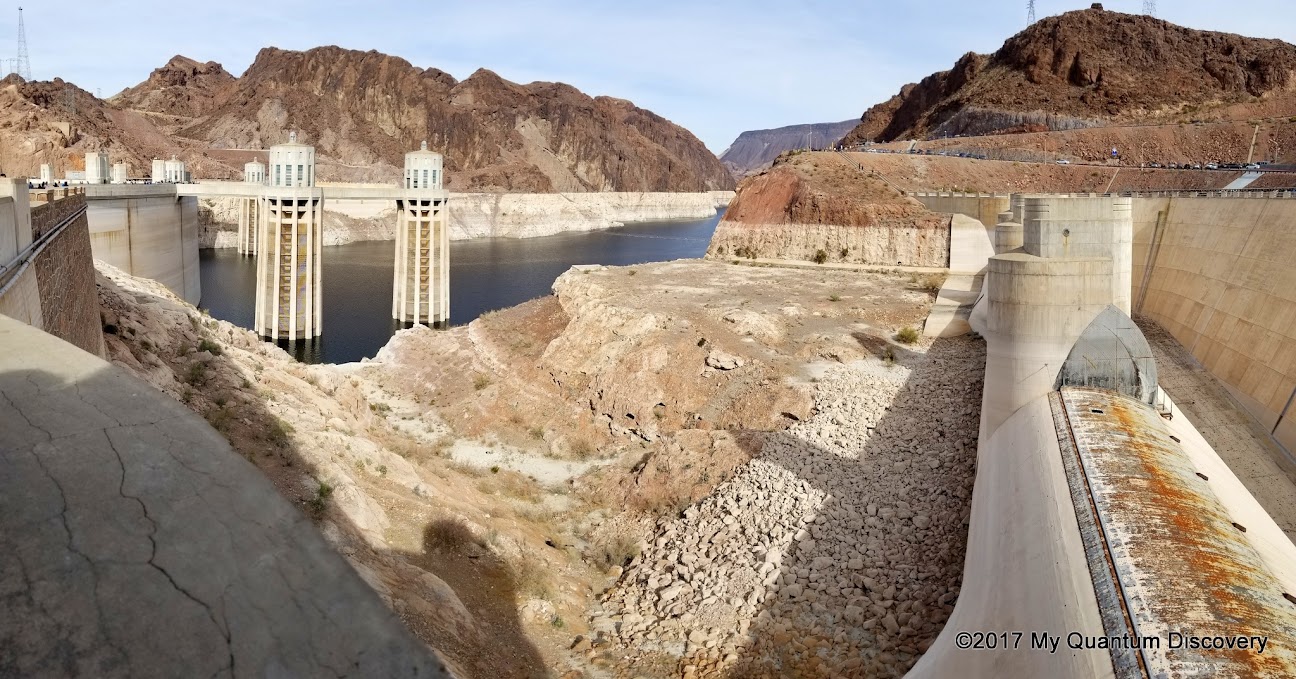 Finally with our feet screaming for relief, we went back to the van, driving up to Hoover Dam Lookout on the Arizona side where we enjoyed panoramic views of the Dam, Lake Mead and the surrounding area. 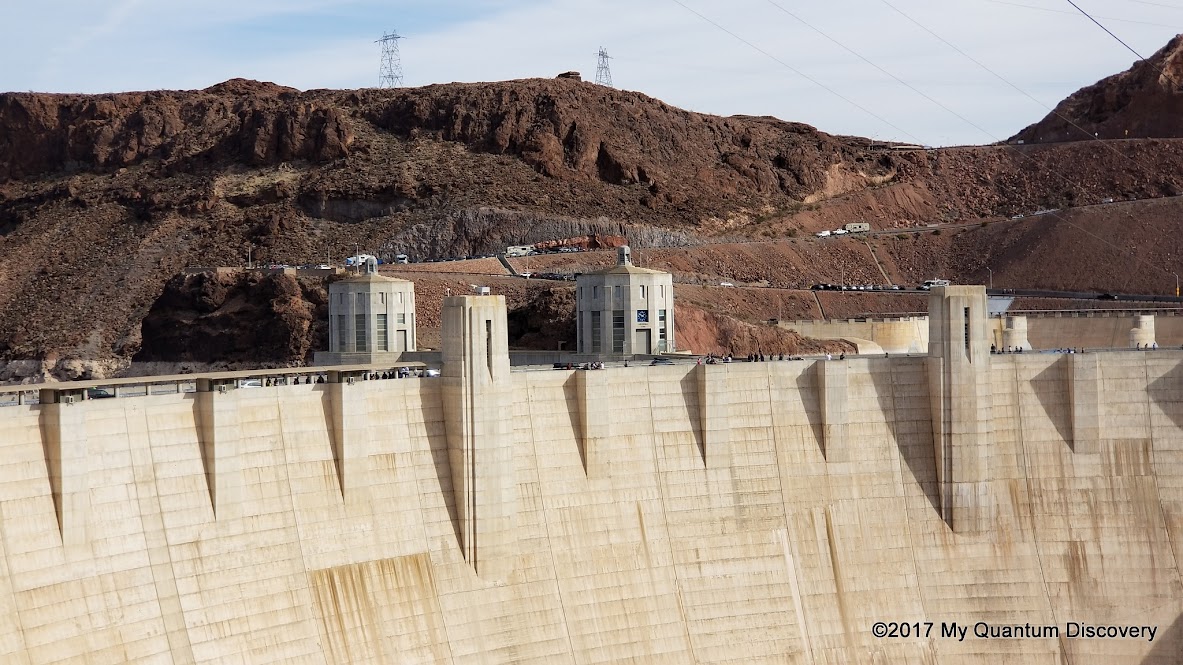 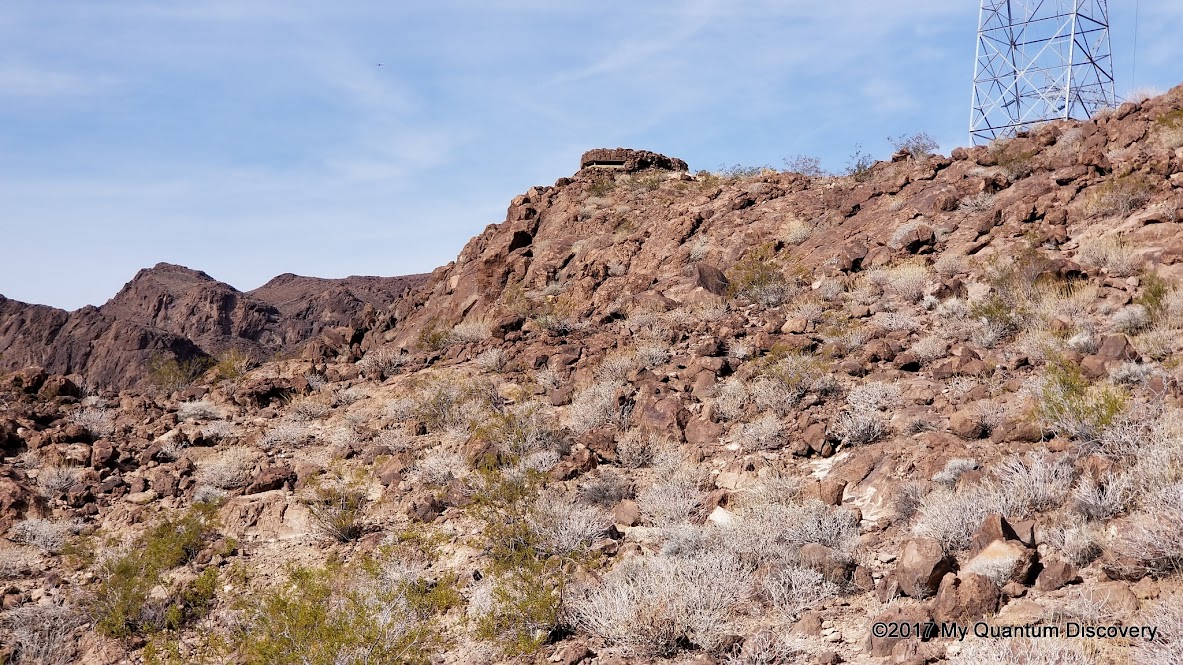 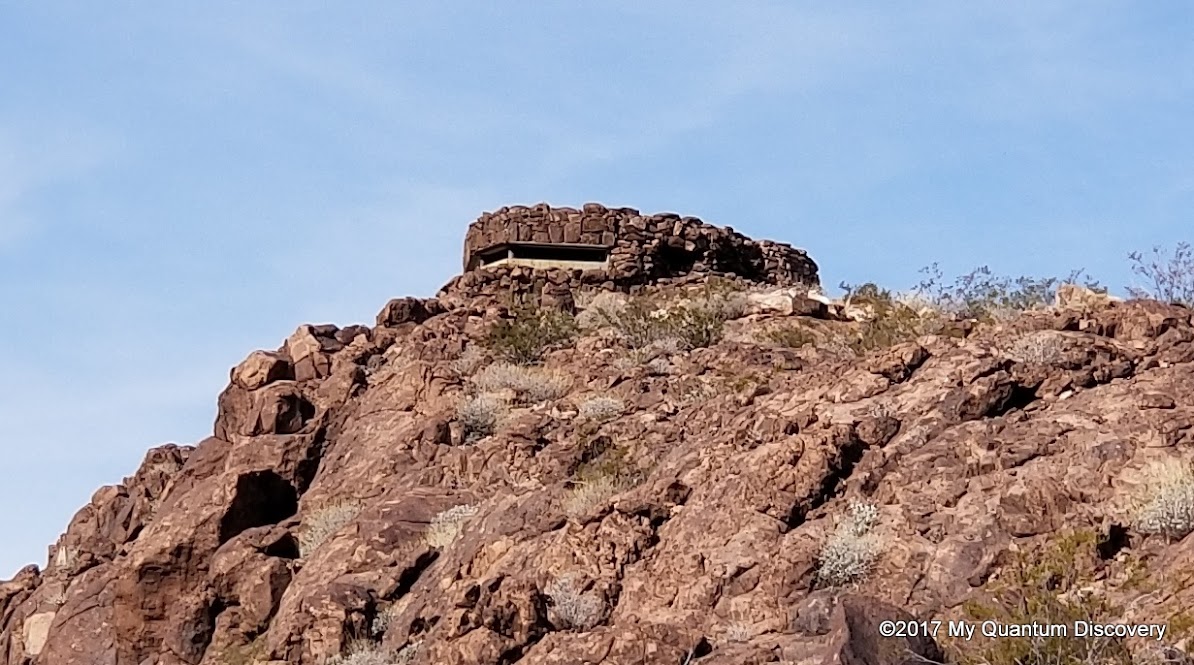 Here we learned that there was a plot in 1939 to bomb the intake towers of Hoover Dam by foreign agents living in Las Vegas. It was fortunately uncovered and prevented.

To protect Hoover Dam and therefore the electricity and water supply, four camouflaged pillbox fortifications were installed and armed with machine guns and manned around the clock during WWII. Three of the four pillboxes were eventually dismantled, but the fourth was stabilized and rehabilitated by the Bureau of Reclamation and the National Park Service in 2012.

Although we had seen all we could see at Hoover Dam, our day wasn’t finished yet. Before returning to Willow Beach for the evening, we had one more stop to make. Stay tuned!