Located about 25 miles northwest of Willow Beach across the border in Nevada is the historical town of Boulder City. Although we visited this slow paced, somewhat eclectic town in 2017, we were looking forward to visiting it again. 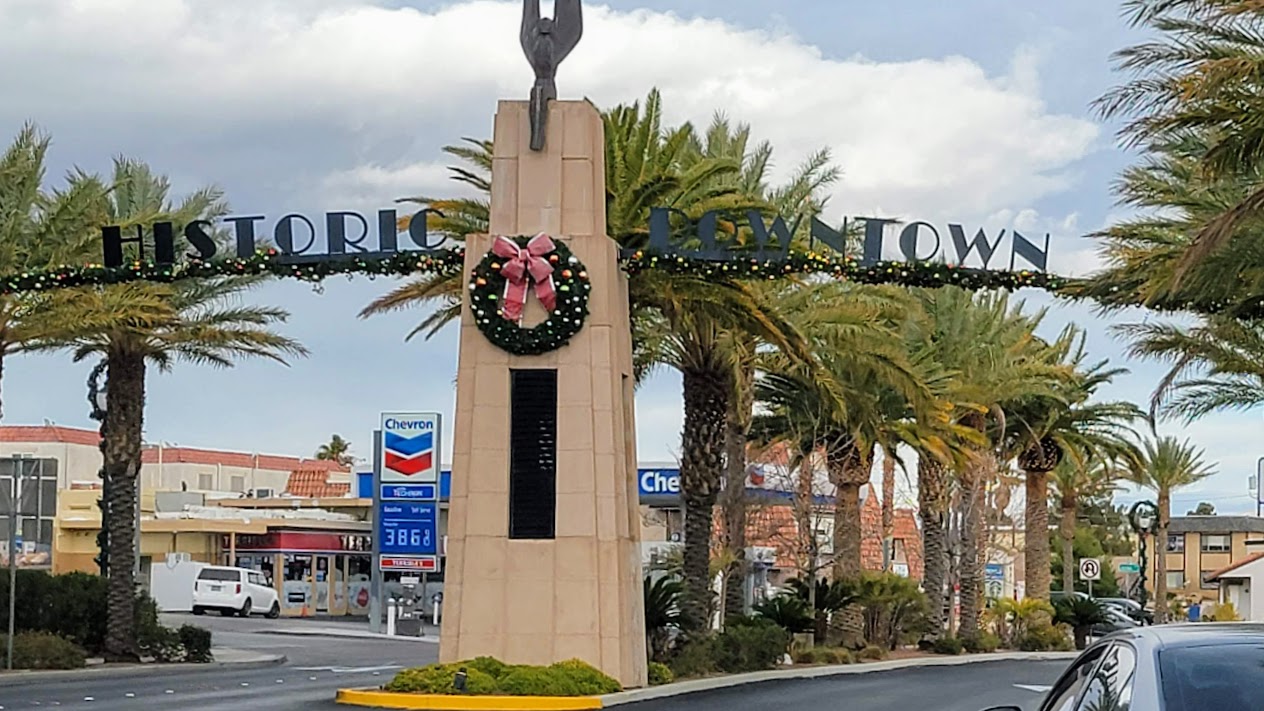 Boulder City was originally built in 1931 by the Bureau of Reclamation and Six Companies, Inc. to be a semi-permanent town with 1500 buildings to house approximately 5000 workers who were building Hoover Dam. Boulder City was carefully planned through federal supervision to be a model community with an emphasis on a clean-living environment for dam workers. Unfortunately Boulder City designers didn’t plan for family life, instead it was the wives of the dam workers who shaped the temporary camp into an enduring community, transforming slapdash houses into pleasant cottages which often served as schools, churches and civic group facilities. In a few short years, though, the town had paved streets, electricity, sewer, water, schools, an air conditioned theater and a state-of-the-art hospital.

Many people thought that Boulder City would become a ghost town after the dam was completed but growth accelerated after WWII because defense industries were flourishing in nearby Henderson and a housing shortage led many to seek homes in Boulder City.

The government did not relinquish control of the city until 1960, when the town was incorporated. Today, the city is one of only two places in Nevada that prohibits gambling, the other being the town of Panaca.

A short distance outside of town is Hemenway Park which boasts a spectacular view of Lake Mead, a playground for kids, a gazebo, benches, basketball courts, horseshoe pits and 2 lighted tennis courts, but that wasn’t the reason for us to stop there on our first visit into town. It was the park’s main claim to fame – the large herd of Bighorn sheep (the state animal) that come down from the nearby mountain to graze the smorgasbord of chow provided by the lush, grassy fields and nearby bushes every day. So cool! 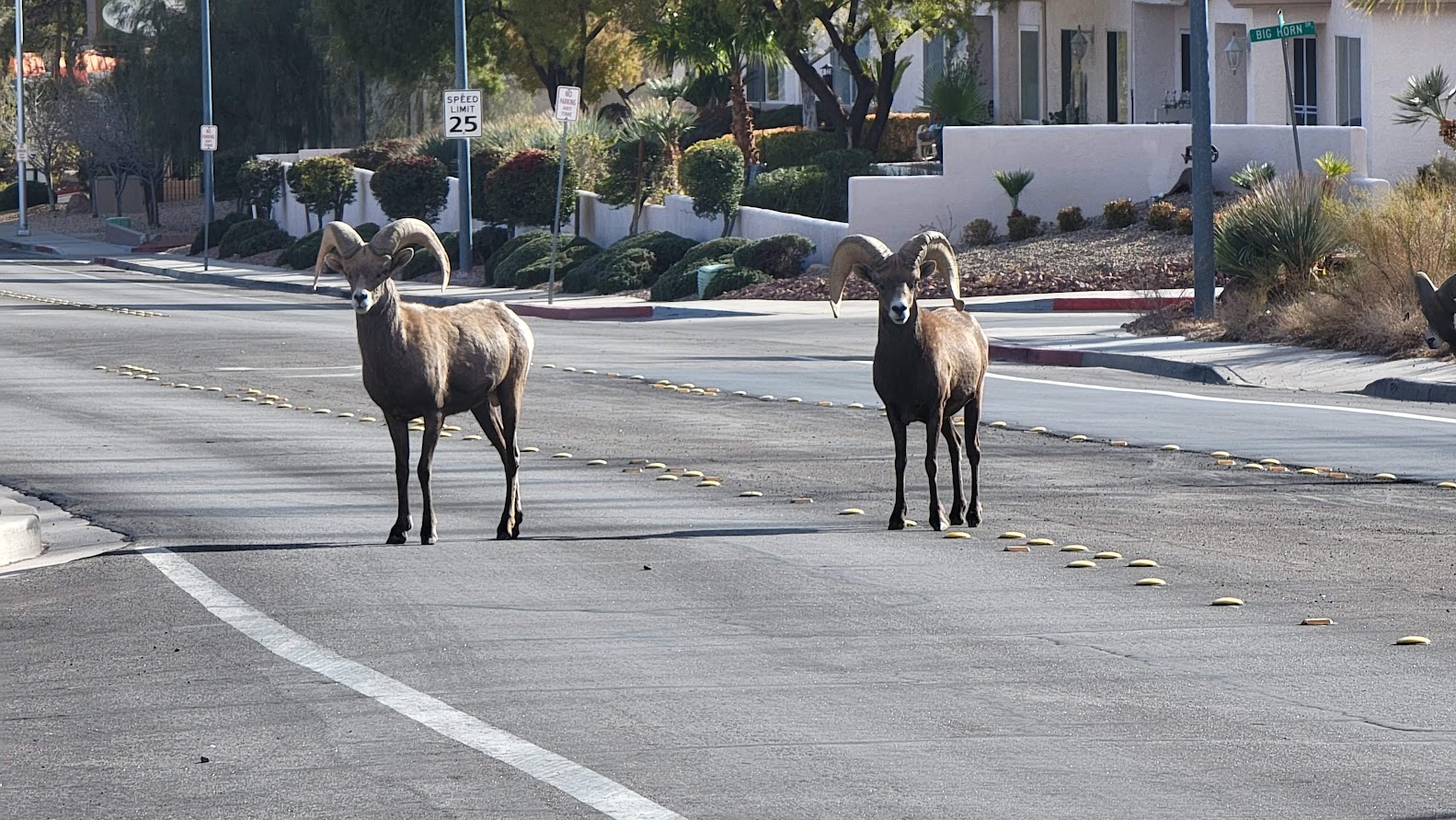 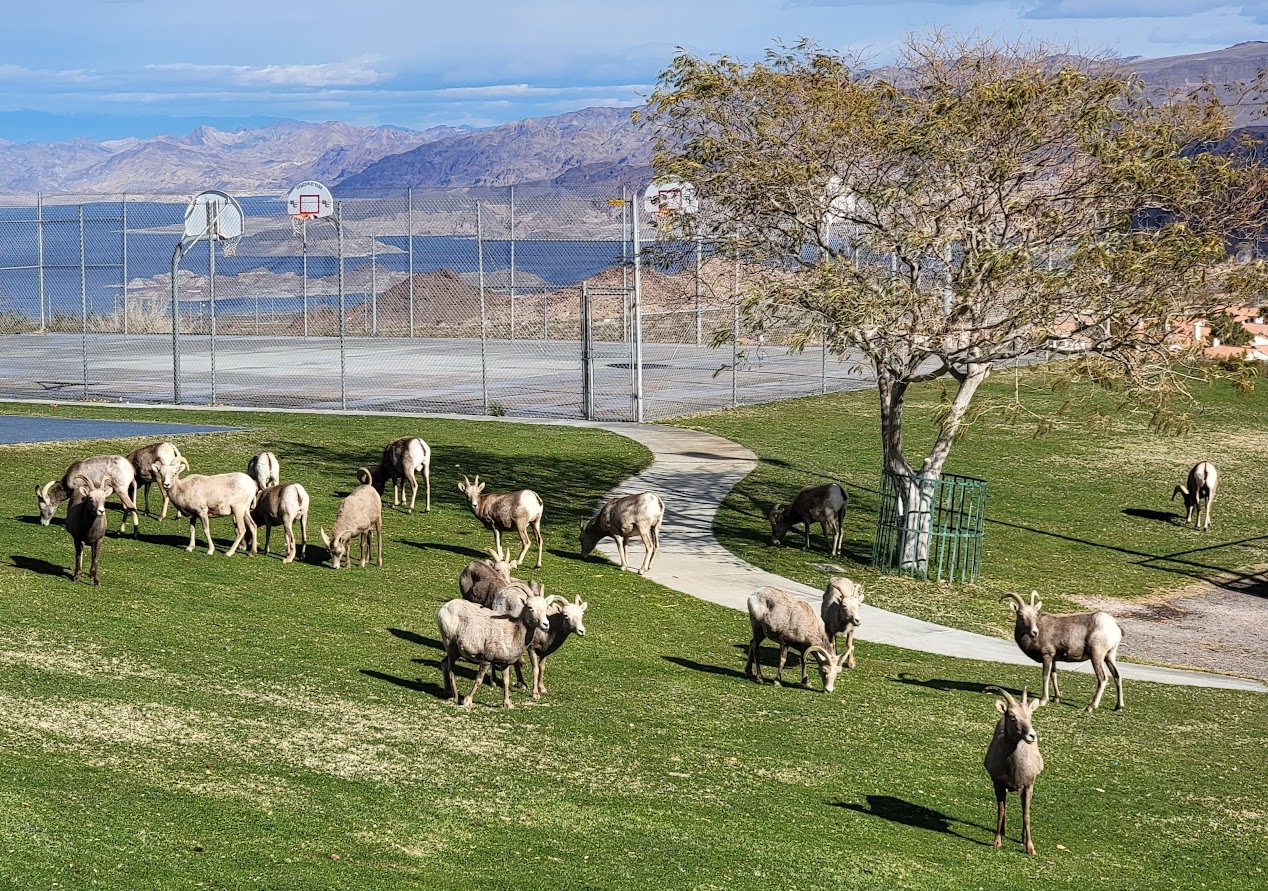 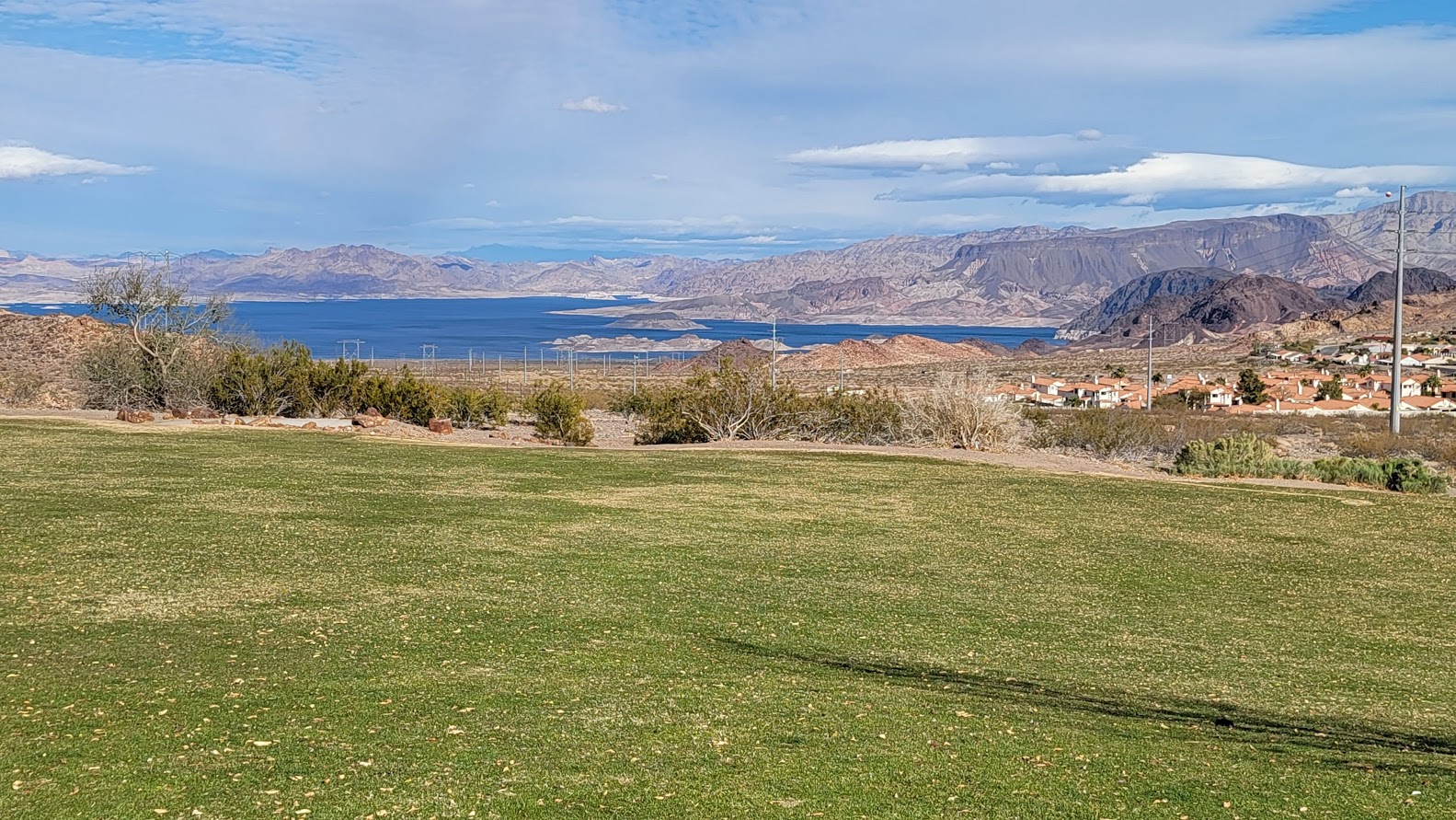 Before wandering the main streets of the downtown area, a stop at the Southwest Diner for breakfast was an absolute must. We had been to this restaurant as well as the Coffee Cup Cafe back in 2017. Both were very good but we craved a repeat serving of the Chile Relleno Breakfast Casserole ($11.75) served with potatoes and homemade banana bread at the Southwest Diner. Mmmm good! Just as yummy as our previous visit! 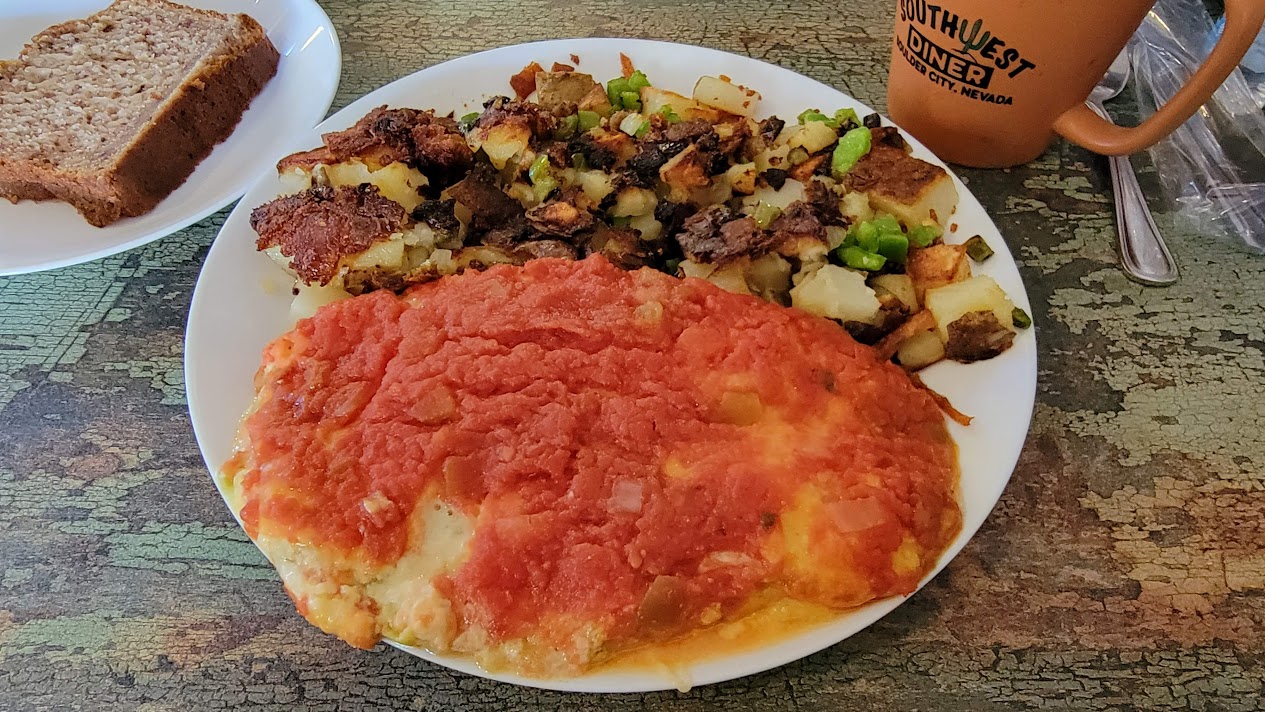 Nestled between a quiet residential area and the historic Bureau of Reclamation building is the 7 acre Bicentennial Park with its beautiful green grass and large mature trees, which makes it an oasis in the middle of the desert. In one corner of the park is a Hoover Dam Turbine Runner. The plaque reads  “This cast steel turbine runner (water wheel), which is 14.2 feet in diameter and weighs over 32 tons, powered the N-7 generator at Hoover Dam Power Plant from 1944 to 1982. The function of the turbine runner is to convert the force of falling water delivered through the pen stock pipes, to rotating energy which is then utilized by the generator in producing hydroelectric energy.” A mix of restaurants, charming boutiques, antique shops, and over 400 historic buildings make this eclectic town a popular tourist destination. An audio walking tour introduces visitors to the history and all there is to see and do while in town. 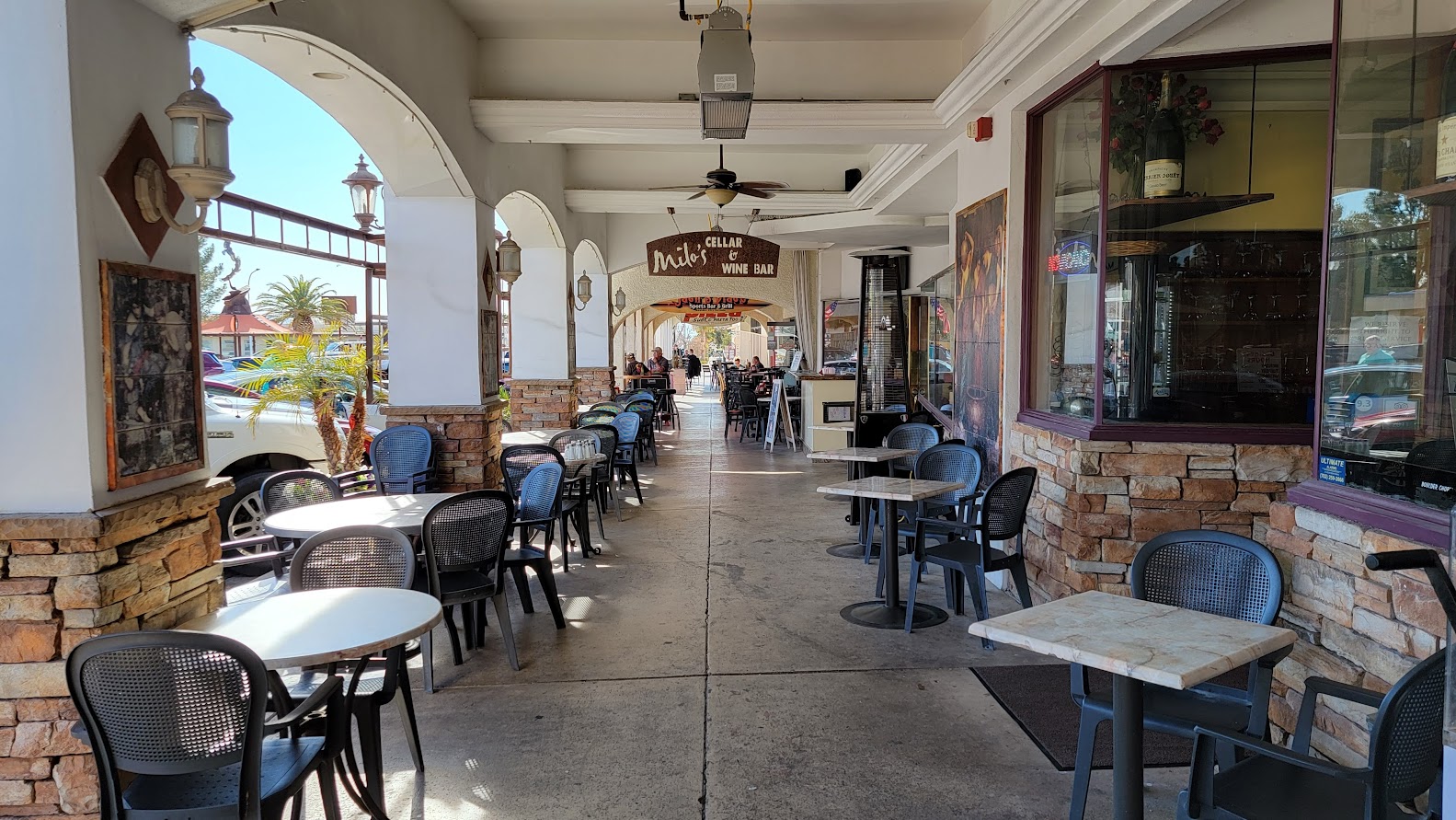 Fun looking at and reading about the assorted pieces of public art dotting the street corners of the downtown area. 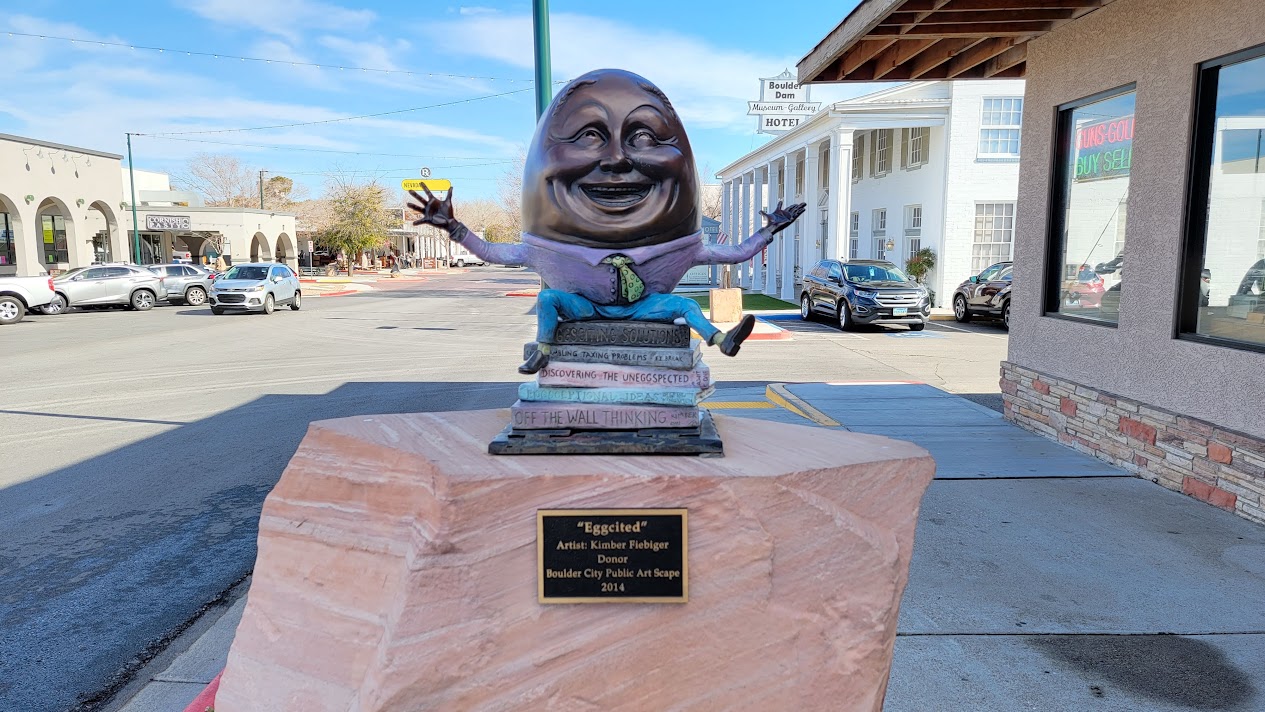 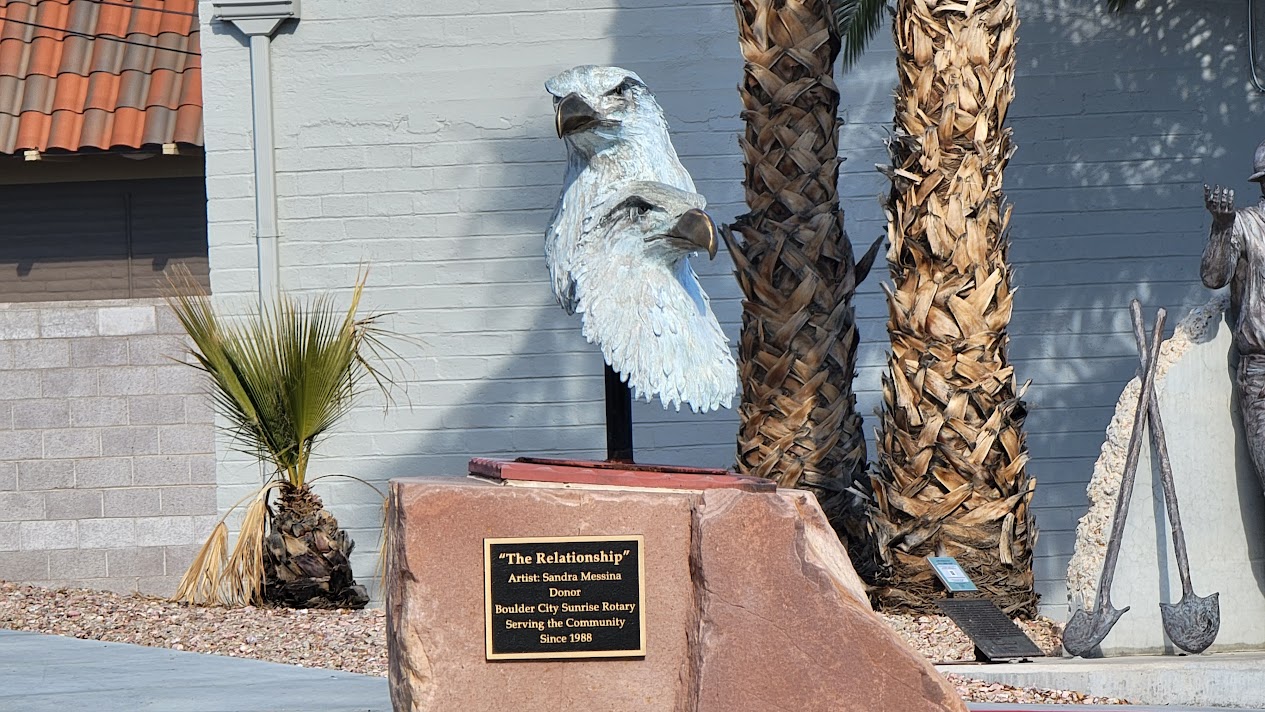 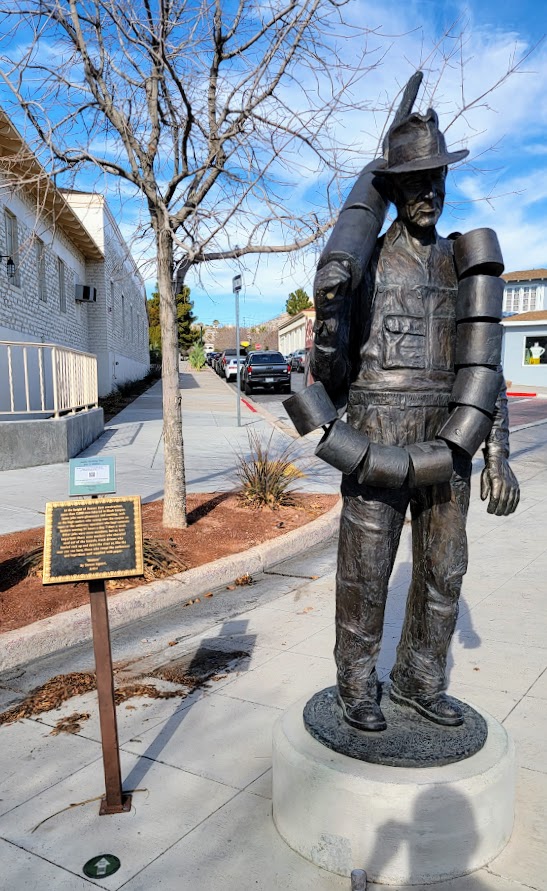 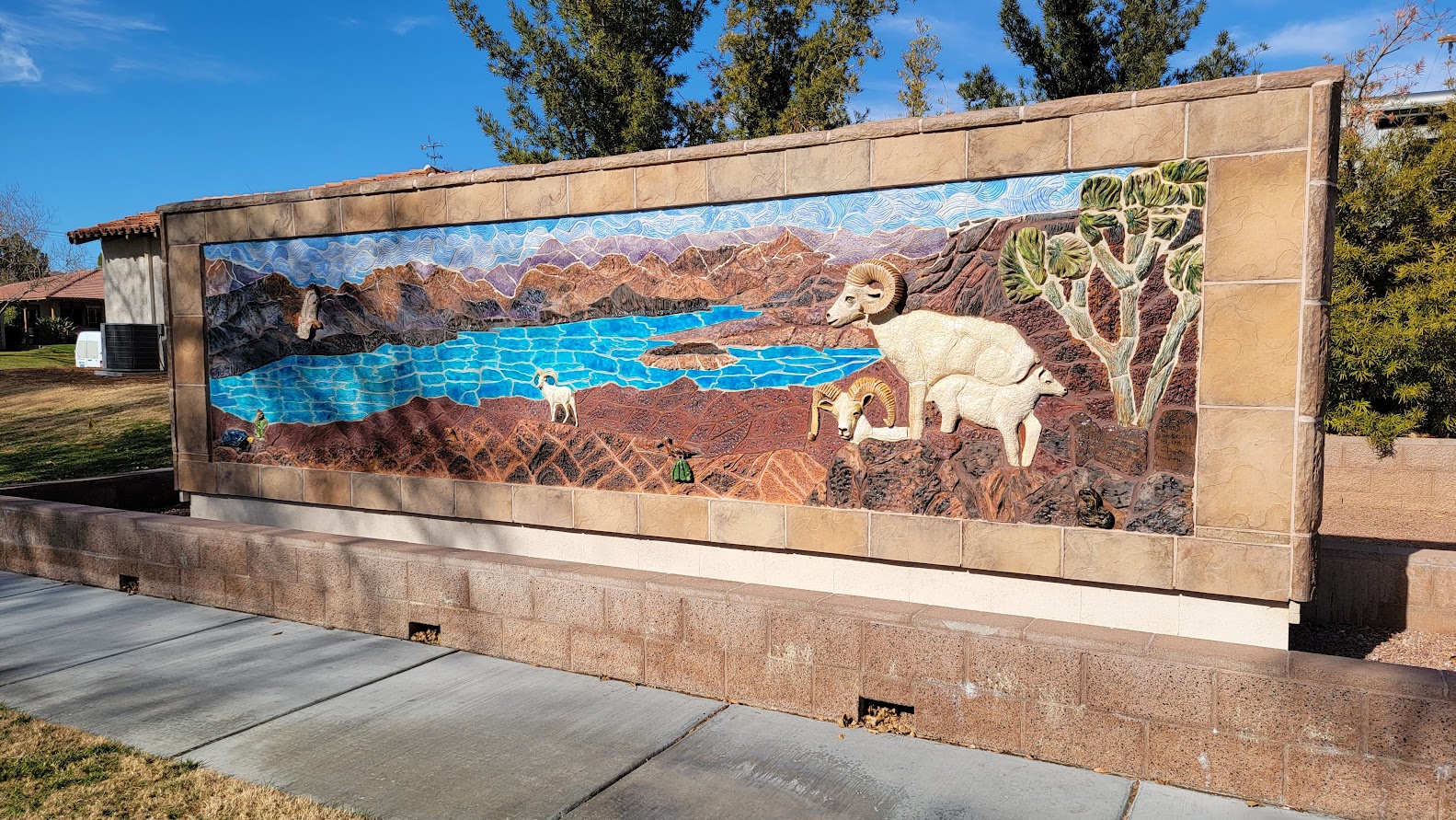 While taking the audio tour, we discovered the Boulder Dam Hotel which was built in 1932 for visiting government mucky-mucks and project managers who arrived to supervise the dam’s construction. Later, it became popular with movie stars who needed to establish Nevada residency so they could obtain a “quickie” divorce. The hotel has an interesting history. 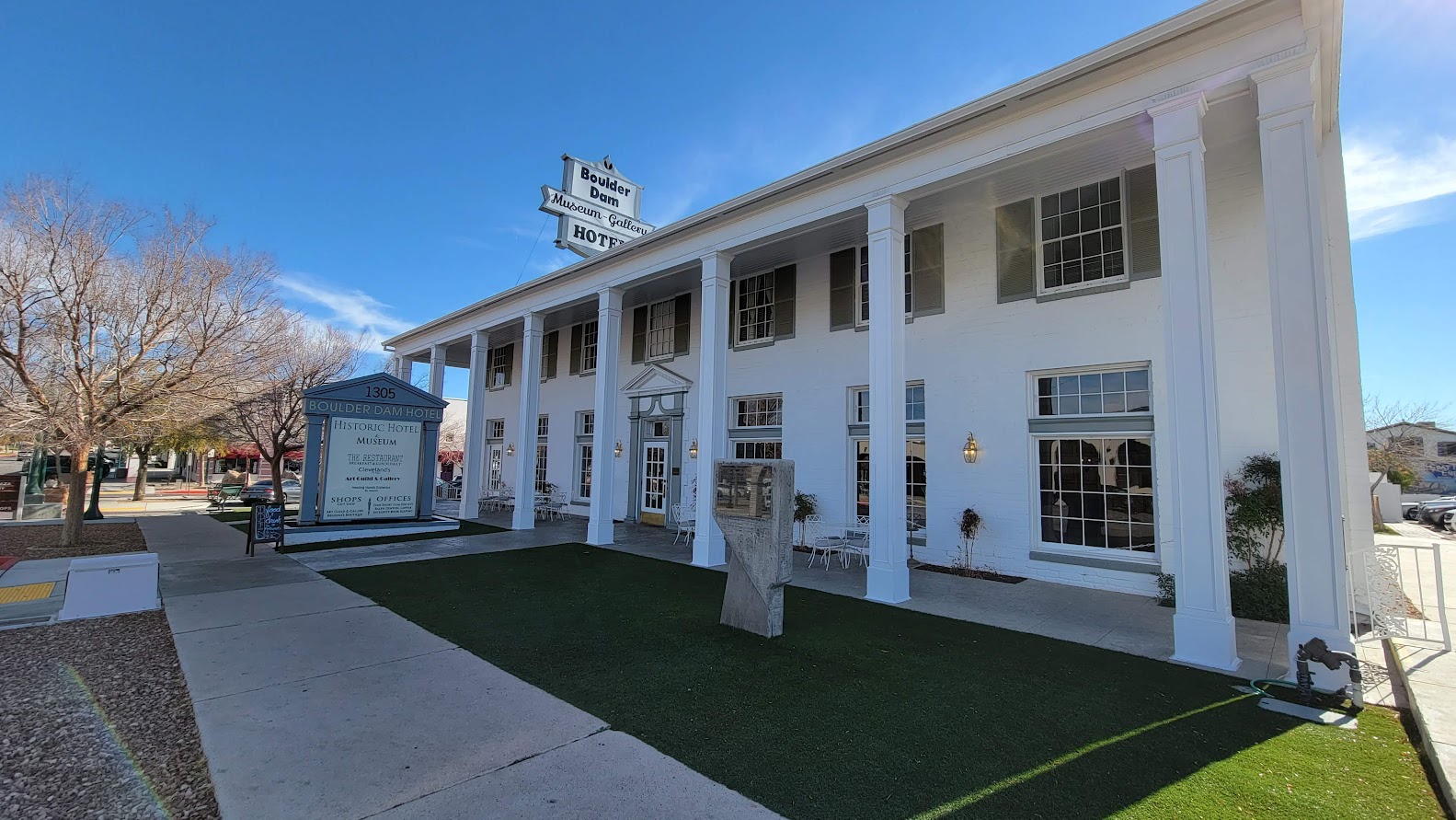 Today, the hotel boasts 21 guest rooms, a restaurant, an art gallery that houses works by local artists, and on the second floor a small museum. Beautiful hotel! We learned that the masonry; the gum wood paneling, fireplace, and chandeliers in the lobby; and the windows throughout the building are original. 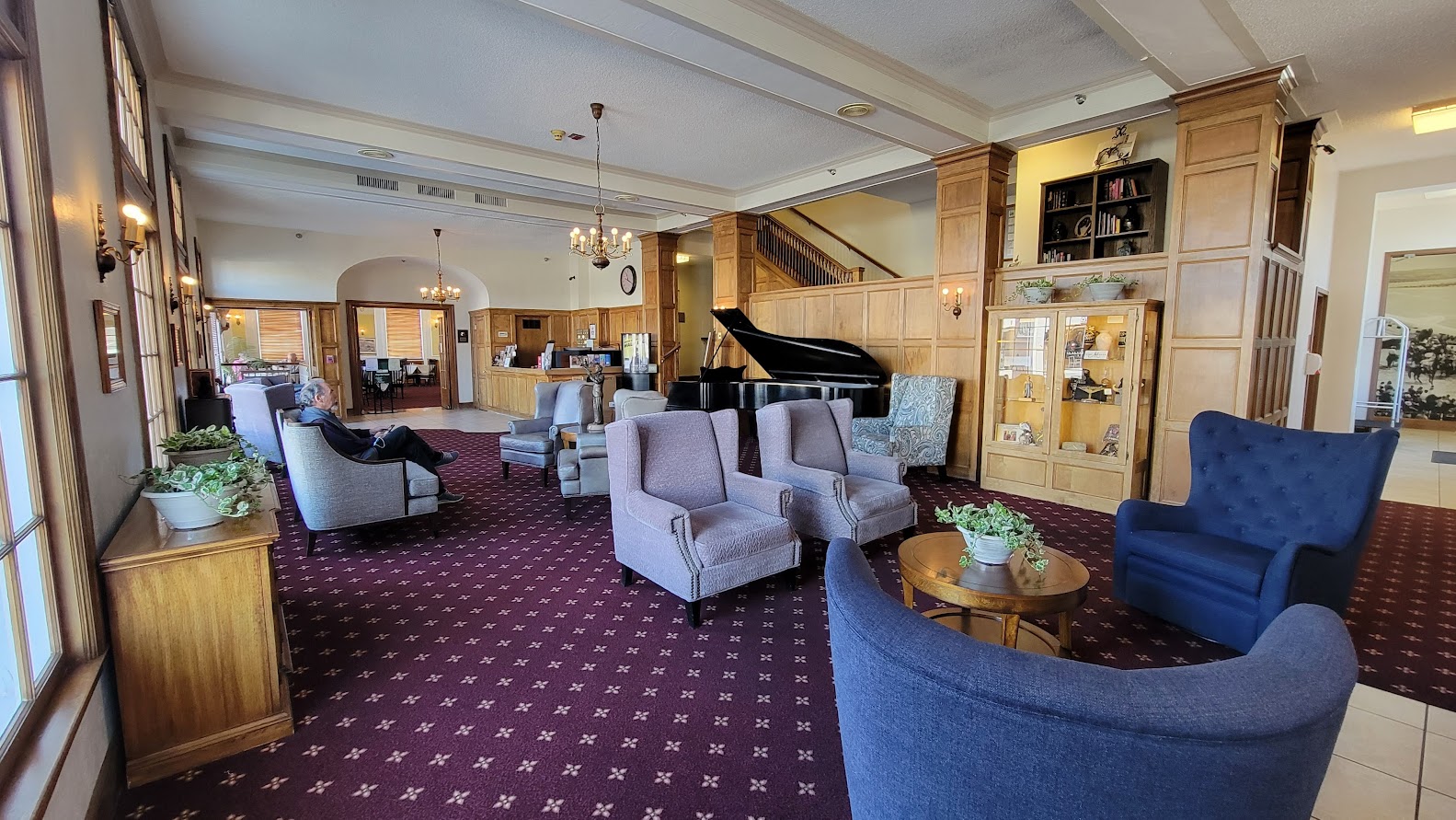 Heading up the stairs to the first floor of the hotel is the museum which is open daily from 7:00 a.m. to 7:00 p.m. Admission is free. According to their website, the museum “tells the story of the men and women who braved the desolation of the southern Nevada desert to build Hoover Dam and settle Boulder City.  Theirs’s is a story of American ambition, vision and grit.  Built during the Great Depression and as the Dust Bowl ravaged the American heartland, the engineering and construction marvel that is Hoover Dam also served as a beacon of hope — signaling a brighter future.” And according to Travel Nevada “through interactive exhibits and authentic artifacts, this fascinating museum (aptly situated in the Boulder Dam Hotel) does not simply tout the building of the dam itself, but also investigates the everyday lives of workers and families and the social forces that brought them there.” 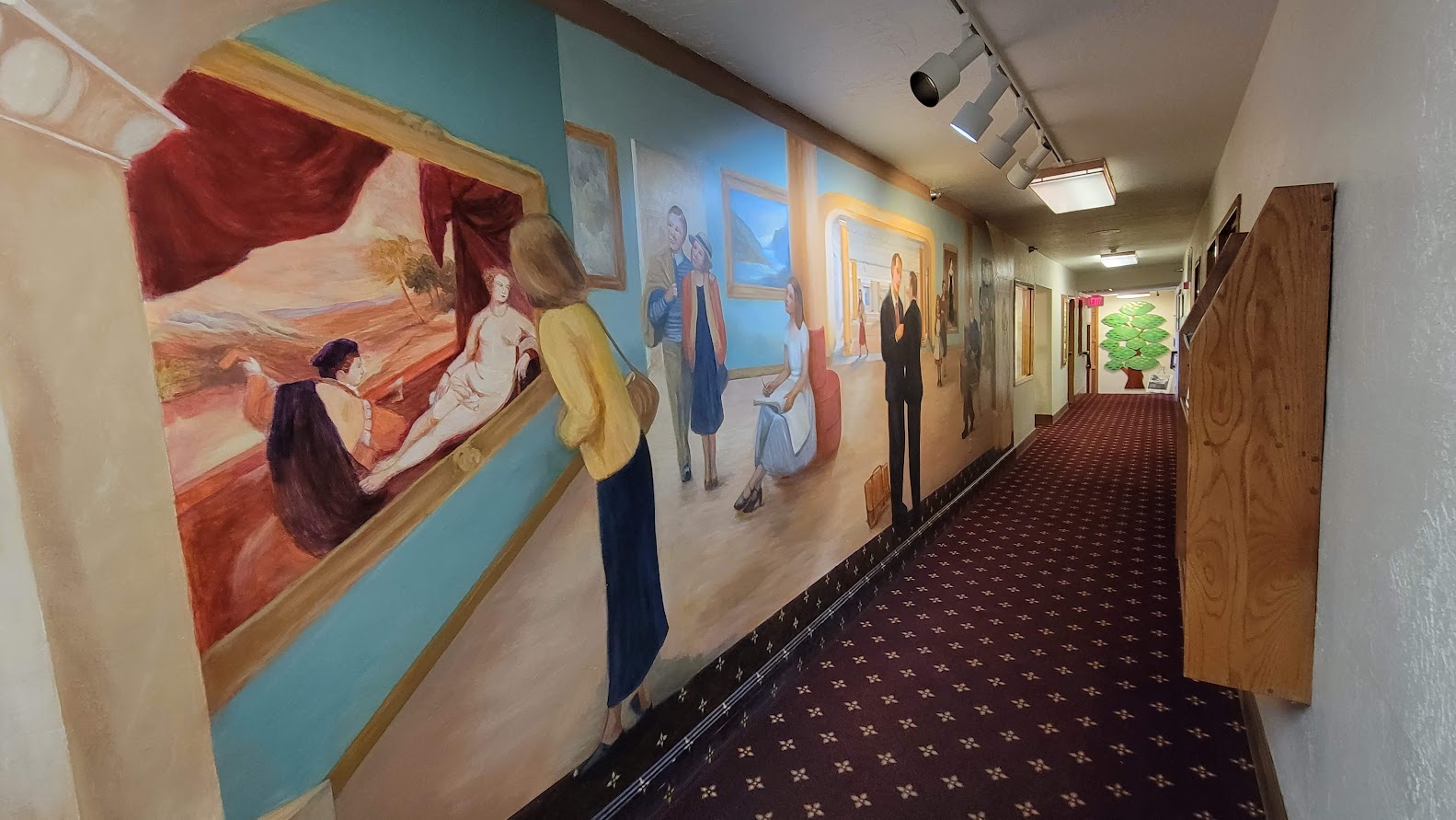 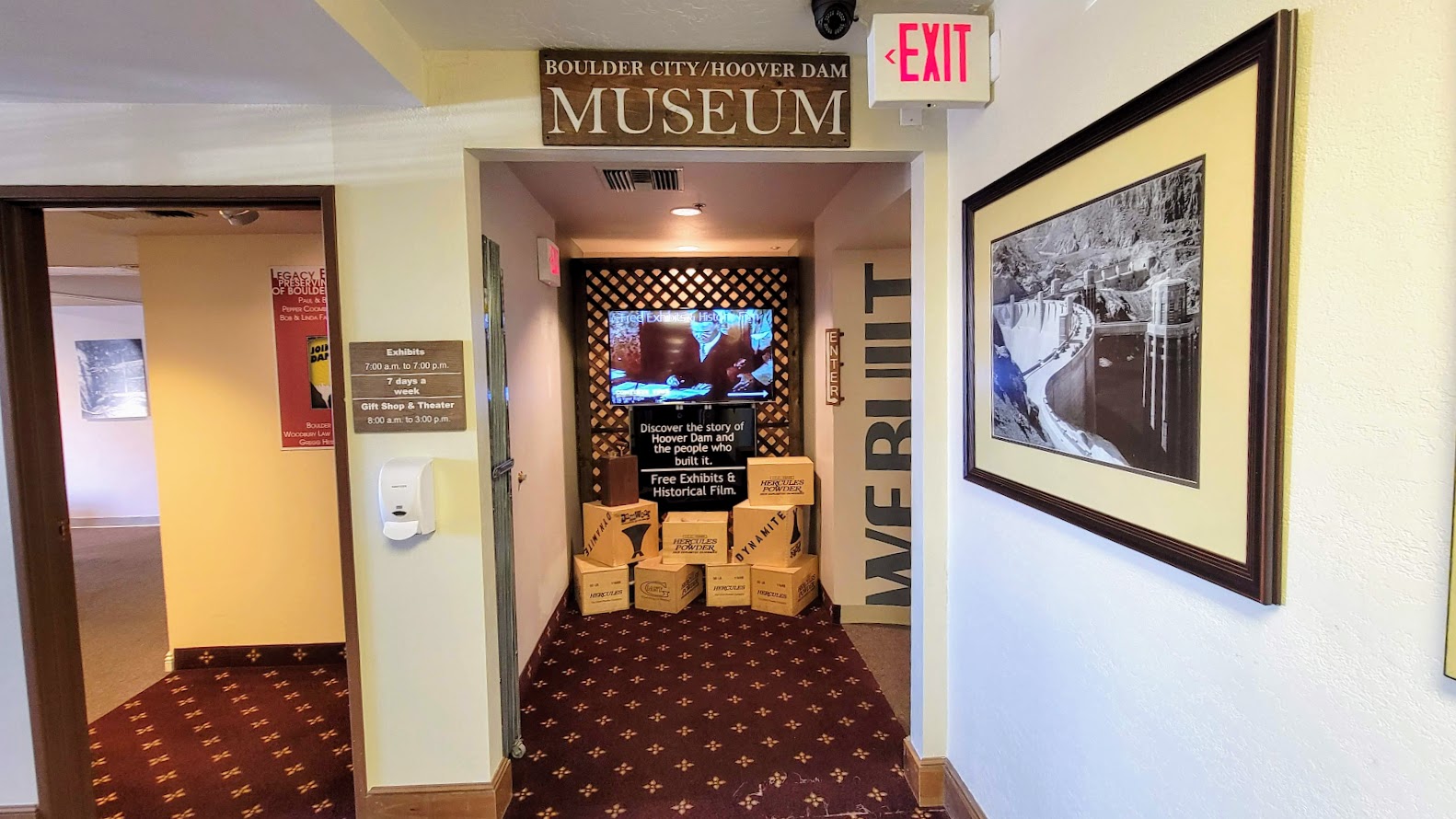 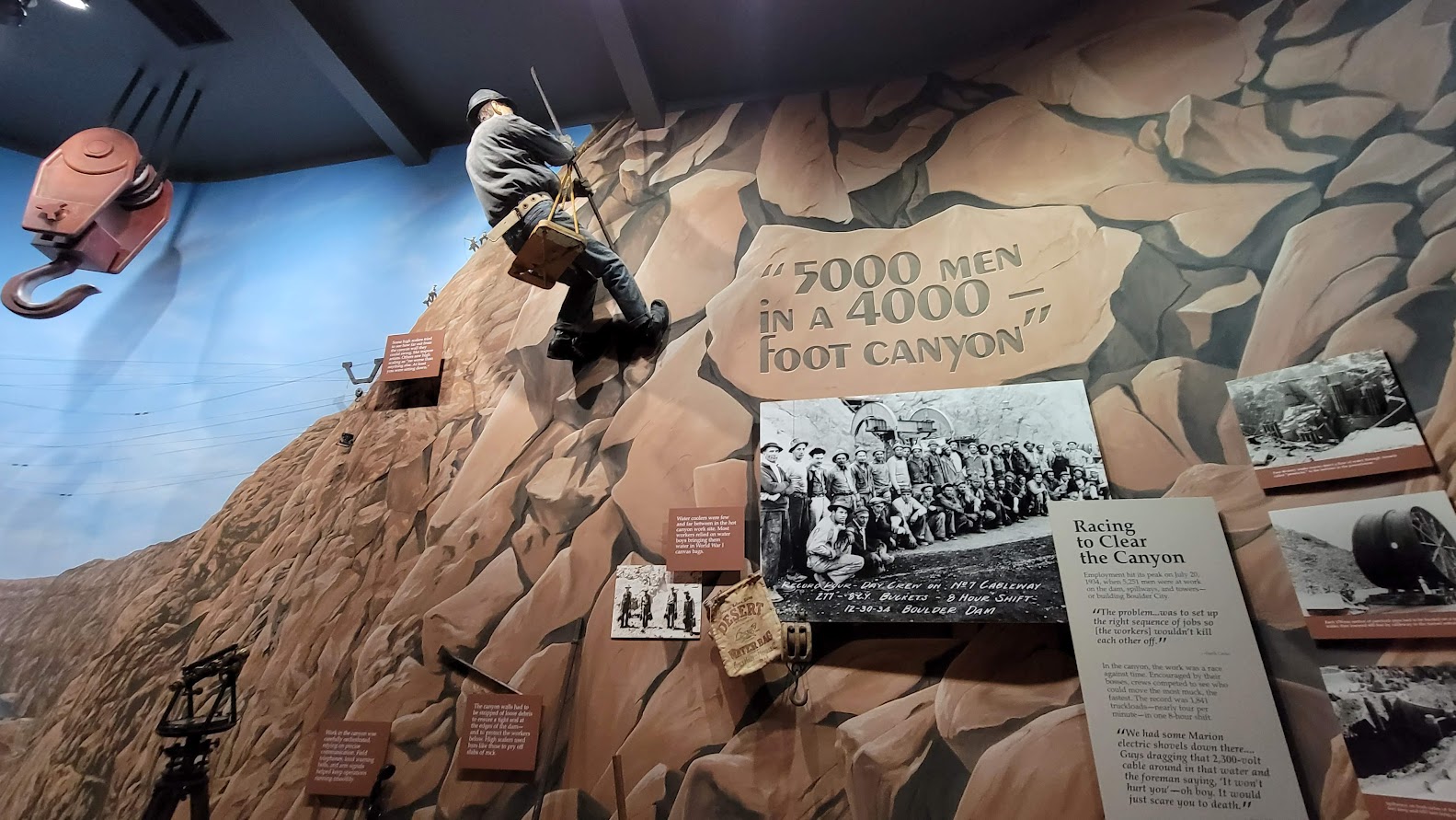 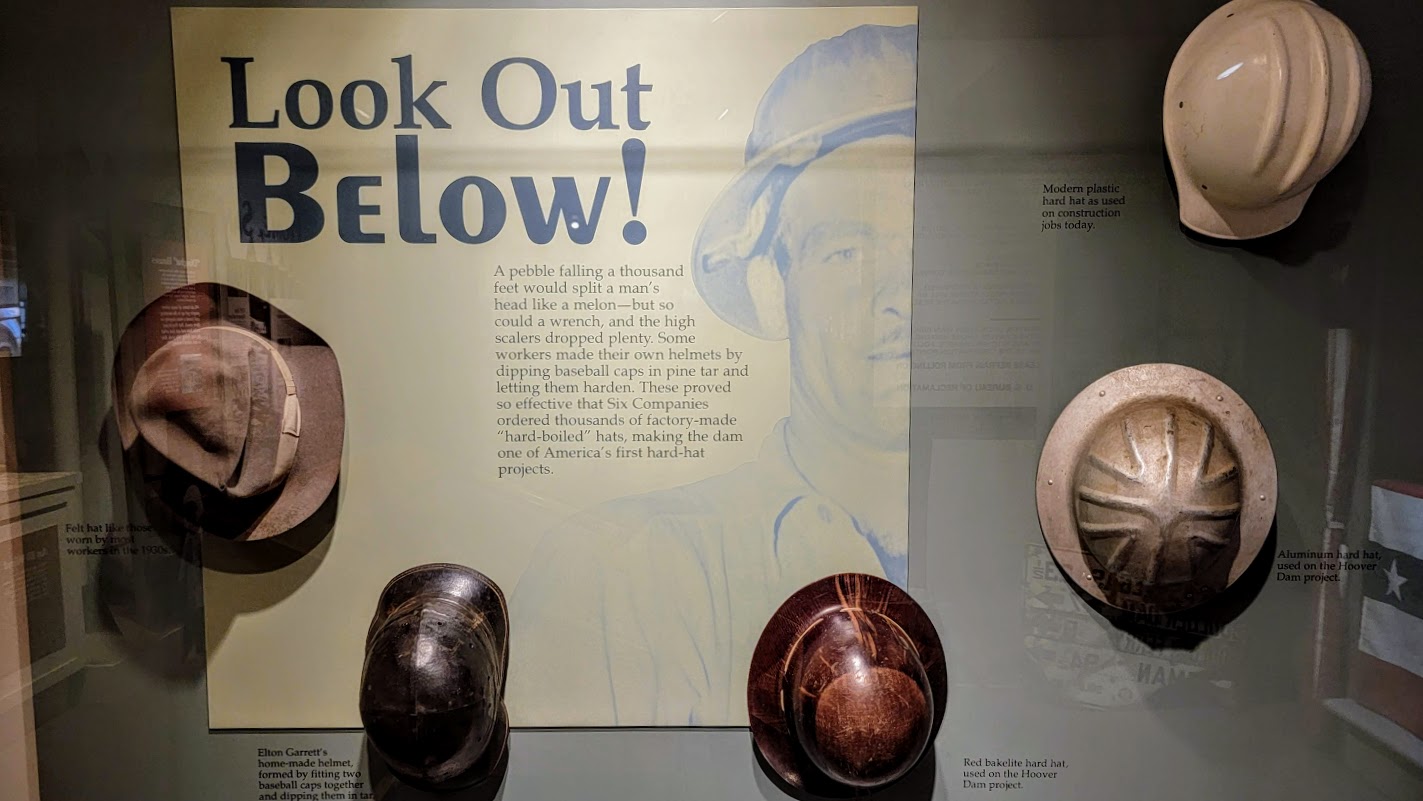 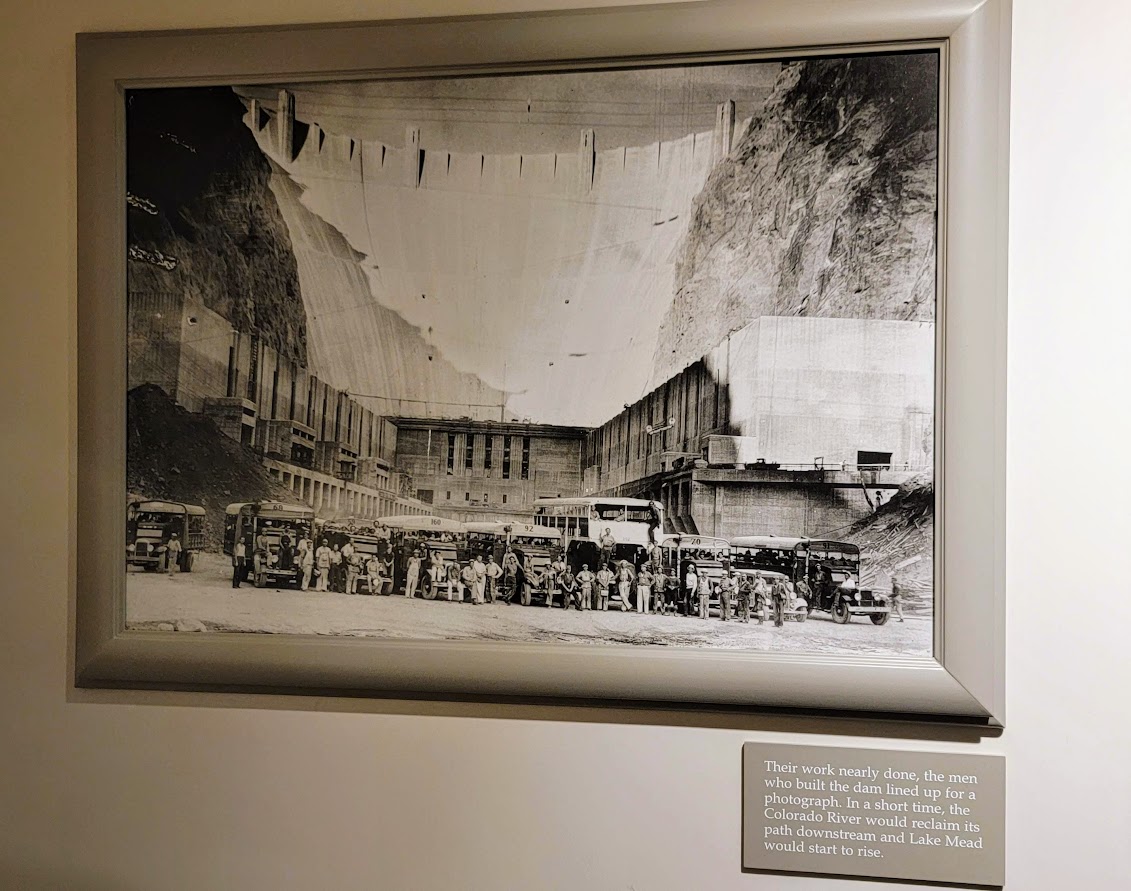 What an awesome museum! And the best part was that it was free! Don’t miss it if you are ever in the area! Actually, we both felt this was a much more relaxed and equally informative way to learn about Hoover Dam, there are also great exhibits at the Hoover Dam visitor center, but it is so crowded there it is difficult to appreciate them.

Additional photos of our visit to Boulder City can be found here. 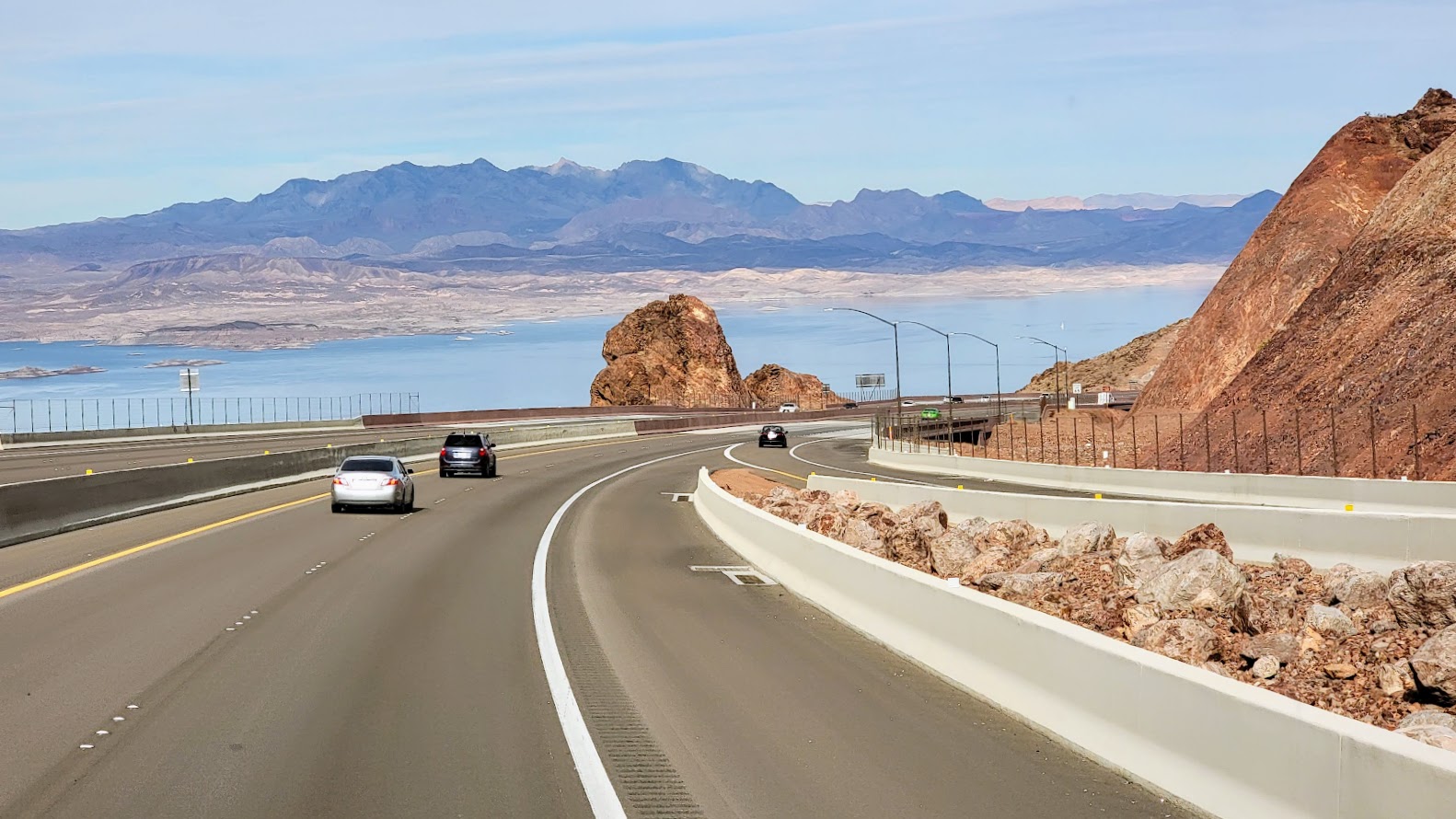