Getting Here: The intersection of State Park Road 2 & Campground Road on the map shown above is the actual campground entrance, ignore any other locations that your GPS wants to take you. If arriving from the eastern shore such as Pensacola we suggest just following the shore roads (AL182) to State Park Rd 2. If arriving from the north on I-10 we strongly advise taking the new Baldwin Beach Express (I-10 exit 49) then the Foley Beach Express – that will avoid all the stop and go traffic on the very commercialized parallel route via AL59. If you stay on the Foley Beach Express all the way to the end there is a Toll Bridge within the last mile, but there is an adjacent free bridge on AL59 that is equally convenient in terms of getting to this campground. We suggest exiting the Foley Beach Express at either CR8 or at Bradford Rd (last exit before toll), then making your way to AL59 and heading south. After crossing the Dr. WC Holmes Bridge on AL59, about a mile further south (just past the Walmart) take a left on HWY180 (Fort Morgan Rd). Bear right at the next intersection onto HWY 135, then shortly thereafter bear left onto State Park Road 2 and follow the signs from there to the campground which will be on your left. If you miss State Park Road 2, (it’s easy to do that) no worries, just continue on to Perdido Beach Blvd (AL182) and take a left. The next left will be State Park Road 2 and the campground entrance. 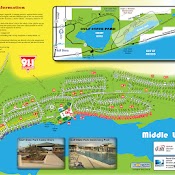 Gulf State Park is very long and relatively narrow, spanning over two miles from the western edge to the eastern edge, with 496 paved sites (a combination of both back in and pull through). Most all sites are full hookup with water, 20/30/50 electrical, sewer, a picnic table and pedestal grill. No fire pits on most sites but fires are allowed with your own fire pit. Relatively new to the park on our 2016 visit are 11 brand new primitive camping sites that 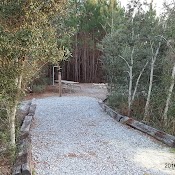 include stone campfire rings, grill tops, and picnic tables. This park also offer 20 modern cabins and 11 cottages all within walking distance of the golf course and a short drive from the beaches.

The campground is not directly on the beach, but beach access is available directly across AL182 (Perdido Beach Blvd.) from the campground entrance and at several other points. The beach is a fairly short walk from the western end of the campground, but can be a pretty long hike from the more eastern sections. 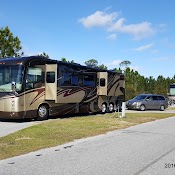 When you are inside the park and just want to relax, it feels like you are miles from all the beach front hubbub but it is actually within a few minutes of everything so there is plenty to do – the beaches, the 15 miles of paved Hugh S. Branyon Backcountry Trails for biking and walking, plus 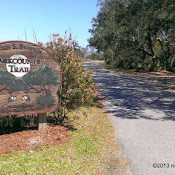 a variety of other attractions. If you’re in the mood for a fun water excursion we recommend the Cold Mil Fleet Dolphin Tours in Orange Beach just a few minutes away from the campground.

Restaurants, grocery and shopping abound and driving north on AL59 toward Foley will offer just about any retail establishment one might desire. Also in Foley are a free railroad museum complete with a fabulous model train display, the Holmes Medical Museum and Stacey’s Rexall Soda Fountain among other interesting attractions.

Further out but within an hour or so of the campground are the Pensacola NAS Museum (which is totally awesome and on some days you can watch the Blue Angels practice), the city of Mobile, the USS Alabama battleship, Weeks Bay Reserve, Fairhope, Fort Morgan, Dauphin Island (via Ferry), Bellingrath Gardens, etc.

Rates:
Daily, weekly and monthly rates can be found here. It’s hard to provide a specific rate as it is dependent on the type of site, the location, whether it is off season or high season, the day of the week, etc. (and sometimes it seems like the phase of the moon and daily temperature might have an impact too!). For example, during our 2016 visit we stayed here for 14 nights and our all inclusive average daily rate came out to $40.34. We don’t know exactly how that breaks down on a day to day basis but it represents our total cost with all fees and taxes included. 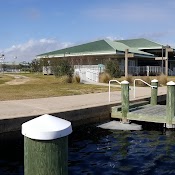 The cost to stay here used to be fairly reasonable at $31 – $34 daily rate. However, we were surprised when we arrived in 2016 to learn that there had been two recent rate increases. Adding insult to injury, in addition to the rate increase they have added a resort fee of either $7 daily, $35 weekly or $90 monthly which according to the website “will cover the cost to maintain the almost 6,000 acres of Gulf State Park including well-manicured greenspaces, common areas and trails; 3.5 miles of clean, safe and pristine sugar-sand beaches; dedicated public safety and security; play areas and playgrounds; three public fresh-water lakes, our nature center and programs, and FREE sight-seeing access; as well as a $3 discount off pier fishing access.” Then there is the 11% lodging tax and a one time $4 transaction fee charged at the time of the reservation! Ouch! 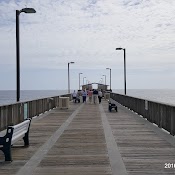 When we have tried to make reservations in prior years, it has been very difficult to reserve a site at this park between Dec and Mar, but our guess is that with the rate increase and the additional resort fee, it has become too expensive to stay here long term so many of the snowbird regulars have moved to other campgrounds. I should have known something was up when I called in Dec 2015 and sites were available in Feb 2016. While there appeared to be a number of empty sites during our stay, the staff claimed they were totally booked.

Also note that in the past, you couldn’t reserve a specific site but you could request a site in a particular area or on a particular road. That policy has allegedly changed – you can now request a specific site (note the website does not reflect that but that is what we were told by the office). Online reservations are only possible May – Oct, so during peak season you must call. Gulf State Park does allow monthly stays between November and March but the rest of the year the stays are limited to 14 days (at least officially). In past years we knew of campers staying for the entire season.

Note: Normally there is an entry fee for non-campers to enter the campground. If you wish to have visitors to your site, we were told by the staff that your guests should say they are staying with you on your site – they will be given free entry and a vehicle pass. We did that twice and it worked as advertised for our guests. The vehicle pass also provides free access to the beach pavilion lot. 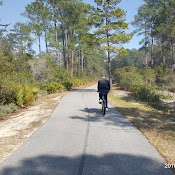 We’ve always liked this State Park not only because of the fairly large sites but because it is close to so many good restaurants, great biking trails, nature trails and of course, the beautiful beaches. The only thing we didn’t like this year was the dual increase in the rates and the $7/day resort fee. A couple of dollars would have been more palatable, but $7/day? And for that price you would think that we wouldn’t have found cigarette butts on the ground at our site! The only thing that fee saved us was a $3pp fee to walk out on the fishing pier. Due to the cost, we are not sure if we will be returning in the future.

Sites
There are 48 back-in sites with water frontage on Middle Lake and another 14 pull thru sites directly on the boat canal. On most of those you can probably launch a canoe or kayak directly from your site. The rest have views of woodland, marsh or other campsites. See the full campground map here. If you want to be within the shortest walking distance of the beach stay at the far west end, if you want to be closest to the walking/biking trail network stay at the far east end.

Size – 4/5
Both the back in and pull thru sites for the most part are fairly large with asphalt pads. The pull thru sites are all “loop” style parallel to the road (hookups are closest to the road). We’ve stayed on both a pull thru site and a back in site, all long enough for both the rig and our vehicle.

Privacy – 3/5
There’s no vegetation between the majority of the sites so there is not much in the way of privacy. However, there is ample room in most cases between the sites so you don’t feel like you are on top of your neighbor. 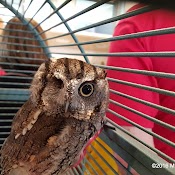 For a state park, this campground has a lot of amenities beyond the full hook ups. A comprehensive Nature Center staffed by very friendly and knowledgeable rangers and volunteers, a swimming pool (not open during our stay), 11 bathhouses, 2 playgrounds, laundry facilities, store, a boat ramp, Segway tours, Refuge Golf Course and Grill, outside amphitheater and lots of activities. 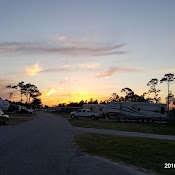 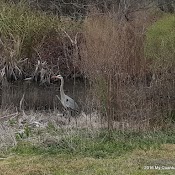 heavily wooded as it once was, but despite that it still has that close to nature feel to it. We had several birds including a Great Blue Heron visiting our site along with other critters. According to the State Park website they have removed a number of invasive Chinese Tallow Trees (the seeds came in with a hurricane in 2004) and have been reforesting with new trees such as longleaf pines. 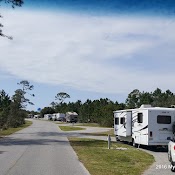 into the campsites is easy in most cases due to the appropriate angling of the driveway. The “loop” style pull thru’s are not our favorite, but here most are plenty big for even the longest rigs.

Peace & Quiet – 4/5
Considering how huge this campground is, it was surprisingly quiet during our stays particularly our latest one in 2016, perhaps because it was off season or perhaps because of the chillier temps, or perhaps because of our location at the far eastern end. No traffic noise to speak of, no trains, just an occasional aircraft and the crashing of the surf on the beach. Most of our neighbors were snow birds and respectful. There was a steady stream of bikers and hikers heading to/from the trails on any given hour of the day. 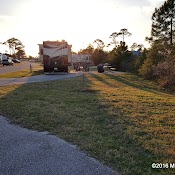 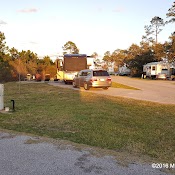 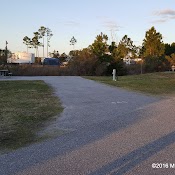 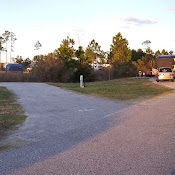 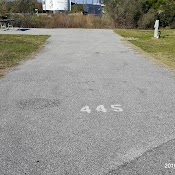 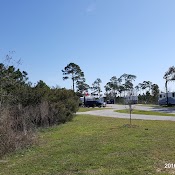 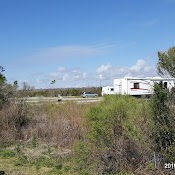 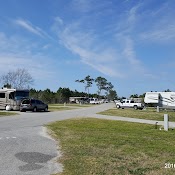 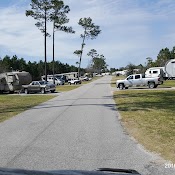 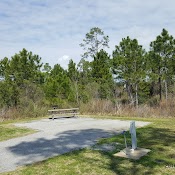 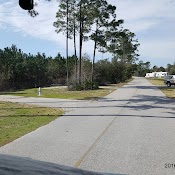 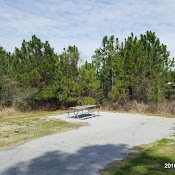 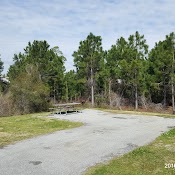 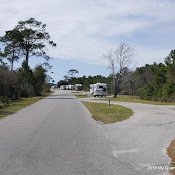 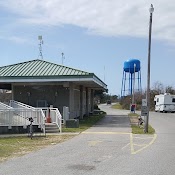