Where can you find a place with a rich history, old world charm, cobblestone streets, quaint cafes and bars, unique shops, all next to the tranquil natural settings of the beautiful North Florida coastal area? St. Augustine of course!

What’s not to love about this wonderful city? Founded in 1565 by Spanish explorers, it claims to be the oldest continuously inhabited European-established settlement within the borders of the continental United States. It’s a destination that attracts thousands of visitors every year. Everyone should visit here at least once.

Since 2005, we have traveled to this beautiful city, on numerous excursions either by car or by RV so we have visited many of the attractions prior to this year’s stopover. But sightseeing wasn’t always the primary reason for a visit here as was the case after we became full-timers in 2013 when we needed to establish our Florida residency. More recent visits included a one day stopover in 2014 and 2018 when we explored the St. Augustine Lighthouse, toured the St. Augustine Distillery and had a delicious dinner at our favorite St. Augustine restaurant, The Raintree. Would there be more sightseeing during this visit? Perhaps. Whatever we did, we had to incorporate a repeat visit to the Clay County DMV into our plans during our three night stay at Stage Coach RV Park. Both our 2013 Odyssey and our Entegra registrations were due for renewal. Yes, we could have done this on-line but since Rob has dissolved his Volt Doctor business, it was time to retire the VoltDoc license plate on the van. We thought it would be easier to do this in person. 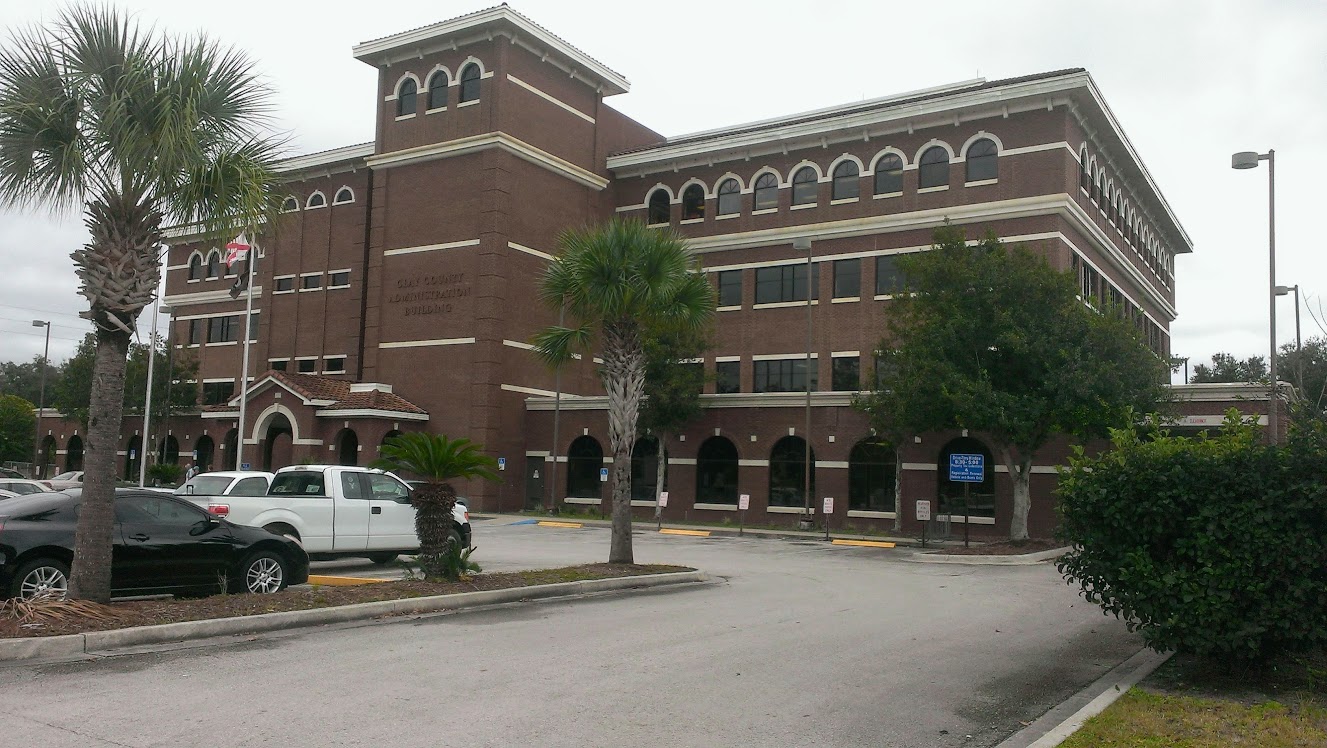 Back in 2013, we were astonished at how quick and painless (except for the usual fees) our visit to the DMV was. Very unlike our visits to DMV offices in MA, where there was always a long line resulting in waits of an hour or more.  In less than an hour, we had new FL licenses, new registrations, new license plates and our voter registrations in hand. Would it be as fast this time we wondered? To ensure that we had adequate time to do some fun stuff during our short stay, upon arrival and as soon as we settled in at Stage Coach, we headed over to Green Cove Springs to take care of business. We entered the building, told the receptionist why we were there and before we even had a chance to sit down, were directed to one of the clerk windows. Twenty minutes later, we were done! Wow! Very impressive.

After a delicious breakfast of Eggs Benedict and Corned Beef Hash (wonder who ordered that) at the Metro Diner the next morning, 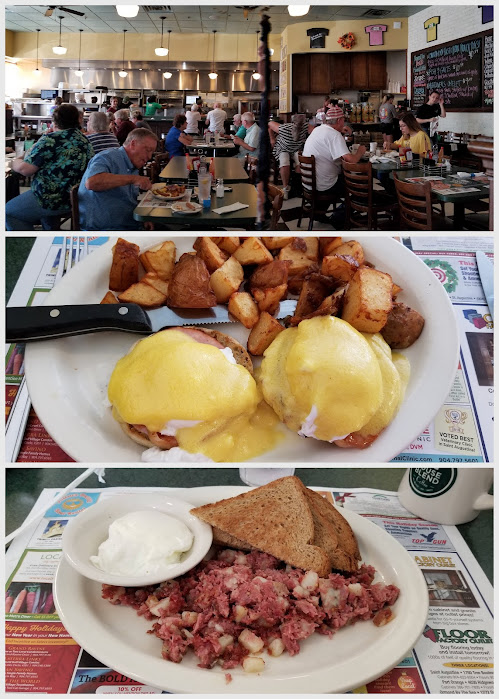 we headed over to the Castillo de San Marco National Monument. 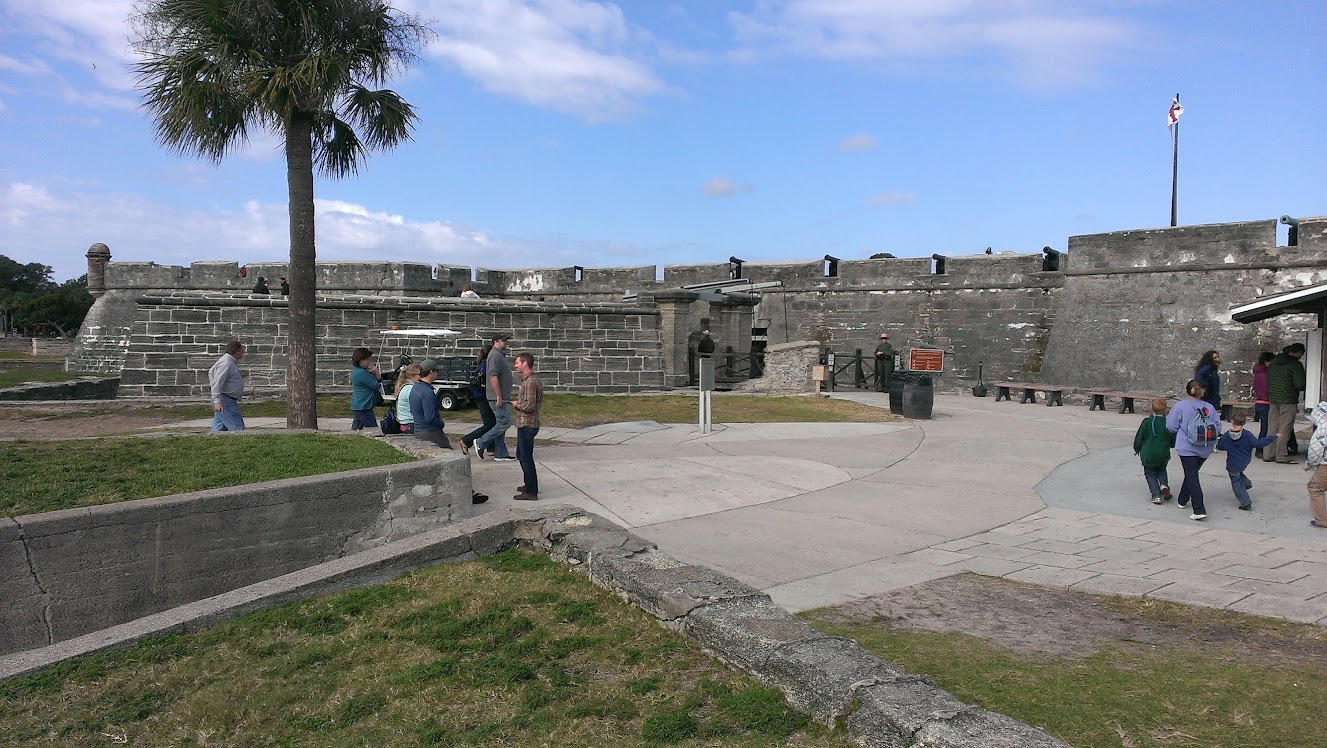 Open every day except Thanksgiving and Christmas from 9:00 a.m. to 5:00 p.m., the admission fee (for 7 consecutive days) is $15 for adults (age 16 and above), children (under the age of 16) are free. If it’s a busy time of year, rather than stand in line to buy your tickets, purchase a digital pass on-line here.  Anyone with a Golden Access and Age Passport; the Castillo Annual Pass; and the Interagency Access, Annual, Military, and Senior Passes are honored with free admission in accordance with the terms specified on the card. Since we have the lifetime Senior pass, admission was free for us.

Parking is provided at the Castillo de San Marcos parking lot right in front of the fort. Best to arrive there early as the parking lot fills up quickly especially on weekends. The cost is $2.50 per hour which can be paid at automated stations which accept most denominations of U.S. coin and currency as well as credit and debit cards. Or you can download the ParkStAug app on IOS and Android and set up your account by adding your payment method (credit or debit card) and your license plate number. You can also set up your account online at ParkStAug.com. Easy peasy parking! 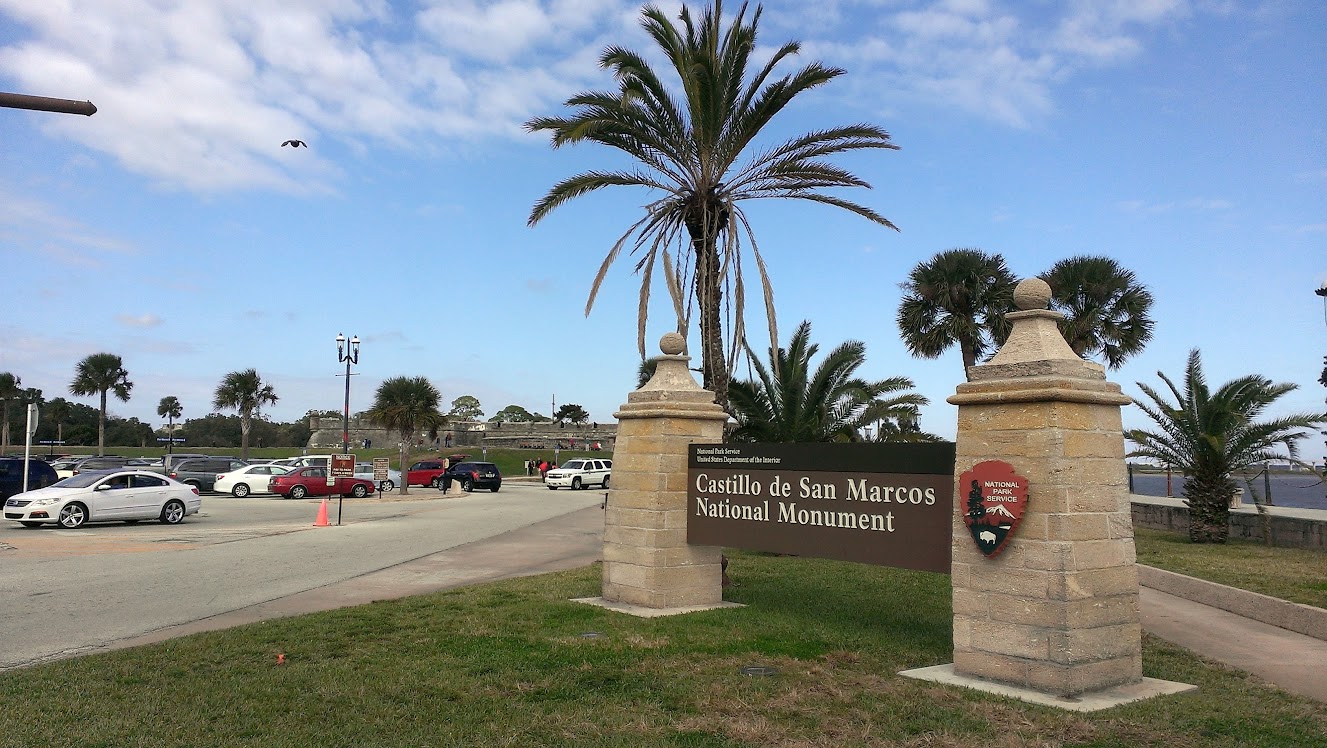 Built between 1672 and 1695 by the Spaniards, it is the oldest and largest masonry star fort in the continental United States. Not sure what a star fort looks like? This document shows an exploded birds eye view of the fort as well as a brief history. If you are interested in seeing more, the National Park Service offers a number of videos which are quite interesting. 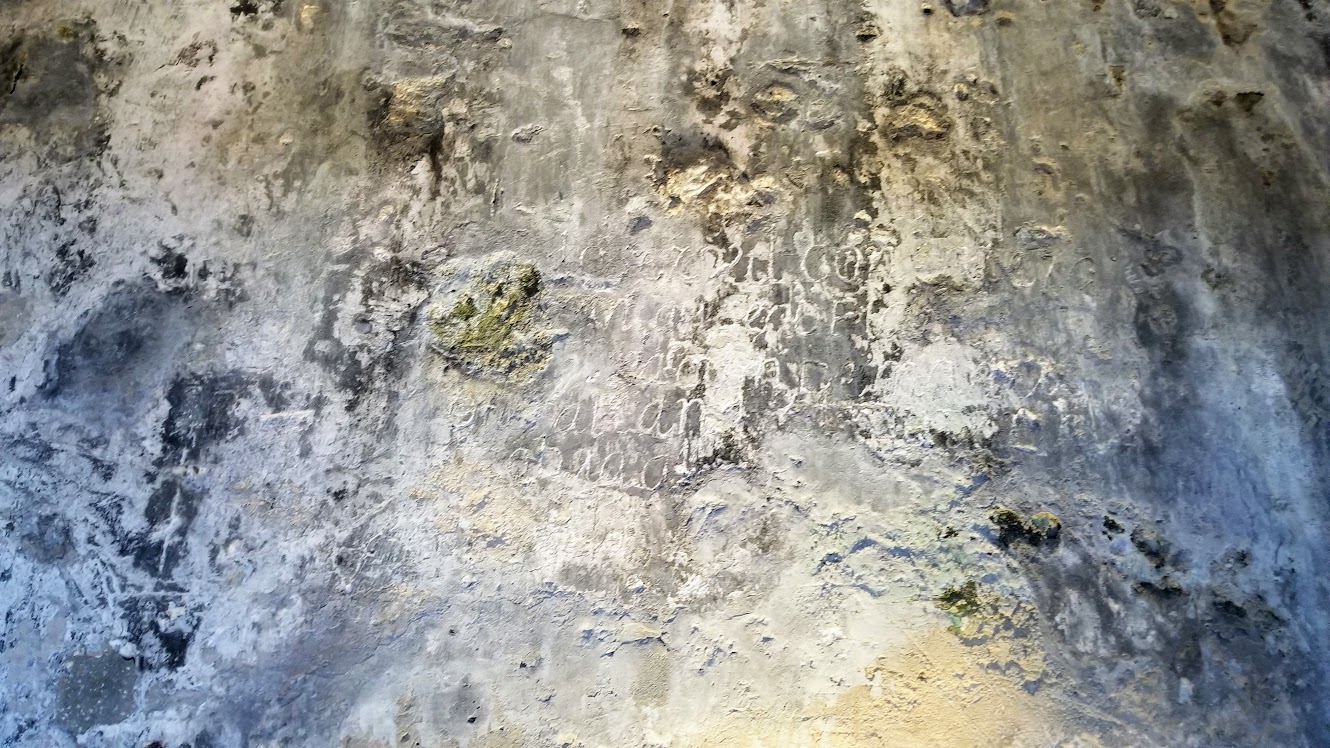 Made of a stone called coquina (Spanish for “small shells”), which consists of ancient shells that have bonded together to form a sedimentary rock similar to limestone, it was incredible learning that the walls are 33 feet high and 12 feet thick and surrounded by a 0moat (now dry). There are over 400,000 blocks of stone in the Castillo, all of it cut and set by hand. No wonder it took 23 years to construct!

Despite being under siege by the British multiple times, the walls of this fort amazingly were never broken. The reason – coquina’s tiny shell particles are fluid and have the ability to reshuffle, acting more like foam than stone – cannonballs were “swallowed” instead of splintering the walls. 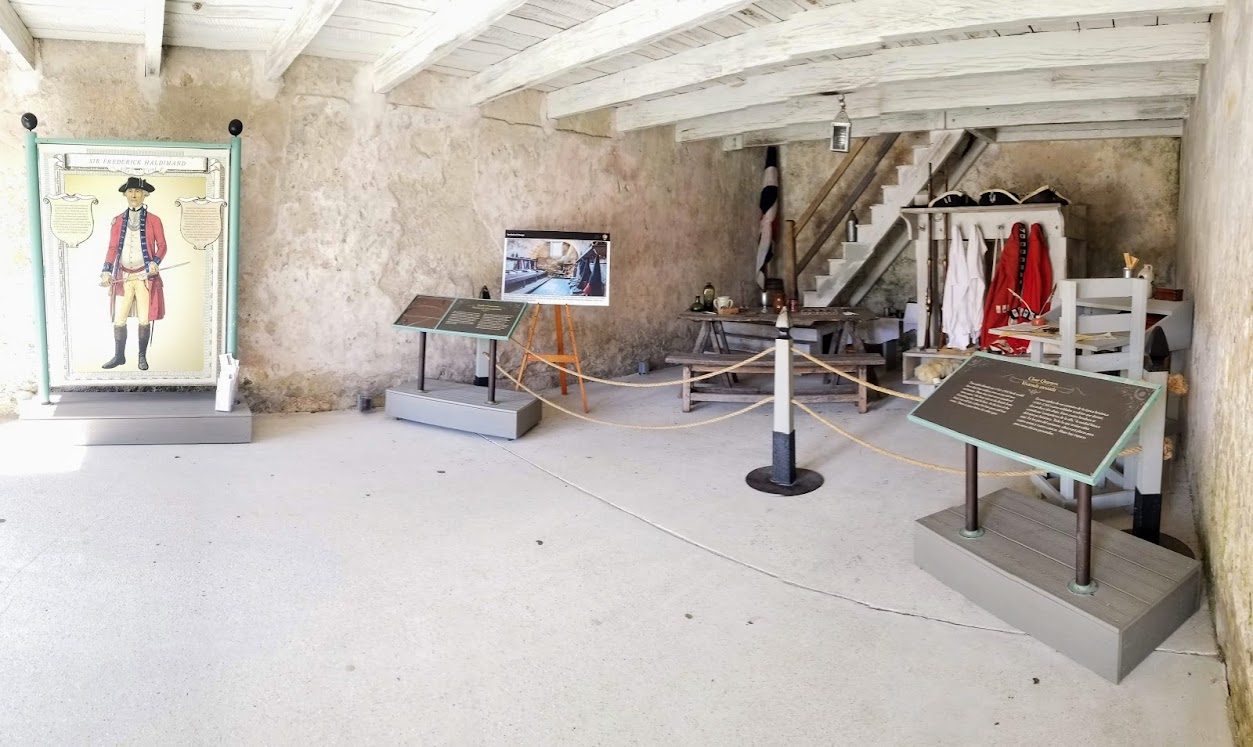 When the United States acquired Florida (1819–21), the fort’s name was changed from Castillo de San Marcos to Fort Marion in honor of the colonial American soldier Francis Marion. It subsequently served mainly as a military prison. During the Second Seminole War (1835–42) and in the 1870’s and ’80s, native Americans were held there. Confederate soldiers were imprisoned in it during the American Civil War. In 1900, the fort was decommissioned. Ownership of the Castillo was transferred to the National Park Service in 1933.

Although we had explored this historic masterpiece many years ago, it was a beautiful sunny day with cool temps, a perfect day to spend a few hours wandering around exploring the many rooms and reading the historical facts presented on the exhibit panels. And of course to enjoy the spectacular views of the Matanzas River, the surrounding city and the Bridge of Lions.

While examining the “Tidal Toilet”, one of the volunteers struck up a conversation with us, explaining how the toilet worked. 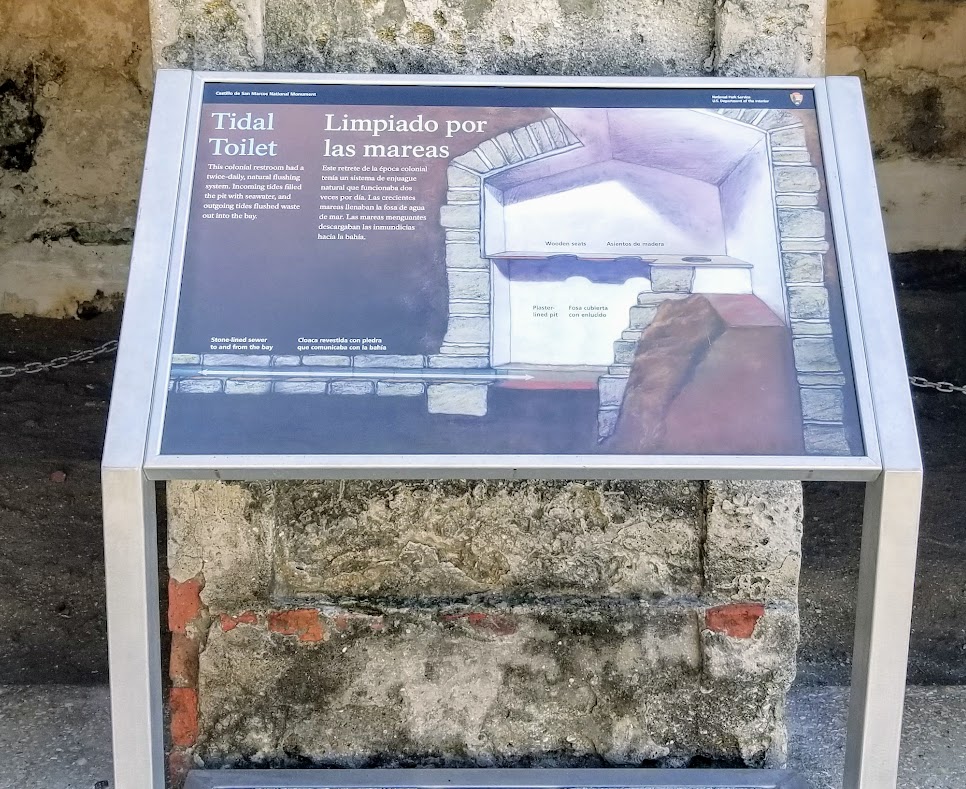 The Colonial “restroom” had a stone lined sewer to and from the bay so incoming tides would fill the pit with seawater, outgoing tides would flush it into the bay (read more details here). Probably not too bad unless the town was under threat of invasion when the townspeople (all 1600 of them) would be moved inside the fort along with their farm animals that grazed in the moat. How charming (and aromatic) that must have been!

A woman dressed in costume was busy at work making a basket out of long leaf pine needles. Thinking that she had been practicing this handcraft for years, we were surprised to learn that she had learned the craft from YouTube and had only been doing it for about two years. 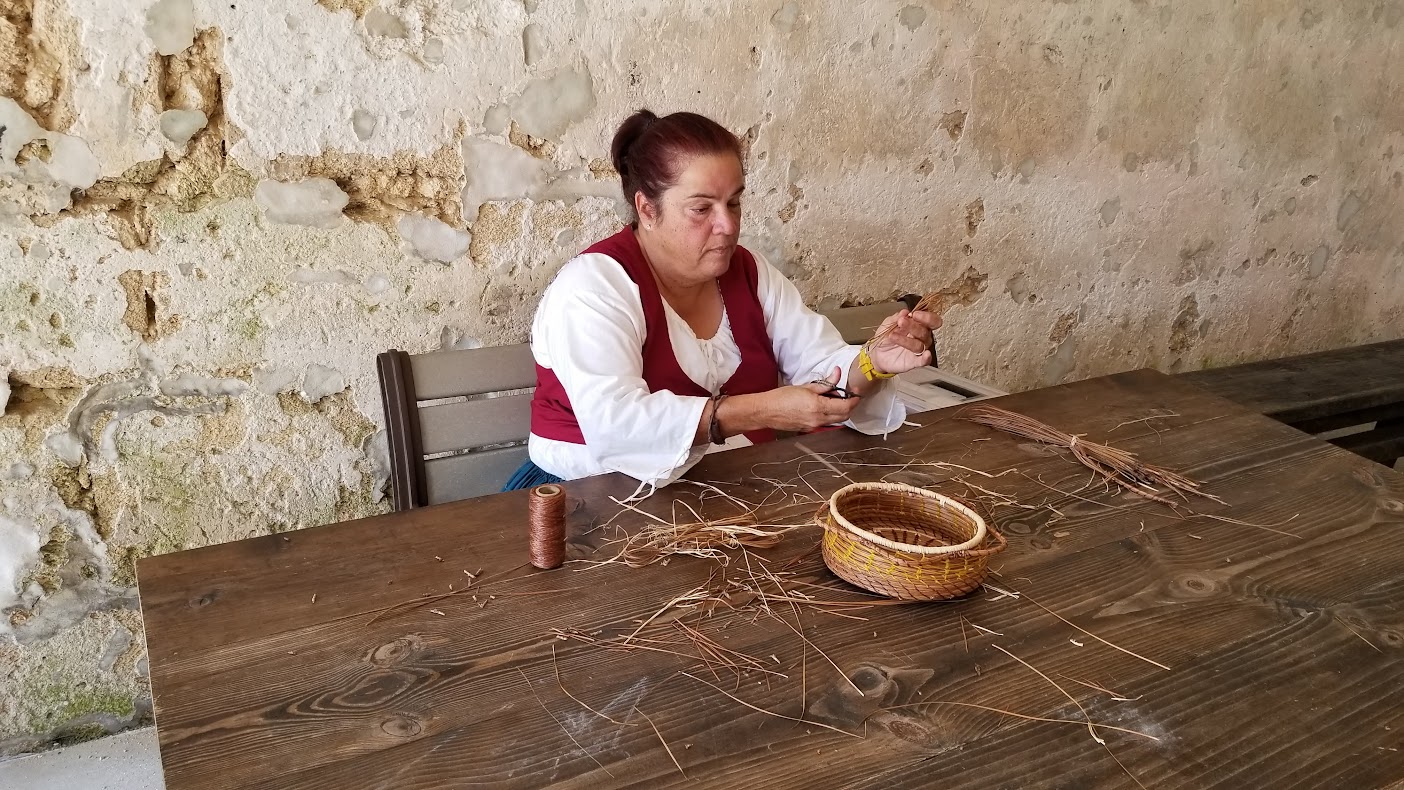 Up the stairs was the gun deck where by 1740, 70 cannons of varying sizes were mounted, the largest of which had a range of 3-1/2 miles. 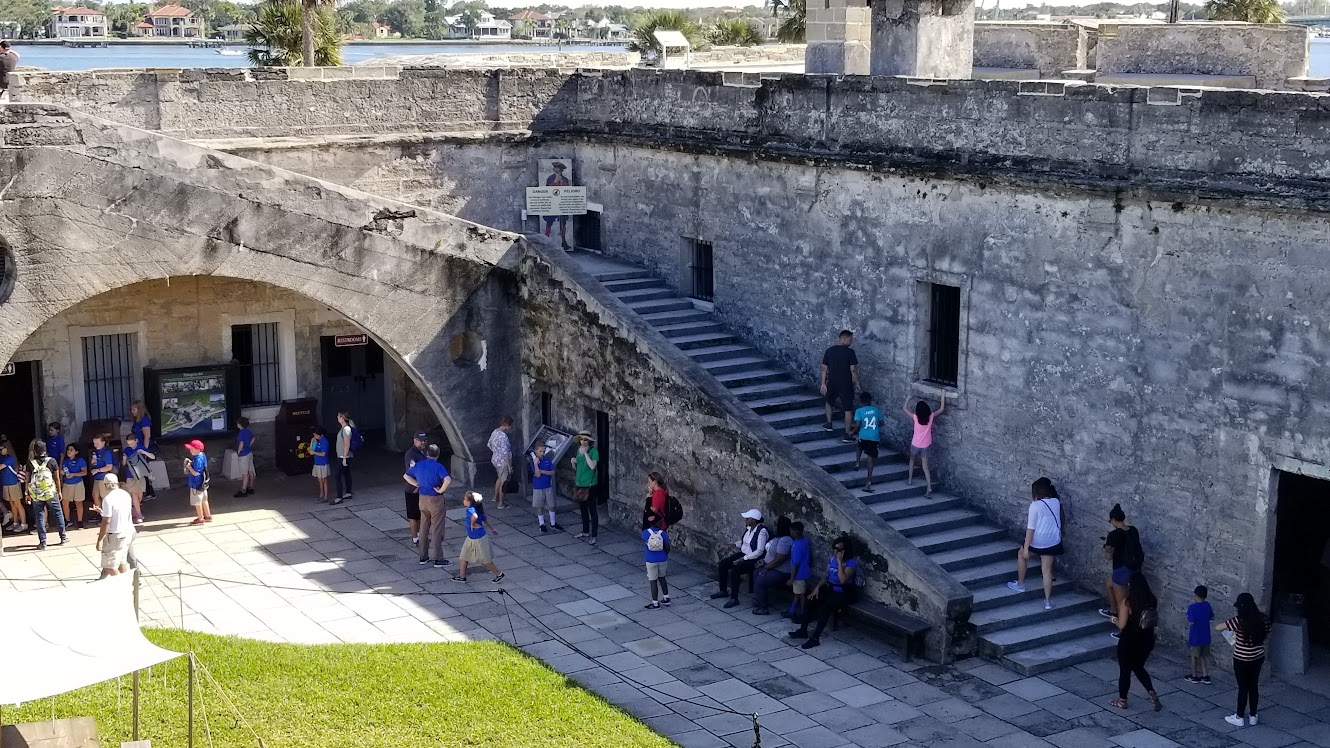 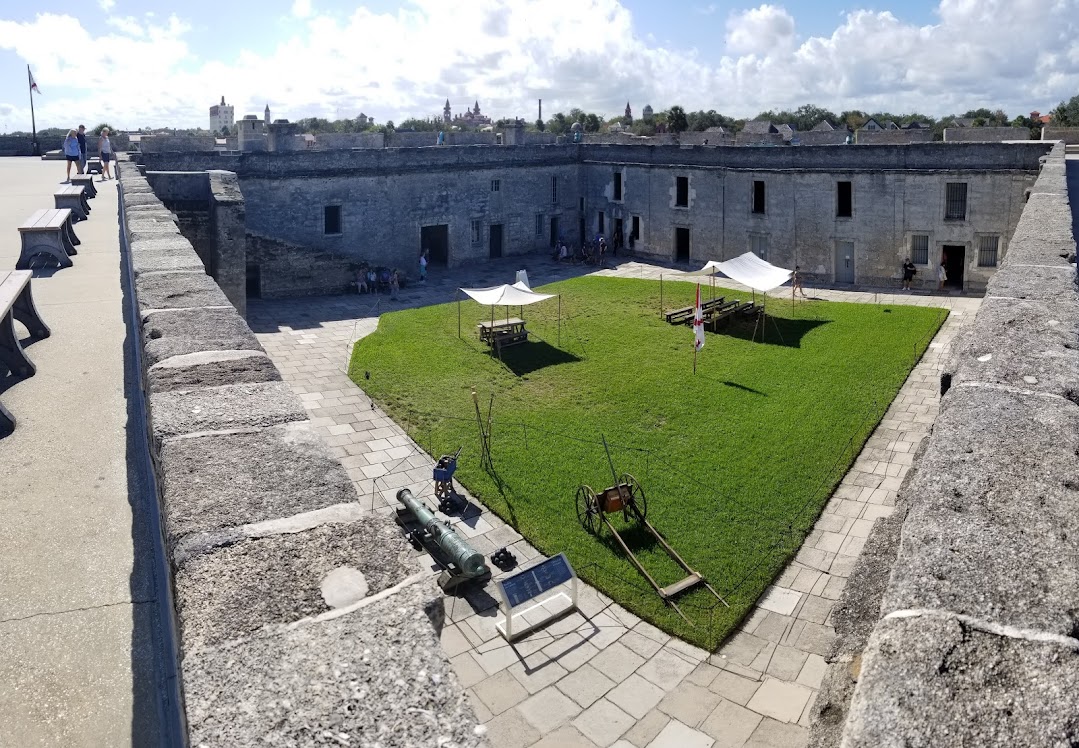 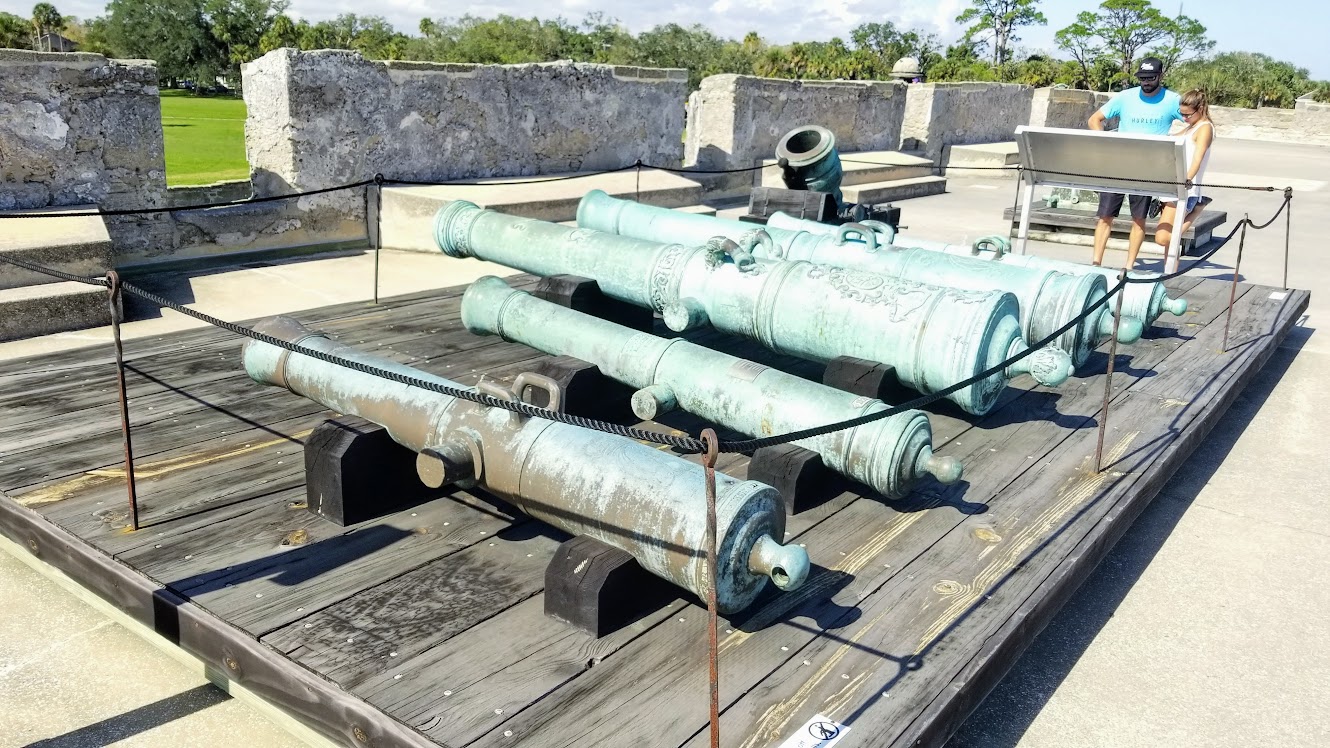 At the recommendation of the volunteer we had met earlier, we made our way outside the fort and walked the dry moat. 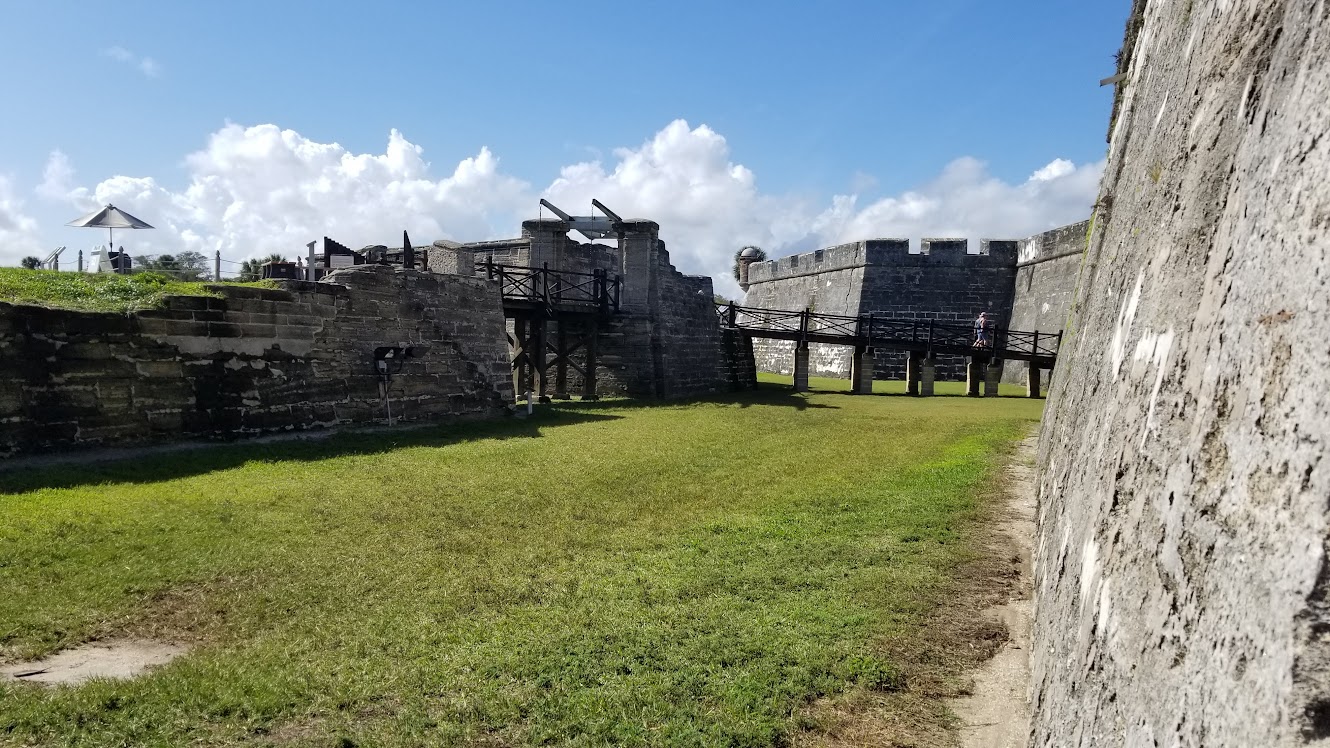 Here we had a close up view of the shot furnace which was where a team of soldiers prepared hot shot to be fired at enemy wooden ships in the hopes of setting the ship on fire. 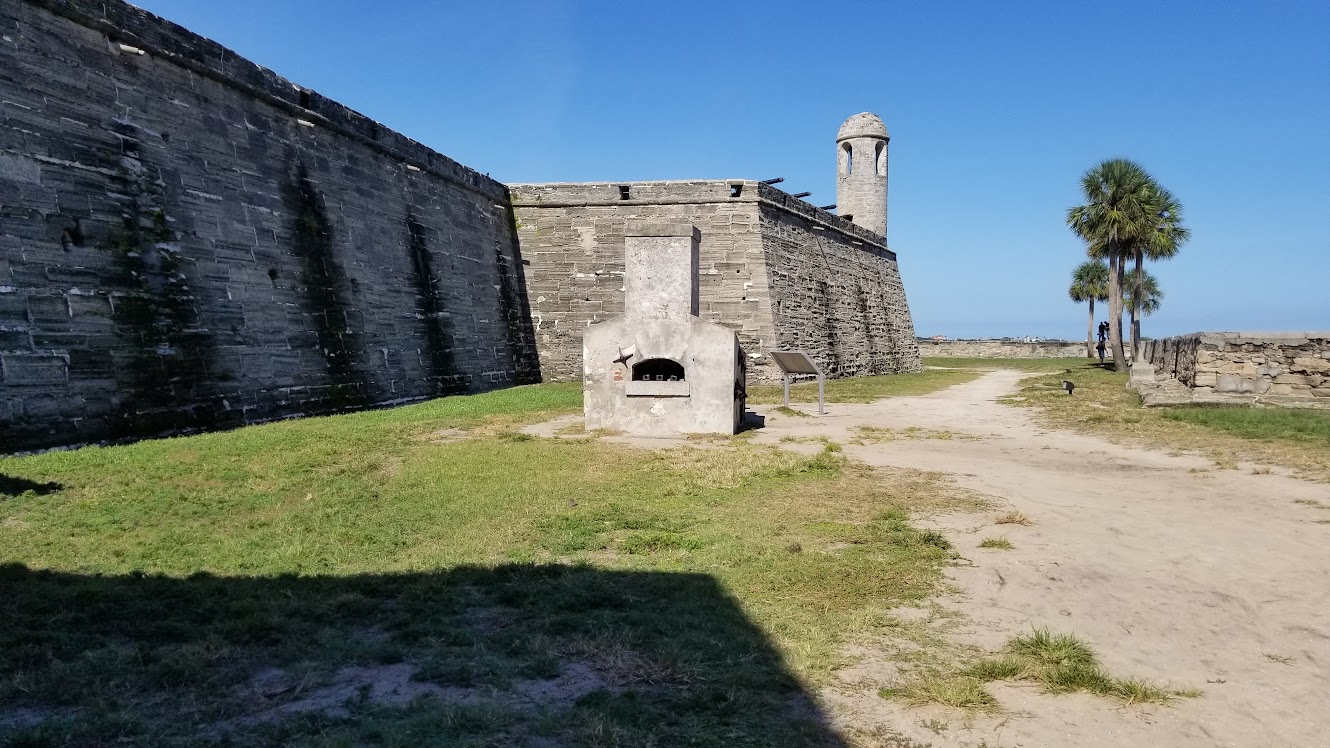 During a naval attack, cannonballs would be loaded into the furnace and heated for 30 minutes. Once red hot, other soldiers would remove the cannonballs with tongs and carry them to the guns along the seawall. Fortunately the soldiers never had to do this under attack but practiced frequently to prepare. The advent of ironclad ships during the Civil War made these Shot Furnaces obsolete.

Leaving the fort, we took a ride over to the St. Augustine Lighthouse which we visited the last time we stayed in the area. A captivating silhouette for sure! 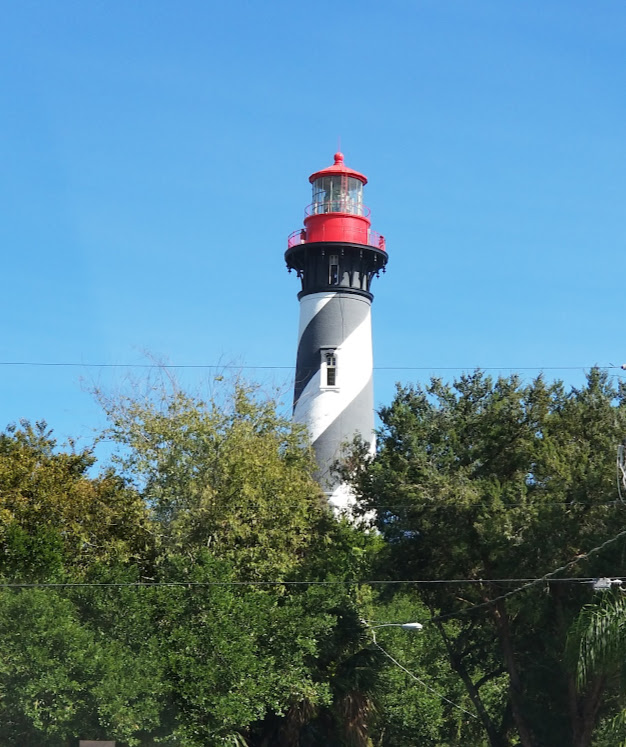 With a forecast of not so great weather the next day, an inside activity seemed like the best option. Perhaps lunch at the Ice Plant Bar, one of the top rated restaurants in the area, would fit the bill. The restaurant is located in the same building as the St. Augustine Distillery which we toured in 2018. Arriving there a little too early for lunch, the timing was perfect for us to kill some time by taking the tour again. Just as enjoyable and informative the second time around. 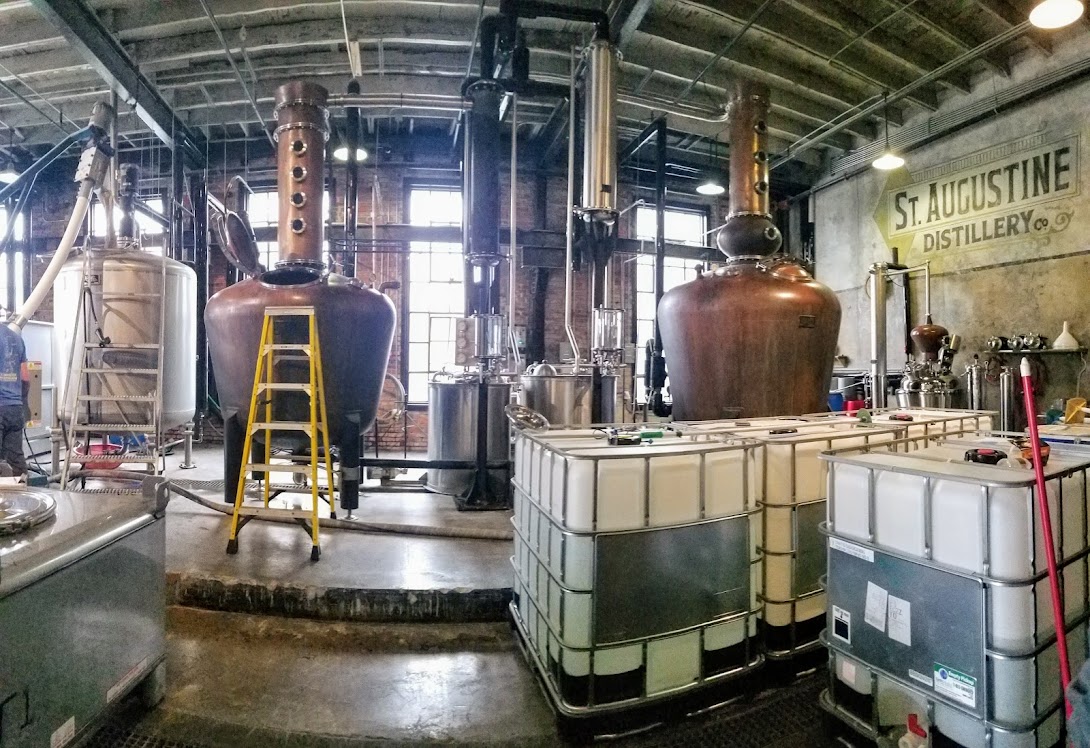 On their website it states that the “Original Ice Plant building dates back to 1927” and that the owners “wanted to restore the feeling of walking into an old factory”. The Edison-style lights casting an amber hue on the exposed brick walls, the original pine floors worn to a glowing patina, the original bridge crane on rails overhead the bar once used to pick up huge blocks of ice (to be sold to local customers and shrimp boats), the ice hooks hanging on the wall and the industrial looking tables all certainly created that old factory feel.

Even the rest rooms reflect history! 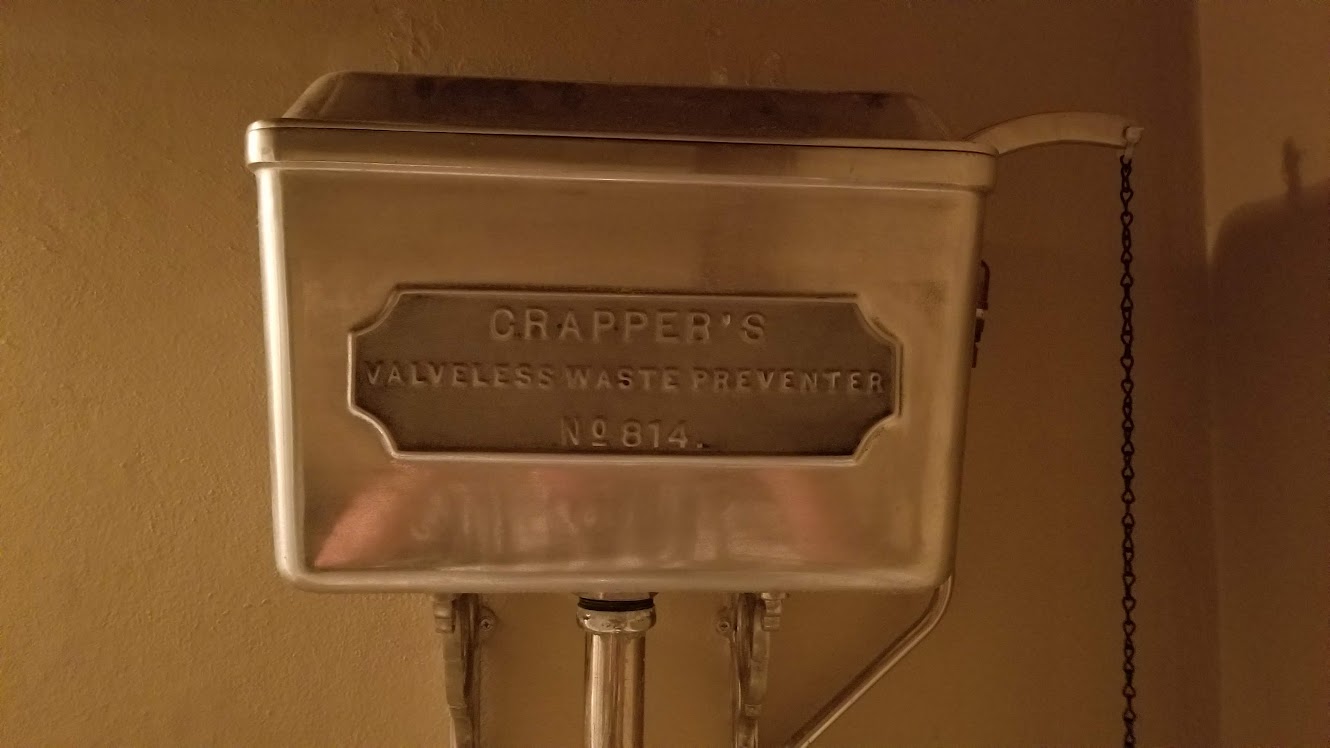 Speaking of ice, the Ice Plant makes its own large blocks of ice, using slow-frozen filtered water. The staff chainsaws those large blocks of ice into small “rocks”, spheres, pebbles and shaved ice, resulting in a cold, hard, diamond-clear ice that doesn’t dilute the flavors of their custom cocktails. Learning all this, we simply had to sample a New World Gin & Tonic made with St. Augustine Distillery New World Gin, Tonic, Soda and garnished with a Grapefruit Peel (what no lime?). So good, not your typical restaurant G & T for sure!

This farm to table restaurant and bar is open for lunch and dinner, serving grass-fed beef and burgers, local seafood, vegetarian options and daily specials. Knowing that everything is made from scratch here, each entree on the menu sounded delicious so it was difficult making a decision. One of the recommendations from our server was the Buttermilk Fried Chicken & Hoe Cakes ($16), served with collards, sawmill gravy and apricot butter so that’s what we both had.

Not being from the South, we had to inquire what Hoe Cakes were – they are little pan fried cornmeal medallions similar to a pancake. Oh my, what a delicious meal! I think our favorite restaurant, The Raintree has moved to second place! 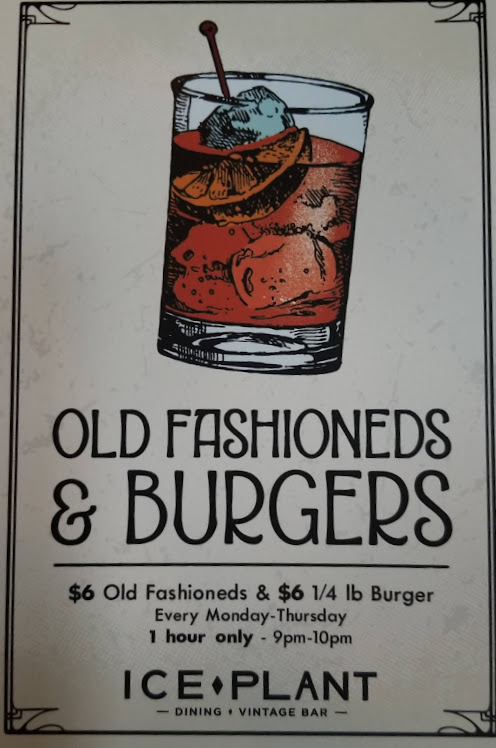 If we had had more time we would have returned for their Monday through Thursday Burger and Old Fashioned special.

That evening we prepared for our departure the next day. So long, St. Augustine! I’m sure we’ll see you again in the near future. But in the meantime, just around the corner is even more fun!