219 steps up to be exact! That’s what it takes if you want to enjoy spectacular views of St. Augustine and the Atlantic Ocean from the top of the St. Augustine Lighthouse & Maritime Museum. All those steps are not for the feint of heart, but let me assure you it really wasn’t that big of a deal. But more about that later….. 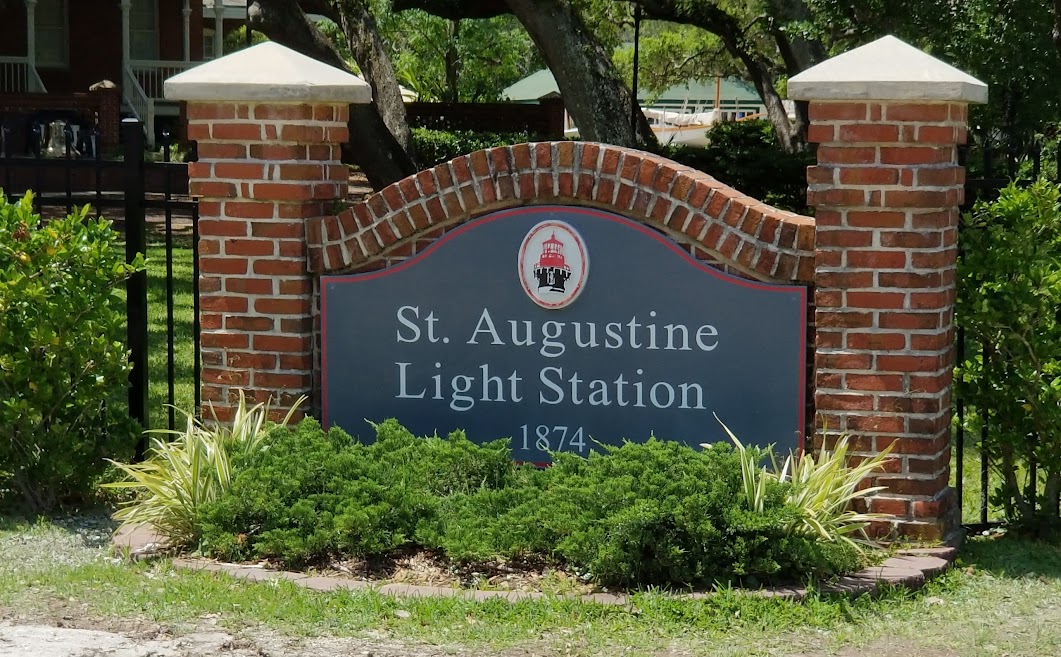 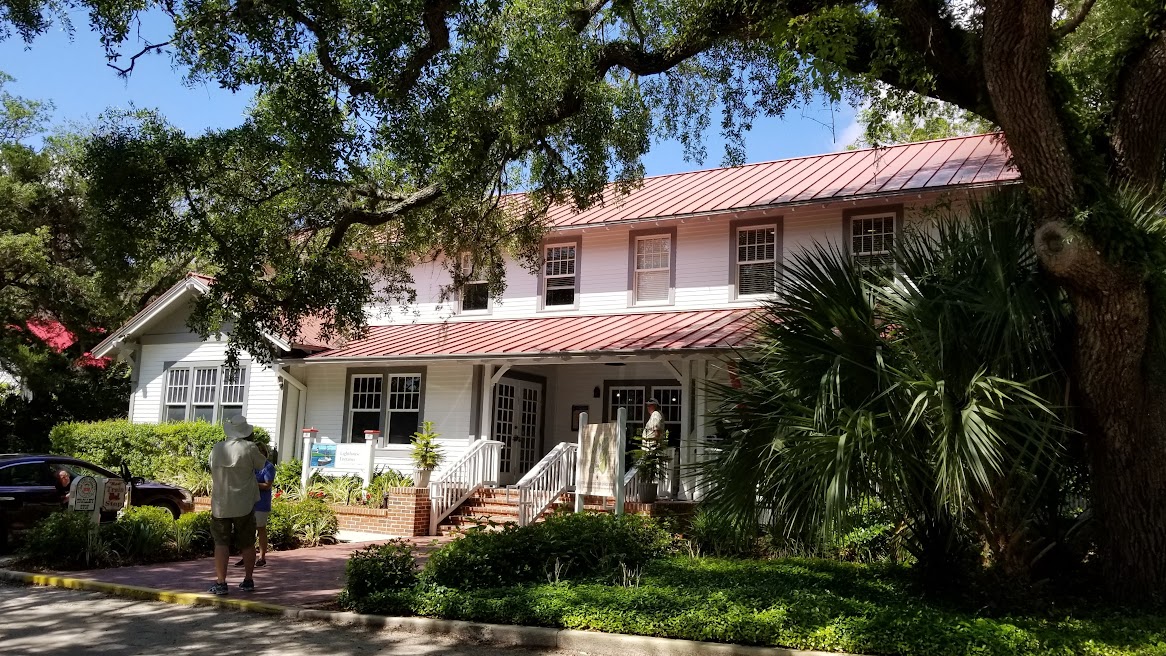 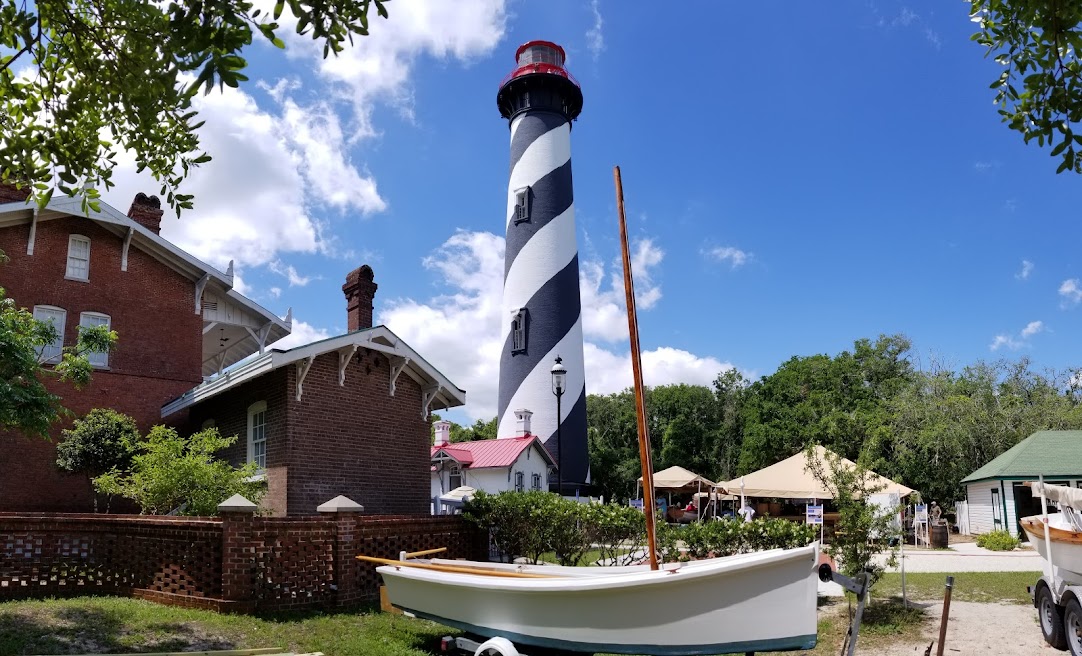 The lighthouse was an attraction that we had talked about visiting on numerous occasions during previous visits to St. Augustine but for whatever reason it never made it to the top of our list. Perhaps because we had the misconception that there wasn’t anything else to see or do there besides the lighthouse. Boy were we wrong!

If you go, be aware that there is an admission fee – $12.95 for adults, $10.95 for seniors and children age 12 and under, but it includes more than just climbing those 219 steps to view the breathtaking 360º panoramas. It also includes the 1876 Keepers’ House Exhibits, access to the Maritime Hammock Nature Trails, the Tiny Clues Interactive Archaeology Activity program (10:00 a.m. & 4:00 p.m.), and the Behind the Scenes Lighthouse History, Shipwrecks & Boatbuilding Tour (11:00 a.m., 12:00 p.m., 1:00 p.m., 2:00 p.m., 3:00 p.m.). Note that there are several other tours offered as well. For visitors who fancy the paranormal, there is the Dark of the Moon Ghost Tour ($24.95). Or for those who want to watch a beautiful sunset, then the Sunset Moonrise Tour ($30) might be a better option. For a really unique experience while the light is still lit, there is their Exclusive Lens Room Tour. Not sure of the cost of this tour as no price is given on the website.

Outside the Visitor Center, there were many small boats on display. 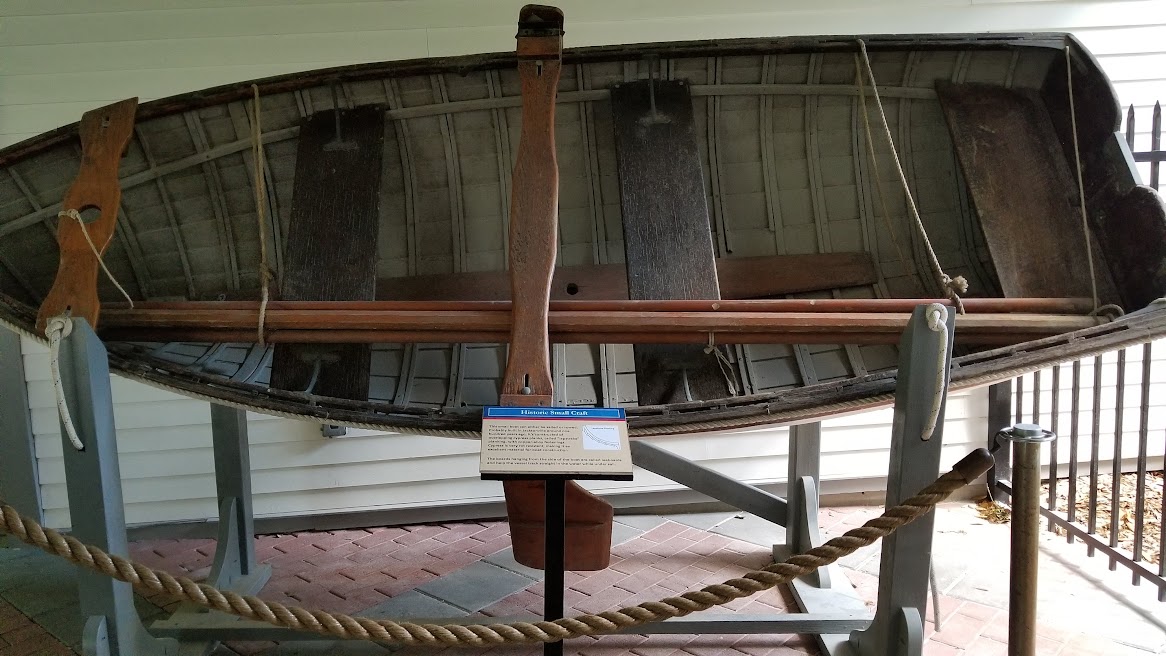 After perusing the exhibits inside and outside the Visitor Center, we joined the next available Behind the Scenes tour. What an interesting tour! Here are just a few of the facts we learned: 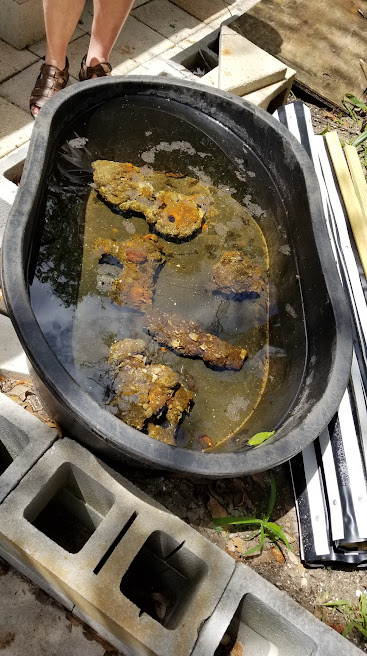 The on-site Heritage Boatworks is a volunteer-driven heritage boat building program, which has built a number of traditional wooden boats using historical designs and techniques from various time periods in the port’s history. 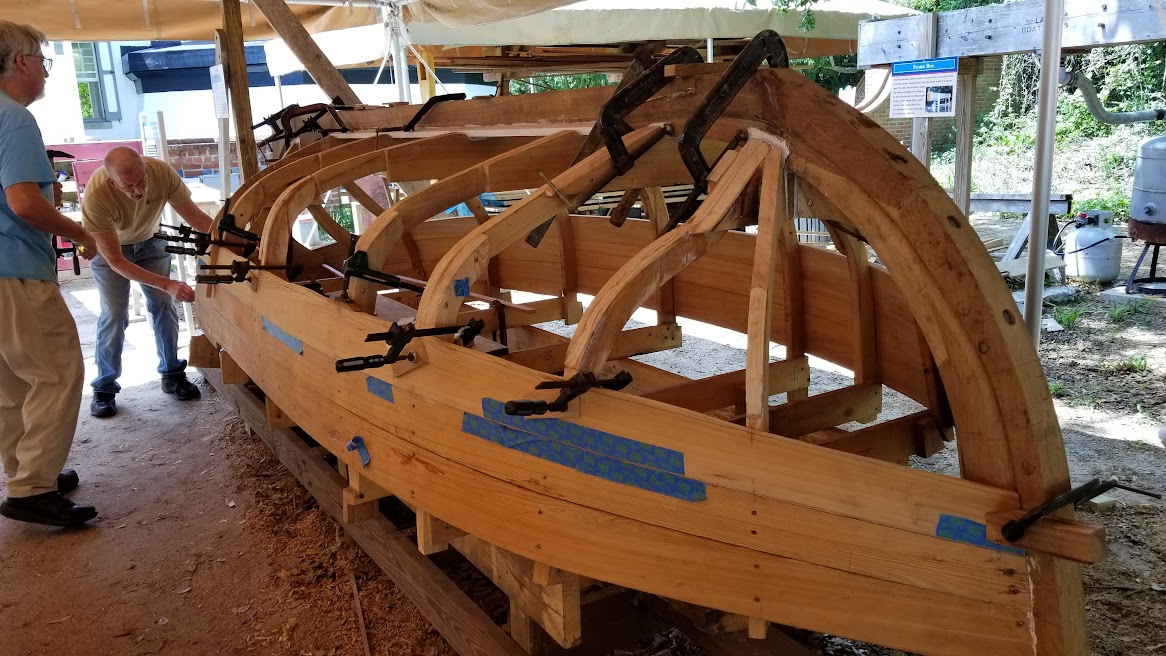 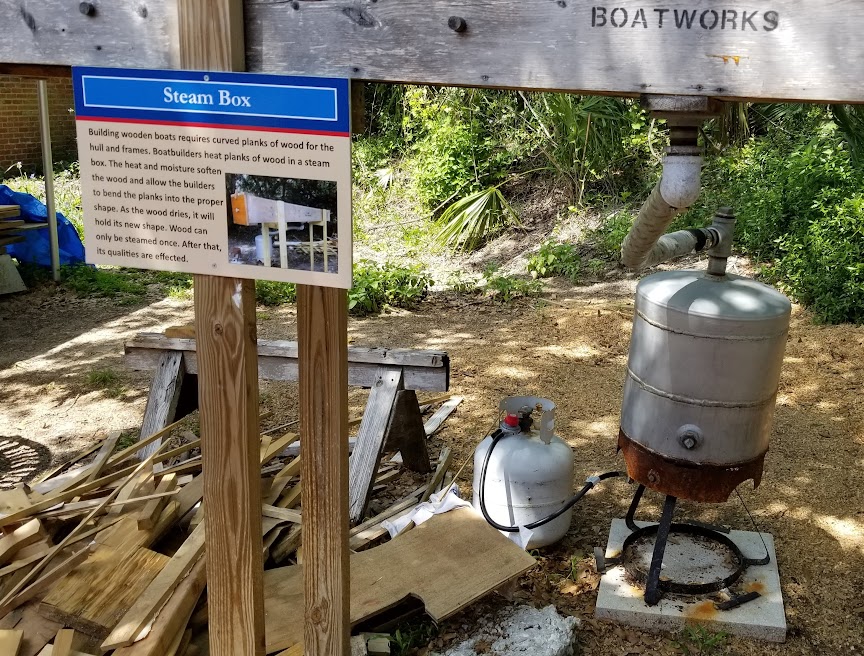 We asked one of the volunteers how long it took in general for them to build a boat. He replied that it depended on the type of boat, then pointed to the sloop in the picture below, responding that this one took 5 years! It takes that long because the volunteers only work several hours a week. 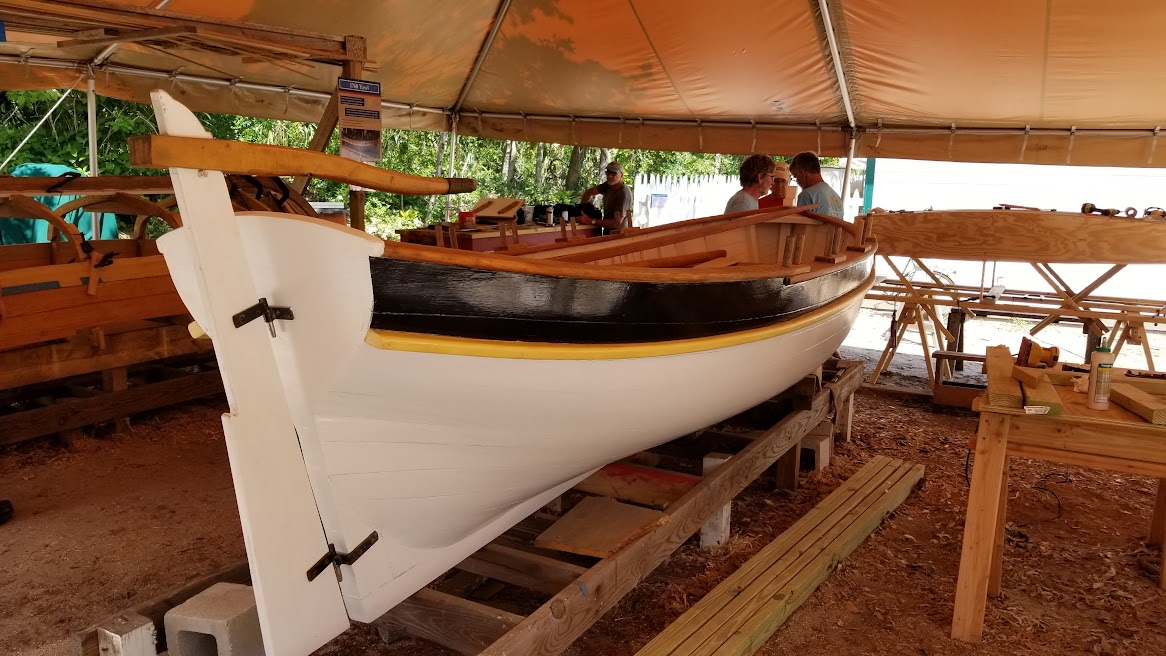 After the tour, it was time to conquer the steps. Inside the lighthouse there were two rooms of interest. The first was  the keeper’s office which displays the tools used by the keeper. 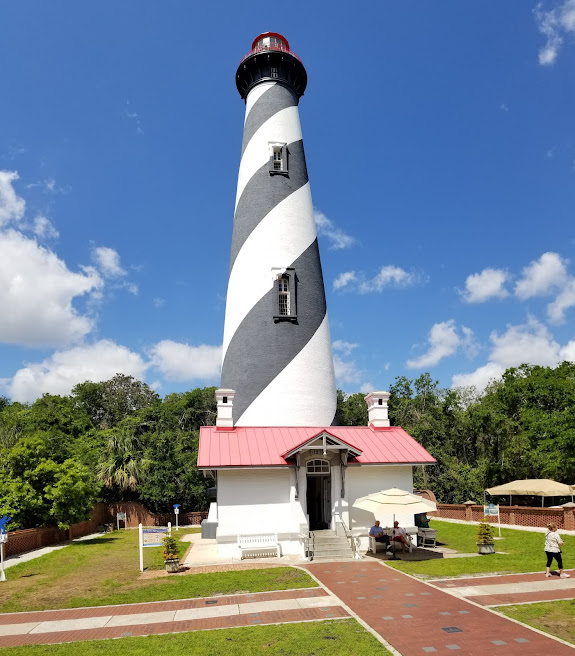 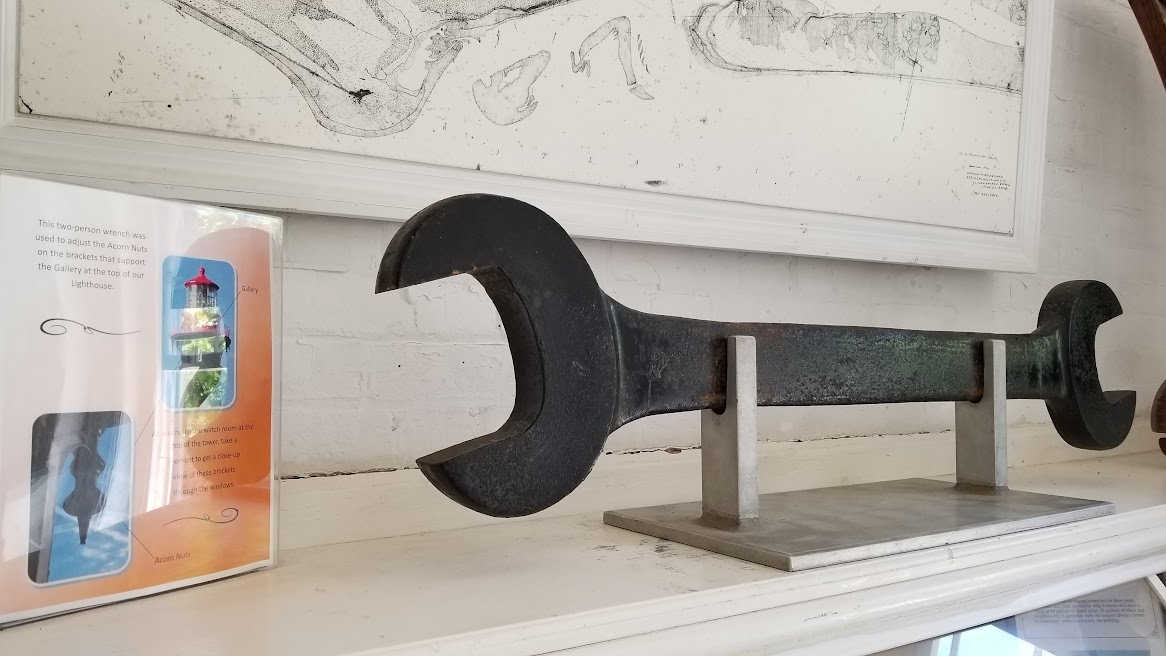 And the second room was the oil room where we were urged to try lifting the 5 gallon oil bucket (weighed 30 pounds when filled) the keepers had to carry to the top every 2-1/2 hours! 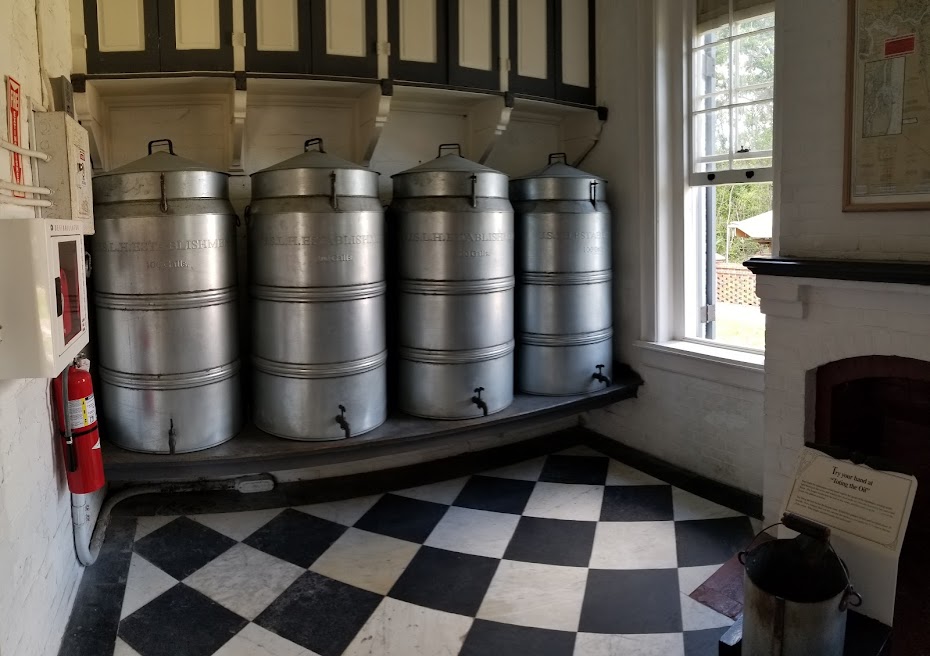 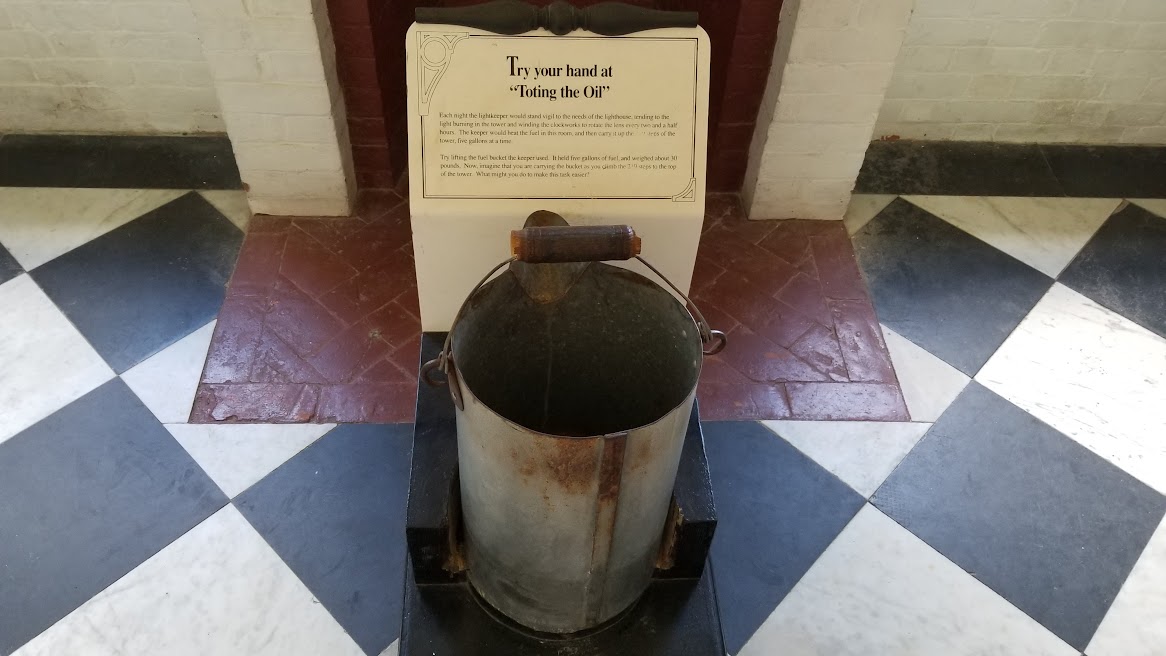 Finally it was time to start our climb! The worst part was that the steps were narrow so we had to stop and wait for people who were on their way down. 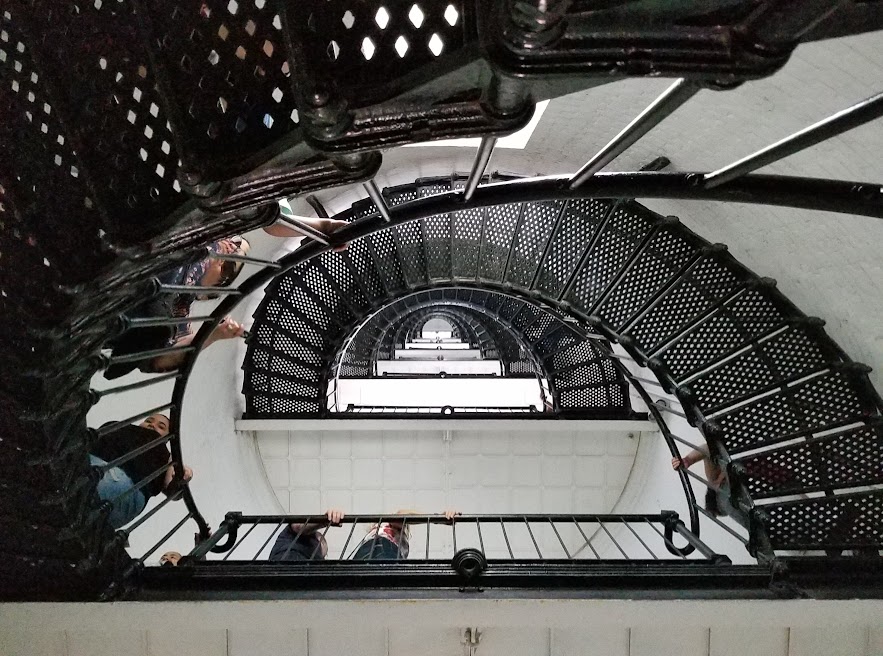 Surprisingly it wasn’t too bad – there were eight landings where we could stop and rest, each with interesting information. I must admit that it was depressing at the first landing – it said that going up only burned 24 calories! Going down was 11 calories! Huh? That’s just to the first landing, right? Certainly not for all 219 steps! It seemed like we got to the top in no time and weren’t even out of breath! I wonder if maybe all those previous months at much higher altitudes out west had improved our stamina? 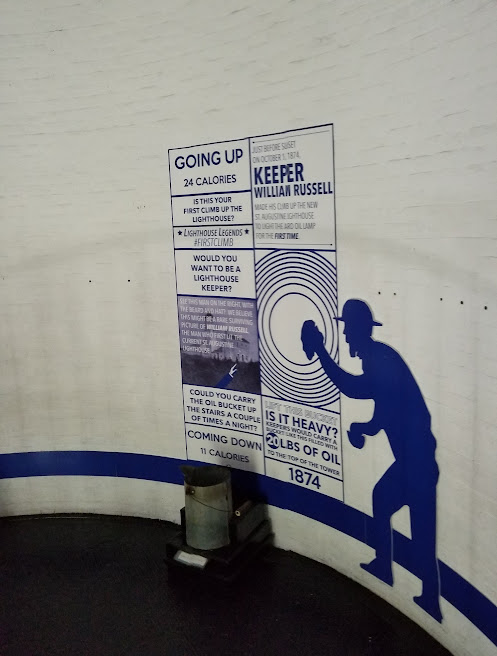 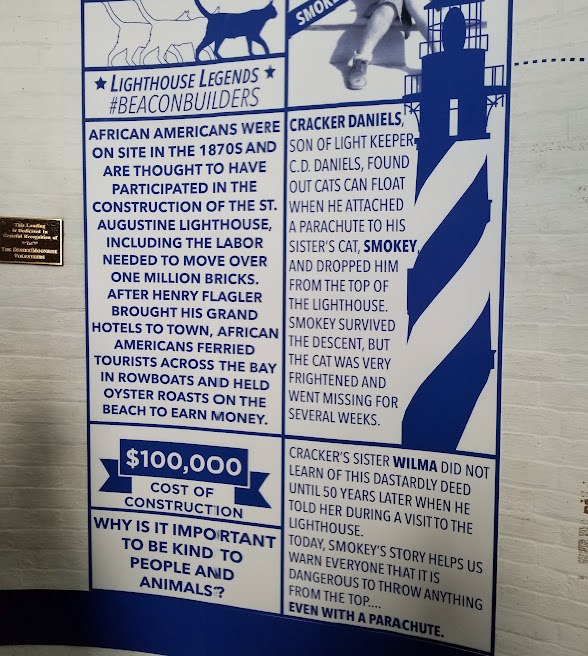 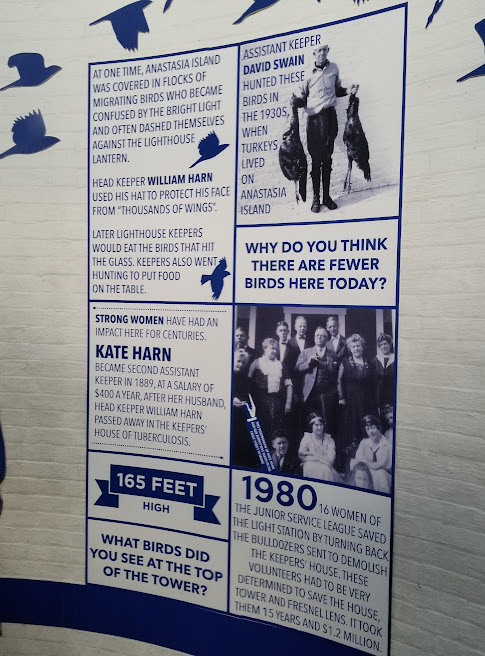 At the top we could enter the “rotating room” for a better view of the Fresnel Lens. Hard to believe that a 14 year old vandal’s bullet damaged the lens in 1986 causing the light to be darkened in 1992. In 1993 the St. Augustine Junior Service League raised the necessary funding to repair the lens. The repair turned out to be a major accomplishment itself, since no one really knew how the original lens was actually manufactured. It was re-lit in 1993. 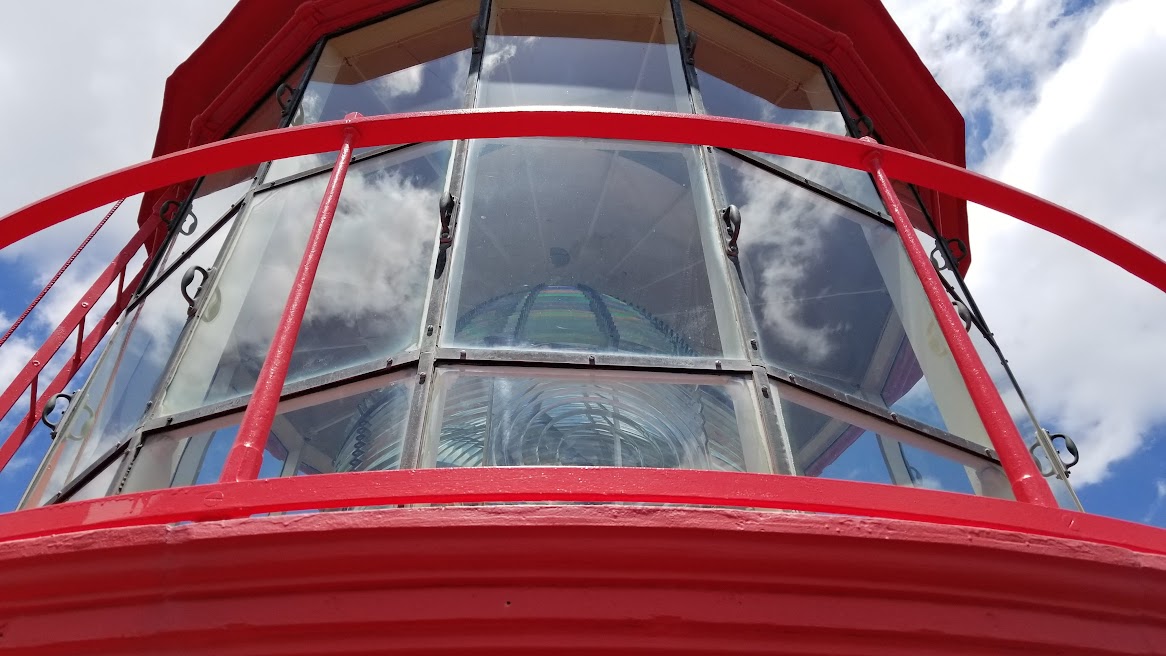 There is a series of very informative You Tube videos titled “Enlightened, What Is A Fresnel Lens? A St. Augustine Lighthouse Educational Program”.  There are four episodes, each one focusing on a different aspects of the lighthouse from it’s history to the intricate details of the Fresnel Lens. Click on each of these episodes to see the video: Episode 1, Episode 2, Episode 3, and Episode 4. 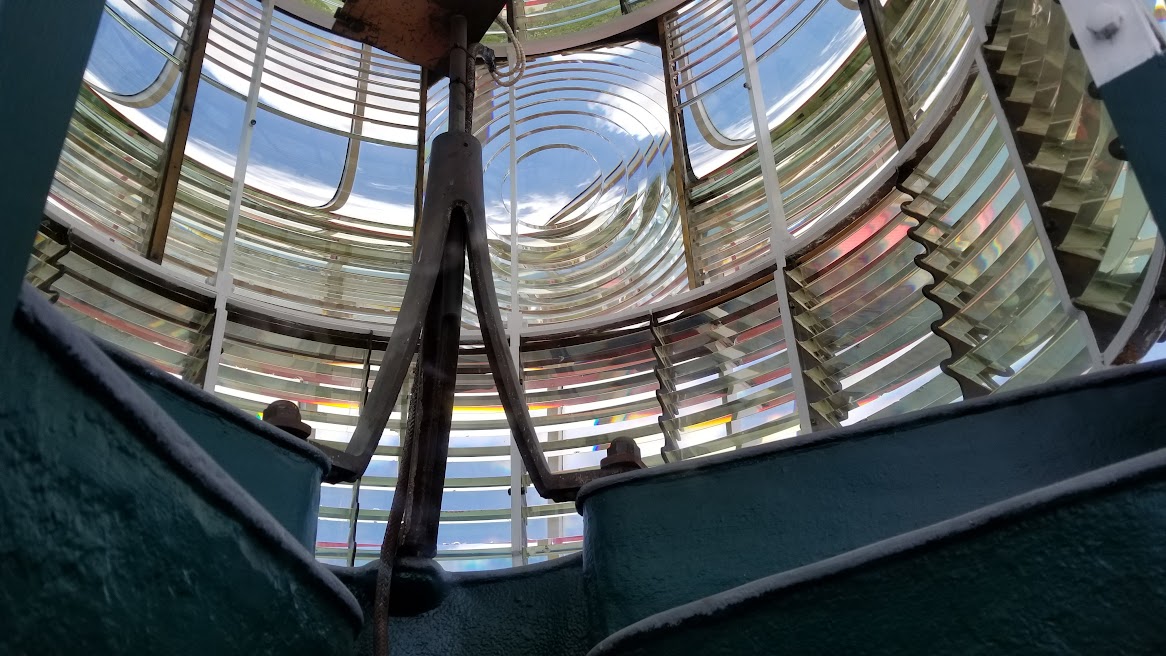 The views of St. Augustine and the Atlantic Ocean were spectacular! Certainly well worth the climb! 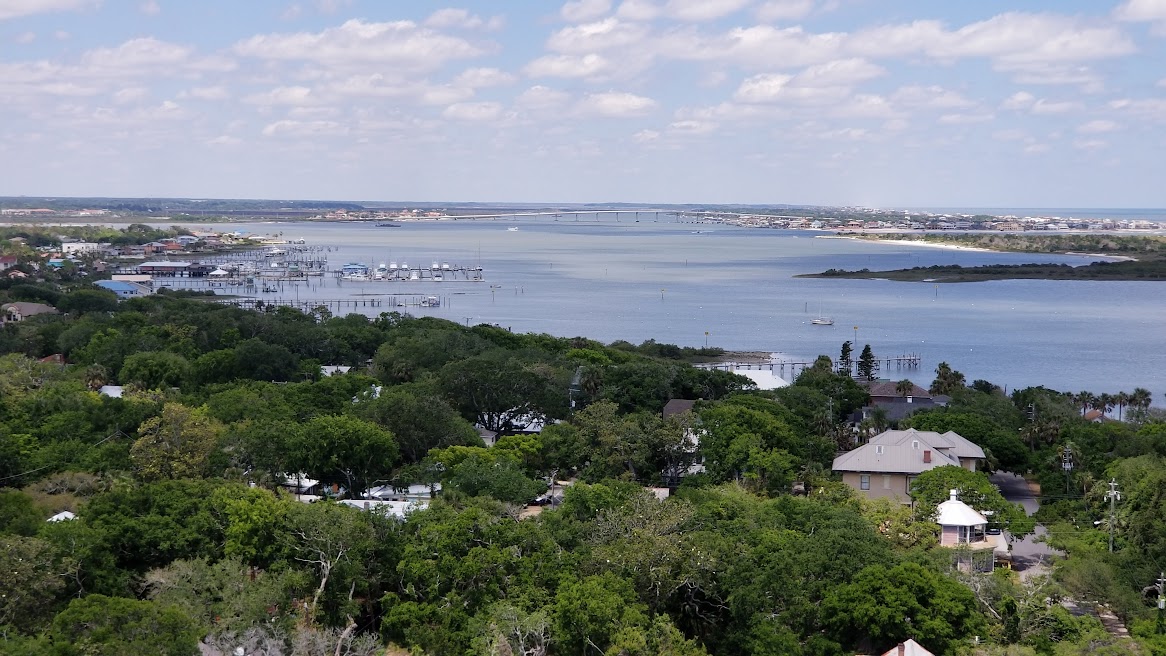 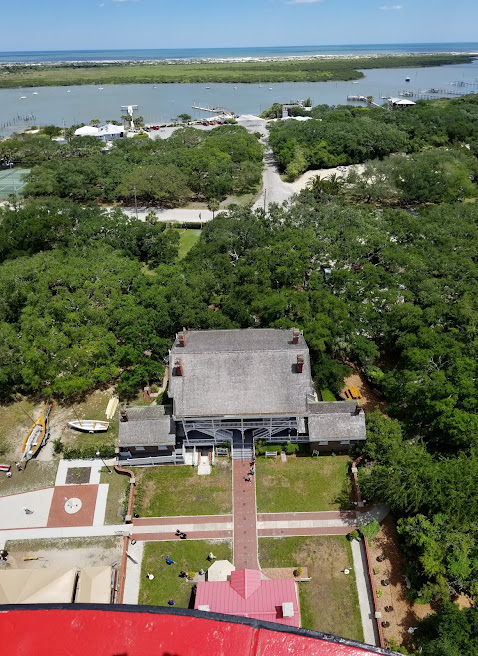 Once down from that lofty perch, we walked over to the Keepers House located directly across from the lighthouse, it was added to the property in 1876. The triplex held two families and a young, single, 2nd assistant keeper. Brick summer kitchens (separate buildings on each end of the main structure) were added in 1886. The original structure was completely gutted by an arson fire on July 28, 1970 and closed. But fortunately the St. Augustine Junior Service League in 1980 took on the restoration project – it opened as a museum in 1988. 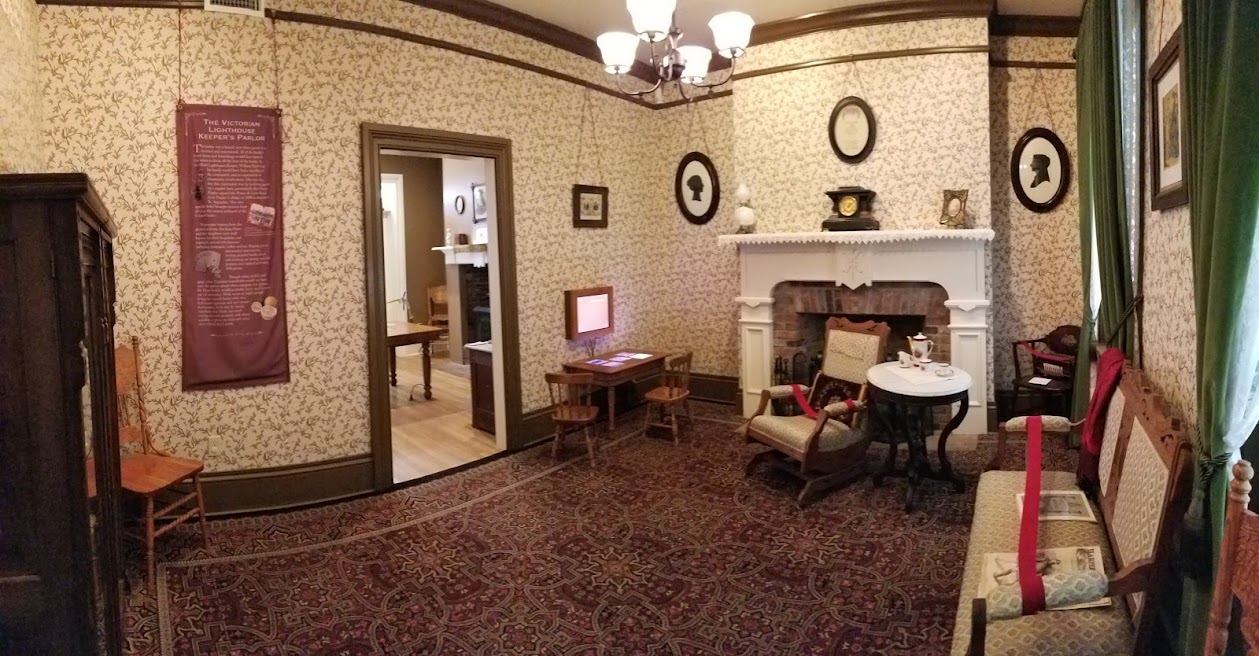 In the house, we learned about the lighthouse keeping in the late 1800’s from Head Keeper William Harn’s family. The main floor shows how the keeper’s house might have been decorated.

Down in the basement was the Wrecked! exhibit where artifacts from a 1782 British loyalist shipwreck from the Revolutionary War which was found in St. Augustine are on display. Exhibits explained how underwater archaeologists located this historic shipwreck on the ocean floor. 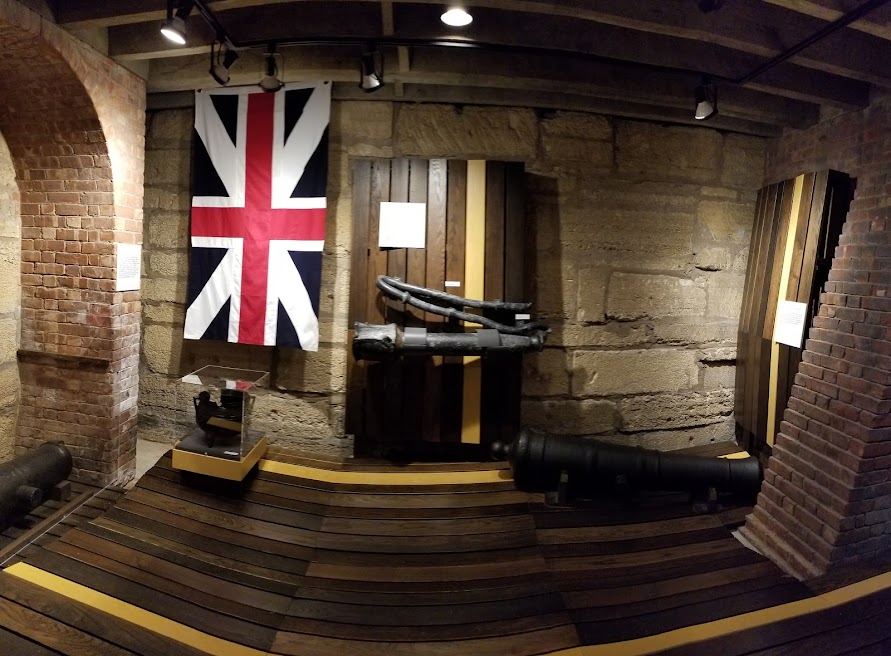 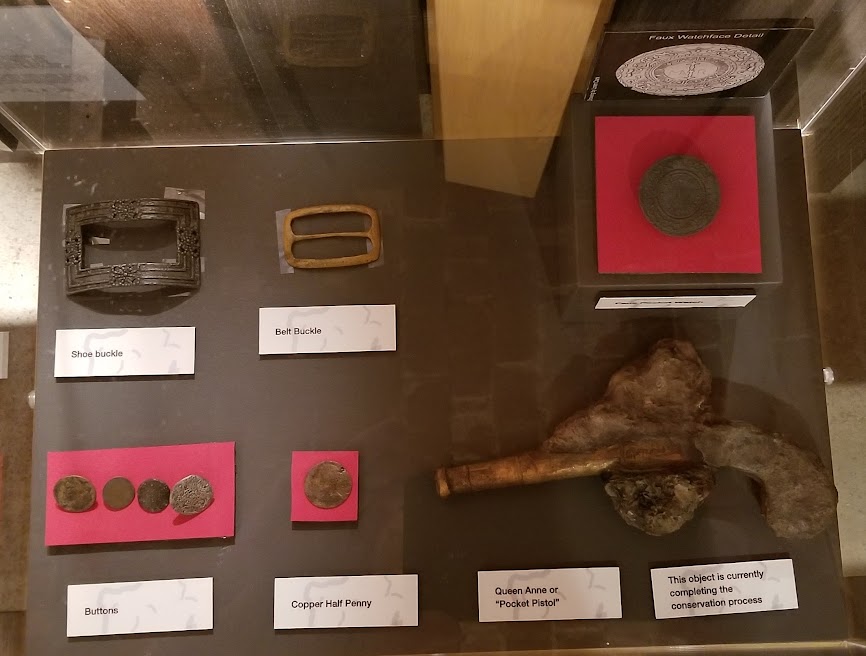 In front of the lighthouse keeper’s home is the United States Coast Guard Memorial Bell. The Bell garden honors two tragedies. One memorializes Steven Senecal, a charter fisherman who was lost at sea in 2007 and the other honors the four members of a USCG flight crew who died in training while fighting the war against drugs in 1990. 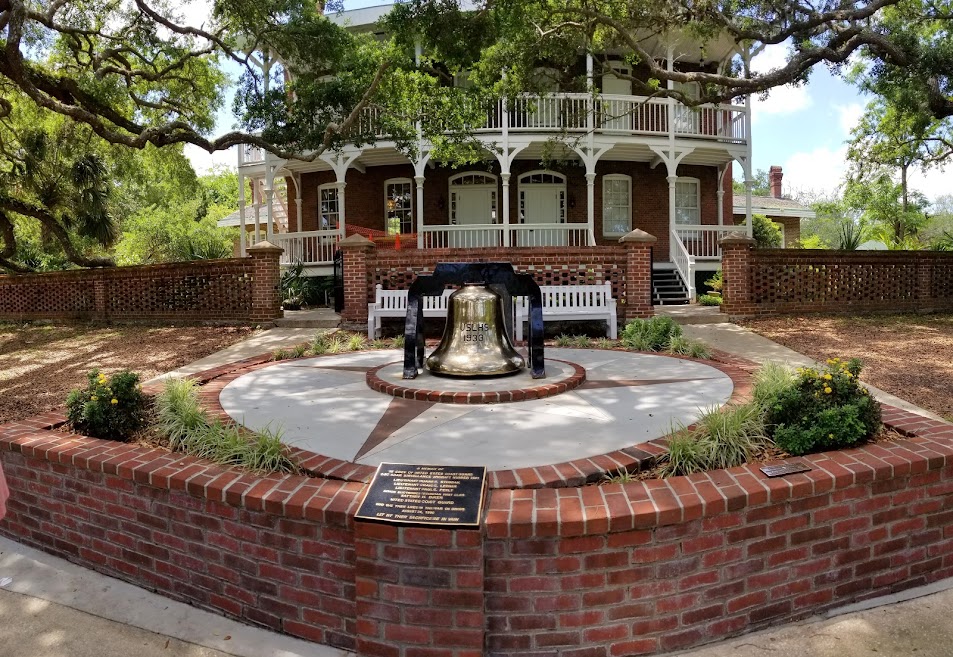 Leaving the lighthouse behind us, we continued south on A1A to the St. Augustine Beach area  where we stopped at the 11.5 acre Ocean Hammock Park. A 1700 foot boardwalk which crosses over marshland and bordered by cedar, live oaks and sea grass eventually leads to the beach. 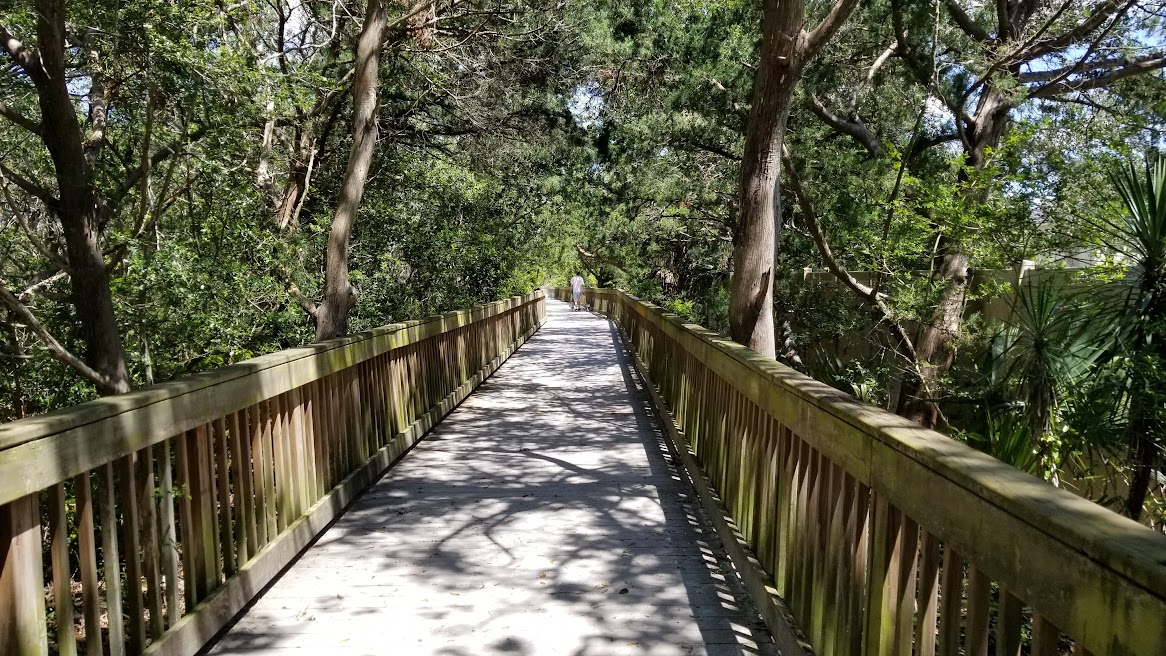 That pretty much wraps up our sightseeing excursions in St. Augustine. I have to say that even though this city is very old, visiting here has never become old to us.

So where to next? We would saying goodbye to the Sunshine State, heading to the Peach State. Stay tuned for what we did there!