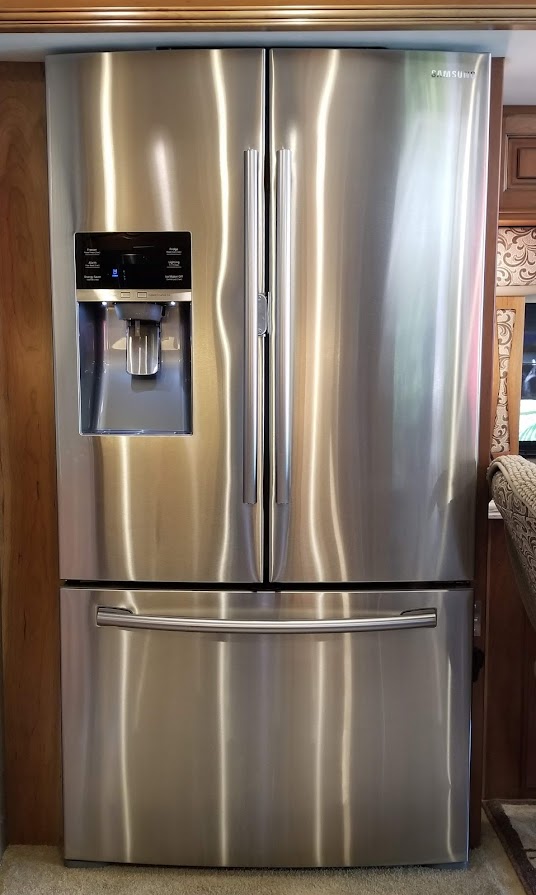 Refrigerators designed for RV and Marine use have always had doors that securely lock closed and are specifically designed for the severe conditions likely to be encountered in a moving vehicle. However, with larger residential style refrigerators now in vogue, these large appliances intended for stationary household use, do not have factory designed solutions to ensure the doors remain shut during severe movement. RV builders have attempted to address this shortcoming by employing everything from simple Velcro straps to specialized latches, but have only realized limited success.

The Samsung RF23HCEDBSR fridge on our Entegra (shown above) has two latches like the design shown to the left. One mounted between the french freezer doors and another mounted on the right side for the bottom freezer. Many Entegra’s from 2014-2017 have this model fridge and the latches shown.

While that latch is well built and appears secure, it still leaves a bit of play and manages to unlatch itself occasionally while we are driving. Also, once installed there is no means to adjust this latch, so if it was installed a bit out of alignment, or the doors were later adjusted, that reduces its effectiveness even further.

Due to the relatively frequent number of unlatching incidents we experienced (with near disastrous results), we added backup to the latches by looping a web type luggage strap thru the three door handles. This kept the doors from flying open fully, but the doors would still open a few inches and several times we landed at our destination with the “open door” alarm beeping away and the fridge or freezer temp elevated.

Then we heard about the Fridge Fixer. Instead of a typical latch, it is a clever “T” shaped “wedge” that mounts (in our case) at the common intersection of the three doors. This one simple wedge holds all three doors snugly closed, looks attractive while remaining unobtrusive, doesn’t rattle, can’t scratch and is very easy to lock and unlock. The wedge piece also contains a magnet and can be stored by simply sticking it to the fridge – or sticking it to the included special landing pad if your fridge doors are non-magnetic like ours. 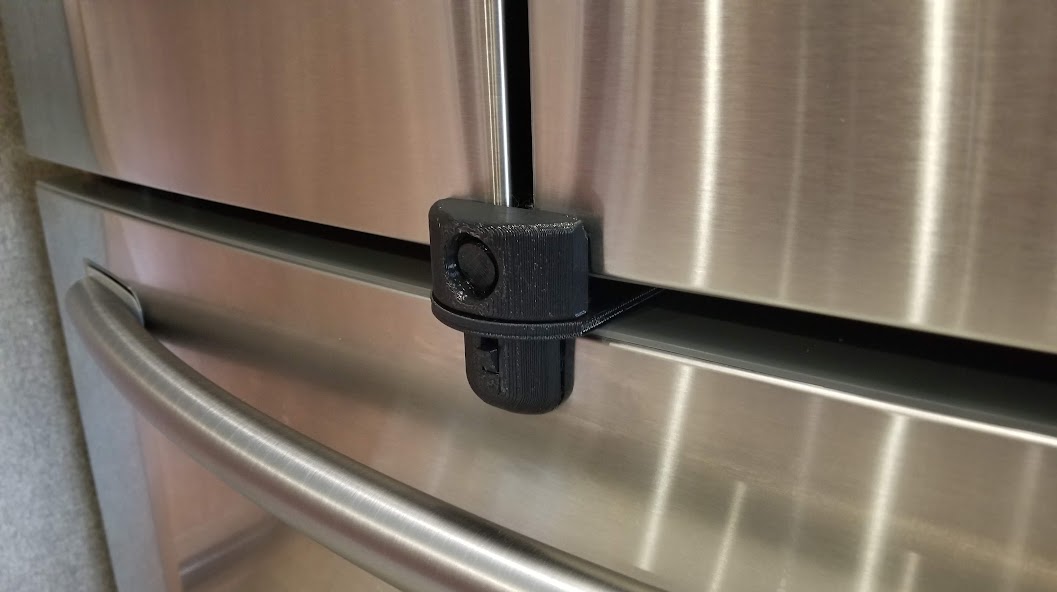 Installation of the Fridge Fixer on our Samsung RF23HCEDBSR was also extremely fast and simple. The Fridge Fixer model for this fridge is an adhesive design so it is a simple matter of marking the center point, cleaning the mounting surface with alcohol, then just peel and stick. It even comes with an alignment piece to ensure proper spacing during installation. 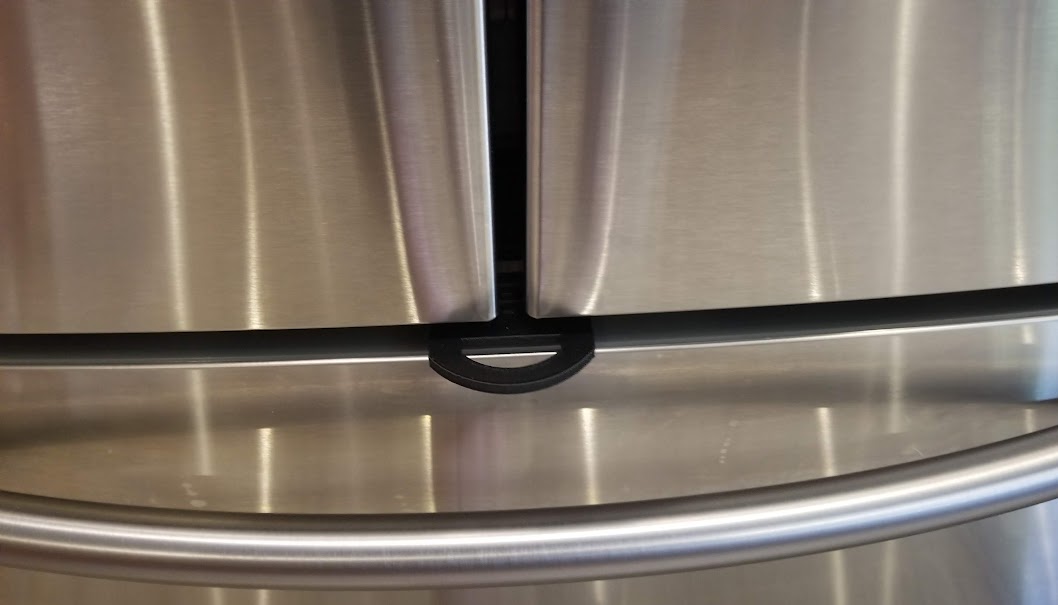 Also note the Fridge Fixer design incorporates a second location for the “T” wedge to create a “prop open” position to keep the fridge doors ajar during storage. 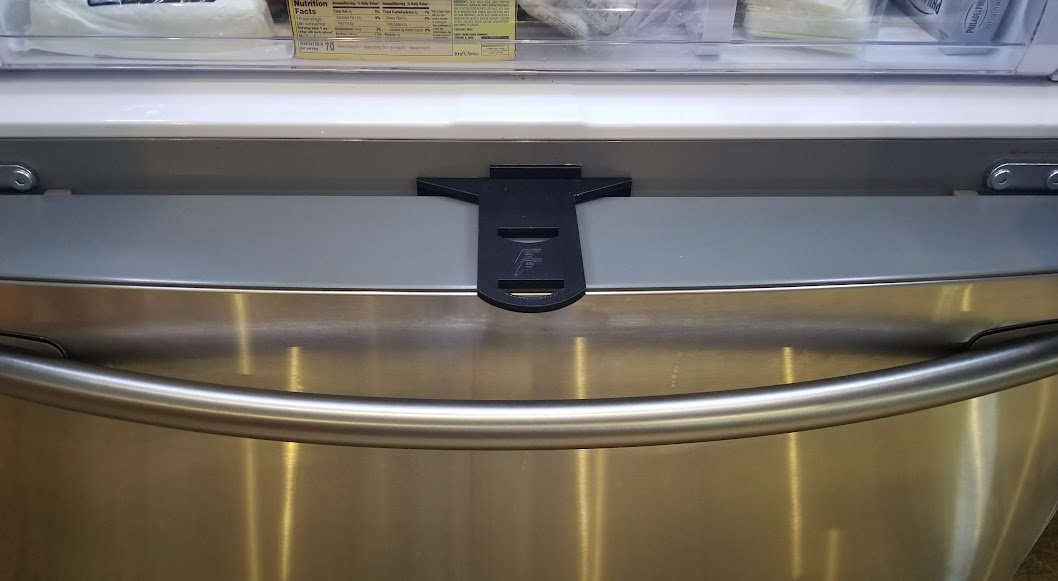 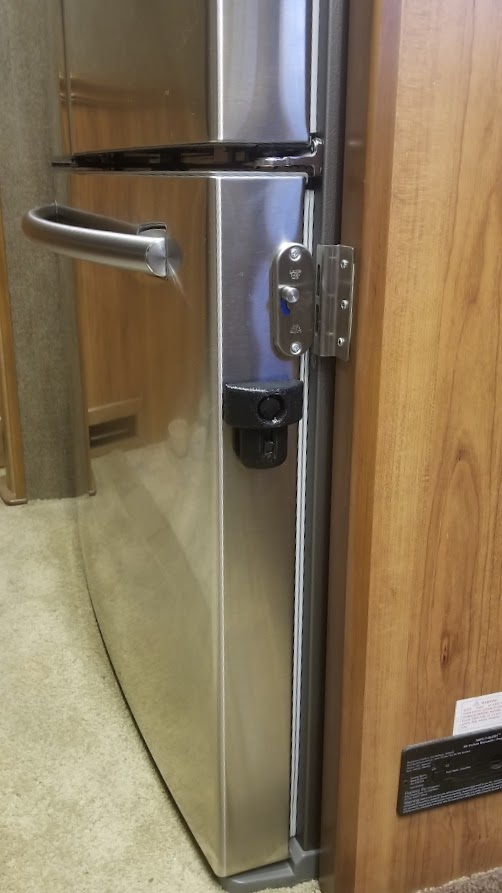 We have had our Fridge Fixer for several months and have a few thousand miles on it so far and it has performed flawlessly – we love it! It is a bit on the pricey side but in our opinion is well worth it. The current models produced by recubed solutions are manufactured on a 3D printer, so new models and design modifications can be quickly implemented.

If you have issues with misbehaving fridge latches it may be worth your while to check out the Fridge Fixer. It is available for many residential fridge models, but if yours is not listed on the recubed solutions website, contact them and in most cases they will be able to design one for you.