From Fort Pierce, we headed to one of our favorite destinations, St. Augustine. In addition to doing some sightseeing, one of our reasion for this visit was to take care of some personal business at the DMV in Green Cove Springs. 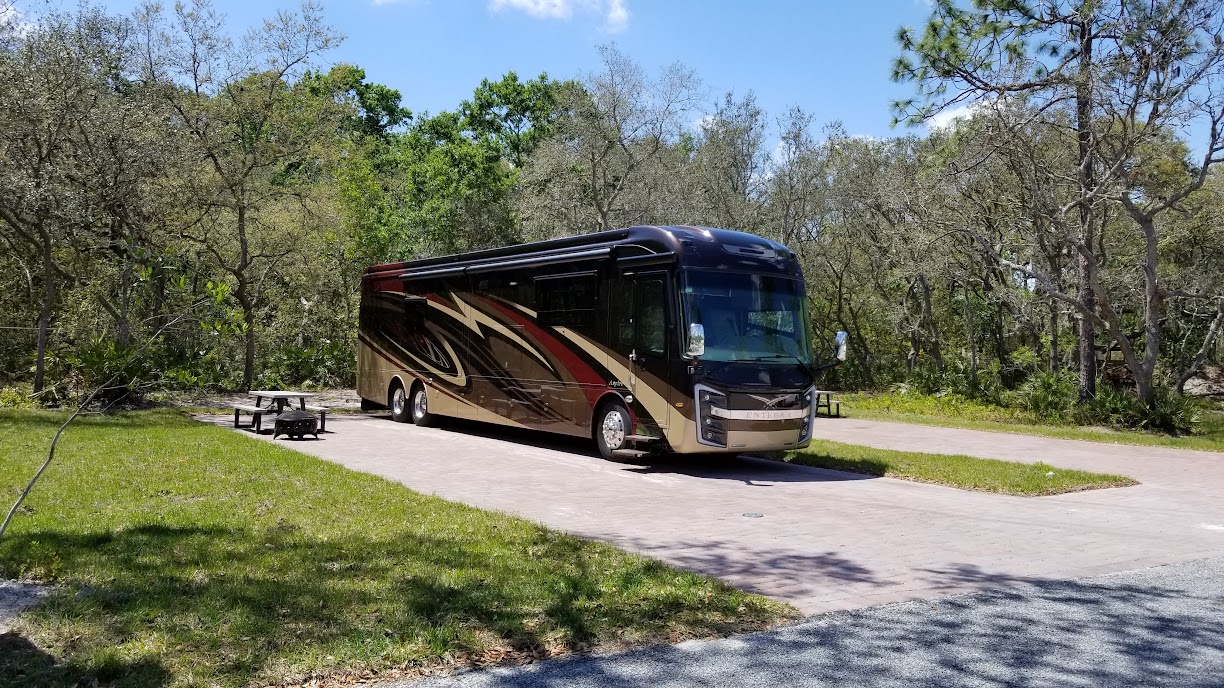 Instead of staying at Stage Coach RV Park like we have in the past, we decided (based on a recommendation from Rob’s aunt and uncle) to stay at Compass RV Park for an eight night stay (staying more than 7 nights would give us a larger discount off their fairly expensive rates). The primary advantage to this park vs. Stagecoach is its location just a few minutes from the heart of St. Augustine. Be aware if you go here, there are three sections to the park – Grove, Pond and Oasis. The Grove and Pond sections are older and the sites are fairly close together. Even though it cost a little bit more, we chose a site in the newer Oasis section. So glad we did – our site was fairly wide, with a paver lined driveway/patio and adequate spacing between us and our neighbors. 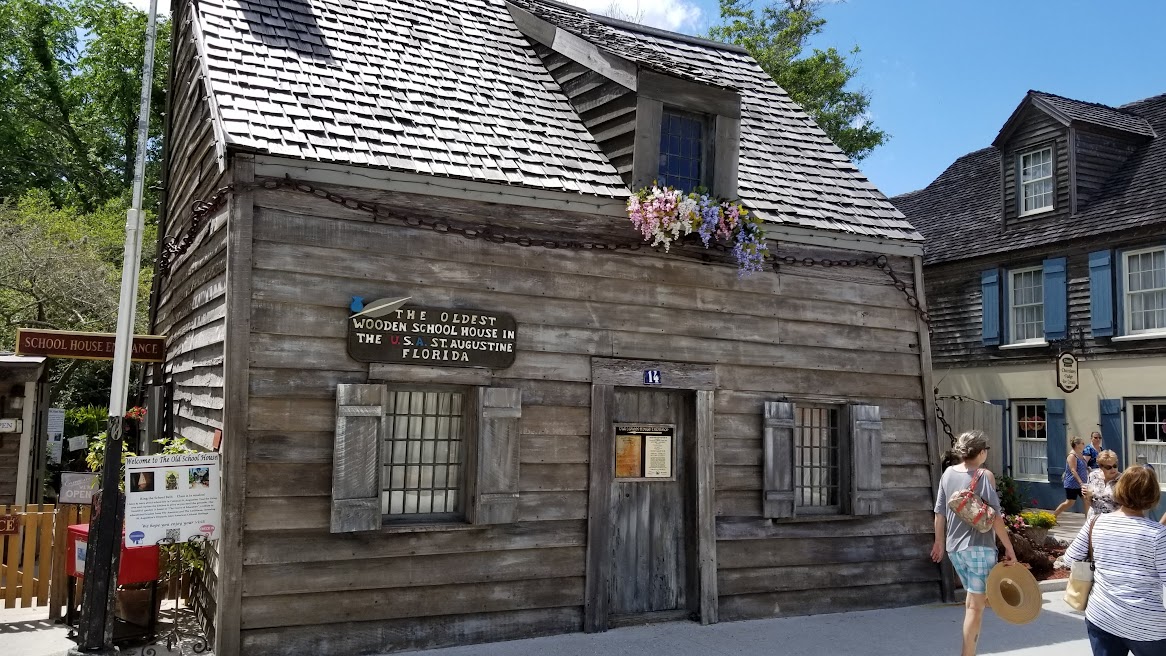 We’ve been to St. Augustine a number of times over the years even before we were RV’ing and started blogging so we’ve seen most of the major attractions. We’ve hopped on and off the St. Augustine Old Town Trolley Tour, strolled along St. George Street, visited the Castillo de San Marcos, tried to find eternal youth (darn, no luck) at Ponce de Leon’s Fountain of Youth Archaeological Park, admired the architectural heritage of Flagler College, were amazed by the 19th century antiquities found at the eclectic Lightner Museum and took a ferry to the Fort Matanzas National Monument (which has been shut down until further notice due to damage to the ferry docks caused by the wrath of Irma). On this visit, would we find something else to do?

The weather was cloudy and overcast with possible showers in the forecast, so an indoor activity would be best, certainly not the best day to be sightseeing outside. Let’s tour the St. Augustine Distillery! Sure it was kind of early in the day to be imbibing but it’s five o’clock somewhere, right?

Tours are free and are given every 30 minutes on the hour, starting at 10:30 a.m.. The last tour starts at 5:00 p.m. every day except on Saturdays when the last tour is at 5:30 p.m. Be aware that in addition to the distillery, there is a restaurant, the Ice Plant Bar located upstairs, where lunch, brunch and dinner are served. Although we didn’t have an opportunity to eat there, it has received excellent reviews not only for the farm-to-table cuisine and their adult beverages but for the decor as well. 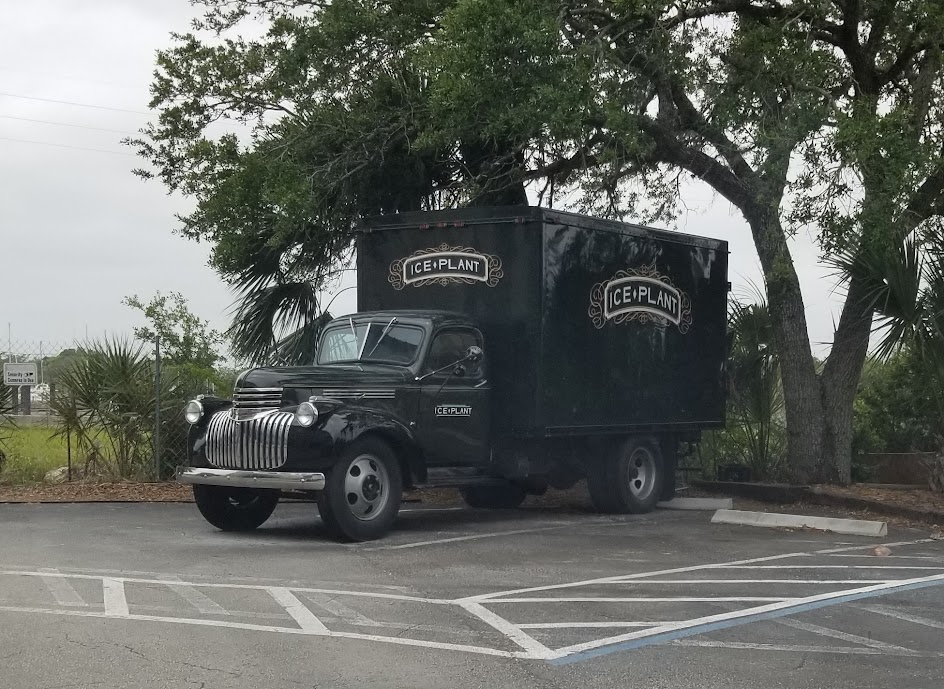 Located in a historically renovated 1905 FP&L (Florida Power & Light) Ice Plant complex , this distillery which has only been open since 2014 produces “small-batch, super premium, award winning spirits, bourbon, gin, vodka and rum, with age-old distilling techniques and locally farmed ingredients.” Interesting to read about the painstaking steps during the renovation the owners took to bring “history back to life by presenting a genuine experience to tourists suffused with a local’s sense of pride.” 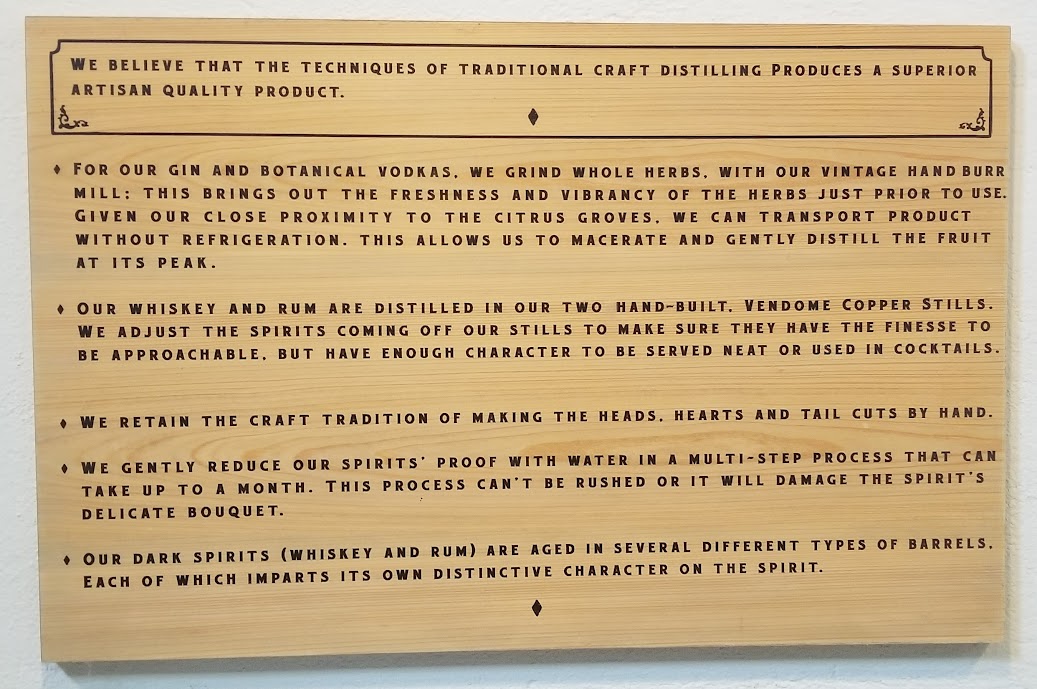 When we arrived, the next tour didn’t start for about 20 minutes so we killed time perusing the displays and exhibits in the visitor area which highlights the history of the building, the distillery process as well as the ice industry in general. Between the 1920’s and 1950’s and before refrigerators and freezers became a standard fixture in every American home, the plant’s ice making capacity was 125 tons, producing 325-pound blocks of pure, clean ice that were then transferred via overhead bridge crane to rail cars, boats and trucks out back – or broken up into smaller quantities and sold to local residents.

The refrigeration system used by the ice plant was ammonia based and is the same basic technology used by modern propane fired RV refrigerators. The blue contraption in the photo below is a circa 1940’s compressor for ammonia refrigerant. 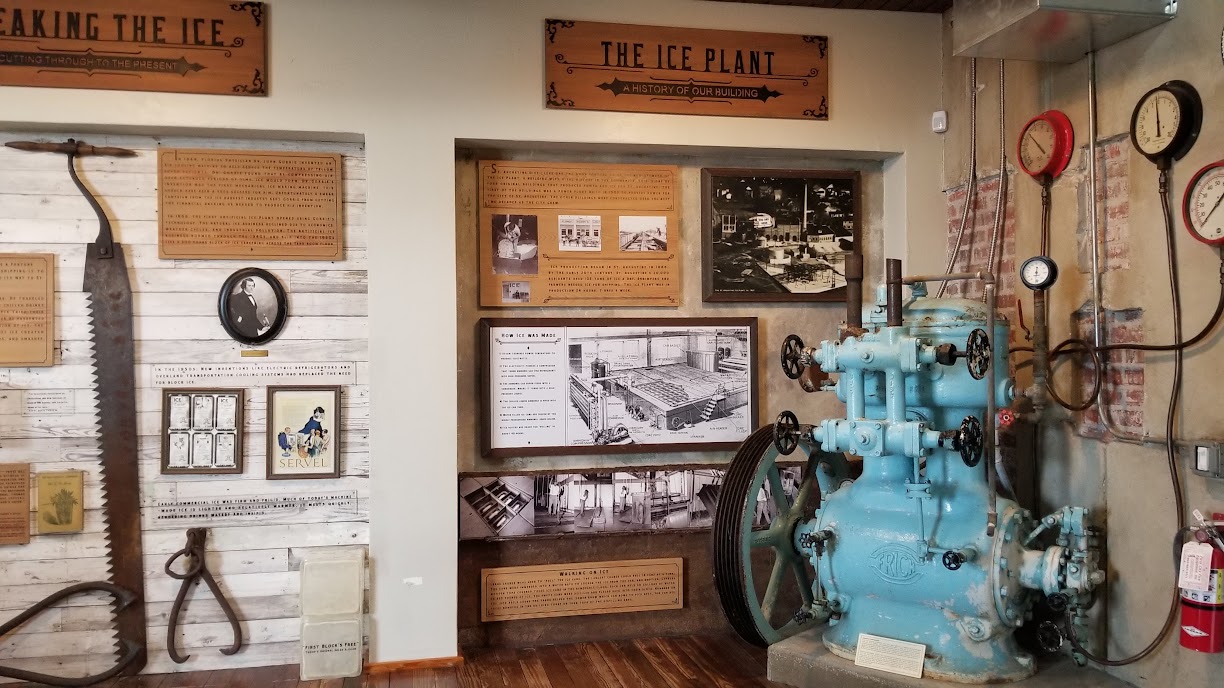 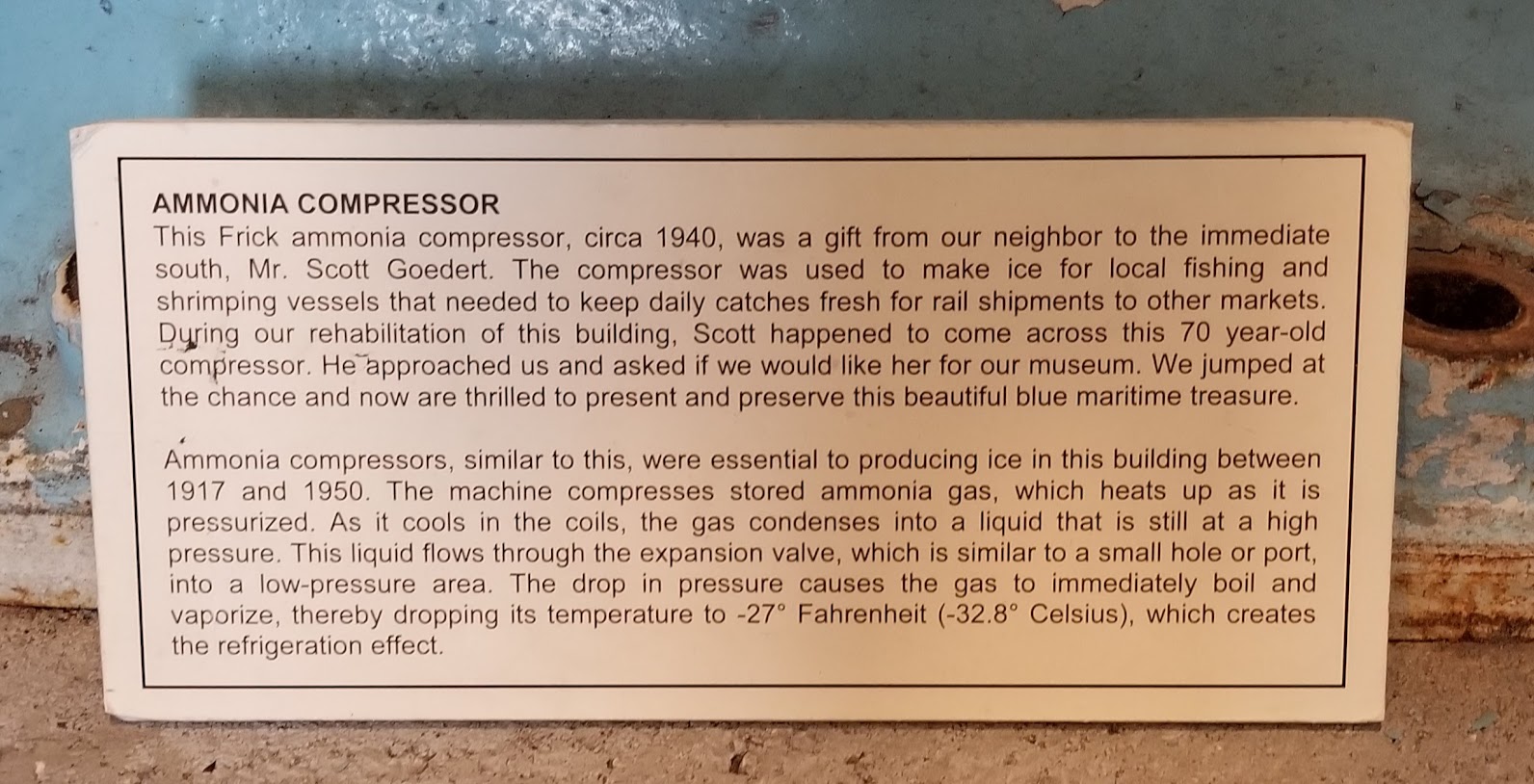 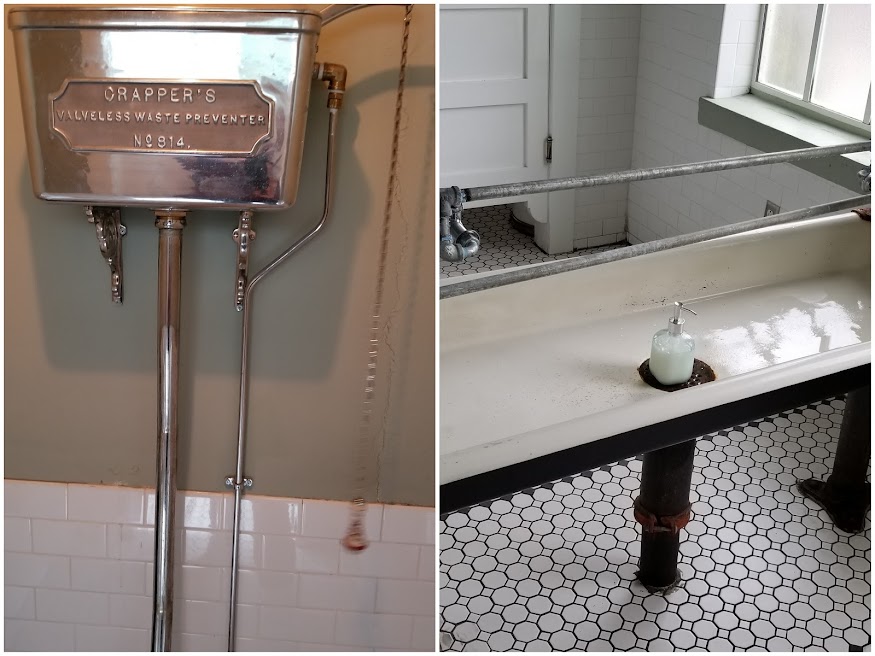 Not only was the tour interesting and informative but it was also a ton of fun, thanks to our tour guide, Laura. What a hoot she was! To see here in action and learn a bit about their process, check out this You Tube Video. 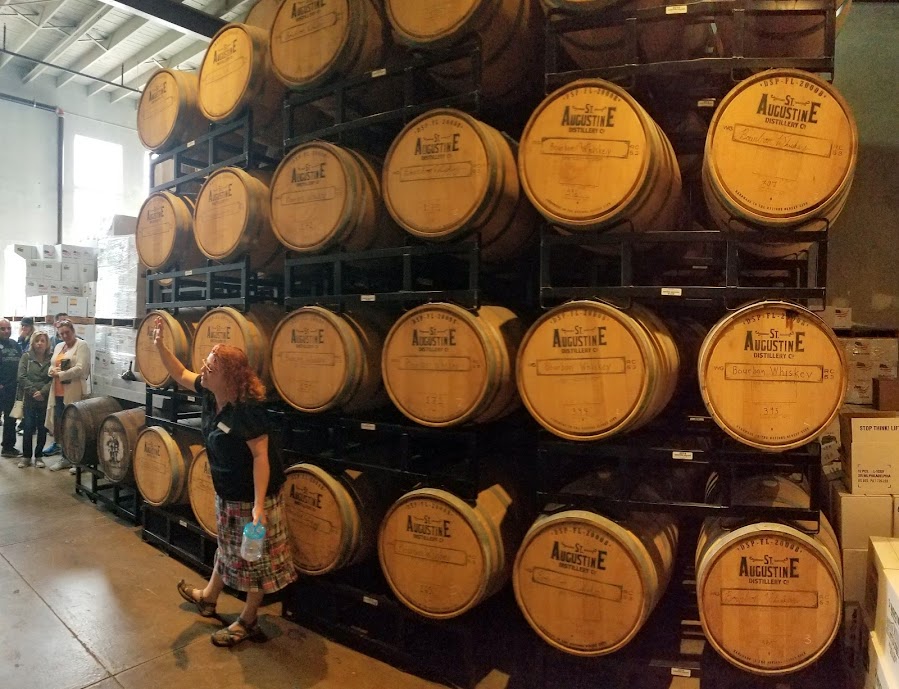 Besides distilling spirits, they also produce very tasty syrups – Strong Tonic Syrup, Old Fashioned Syrup, Tiki Mix and Florida Mule Mix. At the end of the tour, everyone had a chance to sample each of these cocktails made with their award winning spirits. 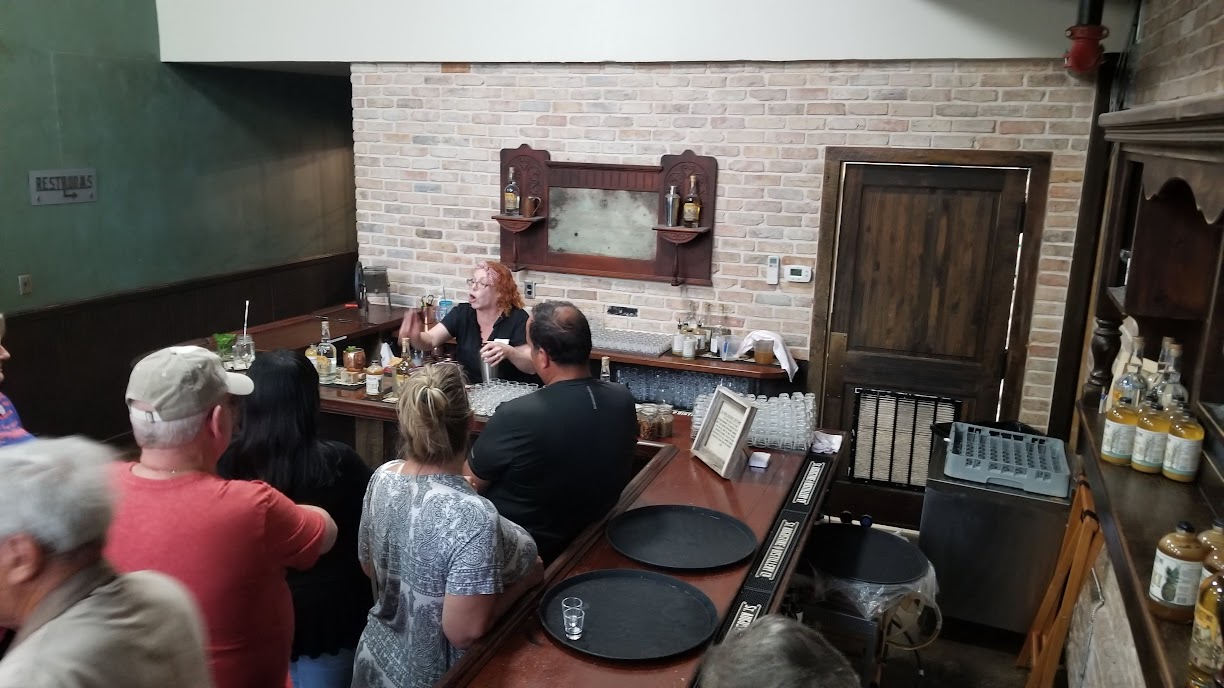 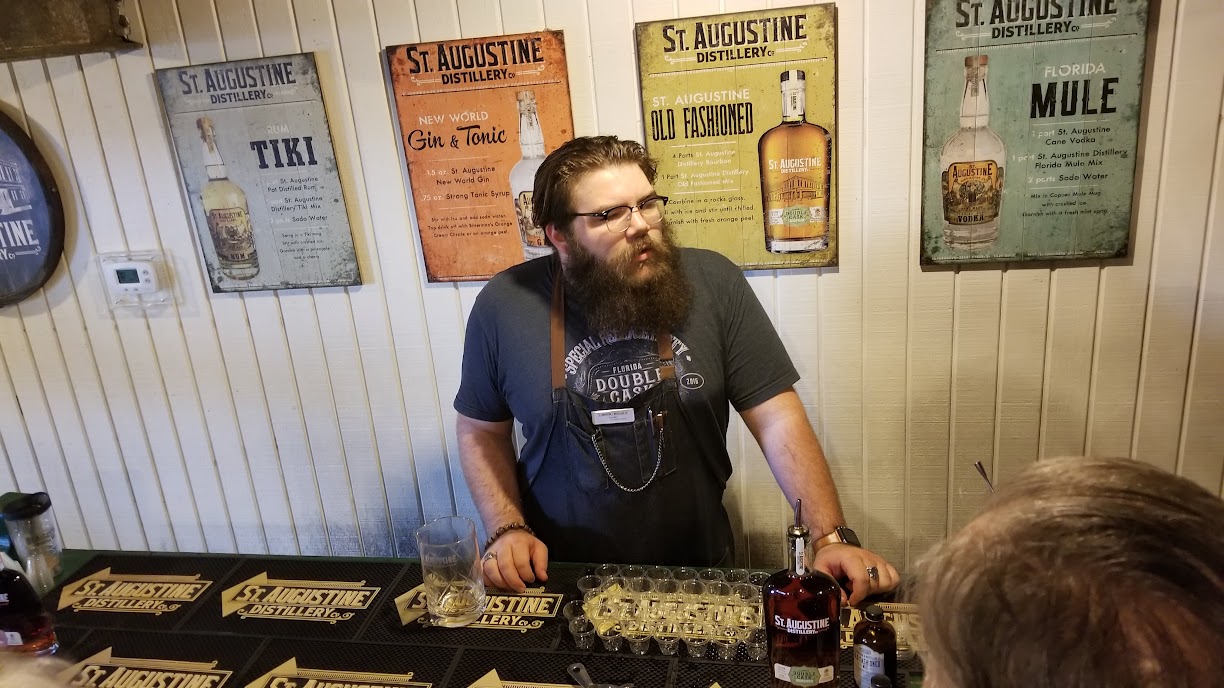 After sampling all of their mixed drinks, we were herded into the gift shop where we were able to sample (by request only) their 93.8 proof Florida Double Cask Bourbon and their 102 proof Port Bourbon which has won a Triple Gold Medal in the 2016 MicroLiquor Awards. To produce this bourbon, they take their award-winning Florida Double Cask Bourbon and finish it in port wine barrels from their neighbors at San Sebastian Winery. 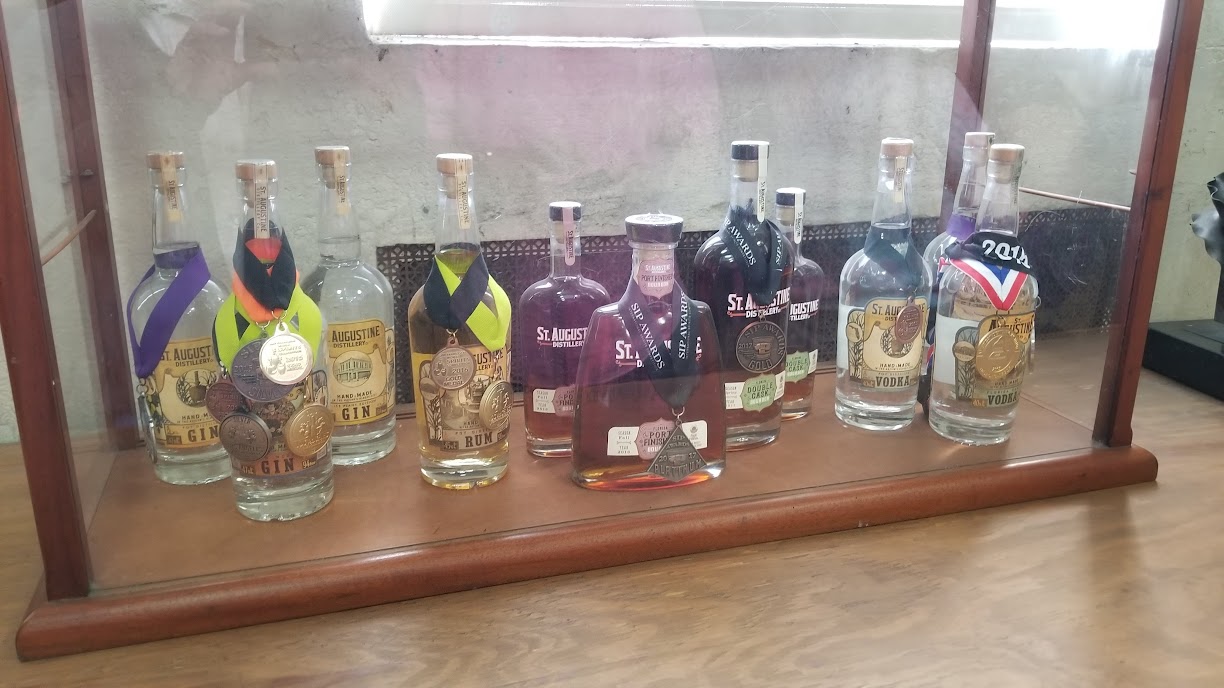 No surprise that our “free” tour didn’t exactly end up being “free”. After all, we had to buy something to support the local business! If you are ever in St. A, even if you don’t imbibe, we highly recommend a visit here!

When we have been to St. A in the past, it’s usually been very crowded. On this visit, although it was busy, it was much less congested, so strolling and even driving along the streets was more enjoyable. 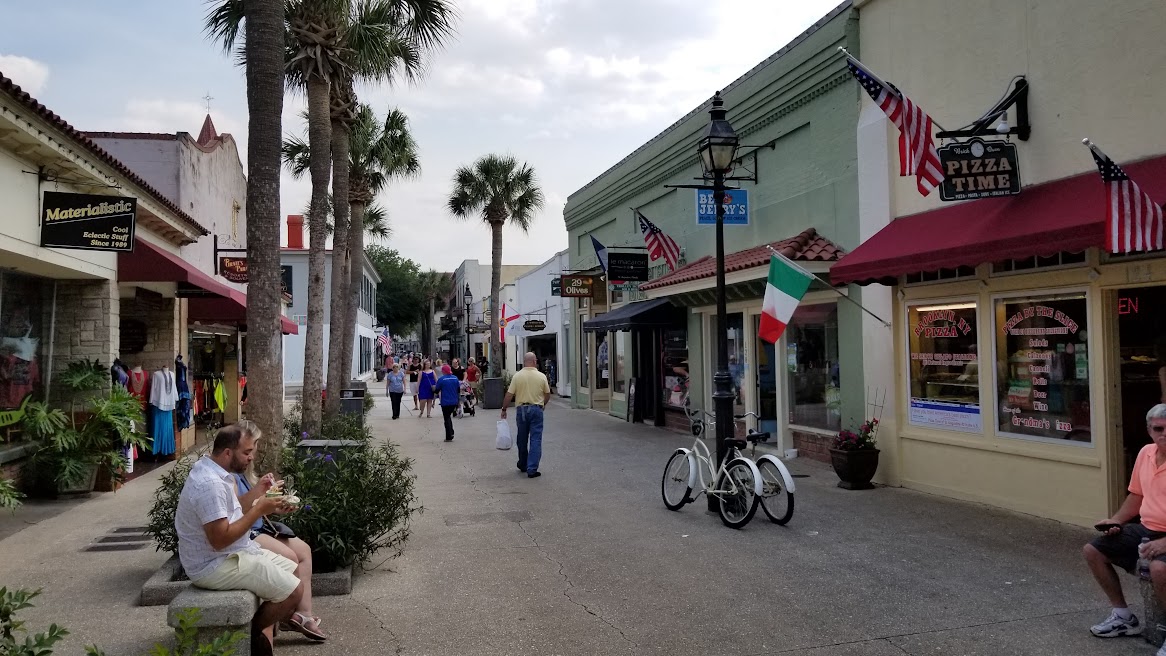 Besides imbibing in spirits, we did our share of dining during our stay! A visit to our favorite restaurant, The Raintree was a must do. Unless you have reservations, it’s best to arrive here shortly after they open at 5:00 p.m. 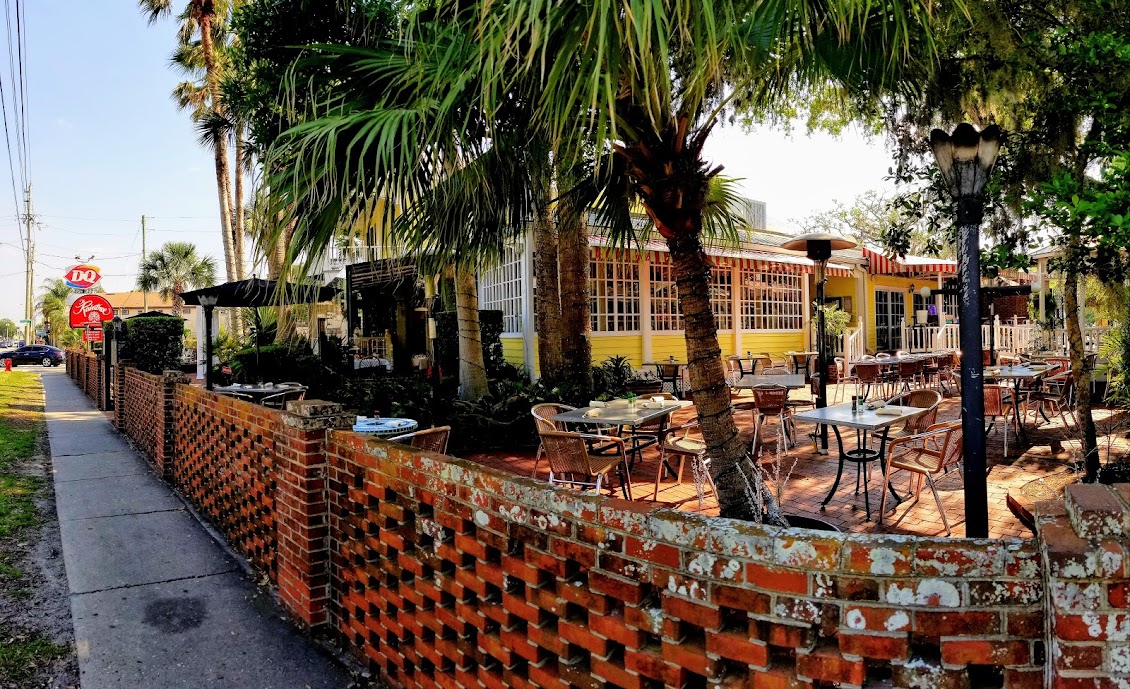 On this visit it was their special of the day – Pesto Crusted Salmon ($25) that enticed me and Beef Wellington ($29) for Rob. And we even split a dessert – the Warm Chocolate Dome Cake ($7.99) with Vanilla Ice Cream & Macadamia Nut Brittle. Oh, my everything was so good. Yes, it is pricey but trust me, it is so worth it. Should you visit, note that they do have burgers, sandwiches and other similar fare on their dinner menu, so there are significantly less costly options available. 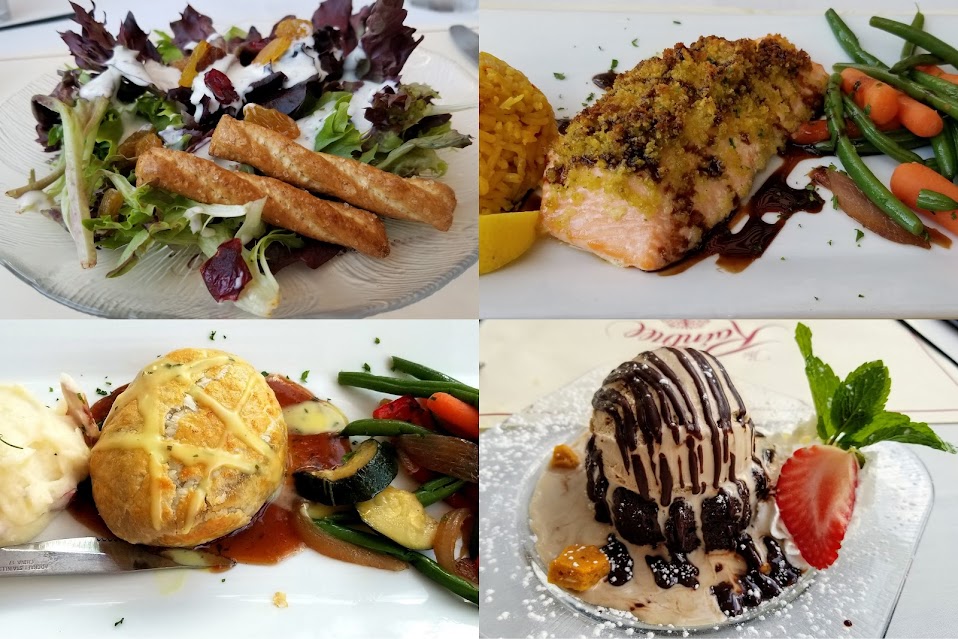 One day we drove up A1A north along the coast. Although we couldn’t see much of the beaches from the road, there were frequent beach access stops. 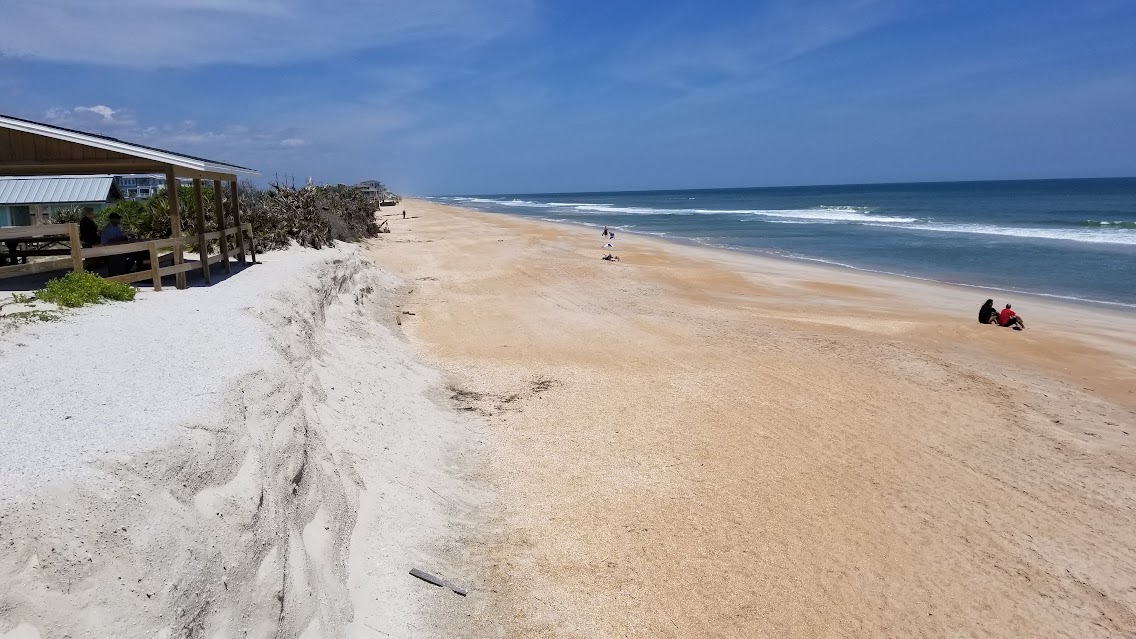 Having seen good reviews for a place on the Tolomoto River, we decided to stop at Aunt Kate’s restaurant for lunch.

As we sat out on their deck overlooking the river, we enjoyed a half order (5 lbs) of steamed oysters and split a blackened Mahi sandwich ($14.99). We both love oysters, usually having them fried, but had never had them steamed before. These were local oysters and came in “clumps”, so it took some work eating them but they were delicious as was the sandwich! 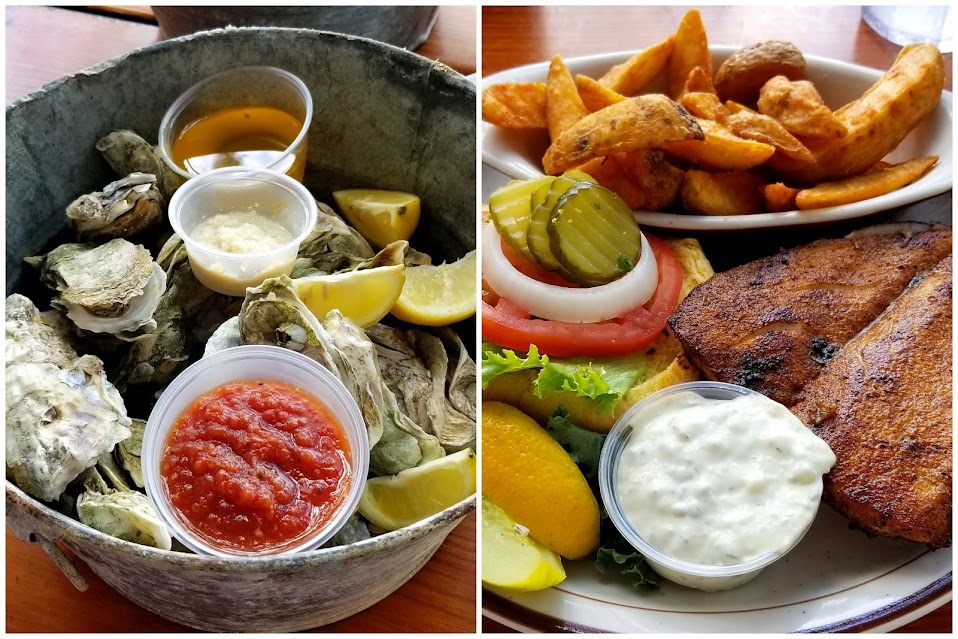 In our usual hunt for a decent breakfast, one day we went to the Metro Diner for brunch. I seem to be into Crab Cake Benedicts these days so that is what I ordered. While Rob had his usual Corned Beef Hash ($8.99). Everything was excellent! The Metro Diner is a chain operating in 11 states nationwide. The prices here were better than Georgie’s (see below) and the food was just as good if not superior, this could be our new favorite for breakfast in St. A. 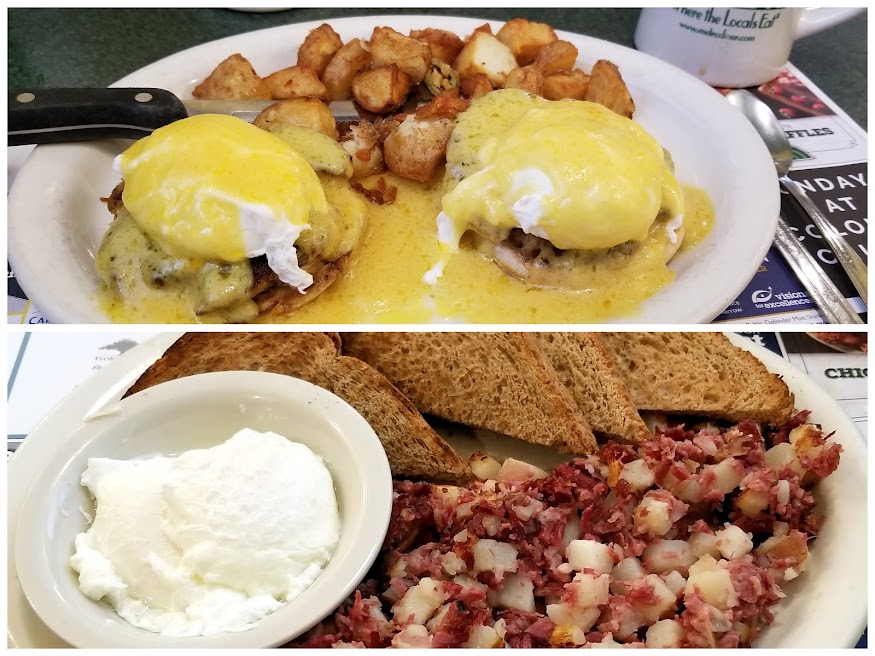 For a taste of 1960s nostalgia, another morning we visited Georgie’s Diner. Guess it’s obvious that we liked this restaurant because we had been here twice in 2013 and again in 2014. Standard breakfast for me – 2 eggs, home fries and toast ($7.50) and the usual Corned Beef Hash ($10.95) for Rob. Hmmm, doesn’t it make you wonder how many pounds of CBH he eats in a year? 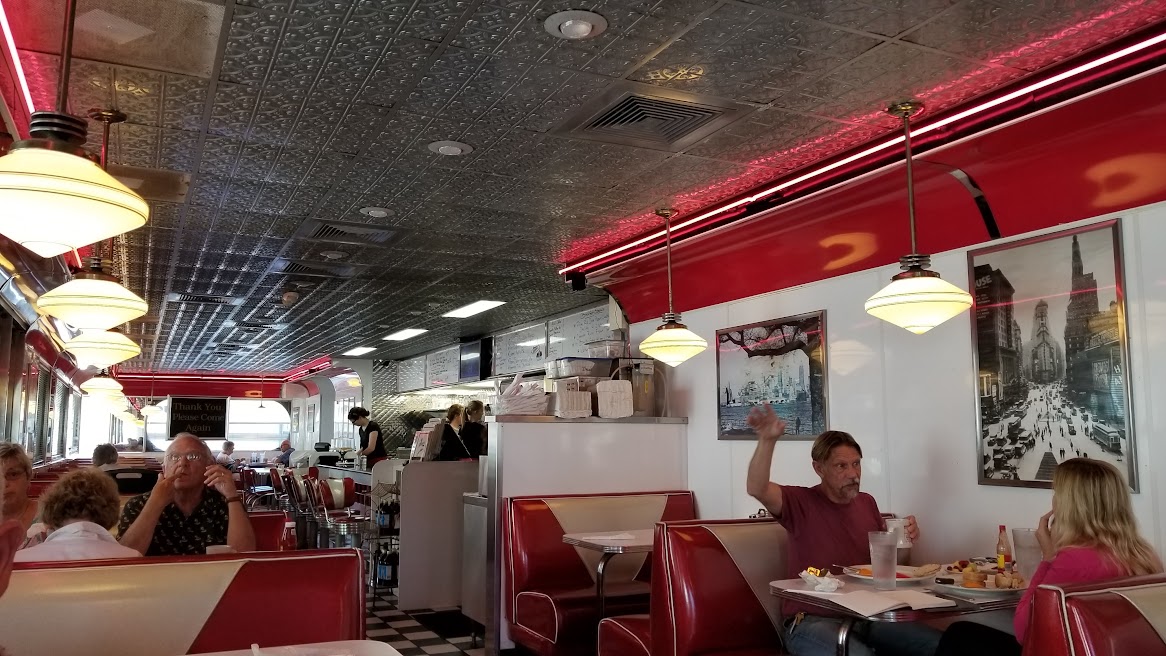 Our sightseeing wasn’t over yet, we did manage to “step up” our game and find one more attraction to visit, can you guess what it was? Find out in our next post!