The brilliant hues of the leaves turning. Warm, comfortable days, yet chilly nights. No snow yet but the thoughts of snowflakes began to dance in our heads. 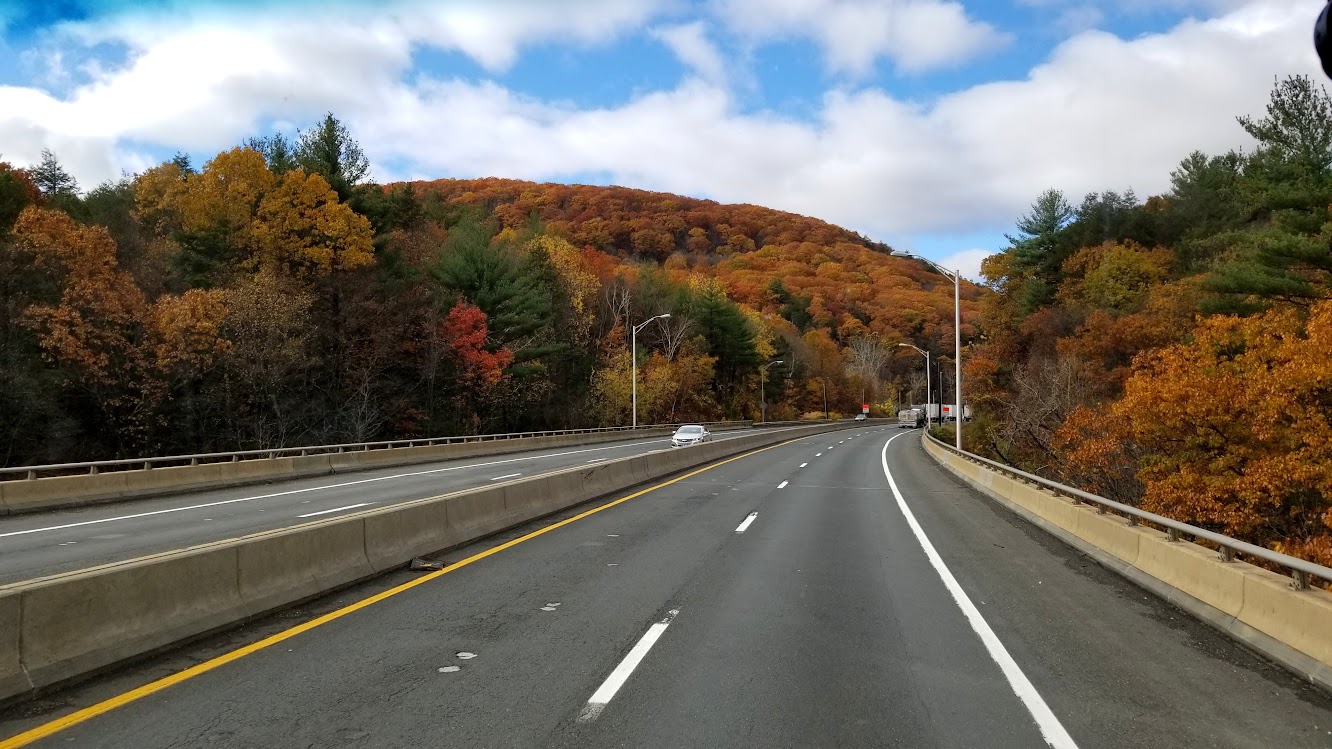 Ah, yes, the time for us snowbirds to fly south was rapidly approaching. Very unusual for us to still be in New England this late in October, but now that our coach is out of warranty, the date of our departure is no longer driven by a September service appointment at Entegra in Indiana.

Although we thoroughly enjoyed our summer, despite feeling exhausted from our summer plethora of projects, our nomadic itch was kicking in, after all we had been in one place for almost six months. Definitely time for us to be on the move again.

In prep for our departure, any remaining boat projects were halted. Everything brought on board the boat (including us and Sparky) for the summer was moved back to the coach. Freezable items were packed in boxes and moved to storage. Engines and water systems were winterized, the dinghy hauled, deflated and brought on board, the enclosure curtains were taken down and stored below. 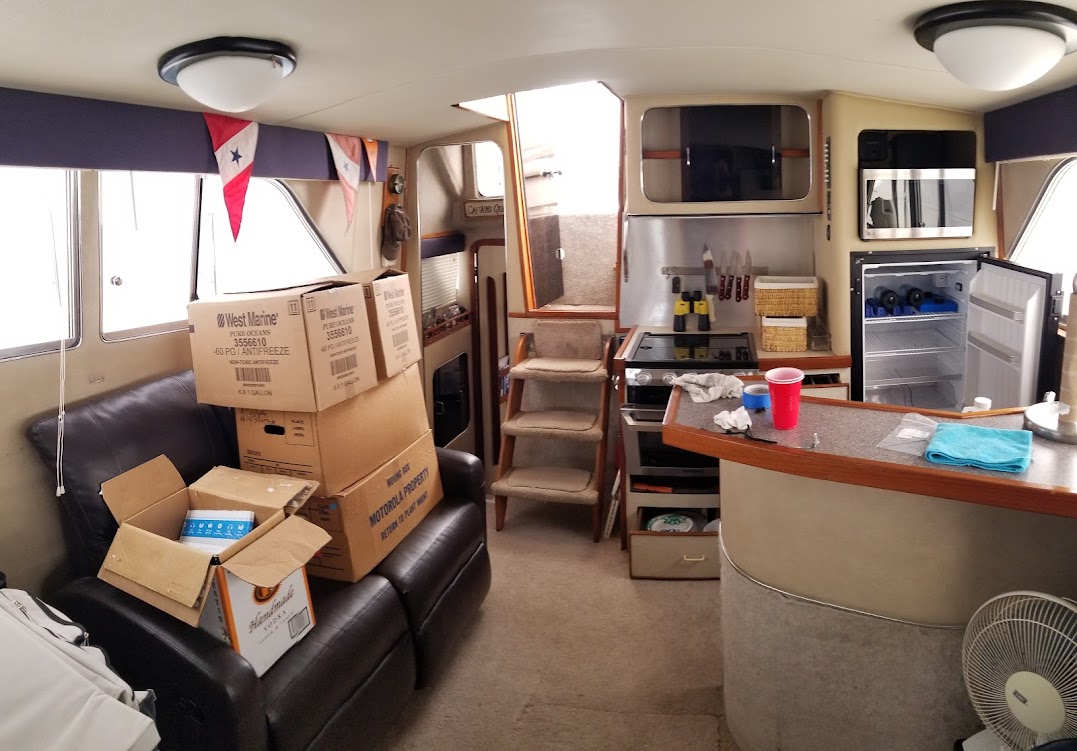 Within a few days, Quantum Leap was ready for her haul date on October 15th. 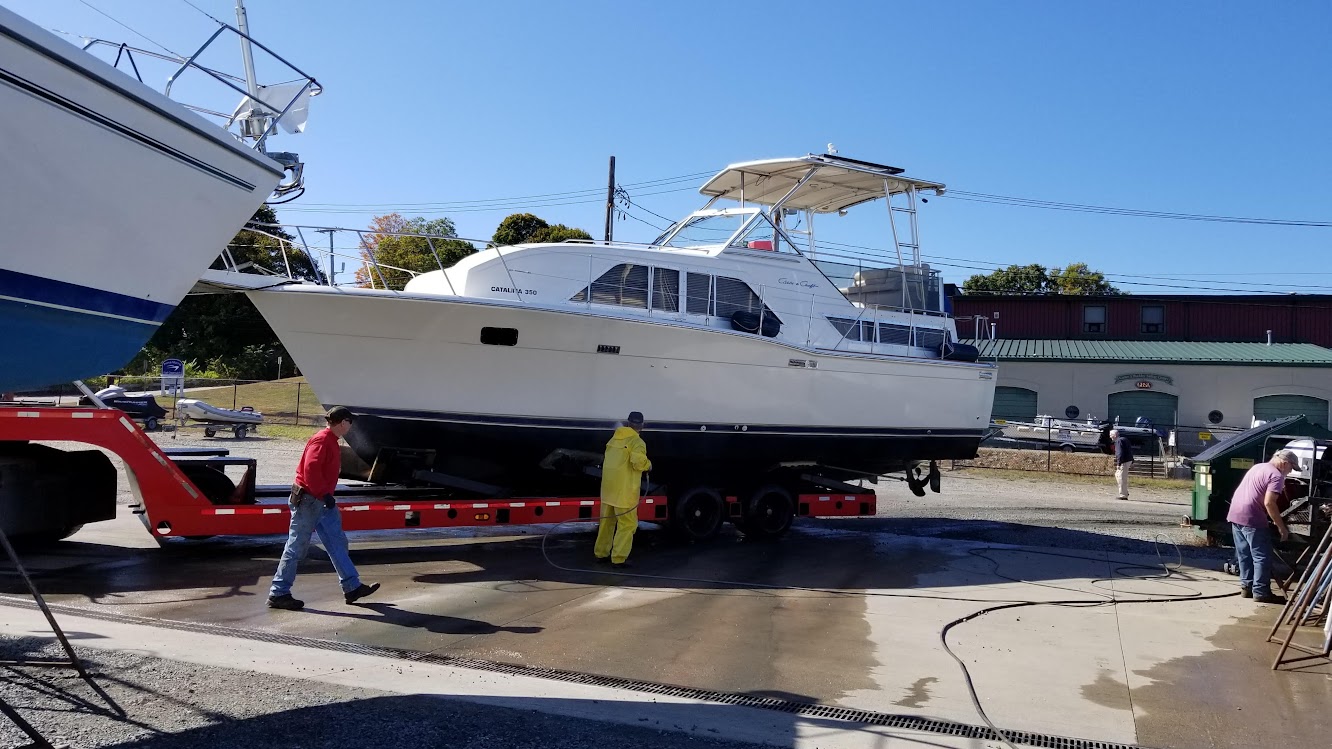 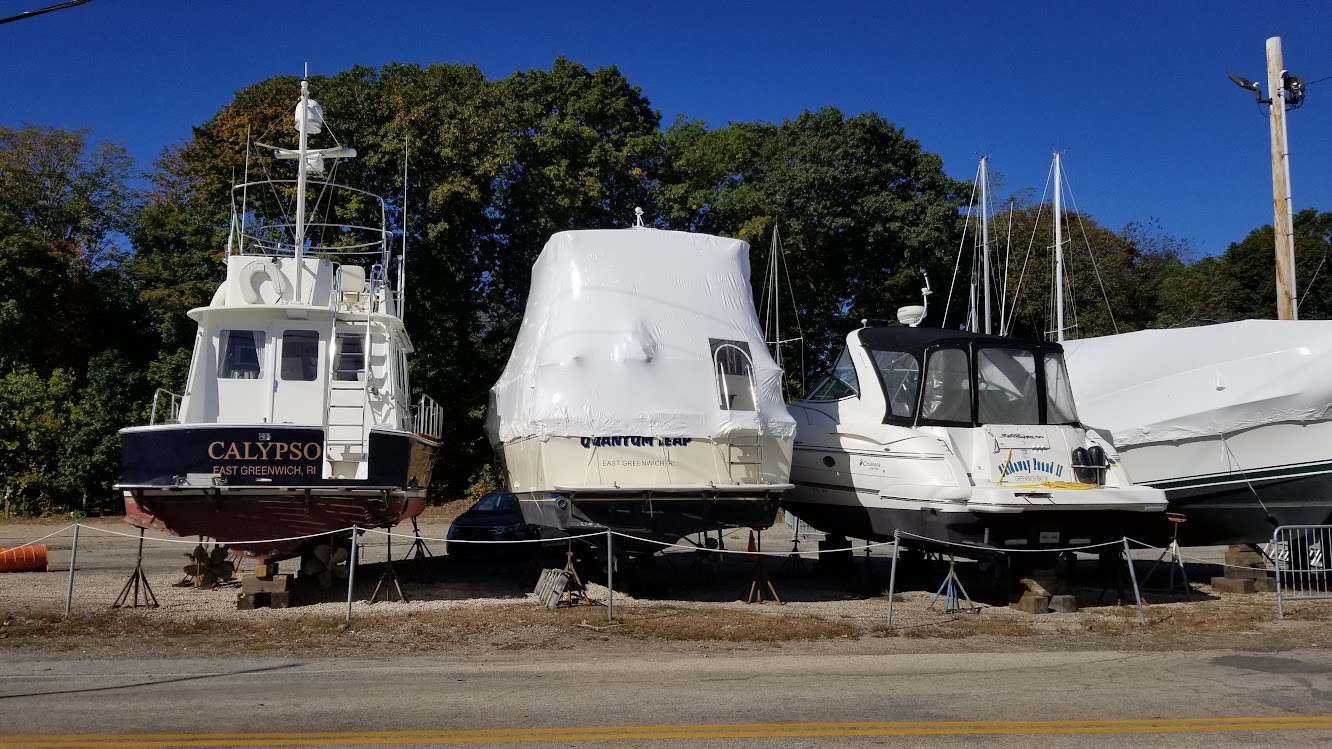 But once we were moved back on board the coach, there was no time to rest. Sure our boat to-do list had been put aside, but it was quickly replaced with our coach to-do list which included the usual annual purge of unused items from the basement and the interior cabinets, a lot of reorganization, changing the oil and filters on the coach and replacing the seat foam on the passenger helm chair.

Replacing the foam? Huh? Why were we doing that you are probably wondering? Well, way back one of the Entegra executives had made the decision that customers would enjoy a softer cushion. Bad decision! Apparently this executive had not spent hours sitting in the helm seats which over time deteriorated to the point where the springs of the seat could be felt. This was the case with both our 2013 and 2017 coaches. Entegra would replace the foam but not under warranty so having this done either at Entegra or someplace else would most likely cost over $1000 per chair, not an expense we could justify. But fortunately during one of our trips to Indiana for service, we had met other owners, Ray (and Linda), who planned on replacing the foam themselves. Based on info received from Ray, Rob contacted Lisa Bauer at Flexsteel, providing her with the codes found on the top part of the seat tag so she could send the correct replacement assembly. She would ship the foam to a Flexsteel service person in Leesburg, IN about an hour’s drive from Entegra. We picked it up on our last visit to Indiana in September of 2018. 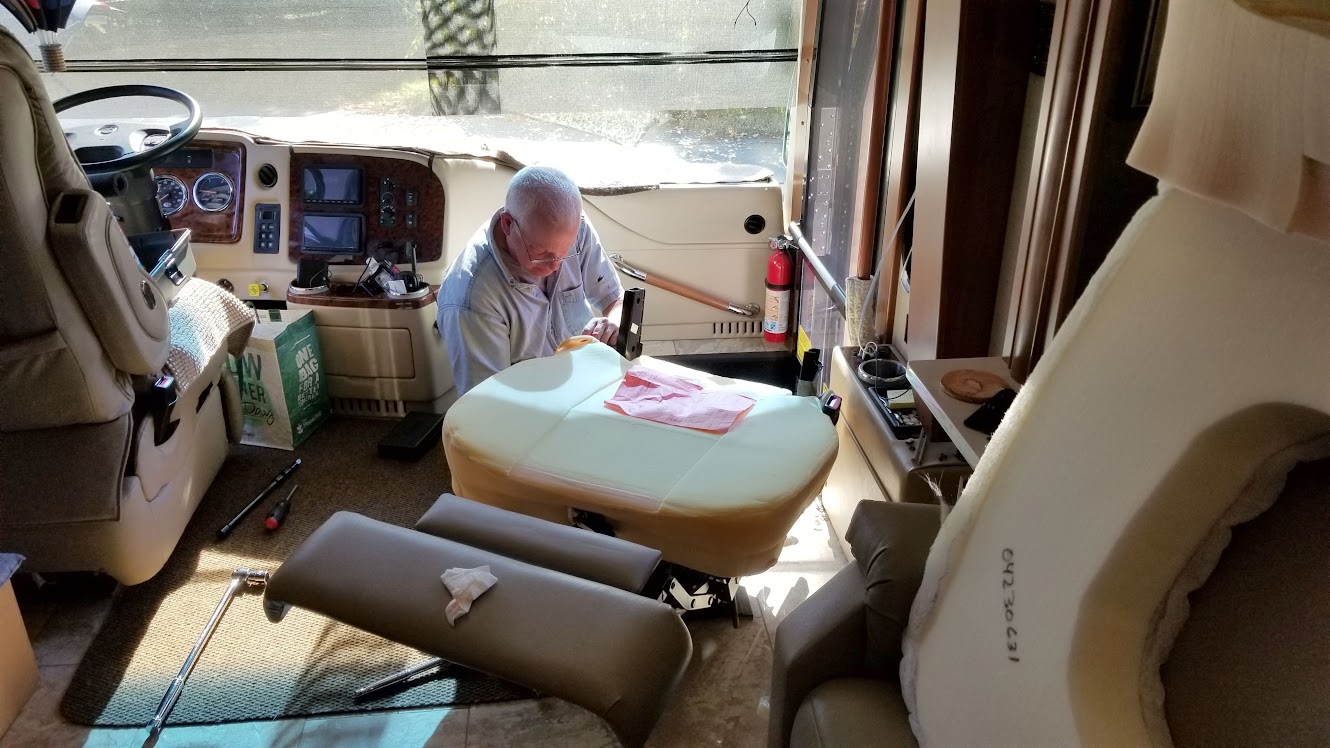 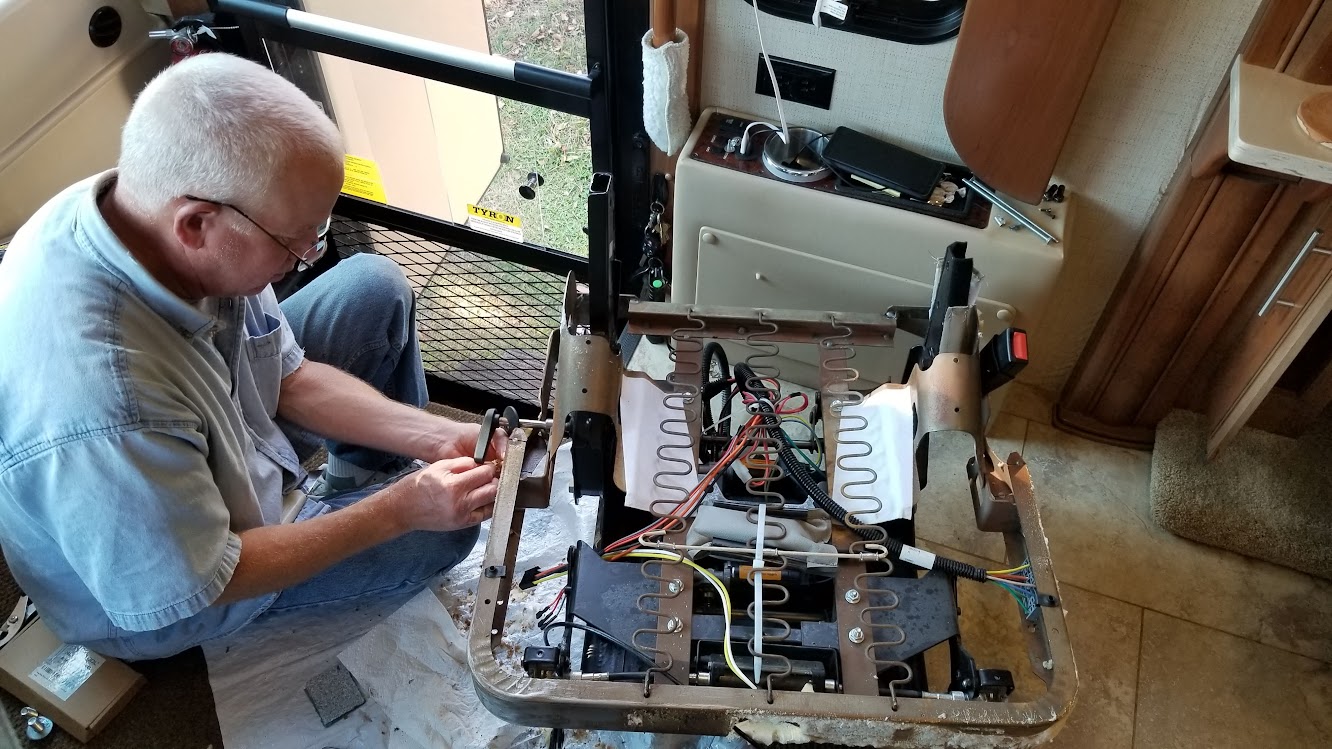 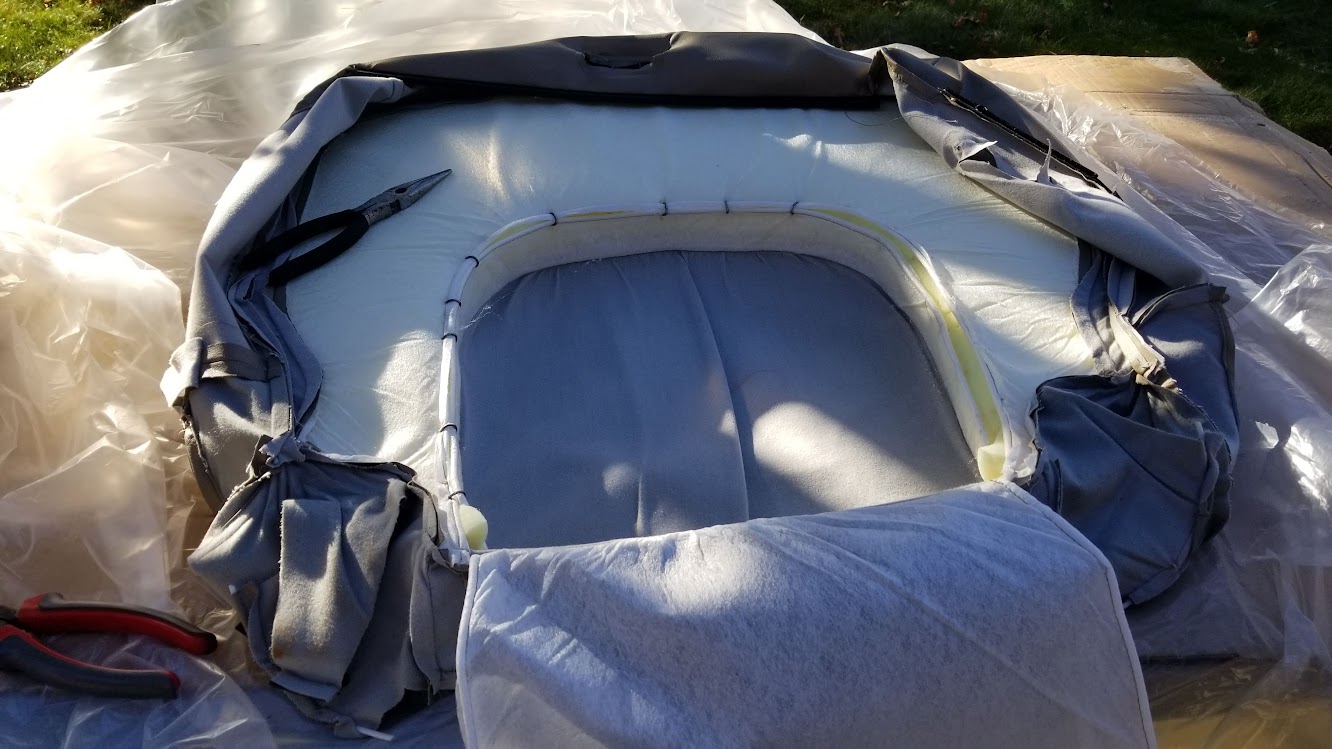 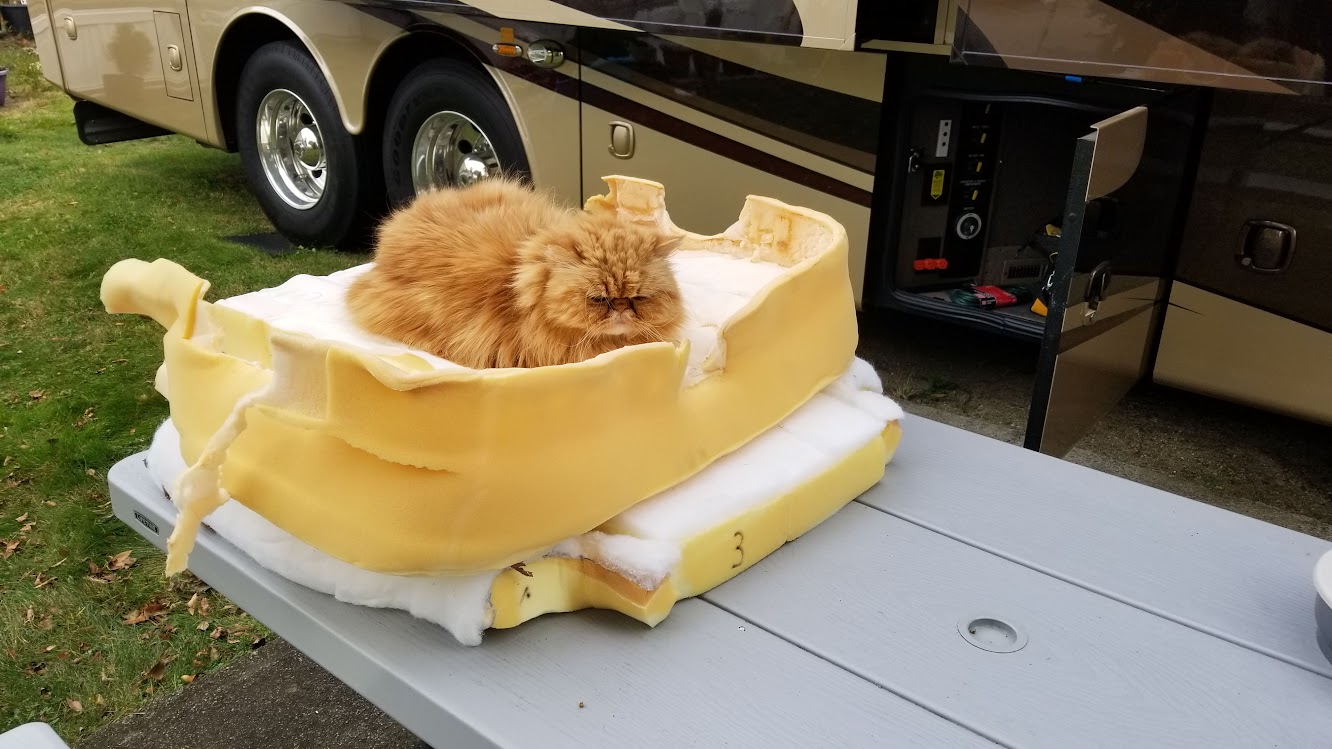 It wasn’t until the end of this summer that Rob found the time (or the inclination) to work on the passenger chair. Tough job but mission accomplished!  Much firmer and much more comfortable seating now. Due to time limitations, it was decided that installing the new foam on the driver’s chair would have to wait.

Finally it was time! On Monday, October 28th, we headed out, first stopping in Albany, NY to visit Rob’s 90 year old father at his retirement community, Avila. 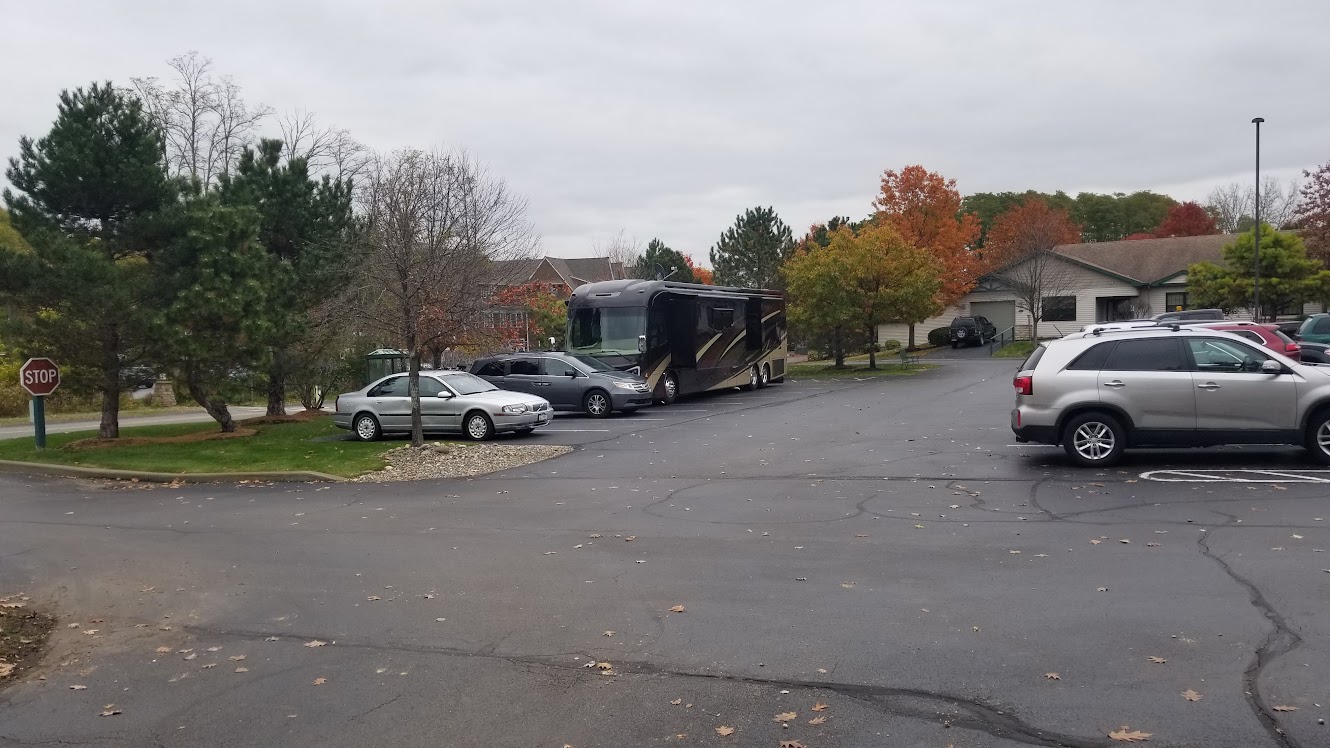 It was a special visit since Rob’s brother, Jeff who lives in Chicago was in town on business as well. Dad was thrilled – it was the first time since Rob’s mother died back in 2013 that his three sons were together once again. 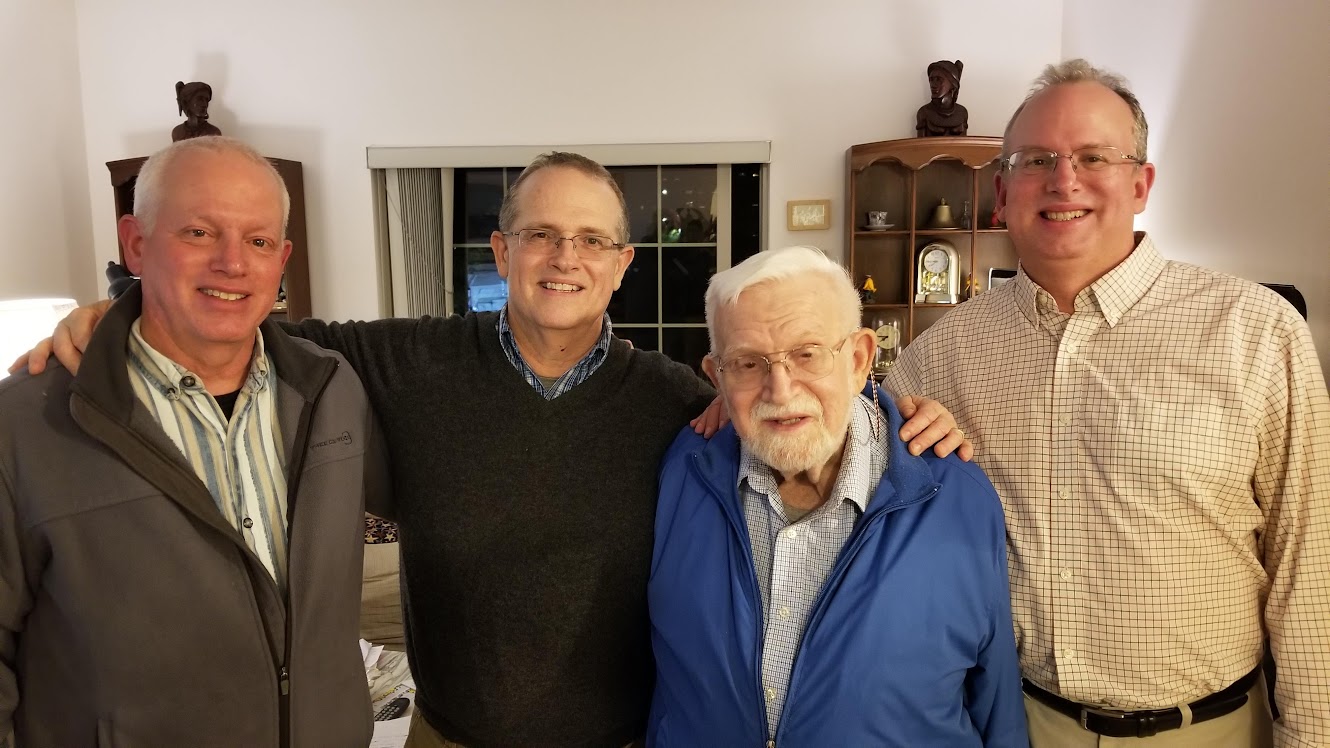 After two nights it was time to move on. Our next stop was at a resort we had been to before, Twin Grove RV Resort in Pine Grove, PA for a two night stay. 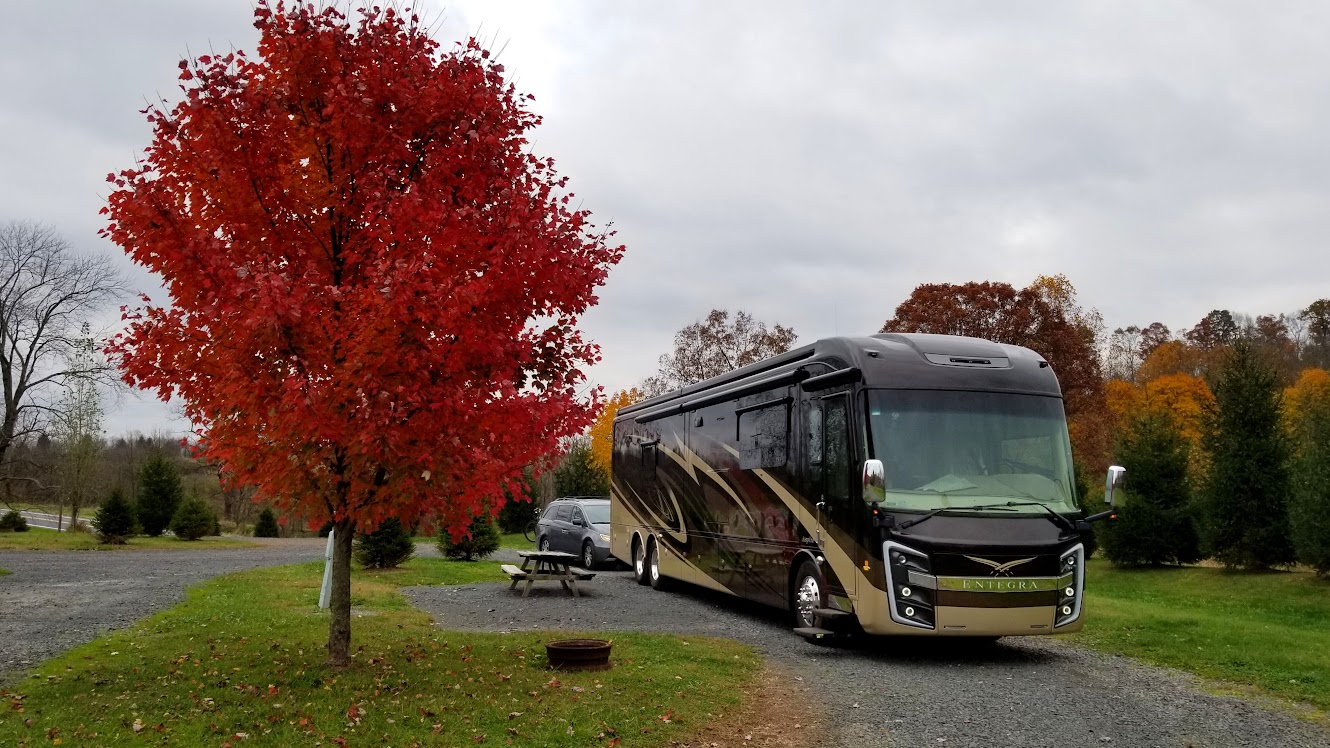 Originally we only planned to stay there one night but with the threat of bad weather (high winds and heavy rain) in the forecast we decided to stay an additional night. Sounded good in theory but what we thought was just supposed to be a rain storm turned into a tornado watch. Oh joy! Thankfully that watch never progressed into a warning, it was just rain, wind and a little thunder. Whew!

Next, it was a fun stop at Wilderness Run Vineyards in Spotsylvania, VA, a Harvest Hosts location. 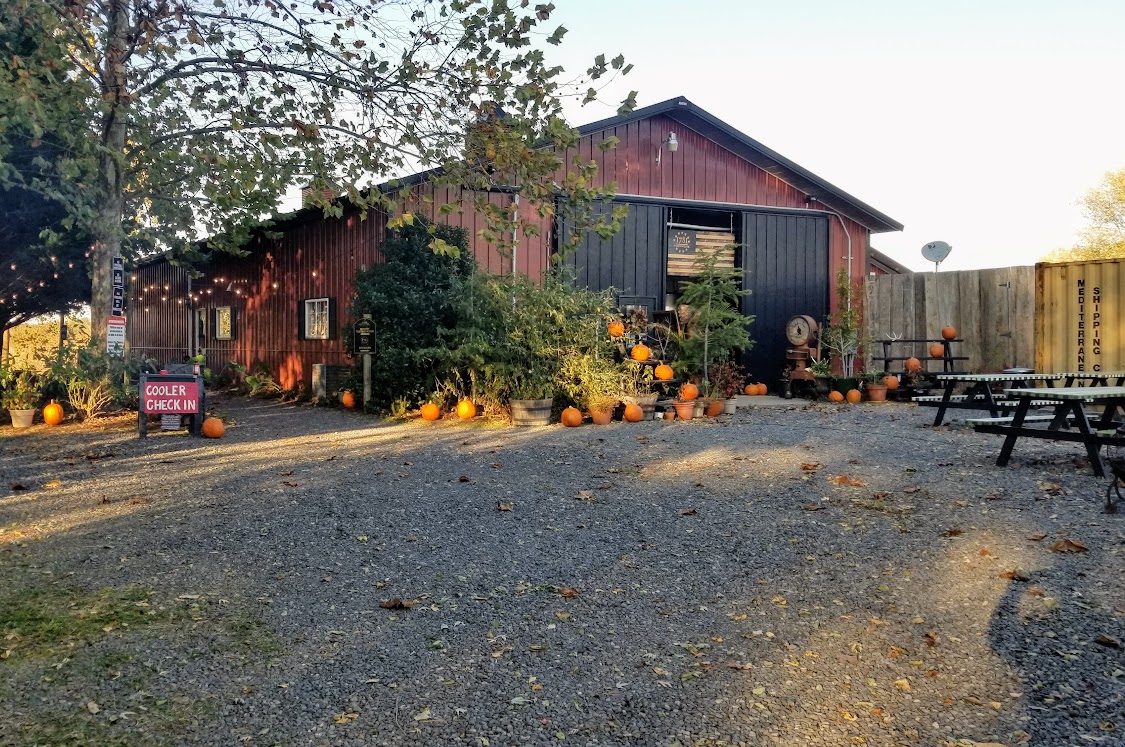 We boondocked at the top of a hill in the vineyards. 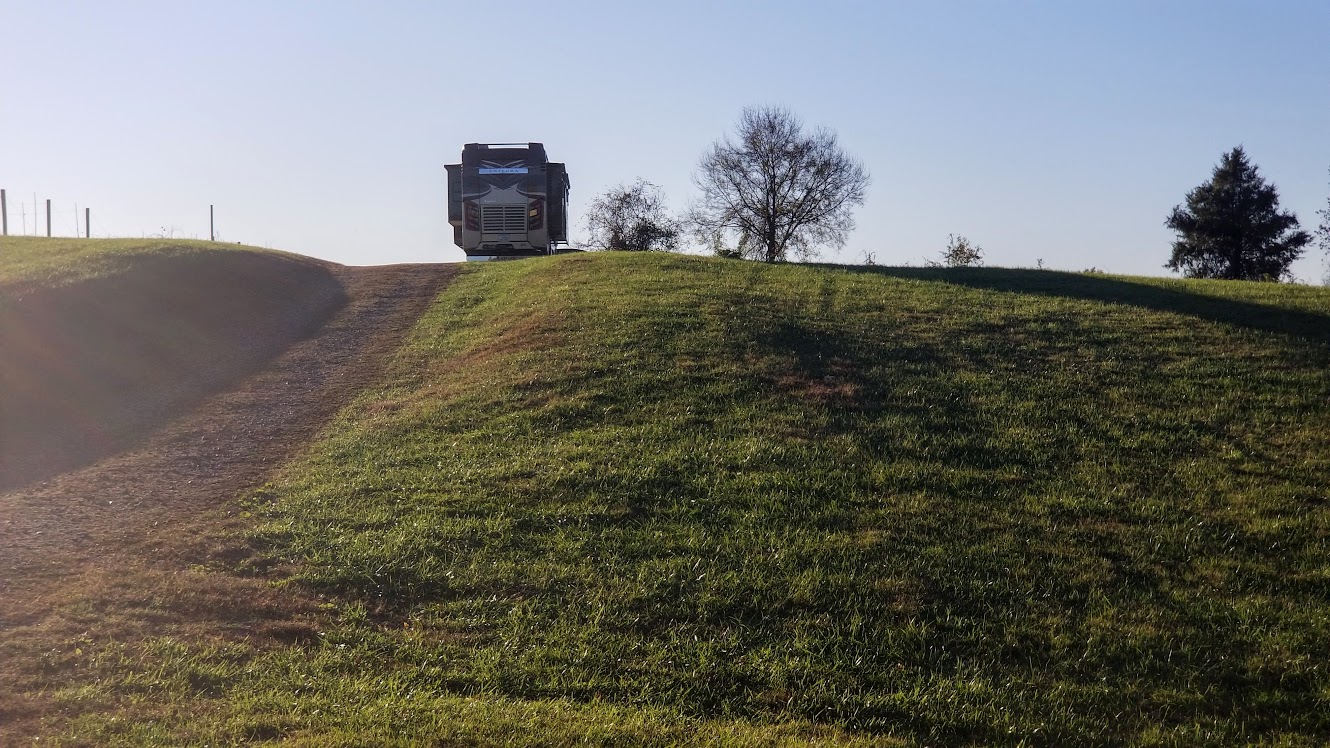 Once a dairy farm, the land has been transformed by the family into a vineyard and the 1781 Brewing Company. Once settled, we strolled down the hill to explore what they had to offer. Besides beer and wine, there were horses, goats, turkeys and chickens to meet. In addition to the animals, they have a number of music events, food truck events and stretch and sip yoga! A cigar bar was also under construction and will be opening soon. Unfortunately it was too late for a wine tasting but nothing prevented us from sampling their 1781 beer while talking with one of their local patrons. Even though an overnight stay at any Harvest Hosts locations is free, somehow we always spend money (which I guess is the point of the hosts offering free overnight parking). 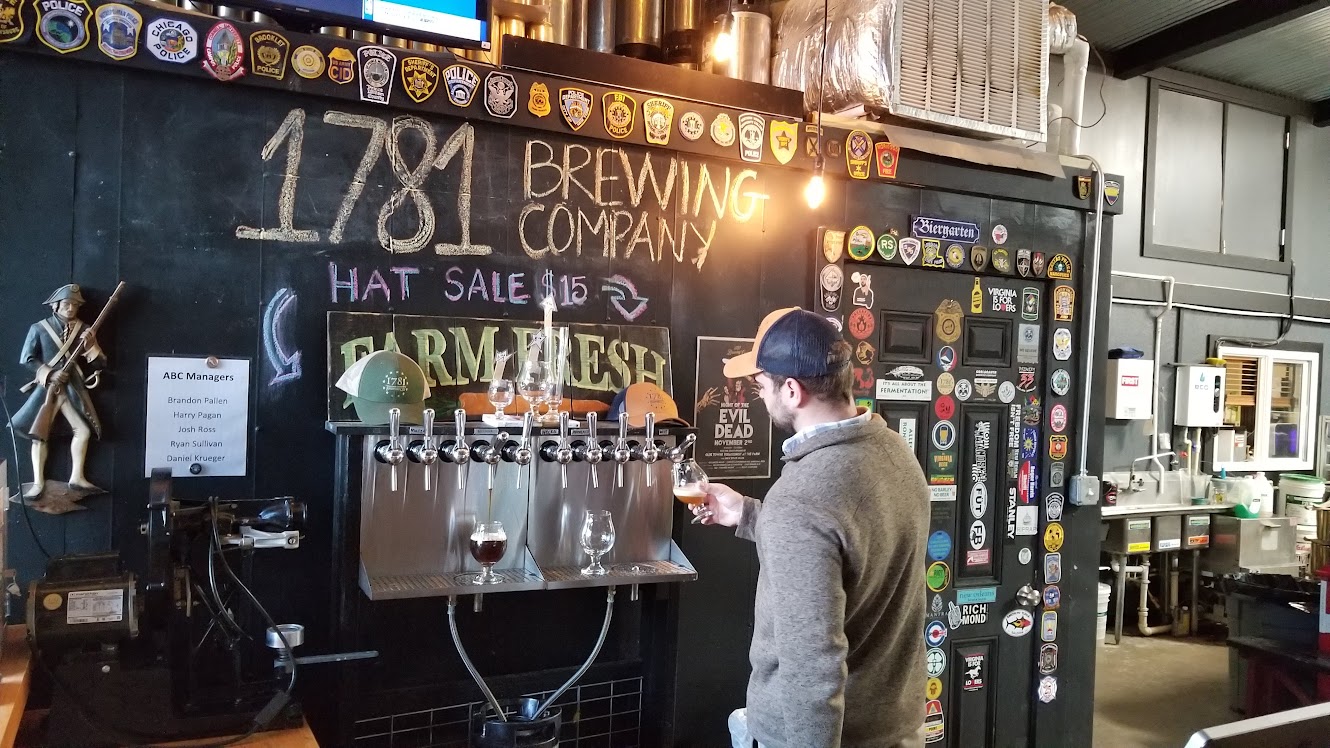 By now we needed something to wash down with the beers, so we paid a visit to their Fire Escape Crazy Burgers food truck parked outside the distillery for a take out order. My Spicy Mushroom Burger ($12), a burger topped with provolone cheese, chipotle aioli and sliced portabello mushrooms, was delicious as was Rob’s cheeseburger. Both came with french fries seasoned with Old Bay. 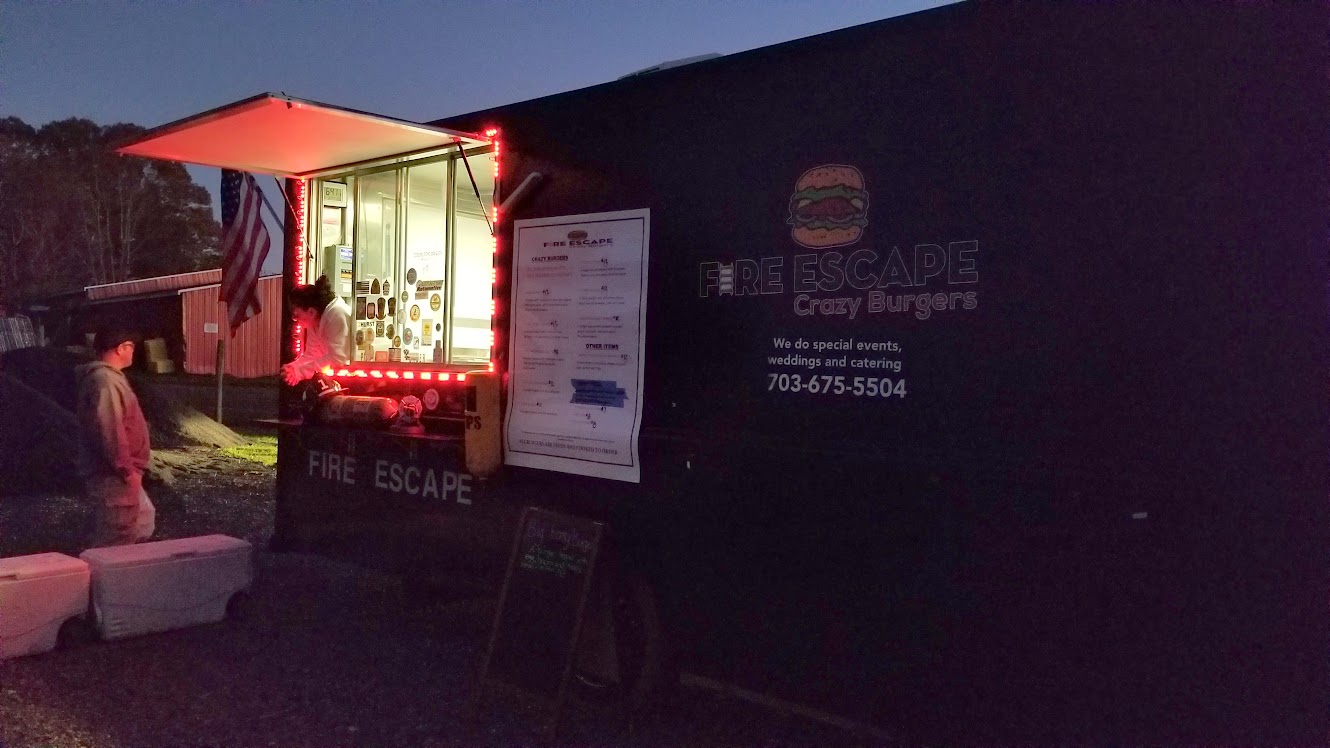 After a quick overnight stop the next night in Wade, NC at Fayettesville RV Resort, 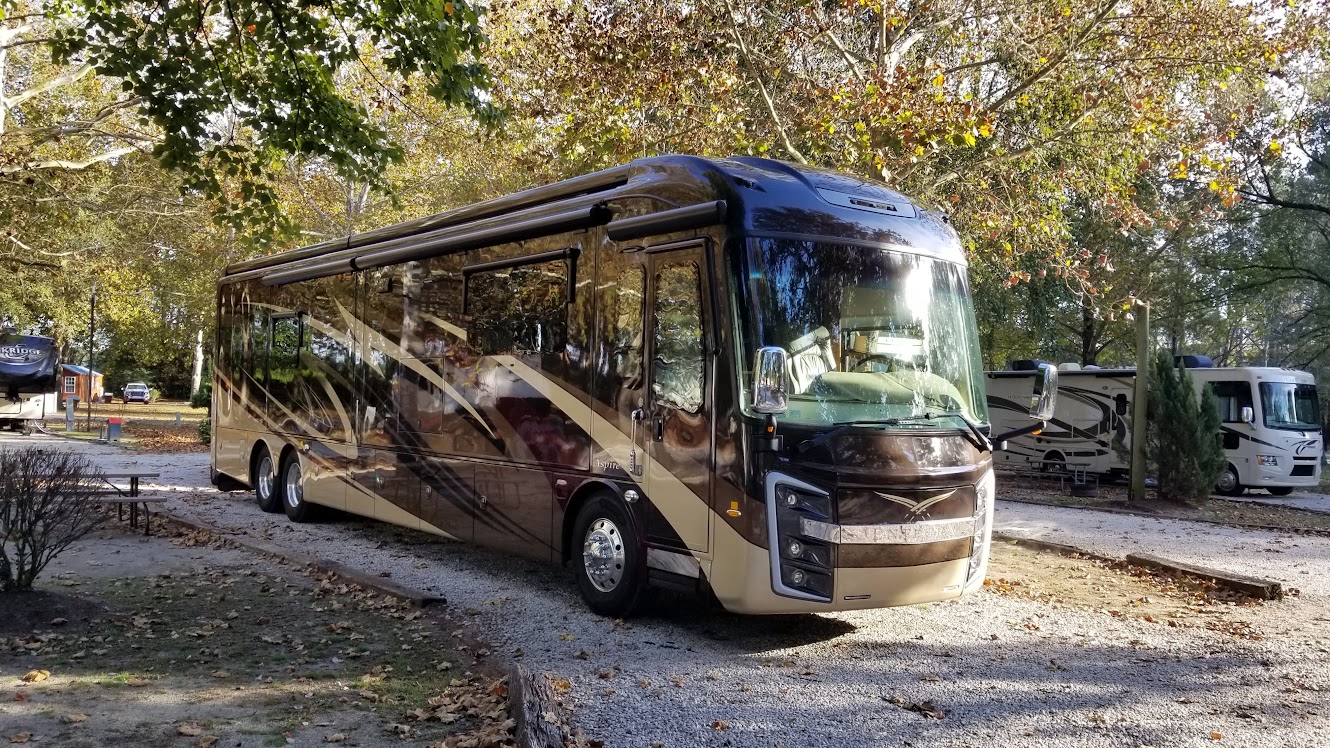 This was a lovely resort, only two years old, a little pricey but that is to be expected for an upscale resort in a tourist destination. Actually it wasn’t that much more than Skidaway State Park where we have stayed also when visiting Savannah. Skidaway is hard to get into on short notice and has only a few full hookup sites. Creekfire does offer Passport America discounts, two night minimum, every month from August to February except for November (of course, that’s when we were there).  Instead of a 50% discount we had to settle for a 10% Good Sam discount. They currently have 104 sites, back in or pull thru but are expanding, adding another 100 sites and other amenities.

In 2018, we had taken an Old Town Trolley Tour of the city and explored many of the sights on foot so spending a lot of time sightseeing wasn’t a priority for this visit, a day to revisit the historic district along River Street would be enough.

After a decent and fairly inexpensive breakfast at The Omelette Cafe, we headed to the historic district where we were able to find a parking space near the Cotton Exchange. Once again, ParkSavannah, a mobile payment parking app made parking very convenient once we found a space. No searching for coins, just pay by credit card from your Smart phone, no worries about getting a ticket because the app will send a reminder when time is running short and a tap in the app will extend your time. 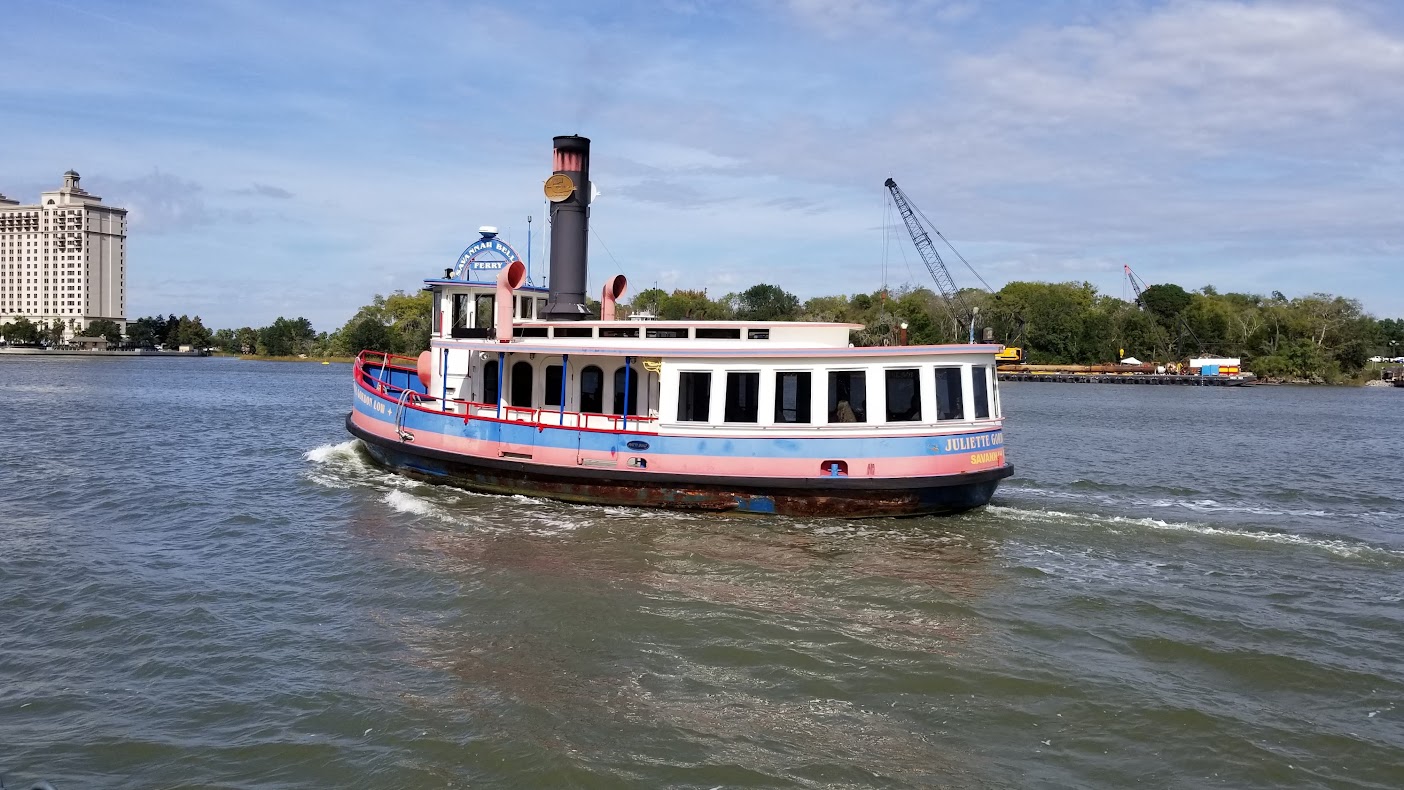 Being a beautiful day, a ride on the Savannah River appealed so we headed to the Savannah Belles Ferry. This free ferry shuttles visitors from River Street, across the Savannah River, to Hutchinson Island with departures and arrivals every 15–20 minutes from 7:00 AM until 12 AM (subject to weather and river traffic conditions), 7 days a week, 362 days a year (closed Thanksgiving Day, Christmas & New Years Day)! It stops at three places – City Hall Landing on River Street, Waving Girl Landing at the Savannah Marriott Riverfront and Hutchinson Island at the Savannah International Trade & Convention Center and adjacent to the Westin Savannah Harbor Resort & Spa. 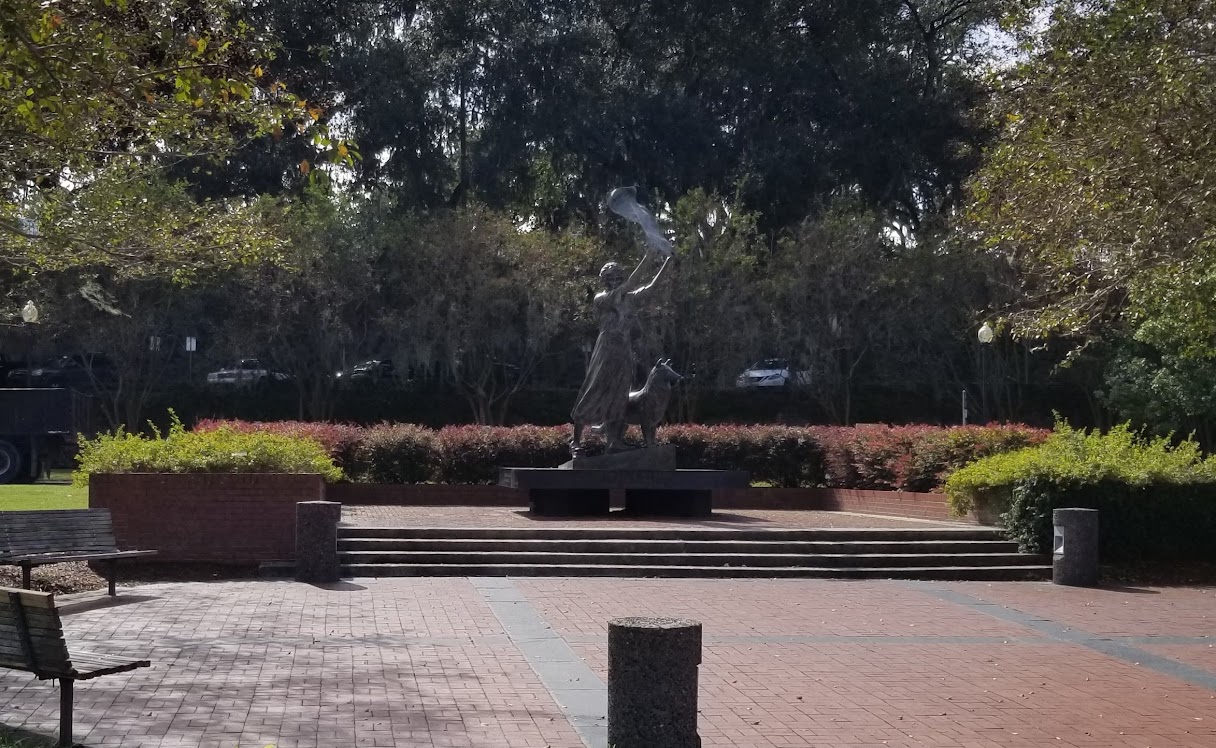 Disembarking at the Waving Girl Landing we strolled back towards the shops, stopping to look at the boats docked along the river. Somehow our feet stopped at the Peanut Shop, a great place to go if you are interested in sampling all types of flavored Virginia Peanuts. Savory Dill, Vinegar & Salt, Jalapeno, Chipotle, Wasabi, Curry, Honey Mustard, Habanero, Chili Lime, you name they have it and tempt their customers with free samples of every flavor. Oh, no, there’s a “buy 3 cans, get a 4th can free” deal going on. How could we resist?

At Savannah’s Candy Kitchen, we fared better. Despite samples of their pralines and their caramel popcorn, both delicious but disgustingly sweet, we walked out of there empty handed, but it sure was fun looking at all the goodies! 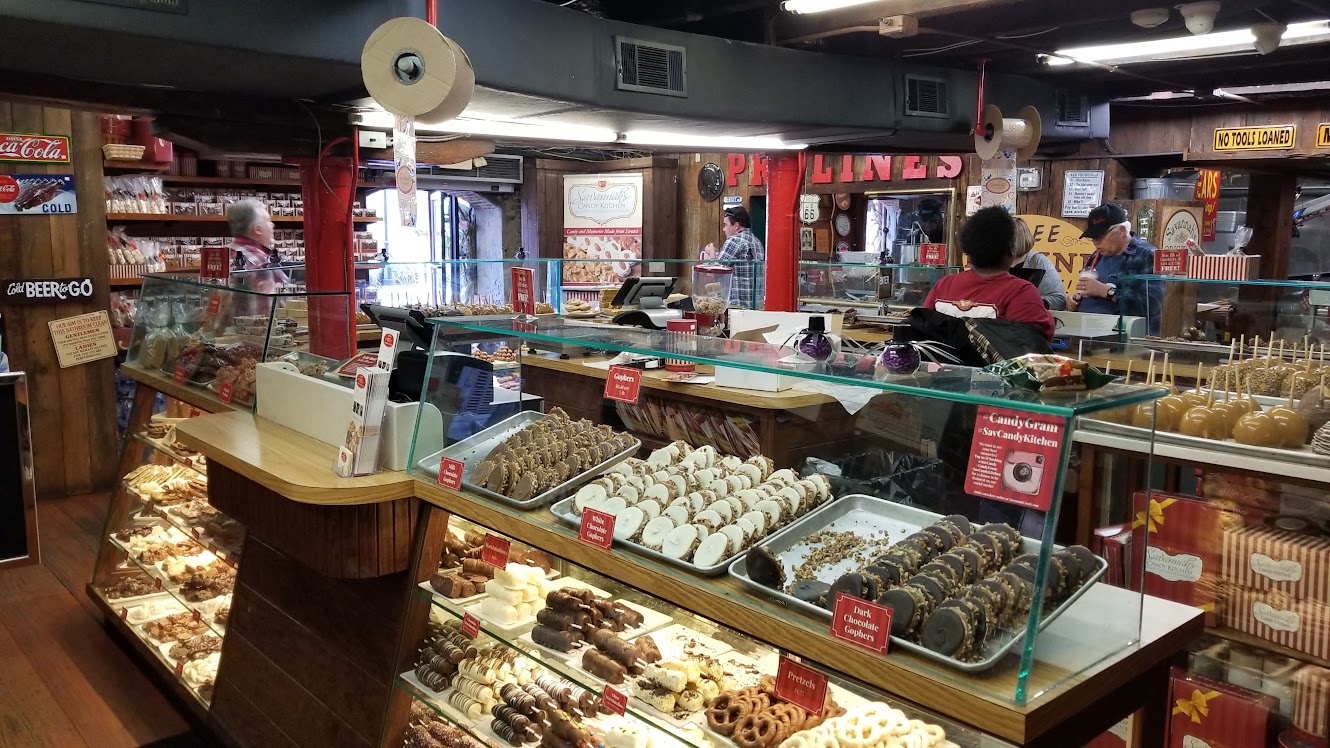 Besides perusing the goodies in the shops, watching the humongous container ships on the Savannah River was quite entertaining. Several of these ships were heading into port during our stroll. 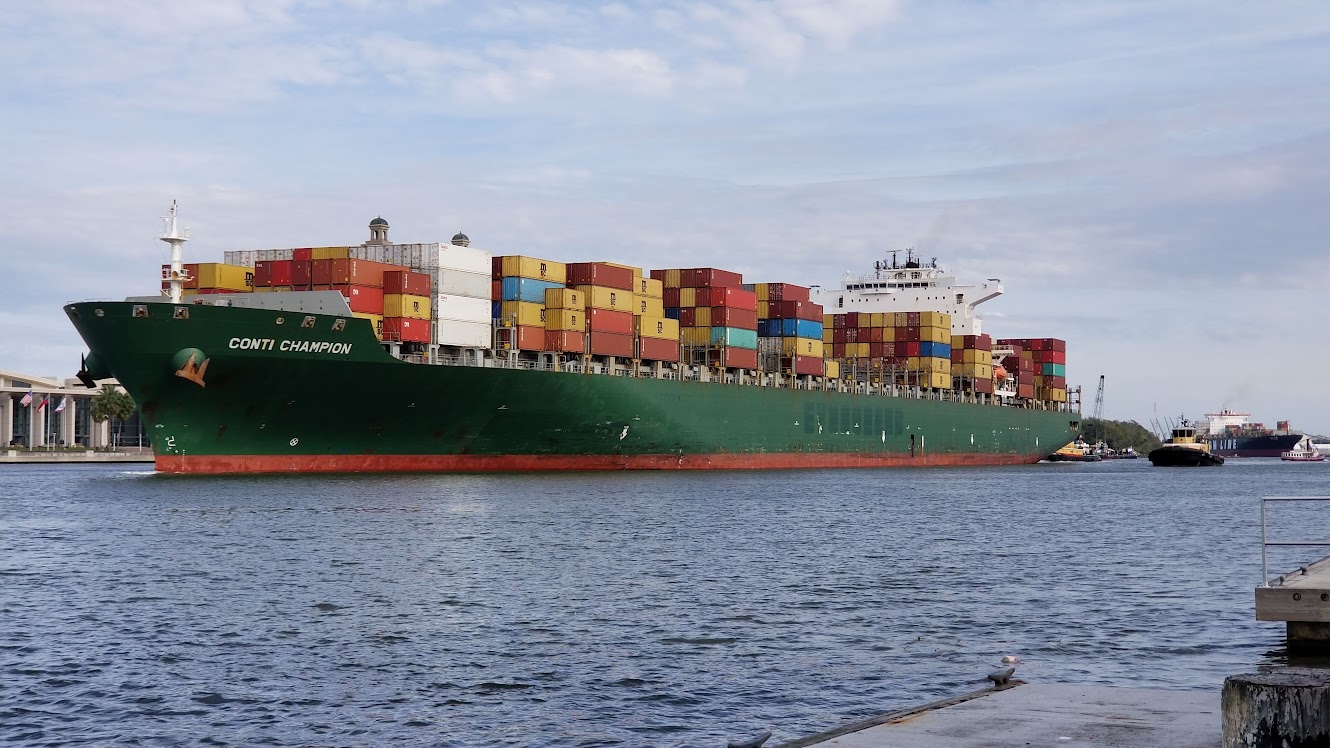 It’s fun using the FindShip app to lookup the tonnage and size of these behemoths. The screen shots below show the Santa Linea and all its details.

FindShip and other apps like it tap into the VHF Radio based AIS system that reports and shares marine vessel info. Even small boats can and do use AIS, but some special hardware and a dedicated VHF antenna is required to be installed on the boat to transmit it’s own AIS data. It is an excellent supplement to RADAR which may show the location of a vessel, but no other details about it. On our last trip to Newport in our own boat, I heard several exchanges on the radio between small vessels and large tankers advising each other of their future movements. Without AIS the vessel names are not known and it is difficult to make contact. 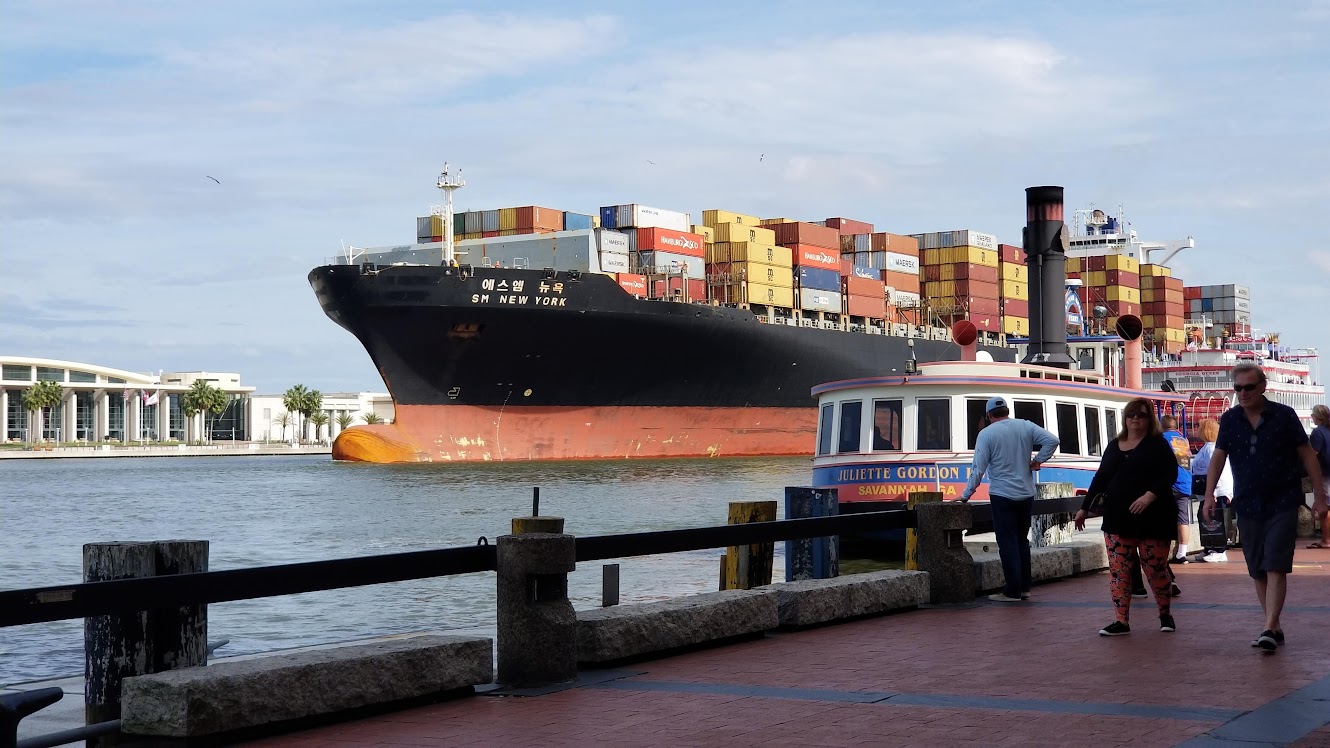 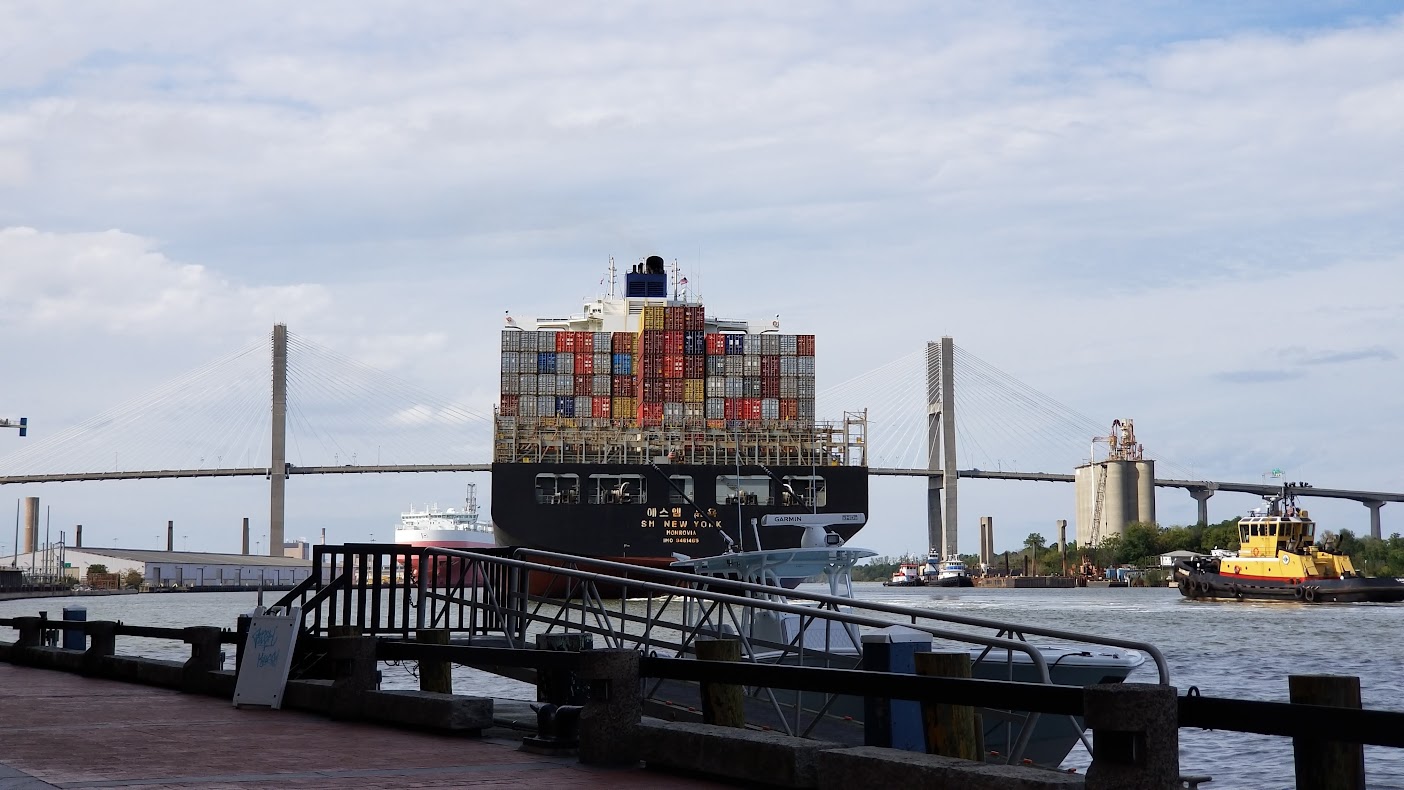 From Savannah, it wasn’t far to our next destination, another place we had been to several times before. Stay tuned for more about that visit!