In all the years that we have gone south to escape the snowy winter weather of New England, including many years before we started RVing, we only visited Universal once in 2007. And yet, I don’t have enough fingers to count all the times we visited Disney World. So why has it been 12 years since our last visit? We both remember commenting at the time that we thought the rides at Universal were more sophisticated than those at Disney World. Would that comment hold true this time? Would Universal’s Wizarding World of Harry Potter be able to compete with Disney’s totally awesome Pandora, World of Avatar? Would riding on a broom be as exciting as riding on the wings of a banshee? Read on to find out!

Spoiler alert! This post contains a lot of information and photos about The Wizarding World of Harry Potter and has videos of some of the rides. If you plan on going and want to be totally surprised, then probably best to avoid watching all the video’s.

As stated in our Ready For A Universally Good Time post, we really felt that bingeing on all of the Harry Potter movies before our visit was extremely beneficial. Being familiar with the story line, the characters and the places allowed us to really appreciate both the rides and the attention to detail in both Wizarding Worlds.

As the Harry Potter rides are the newest and currently the most popular, it is always smart to get to that section of the park as early as possible as it does tend to get more crowded later in the day. That’s not the easiest thing to do because it’s a pretty long walk to Hogsmeade which is located on the far backside of Islands of Adventure from CityWalk but trust me, it was oh so worth it! 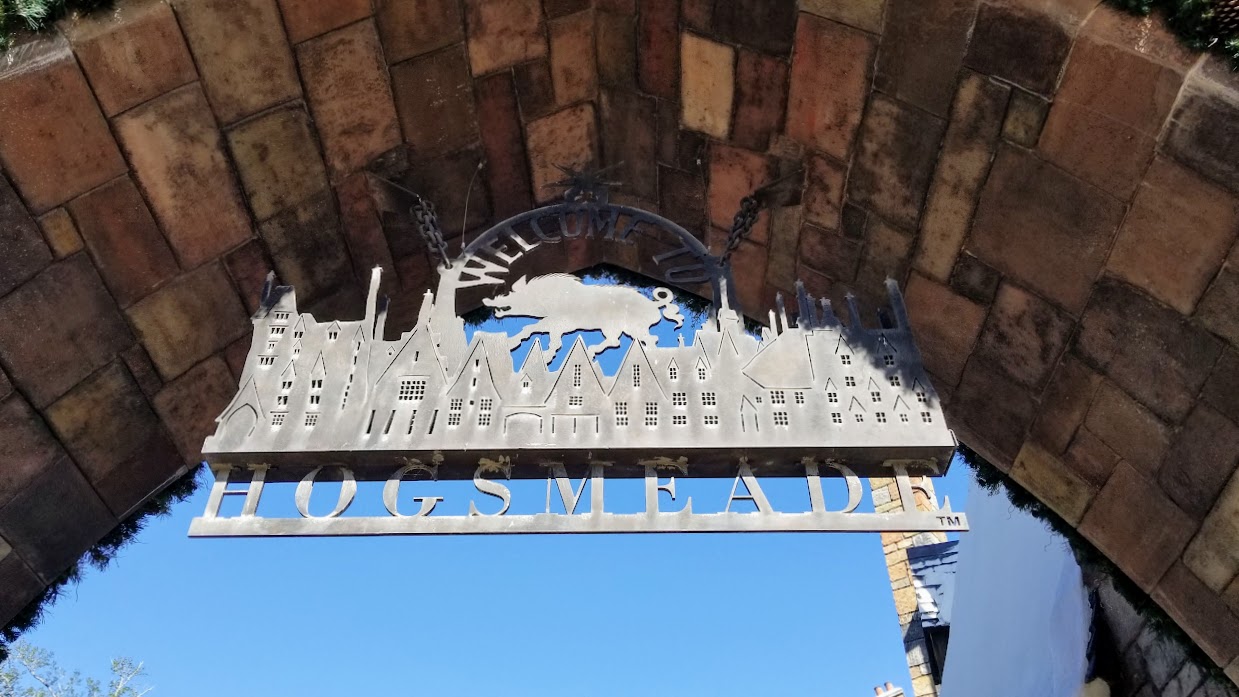 Thirsty after that long walk? Be sure to grab a Butterbeer (a non alcoholic beverage with a cream soda-meets-butterscotch flavor and a sweet whipped topping), along the way (too sweet so we didn’t). Check out this website for more details. 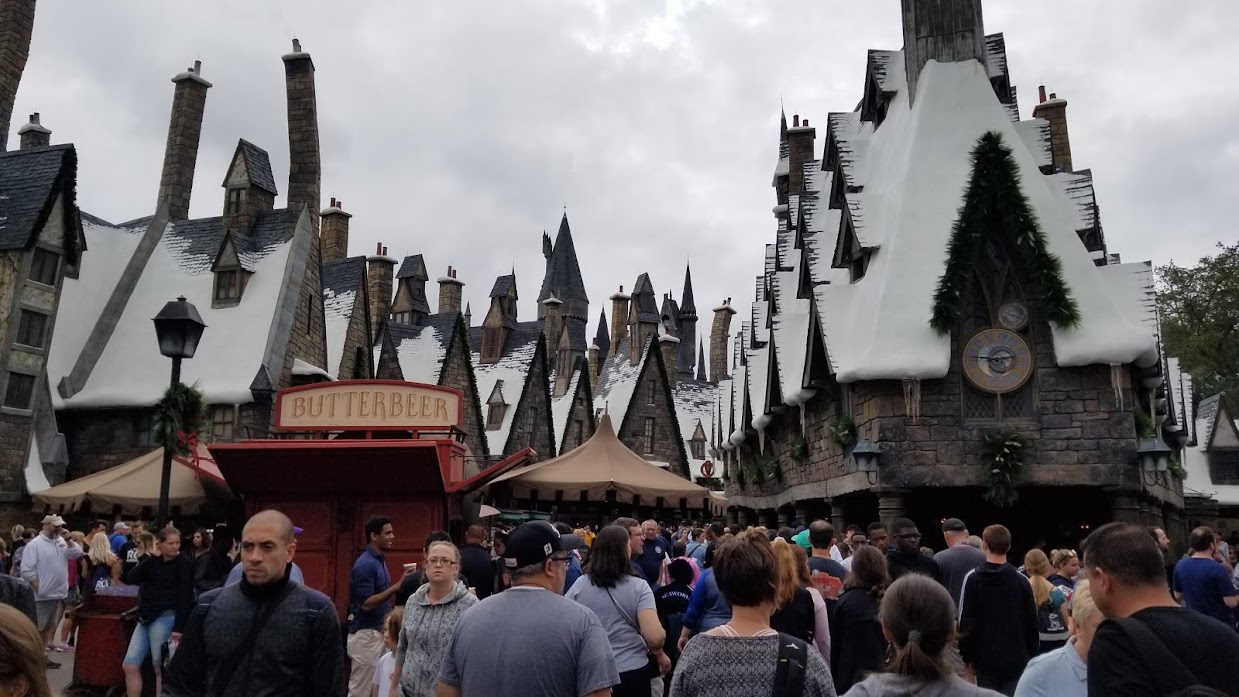 Or if your timing is right, take a fun break by stopping to watch one of the many performances by the Frog Choir, students of Hogwarts accompanied by their throaty frogs. Very entertaining! Here’s a YouTube video of the Choir in action. 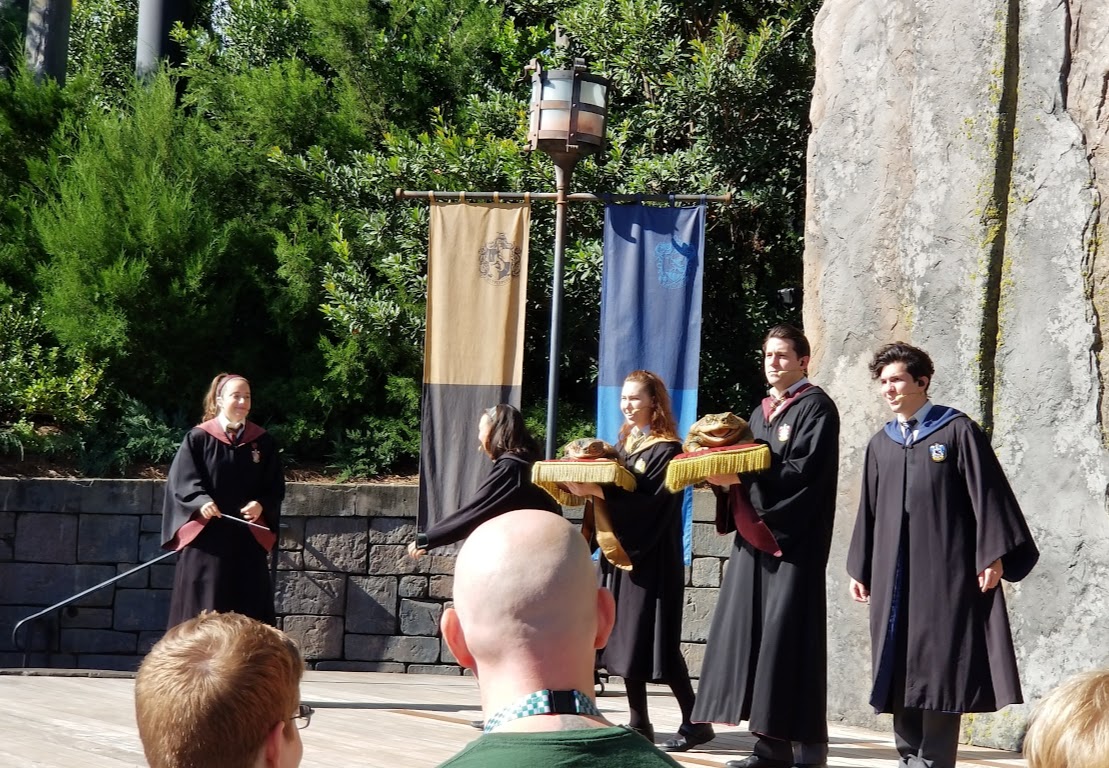 Or catch the Triwizard Spirit Rally, where the legendary wizarding schools of Hogwarts, Beauxbatons, and Durmstrang compete in the Triwizard Tournament. 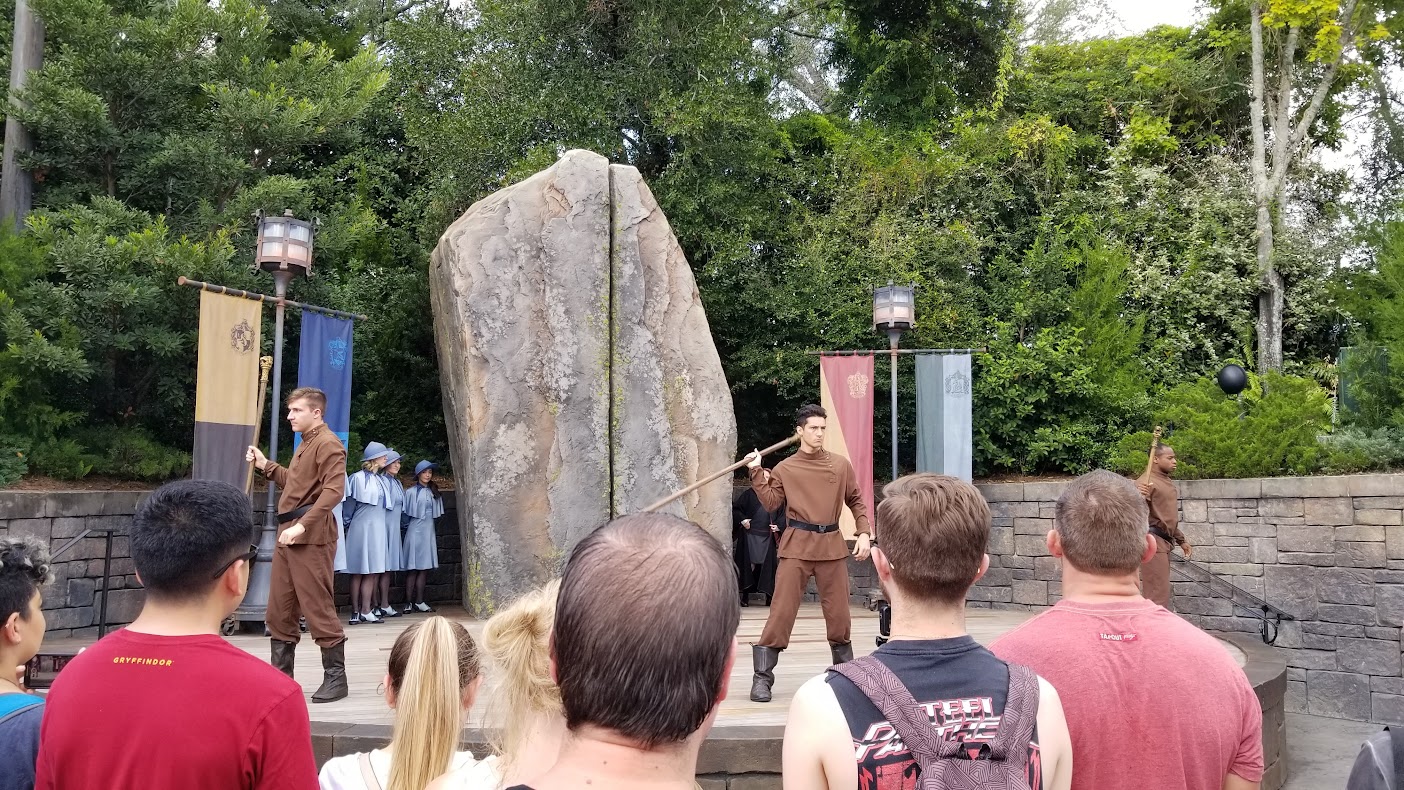 From the street level, it’s hard not to hurt your neck gawking at the formidable, semi-creepy Hogwarts Castle on your way to the awesome and exhilarating Harry Potter and the Forbidden Journey ride. 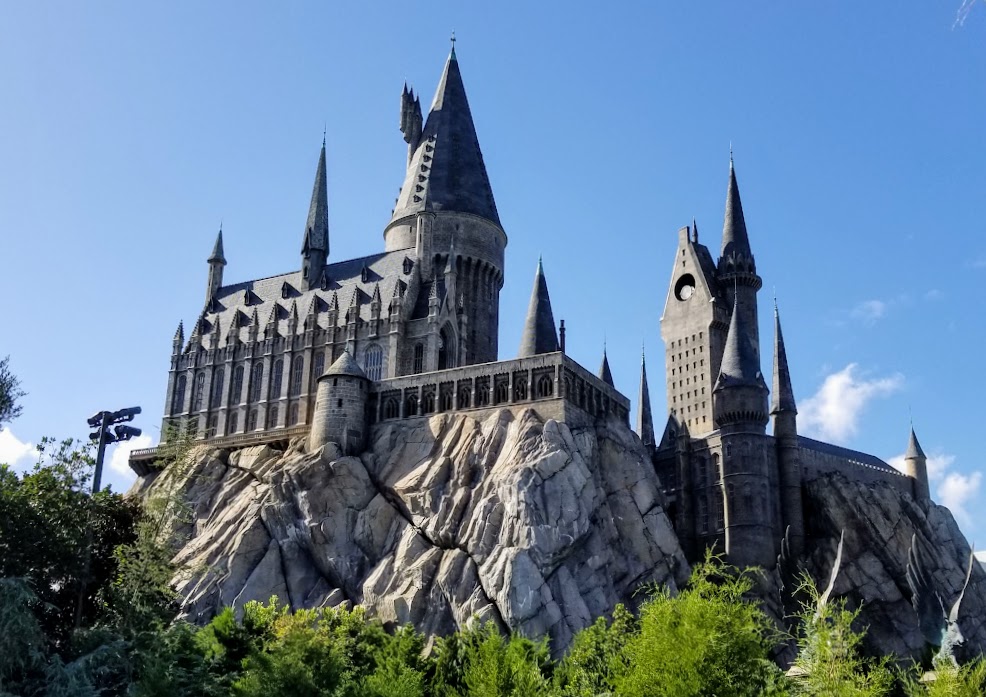 Having an Express Pass is a great idea to avoid waiting in line a long time but it would be disappointing if you had to bypass seeing the Mirror of Erised, the Hogwarts House Jewels, and the talking portraits, which feature the founders of Hogwarts as you walk thru the queue.

And then the ride! Wow! Wow! Wow! This was comparable if not better than  Pandora’s Flight of Passage at Disney World Animal Kingdom. On three separate days we visited this ride and soared above the castle grounds. On the first day (Veteran’s Day), we waited about 45 minutes, the next two times we only had a 15 minute wait and that was enjoying all the distractions in the queue mentioned above.  Do you think this was one of our favorites? It most certainly was!  Definitely a 10 out of 10! To get an idea of what the queue and the ride were like, check out this YouTube video. This is an advanced 3D motion ride giving the sensation of flying. The motion is somewhat more intense than some of the other rides but you are tightly locked onto your “broomstick”.

No comments on the Flight of the Hippogriff since this is more of a kiddie ride and we didn’t ride it. Nor did we ride Hagrid’s Magical Creatures Motorbike Adventure which opened in 2019 so the lines were ridiculously long (2 to 4 hours – no thank you!). In fact due to the crowds they had to shut down the ride several times a day and a few hours before closing time around 3:00 p.m. to ensure that everyone in line had a chance to ride. After watching this YouTube video, the special effects look awesome but I might have to pass on it – looks too similar to a real roller coaster ride to me! Rob definitely wants to ride it though.

But back to the early beginnings, after the very successful opening of the first Potter park, Universal had more plans for Harry Potter. In 2011, they announced plans for a second Wizarding World, themed to Diagon Alley, a cobblestoned wizarding alley and shopping area located in London behind a pub called the Leaky Cauldron. Located in Universal Studios, this new land opened in 2014. Not knowing the history of the Wizarding World, before going, we didn’t realize that the Wizarding World was spread across both parks.

This 42 minute long video created by NBC and narrated by Meredith Veira, shows the making of Diagon Alley. Amazing to see how a plot of dirt ultimately brings the Harry Potter books and movies to life depicting the bustling, wizarding hub in the heart of London. If you watch the video, you’ll see that the attention to detail is absolutely incredible!

Don’t feel like hoofing it the long way around (and it is a long way) between the two Harry Potter lands? Then enjoy a 2,218 ft long magical ride on the Hogwarts Express train which directly connects the two theme parks. At either of the stations, Hogsmeade Station in Islands of Adventure, or King’s Cross Station Platform 9-3/4 in Universal Studios, you must show a Park-to-Park admission ticket before entering (what clever marketing that is!) 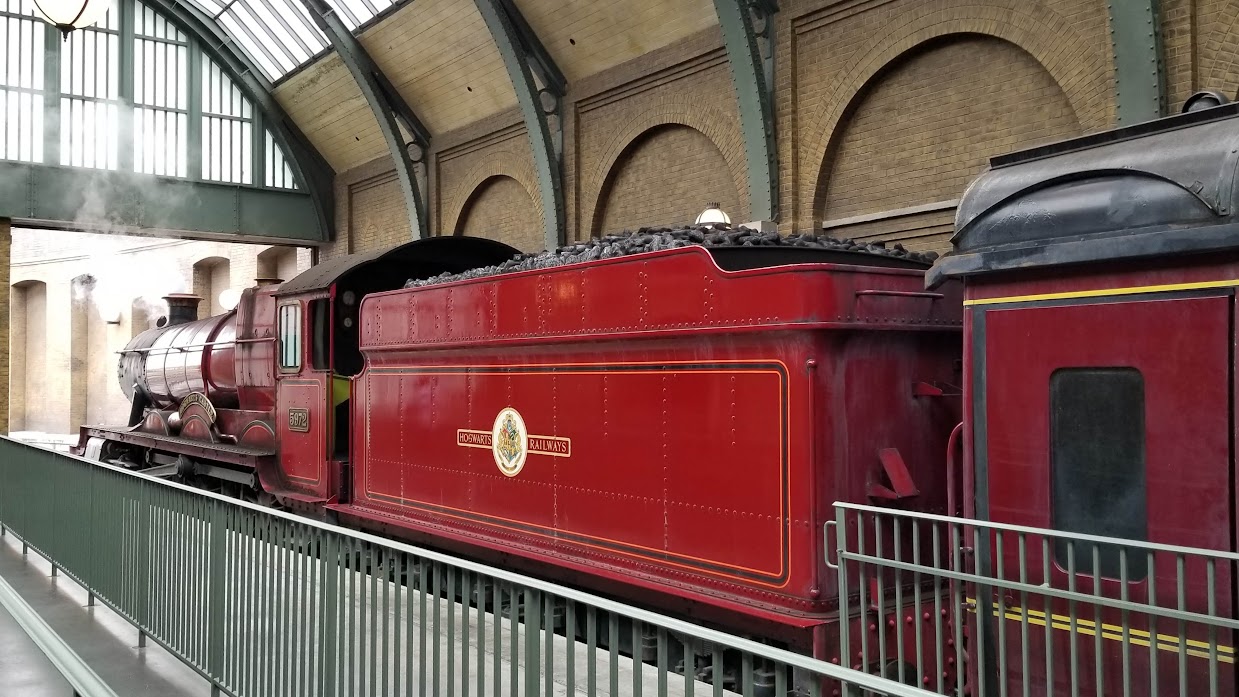 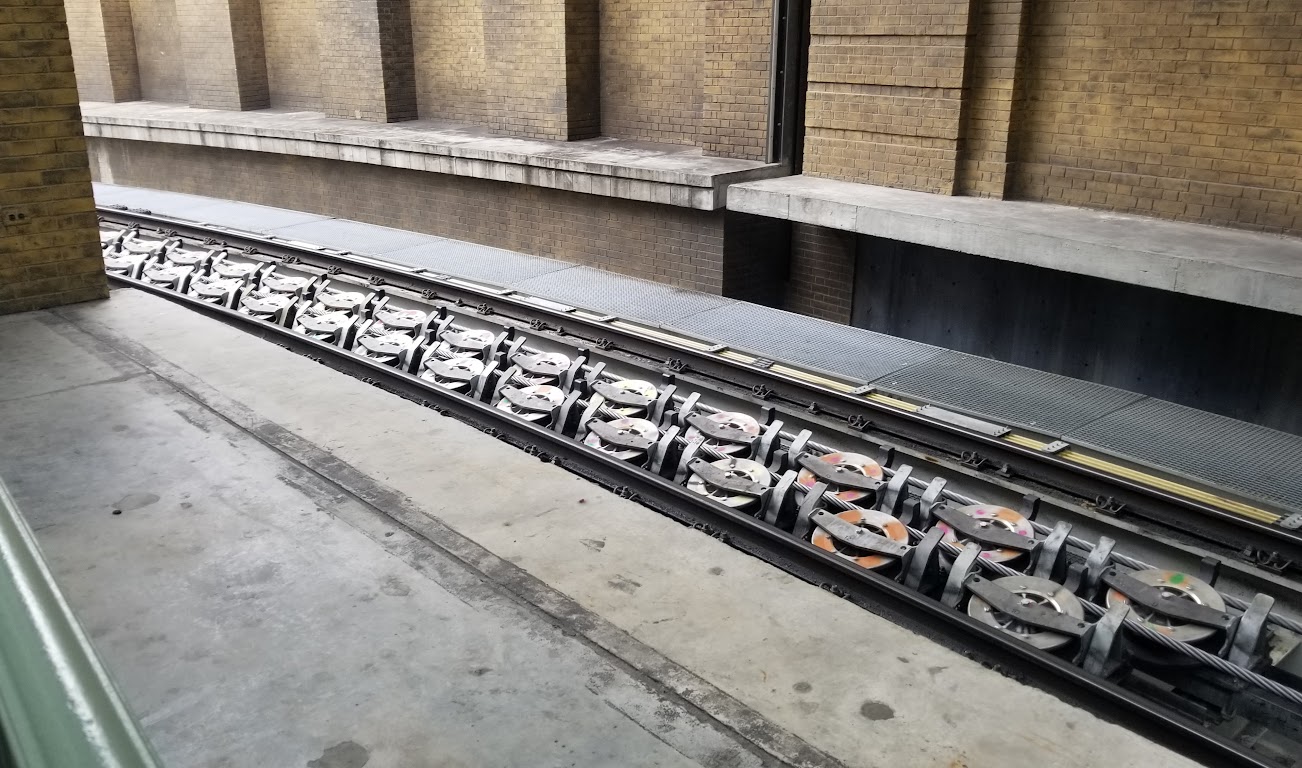 As we climbed up the stairs to the platform, we almost missed seeing others ahead of us vanish through the wall at Platform 9¾ clearly evident at the 3:00 minute mark in this YouTube video.

Once on board and seated in our compartment for eight, looking out the “window” certainly was anything but boring! Ah, yes, there’s the peaceful beautiful London countryside! Wait! What was that? Was that Hedwig the Owl flying by! Oh, my, there’s Fred Weasley riding by on his broom! Be sure to wave to Hagrid standing on the platform. And thru the frosted glass on the interior corridor side of the compartment we could see (silouettes) and hear “magical events” happening outside our compartment. Anyone afraid of spiders? What a fun train ride! Everyone else must think so because the queue gets quite long at certain times of the day. On one day, we experienced a longer than normal wait time because of a problem with one of the trains. The posted wait time was 15 minutes which turned into 45 minutes! Note that the train runs in both directions and you can enter from either park. The experience is different depending on which way you are travelling.

Arriving at the Universal Studios section of the park, the exit is at the Kings Cross train station in London. ‘Twas a little difficult initially finding the entrance to Diagon Alley – no sign marking the entrance, not a mistake but deliberate – after all, the wizards wanted to keep the muggles away! (Hint: it’s across the street from the triple decker Knight Bus). But once inside, the jaw dropping detail replicating the sets seen in the Harry Potter movies was absolutely astonishing. Talk about an immersive experience! Had we left reality behind when we were transported to London through some form of magic?

Step into Gringott’s Money Exchange to interact with a goblin to exchange muggle money (U.S. currency only) for Gringott bank notes which can then be used to buy anything for sale in Diagon Alley or Hogsmeade. Before your final visit to Universal, exchange what you have left back to U. S. money at the guest services office at either park.

Want to test your magical wizardry? Stop by Ollivanders to buy an interactive wand. But be aware buying one will magically remove $52 from your wallet! Because the lines were so long each time we went by the shop, we didn’t go in, but this YouTube video showed us the fun that we unfortunately missed. Note that there are two Ollivanders – one in Hogsmeade and another in Diagon Alley.

With your wand in hand, test your wizardry skills by standing on one of the bronze medallions found at multiple locations on the street. 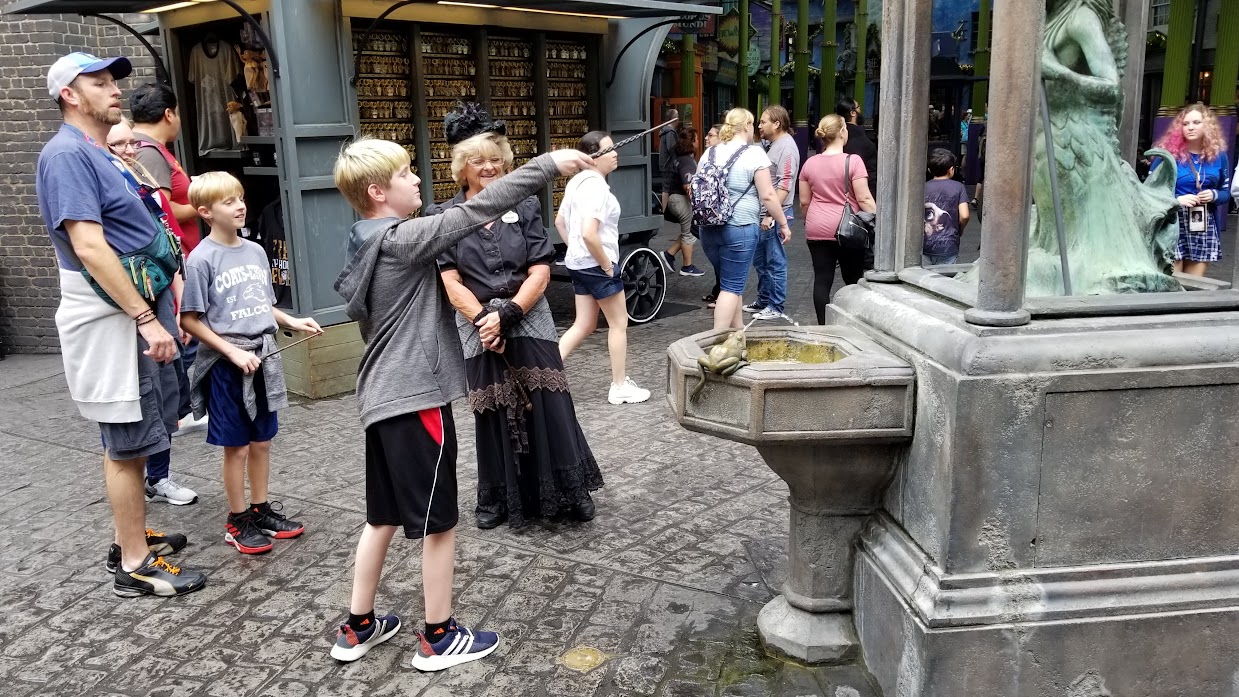 Wave your wand to cast a spell to start a fountain, turn lights on and off in a window, make an umbrella rain or hear shrunken heads sing. Very cool! Fun watching the little “wizards” jump up and down with excitement when their magical powers actually worked. 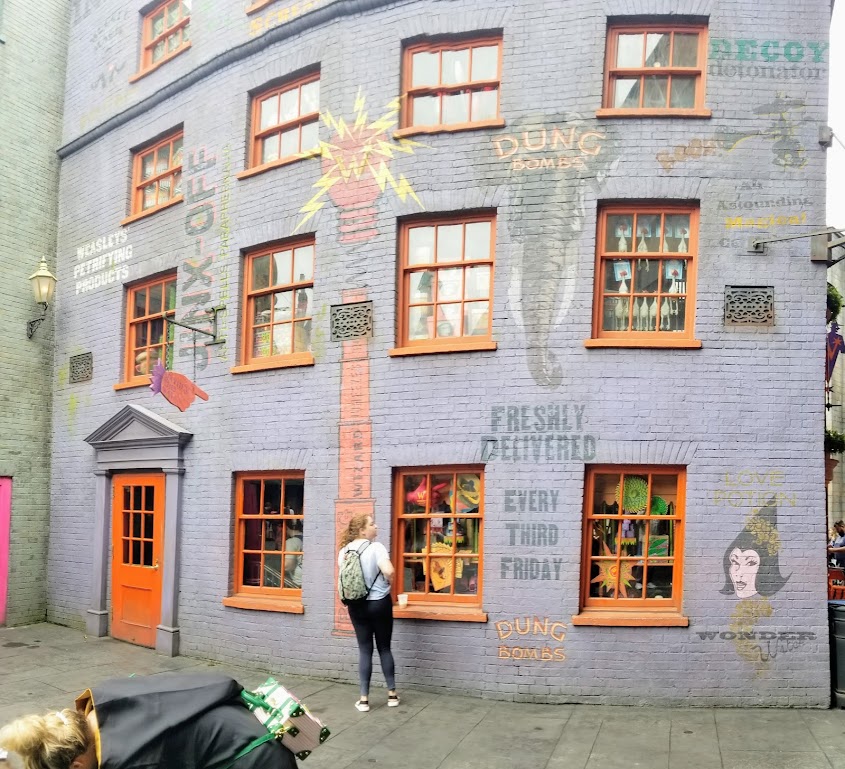 There are many other shops, modeled after ones in the film. Buy a Death Eater mask at Borgin and Burkes. 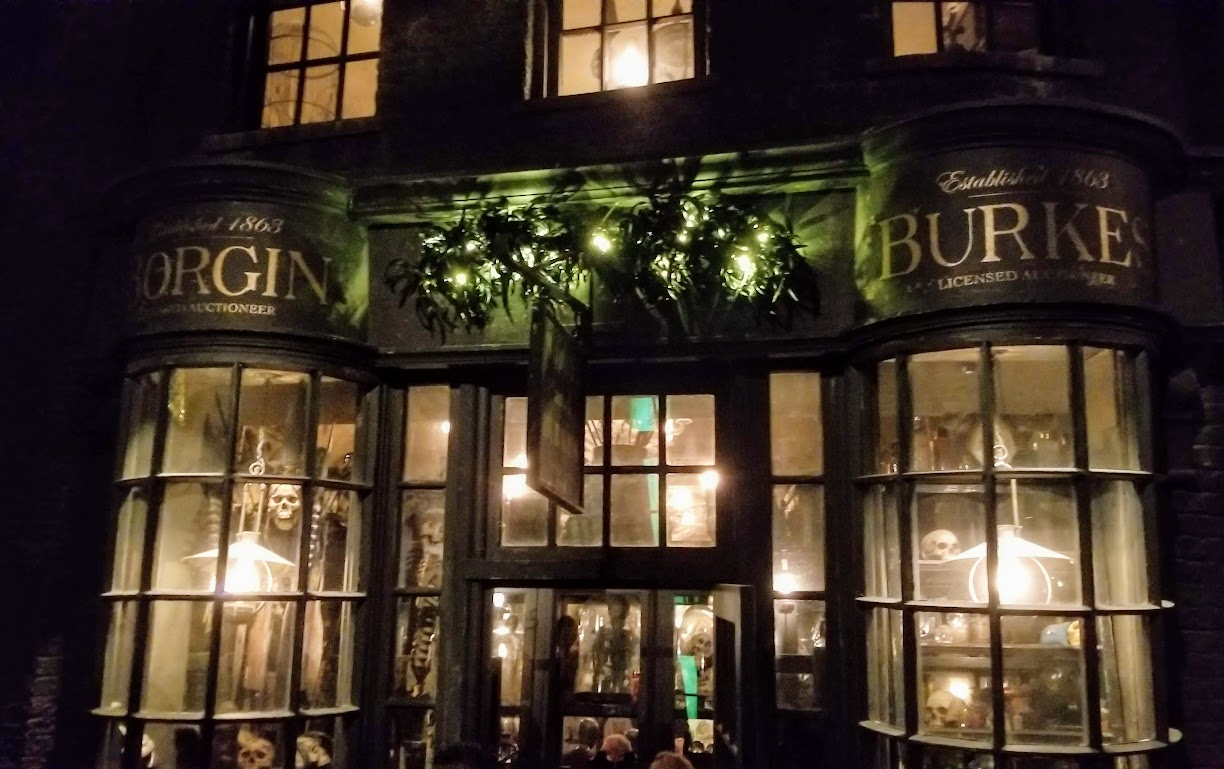 Or buy a uniform or other apparel at Madam Malkin’s Robes and U-No-Poo pills (supposedly it does exactly what the name implies) or Puking Pastilles (pull-your-teeth-out sticky, green and purple hard-boiled sweets that have a mild, pleasant flavor) at Weasleys’ Wizard Wheezes. 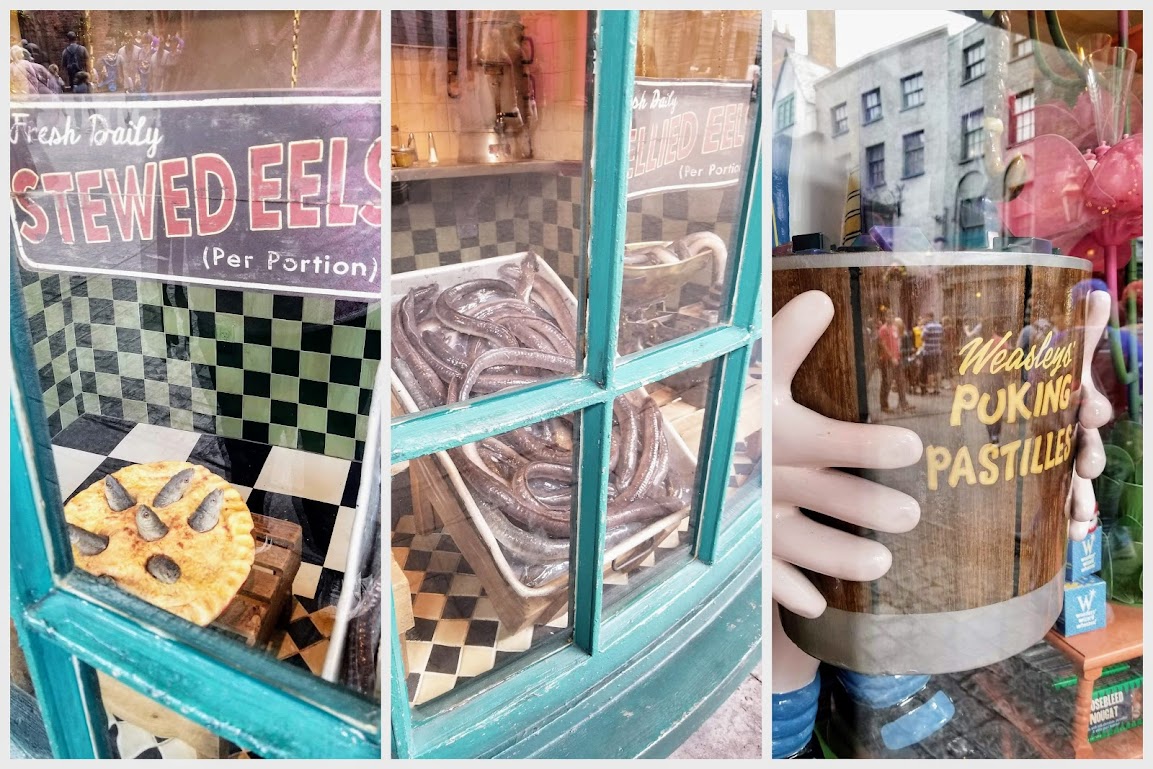 So many intriguing Potter-themed gifts or wares for your favorite wizard! 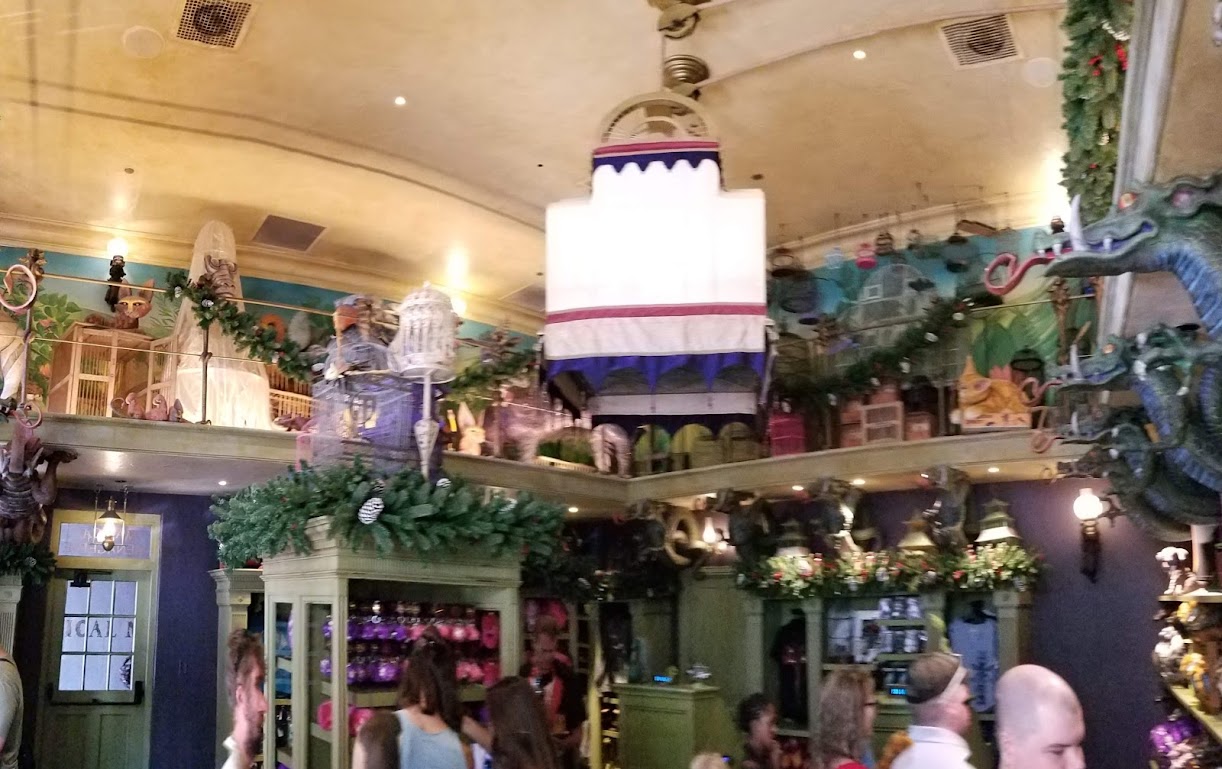 If shopping makes you hungry or thirsty, try the Leaky Cauldron for a sit down meal serving classic British fare and adult beverages. We didn’t eat here but we did go inside just to see the decor. 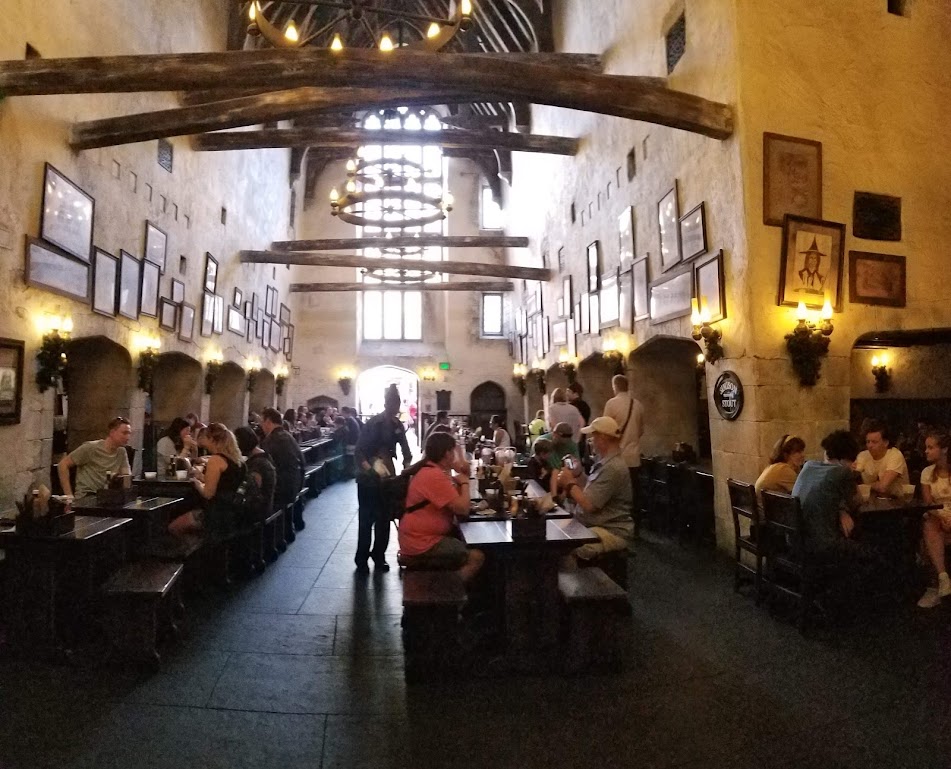 In between all the eating, drinking and shopping, while walking around be sure to catch the fun stage performances of The Tales of Beedle the Bard or Celestina Warbeck and the Banshees put on by The Wizarding Academy of Dramatic Arts. Very entertaining! 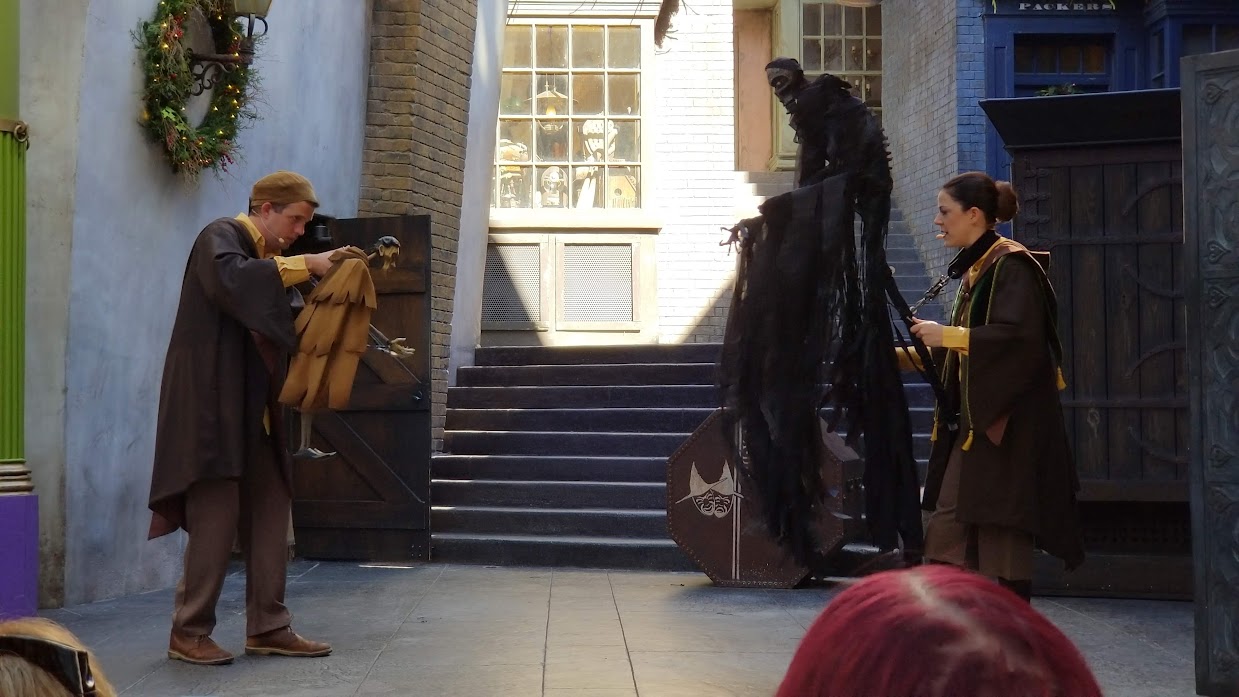 Wanting to experience another multi-dimensional thrill ride, we headed towards the massive fire-breathing dragon (the fire blasting out of its mouth reaches 3,560°F) at the far end of Diagon Alley where we would find the Harry Potter and the Escape from Gringotts attraction. 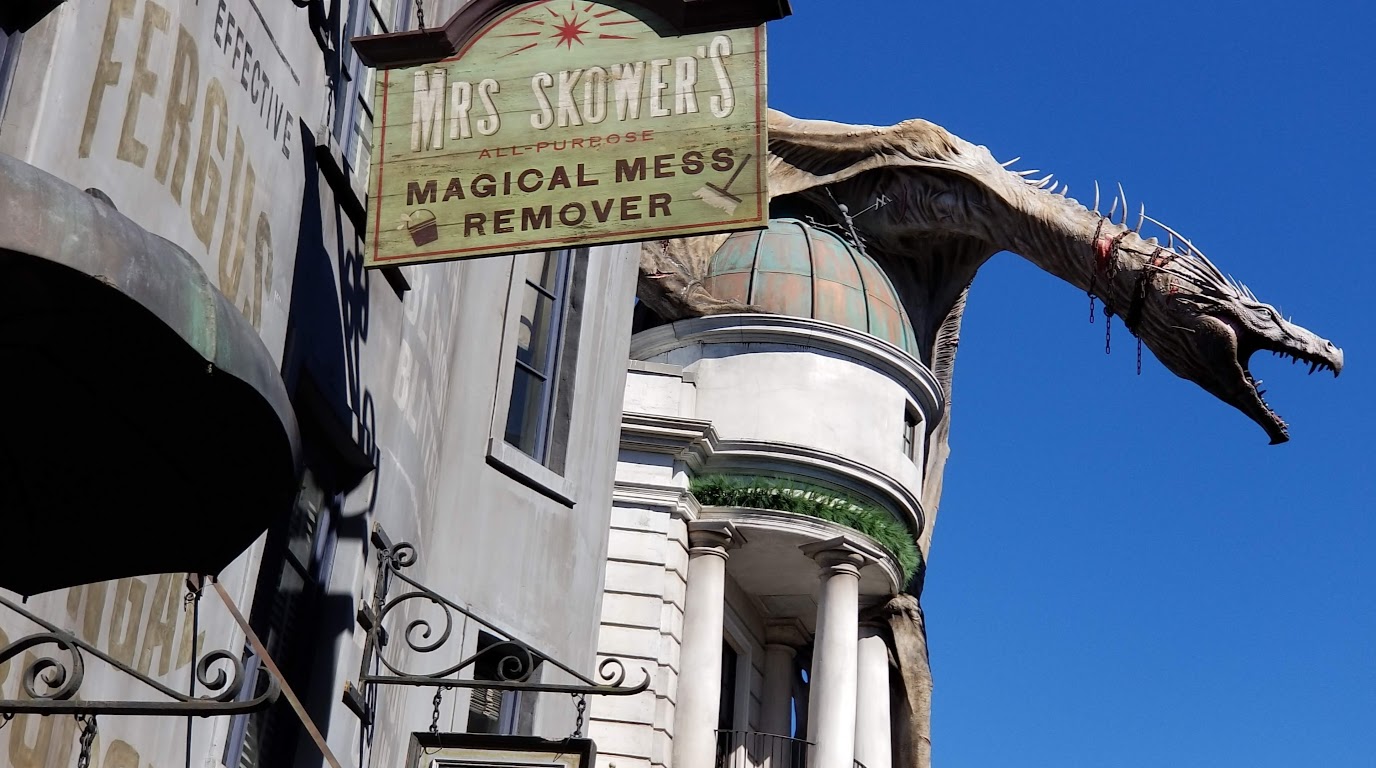 Entering Gringotts Bank, we walked through the bank’s grand marble lobby where four beautiful crystal chandeliers containing a combined 62,000 crystals were hanging from the ceiling. Hard at work were several goblins. 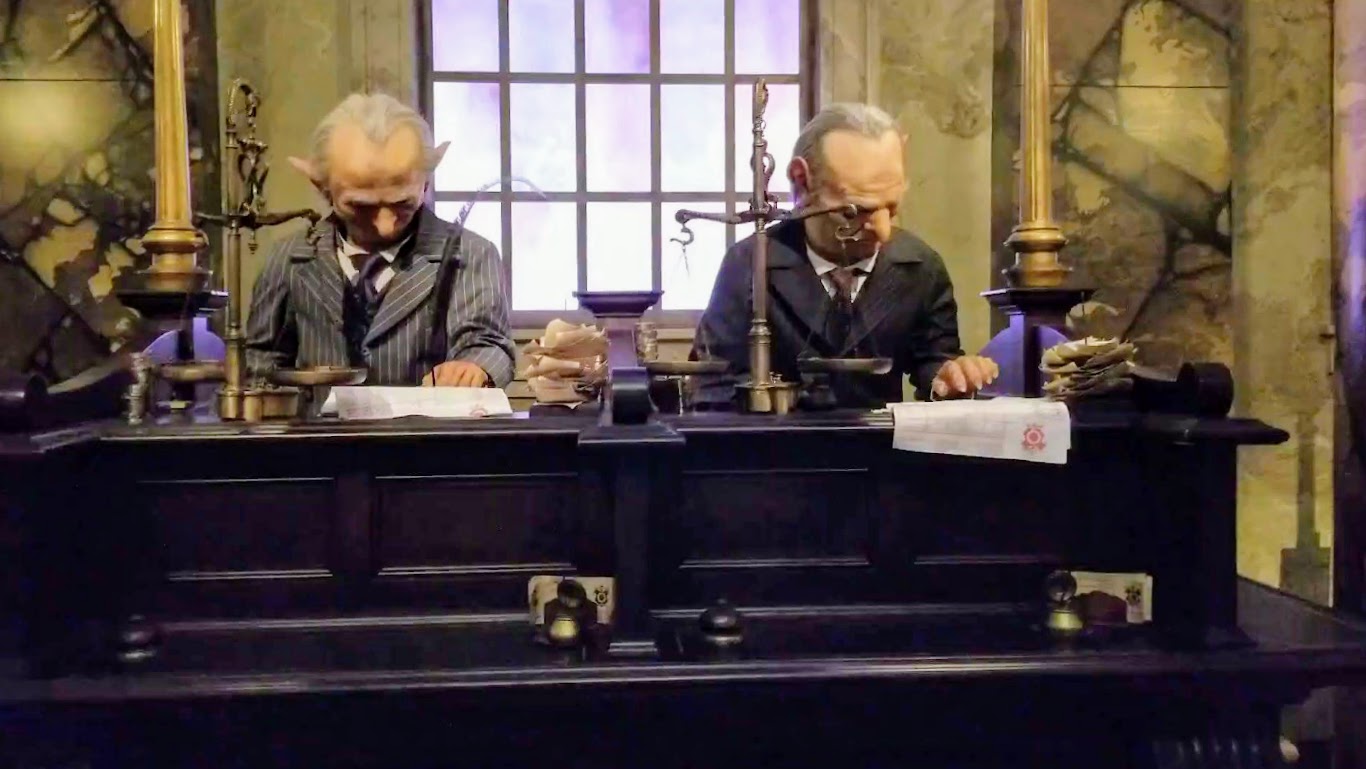 After moving into a large room we were taken deep down into perilous subterranean vaults where we had to evade the wrath of malicious villains Voldemort and Bellatrix. So awesome! We went on this ride twice – add this to one of our top favorites! Our rating: 10 out of 10. Just for a thrill, check out this YouTube video. This ride actually starts out as a roller coaster with a brief but exhilarating drop, then morphs into a 3D motion ride. Very cool!

castle, creating chaos. Dark Arts at Hogwarts Castle portrays the darker side of wizarding by transforming the castle into a canvas for a magical projection mapping show, creating a dazzling light and creepy spectacle. The light show is accompanied by a haunting musical score provided by John Williams.

Although it was scheduled on three of the four days that we planned on visiting Universal and the show was pretty early in the evening (6:00 p.m.), these more mature party poopers couldn’t muster up the strength or the motivation to stay that late (huh, 6:00 p.m. is late???) in the park or even to catch a rest in the coach in the afternoon, followed by a return to the park in the evening. Even that sounded exhausting. Darn! Sure wish we had gone after viewing this fantastic YouTube video of the castle. Oh well, good excuse to go again!

Well, that wraps up our visit to the Wizarding Worlds and concludes our four days of fun…sigh! Back to reality and time to continue our journey southward. Next stop – our site at Riverbend Motorcoach Resort where we’ll stay until the end of December. More about that next time…