Wander the streets of New York or San Francisco.

Take a step back in time in Jurassic Park. 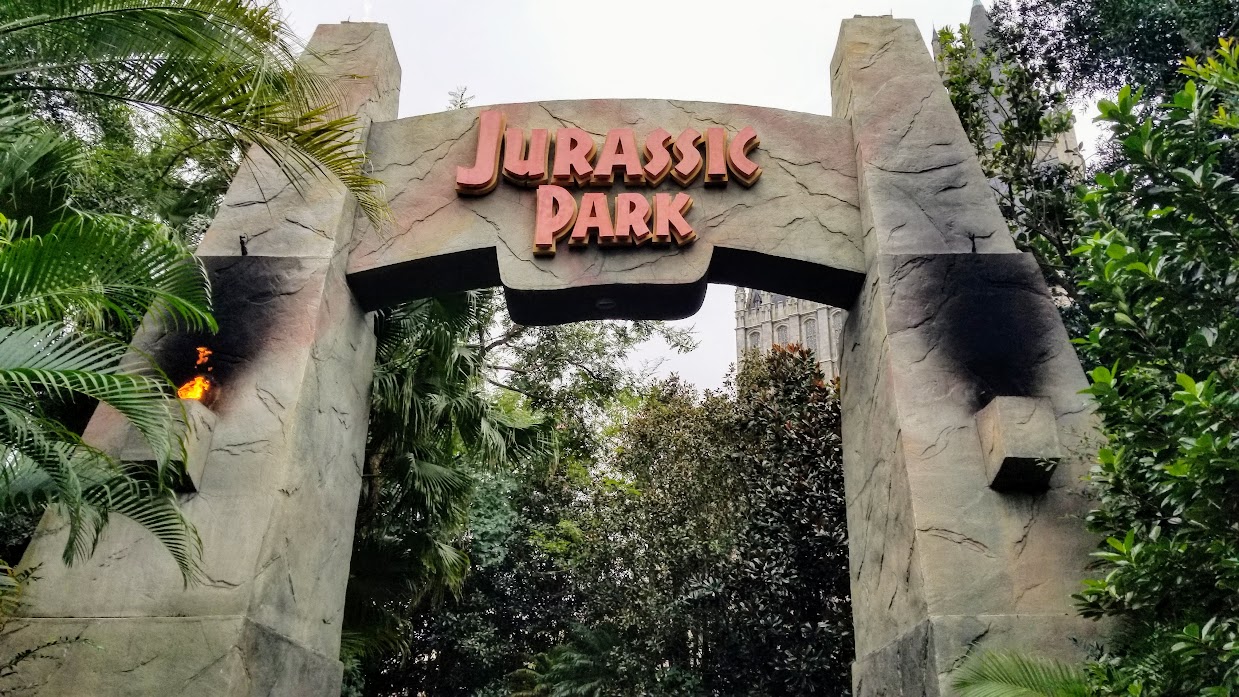 Explore the Lost Continent with Poseidon, the God of the Sea. View the 887 skulls and experience terror at Skull Island: Reign of Kong. Get really wet and squooshy riding the raging rapids with Popeye on Bilge Rat Barges. Scream your lungs out on the exhilarating Incredible Hulk Roller Coaster.

Yep, there’s a lot to see and do at Universal which made for a very busy and exhausting four days for us. Rather than making your head (and mine) swim providing a day by day detailed account of what we did, the focus will be to cover our favorites at each park, showing the wait times we experienced and rating each attraction.  Anything to do with Harry Potter will be covered in a separate post.

Before proceeding, here’s a spoiler alert! This post contains a lot of information and photos about attractions in both Universal Studios and Islands of Adventure and has videos of some of the rides. Some videos actually show the ride while others shows fascinating details on how the ride was constructed. If you plan on going and want to be totally surprised, then probably best not to read this post!

Click on any of the attraction titles to see Universal’s description of the ride. 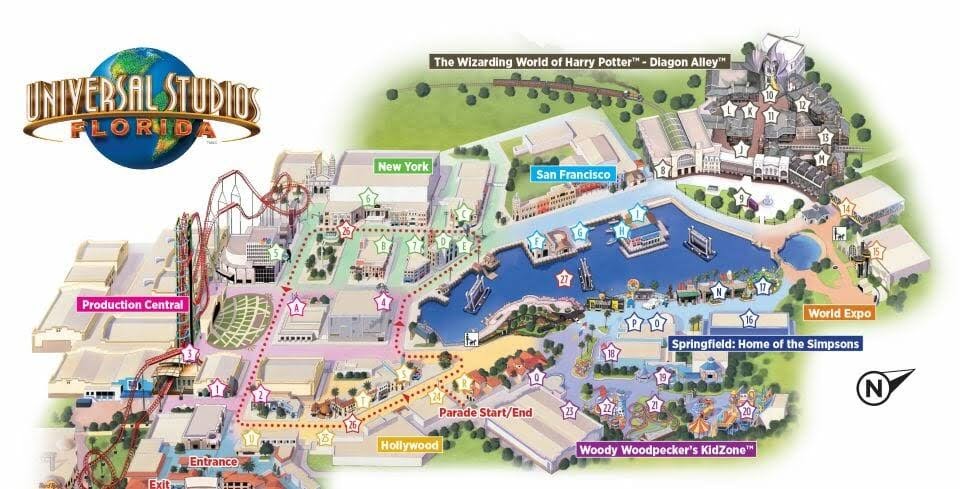 Despicable Me Minion Mayhem
Wait time: less than 10 minutes (despite the fact that it was Veteran’s Day). Our rating: 7 out of 10.

Located a short distance from the park entrance in the Production Control area, be sure not to miss the cute pre-show, hosted by Gru and his daughters. Watch this video to see how much fun this ride was! Not a roller coaster, 4D Motion Simulator. 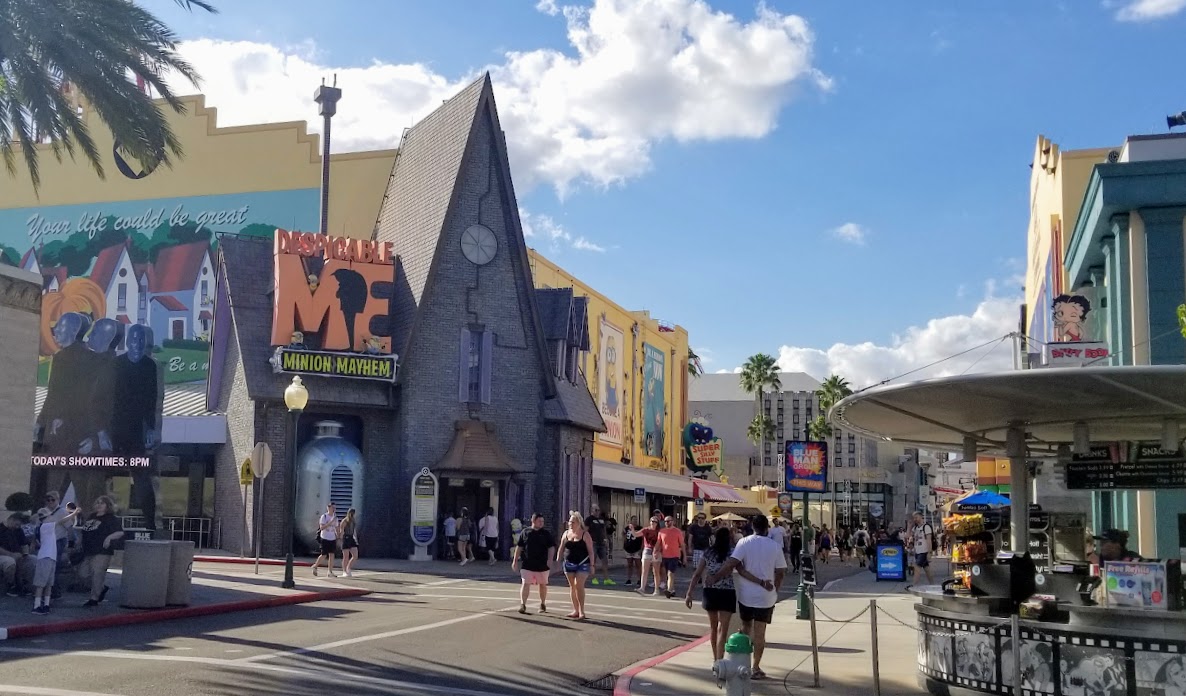 Shrek 4-D
Wait time: less than 10 minutes (despite the fact that it was Veteran’s Day, there was no wait). Our rating: 8 out of 10 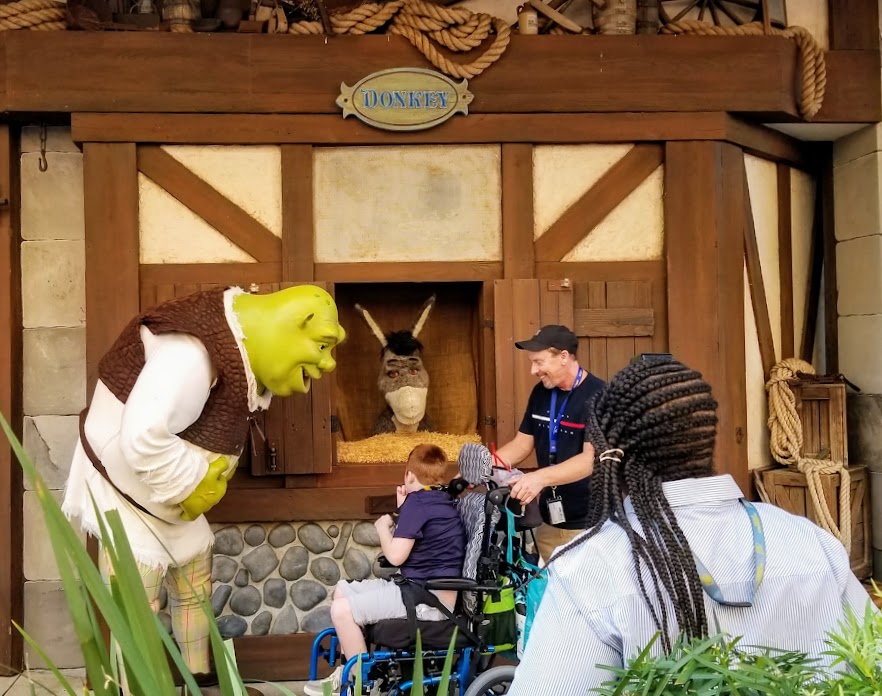 How can anyone resist a story involving the lovable ogre appearing in the  adventure? We certainly couldn’t. Shrek and Donkey are in hot pursuit of Lord Farquaad who has returned (in ghostly form) to Far Far Away and has kidnapped Princess Fiona.  4D Auditorium ride where moving seats, water, wind, and mist are just a few of the special effects that made this multi-sensory adventure loads of fun!

Transformers: The Ride 3-D
Wait time: less than 10 minutes (despite the fact that it was Veteran’s Day, there was no wait). Our rating: 7 out of 10 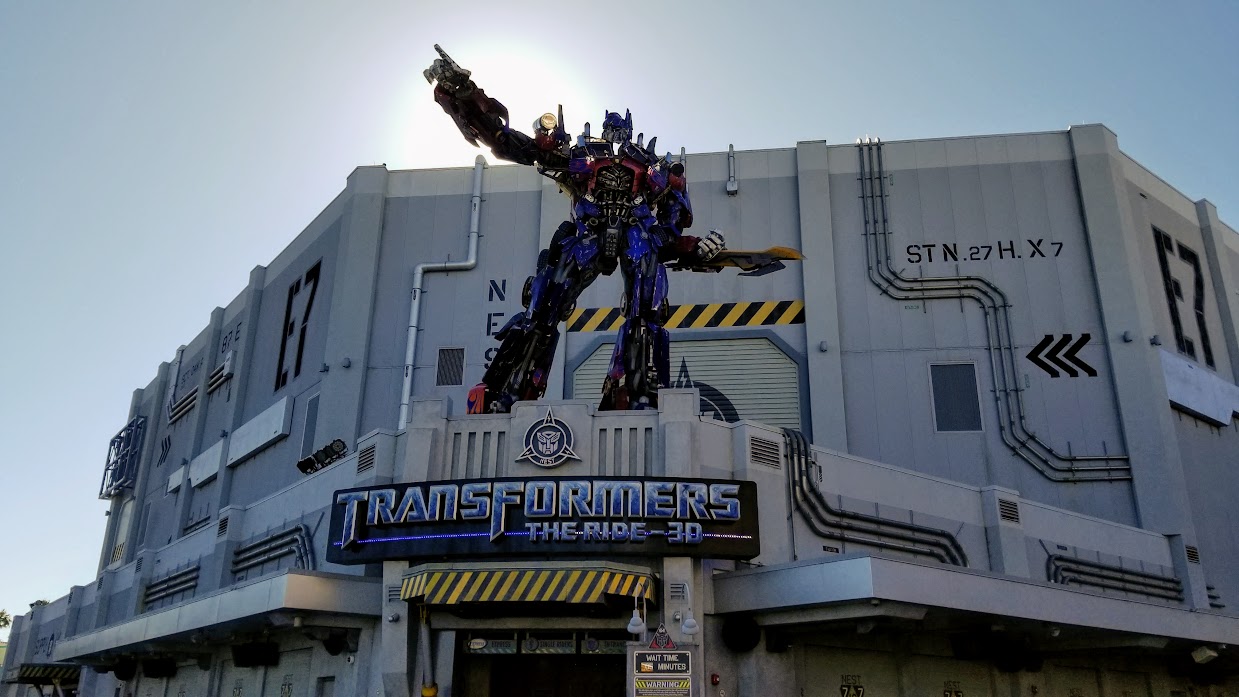 Since I’ve never seen any of the Transformers films I didn’t know what to expect and didn’t have a clue who the main characters Optimus Prime and Bumblebee were. According to Wikipedia “This dark ride consists of motion platform-mounted vehicles which follow a 2,000-foot-long track. Throughout the ride, screens up to 60 feet (18 m) high project 3D images of various Transformers characters as the Autobots attempt to protect the AllSpark from the Decepticons.” Despite not knowing anything about it, it was a pretty thrilling ride which you can see if you watch this YouTube video. It’s similar to the Spiderman ride, just a different theme.

Race Through New York Starring Jimmy Fallon
Wait time about 15 minutes. Our rating: 9 out of 10.

What a treat it was to stroll through NBC Studios, seeing all of the memorabilia from the Tonight Show! 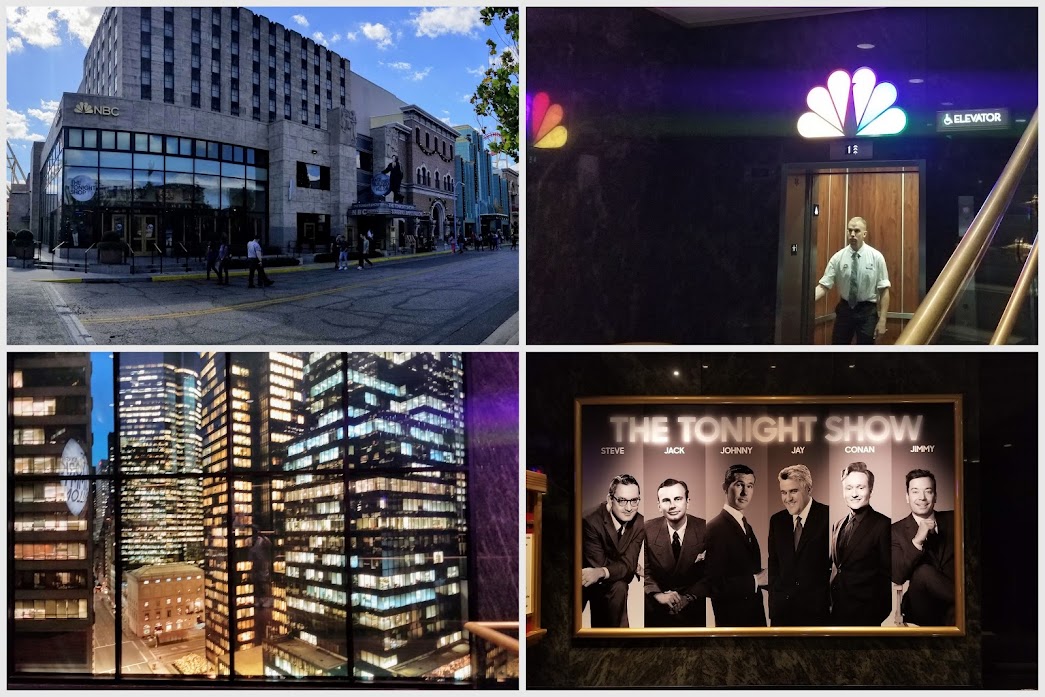 And even more of a treat was that Jimmy greeted everyone during the pre-show and asked Tarik, leader of the Roots band to rap the rather mundane safety instructions to make them a little less boring. Good job! Then it was off to the fun-filled race, traveling through, below and above New York City and even to the moon! Exhilarating! So much so, we returned for another race on our last day visiting the parks. Check out this YouTube video made at the grand opening. Auditorium based 4D Motion Simulator.

Fast & Furious Supercharged
Wait times were about 15 minutes.  Our rating: 5 out of 10 (our least favorite ride at Universal) 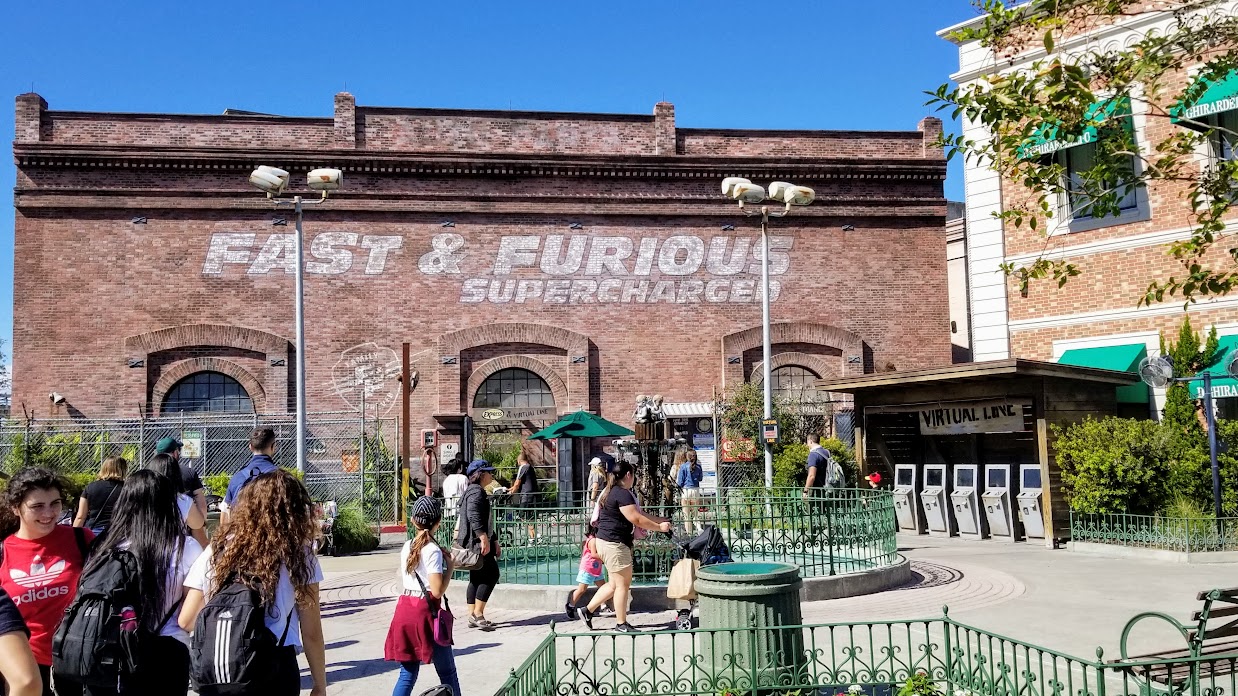 Leaving the New York area behind, we headed to San Francisco where this ride is the main attraction. Once again not real familiar with the theme of the movie (except that it is fast and furious) and we’re not really into cars or racing so it didn’t hit the mark for us. See for yourself by viewing this YouTube video. Basically a tram ride with motion simulation.

In Springfield, we joined this dysfunctional family on a virtual reality roller coaster ride through Krustyland. Comical pre-show and a fun ride!! Make your day a little brighter by viewing this YouTube video. A Motion Simulator ride with more intense motion than some of the others, but still not a roller coaster. 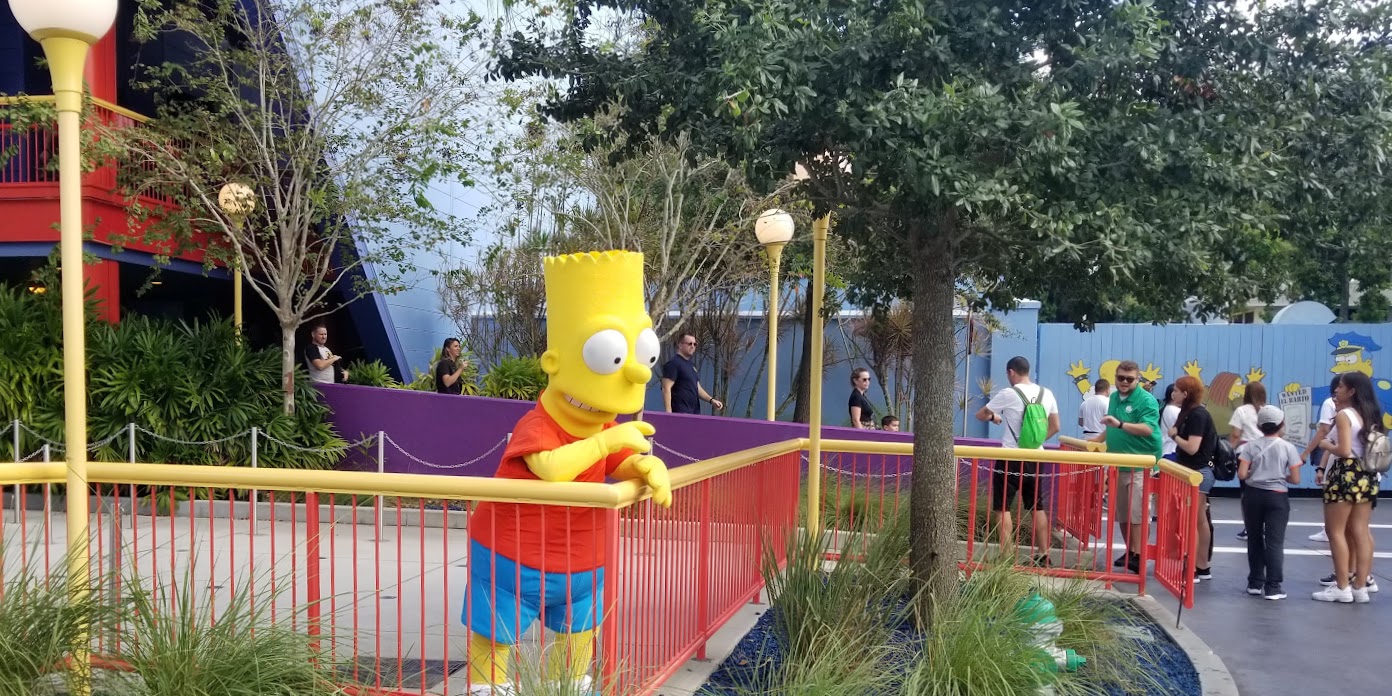 Hollywood Rip Ride Rockit
This is a roller coaster. To start you climb literally straight up at a 90 degree angle, then drop 17 stories while listening to your own private selection of rock music. There are several other loops and twists as the ride takes you across much of the Universal landscape. My stomach is doing flip flops just thinking about it!

Revenge of the Mummy
Instead of enticing us to stand in line to experience this ride, the words “plunge high speed into total darkness” and “indoor roller coaster and face an army of mummies” caused us (well me anyway) to walk as fast as we could past this ride. This is a launched (accelerated) roller coaster ride in the dark. Do you get the feeling that I don’t like roller coasters?

Animal Actors on Location and Universal Orlando’s Horror Make-Up Show
Walking through Woody Woodpecker’s KidZone, we missed both of these shows in Hollywood. We had seen both shows during our last visit to Universal and would have liked to go again but the timing never quite worked out for us. 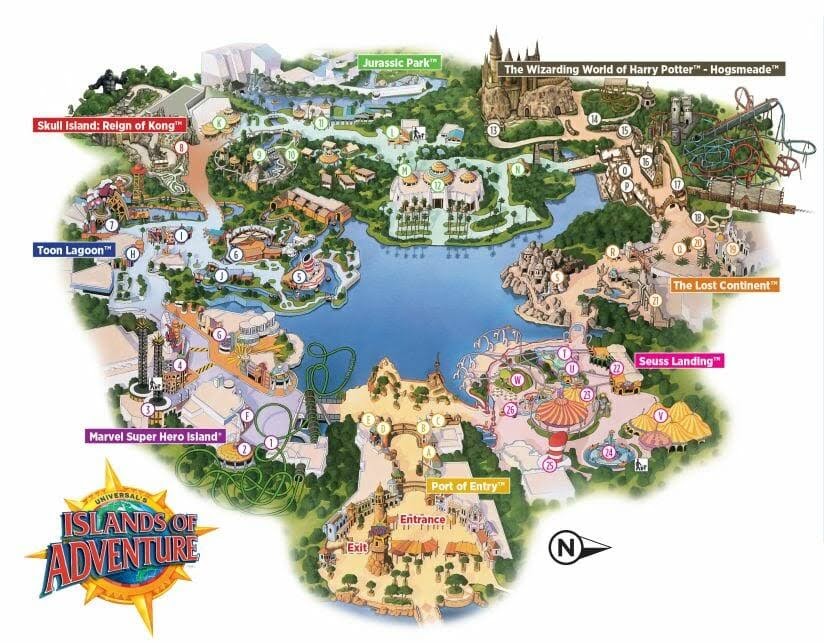 In Marvel Super Hero Island, we zoomed past the Incredible Hulk Coaster (video), Storm Force Accelatron (video) and Doctor Doom’s Fearfall (video). Watching each ride and listening to the screams was as close as I wanted to get to any of these rides. But watching this video on how they designed and built the Incredible Hulk Coaster was totally fascinating! Rob says he might like to do the Hulk ride next time.bet he’ll be by himself!

Amazing Adventures of Spider-Man
Wait time: 15 minutes. Our rating: 8 out of 10 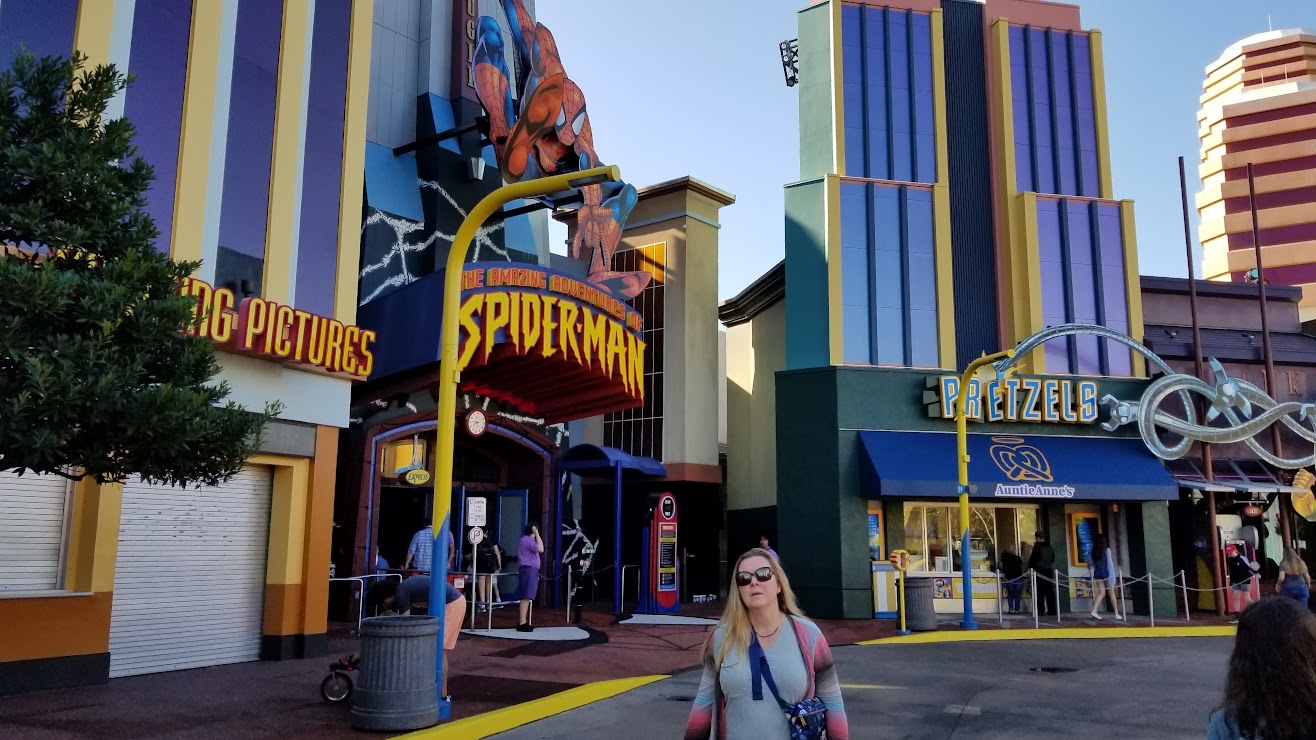 Donning our 3-D glasses for the high flying virtual reality ride, we were dropped into scenes from a comic book, soaring above the streets, scaling skyscrapers and battling bad guys left and right in pursuit of the villains who stole the Statue of Liberty (ride video). Want to see how they made this ride? Check out this video. 4D Motion Simulator.

Skull Island: Reign of Kong
Wait time: less than 10 minutes. Our rating: 8 out of 10 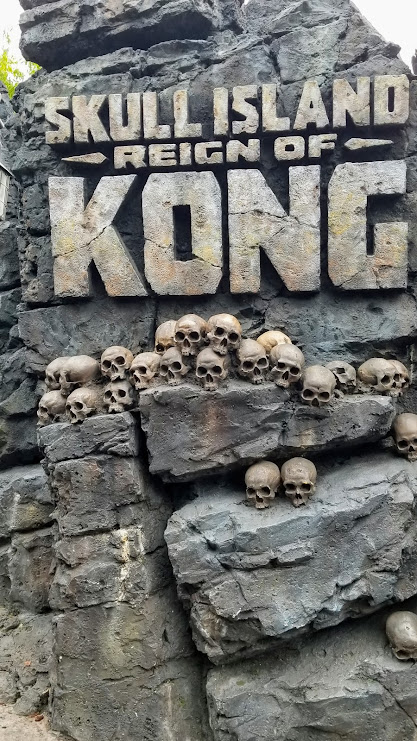 Ever hear of a Megaprimatus Kong which is an ancient species of giant ape approximately three stories tall and 18 feet wide at the shoulders, with a head larger than an automobile? We hadn’t, at least not until we ventured onto this ride. Traveling on this mysterious island, through the jungle, we not only encountered Kong but giant bats, dinosaurs and other prehistoric creepy creatures. Sure was glad when it was over and we were back out in the sunshine! A tram ride combined with real motion synced to video effects.

Poseidon’s Fury
Wait time: less than 5 minutes. Our rating: 7 out of 10 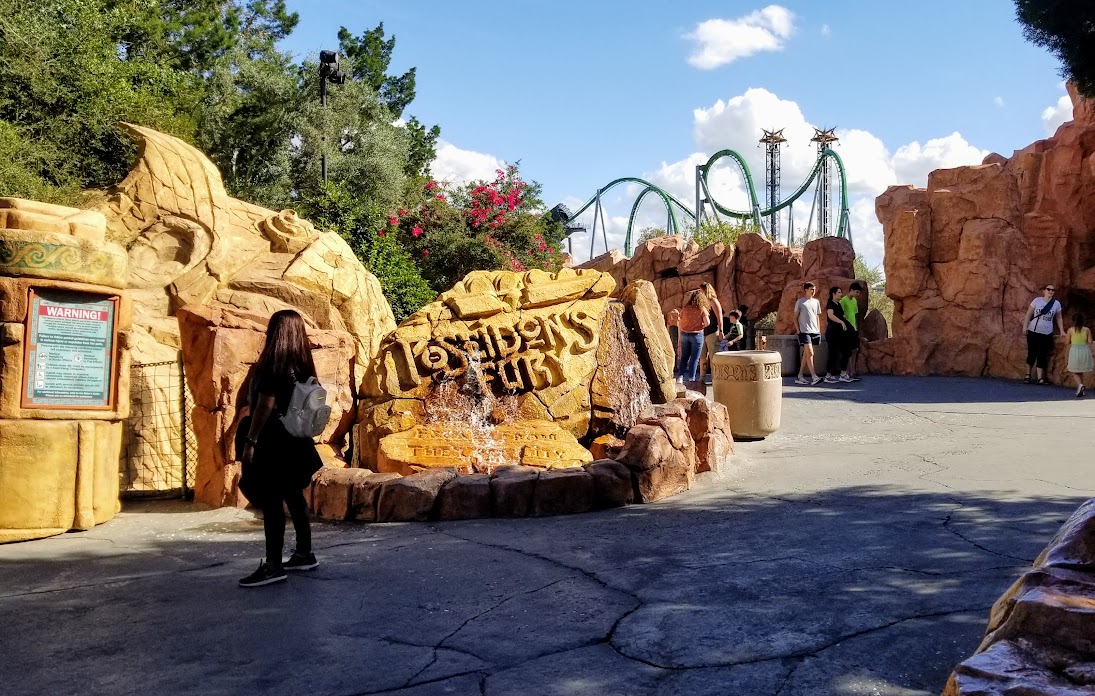 Last but not least, an archaeologist guide led us on an expedition into the darkened ruins of the ancient Temple of Poseidon, Greek god of the sea. Here we found ourselves caught in a colossal battle between Poseidon and the evil Lord Darkenon. This attraction has undergone some changes since our first visit here in 2007. It was good but didn’t seem quite as good as the one we saw back in 2007. Here’s a behind the scenes video showing the construction of the original version. This is a Live Action show with several stages, requires standing and walking through the various events.

Want to get wet? We didn’t! But if you do, there are two rides that will satisfy that desire. Riders were screaming as they got soaked when the flume logs plunged 75-feet down the track. Actually Dudley Do-Right’s Ripsaw Falls Flume was closed for maintenance during our visit. Not comfortable staying wet, dry off (for a fee) at one of the nearby human sized drying machines. For anyone interested in how these rides were created, check out this video.

Next Up – Harry Potter and the Wonderful World of Wizardry

This is an amazingly detailed themed area encompassing several of the newest rides across both parks which were some of our favorites – read all about it in our next post!