Goodbye, St. Augustine! Hello, Orlando! Time for a visit to the theme park capital of the world! No visits to see Mickey this winter though, it was time for something different.

A rendezvous with Harry Potter at Universal seemed like it would be more fun! 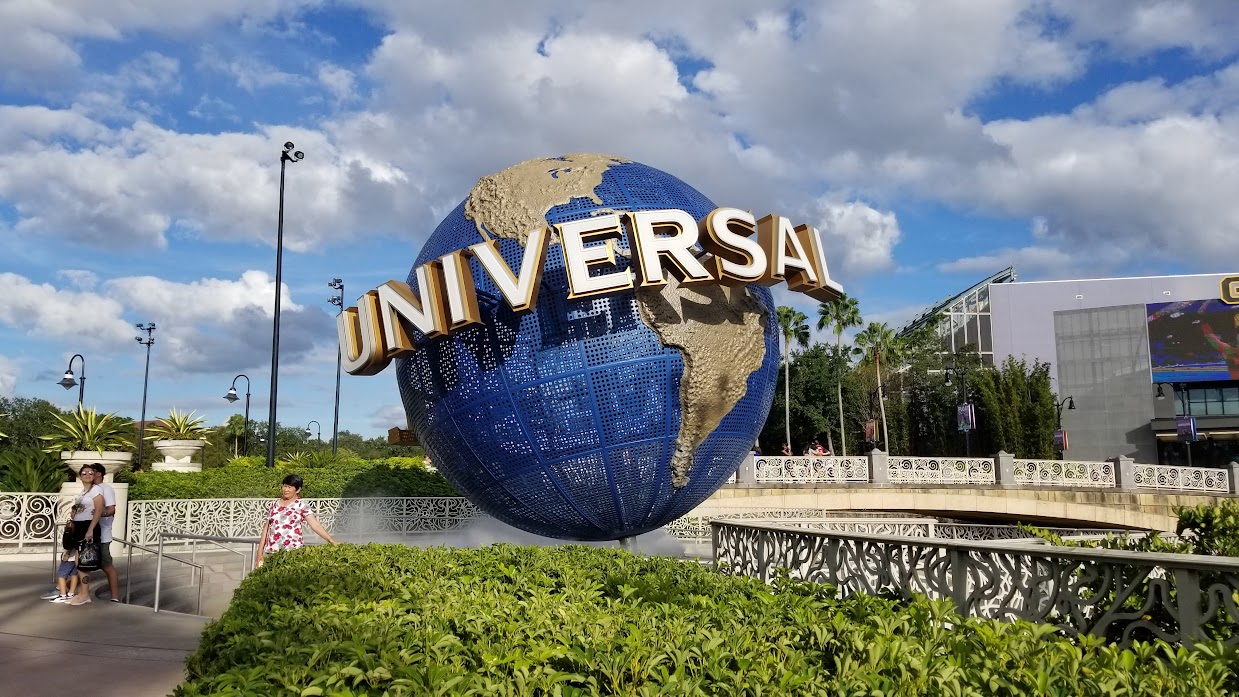 Time for these muggles (persons who lack any sort of magical ability and were not born in a magical family) to wave a magic wand, ride the Hogwarts Express, tour the School of Witchcraft and Wizardry, fend off the Death Eaters and play a little Quidditch with Harry, Hermione and Ron. Last time we were here twelve years ago in 2007, the Wizarding World of Harry Potter was probably just a thought in someone’s mind.

Universal is comprised of three separate parks (with a fourth in the works): Universal Studios, Islands of Adventure and Volcano Bay (a water park). We weren’t interested in Volcano Bay, but we knew the Harry Potter attractions were split between both Universal and Islands of Adventure and would require a two park ticket – a ticket that allowed us to visit both parks on the same day (that’s a brilliant marketing strategy, eh?).

What finally enticed us to visit Universal was an email we received in September offering Florida residents (that’s us) – a two day/two park deal plus an additional two free days. That’s four days of unlimited visits to both parks for $219.99 per person or about $65 per person per day. Wow, non Florida residents pay $174 for a one day/two park ticket! And even better, there were no black out days plus the tickets could be used on non-consecutive days. The only real caveat was that we had to finish our visits by December 20th. Definitely not a problem.

Unlike Disney World which has Fort Wilderness Campground on their property, Universal does not have a campground. Boo hiss! After a little research, we found a city park, Bill Frederick Park at Turkey Lake, about 5 miles from Universal where we were able to make a nine day reservation. 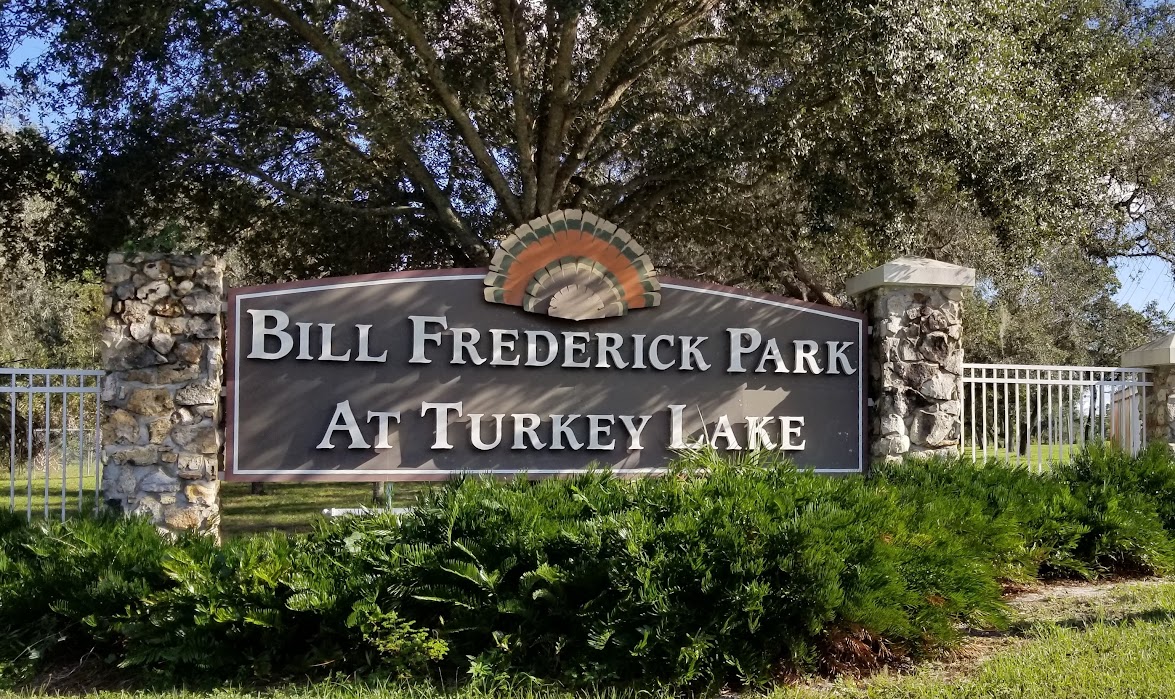 If you decide to stay here, don’t bother calling to make a reservation, they will tell you to fill out a form on-line, then they will call you. Unfortunately the full hookup site (#9) we were assigned at the time of the reservation wasn’t available for the entire length of time ($25). In the middle of our stay we had to move to another site (#16) which only had water and electricity ($20). Although it’s always a pain moving, it wasn’t a big deal except that it would kill a portion of a day when we could be out having fun.

After a two hour drive from Stagecoach RV in St. Augustine, we pulled into Bill Frederick Park in the early afternoon. 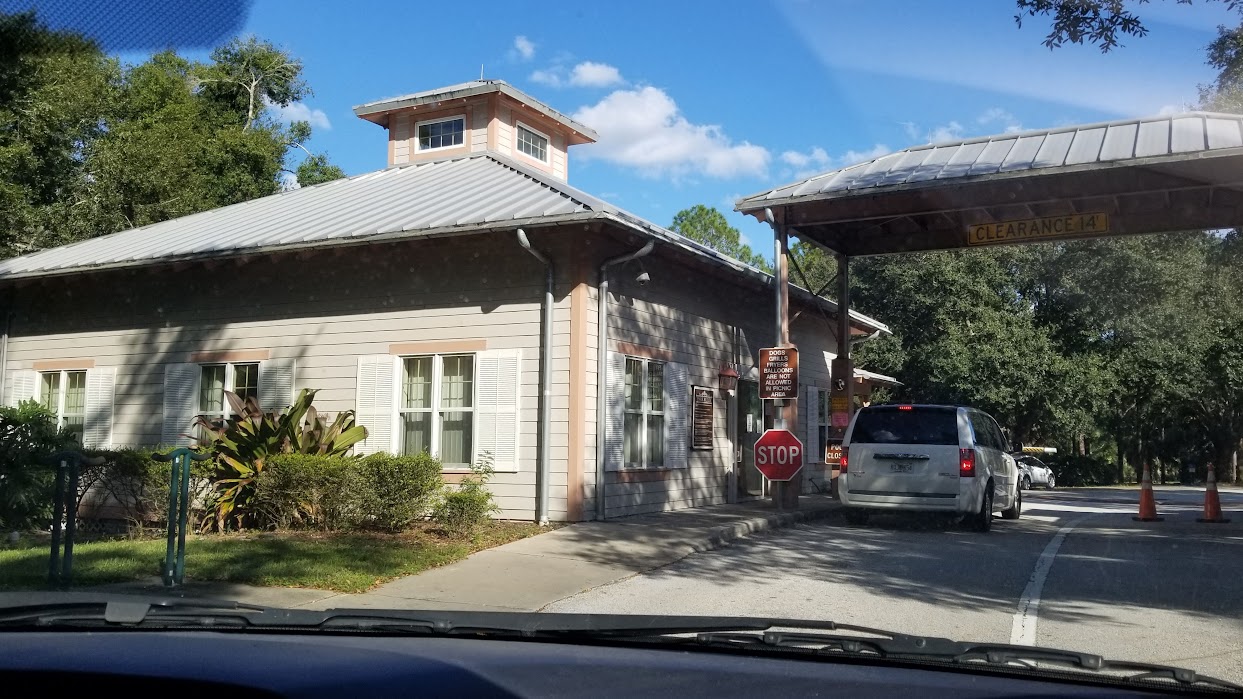 There is a small pullout just after the ranger station, but it was occupied so we didn’t stop to unhitch so after checking in, we headed directly to the campground, a distance of 3/4 of a mile on a narrow one way road. Hindsight says that it was probably just as well we didn’t unhitch anywhere else (keep reading, you’ll understand why). Just as a note, during our stay we discovered that parking lot #4 (where the children’s Farm House is located) has a large parking lot making it the perfect place to hitch/unhitch without blocking the roadway.

Covering 187 acres, the park is huge, is rated as one of the top-five fishing lakes in the state of Florida and offers a number of amenities: playgrounds, bike/jogging trails, paved walking trail, small/medium/large/xlarge pavilions, grills, picnic tables, fitness station, sand volleyball, disc golf, pump track (mountain biking), a dedicated drone flying area, boat rentals, swimming pool, and a fishing pier. We were so busy with Universal, we didn’t spend much time exploring the park except for driving through it. Fortunately it wasn’t very busy during our stay, but it must be quite crowded during certain times of the year. Overall, the park seemed like an oasis in the middle of Orlando suburbia.

Entering the camping area, the paved road was quite narrow and badly in need of repair especially along the edges. At least the sites weren’t crammed together and were nicely spaced. 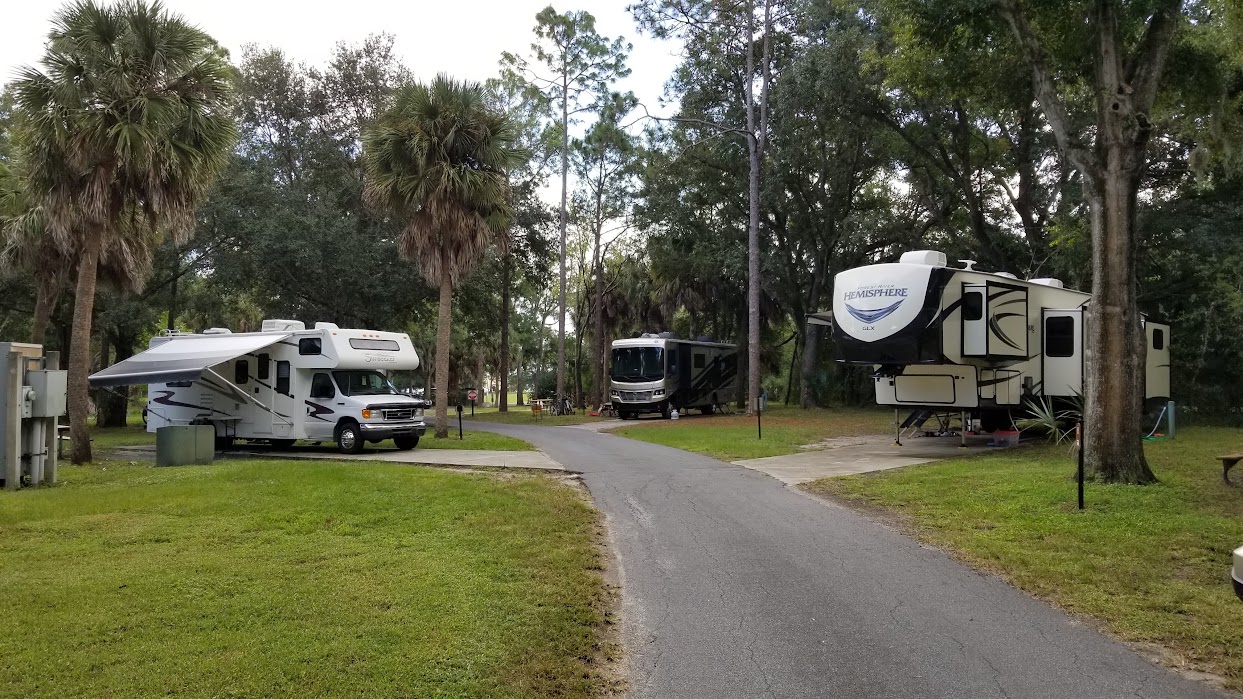 Stopping at our campsite, Rob jumped into action to unhitch since we were blocking the entire one way road. Once done, he went to move the van. Oh, no! The battery was totally dead – when I say totally, I mean totally! Not enough juice to even open the power sliding rear doors, no lights, nada, no nothing. What? How the heck did that happen????Just for these type of occasions, we carry a portable battery jump starter in the van. But alas, the car battery was so drained that it still wouldn’t turn over. Now what? In the midst of all this chaos, a very nice woman across the street came out offering her husband’s services to give us a jump. In the meantime, cars were waiting patiently for us to get out of the way so I was running back and forth explaining the situation. A guy in a truck offered to jump the van – yahoo, that worked! Once the van was moved out of the way, I directed Rob into the campsite. Whew, that was fun! NOT! Still don’t know what happened, never had the problem before. Precisely to prevent this situation, many years ago we installed a charging circuit in our tow cable and a “Toad Charge” regulator in the car. Rob checked it all out and all was OK, but suspects perhaps there may have been a bad connection in the tow cable connectors – those were cleaned and tightened. It’s been fine since. 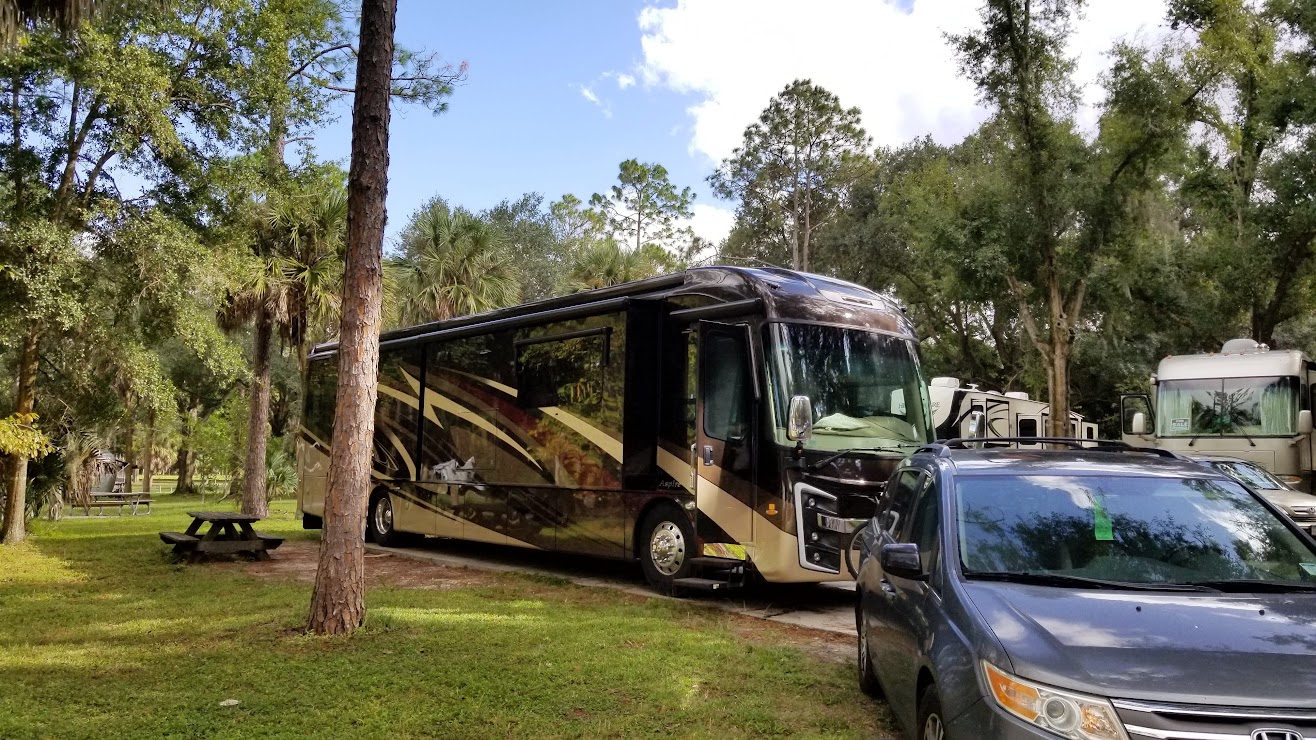 As mentioned previously, for the first four nights of our stay, we were on a FHU site #9. But on Wednesday, we had to move to site #16, water & electric only. Unlike other parks we have stayed at, we didn’t have to go to the office on the day of the move to recheck in. We were told that as soon as the next site was available we could move to it. Check out time was 11:00 am so we expected the van that was staying on site #16 to be gone by then. But nope, at 10:45 am he was in the process of cooking their breakfast on a grill. Chairs and other paraphernalia were still out, an indication that he was not going to move anytime soon. A phone call to the office didn’t do much good, apparently they don’t enforce the check out time. Around noon time, he left – we saw his van on a different site so apparently he was waiting for the occupants of that site to vacate before he could move. Musical campsites…

It was after 1:00 pm by the time we finally got into the new site. The site was okay, although very unlevel (over 12″ elevation change front to rear) and it had more trees so the satellite reception wasn’t as good as what we had on site #9. Even more annoying was the fact that site #9 stayed vacant for the remainder of our time at the park. Wish we had known about the cancellation, but probably our own fault for not checking. Oh, well…. 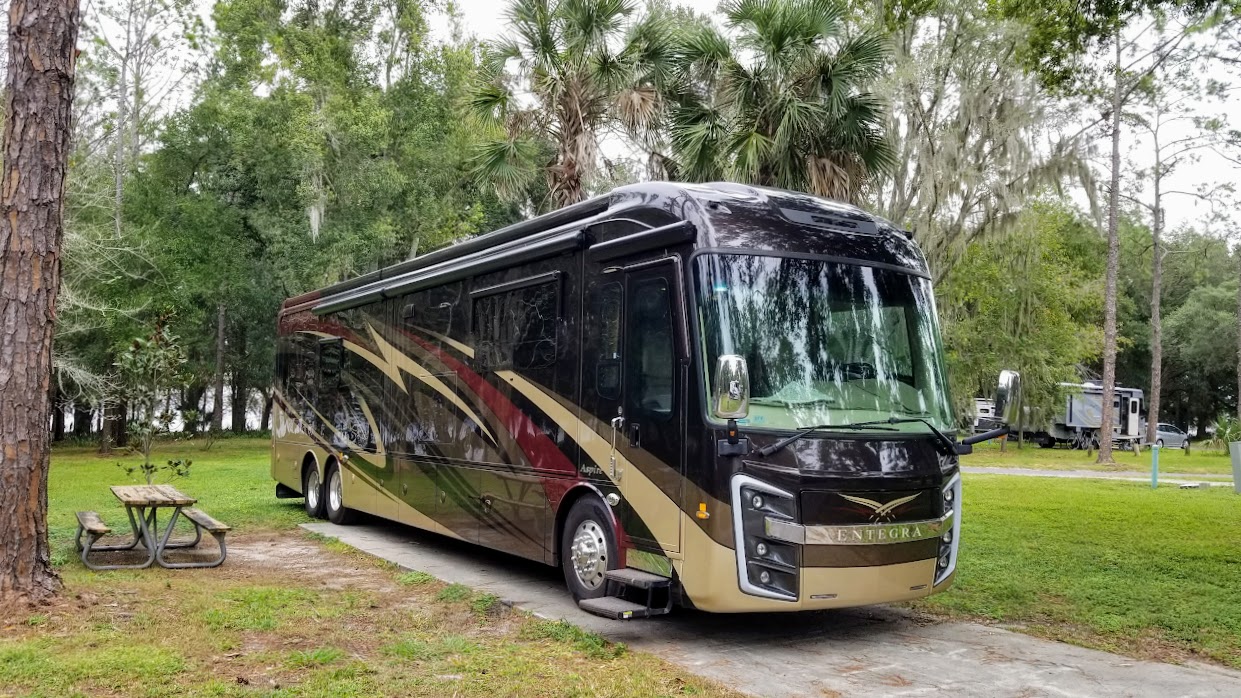 Continuing along the one way road to exit the campground area in our van, we were surprised by the location of the dump station. One camper was using the dump station while another was waiting. No separate pull out for them so they had to park in the middle of the one way exit road. Huh? We sat for a few minutes trying to determine if we could get around them. Driving on the grass and dodging trees was the only option. That was poor planning on the city’s part! 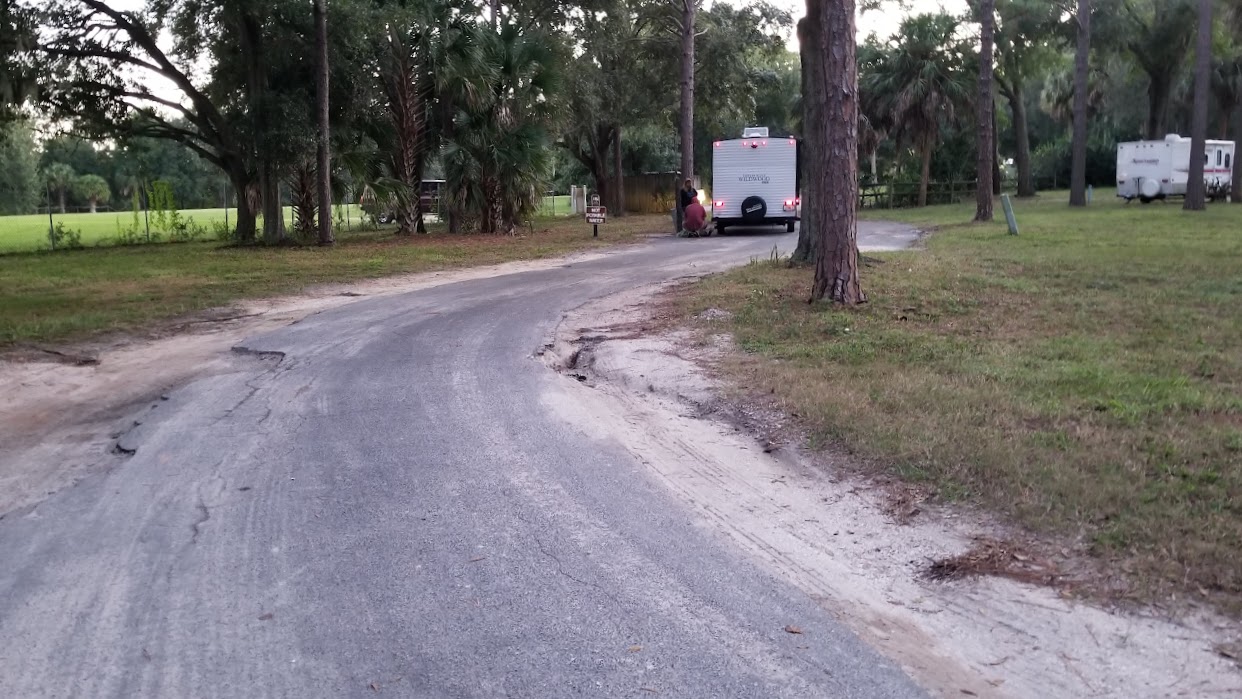 Overall, the campground was decent except that the roads were seriously in need of repair, or at least a little gravel to smooth out the deep ruts. But due to it’s close proximity to Universal and the cheap rate, we would stay here again.

Since it’s been quite a long while since we read the Harry Potter books and we hadn’t seen all eight movies, in prep for our visit we started on a Harry Potter movie marathon that spanned several weeks. How enjoyable (and worth while) that was! Great viewing them in succession. Fun watching Daniel Radcliff (Harry), Emma Watson (Hermione) and Rupert Grint (Ron Weasley) change from pre-teens to adults before our eyes over the span of 11 years. We finished the last movie just after we arrived in Orlando. So we were ready to become wizards!

Our plans to visit the park were contingent on crowd levels, needing to move on Wednesday and the weather forecast so we ended up visiting the park on Monday, Tuesday, Thursday and Friday. Visiting any theme park is exhausting so taking Wednesday off, gave us (and our feet) a much needed rest.

But more about that later! Stay tuned for some fun!