No we weren’t headed for THE SUPERBOWL (how cool that would have been!) instead we were once again headed to the Tampa RV Supershow held from Wednesday, January 16th to Sunday, January 20th. I said once again because we were there in 2015 and 2016.  We were leaving Disney on Saturday, January 12th and we didn’t have to join the Entegra Coach Owner’s Association (ECOA) rally at the Supershow until Tuesday morning. So what did we do between Saturday and Tuesday?

Well, the good news is that thankfully I won’t need to bore you with any more root canal stories (yes, I can hear your collective sigh of relief). We had reservations at Lake Louisa State Park again on the same site (#9) as on a recent previous visit.

Before heading there though we needed to make a detour to Clearwater for a 9:00 a.m. appointment to have a split (and leaking) coolant hose replaced under warranty at the newly opened seasonal Spartan shop. Open Monday – Fridays 8:00 a.m. to 5:00 p.m. through March 29th, the Spartan techs there will perform preventative maintenance and repairs on any Class A diesel coach. If services takes more than one day, they even have a couple of overnight sites with water and electric and a dump station! If you need something done on your chassis and you happen to be in Florida until the end of March, this is the place to go! You can schedule an appointment online or call 1-866-383-3695 (option 2). Also note the Spartan bay is on the premises of Complete 360 RV which is owned by a couple of Entegra customers. Great one stop shopping if you need other RV repair work done as well! 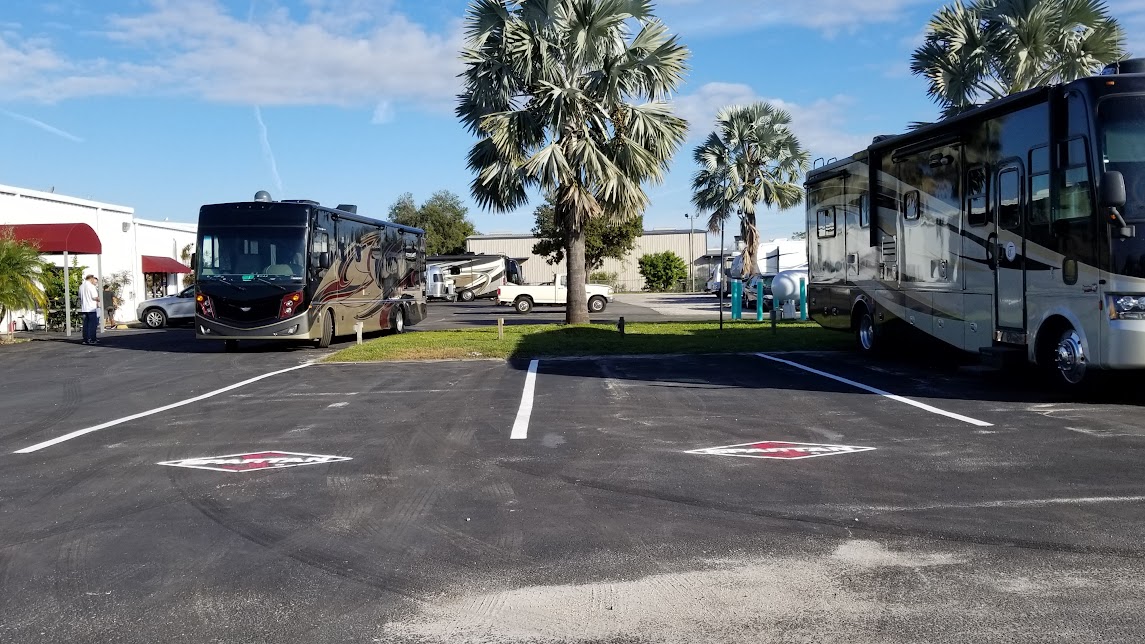 Leaving Disneyworld early Saturday morning, we had to weave our way through back roads as it was Marathon weekend and many of the main roads around the park were closed. Since Clearwater is on the east coast this jaunt would take us about two hours out of our way, but even with that it would still be a lot more convenient than trying to find some other place to fix the problem.

Glad that our appointment was on a Saturday as we had to drive through Tampa and even on a Saturday the traffic was quite heavy.  Besides traffic it was an uneventful drive. As we entered the driveway for Complete 360 RV at 4455 Ulmerton Road, we were a little confused – in front of us was a U-Haul building. Sure didn’t look like an RV service facility. Unfortunately, we didn’t see the signs directing us to turn to the right so we headed straight ahead. Whoops! That sure didn’t look right! We had to turn the coach around once we realized our mistake but Rob handled it expertly. Once on the correct side of the building, we quickly spotted where Spartan was located in the very last service bay. 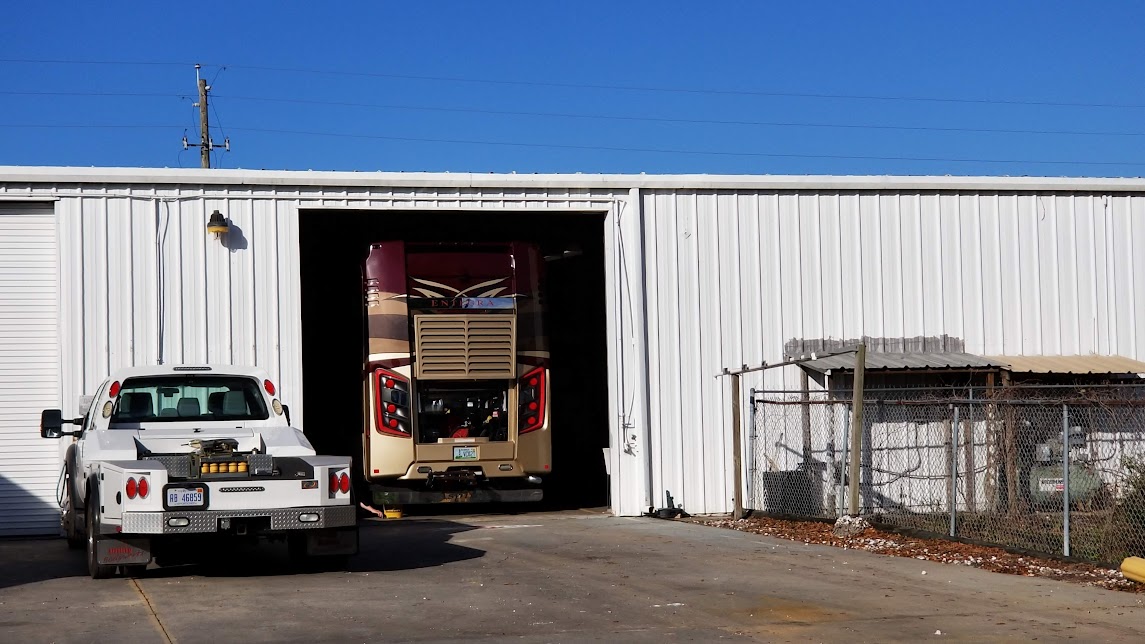 After explaining our issue to the tech, we headed out to a nearby local restaurant, Kimmy D’s where we had a decent breakfast. Returning back to Spartan about an hour later, we were surprised and very pleased that the repair was already finished so we were all set to go! Woohoo!

Back on the road again, we headed back to Lake Louisa State Park in Clermont.  Nothing much to report during our short three night stay there.

On Tuesday we headed out from Lake Louisa State Park a little after 9:00 a.m. so we would arrive at the Tampa Fairgrounds by the ECOA designated 10:30 arrival time. Based on our previous experience in 2016, we suspected that it would be a case of “hurry up and wait”.

Yep, that it was! Lots of waiting with me in the car (we had to unhitch) and Rob in the coach. With over 100 Entegra coaches registered for the rally, and many other brands and groups, it was an extremely slow process getting everyone parked. A certain number of coaches (perhaps about 15) would be led to the designated ECOA field area where a team of rally volunteers would supervise the parking of those coaches in zipper style. Once everyone was parked, someone would return to the wait area to lead another group of coaches to the field. Think we waited in line about 2 hours and there were more coaches to park after us. Long day for everyone! 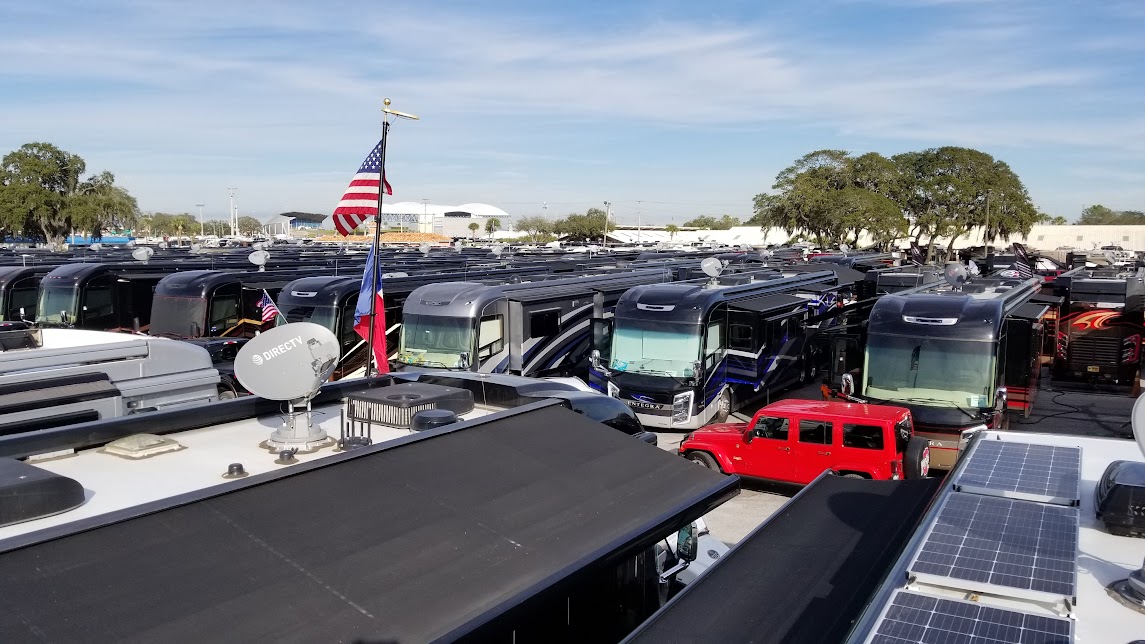 Yippee, finally, it was our turn! Unfortunately, the guys overseeing the parking goofed and didn’t leave enough space between us and the opposing row. There was another row of Entegra coaches facing us but the lane in between didn’t leave room for both rows to park their cars and still have a fire lane.  We had to park elsewhere a good distance away. Heaven forbid if there was an emergency and someone had to leave in their coach – there was no way out! With a forecast of severe weather on the Sunday that the rally ended, I had suggested to Rob that perhaps we could leave on Saturday. HA, fat chance that was going to happen! As it turned out though the chance was indeed fat and we could have left late on Saturday as space opened up behind us. We nevertheless elected to stay since our spot was already paid for. 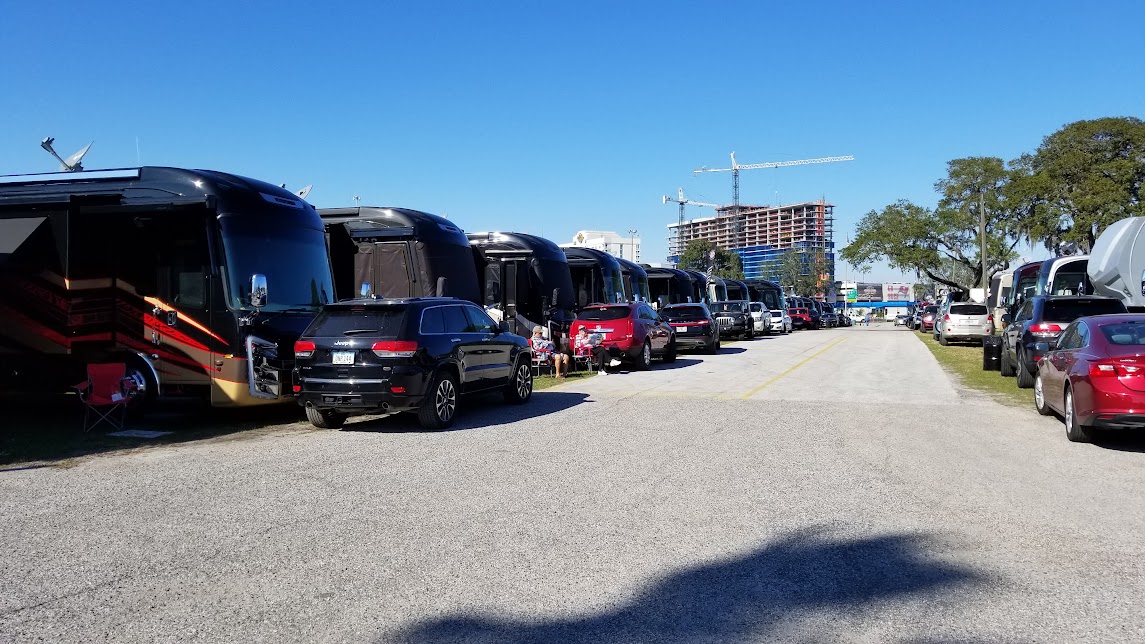 As we walked around the Entegra rally area, we were surprised at the number of people we didn’t know! Guess that makes sense, with over 5000 Entegra’s on the road today, there are a lot of new members of the Entegra family. Back in 2013, when we bought our first Entegra, there were barely 800 coaches on the road and when we attended a rally or went in for service, we knew almost everyone. My how things have changed!

On Wednesday, the show opened and we were off, flitting between Entegra, Fleetwood and even, just for fun, the multi-million dollar, high end Newell, Prevost, and Foretravel coaches. And of course we had to peruse all the offerings in the vendor buildings to see if there were any new and exciting products. The bad news, there weren’t (at least that we were interested in), the good news – we didn’t spend any money. No new coach, no new products and no new kitchen gadgets (a few were tempting but not impressive enough to purchase any)!

One very positive shout out to vendor Truck System Technologies. These folks embody some of the best customer service we have experienced in our RV lifespan. We have been using their 507 Tire Pressure Monitoring System since 2010 and have 12 sensors (8 for the coach, 4 for the Odyssey). The tire pressure sensors have replaceable batteries and work great, but Rob had two that somehow lost their protective caps exposing the electronics to the weather. We stopped by the TST booth to see if we could purchase a couple of new caps, but the gentleman there just gave two brand new compete sensors! Wow. Thanks TST! And that’s not the first time they have helped us out for no charge.

On Wednesday night, Entegra hosted their customer appreciation dinner at Armature Works, a building that dates back to 1910 which was once the storage and maintenance facility for Tampa Electric’s (TECO) streetcars. Today this 73,000 square foot mixed-use commercial space consists of the Heights Public Market, multiple event spaces, a co-shared workspace as well as multiple restaurants and bars. 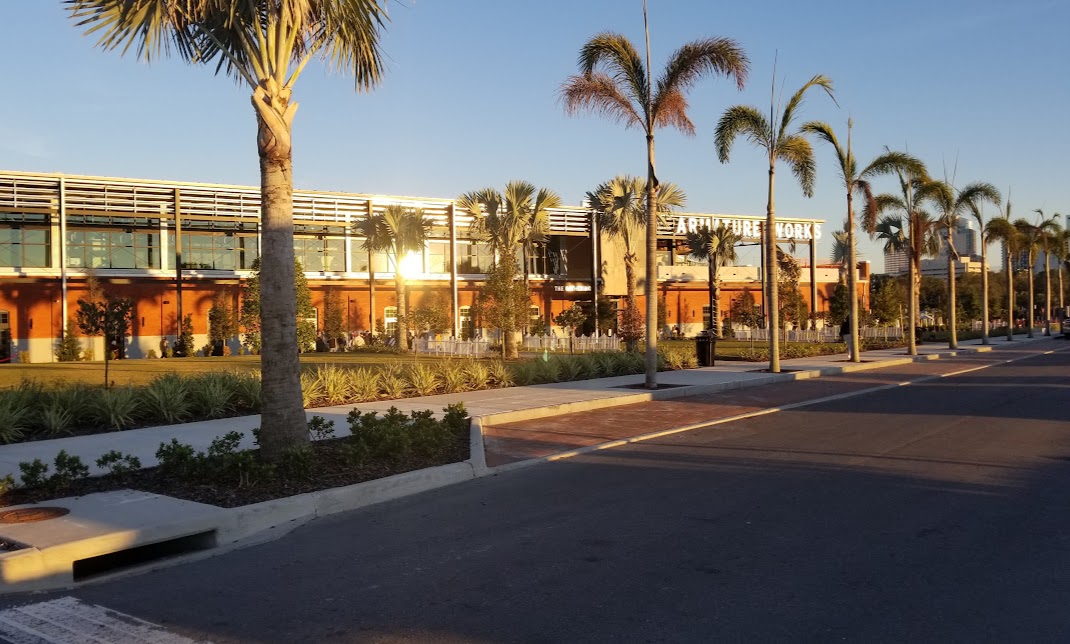 Anyone who had purchased two or more Entegras were given early entrance where we could enjoy a complimentary full bar (beer and wine was available during dinner for everyone). 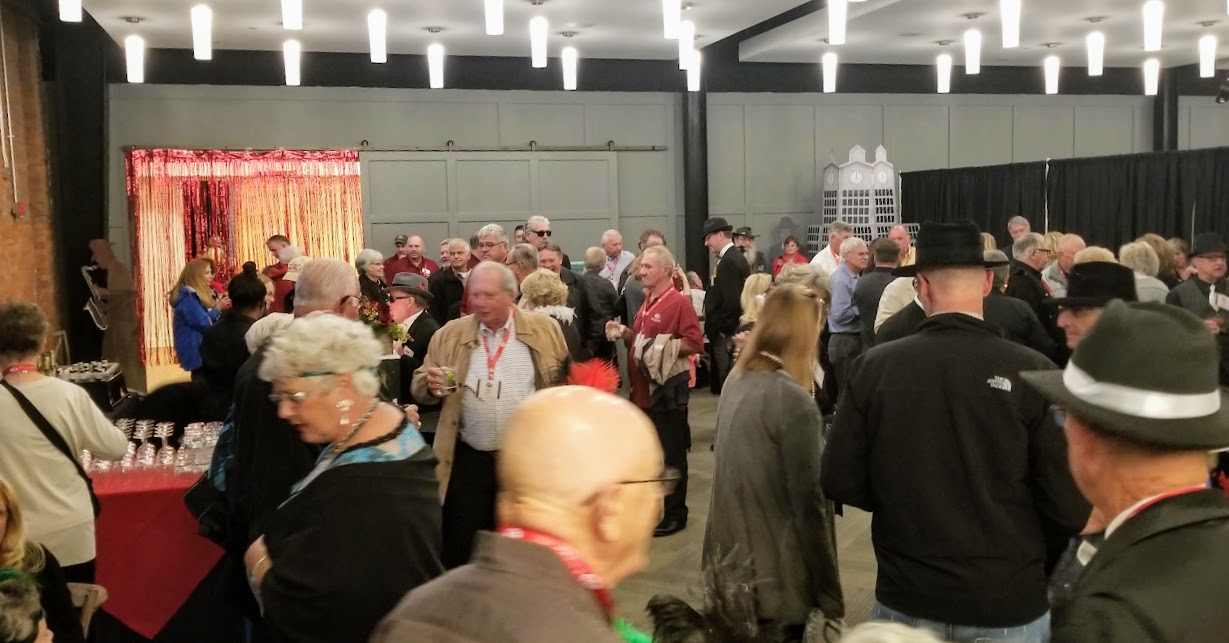 Once everyone was seated, there were the usual speeches by Entegra management but it was difficult to hear what they were saying due to the acoustics in the room. The highlight of the evening however was the much deserved award presented to Joyce Skinner, the much loved Director of Customer Service, for her commitment and dedication to the owners, employees and vendors. We’re hoping she never retires as we don’t know what would we do without Joyce! 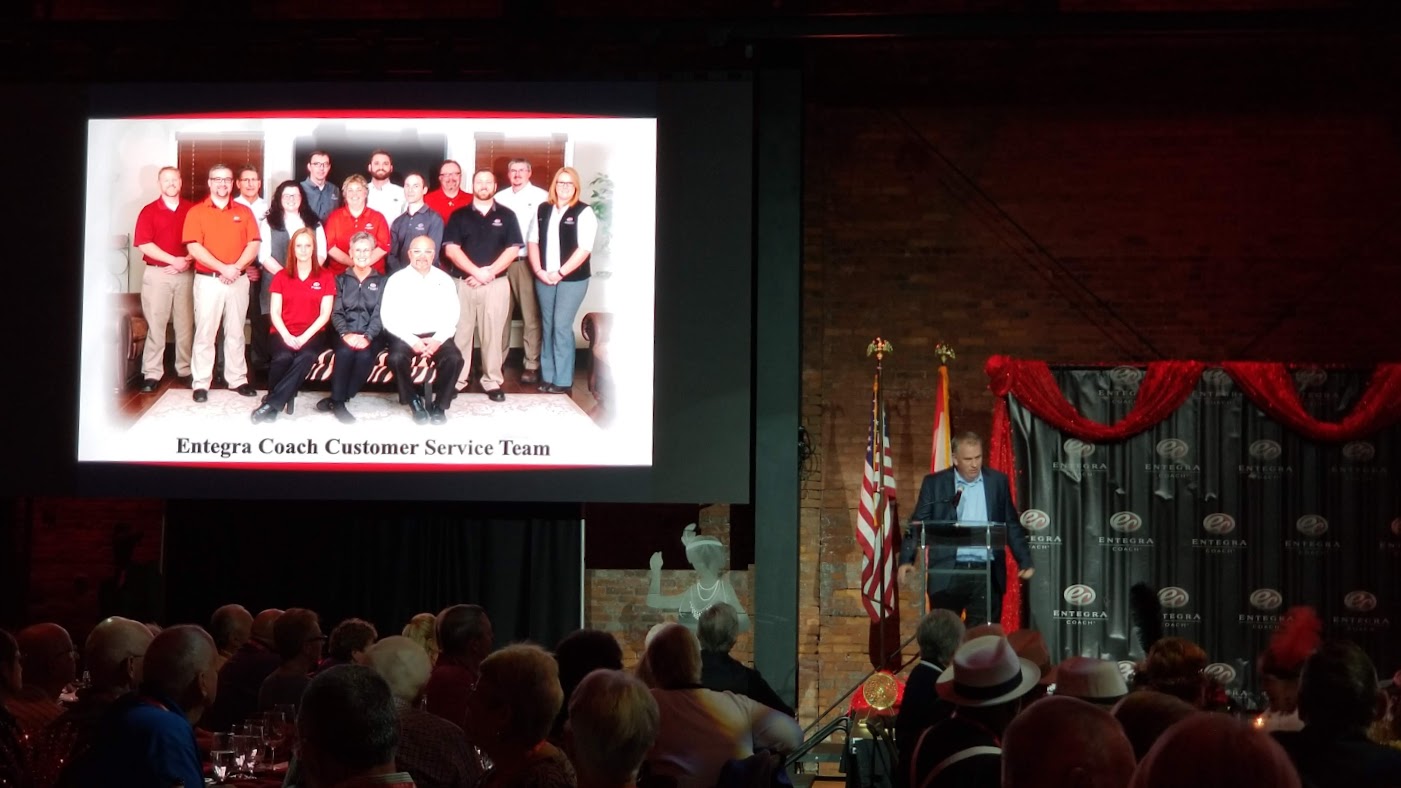 Dinner was quite good. Salad was served at the table followed by a buffet where charred brussel sprouts with pancetta, risotto style couscous, roasted fingerling potatoes with parmesan and parsley, grilled breast of chicken with a champagne, caramelized onion and smoked gouda cream sauce, and rosemary and garlic marinated flank steak were offered. For dessert, citrus cheesecake and chocolate fudge cake were served at the table.

The theme of the dinner was a murder mystery at the speakeasy so women were decked out in flapper dresses, zoot suits, feather boas and headbands and men dressed like either gangsters or detectives strutted around in their pin striped suits and fancy fedoras. In keeping with the theme, each table was provided with clues and asked to work as a team to solve the mystery. In the meantime, several actors were setting the scene for the murder on the stage. 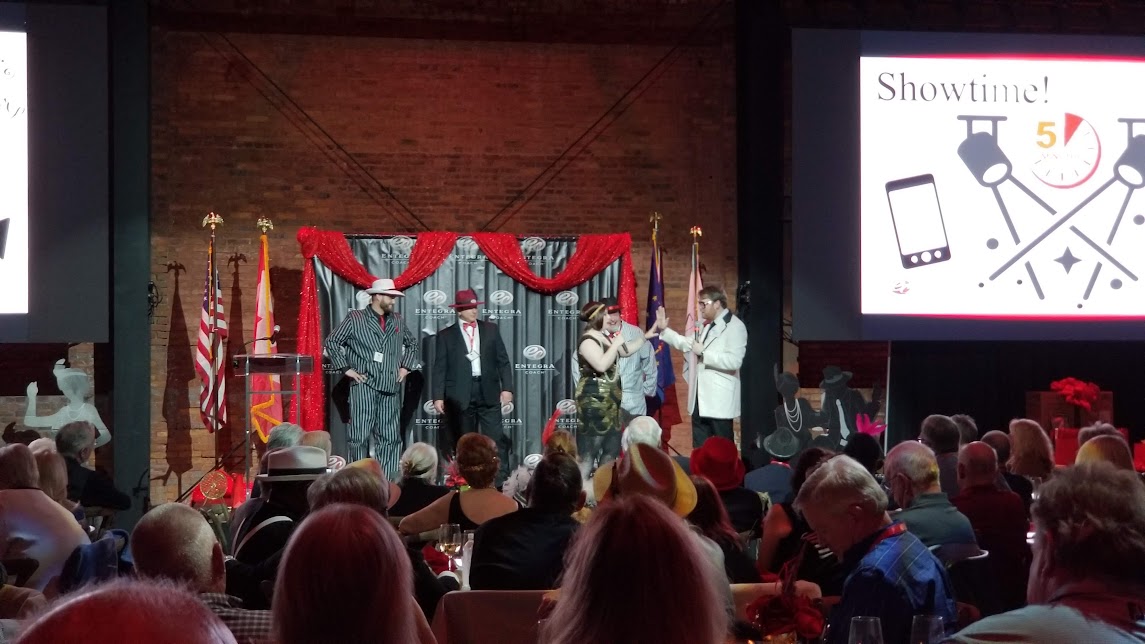 Wish I could say that the entertainment was as good as past performances at other appreciation dinners but unfortunately it lacked something. About halfway through the show, people started leaving. We did as well – Rob had a very bad cold and was having frequent coughing fits so we left early. We learned the next day that Joyce Skinner was the murderess!

On Friday night, Lazy Days sponsored a BBQ held in the ECOA rally area. Usual assortment of food – pulled pork, brisket, baked beans, cole slaw, etc. A good time was had by all! Thanks Lazydays!

Before we knew it, Sunday, our departure day, had arrived. We were ready for some relaxation! Stay tuned for our next stops!