Ah yes, our catnap worked wonders! As mentioned in our previous post, our Tuesday morning visit to the Animal Kingdom had already been a pretty exhausting day, but now we were feeling a bit refreshed it was back to Pandora again to see it transform into a gorgeous glowing wonderland as darkness approached. When we arrived at 5:30 p.m. it was still fairly bright, so while we were waiting for it to get darker we stopped at Pongu Pongu to snack on two Pongu Lumpias ($3.29), a pineapple cream cheese spring roll. Messy to eat but very tasty! 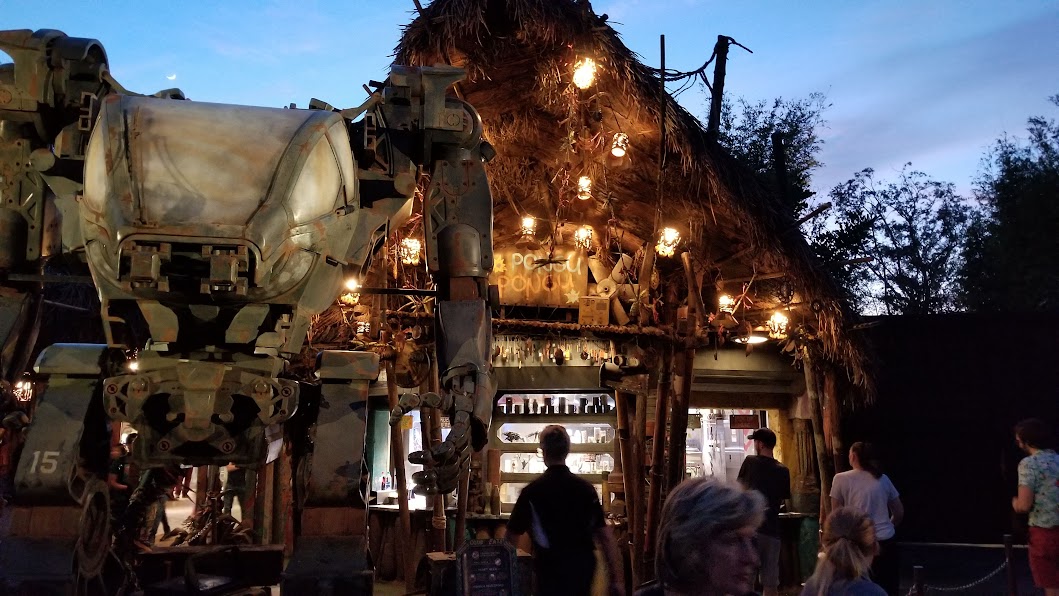 Pandora was beautiful during the day but as darkness encroached, it was transformed into a shimmering bioluminescent landscape, aglow with vibrant hues of green, blue, indigo, and violet bathing everything in an ethereal glow! 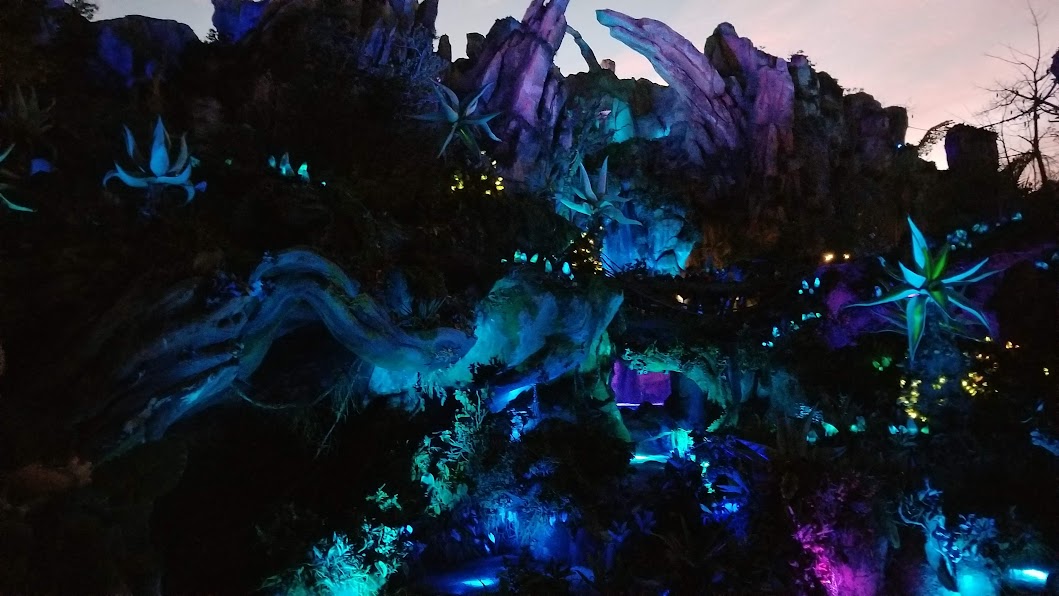 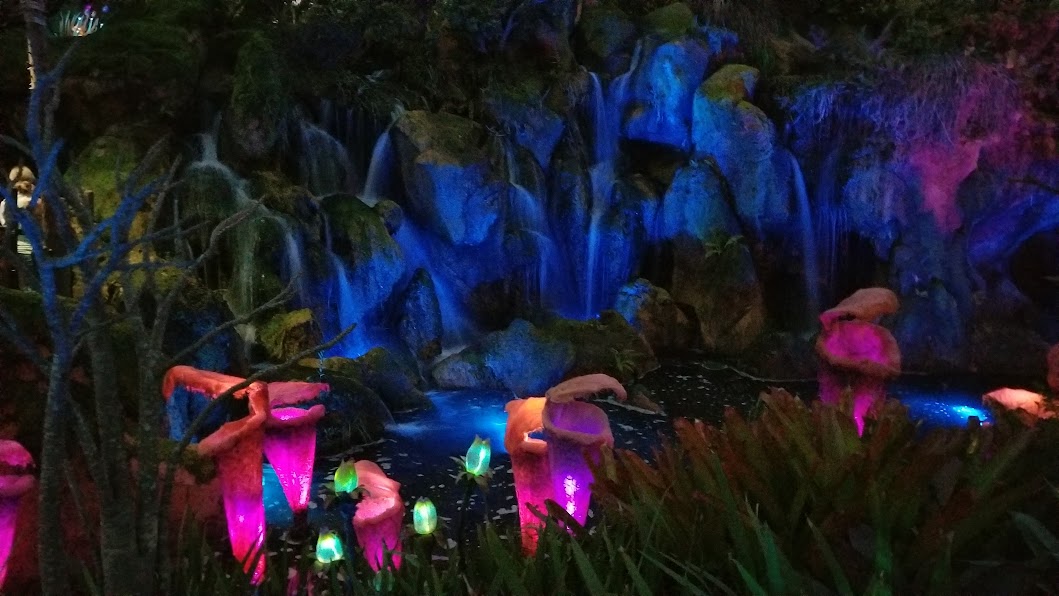 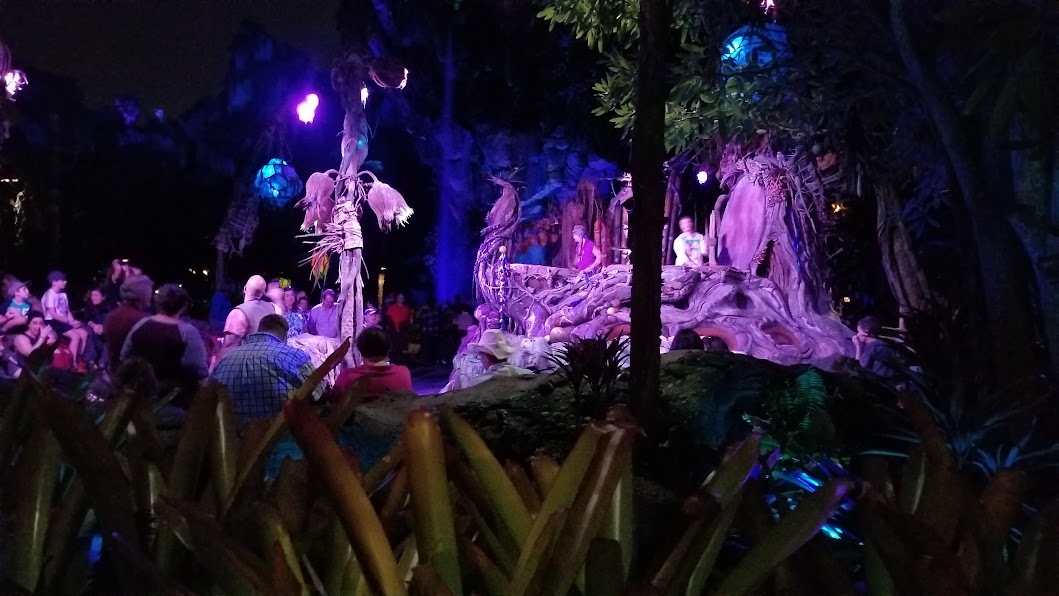 Even the walkways, charged by sunlight and reinforced by black light reacted with phospherence as we walked! 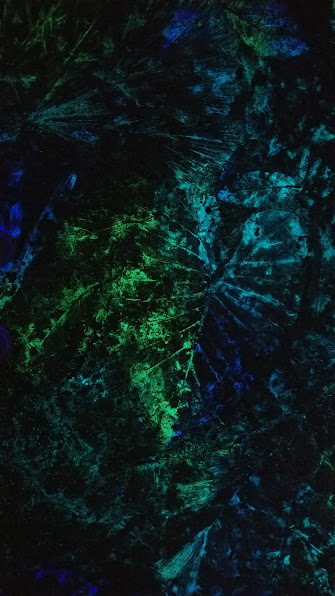 Around 7:30 p.m. we started to meander out of Pandora and back toward the center of the park, stopping at the beautifully lit up Tree of Life. Animal Kingdom has never been open at night during our previous visits so seeing it all lit up at night was a first for us. 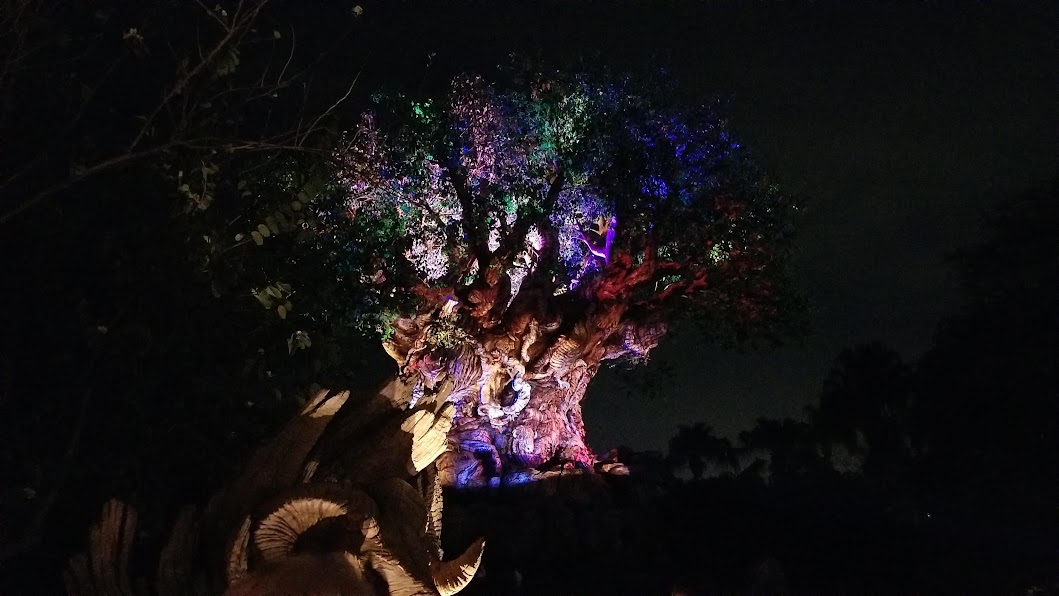 Suddenly music started playing, the tree came to life and the animals normally entrenched in the tree during daylight were awakened. Fireflies, hummingbirds, tigers, does, fawns and other creatures danced across the tree against a backdrop of various woodland scenes. Very difficult to take videos or even pictures to capture how beautiful it was but here is a video created by another Disney visitor available on YouTube.

If you go to Animal Kingdom we strongly recommend taking the time to make a return visit at night, even if it’s just to walk around.

We eventually dragged ourselves away from the mesmerizing light shows playing out on the Tree of Life – it was a long trek back to the entrance where we took the tram to our section of the parking lot, then walked to the car. And the night was still young!

Our next stop was Epcot where we would have an opportunity to enjoy Extra Magic Hours, offered only to visitors staying on a Disney property. The park was scheduled to stay open until 11:00 p.m. instead of the usual closing time of 9:00 p.m. and with the attendees limited to those with a room at a Disney property, the crowds would subside substantially. 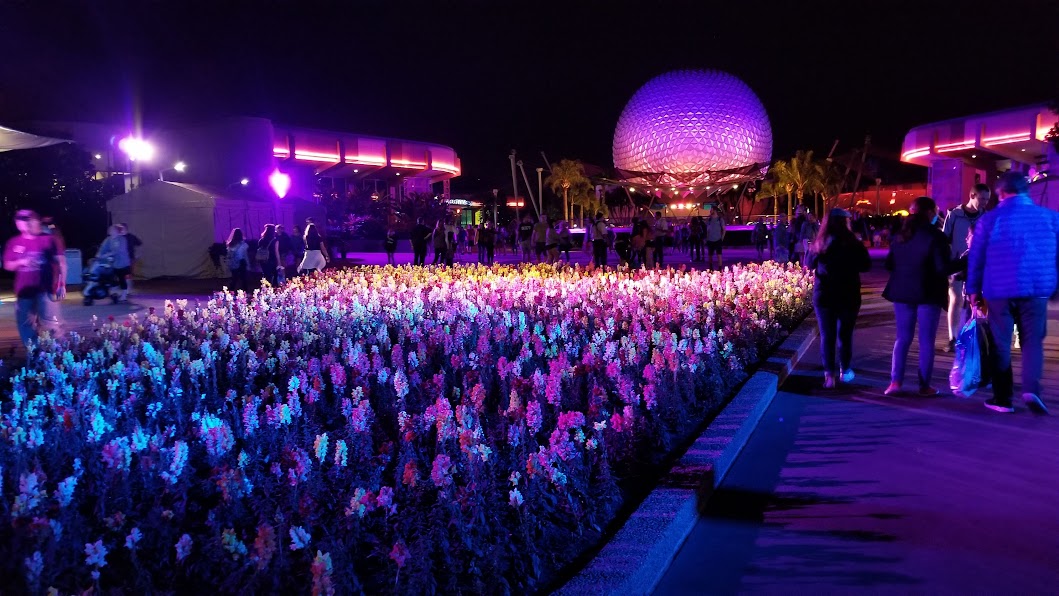 Although we have been here many times before, our journey started as soon as we walked through the entrance. At Spaceship Earth, we were blasted off in a time machine traveling from the Stone Age to the computer age and into a world of the future! 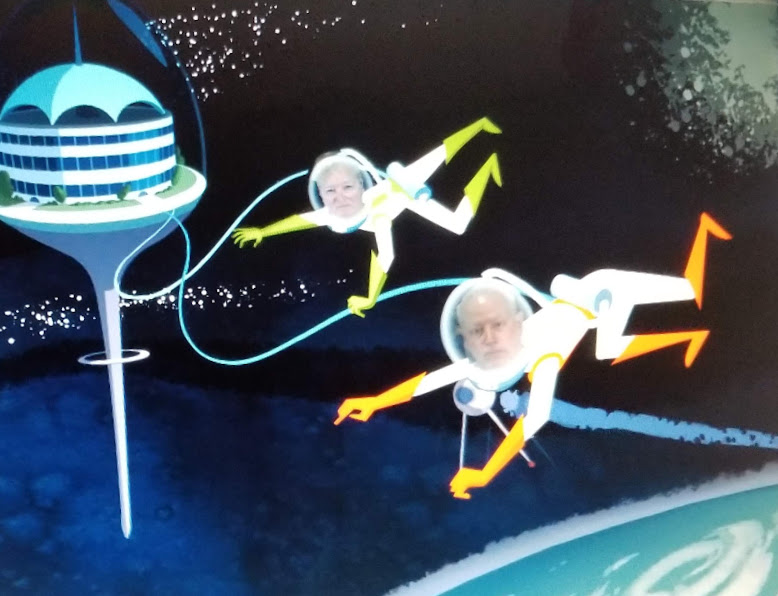 I could have happily bypassed this particular ride but to keep hubby company I reluctantly agreed to participate with him. It’s definitely not my favorite attraction because it seems pretty outdated to me. The good news (at least in my mind) is that this attraction is slated for a much needed major overhaul – it will be closed for 2 years from early 2020 to 2022.

It was a direct non-stop hike from there to the World Showcase where we enjoyed the Gran Fiesta Tour Starring The Three Caballeros in the Mexican pavilion while waiting for the Illuminations show to begin. 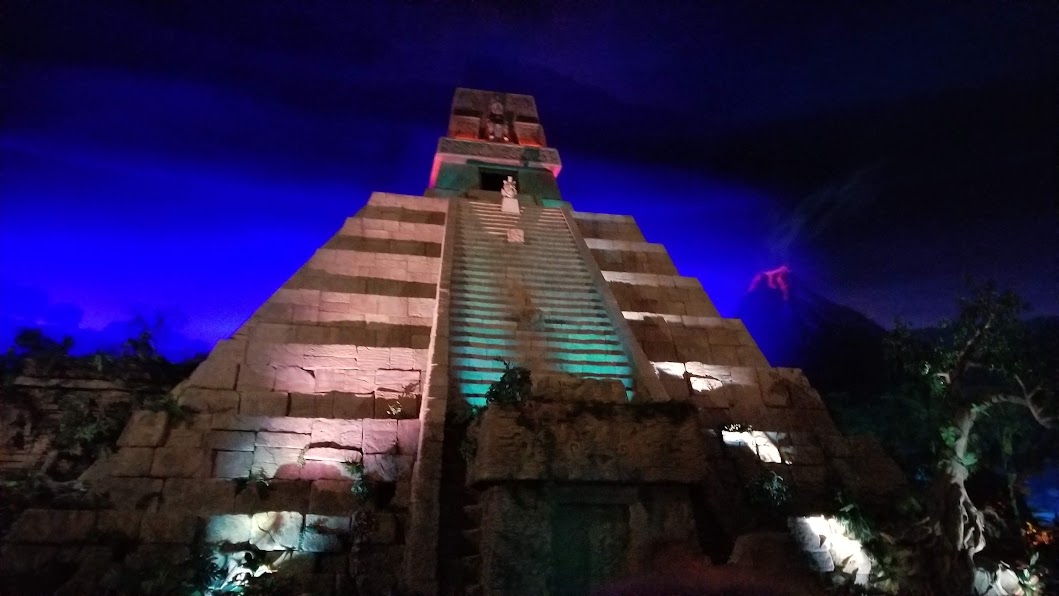 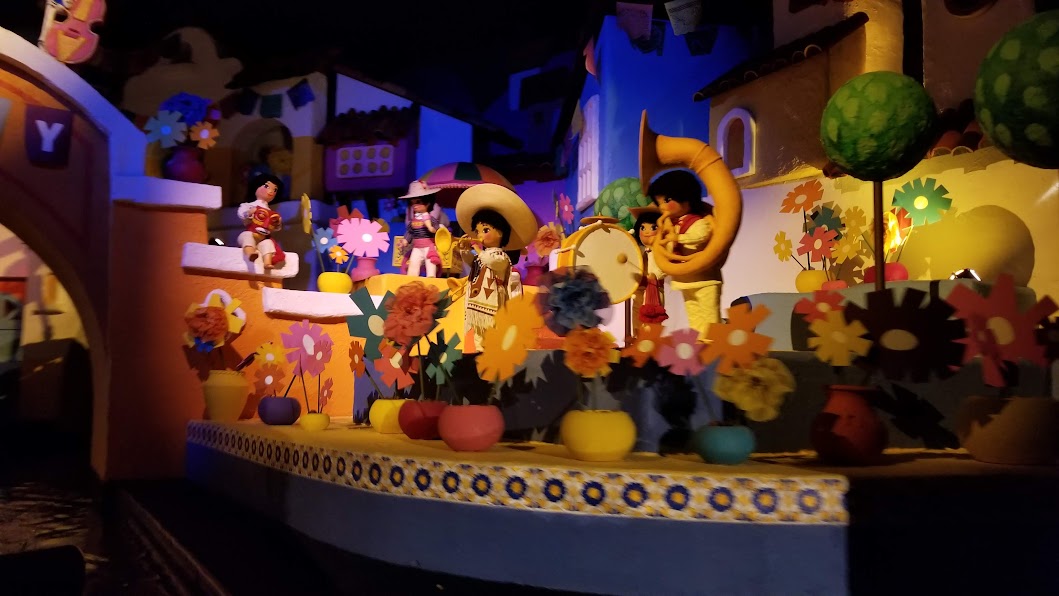 Next we made the short trek to the Norway pavilion where the viking themed boat ride, Maelstrom, has been replaced with Frozen Ever After.  Once on board the boat, we were whisked away for an on-the-water journey from the docks of Arendelle, to North Mountain where Queen Elsa’s enchanting ice palace is located! As the various songs from the movie played, everyone on the ride joined in. Guess we’ll be humming “Let It Go” for a few days! Pretty neat ride with some unexpected twists and turns! Want to see it? Check out this video!

After enjoying the spectacular fireworks during the Illuminations show, we headed over to Soarin’ Around The World.

Once upon a time, this simulated hang glider ride was called Soarin’ Over California, obviously showing many notable California landmarks. In June, 2016, it was replaced with the Around The World version. Spectacular scenery soaring over the Matterhorn in Switzerland, The Great Wall of China, the Great Pyramids, the Eiffel Tower and so many others. Although we still love this ride, the similar but much more advanced technology of the Avatar Flight of Passage far surpasses Soarin’.

Our last ride was a another slow boat ride through the working laboratories of Living With The Land. Here using innovative growing techniques and cross-breeding high-yield crops, Disney’s horticulturalists hope to be able to help sustain our growing global population. Four greenhouses were filled with specimens of produce from around the world. Besides the produce, there is a fish farm filled with live eels, tilapia, catfish and freshwater shrimp on display. Many of the restaurants in Disneyworld serve the produce and fish grown here. 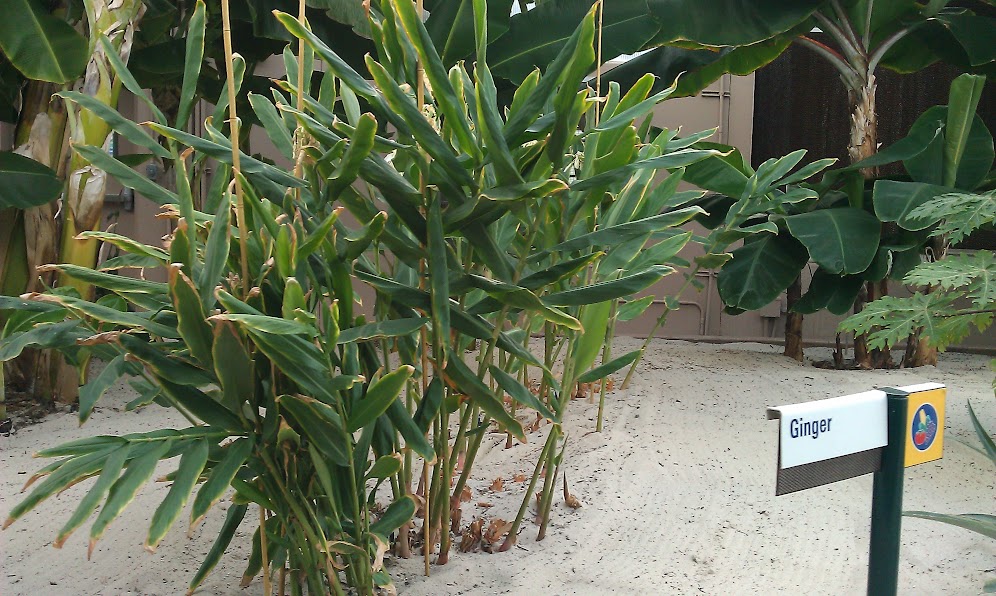 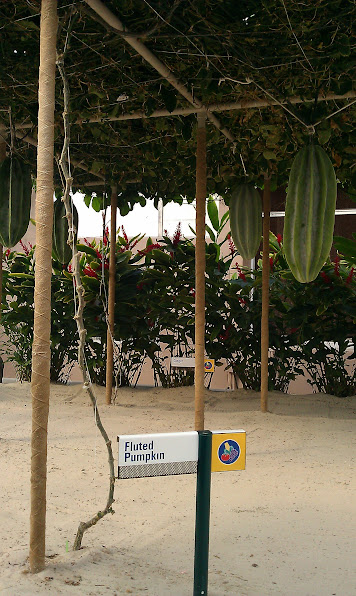 After that, we said enough, no more rides! Since it was close to 10:30 p.m., the park wouldn’t be open that much longer anyway. With tired, sore feet, we slowly walked back to the parking lot and made our way back to Fort Wilderness. Our fitness trackers recorded about 10 miles of walking today. What a long, exhausting but totally fun day!