Yep, “been there, done that”, seems to be what I’ve been chanting a lot this winter season. Why? After our two year hiatus of exploring out west, our return to Florida this winter has us staying at many of the campgrounds/resorts we have visited before. Don’t get me wrong, chanting those words isn’t necessarily a bad thing, for as much as we like to explore new and exciting places, it can sometimes be a lot more comfortable returning to those tried and true places, many of which have earned spots on our list of favorites. These will continue to be places we will always want to visit over and over again. Being familiar with what roads to travel, what sites best meet our criteria and what conveniences are located nearby have made our meanderings a lot less stressful this year.

After the hectic pace of the show, we were really, really looking forward to our first “been there, done that” stop, a park we know very, very well, Rainbow Springs State Park in Dunnellon, FL. Our brief two night stay wasn’t a whole lot of time to unwind but it would be a good start. We love this park with its (mostly) large, spacious, full hookup sites, most surrounded by lush vegetation (see our review and previous posts from 2014, 2015 and 2016 and our dashcam video). Not only do we love the serenity of the natural environment surrounding the campground but we’ve loved exploring and learning the history of the nearby beautiful Headsprings, once a major “old Florida” tourist attraction before the Disney invasion.

When we checked in at the ranger station, we learned of one change that had occurred in the park since our last visit in 2016 – a large tree had fallen on the wooden dock/sitting area on the river and destroyed it. What a shame! How we used to enjoy sitting there for hours watching kayakers and birds floating by while spotting an occasional fish jumping. 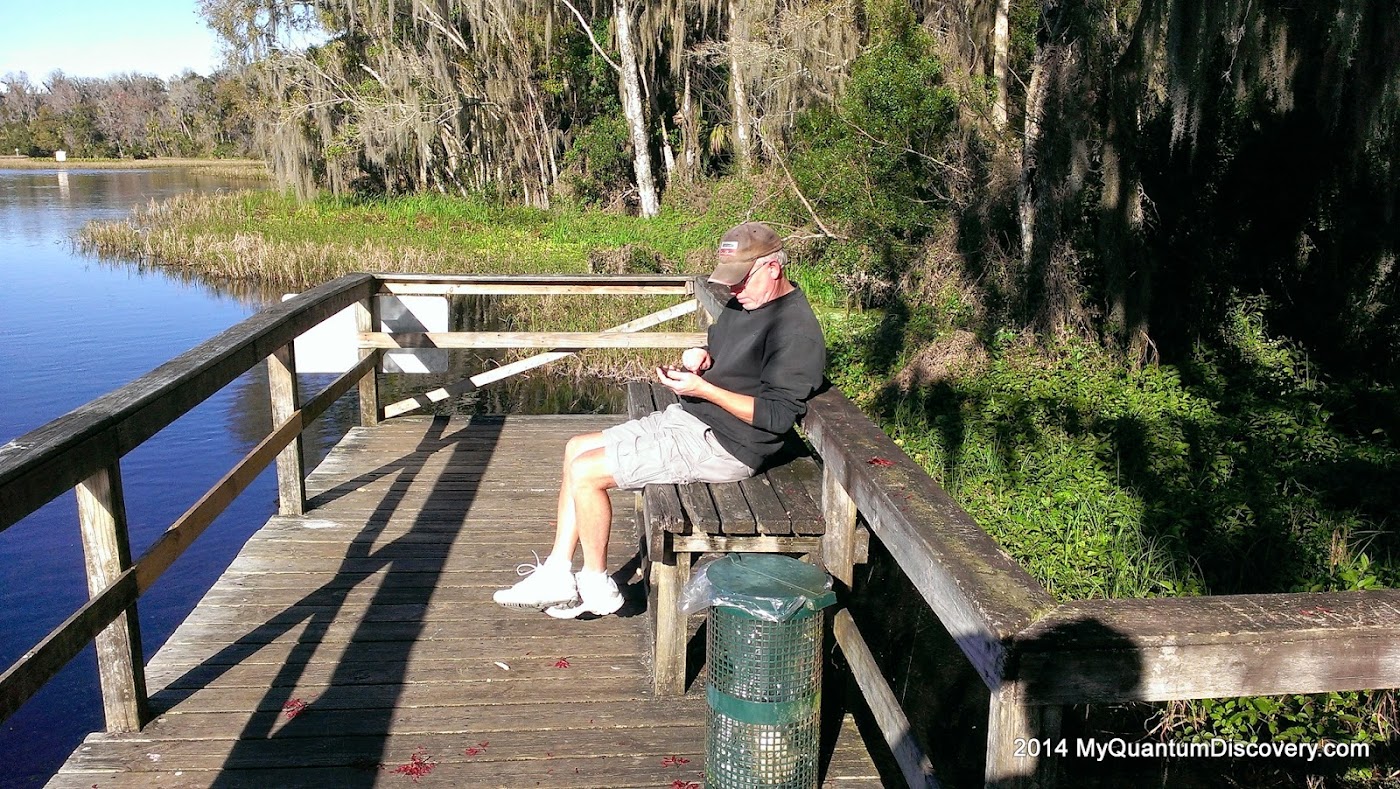 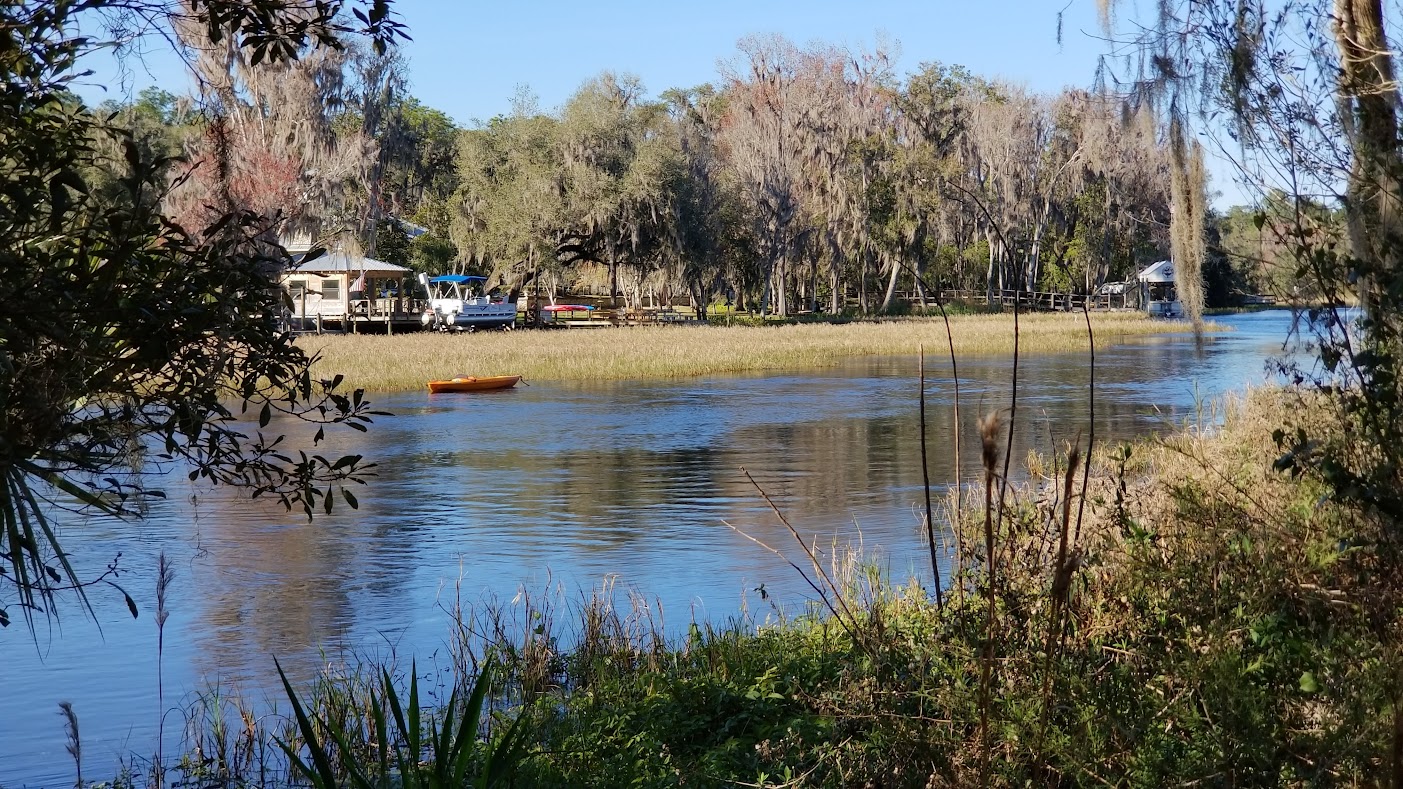 Since we had been there several times before we were more interested in relaxing than in sightseeing but of course we did have to search for a breakfast spot, finally deciding to go to the Breakfast Station restaurant…. 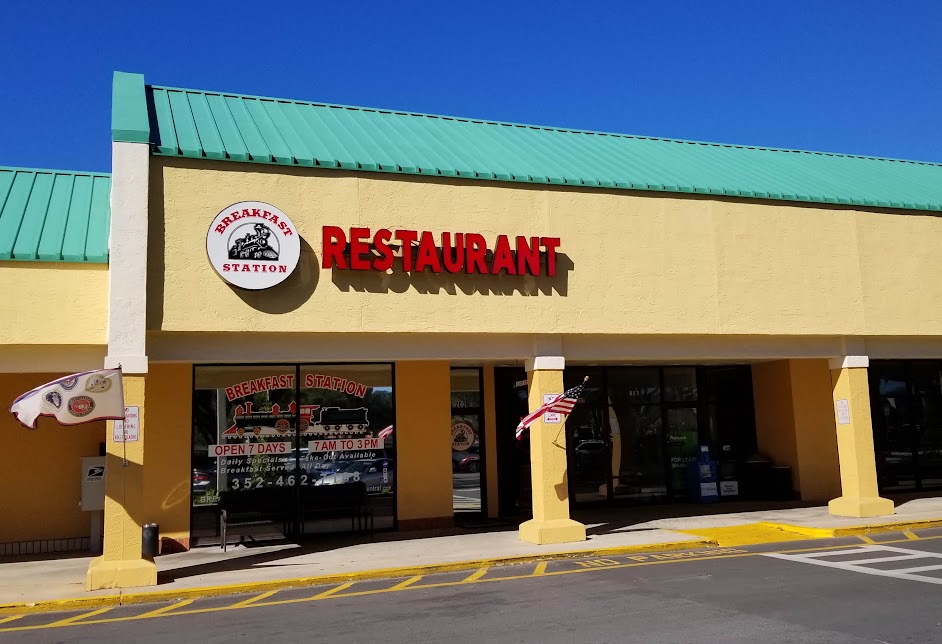 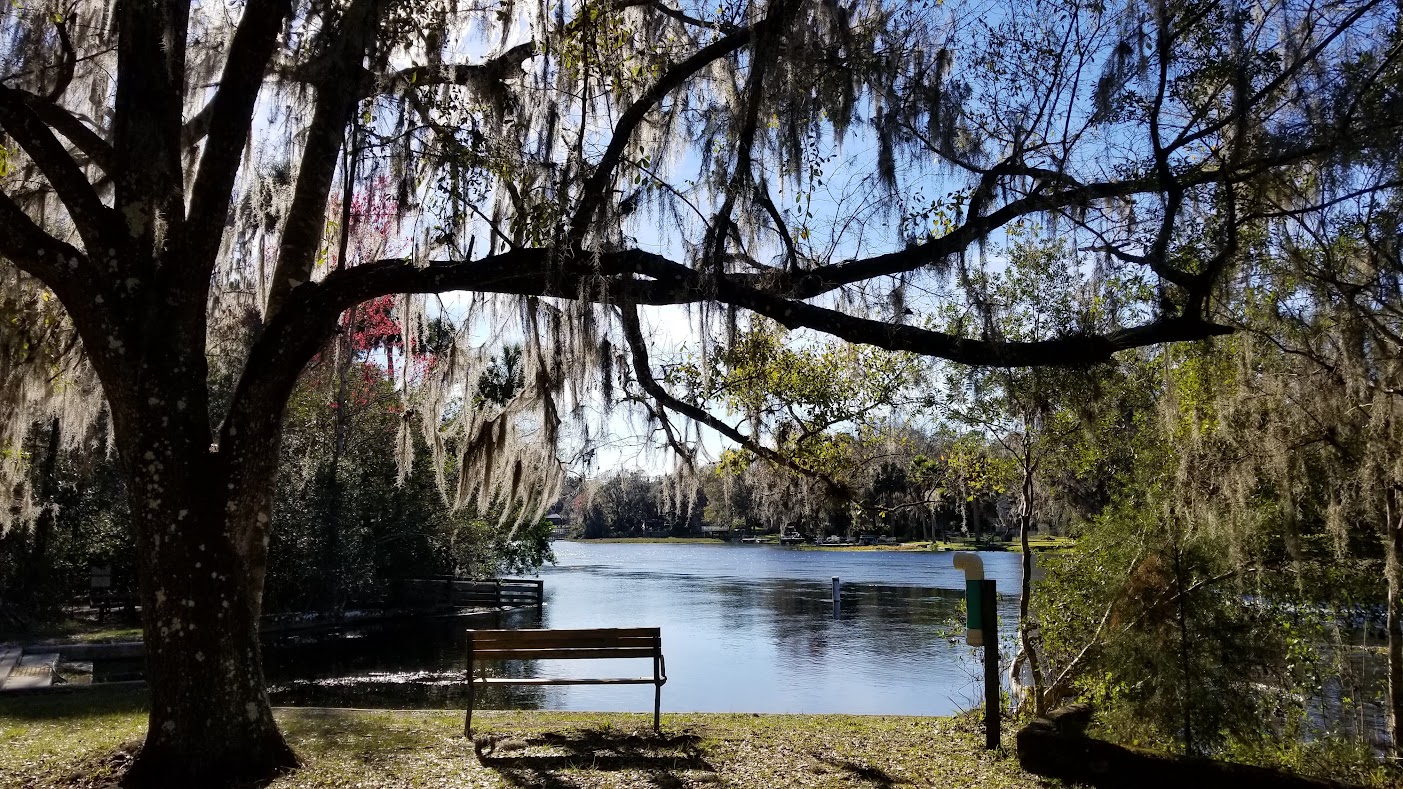 and we watched the totally awesome lunar eclipse.

Too quickly it was time to leave and continue our journey northward. It was only a 1-1/2 hour drive to another favorite, Stephen Foster Culture Center State Park in White Springs (see our review). 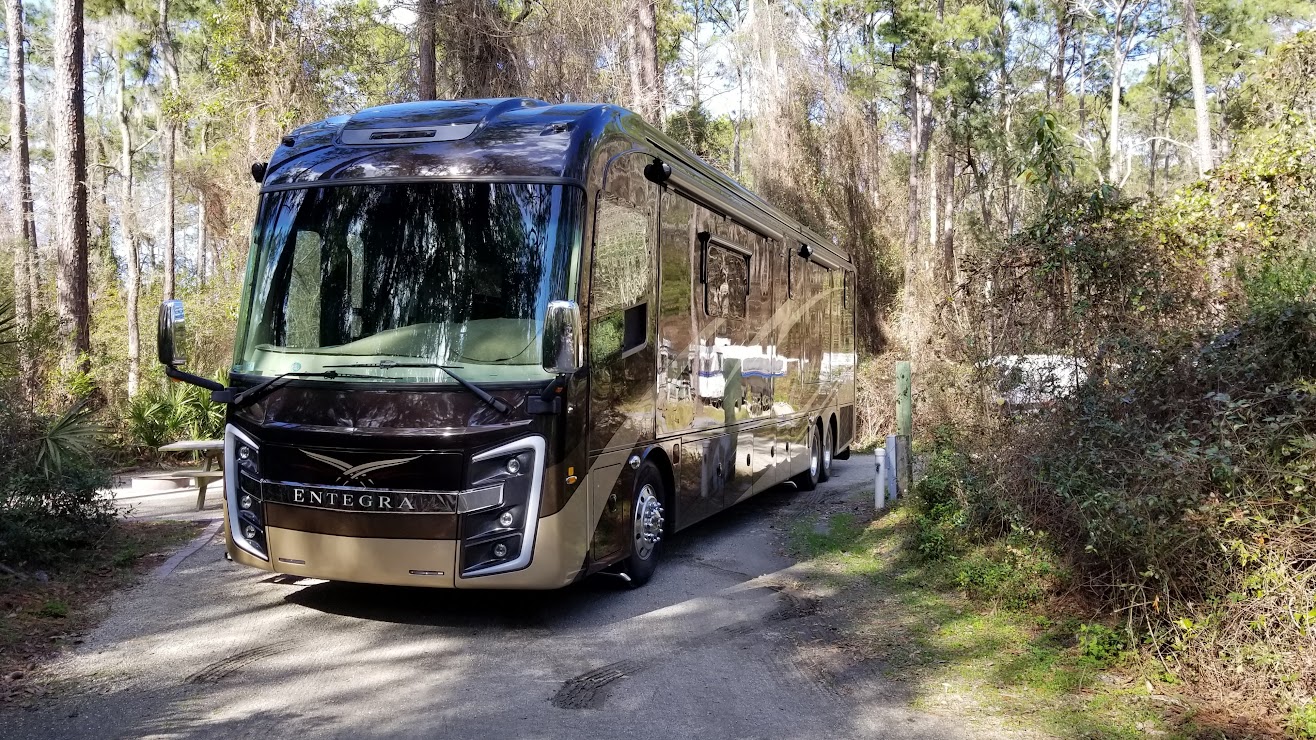 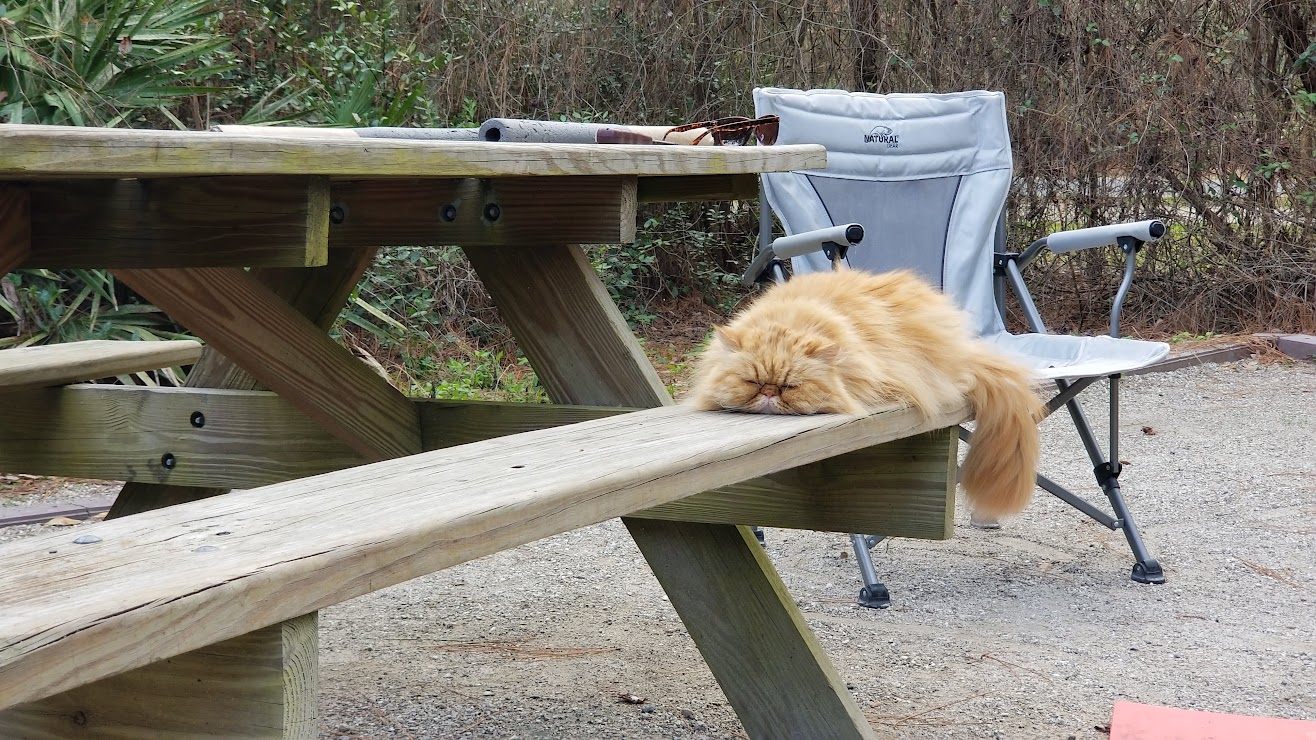 During our visits here in 2014 and 2015 we explored everything the park had to offer and the nearby Big Shoals State Park. On this visit, although we were in relaxation mode, we did manage to work up ambition to take a walk so we could visit the museum and the carillon. Not much had changed since our last visit, except the carillon was now partially working and would play a concert at regular intervals. Unfortunately though, the hourly and quarter hour chimes were still not functioning. 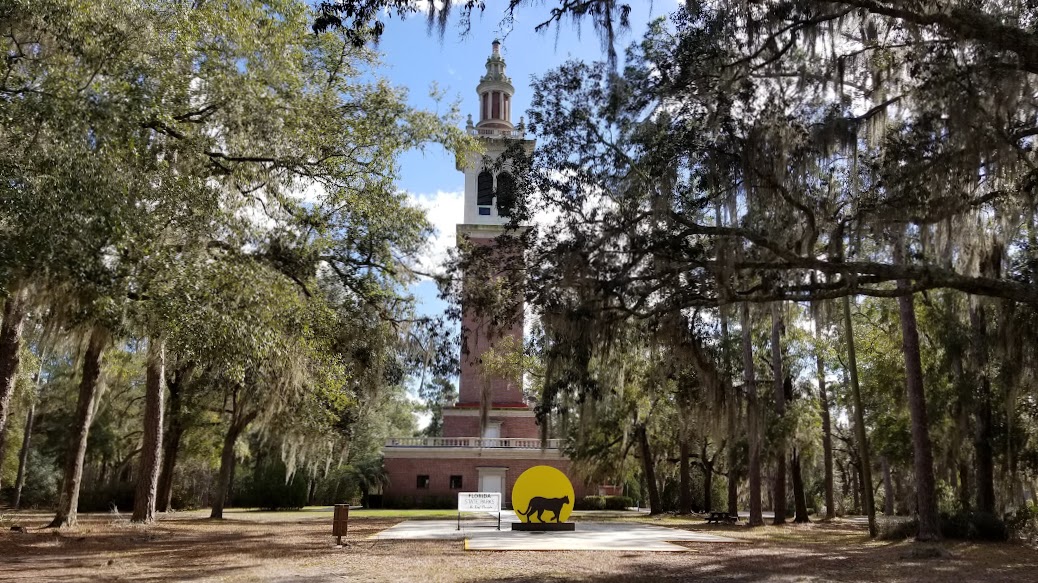 We wanted relaxation and boy, did we get it at our next stop, East Bank Campground on Lake Seminole in Bainbridge, GA, our favorite Army Corps of Engineers (COE) park (see our review). Having been here several times before, we knew that there wasn’t much to do in the area. And we were prepared for the time zone confusion since Eastbank is in Eastern Time but just a few miles down the road everything is in the Central Time zone. In fact the Jim Woodruff Dam which creates Lake Seminole straddles two states – Georgia and Florida!

To see an aerial view of the dam, check out this video. To learn about why the dam was constructed and details about the operation of the dam, take a look at this interesting video.

Since October, the campground had been closed because of damage from Hurricane Michael so we were nervous that it wouldn’t reopen in time for our arrival. Then when the federal government shutdown, we were even more worried that it might not open until that was over. We had booked our stay here way back in September 2018, so regardless of the reason for it not being open, we would have had to scramble to find some other place to stay, a challenging situation since reservations in January in Florida are very hard to come by. But fortunately it did reopen on January 15th (our reservation began on January 25th) and it wasn’t impacted by the federal government shutdown so we were good to go. Whew! 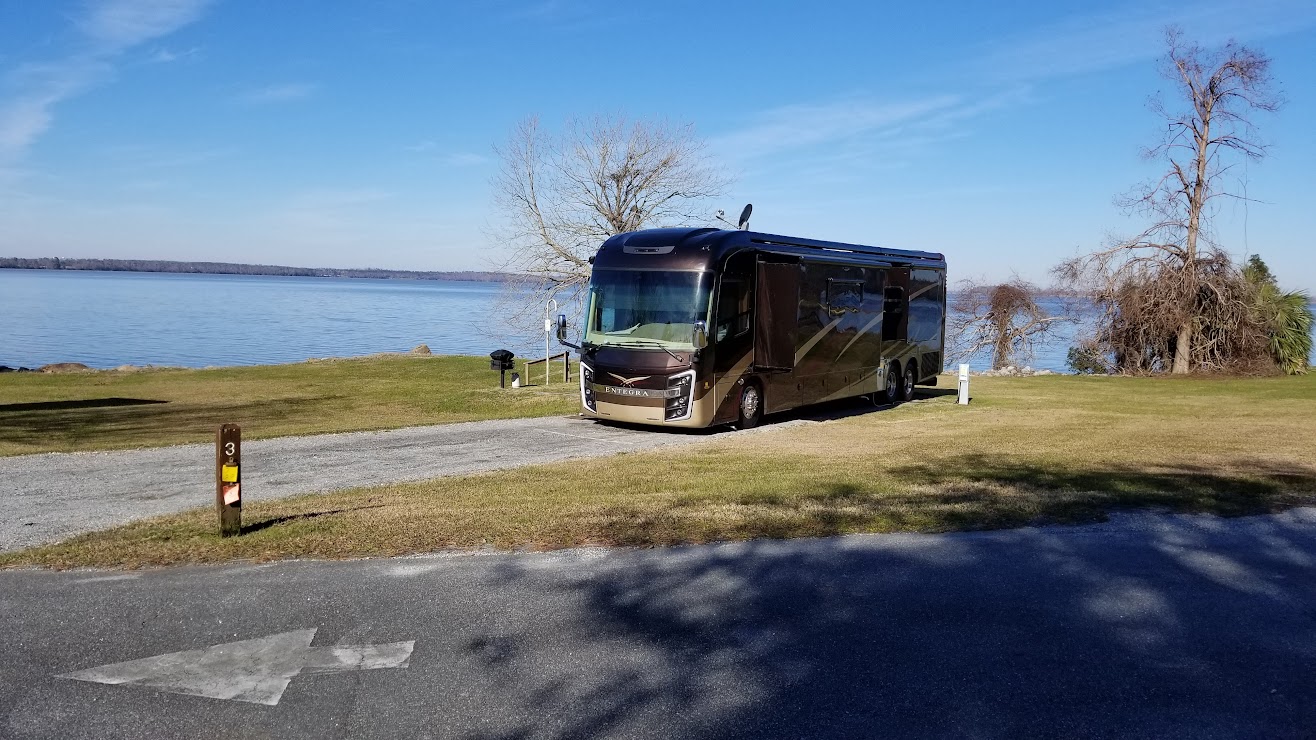 Of course we knew the coast had been devastated by Michael – we had seen evidence of it along I-10 in the Tallahassee area but seeing the damage this far inland was shocking. As we drove through town, the vast majority of homes still had a blue tarp on the roof, over three months later. 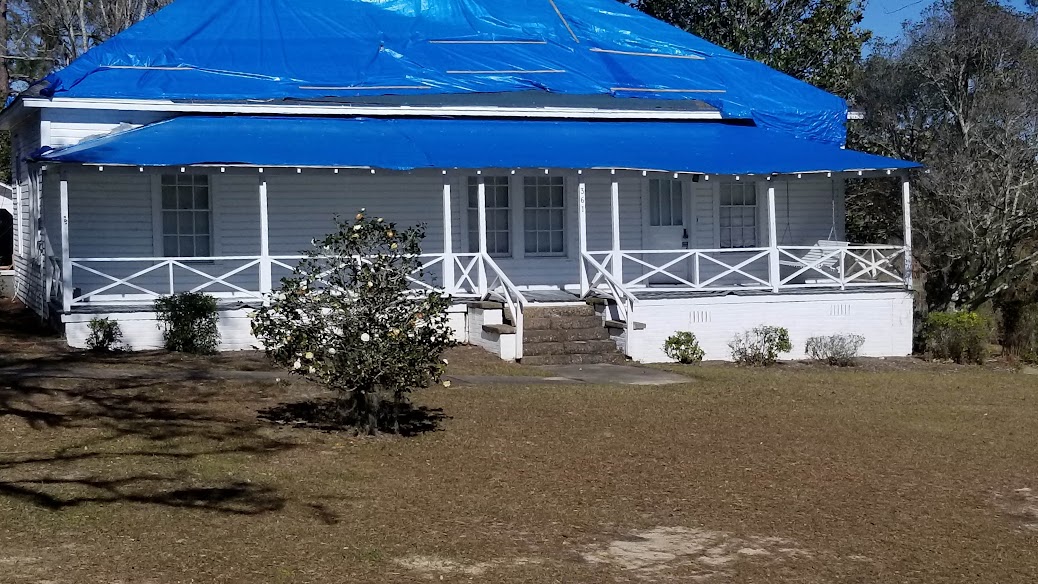 The thick stands of pine trees that bordered the road on the way to the campground were now sparse and in some cases non-existent. Everywhere trees were snapped in two or totally uprooted. Piles of logs, tree limbs and other rubble lined the roads. 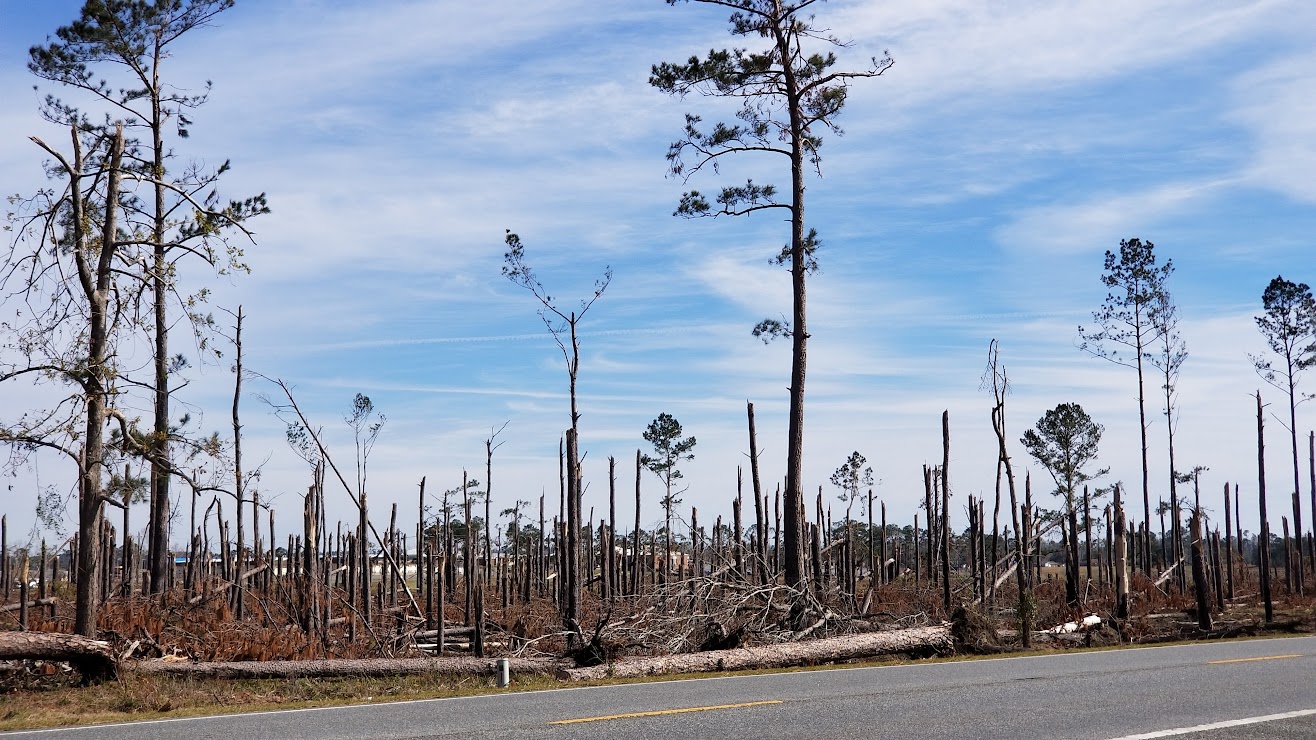 One day, one of the volunteers in the office accidentally deleted our reservation from their system which created a major mess but was very nicely resolved by Ruthie, the Park Ranger. While she was trying to get that resolved, that volunteer was telling us about all the damage from the hurricane. A day or two after the storm, he tried to walk down the road from the ranger station to the campground, a distance of .3 mile but the road was so littered with trees, after 1-1/2 hours he finally gave up. Wow, hard to imagine! Worse yet, those campers that refused to evacuate were trapped for over a month! 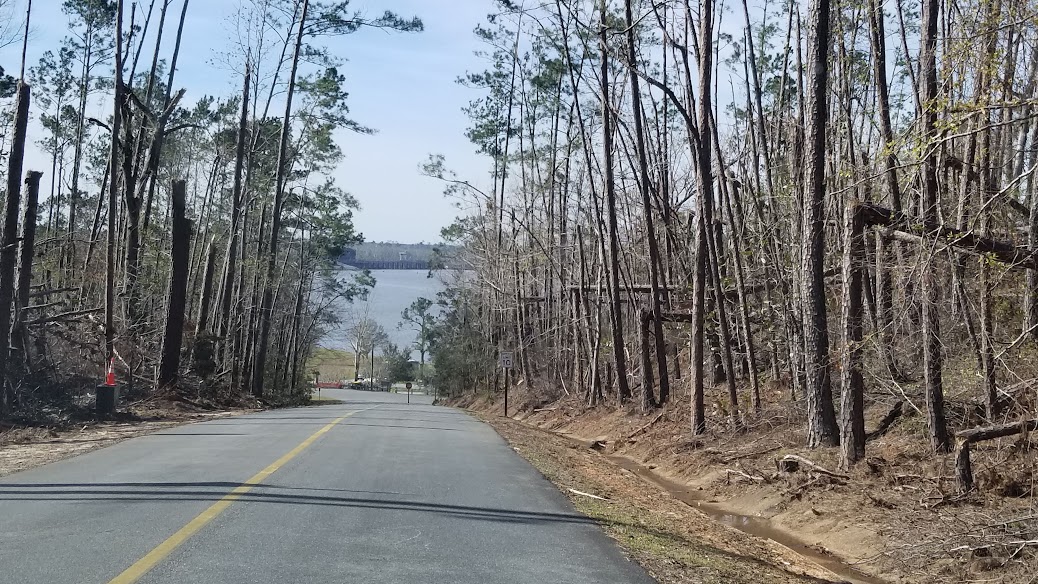 How we love this campground! Although it only has water and electric hookups, that doesn’t matter when you can snag a site right on the banks of Lake Seminole! We wanted relaxation, well, relaxation was what we got!

Once settled into our site, for the first few days, we didn’t do much of anything. Well, not quite, Rob spent an afternoon servicing our Aquahot boiler which had been misbehaving. The diesel oil fired Aquahot provides the majority of our heat and hot water and was intermittently shutting down, not good since temperatures were flirting with freezing point. Luckily a new filter, burner nozzle and cleaning did the trick and all was back to normal.

Later in the week a trip to Tallahassee was on our to do list. On the way, we stopped for breakfast at the Canopy Road Cafe. Cute place with good food! 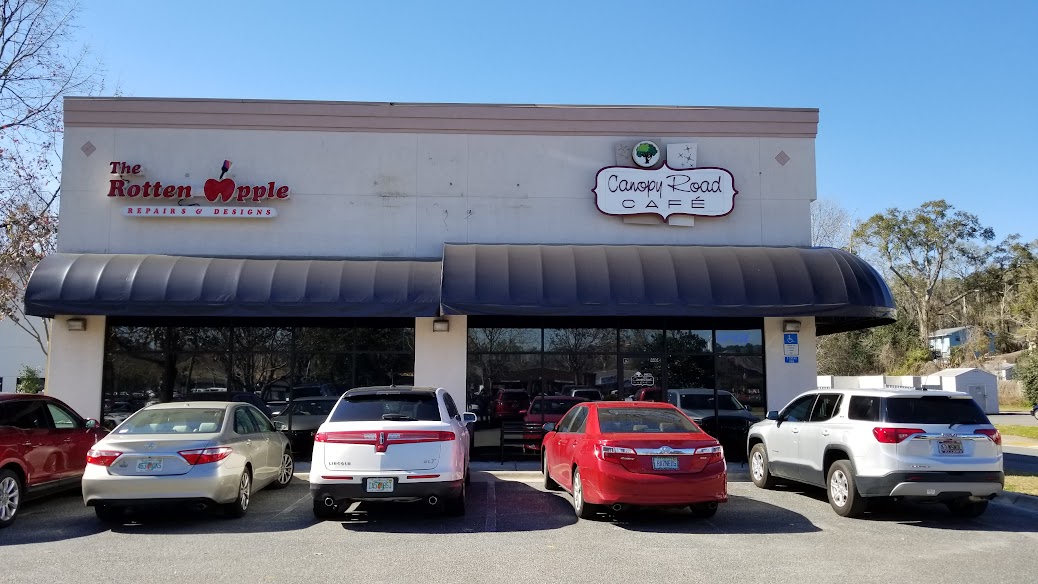 That was followed by a stop at Costco to stock up on a few staples, a subsequent jaunt to the only nearby grocery store, Piggly Wiggly in Sneads (about 7 miles away) and a drive to the Jim Woodruff dam across the lake from our site. 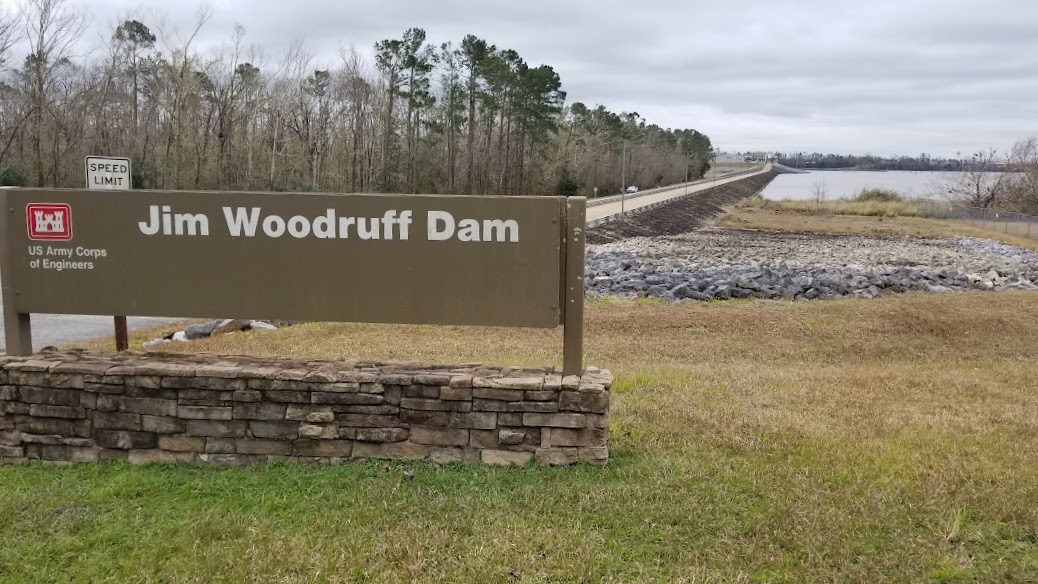 Except for one day when it rained, each night we sat by a campfire waiting for the sky to be painted with brilliant hues of pink, red, gold, orange and violet as the sun slowly sank into the lake. 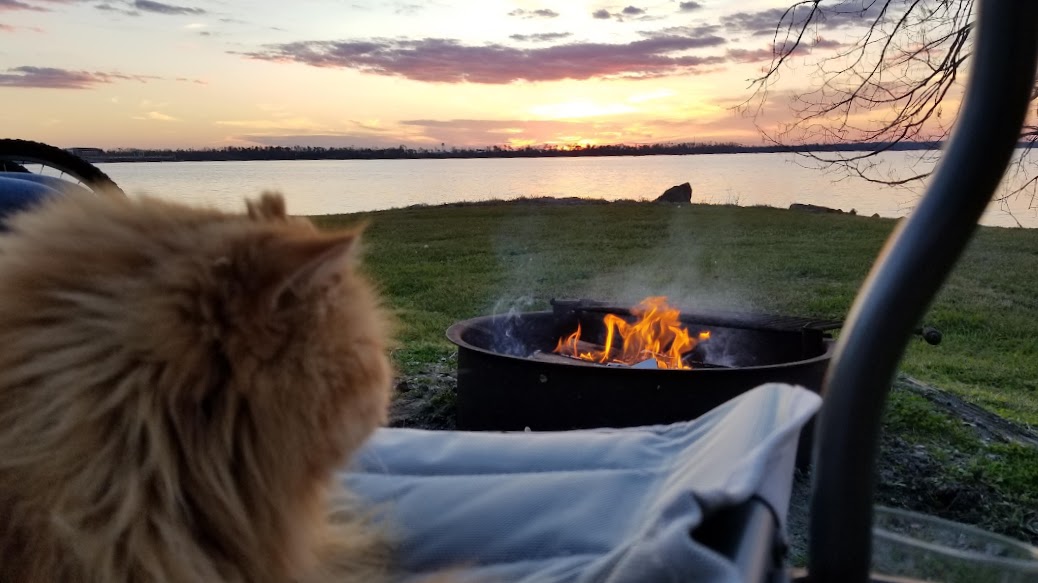 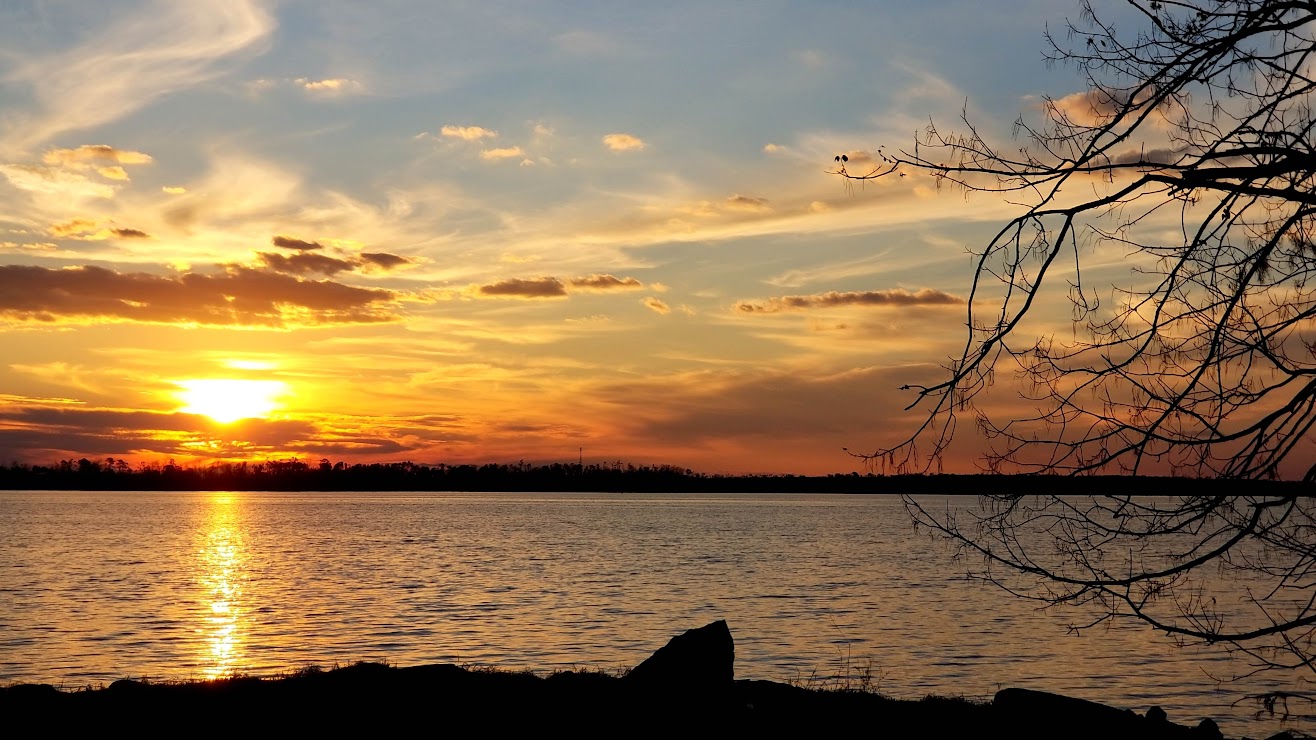 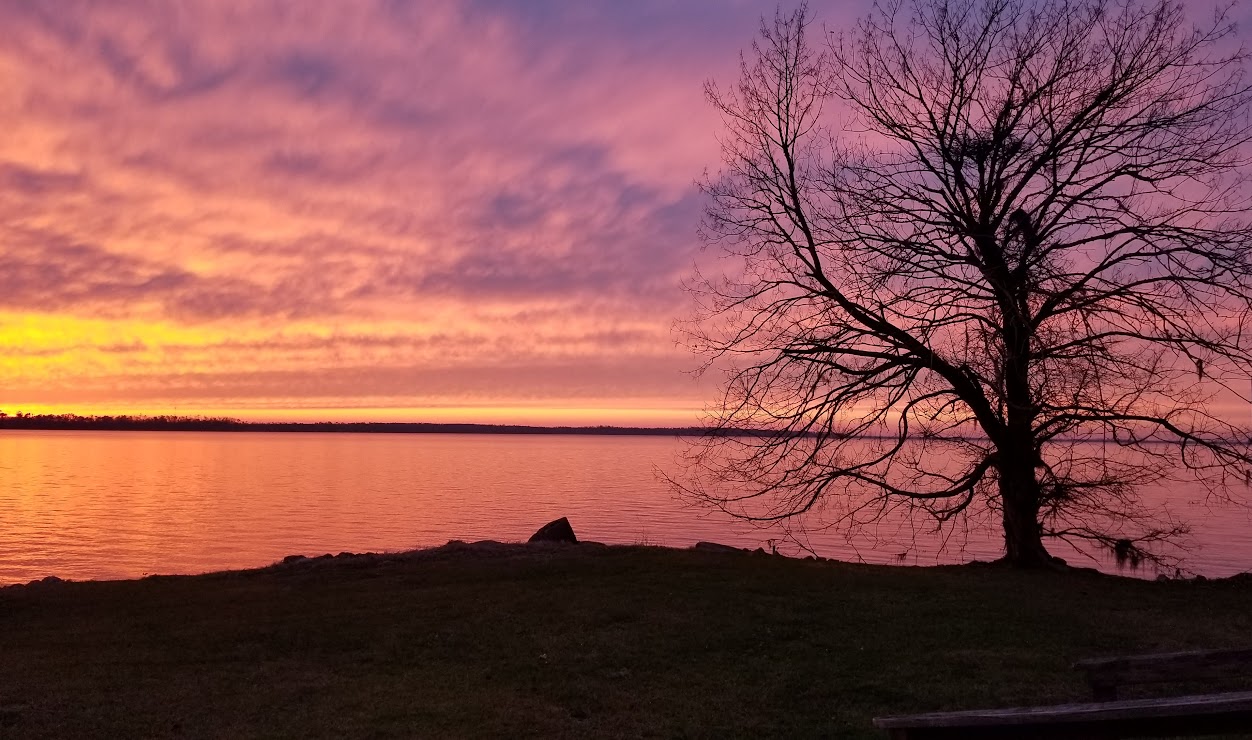 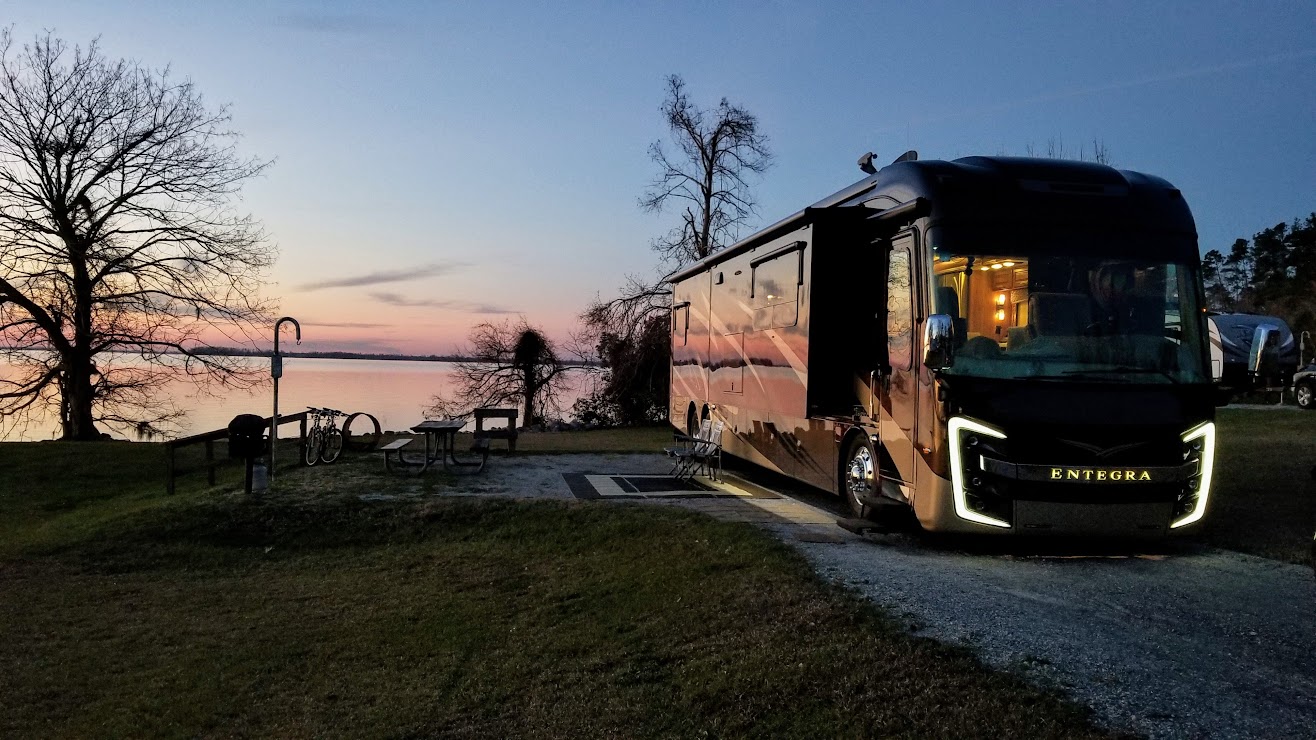 I think after eight days, we had filled our relaxation quota and regretfully it was time to move on. Which “been there, done that” spot were we headed to next?