It was another stupendous day at the Grand Canyon with a sparkling sun gleaming against a bright blue sky. A great day to head east along the less crowded Desert View Drive, a scenic route which follows the rim for 25 miles out to the East Entrance of the park. Seeing the number of overlooks on the map and having read that there were several unmarked ones, we knew it would be a very slow but very scenic 25 miles!

Our first stop was at Pipe Creek Vista which can be accessed either by car, by the Kaibab Rim Route (Orange) shuttle bus, or by foot or bike via the Canyon Rim Trail. This vista looks down on Pipe Creek, the major canyon between the Kaibab Trail and the Bright Angel Trail

Because of the high volume of traffic and limited parking, private vehicles are no longer allowed at the next overlook, Yaki Point at the end of a 1.5 mile side road. Note that the Orange shuttle bus goes there or it can be reached by foot (parking is available in a nearby picnic area).

Not stopping, we continued on to the next unmarked pullout. Ah, a sign identified one of the formations pointing out that the canyon has endless formations that only ones imagination can bring to life. For now this one looks like a Duck on a Rock! Can you see the duck on the left? Come back in 50 to 100 years from now and the power of erosion will have transformed it into some other shape. 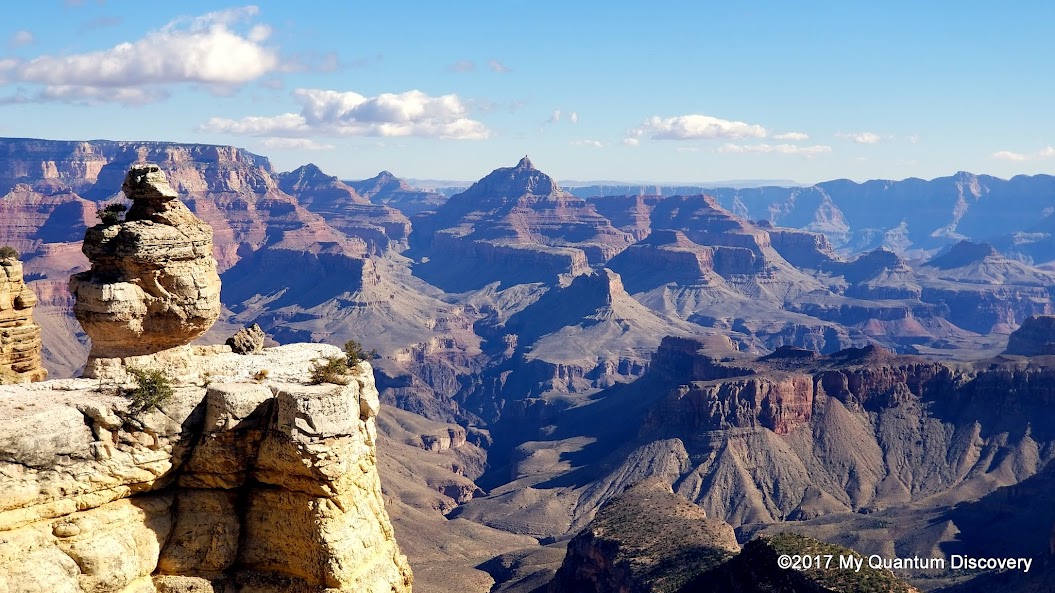 At the aptly named Grandview Point there were more breathtaking panoramic views.  At an elevation of 7,400′  this is the southernmost point on the South Rim, and is reached via a one mile side road. Because it is the furthest from the river, it is the largest area of buttes and ravines. From 1892 to 1901 a copper mine was operated by Pete Berry on Horseshoe Mesa at the end of Grandview Trail. When the mine was unprofitable, Berry constructed the Grandview Hotel but that wasn’t successful either. Today nothing remains of the hotel.

Besides all of the beautiful scenery, a bit of education was offered at the Tusayan Museum and Ruins, a very informative and worthwhile stop. Excavated in 1930 and considered to be one of the major archaeological sites in Arizona, these ruins are of an 800 year old Pueblo Indian site. 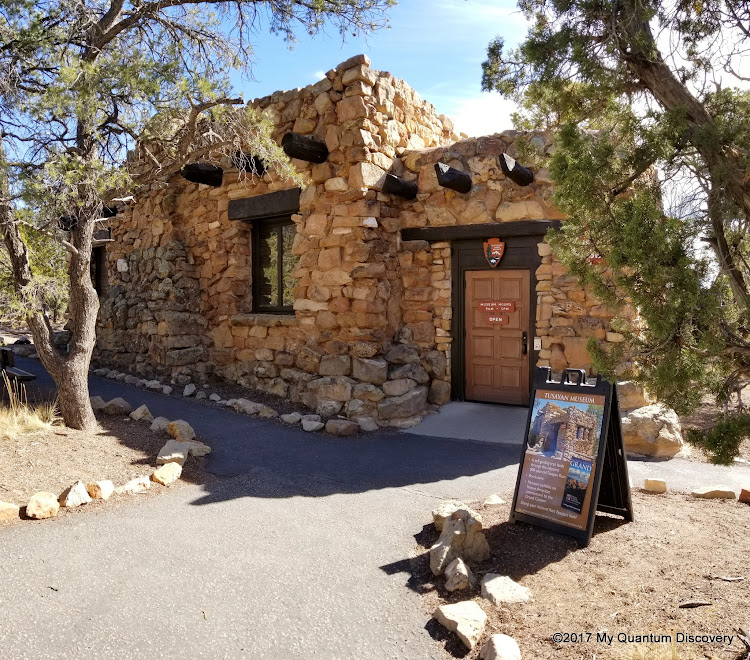 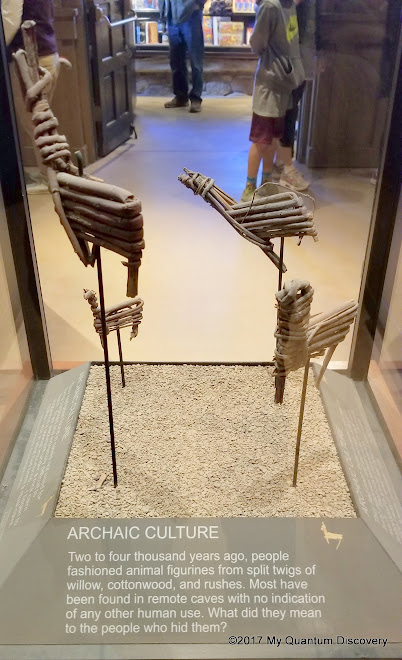 Admission to the museum and ruins which are open from 9 am to 5 pm daily is free. Displays in the museum provide a window into the lives of a thriving community as illustrated by its pottery, seashell bracelets, corncobs, and arrowheads. Of significance is a display of 2,000–4,000 year old original split-twig figurines which were collected from nearby caves in the park, an indication of the long human presence in the canyon.

Outside there is a 0.1 mile self guided walk around the ruins with interpretive signs that provide insight into the way of life of the people who occupied the area 800 years ago. Ranger led tours are available but only in the summer and fall, however, there was a ranger stationed near one of the kivas to explain what those were used for and to answer any questions visitors might have.

Featuring a central plaza which faced south surrounded by storage rooms, living quarters, and two kivas or ceremonial structures, historians speculate this small Anasazi village numbered about 30 people. Due to the lack of rainfall and difficulty growing crops, it was occupied for only a quarter of a century. 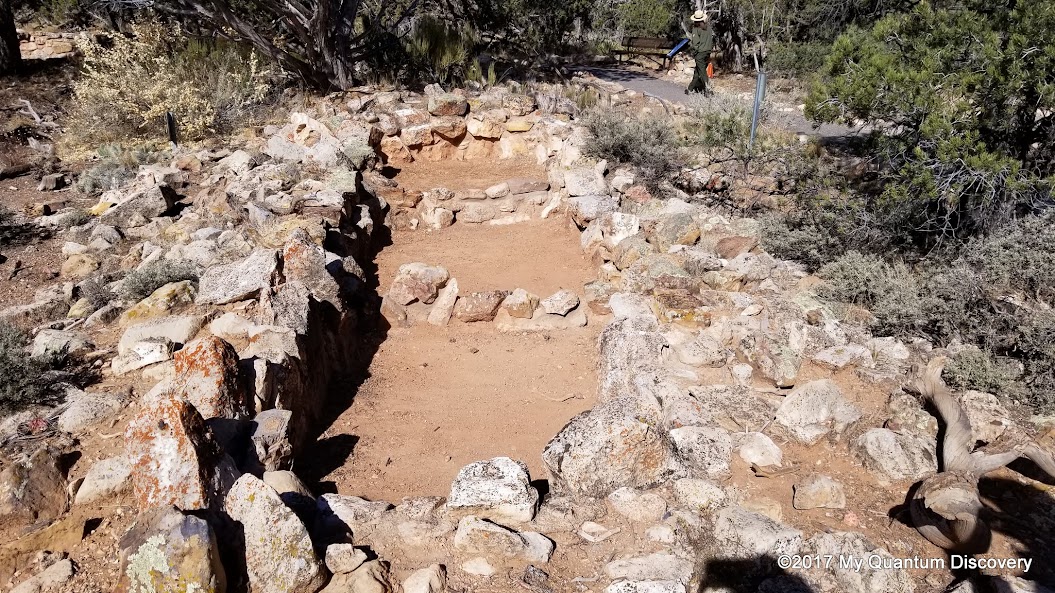 Leaving the ruins, our next stop was at Moran Point  where three of the Grand Canyon’s main rock groups are visible – sedimentary Layered Paleozoic Rocks, the Grand Canyon Supergroup, and the metamorphic and igneous Vishnu Basement Rocks. The Supergroup rocks are visible at only a few spots along the rim. For a labeled picture of the layers on the National Park Service website, click here. 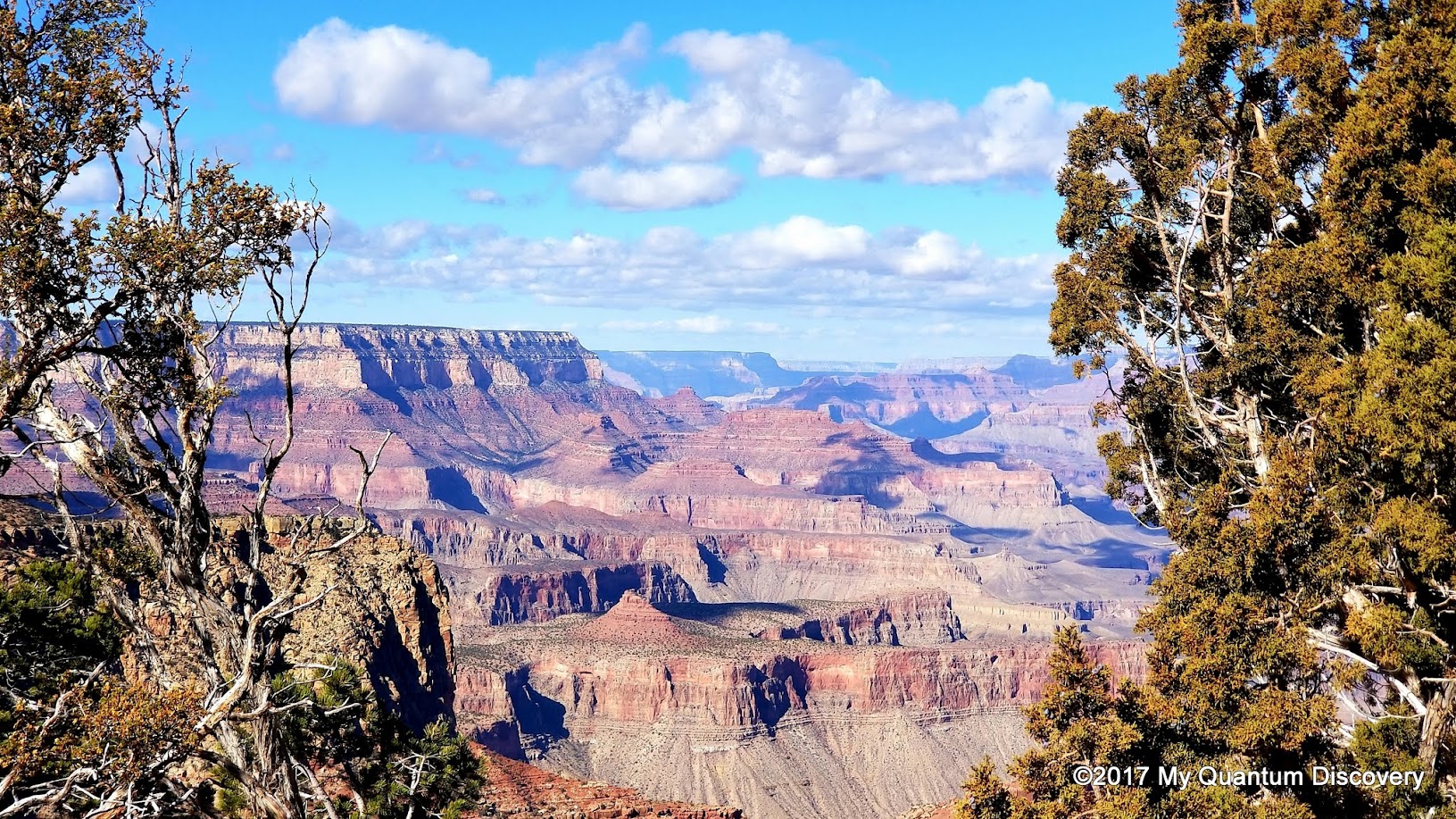 Lipan Point offers the widest views of the canyon and boasts the longest stretches of views of the Colorado River versus any other point at the South Rim of the Grand Canyon. This pullout also has views of the powerful Hance Rapid on the Colorado which you can’t really see from this far away. Take a ride on the rapids without getting wet by watching this YouTube video. The Unkar Delta, the site of another Puebloan people can also be seen from here as well as more of the Grand Canyon Supergroup rock formation. 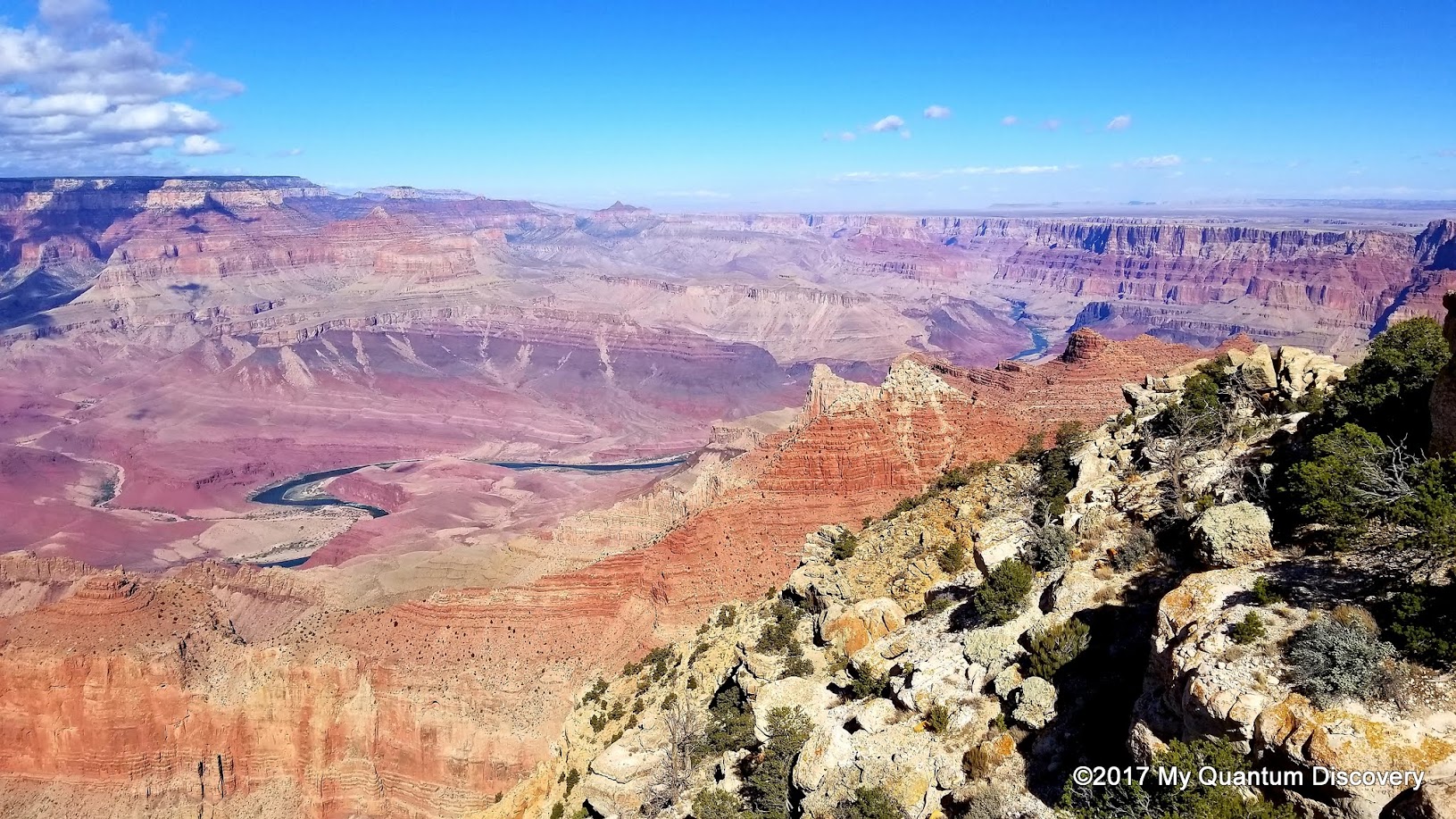 At an elevation of 7461′, Navajo Point is the highest overlook on the South Rim (unless you are at the top of the Desert View Watchtower which is slightly higher). 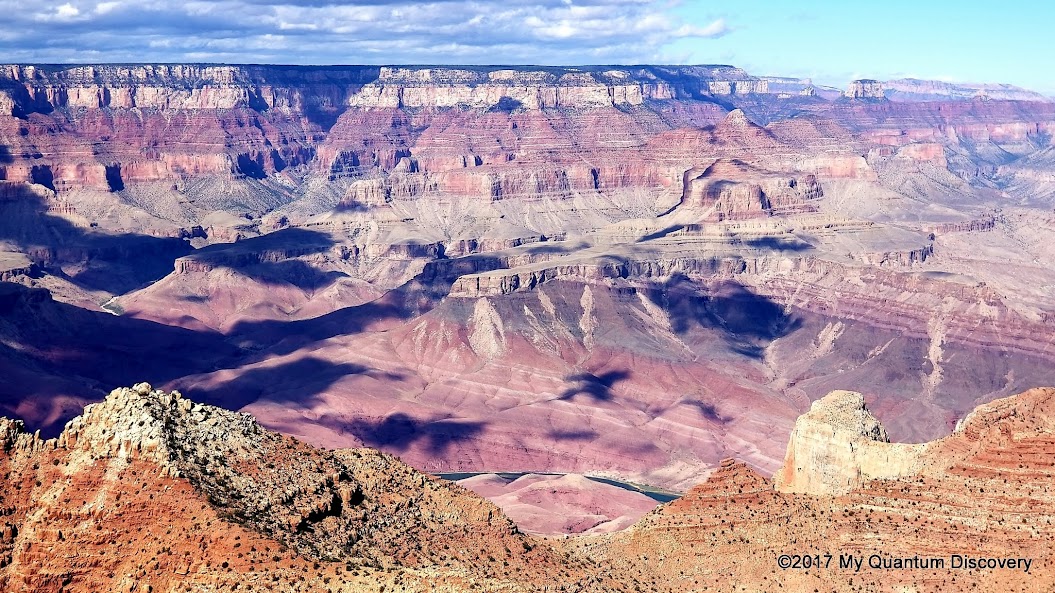 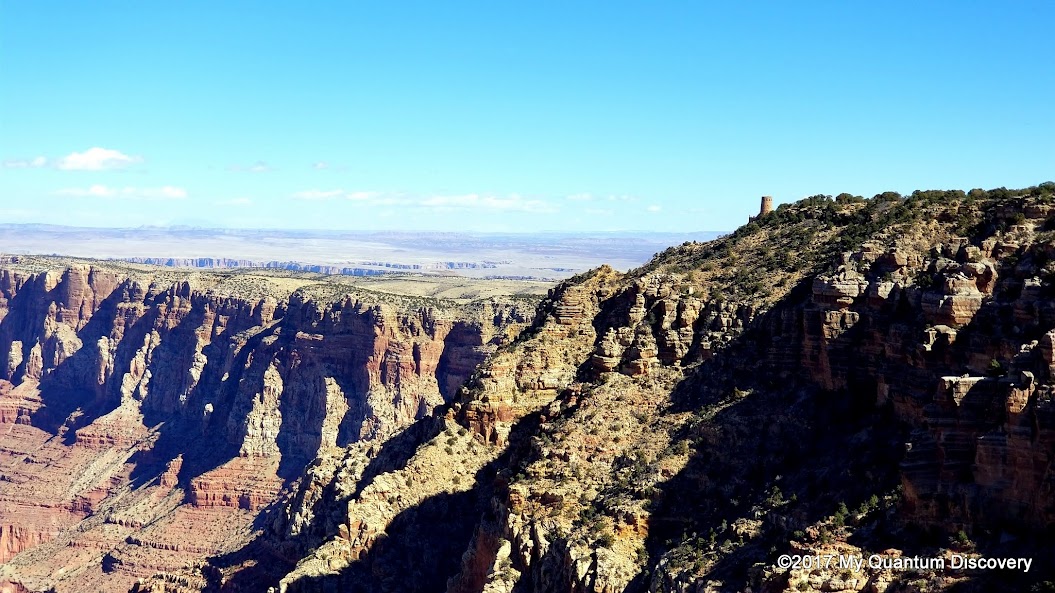 Navajo Point was the next to last overlook on Desert View Drive! But we’re not done yet – our next stop would be the Desert View Watchtower which is one of our favorite Mary Colter landmarks, but we’ll cover that in the next post.