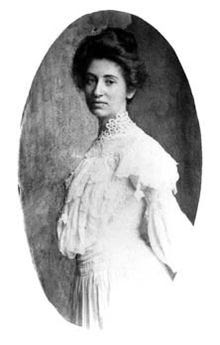 Mary Jane Elizabeth Colter was a notable architect from the early 1900’s, a contemporary of Frank Lloyd Wright but probably most people have never heard of her. At least not until they visit places like La Posada Hotel or the Grand Canyon. With over 5 million visitors a year, it’s no wonder Mary Jane Colter has earned the title of the “best known unknown architect in the National Parks.”

La Posada Hotel in Winslow, AZ may have been what Mary Jane Colter considered her greatest masterpiece, but the buildings she designed, built and decorated in the Grand Canyon highlight her brilliance as the chief architect for the Fred Harvey Company, a position she held from 1902 to 1948. The development of the South Rim was not only a significant accomplishment for Colter but also one for the Atchison, Topeka & Santa Fe railway, as well as the Fred Harvey Company – the Grand Canyon would be their most important destination resort.

Not much is known about Colter’s personal life although various articles state that she never married and that she was a Stetson-wearing, chain smoking perfectionist, a difficult and demanding colleague, one who appreciated her whiskey and could cuss as well as any man. Being one of the first female architects, having these traits was probably a necessity to survive in what was back then a totally male dominated field.

But it was her vision and her architectural style along with her utilization of authentic materials combined with her flair for Southwestern and Native American motifs, and not her personality, for which she is best known. By creating aesthetically pleasing structures using native stone and rough hewn wood that blended into the natural environment, her style was often referred to as “National Park Service Rustic” or sometimes “Parkitecture”. Four of her buildings at the Grand Canyon (Hopi House, Hermits Rest, Lookout Studio and Desert Watchtower) were designated as National Historic Landmarks in 1987.

Having gained an appreciation for her style and her attention to detail at La Posada Hotel and the Painted Desert Inn, a visit to each and every one of her buildings along the South Rim (with the exception of Phantom Ranch, located at the bottom of the canyon) was an absolute must for us.

In 1904, Colter was commissioned by the Fred Harvey Company (now owned by Xanterra) to create a building across from the elegant, newly constructed El Tovar Hotel that would serve as a market for Native American crafts made by artisans on the site. It was the first of seven projects designed by Colter in the park. Her choice to model the building after the 10,000 year-old pueblo dwellings of the Hopi village in Old Oraibi, AZ was a very appropriate one, for according to their creation story, the Hopis emerged on earth at the Grand Canyon.

To achieve her goal of creating a building representing a product of nature as well as an expression of culture, Colter used red sandstone blocks and adobe masonry, ceilings that were thatched with layers of saplings and timbers taken from the nearby forest, and chimneys made from broken pottery jars stacked and mortared together. Her small windows and low ceilings minimized the harsh desert sunlight and at the same time created a cool, comfortable and cozy feel to the interior.

When it opened in 1905, it was considered a “living gift shop” because artisans, mainly Hopis, lived on the top floor while the first two floors featured workshops and areas for tourists to purchase their items.

Then and now, the Hopi House has offered a wide range of Native American arts and crafts for purchase. Pottery and woodcarvings are beautifully displayed the same way that Colter displayed 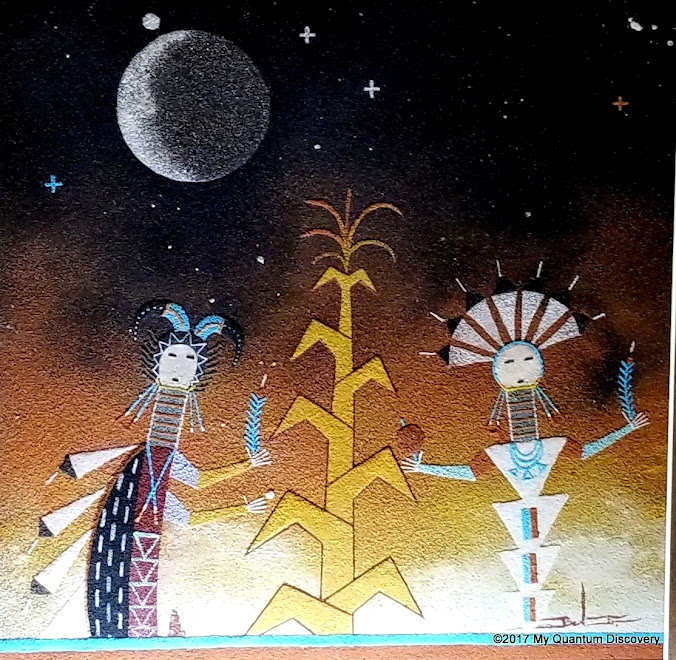 them way back when – on counters draped in hand-woven Navajo blankets and rugs. There were ceremonial masks, hand crafted kachinas, baskets hung from peeled-log beams, Native American jewelry, sand paintings, and art work all artistically displayed.

Making our way up to the second floor gallery where a variety of museum-quality and collectible items were housed, we stopped to admire the Hopi murals created by an unknown artist decorating the stairway walls. Amazing place – not only because of the high quality (and a little pricey) arts and crafts available for purchase but also because of articles on display depicting the building’s rich history. This YouTube video will give you a taste of the beauty and history of the Hopi House.

Located on the western edge of the park at the end of the historic 7 mile Hermits Road which is closed to private vehicles March 1st to November 30th, our choice was to either hop a ride on the free shuttle bus (Red Route) or take a rather lengthy walk. No surprise – the shuttle won! Note this particular shuttle route shuts down during the months of December, January and February so vehicles are allowed during those winter months.  Without stopping, it is an 80 minute round trip ride and the buses run about every 15 minutes during the day. 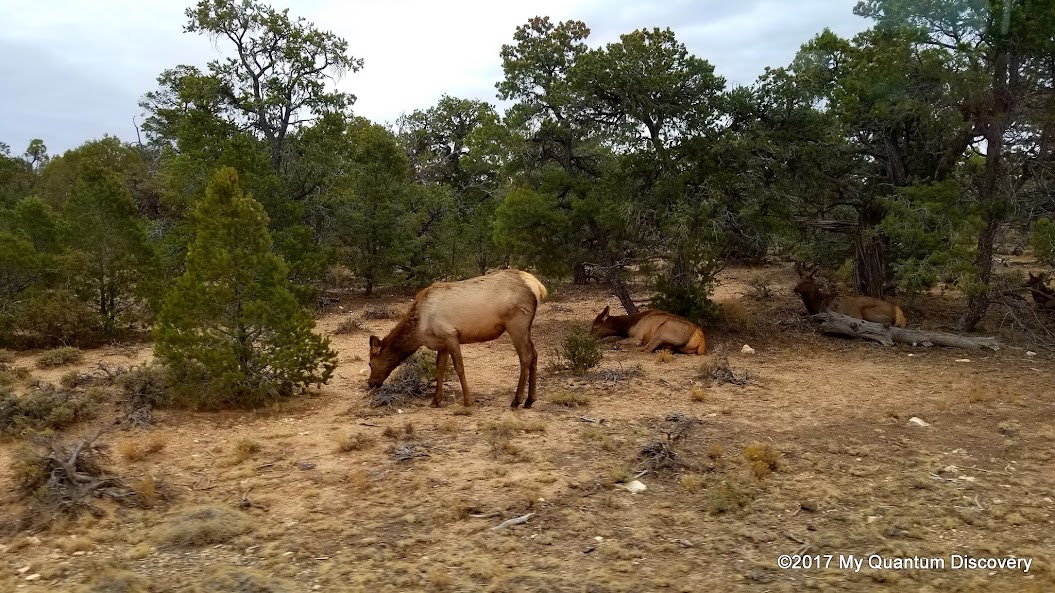 Although we were anxious to get to our ultimate destination, half the fun of getting there was to hop off and on the shuttle so we could enjoy the scenic vistas and views of the Colorado River at each of the nine overlooks (outbound route only, the inbound bus only makes 4 stops) along the route. A few of them were notable and worth mentioning. 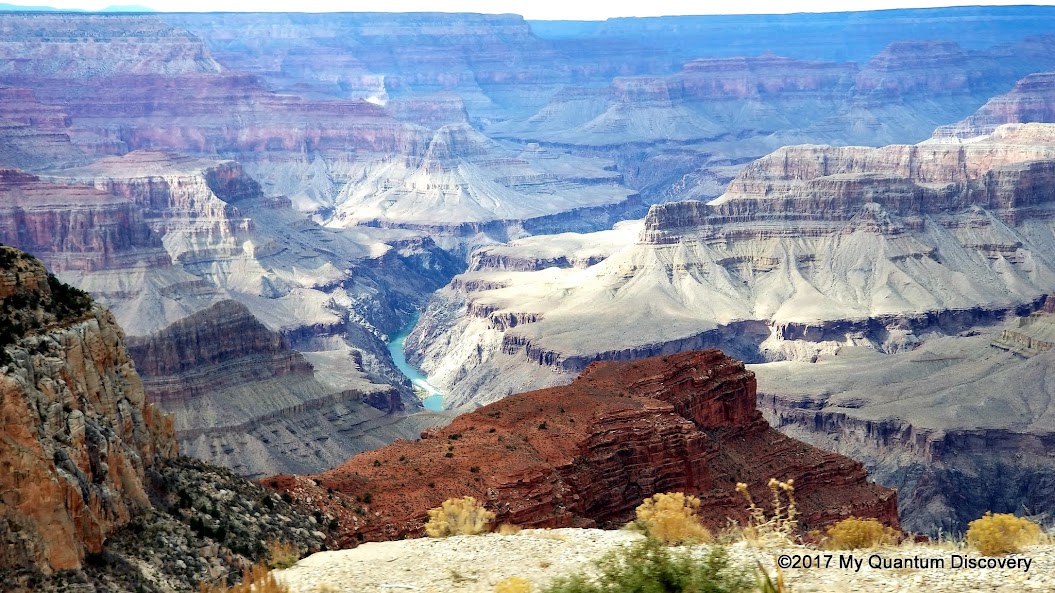 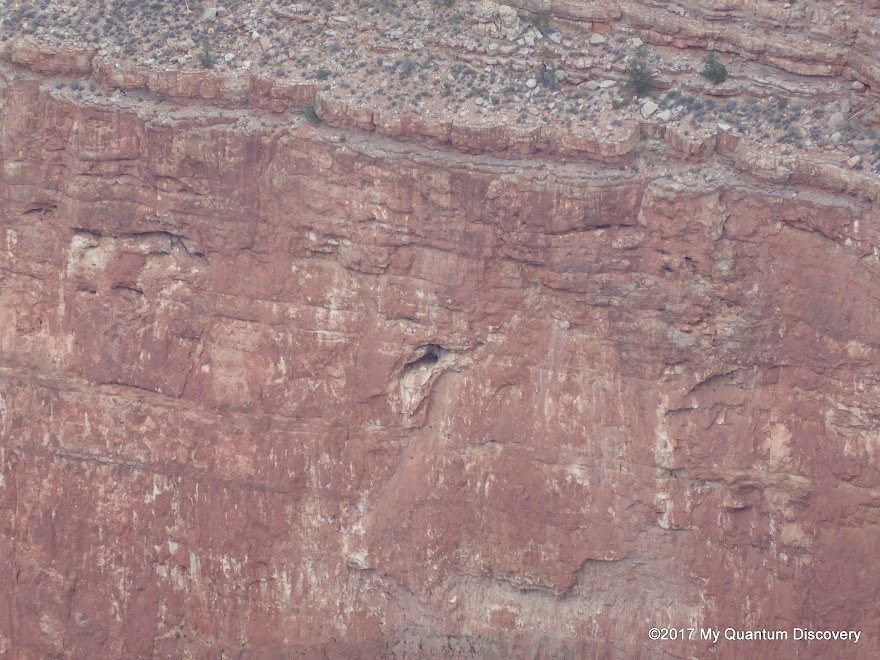 It probably took us a few hours to finally arrive at our destination. There, several feet from the rim edge and totally blending in with the surrounding landscape, was Hermits Rest, a stone building tucked inside a small man-made earthen mound. Colter wanted this particular building to represent an abode that might have been built by an early settler, someone such as Louis Boucher, a Canadian-born prospector, miner, explorer and a guide at the Grand Canyon, who was known as the “hermit”. Judging from the exterior, I think she accomplished her goal!

Built in 1914 at a cost of $13,000, Hermit’s Rest was not only to be a rest area where horse drawn carriages could deposit tourists and turn around but also a place where tourists embarking on the Hermit Trail or arriving at the rim from Hermit Camp could relax. Although the structure is awesome and much the same as it was originally, today it is more like a giant souvenir shop!

The inside is divided into two rooms and was very impressive, certainly much bigger than we expected. Near the entrance the building has a two story high ceiling adorned with rough hewn flat wooden beams. The upper wall has large windows that allow natural light inside. 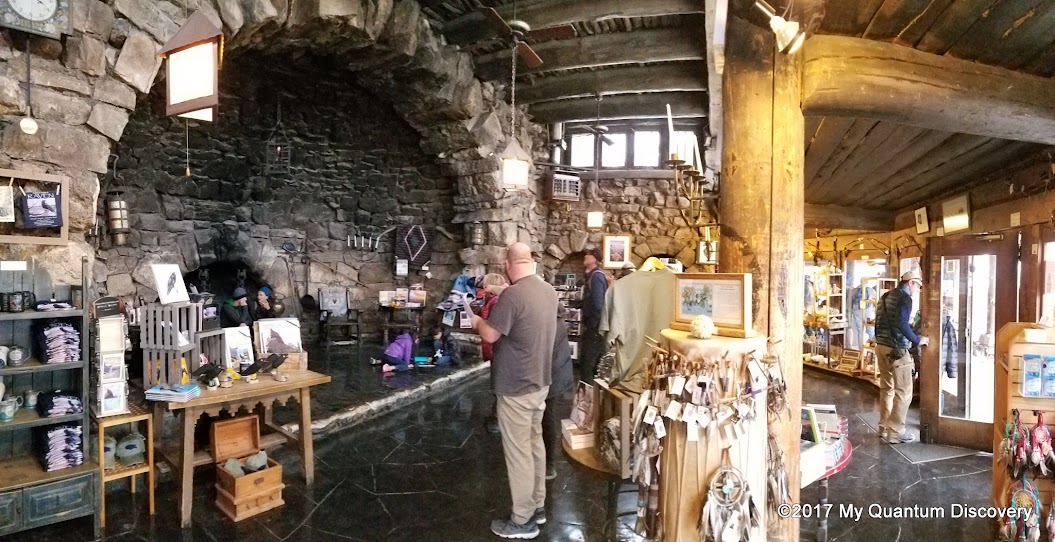 Catching our attention, however, as we walked in was an enormous alcove with a huge arched stone fireplace, decorated with ornate andirons, antique kitchen and fireplace tools, hanging southwestern rugs, metal lanterns and rustic chairs, all of which added to the overall rustic ambiance. It is said that when the fireplace was initially built, Mary Colter actually smudged the stone with soot to make the fireplace look old and used instead of brand new. Evidence of her attention to detail and wanting everything to look authentic. Another smaller room, also with a fireplace, is now used as the “rug room” where Navajo rugs are sold. 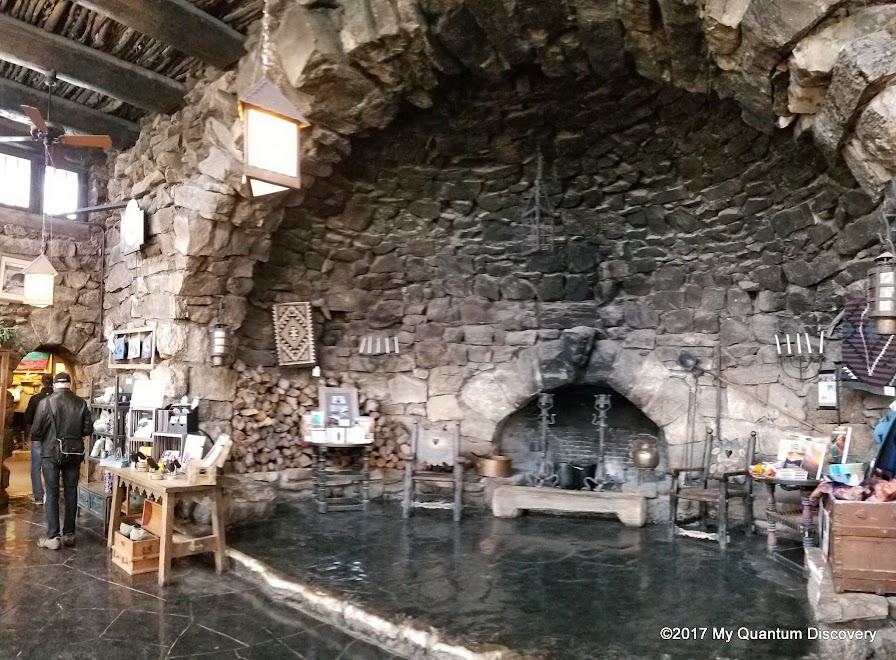 Although this place was awesome, the overall ambiance was a bit overwhelmed by the shelves and racks displaying T-shirts, knick knacks and a variety of souvenirs, all available for purchase. A necessary evil I suppose. A snack bar is located outside. It was difficult envisioning what it must have been like back in the days without all the “stuff” on display, but it must have been very impressive to early travelers arriving by stage coach or on foot!

It must have been a busy year for Colter because Lookout Studio was also built in 1914, the same year as Hermits Rest. For this project, Colter mimics 12th century Native American construction design by integrating the structure into the natural landscape so it almost looks like it is growing out of the canyon rim. To accomplish this, she ingeniously blended native stone found in the canyon with wood and designed an uneven irregular roof to serve as a seamless transition from the building to the rim. 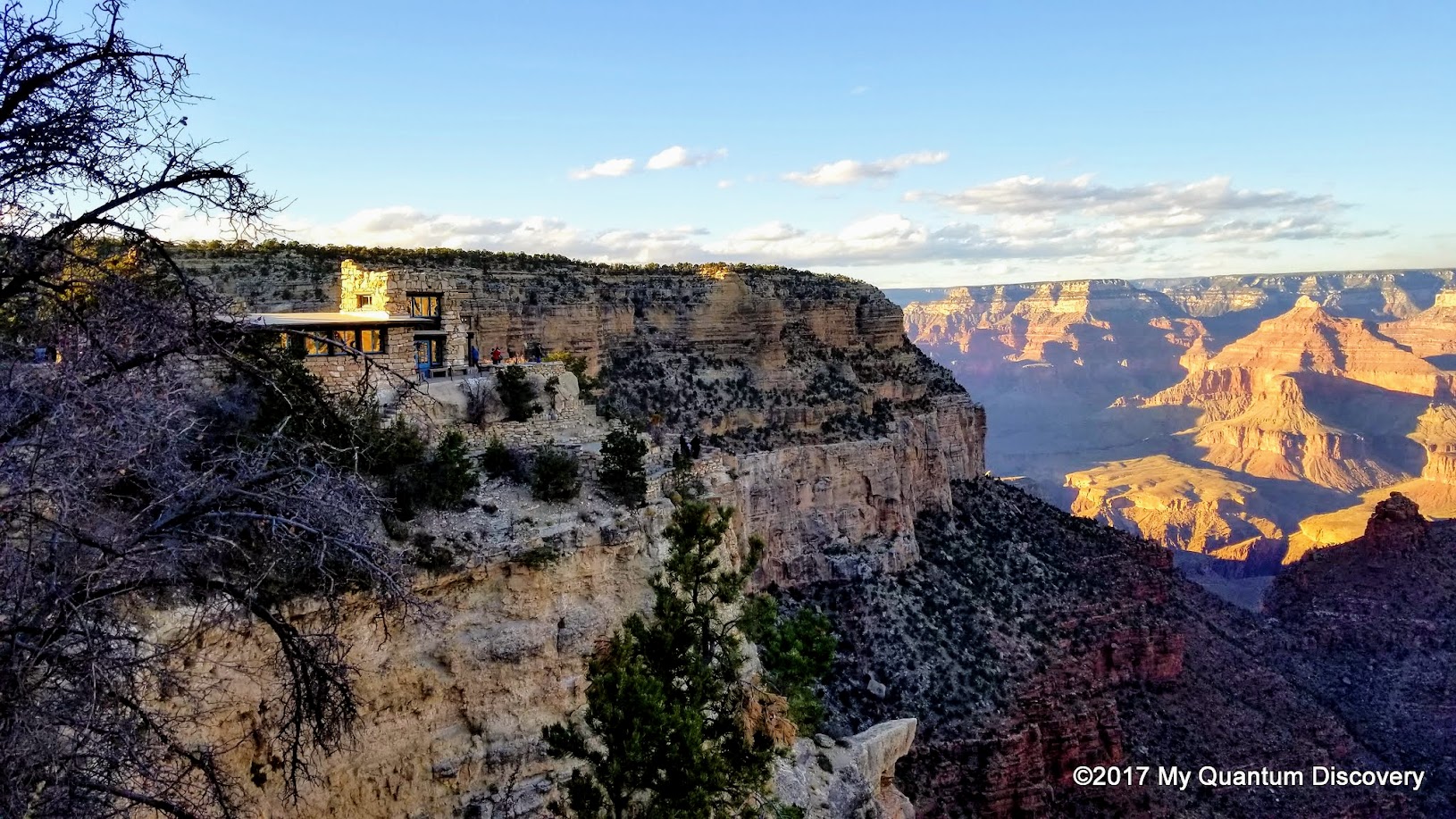 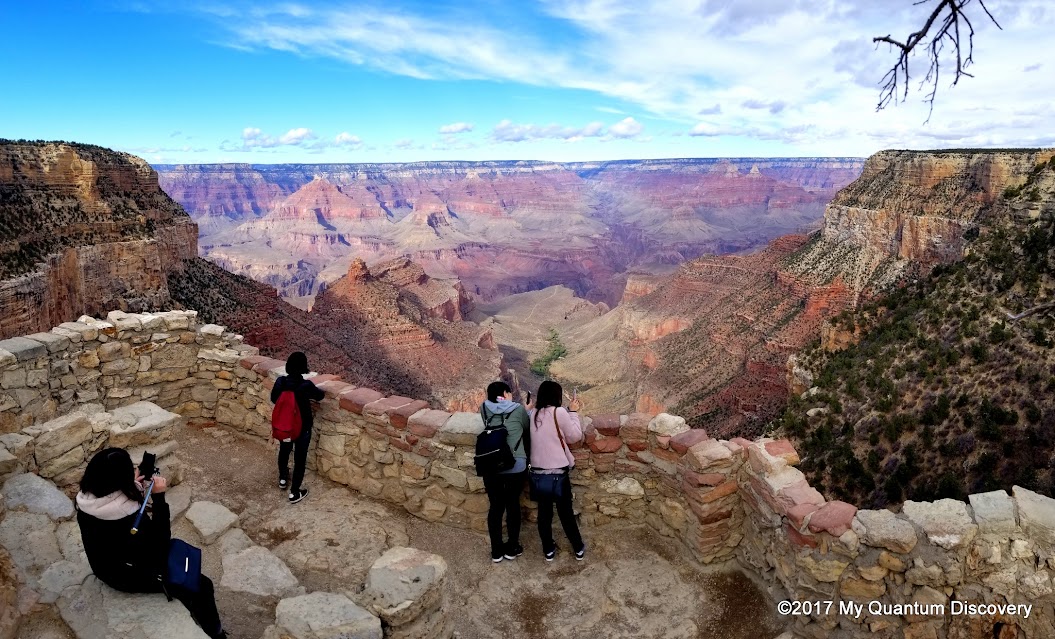 Inside there are several levels supported with posts, beams and ceiling joists constructed from logs, exposed stone walls and a small fireplace. A small stairway leads up into the small enclosed observation tower or heads down from the building’s main level to an exit that opens to an exterior observation area. What spectacular views, not only of the canyon but we could even see mules and hikers along Bright Angel Trail! Or perhaps visitors might even see a California Condor flying nearby. No such luck on this trip but we did see one on our trip here in the 90’s. Not the prettiest bird but with a wing span of 9 feet, it is quite magnificent! 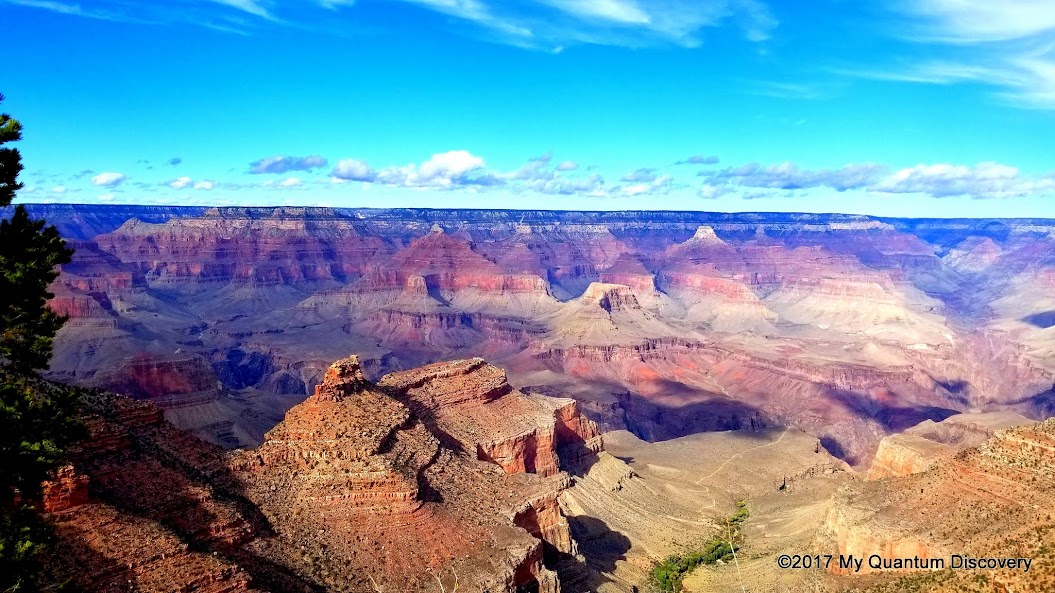 Photographic prints and books related to the Grand Canyon and other traditional souvenirs are offered for sale.

With the increased visitation to the canyon after the arrival of the train in 1901, this iconic lodge and its cabins has undergone many transformations over the decades – from its original hotel built in 1896, then a camp and finally a lodge. In the early 1930’s, the Atchison, Topeka & Santa Fe Railway asked Colter to design a fresh look to the facility so as to provide a more moderately priced lodging than the El Tovar to visitors. 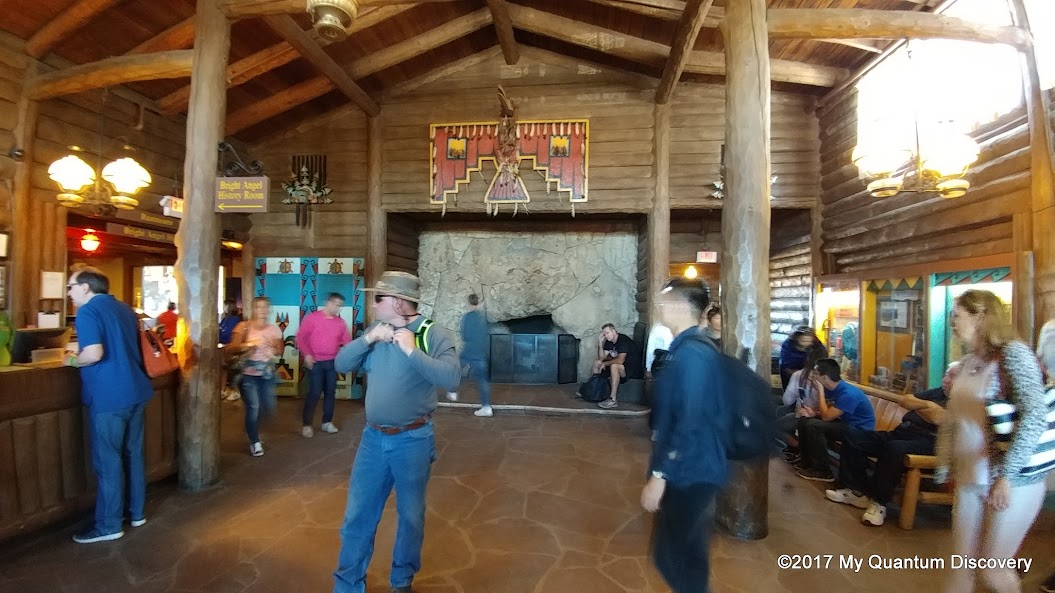 One of Colter’s inspirations was the Geologic Fireplace (pictures of it can be seen here) which features all of the rock layers of the Grand Canyon, from the river cobbles to the youngest stone strata on the rim. Colter had all of the stone gathered or cut from the canyon walls and brought up by pack mules for her project. She also insisted that The Buckey O’Neill Cabin, built in the 1890’s and originally home to one of Roosevelt’s Rough Riders, and the Red Horse Station, built in 1890 which served as the post office for 20 years were not demolished.

Today Bright Angel has 90 lodging units ranging from cozy historic units with shared bath to standard lodge rooms, historic cabins such as the “Red Horse Station” to the one of a kind “Buckey O’Neill Cabin”.

We had one more famous (and our favorite) Colter structure as well as a museum to visit but that would require a drive to the eastern edge of the canyon. More about that in our next post.