Sitting at the far eastern edge of the Grand Canyon National Park is the Desert View Watchtower, our favorite Colter architectural masterpiece and the last one we would visit during our 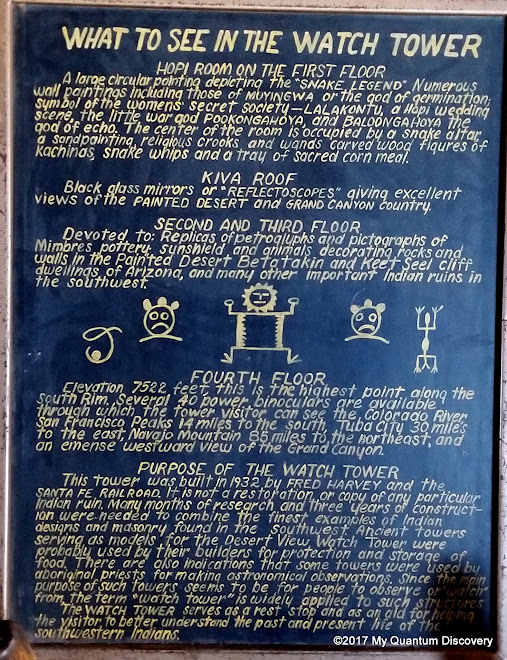 stay. Assigned by the Fred Harvey Company in 1931 to design a gift shop and rest stop with a desert view, Mary Colter, after much research on Hopi culture, based her design of the watchtower on structures built by the Ancient Puebloan People of this area, such as the nearby ruins at Hovenweep and Wupatki.

According to the National Park Service website, she said “First and most important, was to design a building that would become part of its surroundings; one that would create no discordant note against the time eroded walls of this promontory.” To obtain this result she insisted that the rocks not be cut or

worked, so they would not lose the “weathered surfaces so essential to blend it with the canyon walls”.

The four-story, 70 foot tall structure which was completed in 1933 served as a tourist attraction for the Fred Harvey Company and functioned partly as a curio shop, but also as a museum and showcase of Hopi culture, craft, and symbolism for an American public increasingly curious about the Southwest and its native people. It is built around a modern concrete and steel reinforced superstructure which then had a veneer applied of carefully selected natural stones.

Tough taskmaster and perfectionist that Colter was, each stone was hand picked for size and appearance and if the workers completed a section that didn’t achieve the appearance that she wanted, she would make them tear it down and start all over again! Must have been tough on the workers, but the end result was just what she wanted to achieve – a new modern structure that looked like it had existed for hundreds of years! 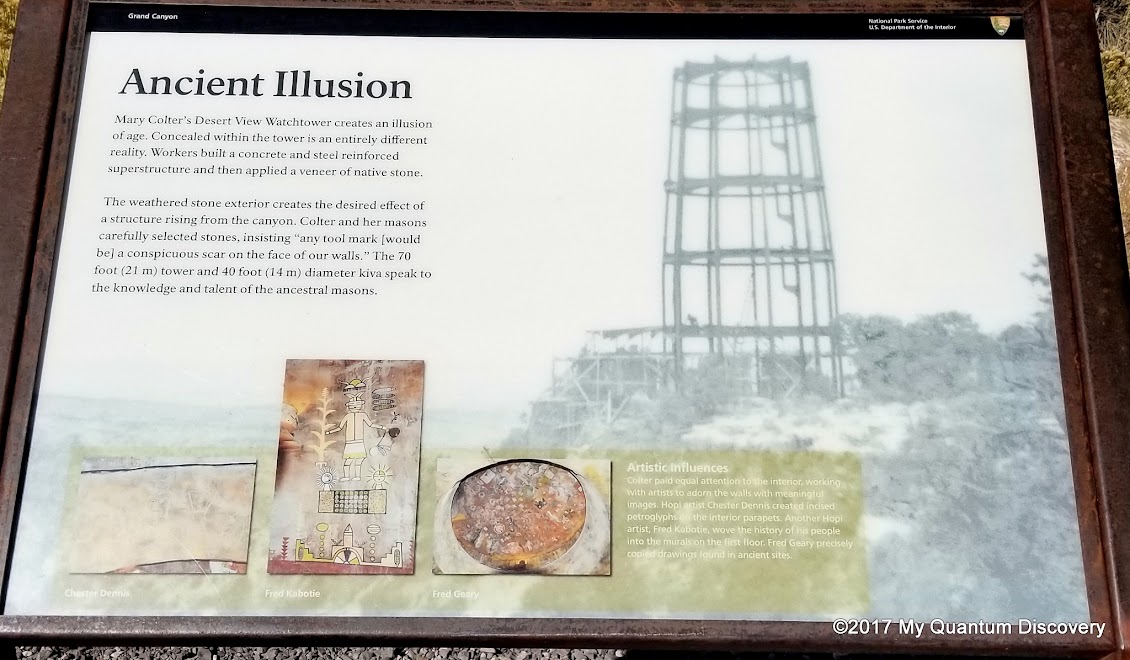 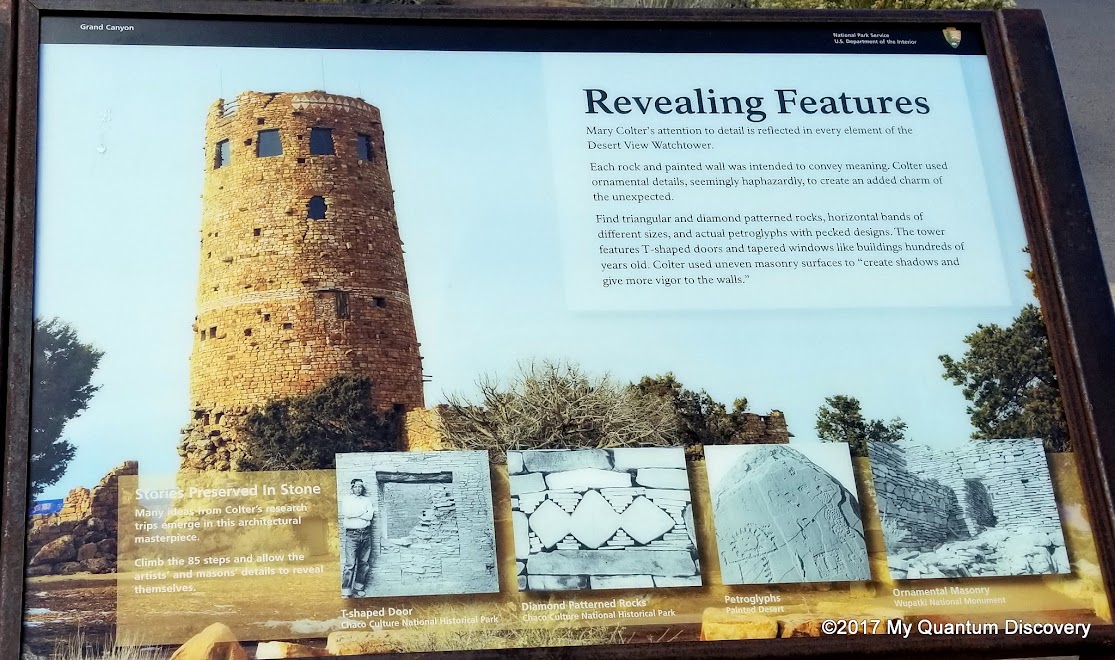 Because it was said that the completed tower was bigger than any known Anasazi tower, one of the interpretive signs indicated that Mary Colter stated that it “is not an exact reproduction of any known ruin but rather is based on fine examples of the prehistoric workman and is built in the Indian spirit.”

A 40 foot in diameter circular structure meant to resemble a kiva (a ceremonial room used in spiritual practices) was located next to the tower. As we walked into the kiva, we were not only struck by the size of this circular room and the huge windows but also by the ceiling which is made up of logs salvaged from the old Grand View Hotel on Horseshoe Mesa at the Canyon. These logs are laid out in a pattern found in prehistoric native American architecture and still used in some Indian structures today.

Interesting that this room features several “reflectoscopes”. The sign says “These ‘black mirrors’ are called reflectoscopes. A great French landscape painter named Claude Lorrain invented the reflectoscope in the 1600’s to condense and simplify the view he was sketching. It was originally made of highly polished black onyx. Very strong light tends to wipe out color while mild light shows it up better – so with the Grand Canyon’s image reflected from this black glass, the color seems stronger.”

The Kiva Room was originally designed as a rest area so that visitors in the 1930’s could sit in comfort and have outstanding views of the canyon, but over the years it has been used for retail space. The good news is that on January 1, 2015, the National Park Service took over management of the building from Xanterra (Fred Harvey Company) with the intent of restoring Mary Colter’s original vision of the building. Great idea – goodbye souvenirs!

Upon entering the Hopi Room inside the tower, it was hard to know what to look at first! Standing in the center of the room and looking up the open shaft we could see the ceiling of the top level – it was painted by renowned Hopi artist Fred Kabotie as was the Snake Legend Mural which explains the connection of the Hopi Snake Clan to the Grand Canyon. Other murals of his depicting various aspects of Hopi mythology are found in this room as well. A snake altar, a sandpainting, carved wood figures of kachinas and snake whips also adorn the walls of the Hopi Room. 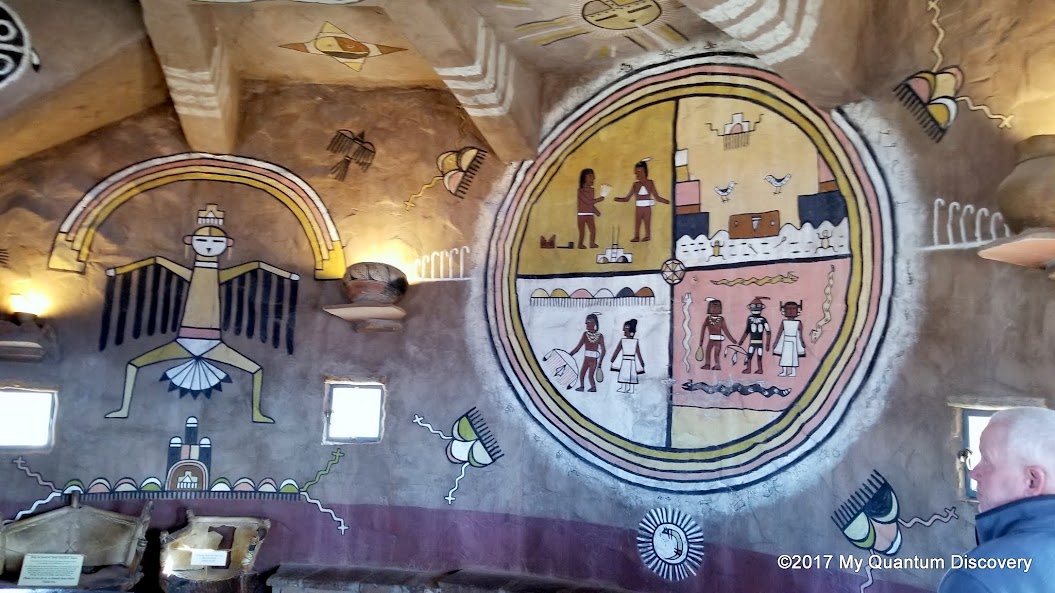 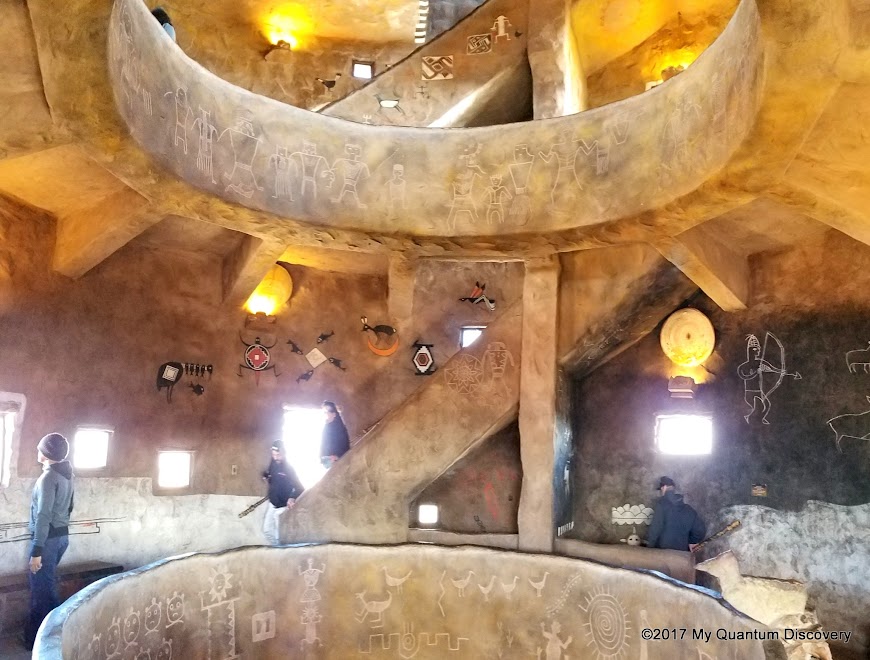 At an elevation of 7,522 feet, the fourth floor observation area is the highest point on the South Rim. As you can see, unlike the first three floors which are built around the open shaft, it has a full floor and large glass windows with gorgeous views of the surrounding landscape. There is no decor here because Mary Colter felt that it would detract from the views. The wooden ladder leads to the rooftop observation area but it is closed to the public. 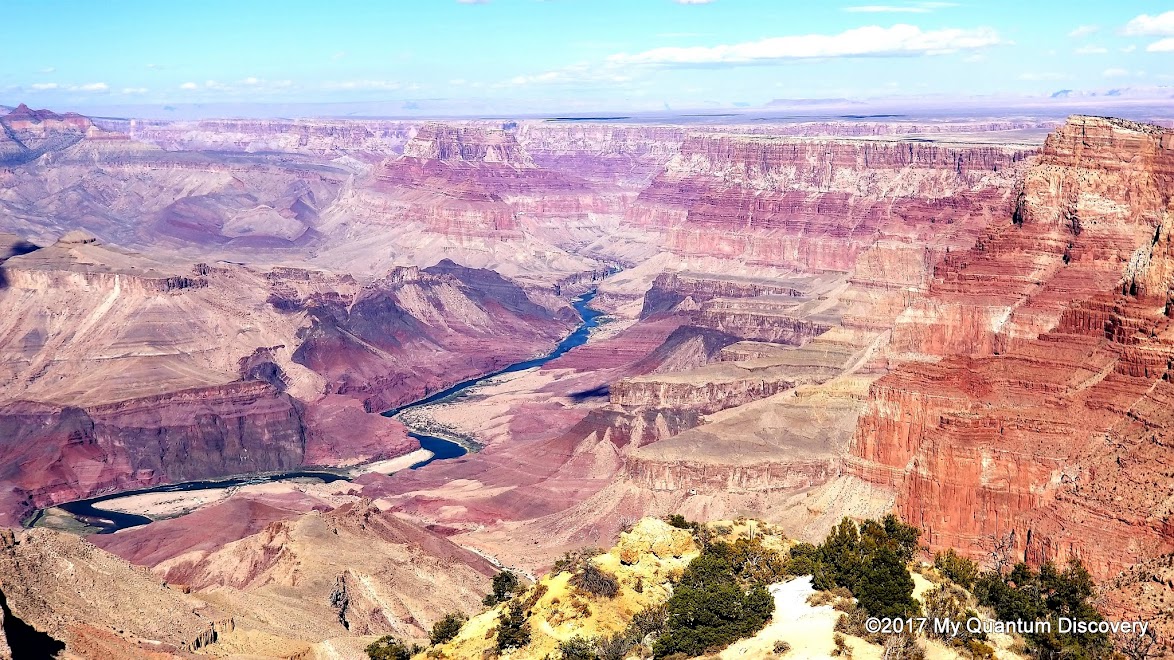 Wandering around outside, we were saddened when we stopped to read a sign titled “Tragedy Remembered“. It was near this spot on June 30th, 1956 when two airliners, a United Airlines Douglas DC-7 and a Trans World Airlines Lockheed L-1049 Super Constellation collided at an altitude of 21,000 feet above Temple and Chuar Buttes within the boundaries of Grand Canyon National Park. All 128 on board both flights perished. This crash led to sweeping changes in the control of flights in the United States and the establishment of the Federal Aviation Administration (FAA). The location of the crash has been designated a National Historic Landmark. What a tragedy! 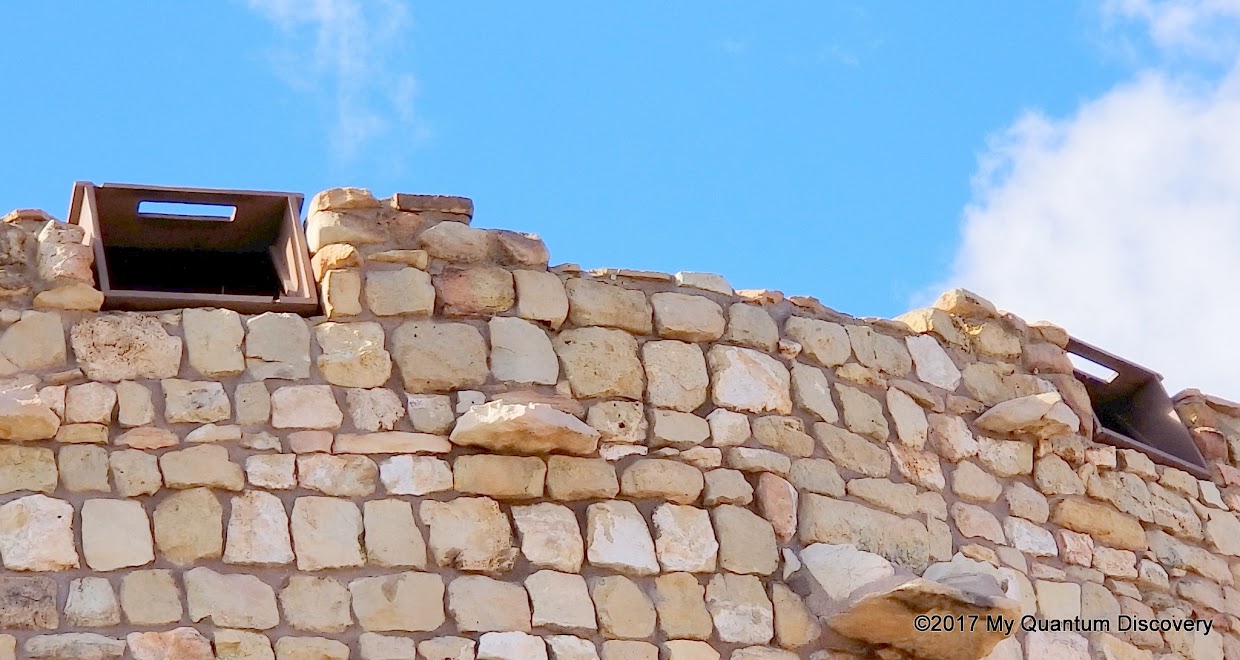 The Watchtower Stairs are open daily from 9 a.m. to 4:30 p.m. Admission is free but be prepared to walk a quarter mile (or more) on a paved trail from the parking lot to the Watchtower. Along the way, there are rest rooms, a market and the Trading Post Snack Bar. There is also a gas station located nearby. For a 360° view from the top of the tower, you must climb 85 steps.

The National Park Service has a series of eight in depth videos about the Grand Canyon. There is one on the Desert View Watchtower which is quite interesting as the ranger talks about how it was built. It also has aerial views of the Watchtower which are neat. Each video is under 10 minutes in length, time well spent especially if you plan to visit the canyon in the future.

Finally it was time to leave the Watchtower but our day long excursion wasn’t quite done yet. Stay tuned! 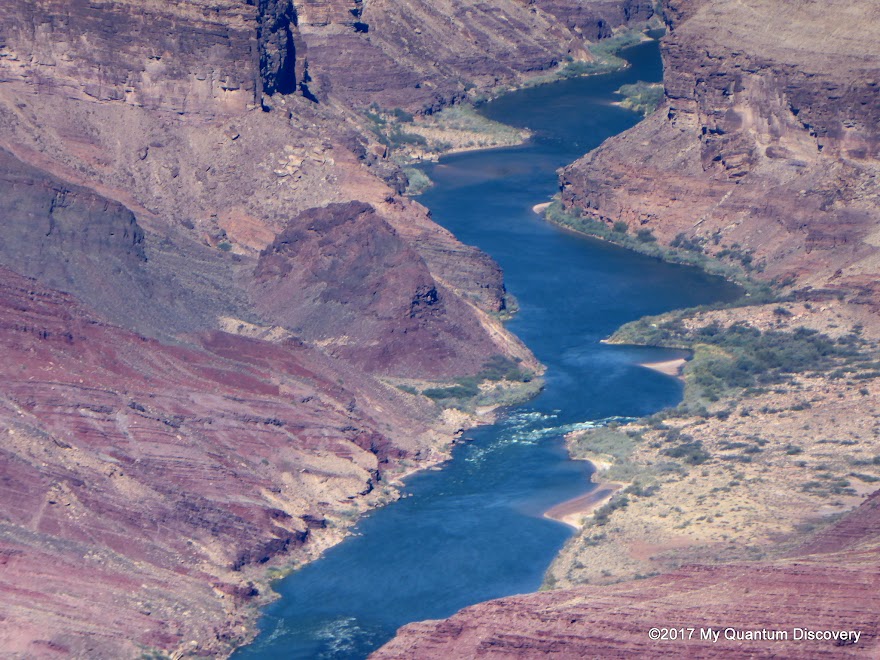 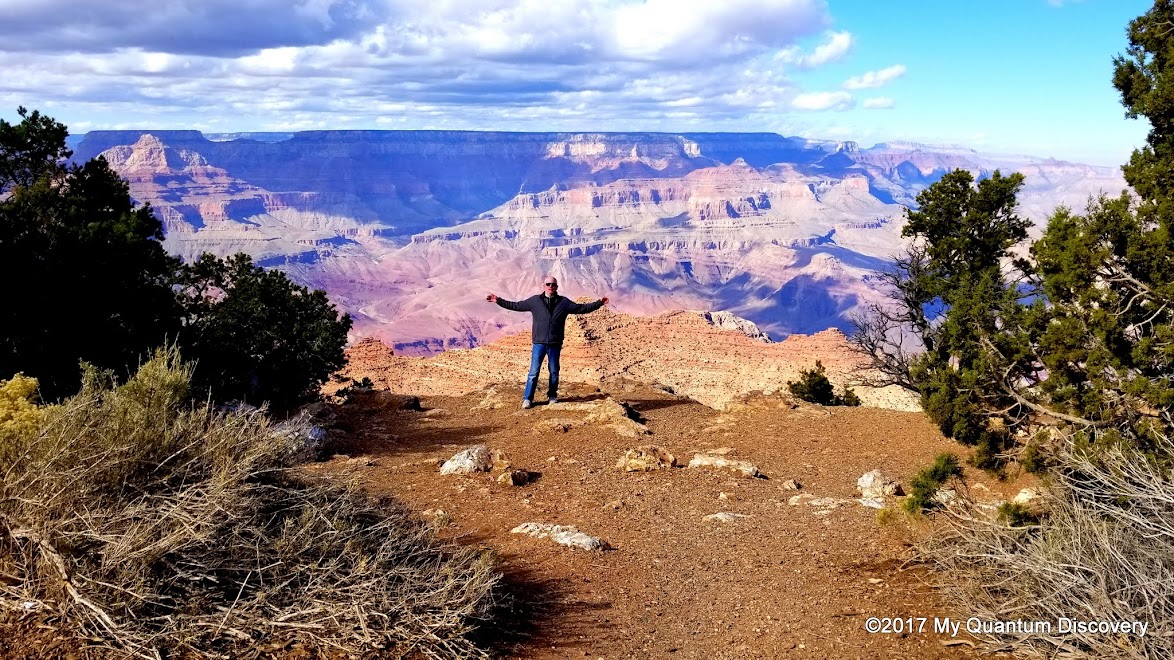