Once all the suicidal remains of the love bugs had been carefully removed from the front of our coach during our one night stay at 4 Lakes Campground in Hastings, FL, we were anxious to continue our journey north to get as far away from those critters as we could.

Our next destination would be another campground we have stayed at several times before – Blythe Island Regional Park in Brunswick, GA. 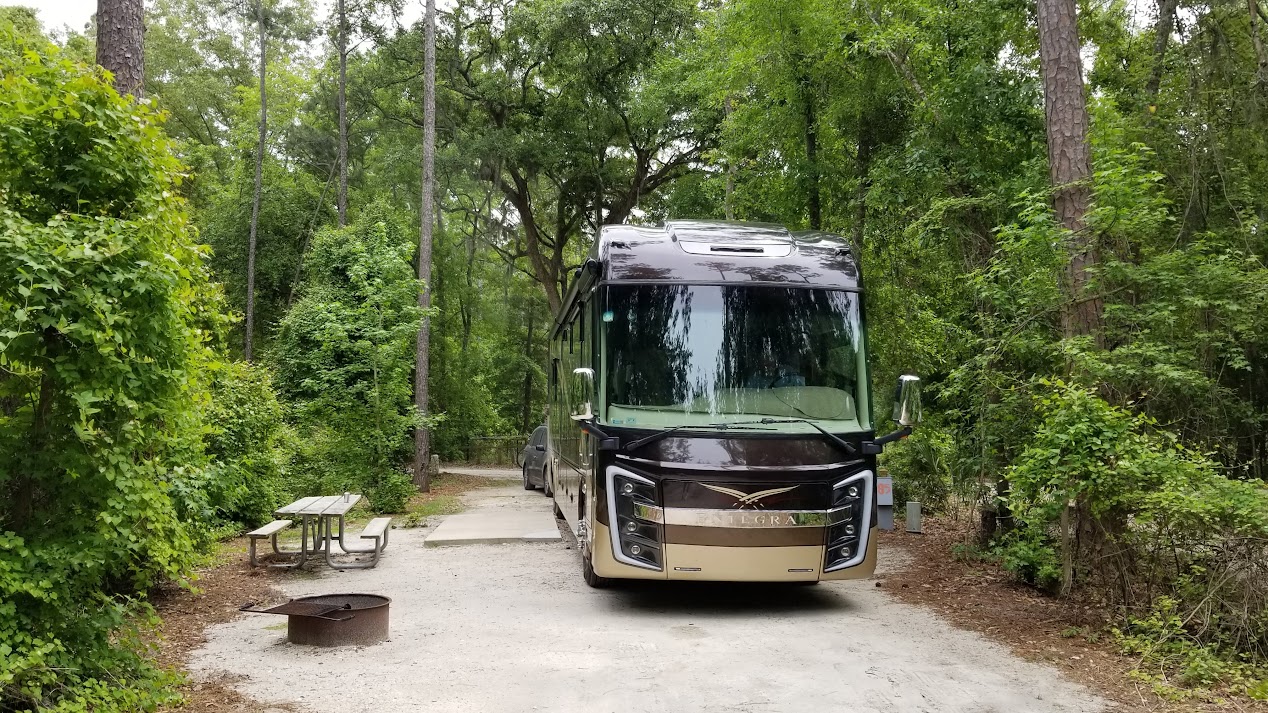 In 2012, we stayed at this campground in our very first RV, a 2006 Fleetwood Discovery, and explored St. Simons Island and Fort Frederica National Monument and the fascinating Georgia Sea Turtle Center. In 2013, we stayed here again, despite the lovely stench from the paper mill and exhausted ourselves biking around Jekyll Island. Hard to believe we did all that six years ago, seems like just yesterday!

Nothing much had changed at the campground. And yes, the stench was still there if the wind was blowing towards the campground. But that didn’t matter, we still like this campground with it’s long, spacious and private drive thru sites. First time visitors here in a big rig might be a little spooked by the narrow unpaved roads and thick tree cover, but not to worry take your time and all will be fine. On this visit our site #85 had an added Easter amenity – black and gray bunnies, much to the delight of our fearless kitty king, Sparky. Having been here and done this before, sightseeing wasn’t our main focus during our stay except we did pay a visit to the St. Simon’s Pier Village District where we had a delicious breakfast at Palmer’s Village Cafe. Rob thoroughly enjoyed his Vermont Cheddar & Ham Omelet ($7.95) while I enjoyed the special of the day – salmon served on zucchini noodles with two eggs. Both were eggs-cellent! 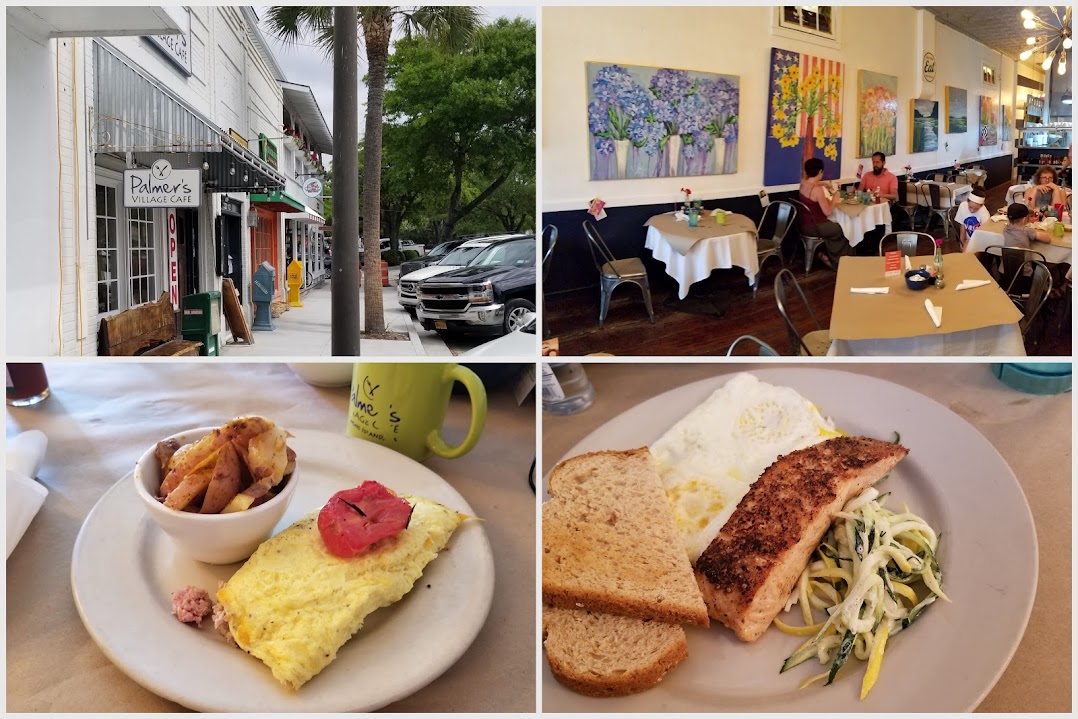 After breakfast we walked around town, then over to Neptune Park, stopping at the St. Simons Island Pier where we enjoyed the view and watched people catching fish and crabs using chicken for bait. From the pier there is an excellent view of the 104 foot, still operational St. Simons Lighthouse & Museum which was built in 1872. Visitors can climb the 129 steps to the top (we didn’t). Tickets are $12.00. 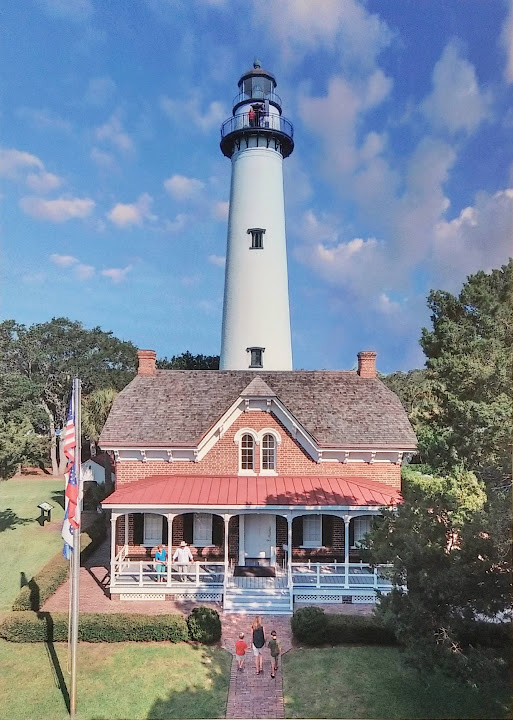 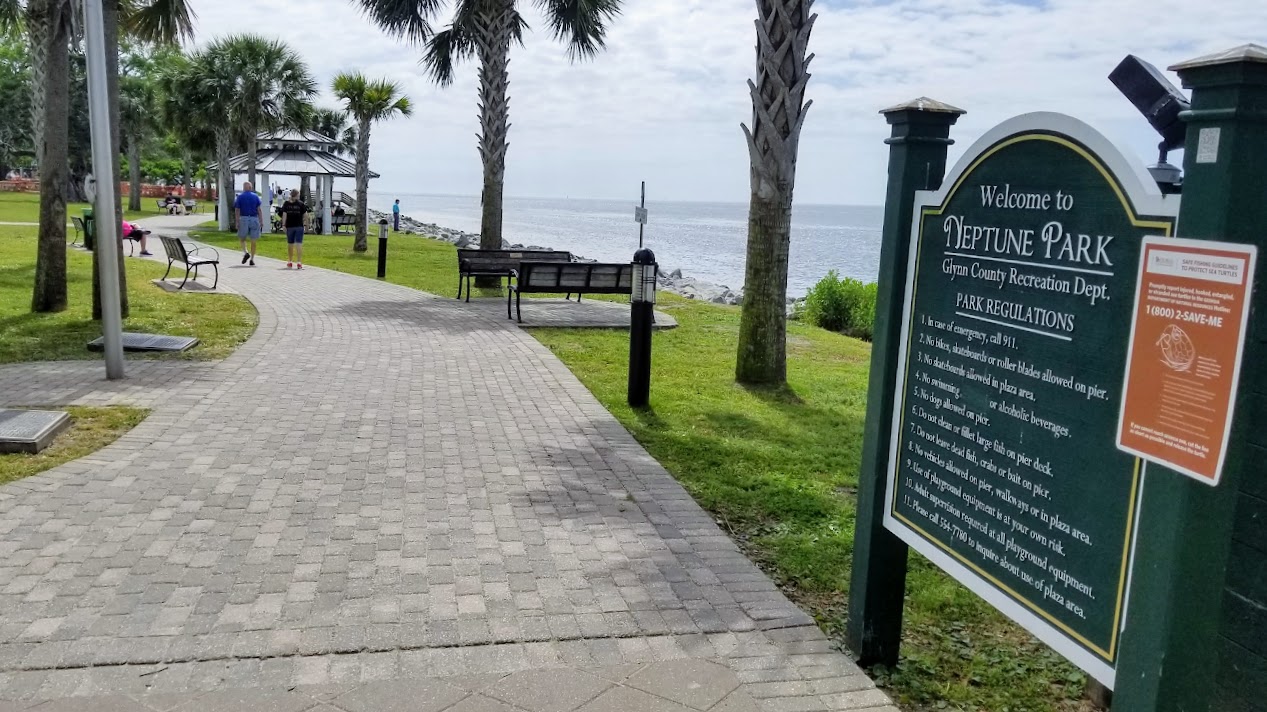 At the nearby Visitor Center, we discovered information about the Tree Spirit Scavenger Hunt.  In the 1980’s a skilled craftsman named Keith Jennings, carved his first tree spirit on one of the island’s famous oak trees. To date, he has carved more than twenty tree spirits (only seven are on public land) throughout the Golden Isles by using hand tools, such as a mallet, to shape the expressive faces. The carving process of each tree spirit takes an estimated 2-4 days. The one closest to the Visitor Center, the Mermaid, caught our attention. 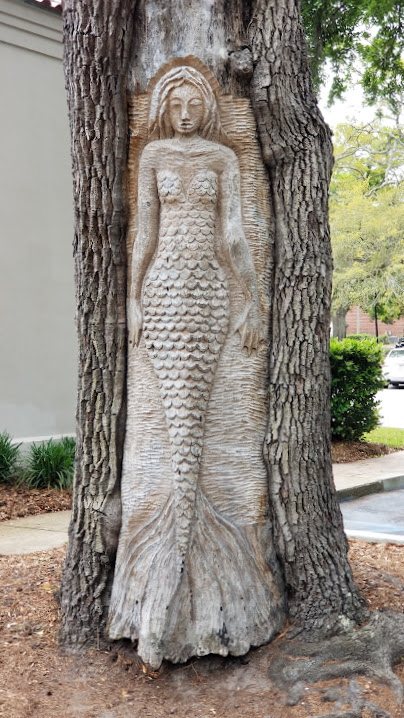 Severe weather was in the forecast for the Brunswick area on the day we had planned on leaving (April 19th). Not wanting to travel under those conditions, when we returned to the campground we stopped by the office to see if we could extend our stay by one day. Luckily we could.

Since the storms weren’t supposed to hit until later the next day, we headed out to Cafe Frederica for breakfast in the morning. At the recommendation of our server, I ordered the Crab Cakes Benedict ($12.95) which was delicious while Rob had the specialty of the house, Blueberry Stuffed French Toast ($8.25), an unusual choice for him since he tends to avoid sweet stuff for breakfast. It did earn his nod of approval. 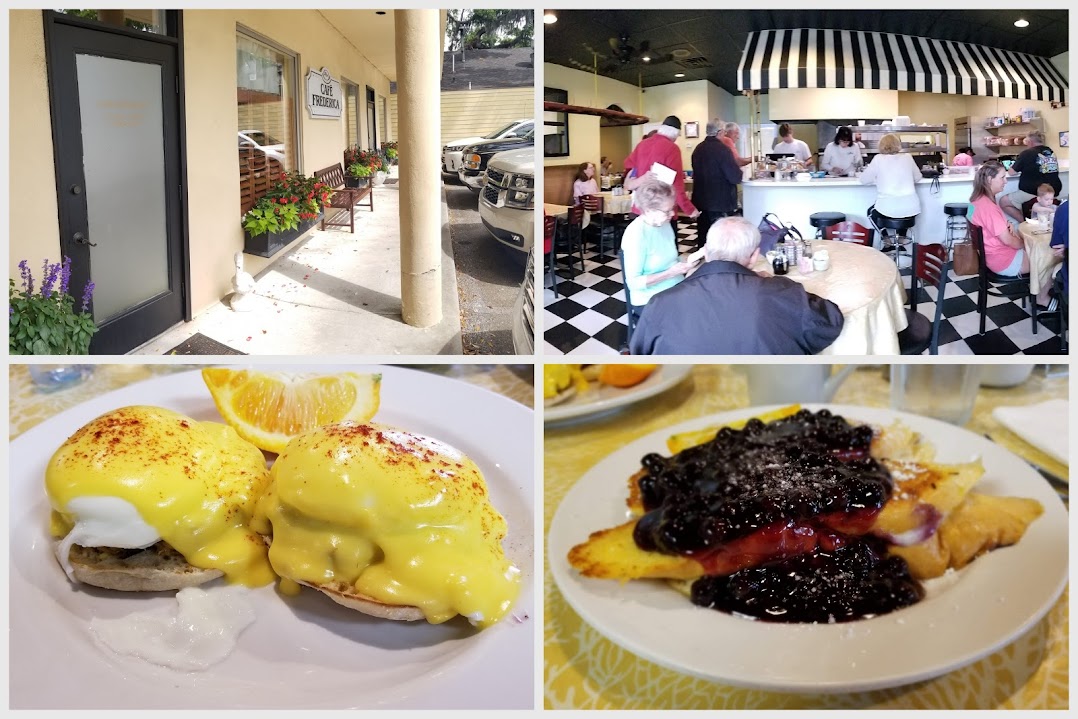 By the time we arrived back at the campground, a little past noon, we were under a severe thunderstorm warning, lightning alert, strong wind alert and a tornado watch. Yikes! Time to pull in the slides!

Then it started – thunder, lightning, gusty winds and torrential rain. Fortunately I had called the office earlier to find out where we should go in the event of a tornado and was told to head for either of the two bathhouses.

When the tornado watch turned into a tornado warning, it was time to throw Sparky into his carrier, leave everything else behind and head to the bathhouse. Gulp!

We were surprised when we arrived that there was no one else there. Were we in the wrong place? Yep, turned out we were – we had gone to the rest room building instead of the bathhouse by mistake. Oh, oh, let’s hope being here offers us some protection – it’s too late to move. Thank goodness, within a half hour the danger had passed so we returned to the coach. Who needs such excitement!

The next day we were back on the road again in much better weather although it was still quite windy. It would be a four hour drive to our next destination, Bass Lake Campground in Dillon, SC.

No sightseeing here, just a quiet one night stay, close to the interstate, easy in and out, at a good rate (PPA $18). But our next stop will be much more interesting!