Mayberry? Really? Is Mayberry an actual town? Or is it only a figment of our imagination? Or does it only exist within the confines of the television studio where the Andy Griffith show was filmed back in the 60’s? No, Mayberry, NC does not exist but another town,Mt. Airy, NC has successfully captured the essence of the idyllic town of Mayberry. It was to be our next destination.

When we made our reservation at Mayberry Campground, we didn’t know what to expect.  Yes, we knew that Mayberry was the idyllic, fictional hometown of Andy Griffith, Opie, Barney,  Aunt Bee and Gomer Pyle on The Andy Griffith Show, a very popular TV show from 1960 to 1968. 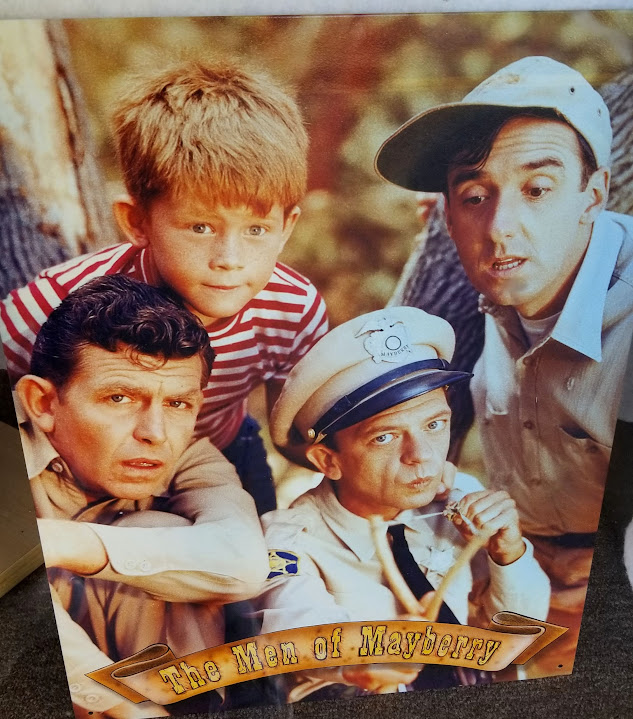 But what we didn’t know was that Mayberry was based on Griffith’s hometown of Mt. Airy, NC and that this town had transformed itself into a major tourist destination because of the popularity of that show.

One of the reasons for staying at Mayberry Campground was that they offer the usual assortment of discounts on their $38 daily rate (10% for Good Sam, AAA, Military) as well as Passport America which was good for up to 2 nights (Monday through Thursday) within a 30 day period (note the PA rate must be paid in CASH). Since our stay was for three nights, our cost was $38 for two nights and $34.20 for the additional night.

Making our way to our site (#16), we passed Andy Taylor Street, then just before Opie Taylor Lane, we turned onto Barney Fife Boulevard. Yep, I guess we were in Mayberry land! 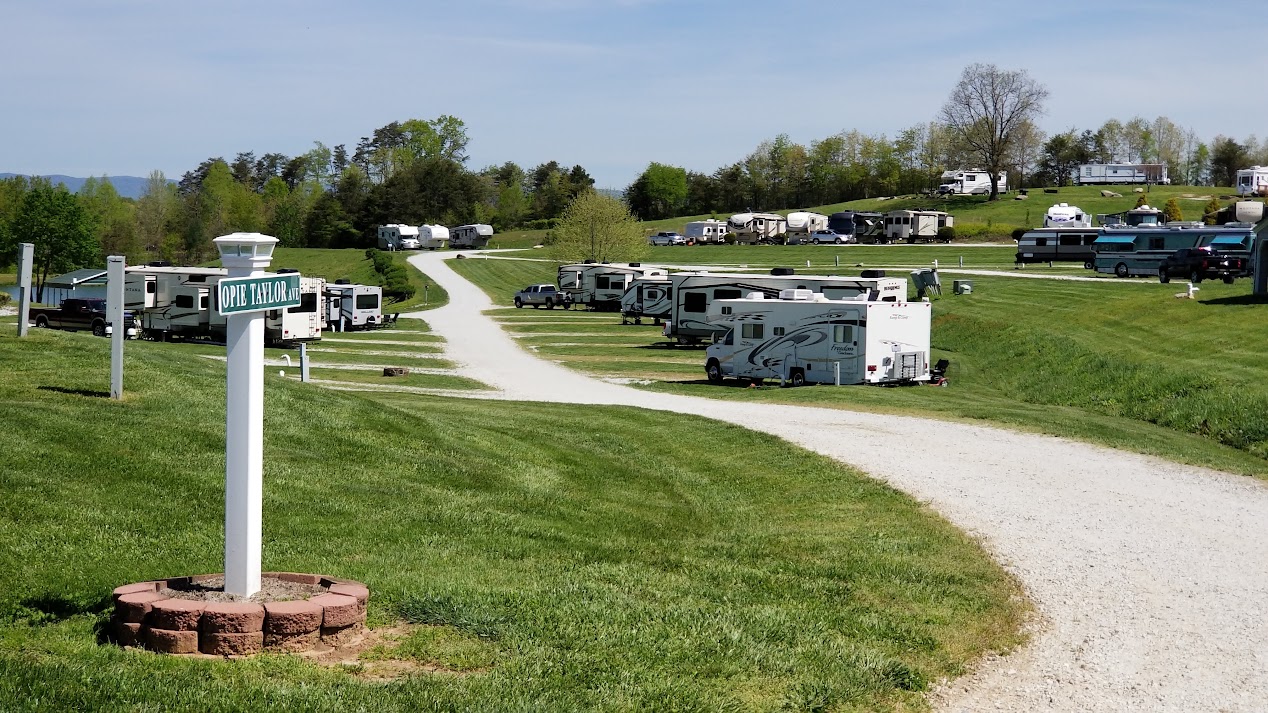 Except for the lack of trees, it was a very nice campground. Our gravel back in site was quite long with a fire pit and a round stone table with attached benches. During our stay a staff member added an umbrella to the table which helped provide some shade (note not all sites have these tables). Our only complaint about the site was that it was quite unlevel, there was almost a foot of elevation difference between the rear axle and the front axle. Our front tires were off the ground and it was a pretty big jump from the bottom step to the ground! 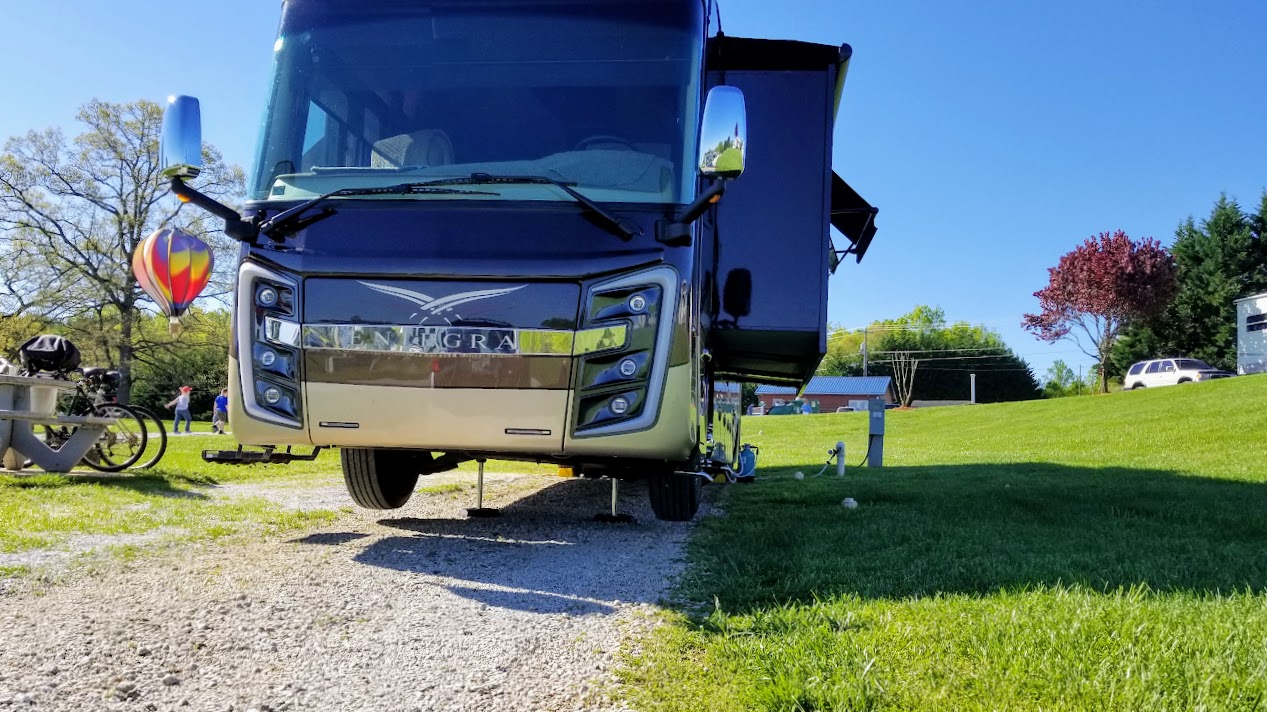 Not only did the town of Mount Airy have a lot of history, the campground had an interesting past as well.

The land that the campground was built on was part of a 2,000 acre farm that was owned by the original Siamese twins, Eng and Chang Bunker who were conjoined at the sternum. The twins were born in Siam in 1811 but settled in Mount Airy in 1845 after traveling the world as a sideshow act. Here they became very successful farmers.

Within the campground property there is a white farmhouse that was built by Eng’s son, William Bunker in 1900. Their descendants (over 1500 of them) now live across the country but return for regular giant family reunions. Several of the people who work in the campground are direct descendants of the twins. Check out this video produced by CBS Sunday Morning to learn more about their history and their descendants. 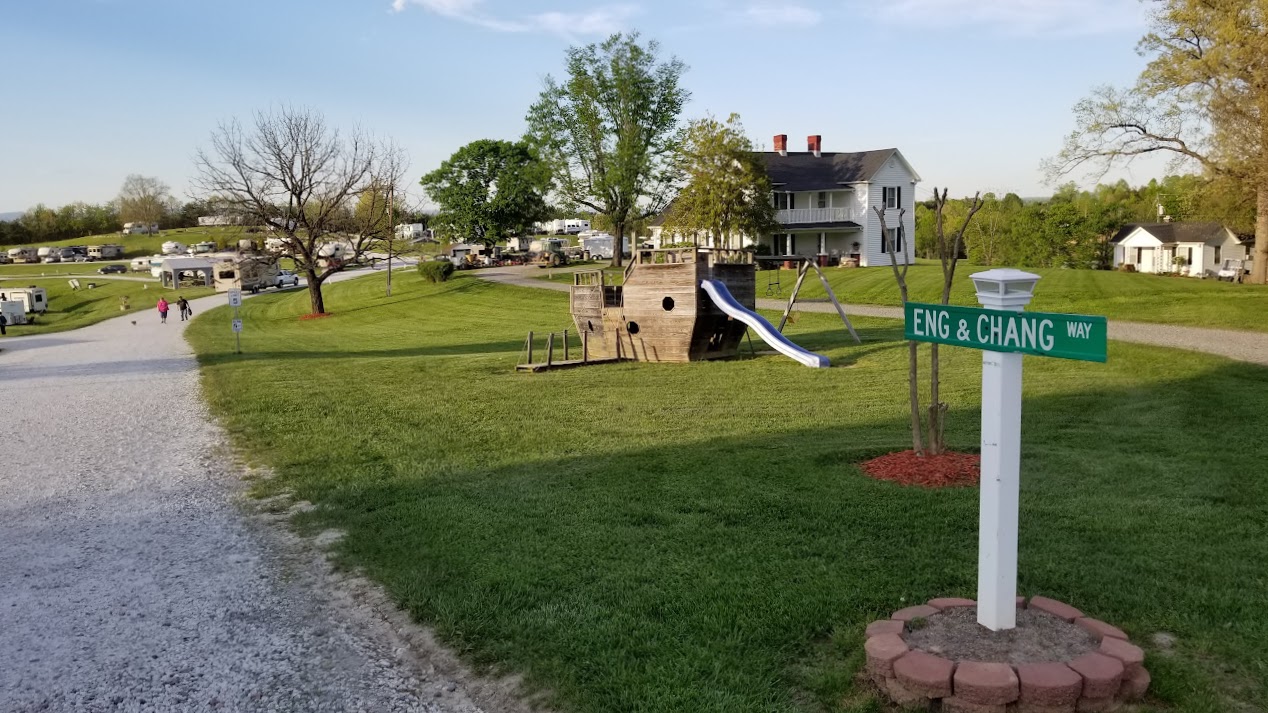 The next morning we were off and running in sightseeing mode. Boy, were we surprised by how much there was to see and do in the cute town of Mt. Airy! But more about that in our next post!