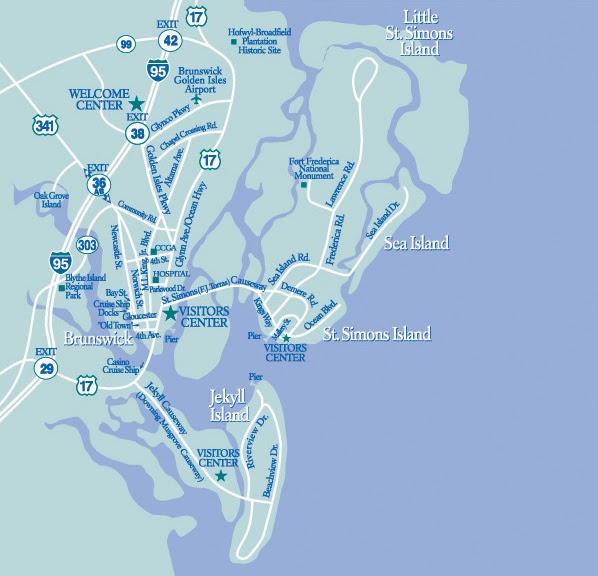 After our few days of rest and relaxation, on Friday, November 22nd, we were anxious to re-explore the Golden Isles, starting with a bike ride on Jekyll Island.  The weather forecast sounded fairly decent with temps in the mid-70’s and sunny so it seemed like it would be a perfect day for a bike ride.  Back in January of 2012, we had stayed here for a couple of days and had spent a day biking all over the island so some of this may sound repetitive and the photos may look familiar.

Jekyll Island has a 25 mile network of bike trails allowing visitors to travel alongside lush marshland, near beautiful beaches and through the legendary historic district. The paths are wide, paved and very well maintained, in fact

Enjoying Jekyll Island is not a free proposition.  Vehicle entry to Jekyll Island requires a valid parking pass (single day is $6 – it was $5 in 2012) which must be purchased at the Pay-In-The-Lane System (no people involved anymore) using either cash or credit card or at the Guest Information Center. At least there is no per person charge. In any case if you are ready to spend some time here it is well worth the 6 bucks.

Since we haven’t done any extensive bicycling since 2012, this time we decided not to abuse ourselves by bicycling all over the island.  The historic district would be our focus.  But we did want to refresh our memories so a tour of the island by car was the first order of business.  As we drove past the historic district we decided to take a quick ride into the Jekyll Island Campground to see if it looked any

The location is great since it is close to the bike paths and the beaches, but the campsites don’t look big rig friendly, are fairly short and pretty close together and it just has an overall dreary and gloomy feeling with lots of seasonals. Plus it had rained overnight and everything was very muddy.  Also note there is a additional “large vehicle” charge to get onto Jekyll that I think was $10 and many of the roads here are not suited to big rigs with lots of low hanging branches and such. Blythe Regional Park may be further from everything but it appears to be better maintained and with the wide, long pull thrus and lots of privacy, it has much more to offer at a lower daily rate – $36 vs. $44 at Jekyll Island (note both have weekly rates).

As we continued our journey, we passed by the Georgia Sea Turtle Center. It was tempting to once again visit this very informative and educational place, dedicated to rescuing and saving our dwindling sea turtle population but we decided to skip it and focus on our original plan. First time visitors here though shouldn’t pass this up.

Driving on, our first stop was the area near Driftwood Beach which is on the northern tip of the island with views out across the channel of St. Simon’s island. Walking out on the huge cement pier, we stopped to talk to an older

We decided not to walk over to

Driftwood Beach since we had been there before. Just as we were walking back to the car, we noticed a huge ship coming towards us which we initially thought was some type of tour boat.  Turns out it was the Emerald Princess which is a floating casino!

Leaving the pier and Driftwood beach, we continued our tour, heading along North Beach View Drive, stopping at the  Beach View shopping plaza, not to shop but to enjoy the view.

Well, I really shouldn’t call it a shopping plaza – it’s more like a group of temporary trailers that have been turned into permanent stores.  There’s even a post office. We sat for a bit on some steps leading down to the non-existent beach (due to the high tide) watching the waves roll in – this side of the island is open to the Atlantic. Always

so relaxing listening to the pounding surf!

A short distance from the shops is Great Dunes Park.  Neither one of us remembered this from before but apparently it opened in

2010 so it was there when we were here before.  This park is conveniently located across the street

from a playground, mini-golf course, bike rentals, Segway rentals and is a great place to setup day camp for a day trip to Jekyll Island.  This park is also frequently used as the site to release rehabilitated sea turtles from the Georgia Sea Turtle Center. Right next door to the Park is the new 128,000 square foot Jekyll Island Convention Center

which just opened in May of this year.  Pretty impressive!  There’s quite a bit of development happening close to the center, a new hotel and shopping center are currently under construction.  Hope this doesn’t take away from the beauty of the area.

By the way, while there is a nice stretch of beach here it by no means compares with the miles of prime sand along the Grand Strand (Myrtle Beach) area.

Finally back near the historic district, we pulled into a parking lot

near the historic wharf, ready to expend some of our own energy pedaling around the historic district.  Since much of this area is closed off to vehicles the only way to see all of the historic buildings is to either walk or bike. If you stay in your car, you’ll miss most of the good stuff! The grounds are beautiful!

Being a weekday, it was pretty deserted, I think we only saw two other couples on bikes and just a few people walking around. We pretty much had the area all to ourselves!

purchased shares for $600 each to become members. Membership was limited to 100 to ensure the exclusivity of the club.

The wealthiest of these wealthy also built their own winter homes or “cottages” where they would come with their families to escape the winter and to enjoy such activities as hunting, biking and

horseback riding while in the company of their social equals. Interesting to note that in an effort to promote social interaction, none of the cottages were allowed to have kitchens – the members were expected to dine at the club where a staff from Delmonico’s in New York prepared the meals.

Besides being a playground and winter retreat for the wealthy, several historic events took place here. It was the site of the first

transcontinental phone call  from AT&T president Theodore Vail on January 25, 1915.  Meetings that led to the formation of the Federal Reserve System were held on Jekyll in 1910.

I could write a lot more about Jekyll Island and it’s history but I won’t (OK, you can all let out a collective sigh of relief now).  Best to read about the history on the Golden Isles website or if you are really interested, Google Jekyll Island history,  read our 2012 post or better yet just plan a visit here.  If you do visit, a variety of tours are offered including  a “Passport of the Century” tour which is a 1-1/2 hour tram tour including entry into two of the cottages for $16 or a go at your own pace E-Guide tour (works with a portable device) for $8. We didn’t do either since we were on our bikes…next time!