What did I say in a previous post about not finding things to do? Our week actually turned out to be quite busy seeing all the places that Schoodic had to offer! Our first sightseeing route had us taking a left from the campground onto the 6 mile one way Loop Road where our first stop was Frazier Point, a popular picnic area and fishing spot. If you go, be aware that RV’s must turn into the campground, they are not allowed on the Loop Road.

“For thousands of years, this was the location of an Indian summer campsite. It is named after African-American Thomas Frazer, the area’s first non-Indian settler. In the Gouldsboro census of 1790, Thomas is listed as being settled here where he established and operated a Salt Works company to sell salt to passing ships.”

Beautiful sunsets can be seen from here.

A short distance further on the Loop Road is what used to be a former Navy base active from 1935 – 2002, and is now the Schoodic Institute. The Institute supports science and education initiatives throughout the Park and the region and partners with the National Park Service to manage the Schoodic Education and Research Center (SERC) campus. SERC is one of 19 National Park Service Research Learning Centers in the United States. 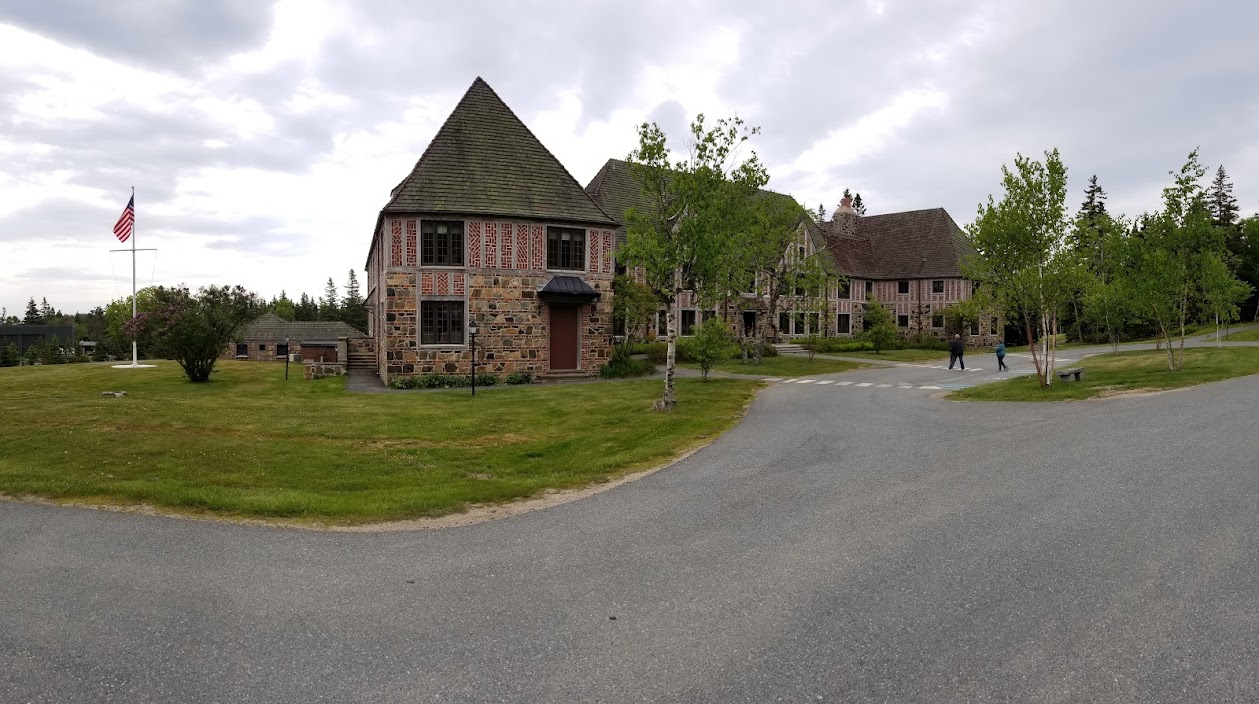 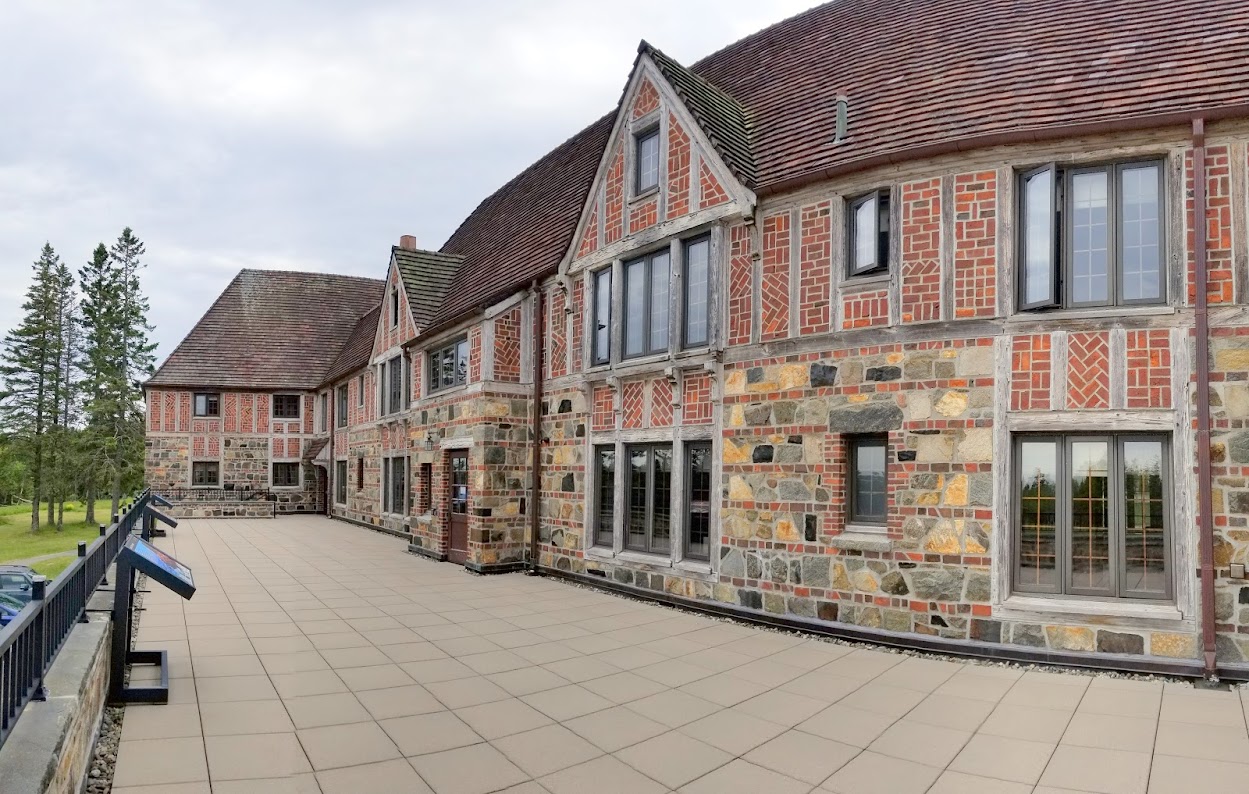 Since it is open to the public, we stopped at the very impressive Rockefeller Hall which was built in 1933-1934. As soon as we entered a volunteer docent greeted us and began telling us the fascinating history of the building. When John D. Rockefeller wanted to expand the Park Loop Road on Mount Desert Island, the Navy agreed to move the existing Otter Creek (across Frenchman Bay in Acadia NP) radio station to Schoodic Peninsula. In February 1935, the top secret U.S. Navy Radio and Direction Finding Station Winter Harbor was officially commissioned. 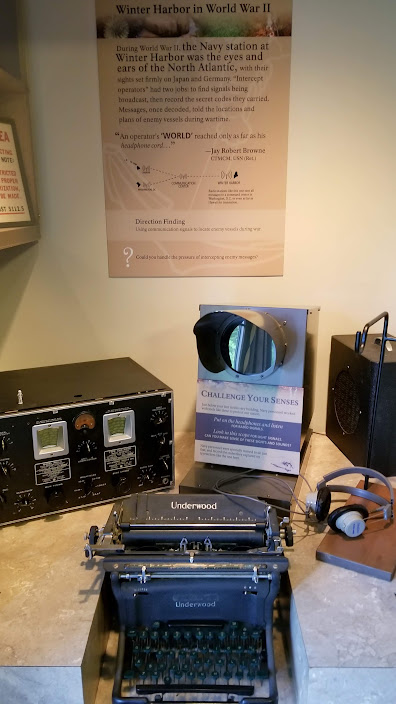 The exhibits and displays told of the fascinating history of the Navy’s presence here. The sailors would listen for and intercept communications signals, copy secret codes and help locate the direction of enemy ships. As technology advanced the need for a large radio base diminished. In 2002 the 36 buildings and the land was transferred over to the National Park Service.

Since then, Rockefeller Hall as well as the rest of the campus have undergone extensive renovations.  In 2013, the 21,000 square foot Rockefeller Hall was re-dedicated as a welcome center for the park’s education and research center. Besides the Welcome Center, the campus has conference facilities including a modern 124-seat auditorium, extensive lodging options and a dining hall for the individual researchers, scientists, educators and groups in one of the most inspirational natural settings in the country.

Leaving Rockefeller Hall, we had no choice but to take a right to continue on the one way Loop Road. Our next stop would be Schoodic Point which is located at the southern tip of the peninsula. 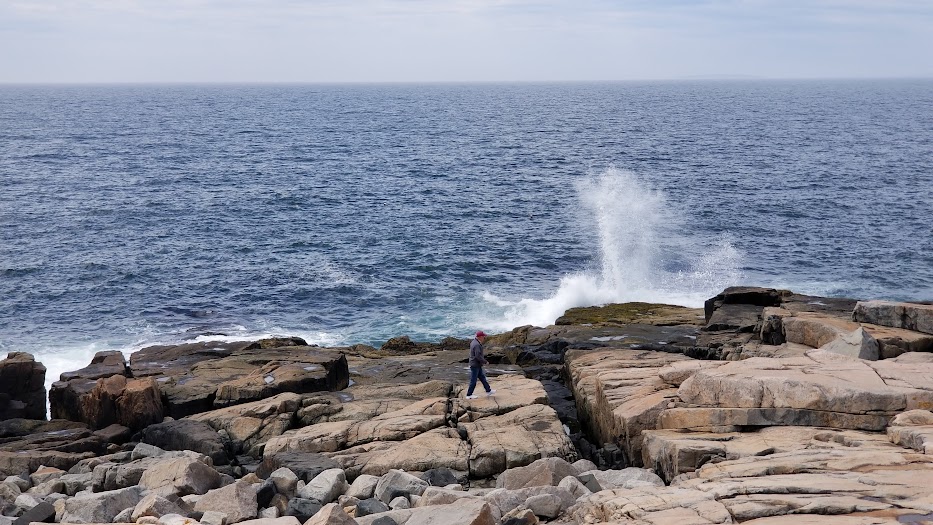 The pounding surf crashing against the pink granite outcroppings striped with large veins of basalt and edged with deep green conifers creates one of the most spectacular coastal views in Maine!

According to one of the signs, it is also one of the best places to view diabase dikes which are formed when the large veins of dark basalt forced their way through the older granite along the shoreline. Both the granite and basalt are igneous rocks that were formed from the cooling of magma during past volcanic activity. Blueberry Hill was the next pullout. For the hikers, this is where the several trailheads (Anvil Trail and Alder Trail) are located which lead to the Schoodic Head Summit (440 feet in elevation).

Speaking of trails, I will digress here. There is a 7.5 mile network of hiking trails that lead across the length of Schoodic Peninsula, from Winter Harbor in the north to Blueberry Hill at the southern tip. Two trails that we walked were the Sundew Trail located near Schoodic Institute which was an easy, .7 mile nature trail that traveled through dense forests, eventually leading to water views of Frenchman Bay. 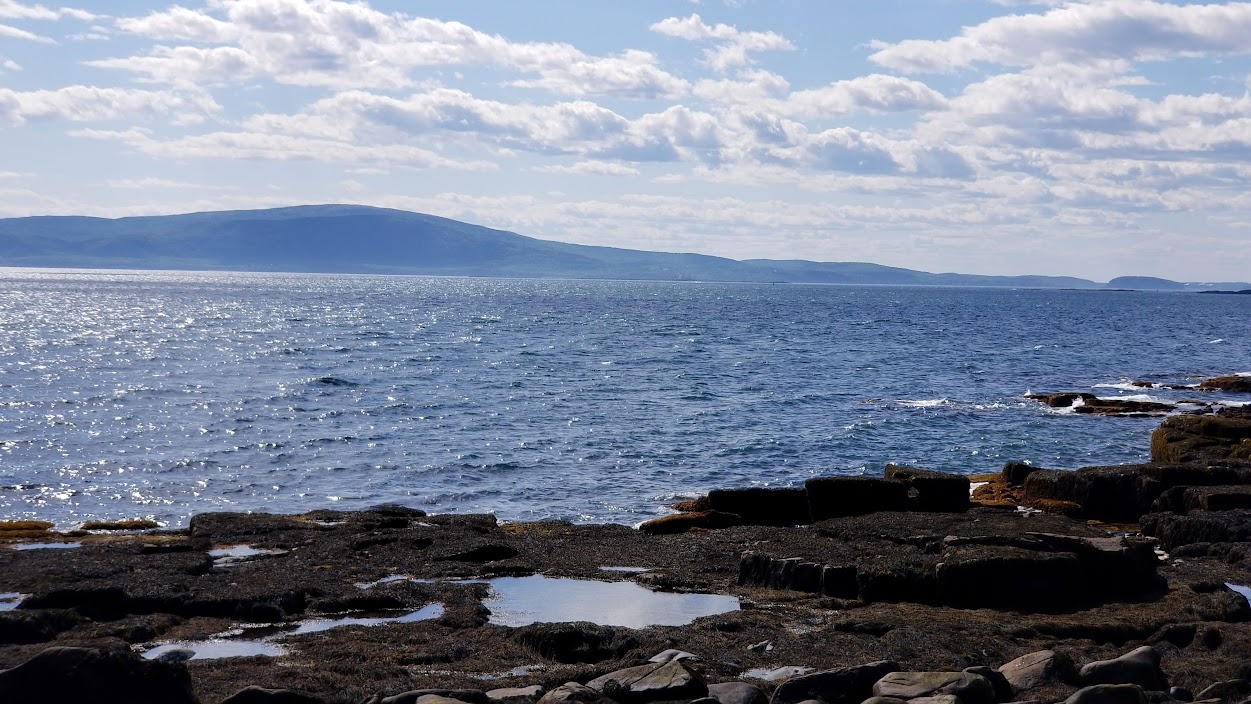 The Lower Harbor Trail, accessed within the campground, was an easy 1.5 mile trail that wanders through pine forests eventually leading to gorgeous views of Mt. Desert Narrows.

For those of you who are bikers, there is an 8.3 mile network of fine gravel 16 foot wide bicycle trails as well. Back to our drive.

Driving along the rocky coast, in some spots, there were so many rocks, it almost looked like truckloads of rocks must have been brought there and dumped but we learned that wasn’t the case. These rocks known as “cobbles”, a geological term describing a rounded stone between the size of an apple and a basketball, were created from ancient ice and powerful waves. Strong currents and storms pull cobbles into the surf then deposit them along the shore. 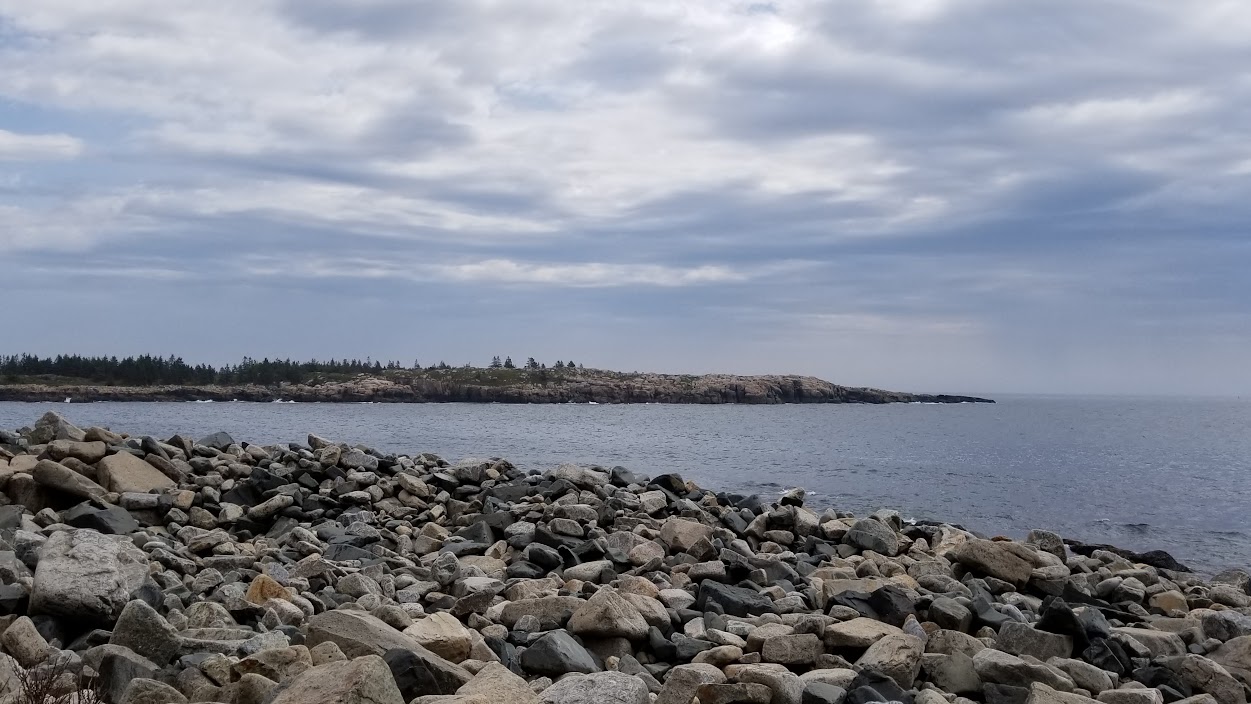 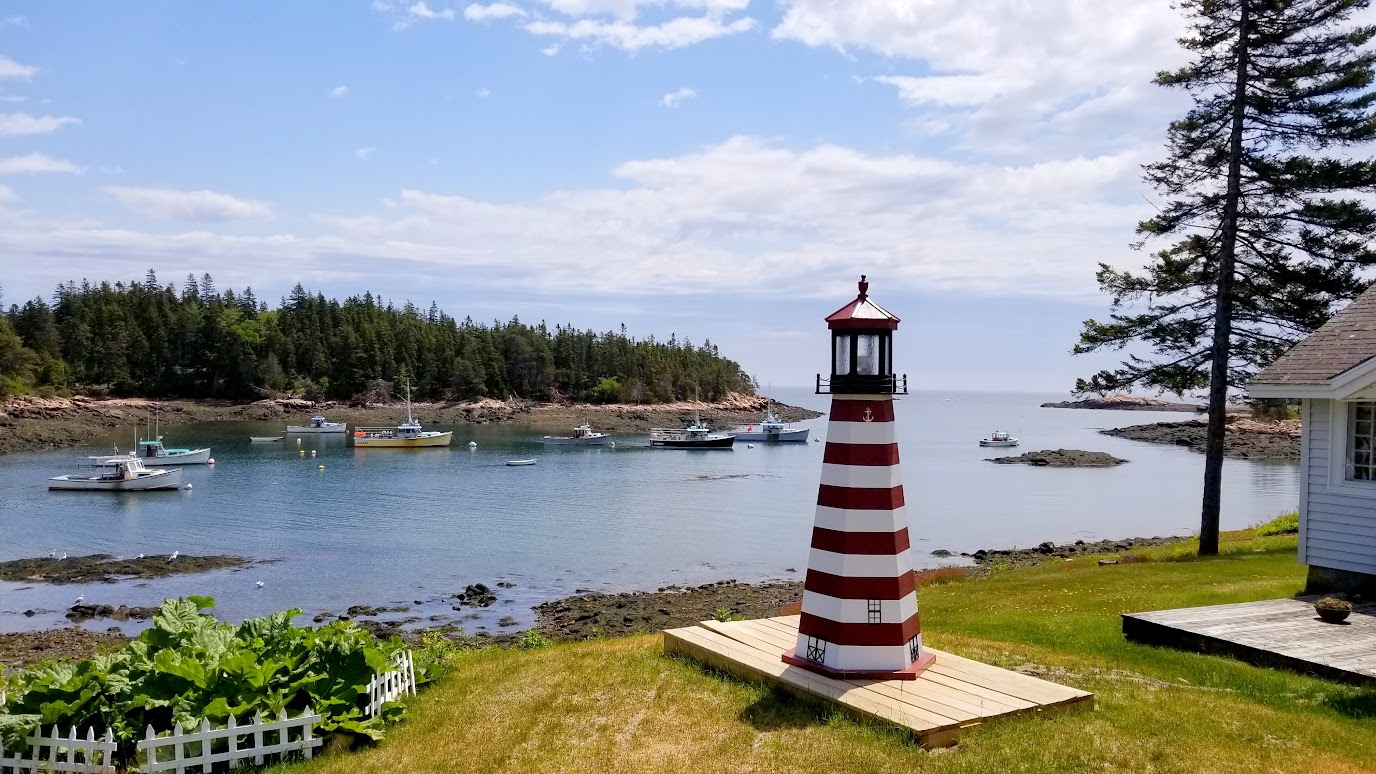 And back to the campground. More sightseeing to come…