Bucket lists – yes, we all have them encompassing many of the better known destinations and notable attractions. But sometimes the most interesting and fun places are not on anyone’s bucket list. These are the places where the local artisans are willing to share their passion for their craft, proudly showing off their skills and sharing their personal history with their visitors.

Often found in the smaller towns or out-of-the-way villages, these unexpected places can not only be the most interesting and fun but they are more enjoyable because they usually are the least crowded. That was the case with some of the places we visited with our friends on Schoodic Peninsula.

For example, if you drive too fast, you might not hear the mesmerizing melodies from the dozens of hand cast wind powered bells at the U. S. Bells Store in Prospect Harbor. If you don’t stop, you’ll miss all the unique items this place has to offer! Initially we thought it was just a small shop selling bronze bells but it was so very much more. 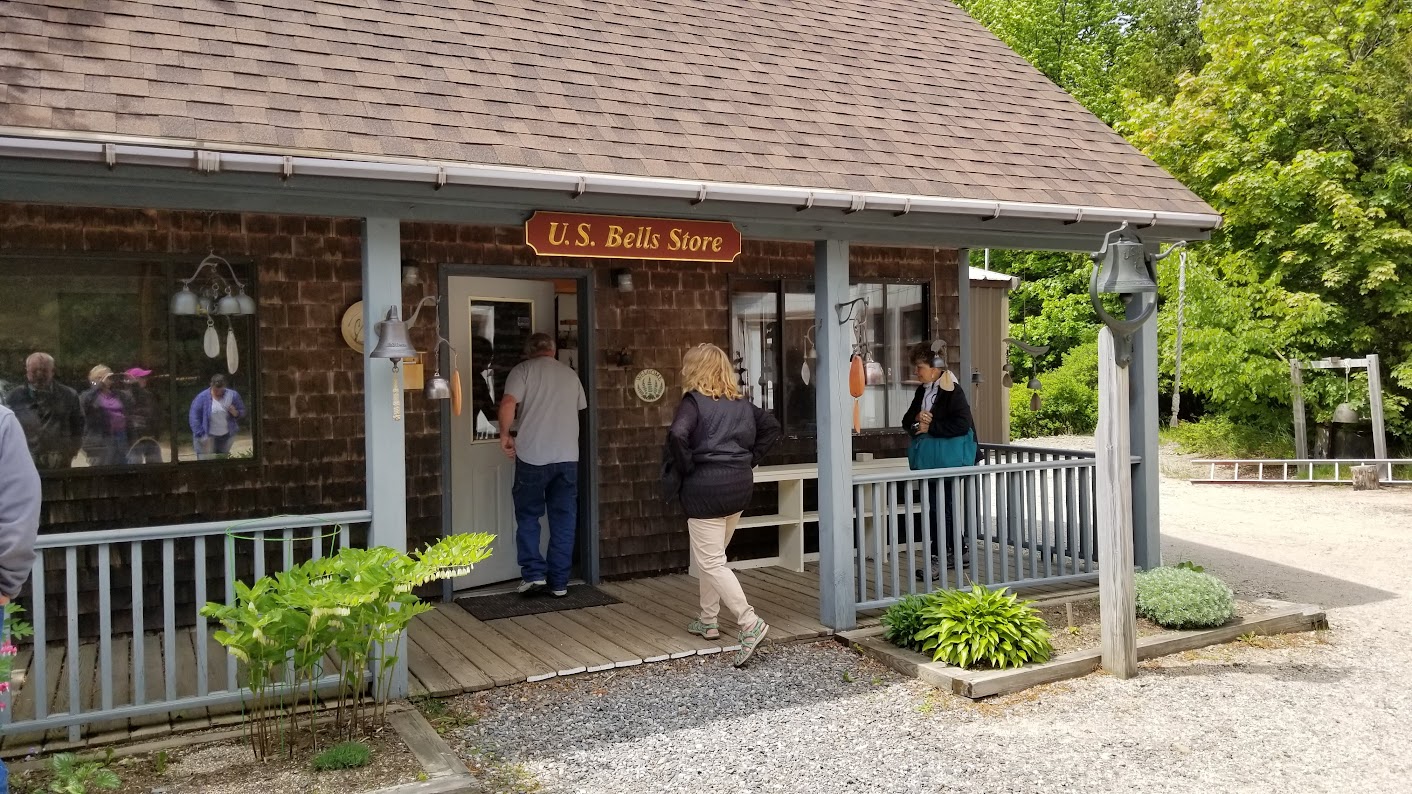 In the store are products representing Watering Cove Studios, a family collaboration of U.S. Bells, offering cast bronze wind & door bells designed and hand made by owner Richard Fisher; brightly patterned handmade batik quilts made by his wife, Cindy; unique furniture made by their son, Tim Fisher of Fisher Woodworking, who specializes in custom cabinetry & furniture; and wood-fired stoneware created by Tim’s wife, Liza of Liza Fisher Pottery.  Needless to say this is one talented family!

After checking out everything in the store, we wandered outside where there were a few larger bells on display.. 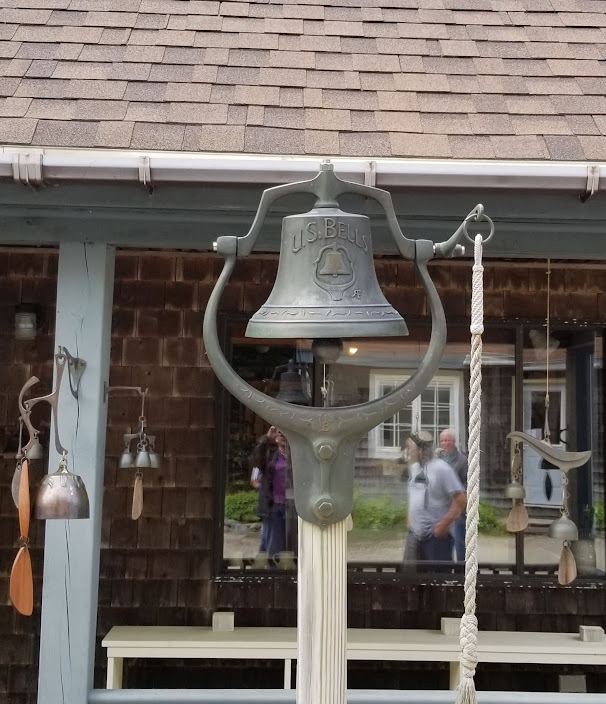 Across the driveway was another building that appeared to be some type of workshop. As we approached it, a woman who turned out to be, Liza Fisher, daughter-in-law of the owner and creator of stoneware, came outside and offered to explain the bell making process to us. Very interesting!

This video on their website (you may need to scroll down) describes the process in detail much better than I can. Be sure to check it out! Before the tour ended, she mentioned that they would be pouring bronze on Monday and to call in the morning to find out the specific time. Although we wanted to see that, unfortunately we weren’t able to! If you are ever in the area, this store and the associated studios are well worth a visit! 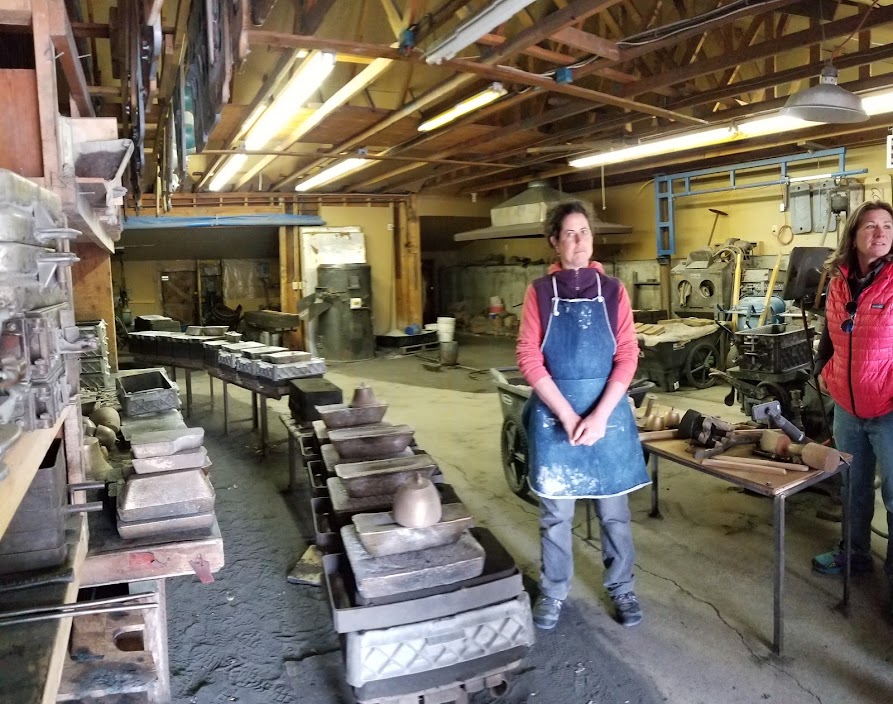 Always in search of fresh locally grown produce, our group moved on to another local business, Darthia Farm, a family-run, organic horse-powered farm, occupying 150 acres of recaptured pasture, hay land, gardens, and a selectively managed woodlot. The store, which is open from 8 am to 5 pm on Monday through Friday and from 8 am to 12 noon on Saturday, offers fresh organic vegetables, preserves, crafts, and locally made artisan products. Ground beef and whole chickens are also offered. Being early in the season, the fresh produce was somewhat limited but we did buy some fresh lettuce. 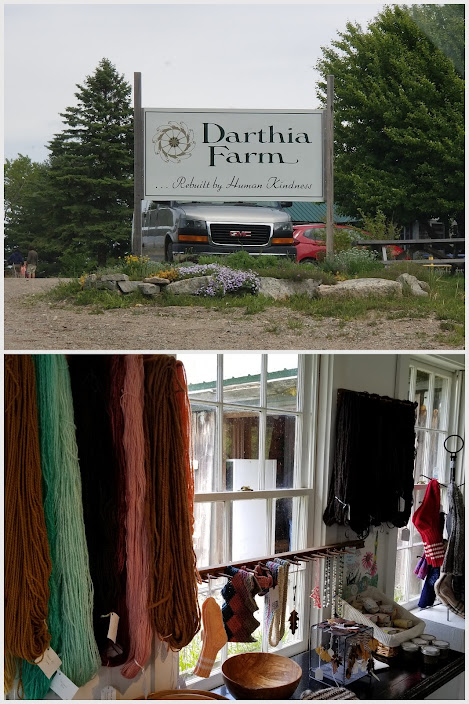 The “Hatties Wool Shed” room has a variety of fiber products, including hand-spun, hand-dyed yarn, hand-knitted mittens, hats, and sweaters, probably made from the wool of the sheep which were grazing outside in a fenced in field. 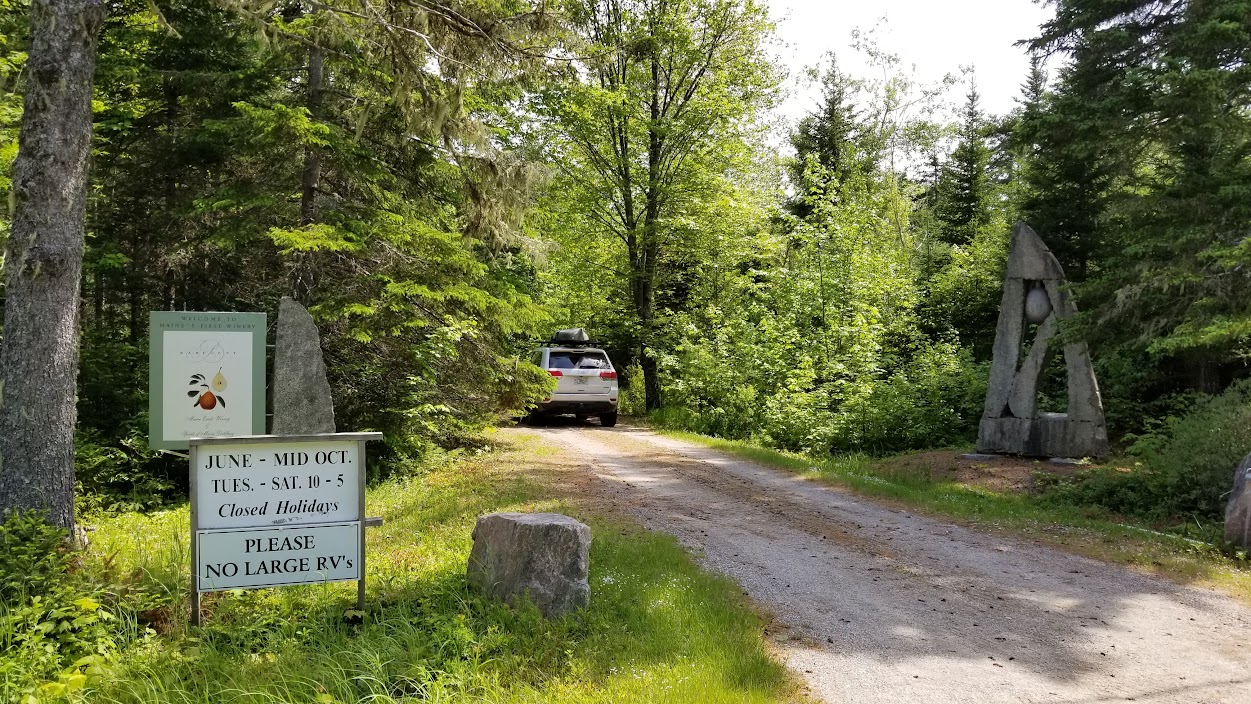 Located at 175 Chicken Mill Road at the end of a dirt road in Gouldsboro, Bartlett Maine Estate Winery & Distillery wasn’t the easiest place to find but eventually we did. To enter the tasting room, we had to follow a stone path that wound its way through an old growth forest surrounding the estate. According to an article I read, the walk is to get everyone in a relaxed state with a clear, open mind before tasting the wine.

Founded in 1983 and considered the first winery and distillery in the state, owners Bob and Kathe Bartlett, knew that making wine from grapes would not be possible in the cooler temps of Maine. Instead they began their winery using the fruit from low bush blueberries, eventually adding other fruits to the mix. When they first opened their winery, due to a state law they were able to make the wine but they couldn’t sell it directly to customers. But in 1983, Bob played a major role in changing the state law to enable farm wineries to legally sell their own wines directly. 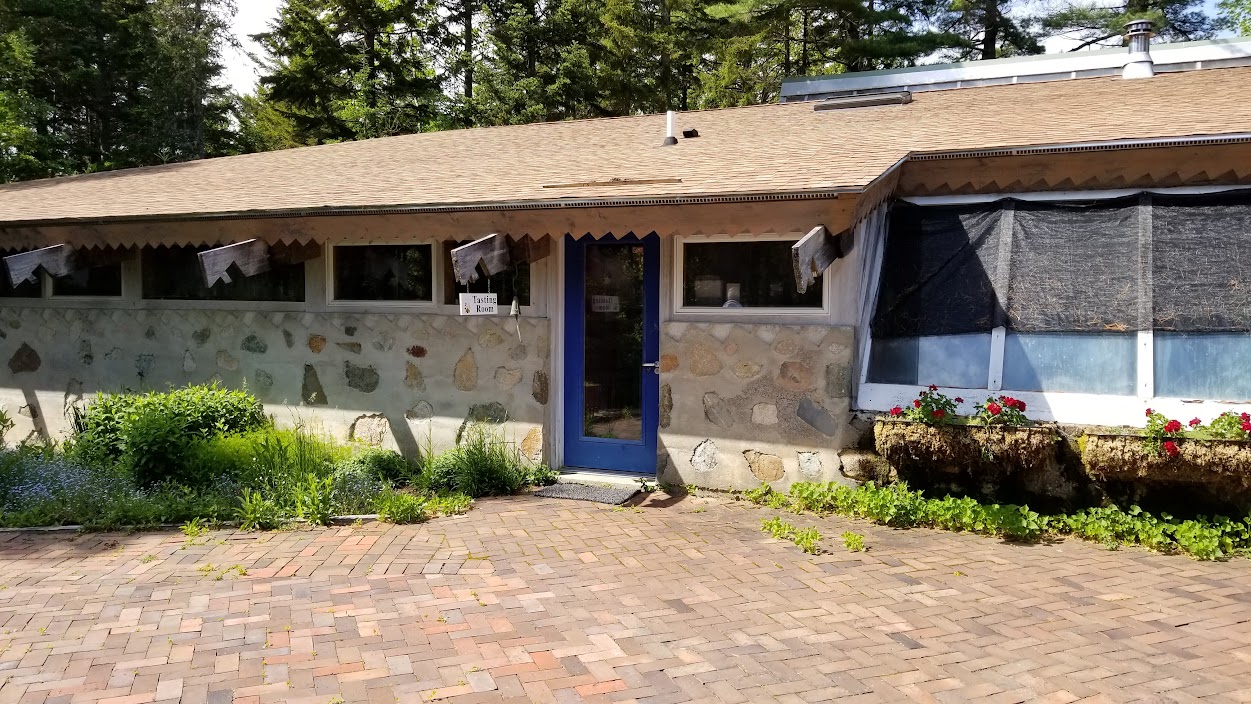 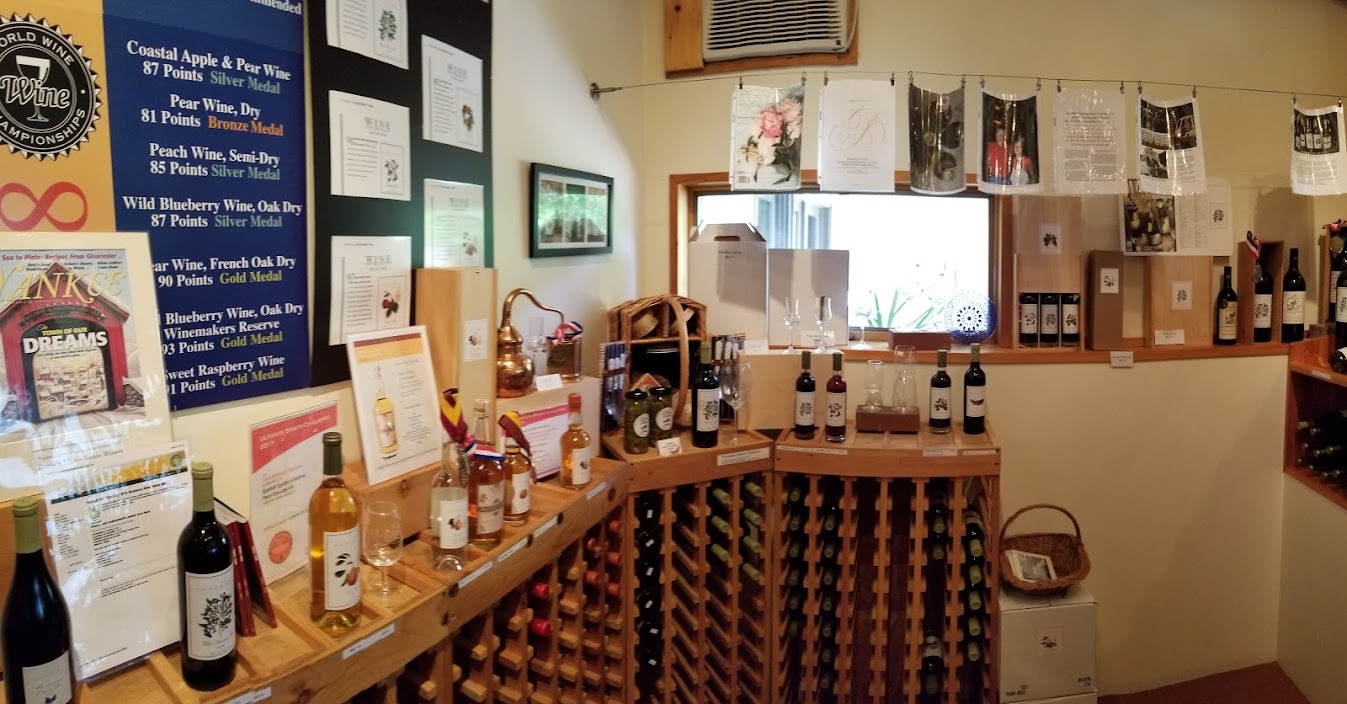 The winery is open June into October, everyday except holidays, Sunday and Monday from 10:00 a.m. to 5:00 p.m. 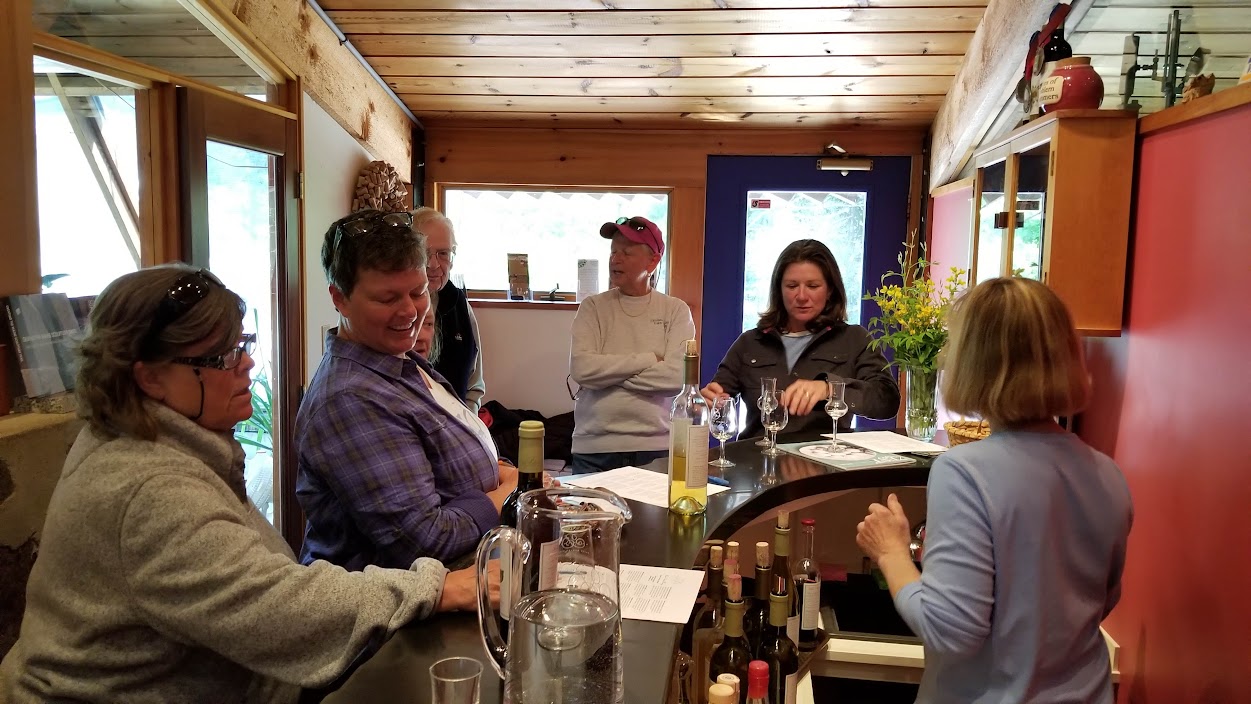 Although tours are not given, we learned a lot from Kathe, the owner, while hanging out at the tasting bar where we sampled 6 wines for $5.00 (plus tax). Each spirit tasting is an extra $1.00 (plus tax). Not being overly fond of the sweeter wines, our tasting choices included Wild Blueberry Dry, Wild Blueberry Oak Dry, Wild Blueberry & Zinfandel, Coastal White, Pear French Oak Dry and Trio, a blend of blueberry, blackberry and raspberry. That was followed by sampling all four of the spirits: Apple Brandy, Pear Brandy Double Wood, Pear Eau de Vie and their award winning Rusticator Rum which is distilled in a one of a kind German copper named “Lola”. All were very good. Their wines range in price from $16 to $45; their spirits from $34.99 to $44.99. Interesting and a lot of fun!

For a photo op, everyone wanted to see “Big Jim the Fisherman”, a towering 30 year old, 40-50 foot tall metal cutout, standing near Prospect Harbor at what once was the Stinson Canning Company, sadly the last American sardine canning company that went out of business in 2010. As reported in Roadside America, this fisherman in yellow oil clothes, once held a giant can of Beach Cliff sardines. Since he is now standing next to Maine Fair Trade Lobster, a lobster processing plant, it is only fitting that the sardine can has been replaced by a lobster pot. 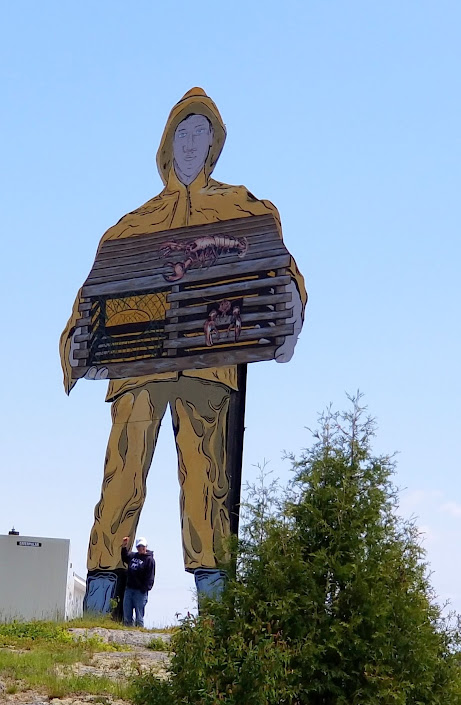 Sightseeing sure makes you hungry! On most days, as part of our sightseeing expeditions, the group would try different places for lunch. The Pickled Wrinkle, the Wharf Gallery & Grill and Chase’s Restaurant were a few of the places we tried but those will be covered in our Sampling Schoodic Savories post.

And of course, how could we be at such a beautiful campground with a bunch of lobster fanatics without having an outdoor lobster feed? With that lobster boil in mind, we paid a visit to the nearby LobStore. 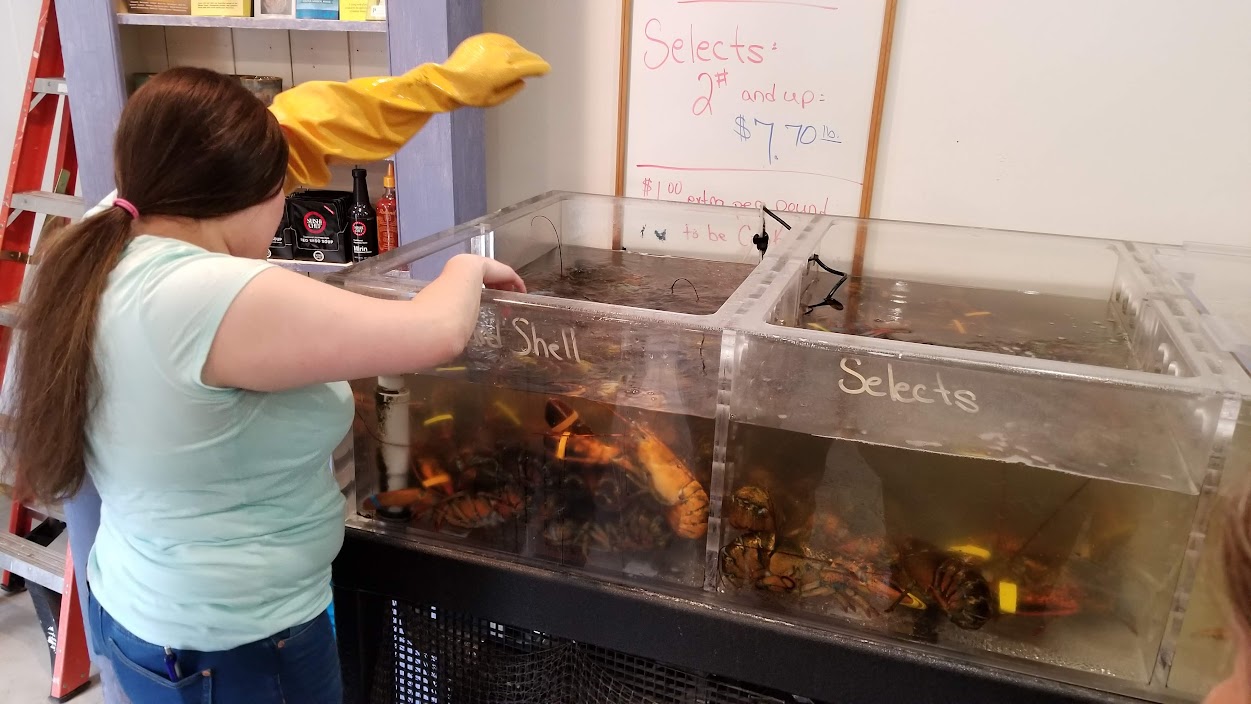 Besides lobster, they sell a variety of really fresh seafood – scallops, tuna, oysters, mussels, steamers and surprisingly, king crab. Yes, that’s right, king crab! The only king crab we’ve ever seen are just the legs and those have always been frozen. But they had two live king crabs in a tank, selling for $34/lb! One of the workers was chuckling while telling us that one of them was constantly managing to climb out of the tank! 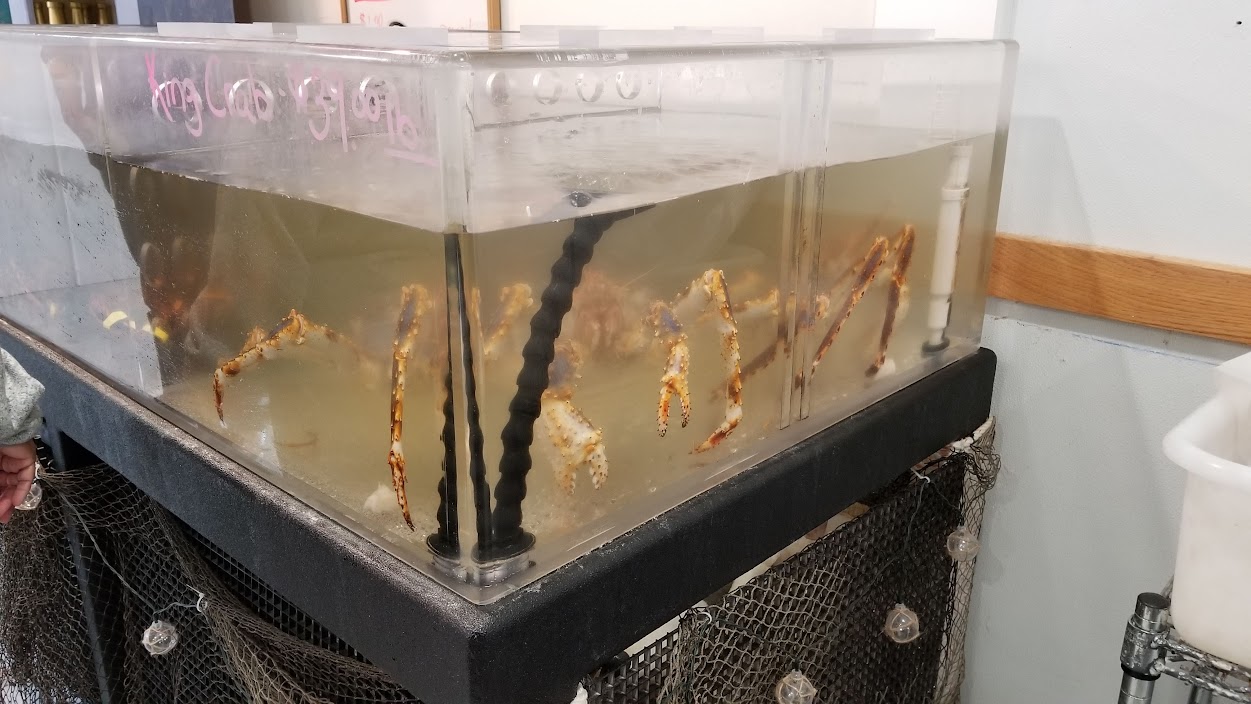 When Betsy and Nancy went back the next day to buy the lobsters for our cook out, one of the crabs had been sold for over $200! Hope whoever bought it had a big enough pot to cook it in!

Another fresh seafood distributor managed by local fisherman is also located in Winter harbor. “Winter Harbor Lobster Coop – from our boats to your door” has a wide selection of local product at competitive prices.

Nothing beats fresh Maine lobsters steamed with seaweed gathered right from the ocean and eaten on a picnic table. 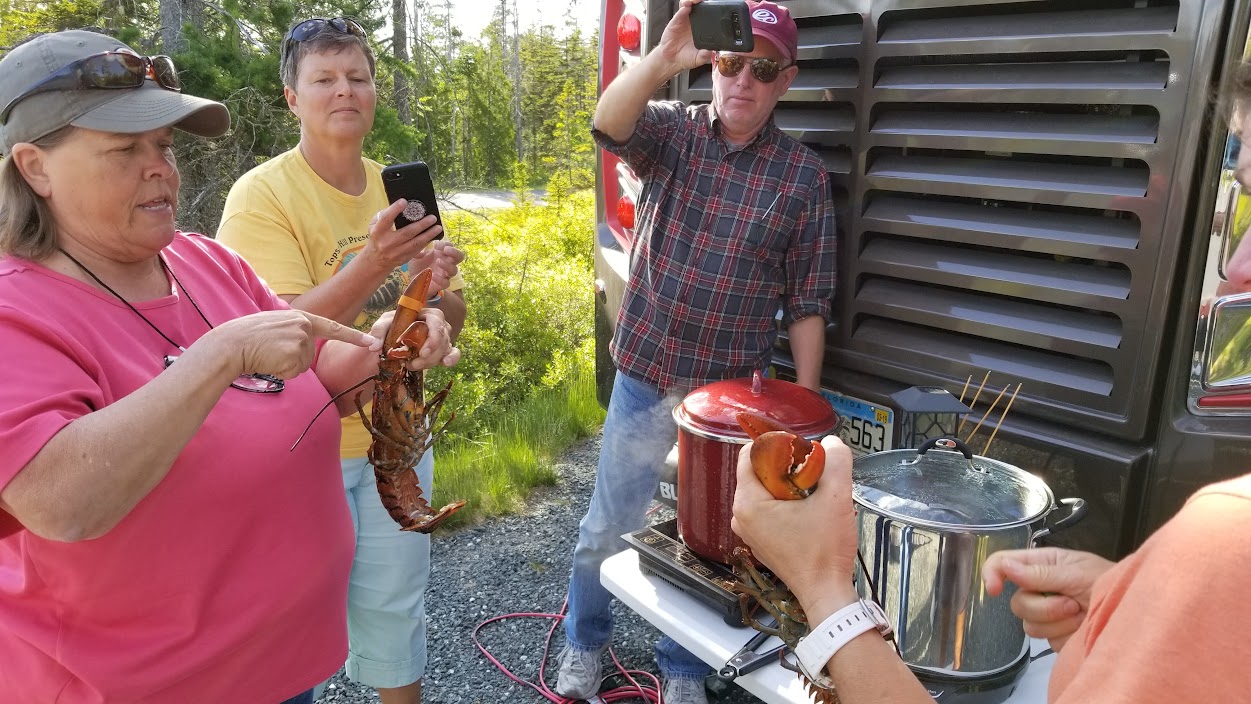 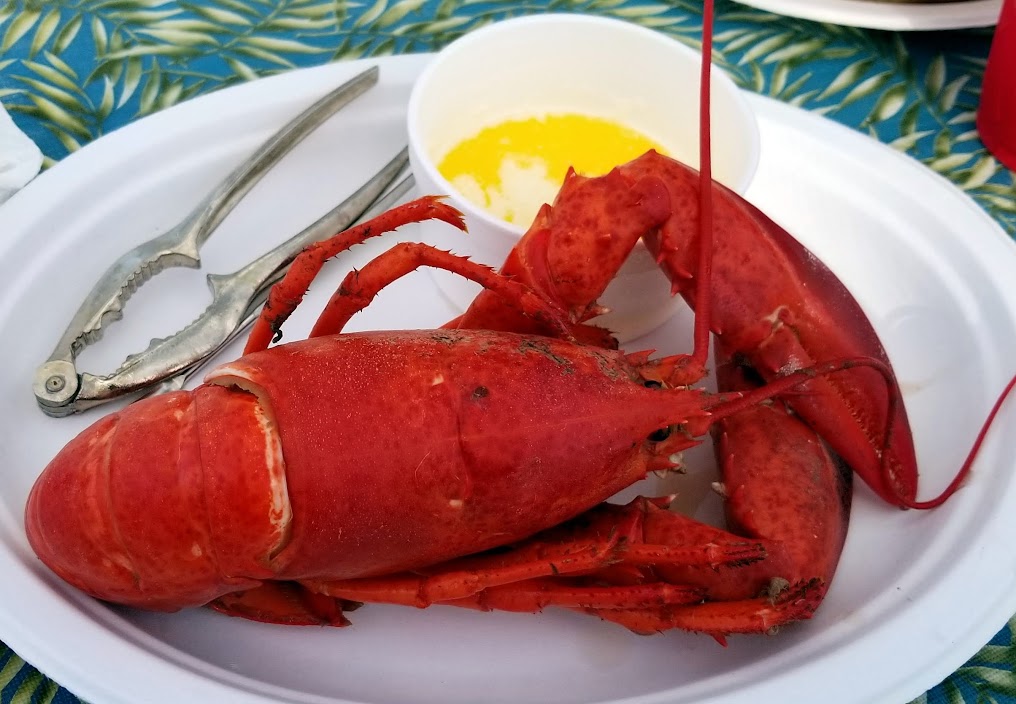 One of our favorite local TV shows on a Boston area station, WCVB, has a program called Chronicle, which has a series titled “Main Streets and Back Roads“. If you are planning a trip to any of the New England states, be sure to search for “Main Streets and Back Roads” on YouTube. In each segment, you’ll find a wealth of information on places to go, things to see and do, best restaurants, etc.

It was pretty coincidental that shortly after our return to RI, they just happened to have a program chronicling Schoodic Peninsula which showed most of the places we went to (and a few we didn’t) on the peninsula. Although it was a half hour program on TV, the video has been split into four separate segments each about 4 to 5 minutes in length:

Local Flavors – A Visit to the Pickled Wrinkle in Birch Harbor, the Wharf Gallery & Grill in Corea and Wild Blueberry Land in Columbia Falls (technically not on Schoodic and a place we didn’t go to)

The Quiet Side of Acadia – a demo of how bells are made at U.S. Bells, the Littlefield Gallery and Schoodic Arts For All where a number of art programs are offered. Highlighted in this segment are local residents playing steel drums

Even though our stay on Schoodic Peninsula was coming to a close, we weren’t quite ready to say goodbye to Mt. Desert Island and Acadia. Southwest Harbor would be our next destination. More about that in our next post.