I’ll be the first to admit it, early risers we are not. Retirement can do that to you. But the thoughts of soaking up a spectacular sunrise at the iconic Zabriskie Point vista was enough of an enticement for us to haul our lazy butts out of our very warm, snuggly bed in the very early hours of a January morning. Sunrise was at 6:59 a.m. (Pacific local time) on this particular morning, January 3rd. As we drove the six miles from Furnace Creek along CA-190, the sky was awash with glorious shades of red, yellow, orange and purple, a sharp contrast to the dark silhouette of the mountains. Yep, definitely worth getting up for! 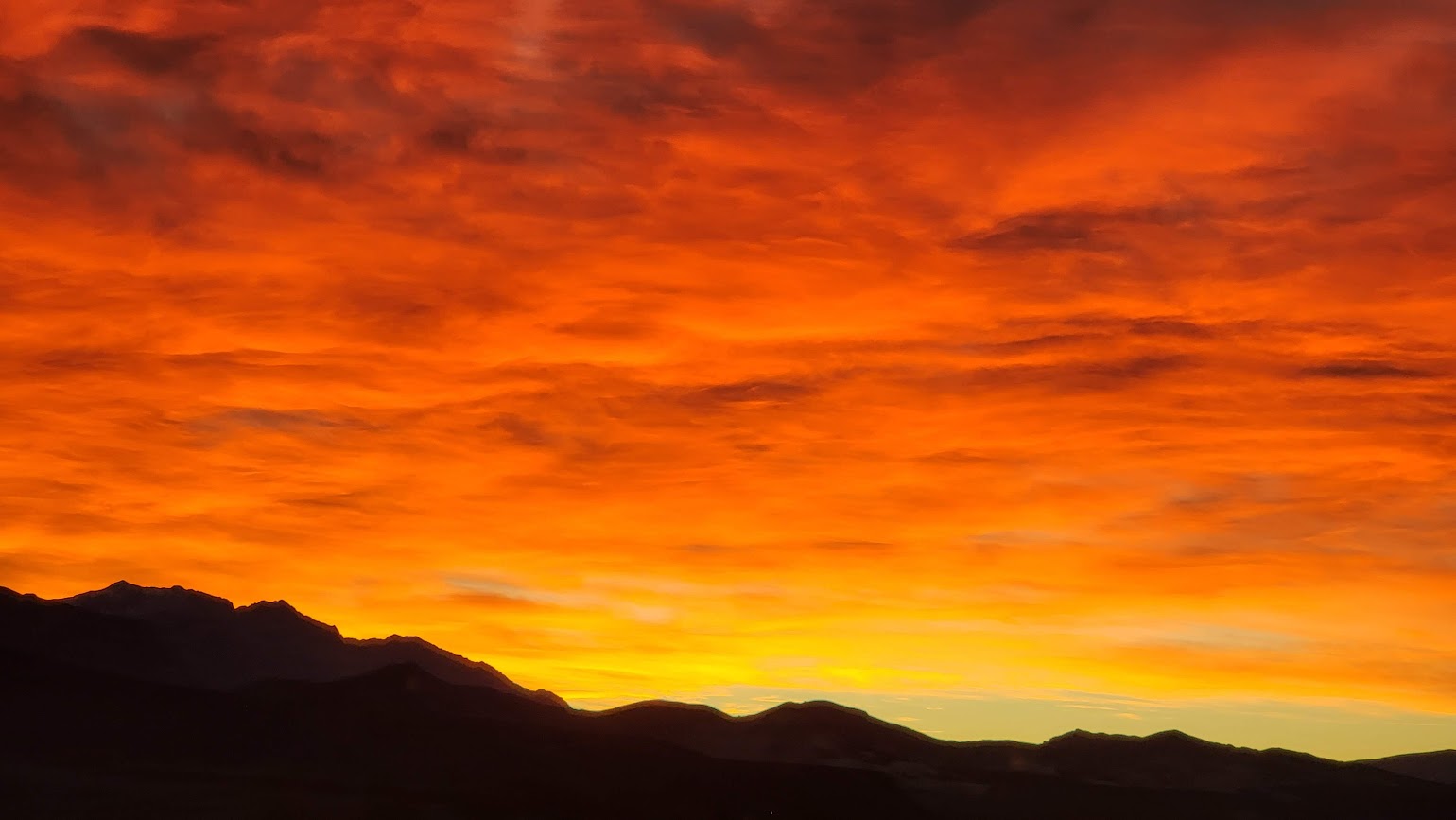 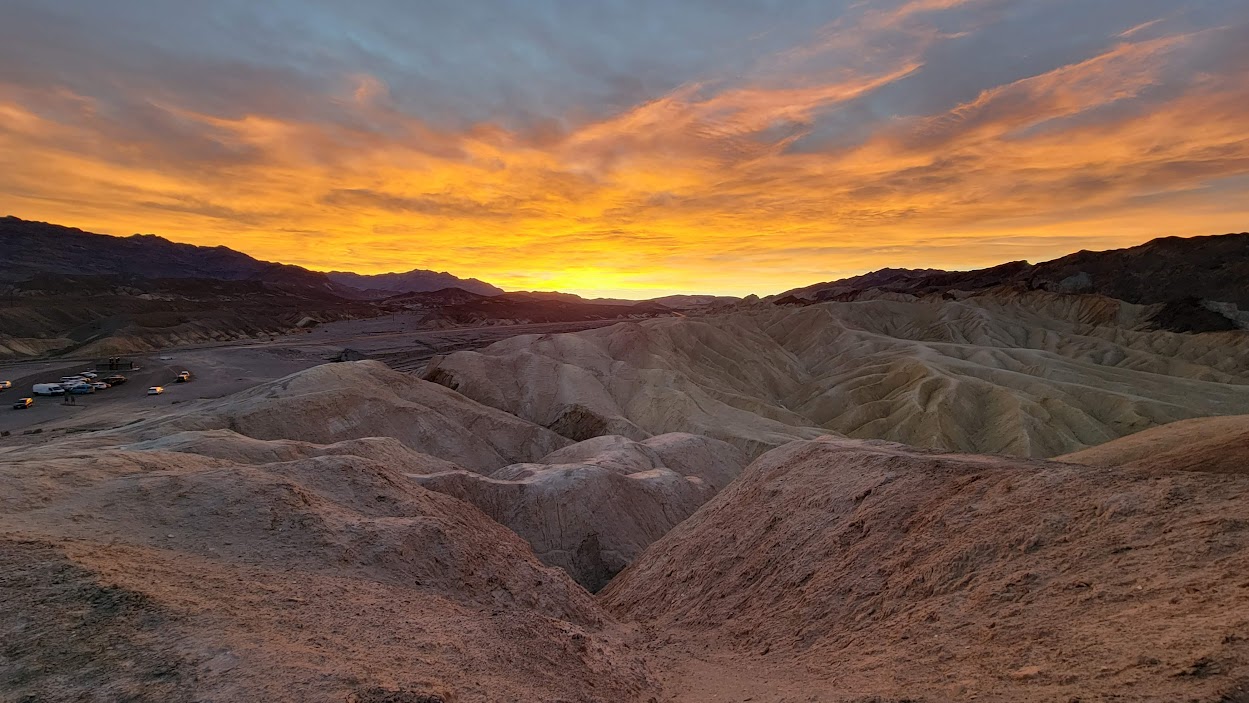 It was an easy, 1/4 mile walk on a paved trail from the parking lot (note there are rest rooms in the parking lot) to the top of the point, just what we needed to get our circulation moving and wake us up. Between the spectacular scenery and the uphill somewhat steep hike, who needs a morning cup of java! 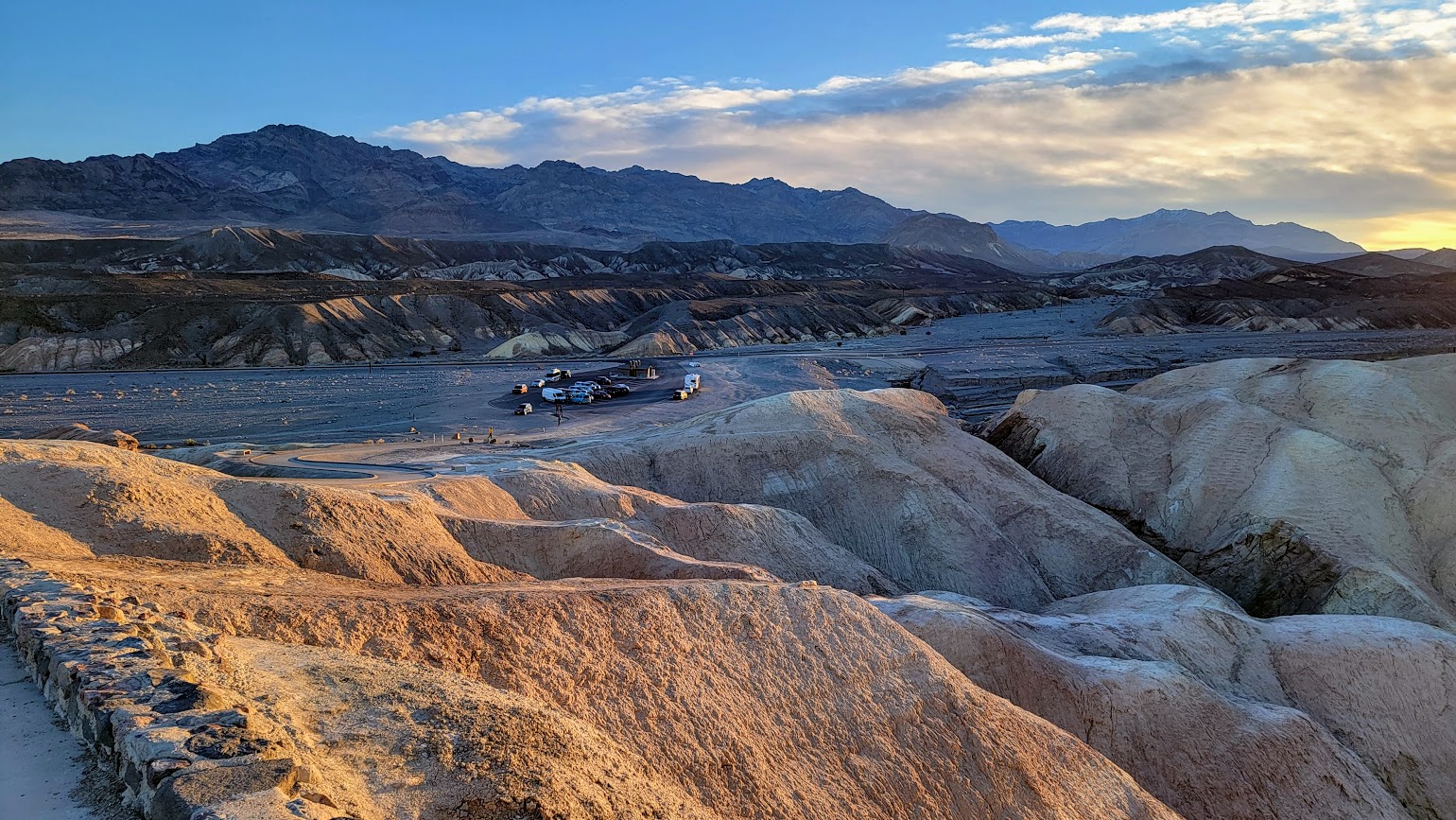 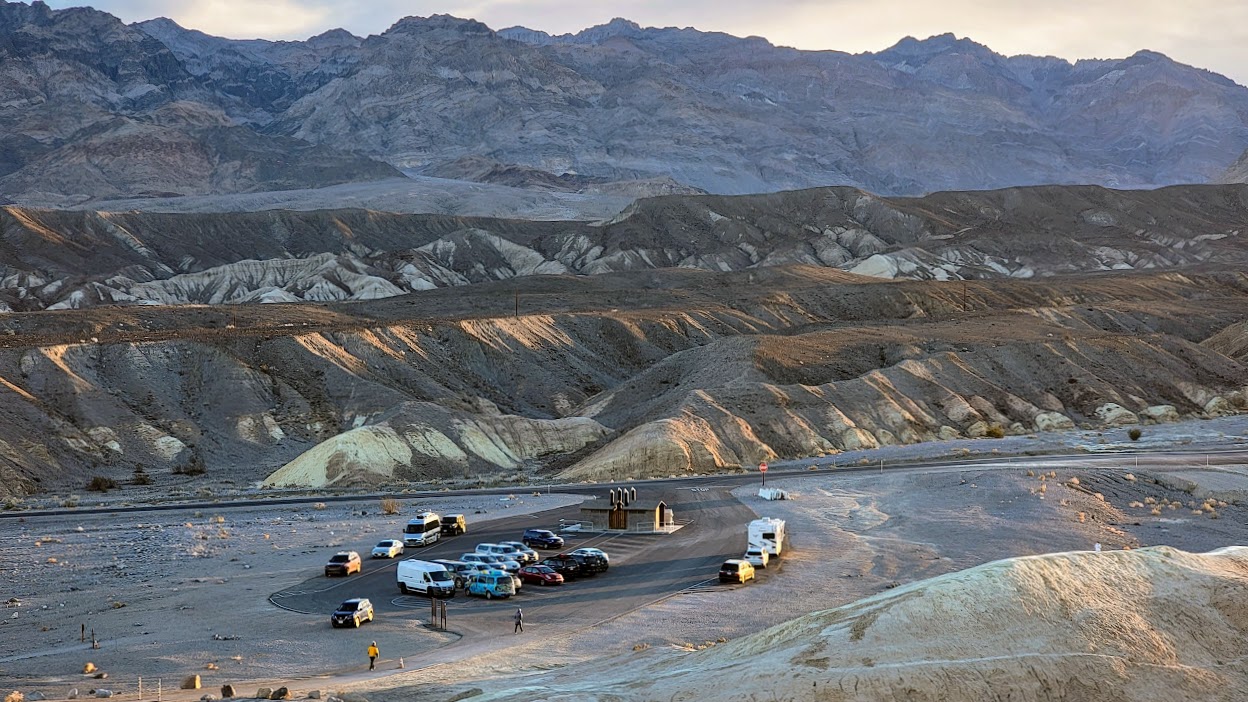 Speaking of hot coffee, ask us if it was cold outside? Don’t remember what the temp was that early in the morning….maybe 40-ish! Cold – yes, snow alerts – no! Something hot sure would have tasted good and would have helped to warm our hands! 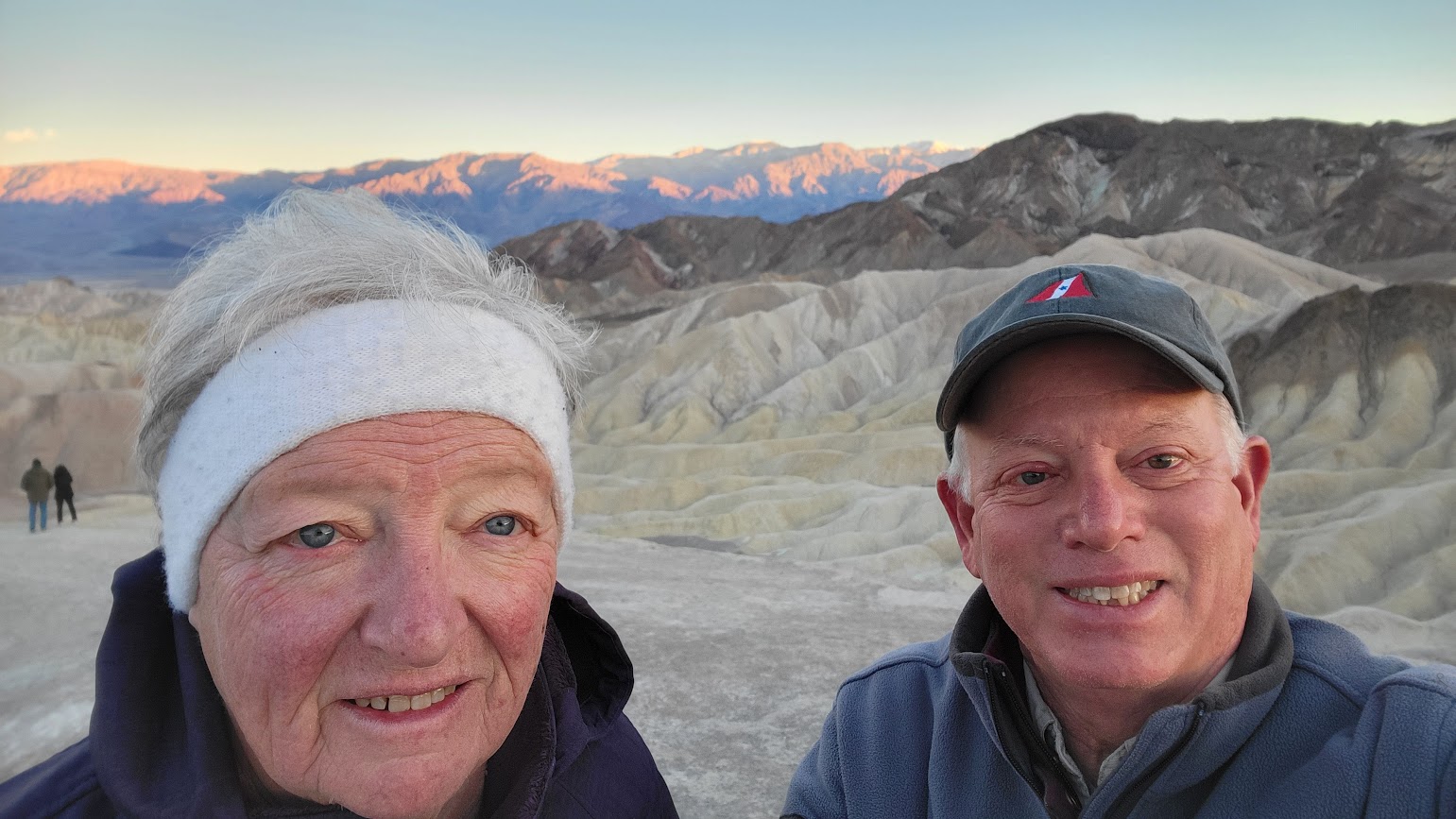 Named in honor of Christian Zabriskie, a prominent figure in the heyday of the Pacific Coast Borax Company, the overlook stands at the upper east end of the badlands terrain and is full of impressive canyons and gulches.  Views of the salt flats covering the floor of Death Valley were visible in the far distance against a backdrop of the towering Panamint Mountains.

According to Wikipedia, besides it’s awesome in person spectacular views, Zabriskie Point holds a prominent place in popular culture – in films (i.e. Spartacus in 1960, surface of Mars in the 1964 film Robinson Crusoe on Mars and the first season of The Mandalorian), novels (Fall of Night, Dust and Decay, and Fire and Ash by Jonathan Maberry), album covers (U2’s album The Joshua Tree) to name a few.

Although the mountains blocked the sight of the sun rising on the horizon, the views did not disappoint as the sun drenched the surrounding terrain with brilliant hues of gold, red and orange, replacing the dark pre-dawn shadows that had been cast earlier on the sandstone. With each passing minute, the breathtaking landscape changed dramatically. 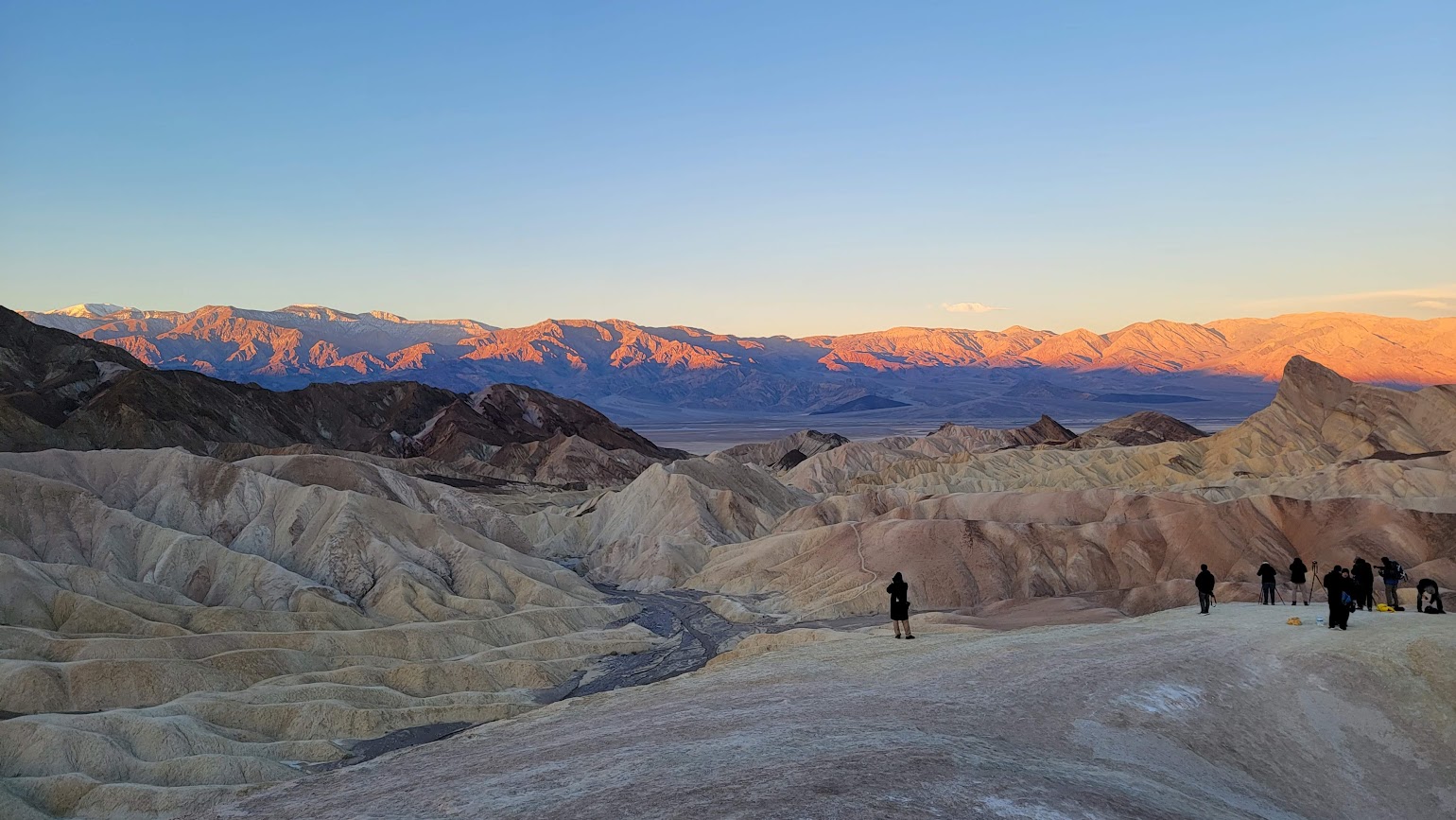 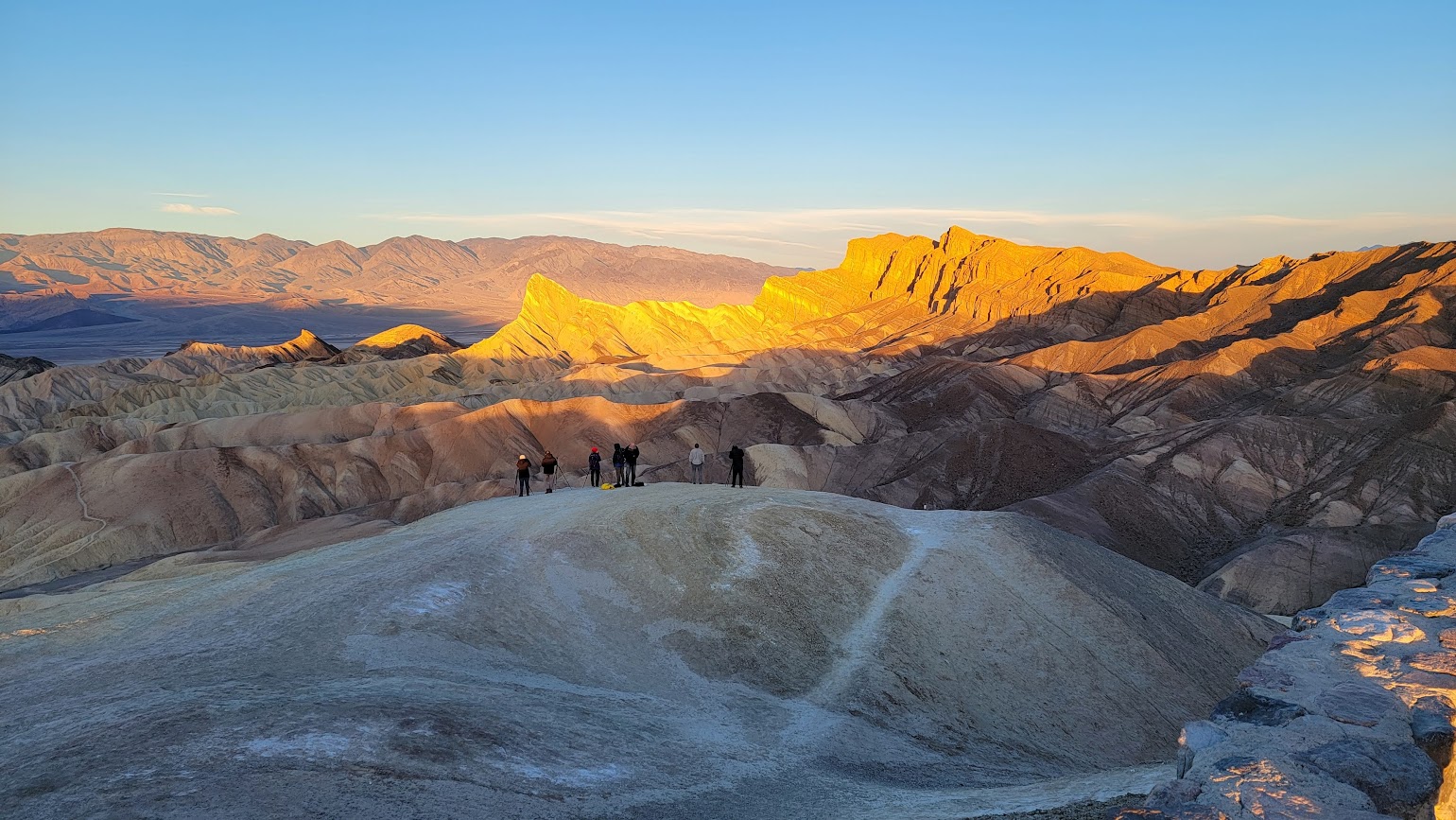 This brief video taken at 7:21 a.m., 22 minutes after sunrise, shows the sharp contrast between those hills bathed in sunlight and those still shrouded in darkness.

What a great way to start the morning! But wait, we just got started – there’s so much more to explore!