Located approximately 19 miles from the campground, on Badwater Basin Road, is the very popular Badwater Basin, a surreal landscape that is the lowest spot in North America at 282 ft. below sea level. 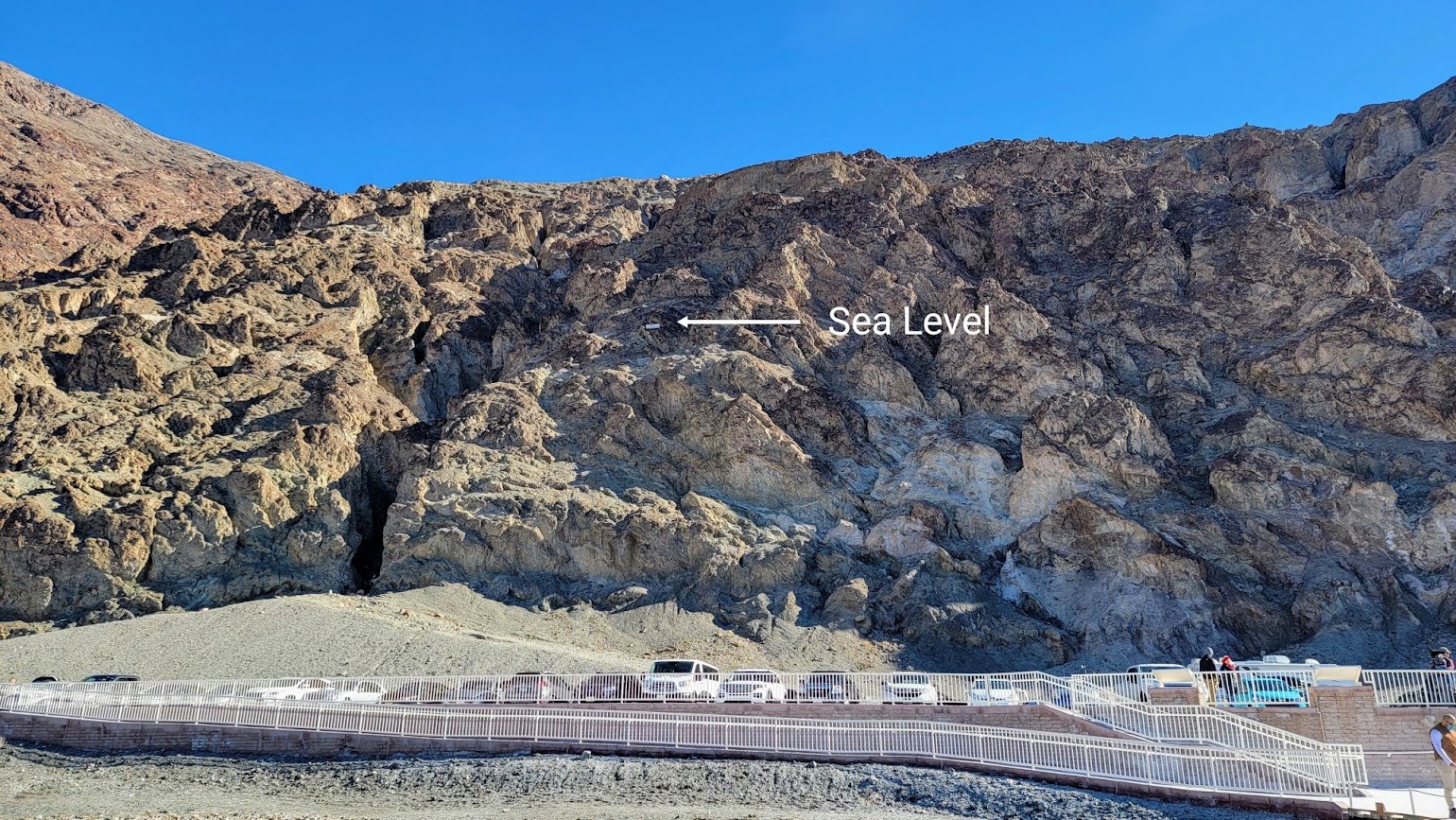 In fact, visiting here was so popular, going there on New Year’s Day (why do we keep going places on holidays I wonder) was a huge mistake – very crowded. Although there is a small designated parking area, many people park along Badwater Basin Road. We were able to find a space but because of the crowds we cut our visit short, returning a few days later when it was much less crowded with plenty of available parking.

Covering nearly 200 square miles, Badwater Basin is among the largest protected salt flats in the world. They are composed mostly of sodium chloride (table salt), along with calcite, gypsum, and borax. We learned that three basic things are needed for salt flats to form, all of which existed in Death Valley:

Once the site of Lake Manly, which dried up about 10,000 years ago, concentrated salt deposits were left behind. Those formed fascinating hexagonal honeycomb shapes from the repeated freeze–thaw and evaporation cycles which gradually pushed through the thin salt crust, thus forming the salt flats of Badwater Basin. That cycle continues even today. Lake Manly was named after William Lewis Manly, who with John Rogers walked out of Death Valley in 1850 to get help for the Bennett-Arcane party of Lost 49’ers. The story goes that Badwater Basin got its name because of a mule owned by a surveyor mapping the area that refused to drink from the spring-fed pool. Guess you could say he was one smart ass!

You would think that this type of saline environment would not support any form of live organisms but that is not true – the pool is home to a variety of aquatic insects, an endemic Badwater snail naturally found only at this location and along its rim are salt tolerant plants, including pickleweed.

To the west (about 16 miles in a straight line) is Telescope Peak (11,049 feet) in the Panamint Range which is over 11,331 feet (2.14 miles) above Badwater Basin. The peak is notable for having one of the greatest vertical rises above local terrain of any mountain in the contiguous United States. 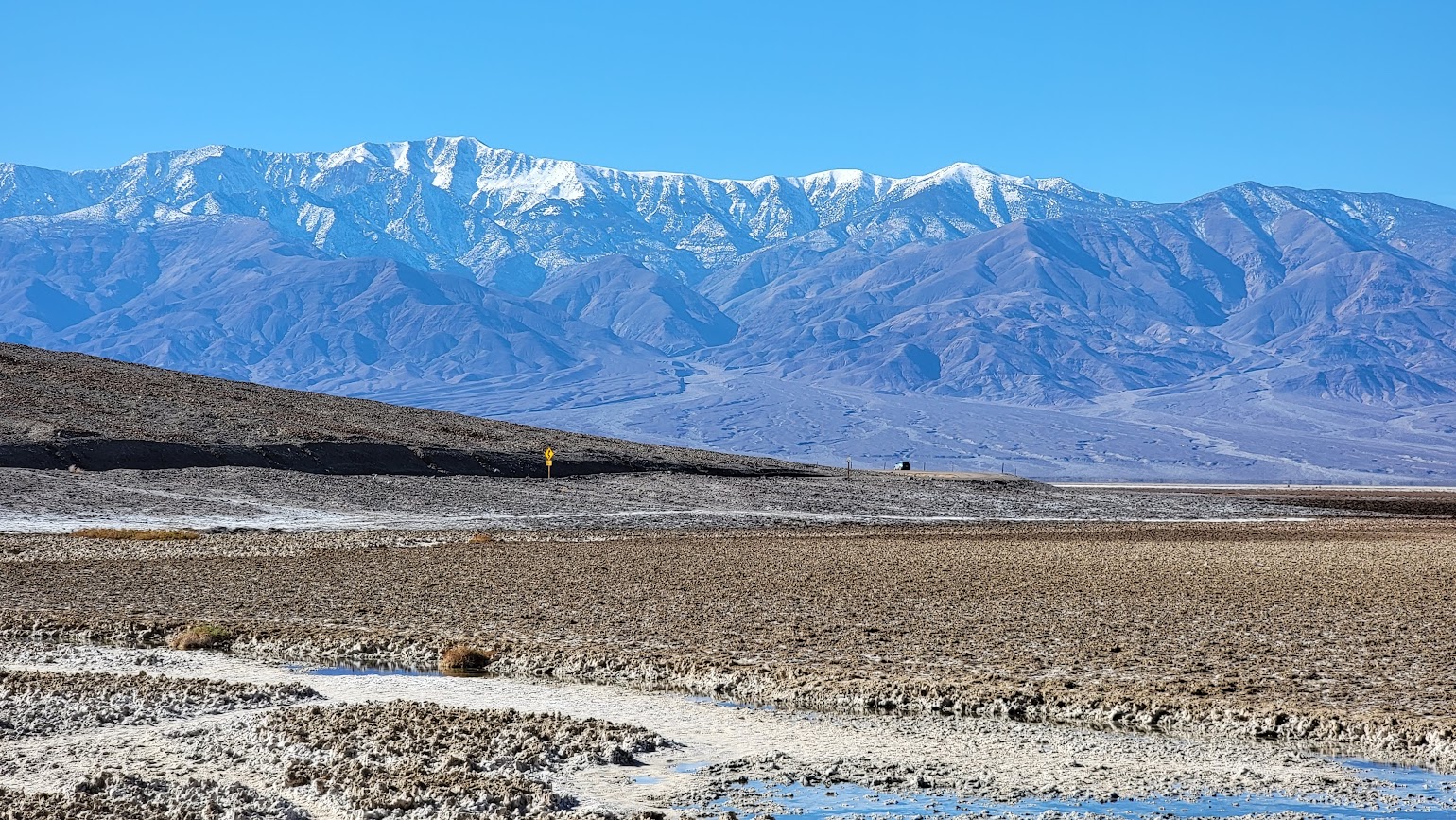 We strolled along the wide, flat 1 mile long boardwalk to the edge of the salt flat and continued beyond. How cool! What wasn’t so cool though was tracking all the salt onto the floor mats of the Jeep! It took weeks for us to get rid of the stuff out of the car! 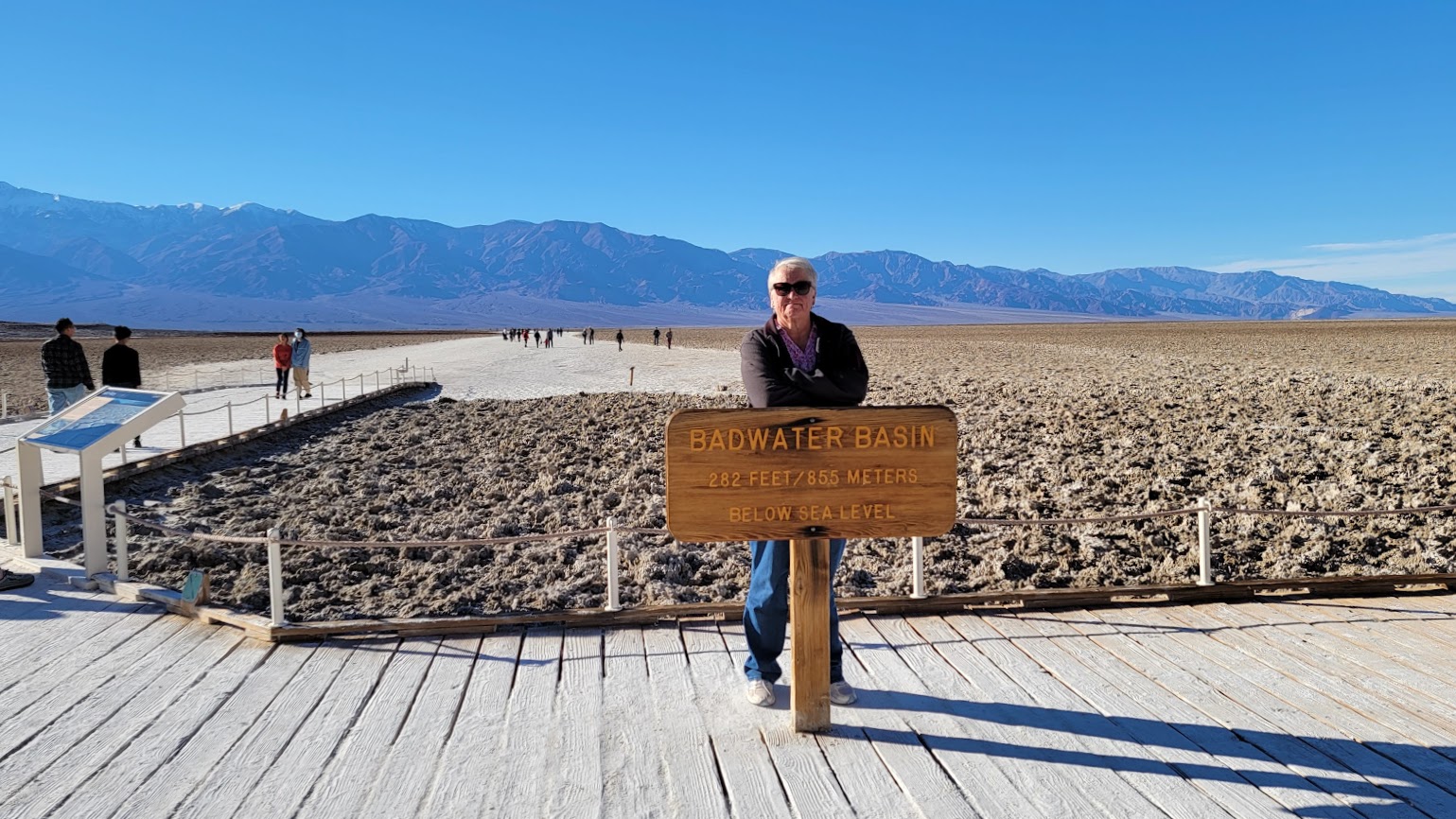 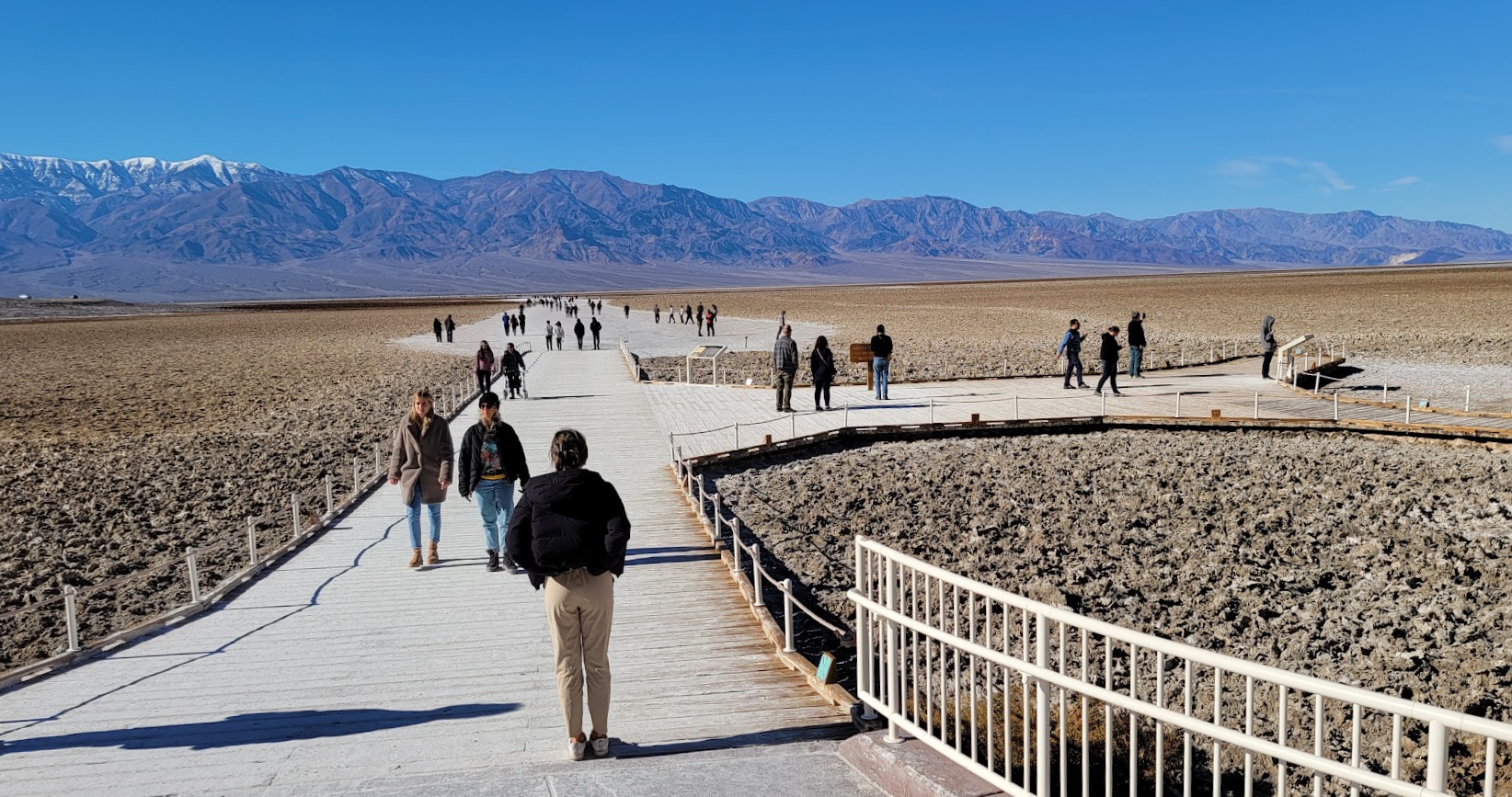 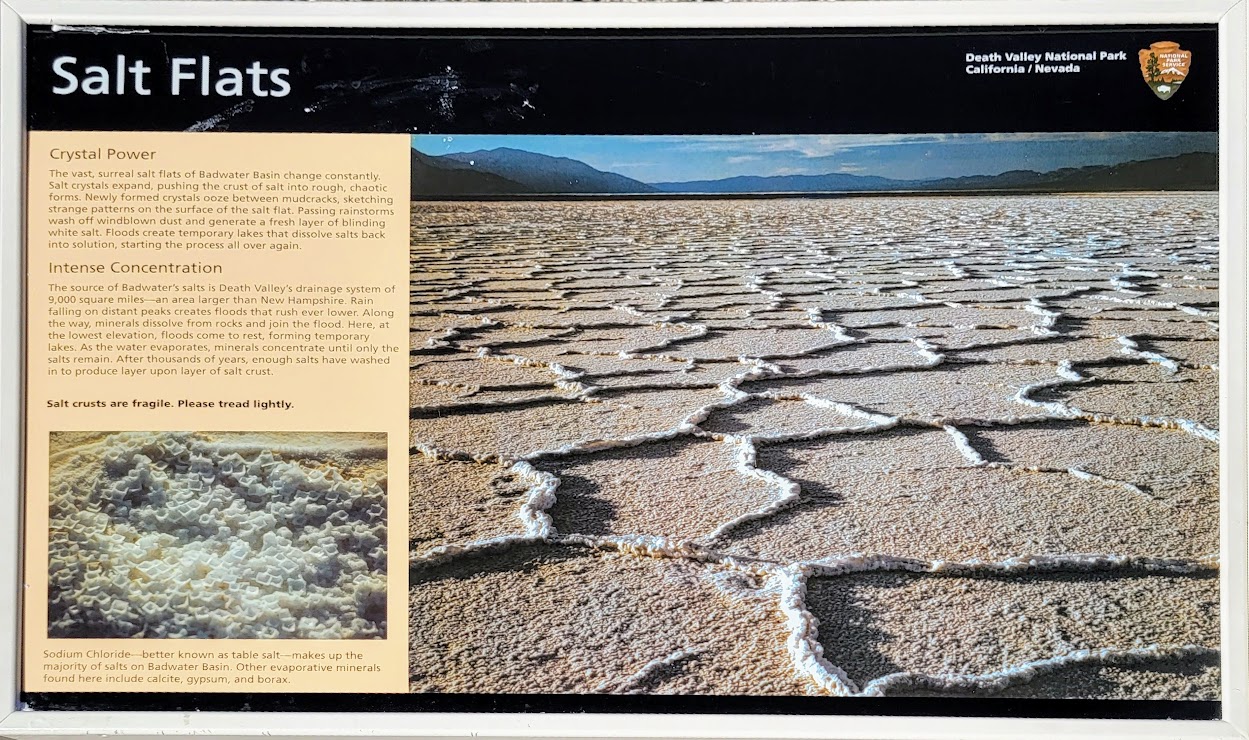 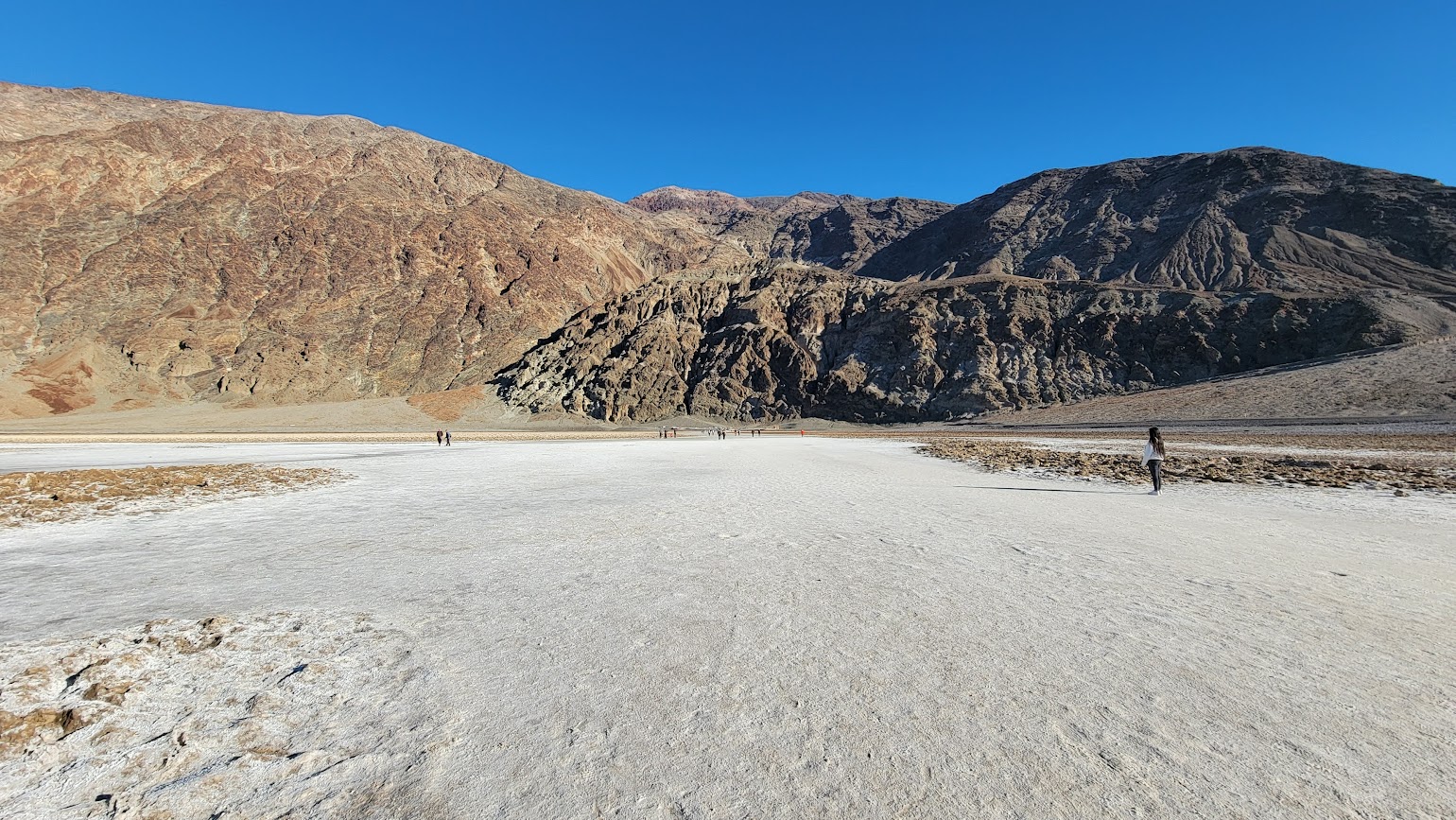 Badwater Basin was definitely cool but an even cooler and more surreal scene was located about 13 miles north and accessible via a 1/2 mile dirt road off of Badwater Basin Road. Although you can drive the dirt road in a car, an SUV or off-road vehicle is preferable, though we saw lots of cars travelling the road. At the end of the road is a small parking lot with enough room for about a dozen vehicles. 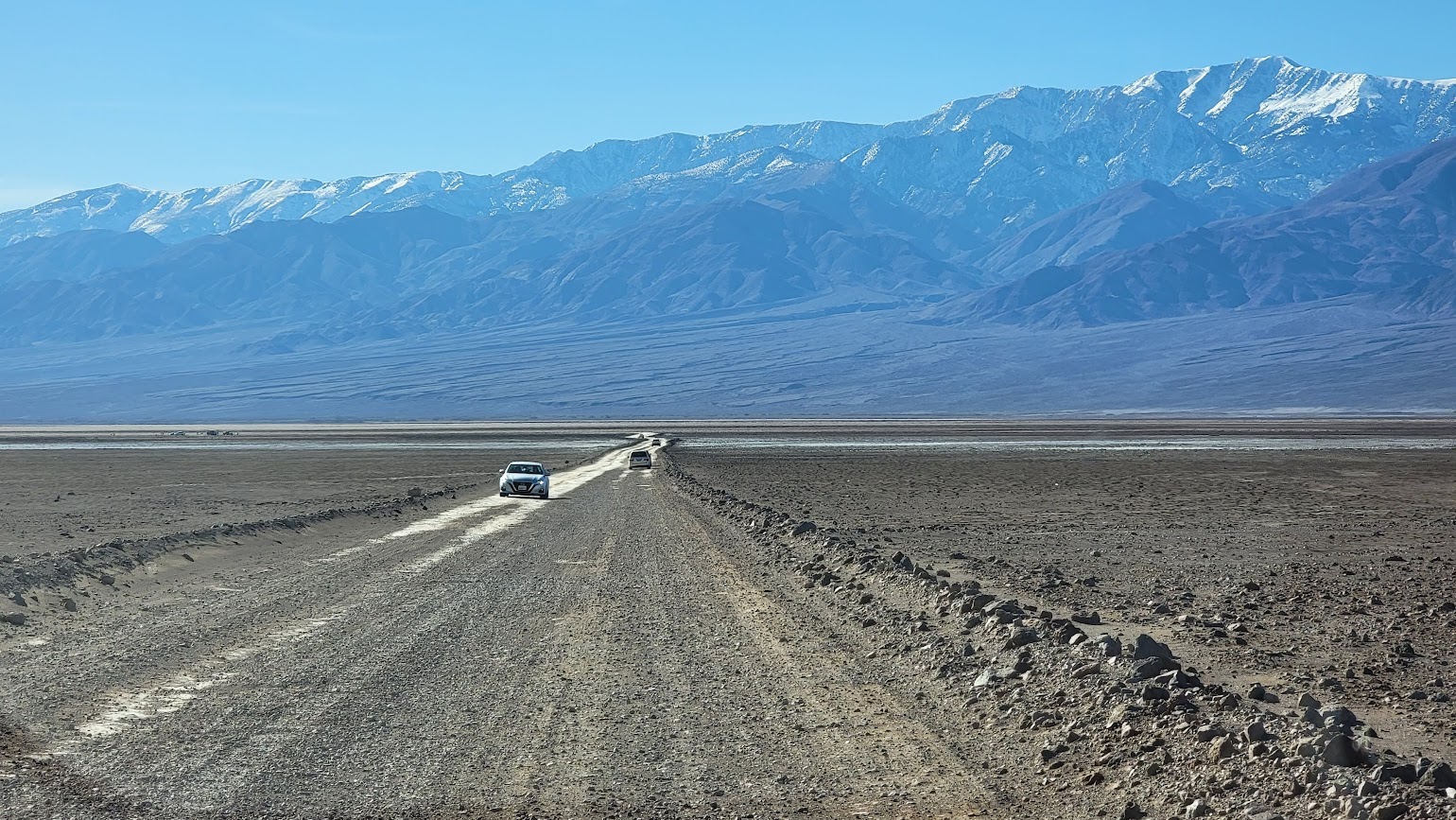 Now Death Valley boasts that it has the world’s lowest elevation golf course (Furnace Creek Golf Course) at 214 feet below sea level but this certainly wasn’t it! No lush green fairways here! Instead incredibly serrated and jagged peaks of salt eroded by wind and rain have created a landscape that is described in a 1934 Park Service guidebook which stated “only the devil could play golf on such rough links.” Yes, welcome to the “Devil’s Golf Course”! 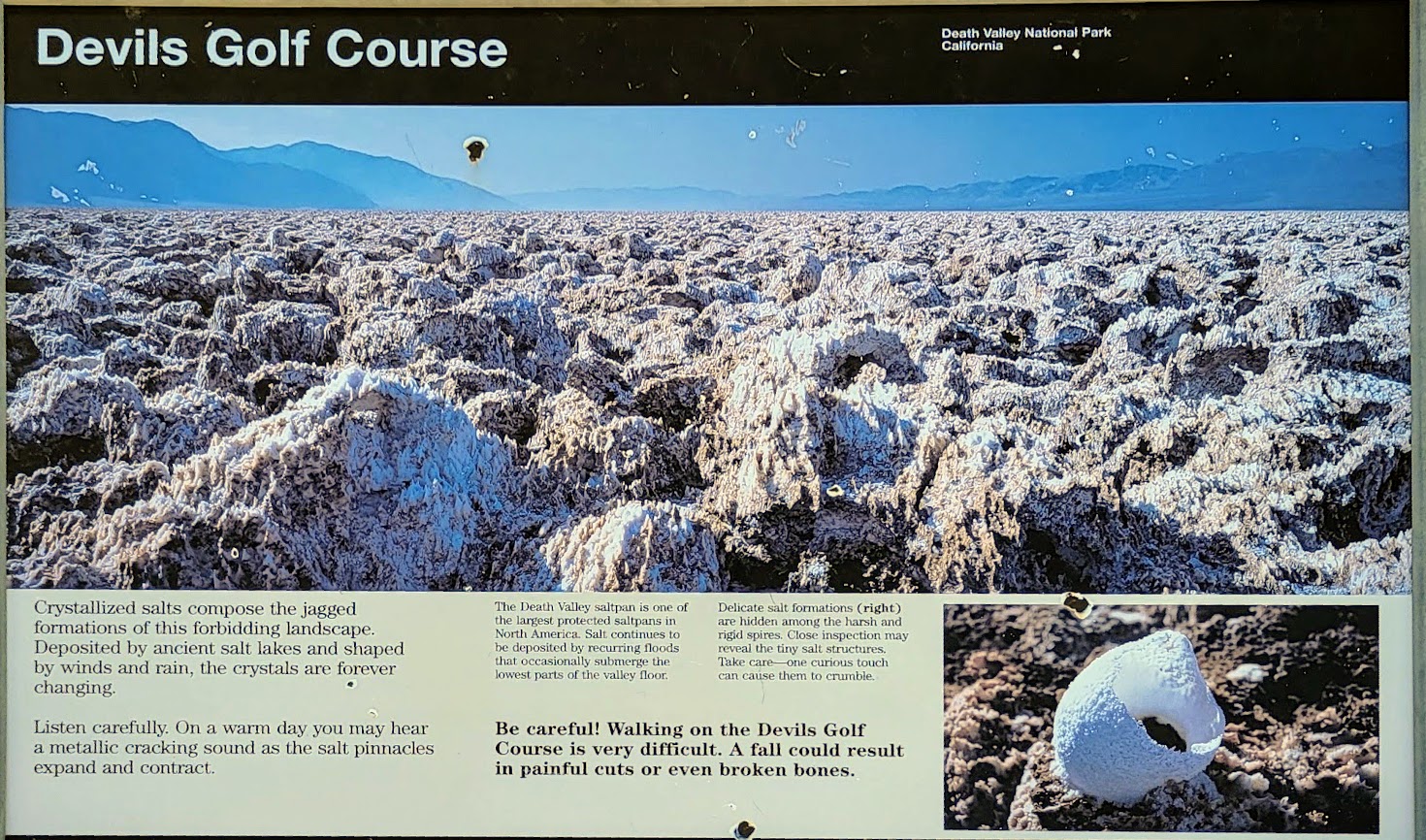 Part of an extensive salt pan, over many years, and even today, water from floods occasionally rise up through the salt bed and reshape the crystallized salt formations. When the water evaporated due to the blazing heat, the jagged formations were what was left behind. It is an ever changing environment! 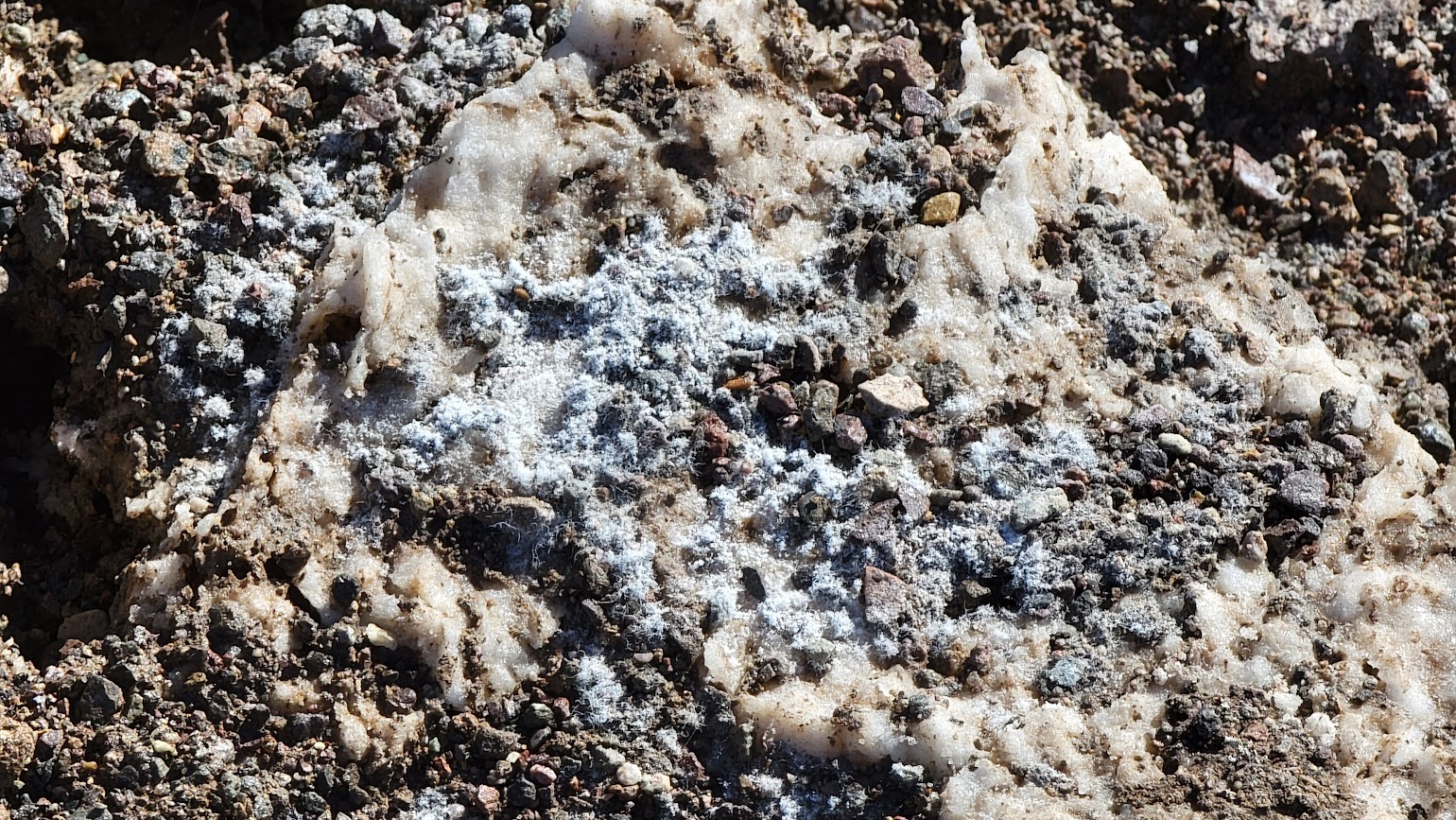 Prior to Death Valley becoming a national monument in 1934, exploratory holes were drilled by the Pacific Coast Borax Company. It was discovered that the salt and gravel beds of the Devil’s Golf Course extended to a depth of more than 1,000 feet! Later studies suggest that in places the depth ranges up to 9,000 feet. Yikes, that’s a lot of salt crystals! 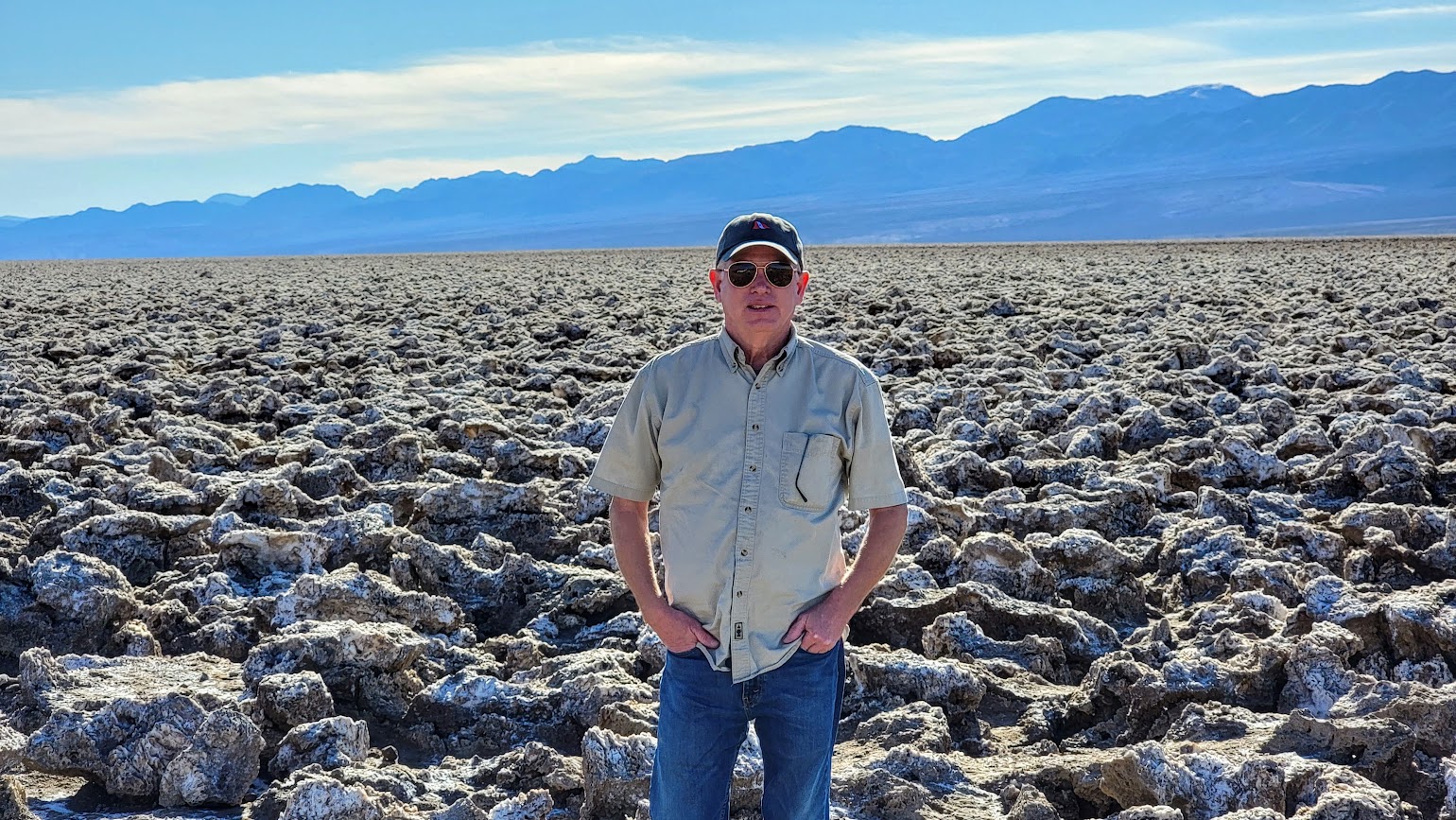 Signs warn visitors NOT to walk on the jagged salt crystals as a fall could result in a sprain, a painful cut or even a broken bone. Gee, do they really need to warn people? Just looking at the landscape should be enough of a warning!

Wanting to get a bird’s eye view, next a drive to Dantes View was a must! Towering 5,575 feet above Badwater Basin, on the ridge of the Black Mountains, with its awe-inspiring views is a very popular spot. 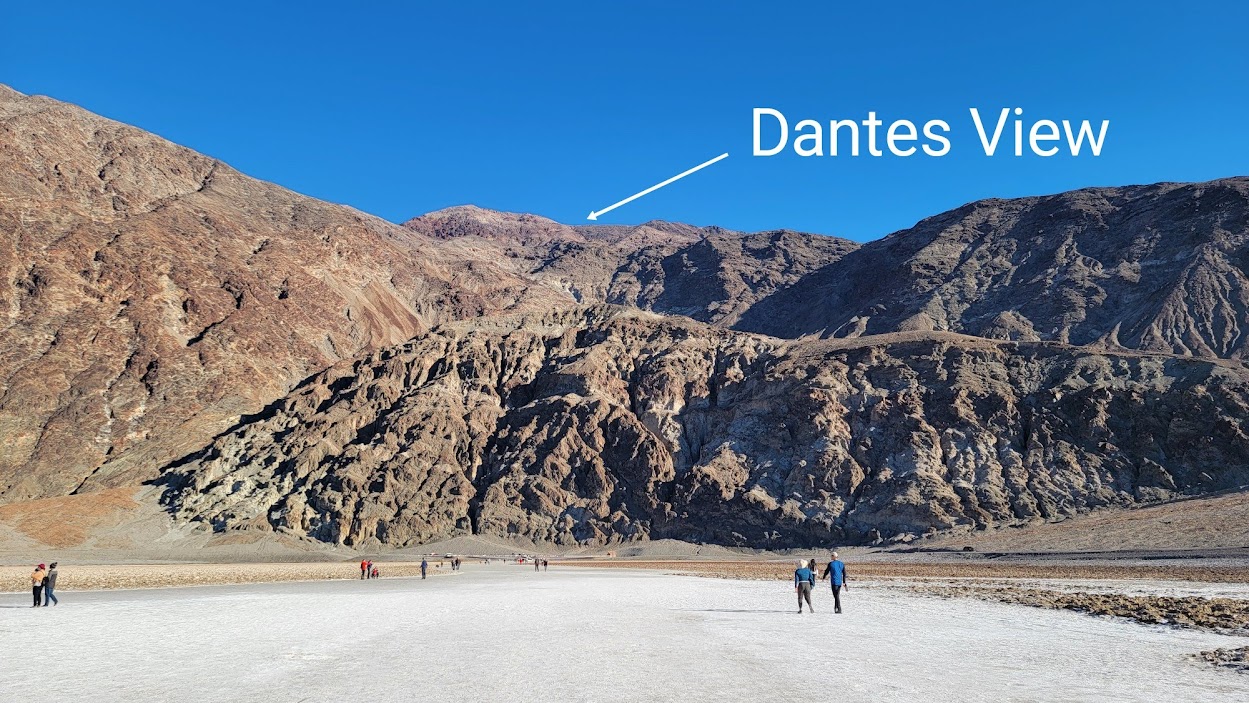 Access is via a 13.2-mile narrow and winding paved road off of Highway 190. If you’re thinking of taking a vehicle longer than 25 feet, as they say “fuhgeddaboudit”! Driving it in the car was bad enough (at least for me the passenger). They say that this is a great spot to view a sunrise or sunset but I wasn’t inclined to drive this scary road in the dark! 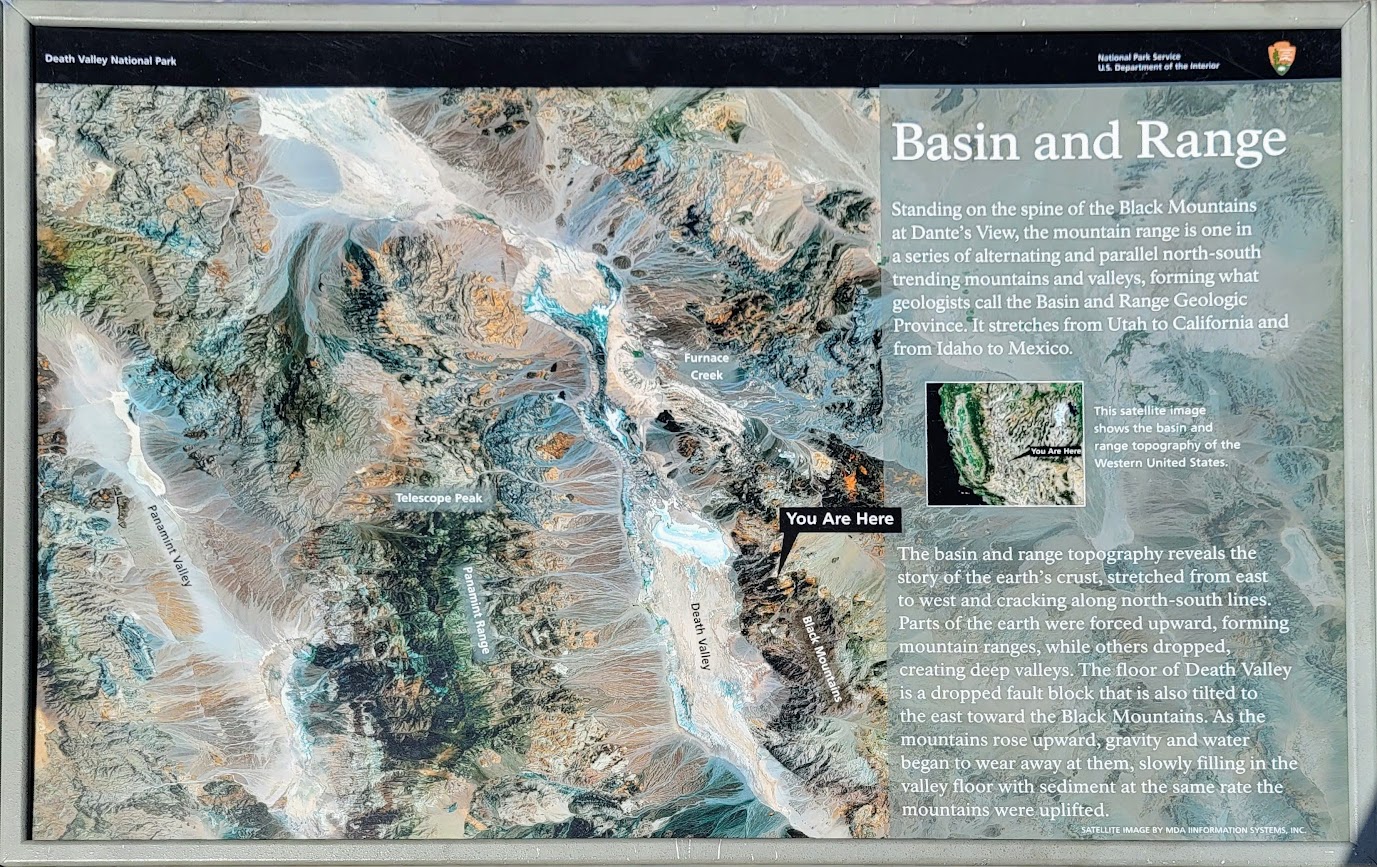 The viewpoint is named after Dante Alighieri, the author of Divina Commedia (Divine Comedy). Better known as Dante’s Inferno, the poem describes a journey through hell. Dantes View is therefore named for the hellish scenery of Death Valley.

The peaceful serenity of the spot was marred briefly from the noise of a drone that a tourist was flying overhead. Luckily another visitor quickly reminded the aviator that the flying of drones in any national park was absolutely forbidden. The person commented that they weren’t aware of that, quickly landing the drone. Glad he was cooperative!

The panorama offers absolutely breathtaking views of the swirling white salt flats of Death Valley below and the Panamint Range including Telescope Peak to the west. 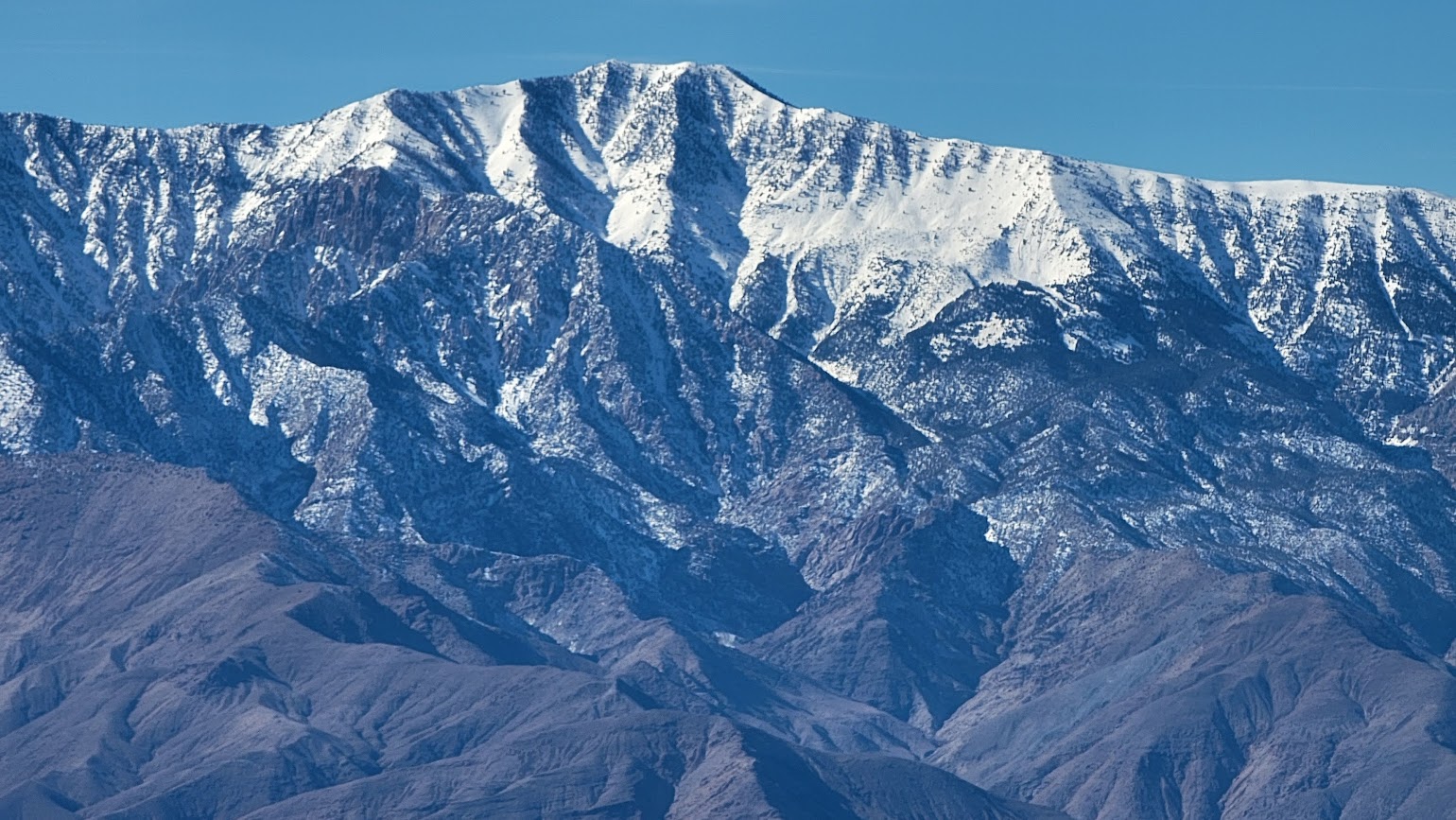 So surreal is the scenery and if you are into “a galaxy far, far away”, know that this was one of the many sites within Death Valley that was used in the filming of Star Wars. It was here that Obi-Wan, Luke and the droids observed the fictional Tatooine spaceport of Mos Eisley from the top of a promontory. Note our photo below is similar to the one that is published on Wikipedia. 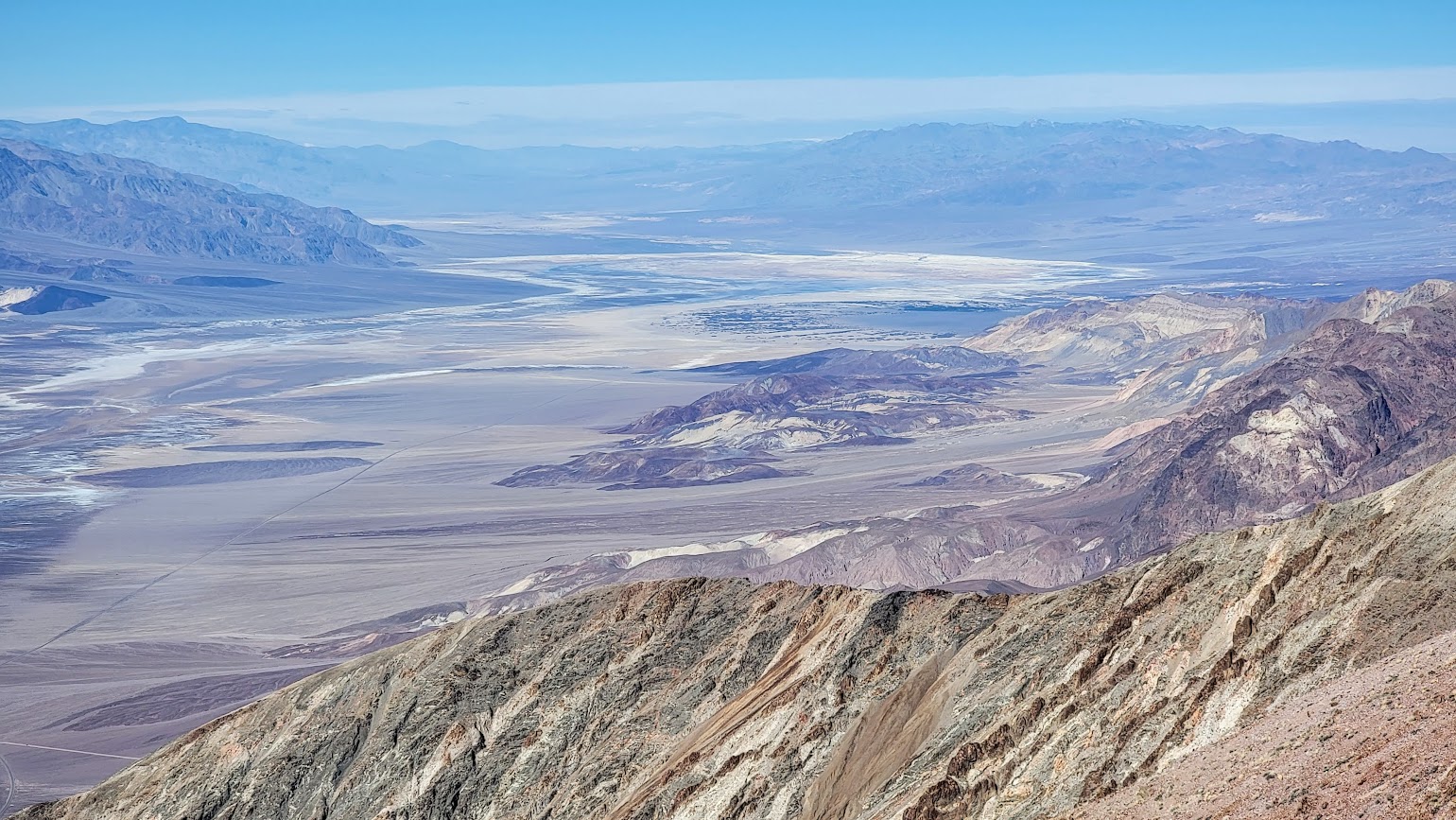 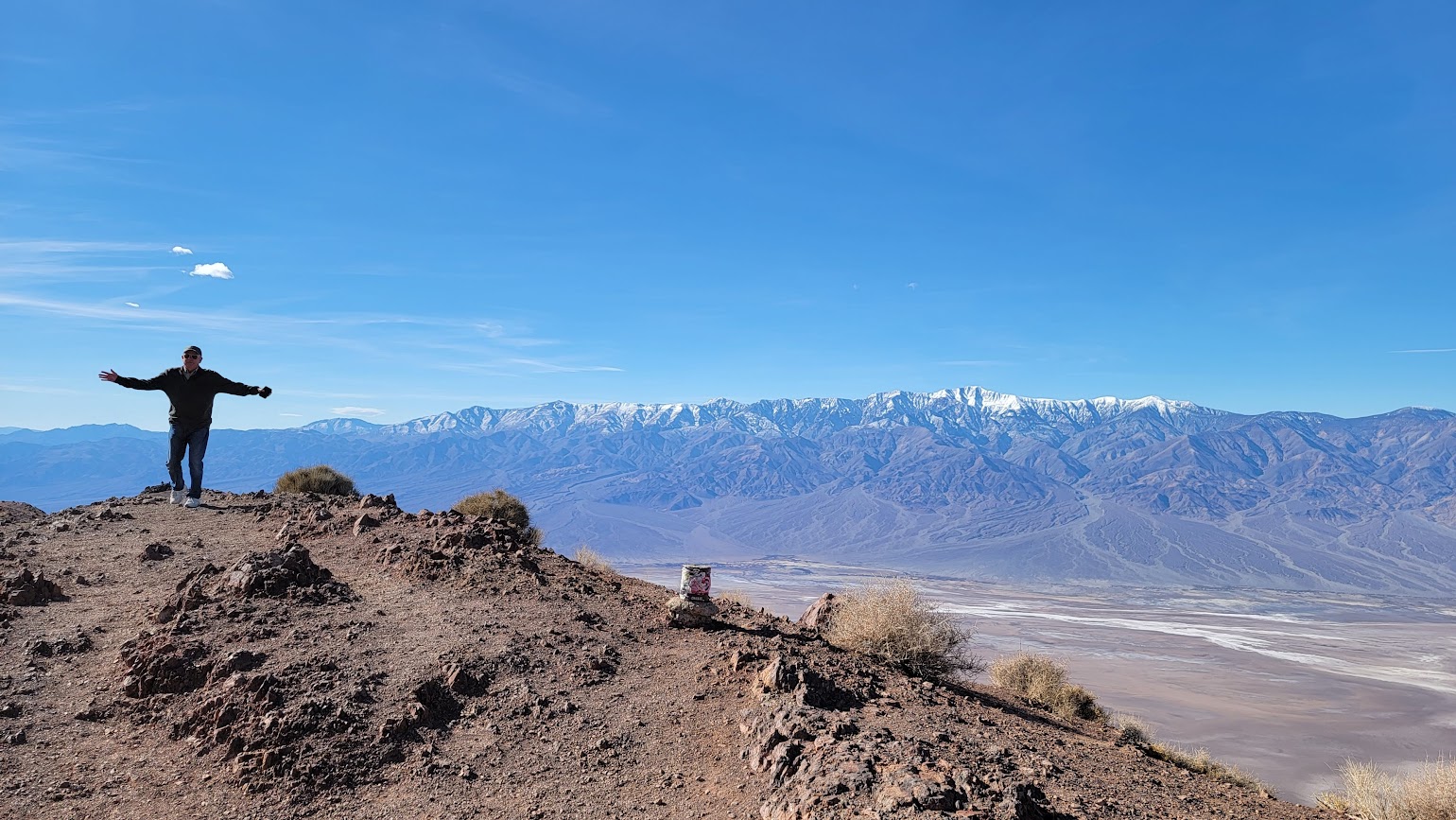 From the parking lot, trails extend along the ridges to the north and south giving visitors an opportunity to look farther up and down the valley. Because it was cold and windy, not much hiking for us!

Additional photos related to this post are available here.