Sure, you could drive the 2 hours or more from Vegas and spend a day in Death Valley, but having been there, a day definitely isn’t enough time to see even the major highlights. But if you don’t own an RV or a tent, then camping won’t work for you either.  So what to do?

Now according to National Geographic, “an oasis is an area made fertile by a source of freshwater in an otherwise dry and arid region.” A sandy desert surrounded by palm trees with a small water feature – that’s what everyone typically pictures when they think of an oasis. But hold on – in addition, according to Merriam-Webster, an oasis can also refer to “something that provides refuge, relief, or pleasant contrast”. A combination of those two definitions is exactly what “The Oasis At Death Valley” owned by Xanterra Travel Collection offers. 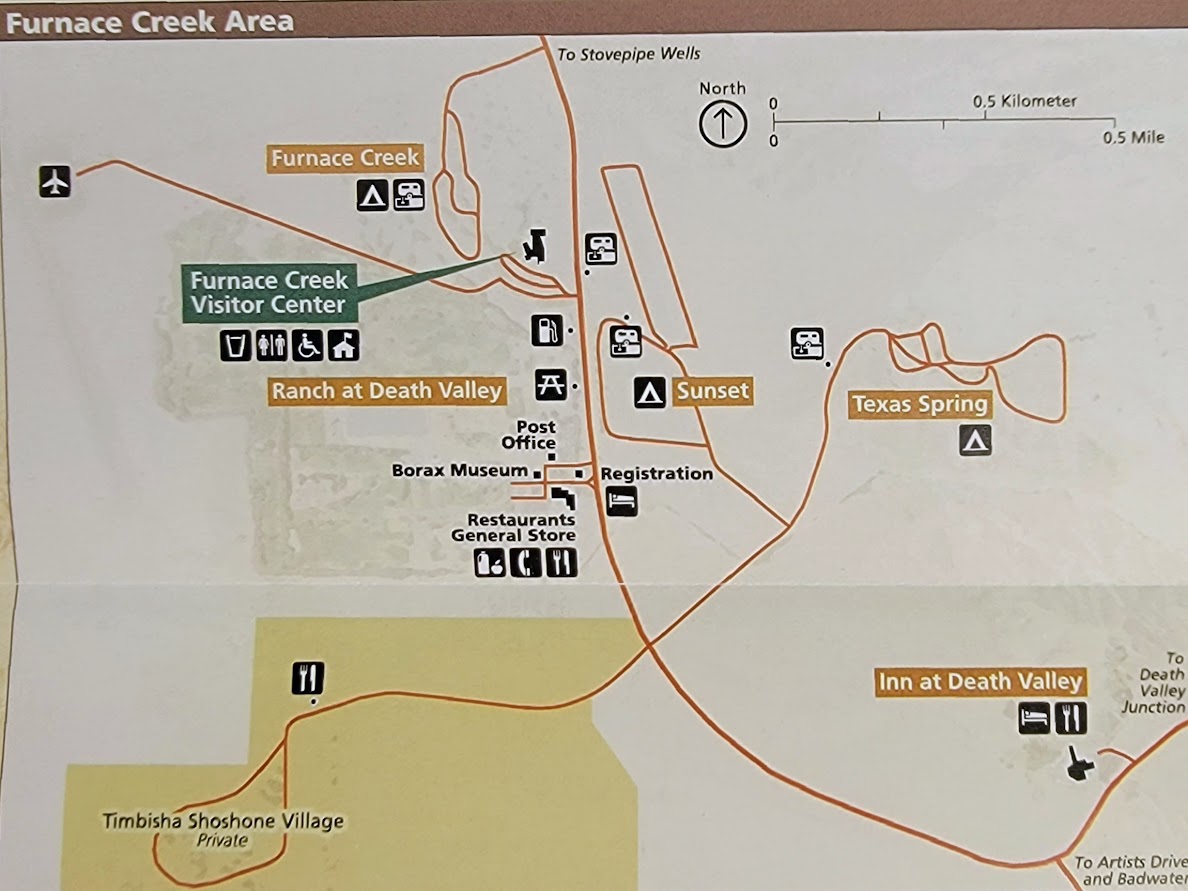 Two distinct hotels which date back to the 1920s, have been rejuvenated by a five-year, $150 million renovation, bringing both properties into the modern era. Choose from the more peaceful Four Diamond Inn at Death Valley and the family-friendly, adventure-focused Ranch at Death Valley. 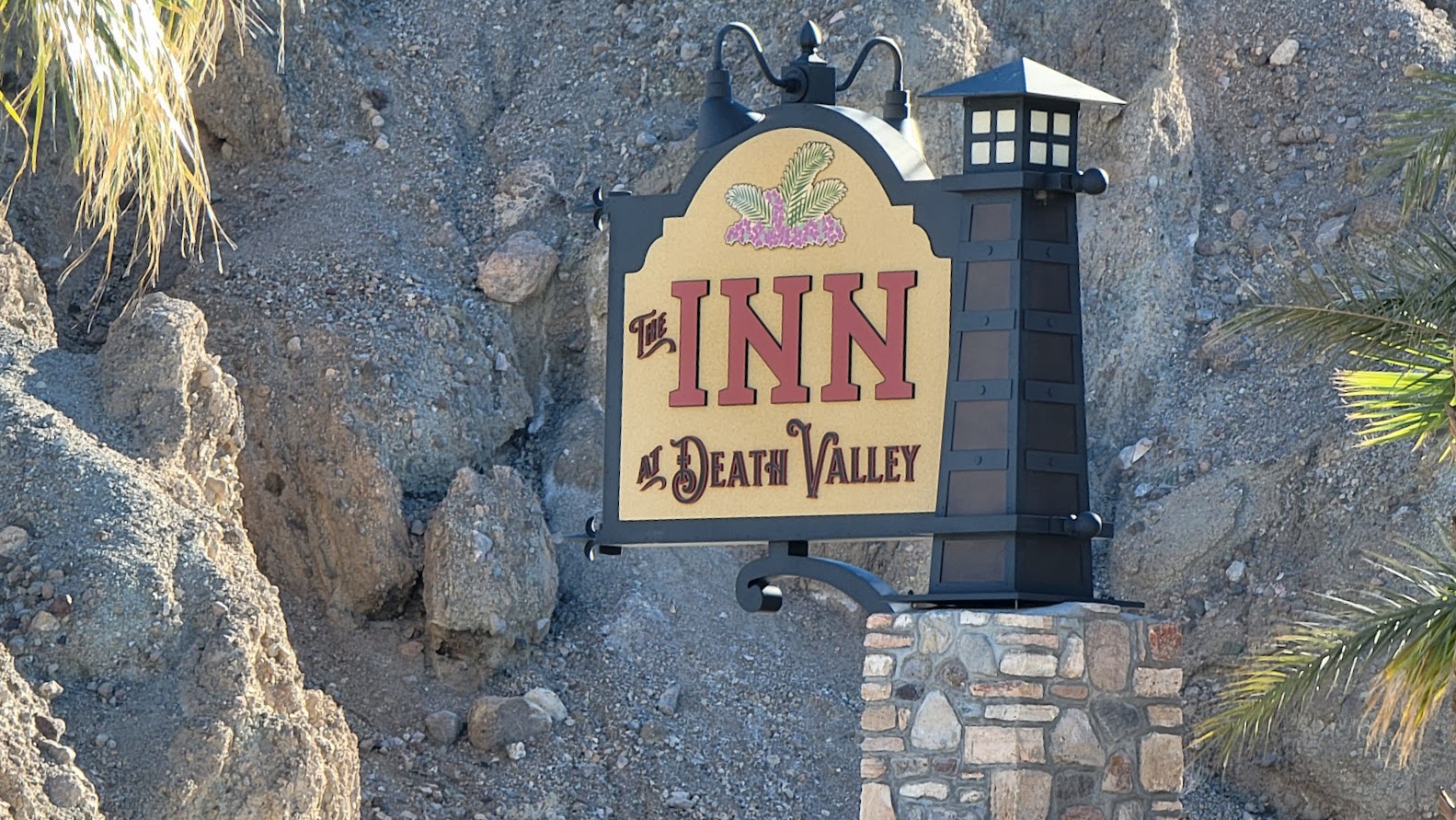 Situated on a hill at the foot of the Funeral Mountains off of CA-190 in Furnace Creek, the historic Inn at Death Valley built in 1927, formerly known as the Furnace Creek Inn, is today a AAA-rated four-diamond resort. It was once the exclusive desert escape for such Hollywood legends as Marlon Brando, Clark Gable, Ronald Reagan, John Wayne, Anthony Quinn and Carole Lombard. That’s quite a cast!

Even though the days of coddling Hollywood legends are gone, the tradition of pampering Death Valley visitors continues to be carried on today. With 66 rooms and 22 brand new casitas, the Inn offers a myriad of amenities sure to please the most discriminating tastes. Gardens of date palms, a bubbling fountain, a spring fed pool, a lounge, bar and dining room offering breakfast and dinner and a new library are among the many amenities.

Obviously we didn’t stay here nor did we see any of the rooms but we were impressed just exploring the inn. Elegant and sophisticated, but cozy, those are the words we would use to best to describe our first impression. Once in the parking lot, a long and (a little spooky) tunnel leads to the elevators. These following photos tell the story: 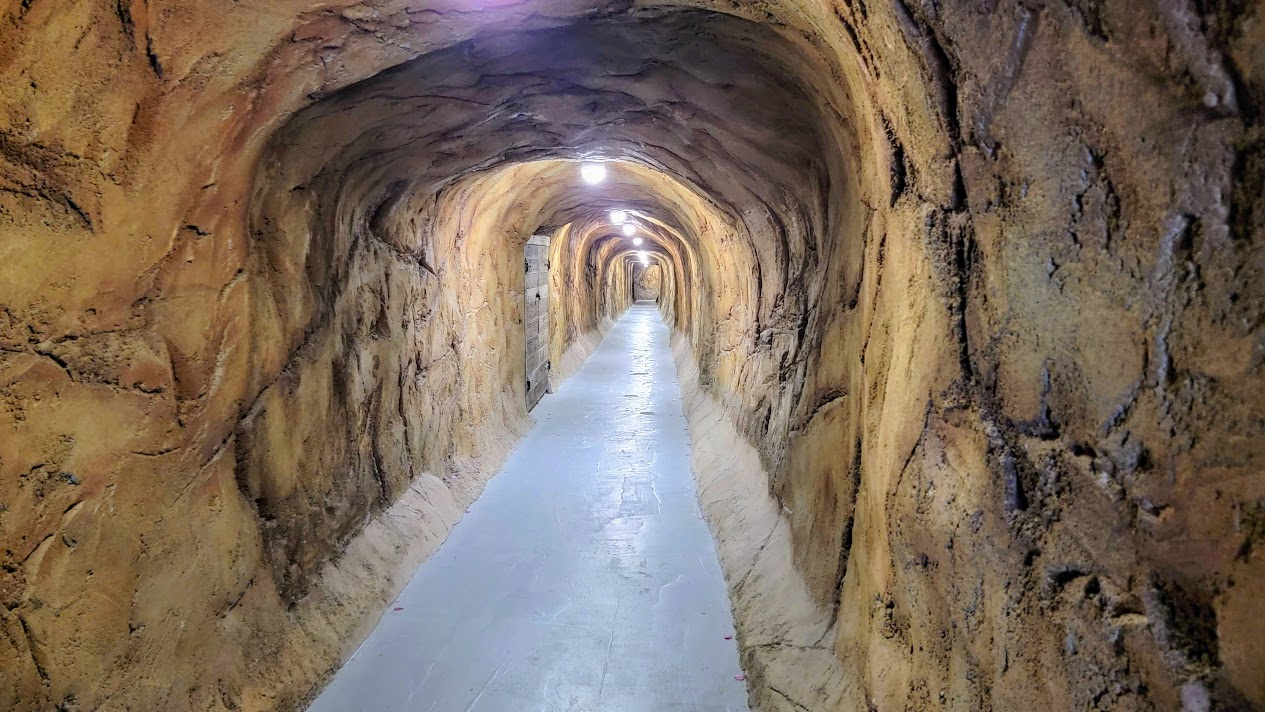 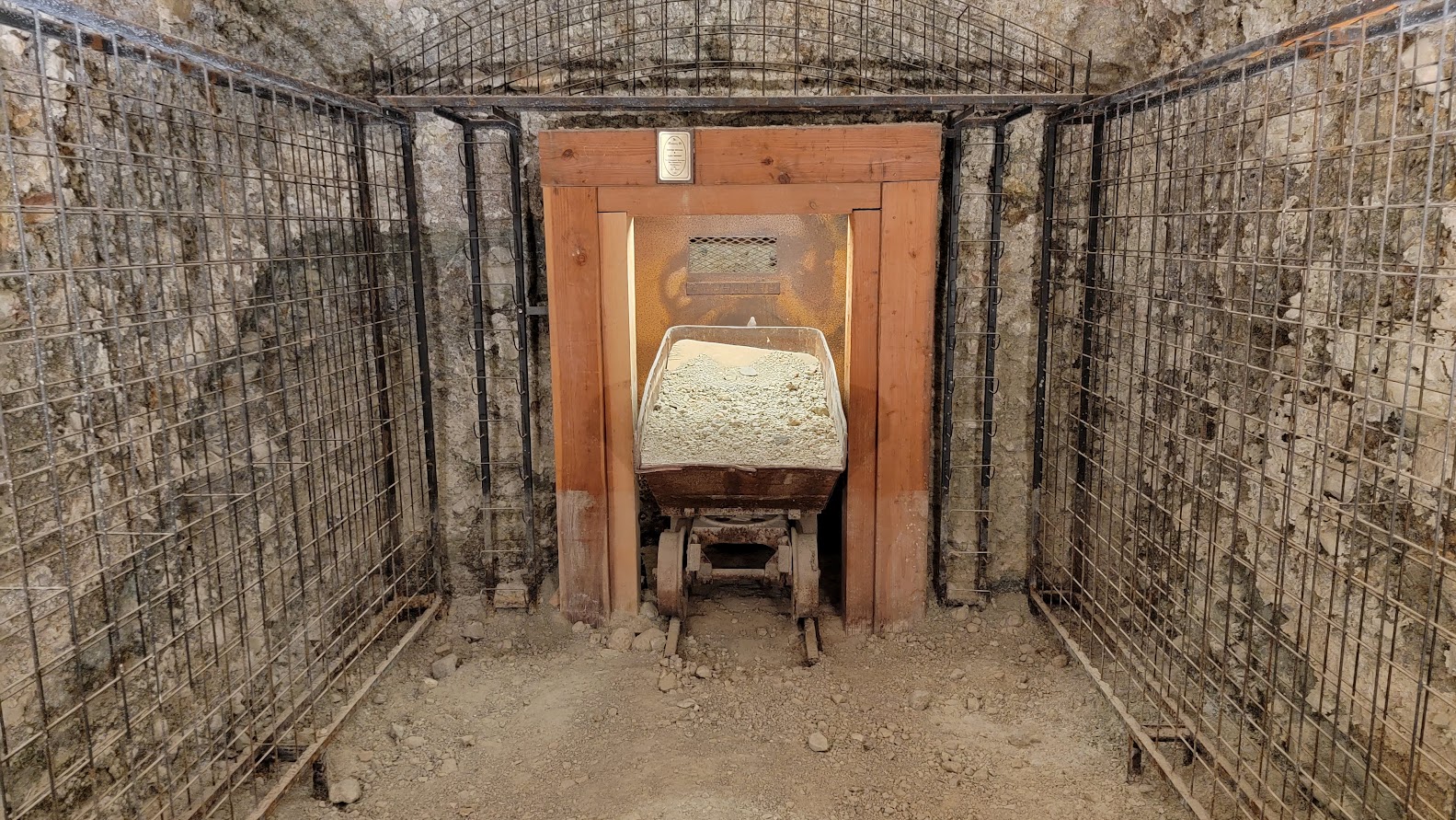 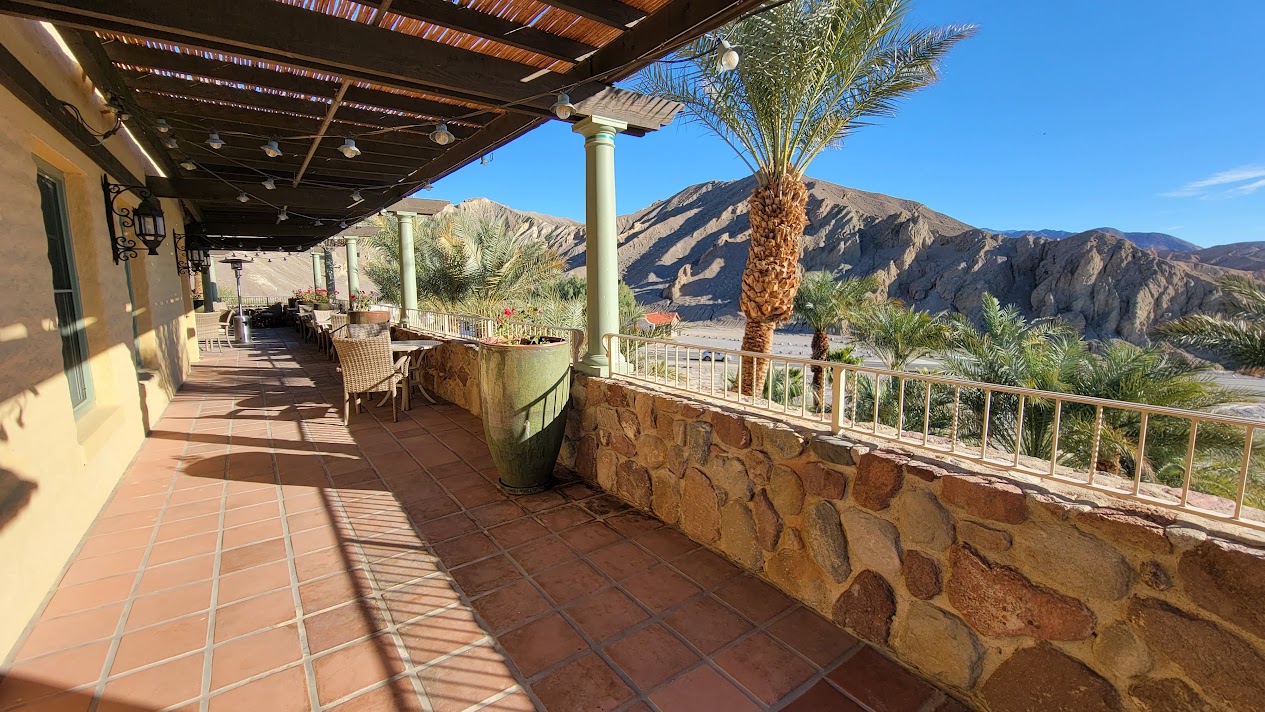 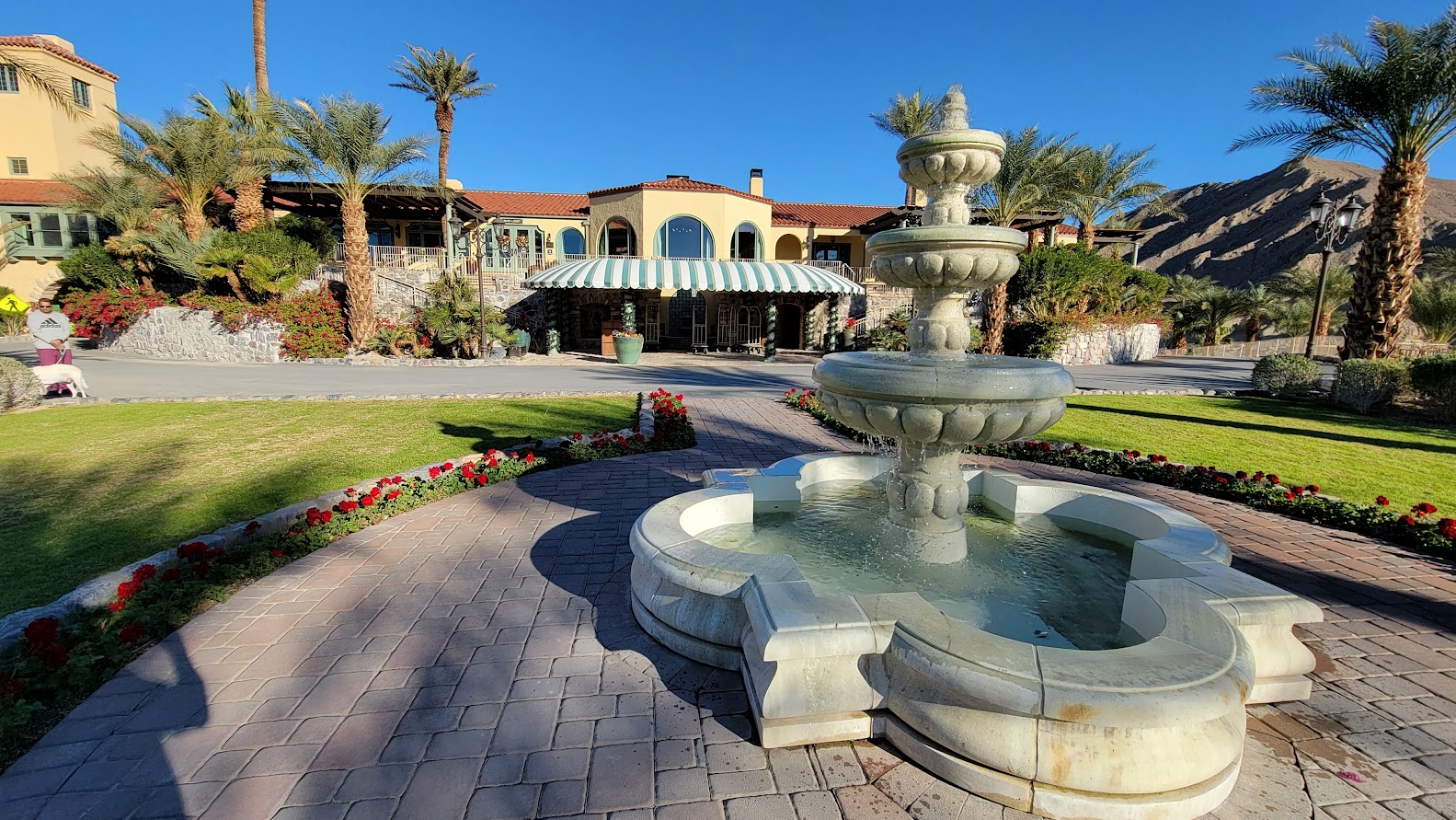 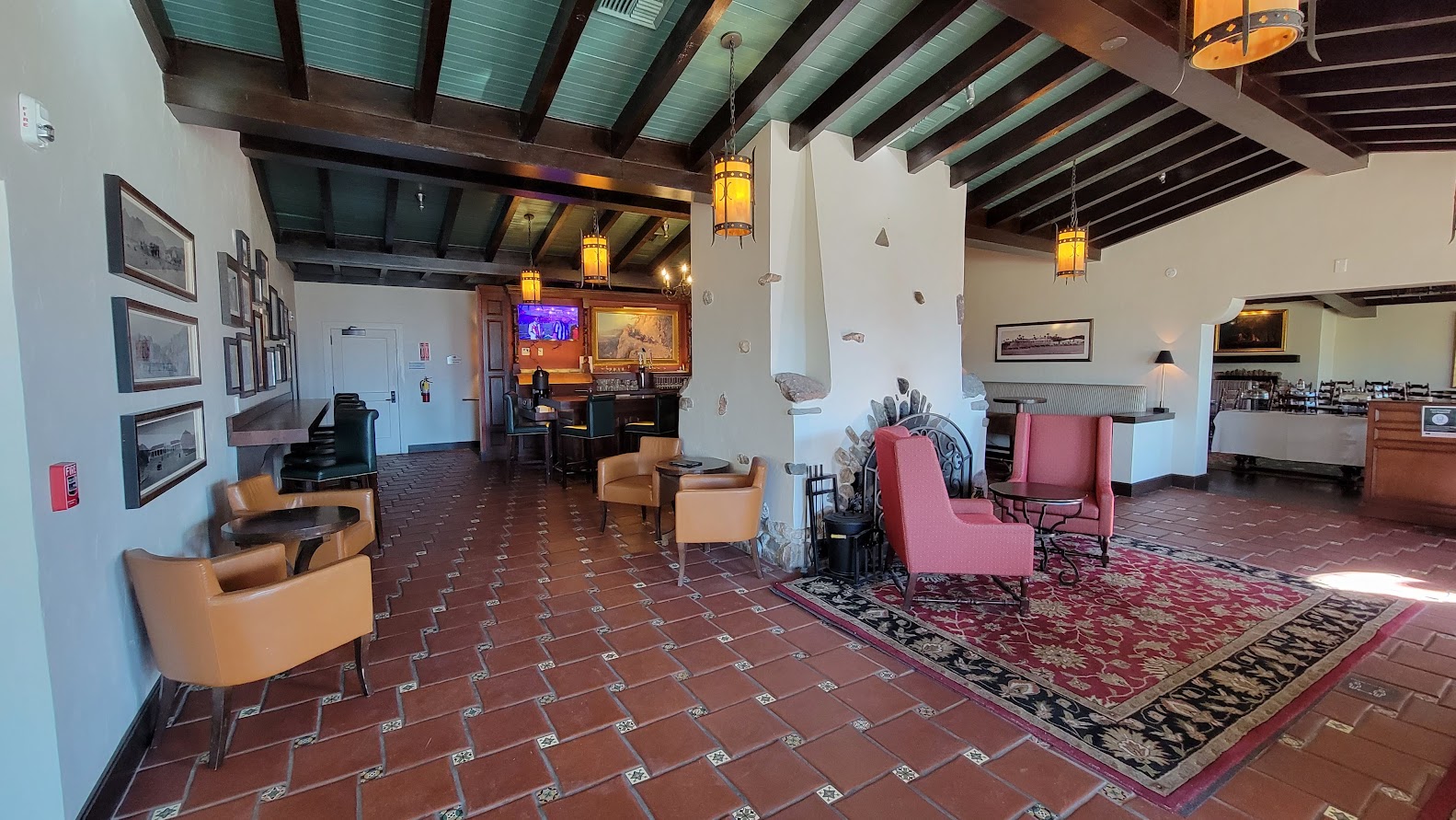 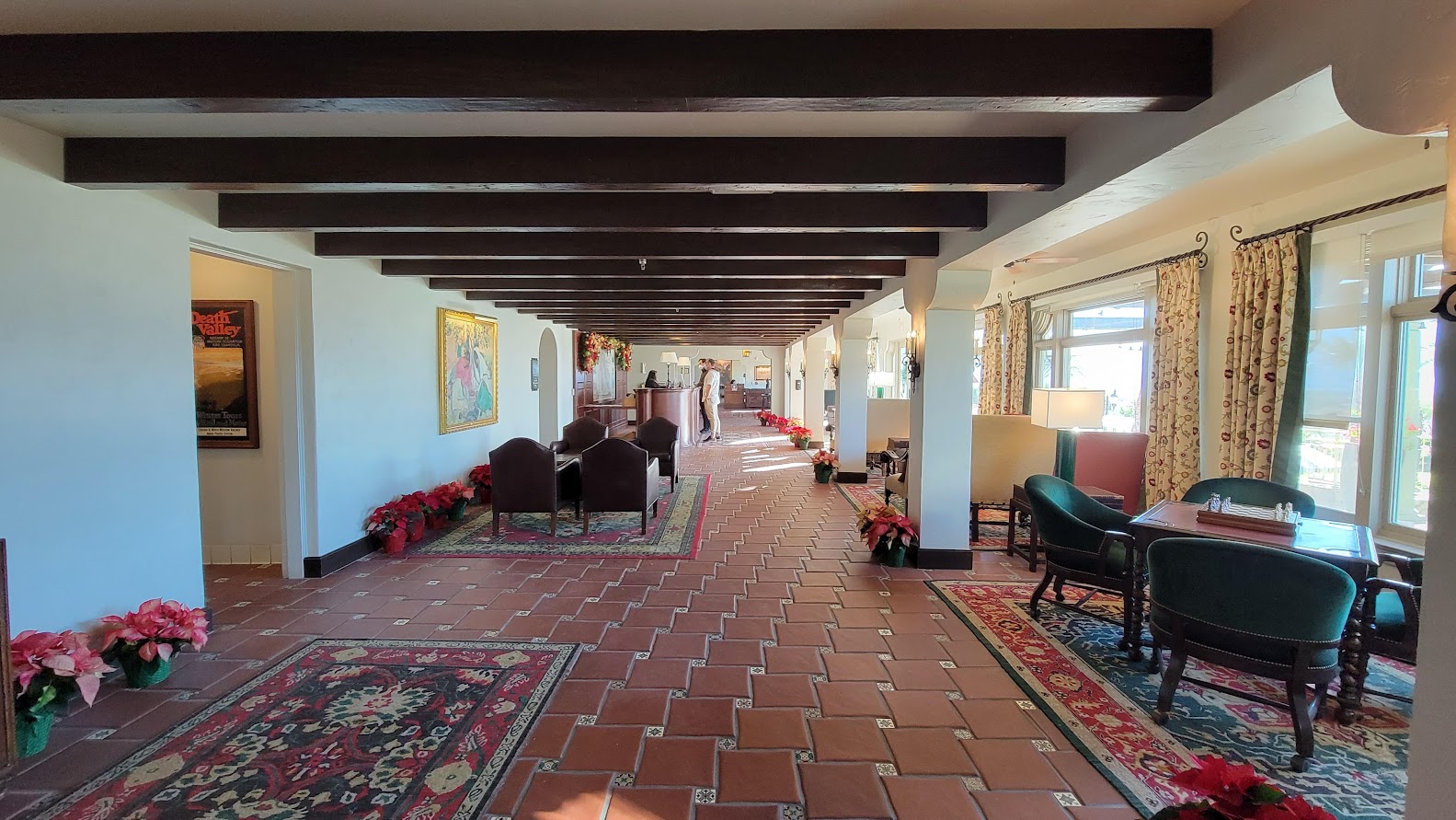 Set along Highway 190 next to the National Park Service Visitor Center is the other piece of The Oasis at Death Valley property – The Ranch at Death Valley. 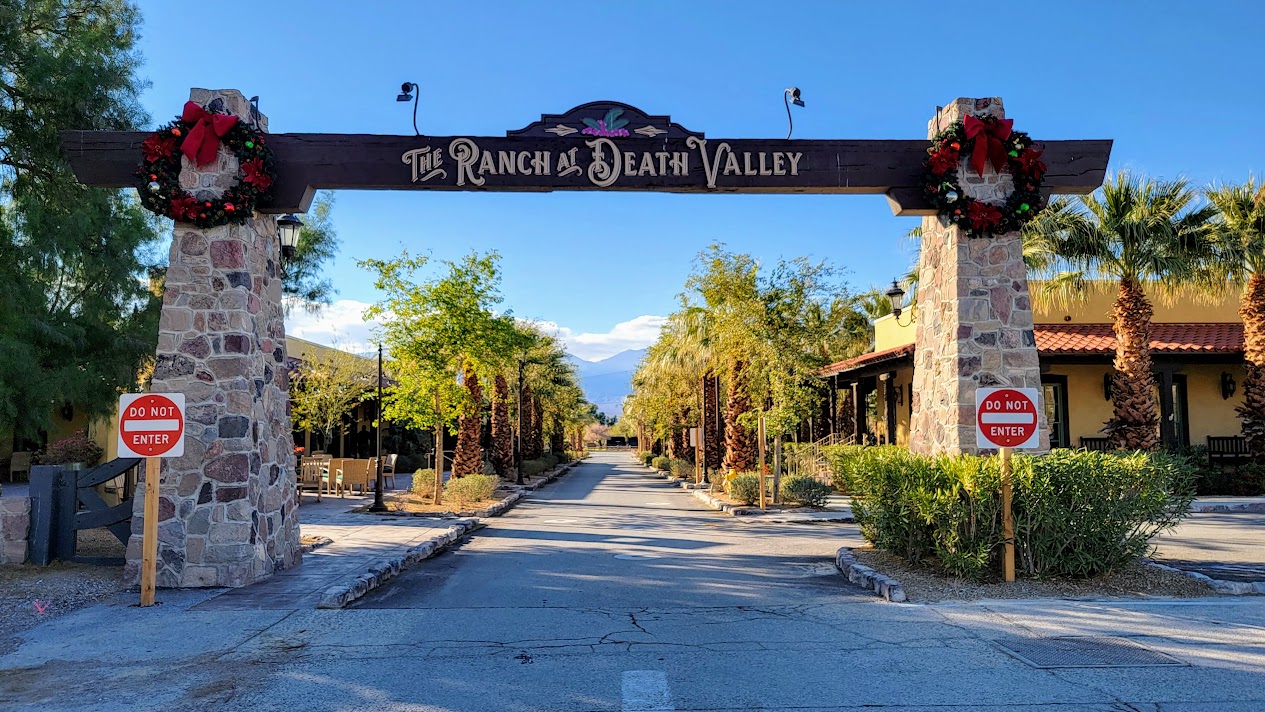 With 275 lodge rooms and cabins, the former working ranch today is a complete resort complex with a classic town square with majestic date palms and mission California architecture. Amenities offered are access to an 18-hole, world’s lowest elevation golf course, three restaurants, a saloon, ice cream and coffee bar, general store with souvenirs as well as groceries, an 87-degree spring-fed pool, sports courts, a children’s playground, horseback and carriage rides at their stables and much more. Whew, what don’t they have? With all this, you won’t want to leave Death Valley! 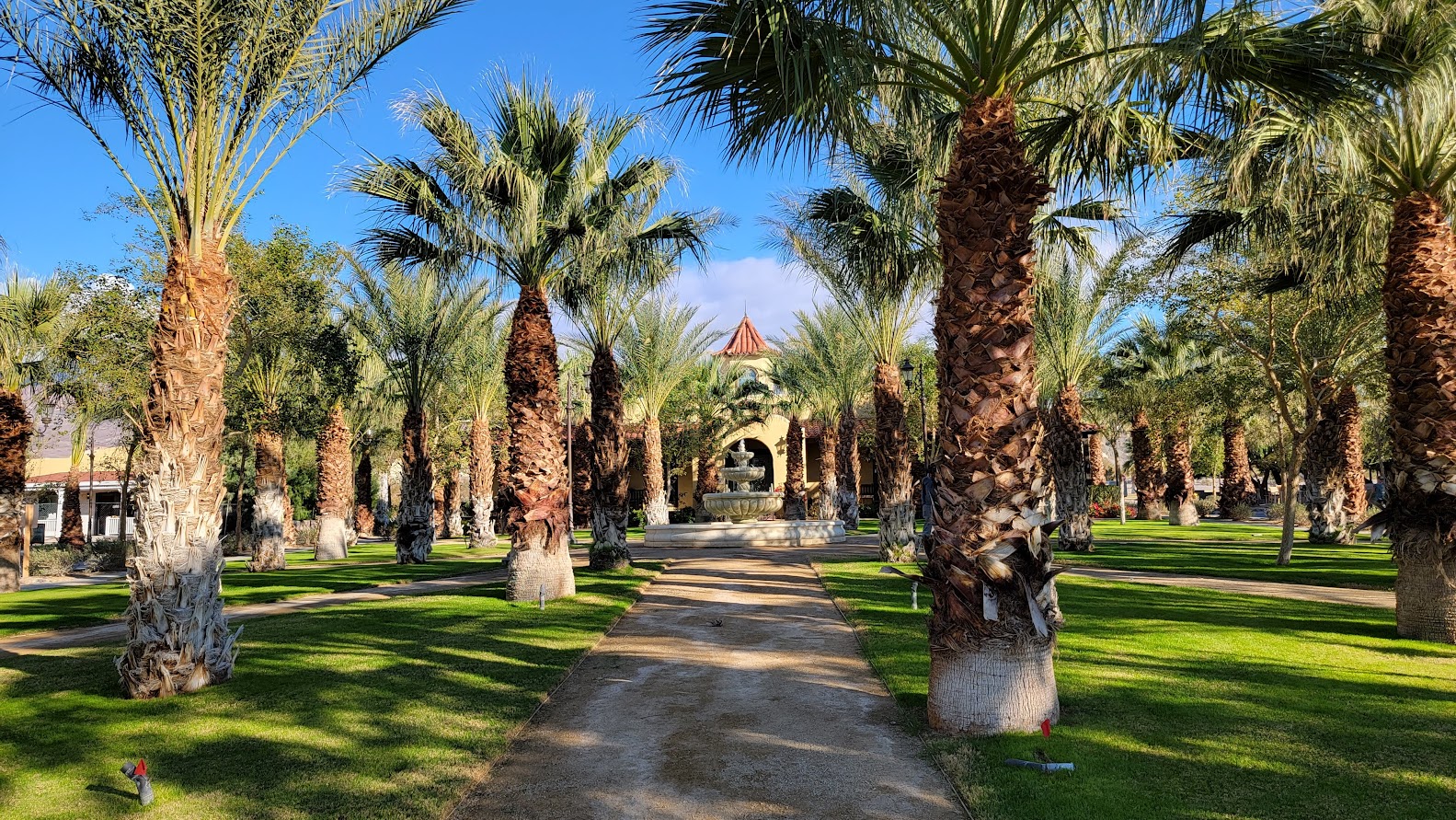 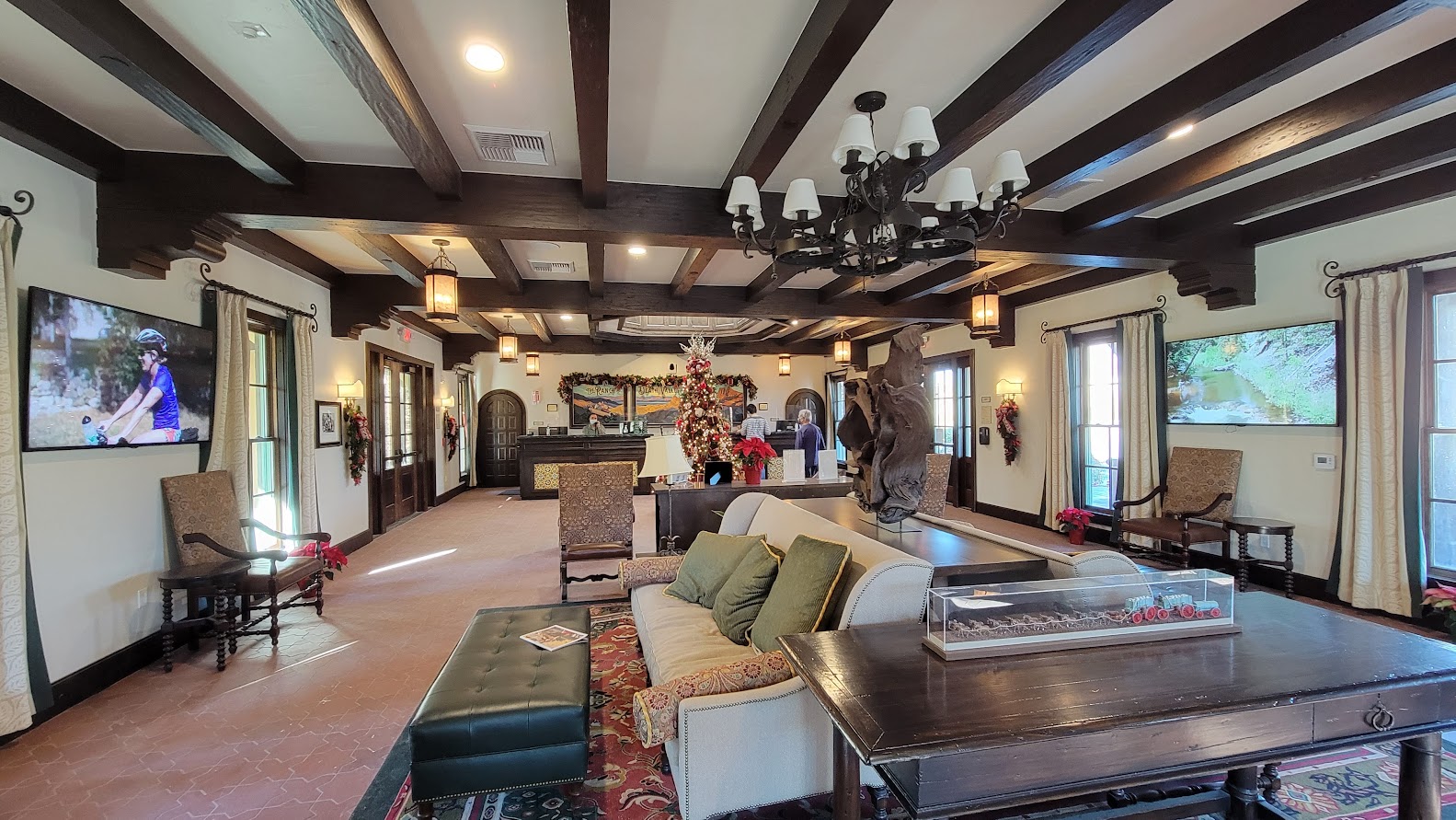 This place is a bargain compared to the Inn with daily rates ranging from $199 to $269. 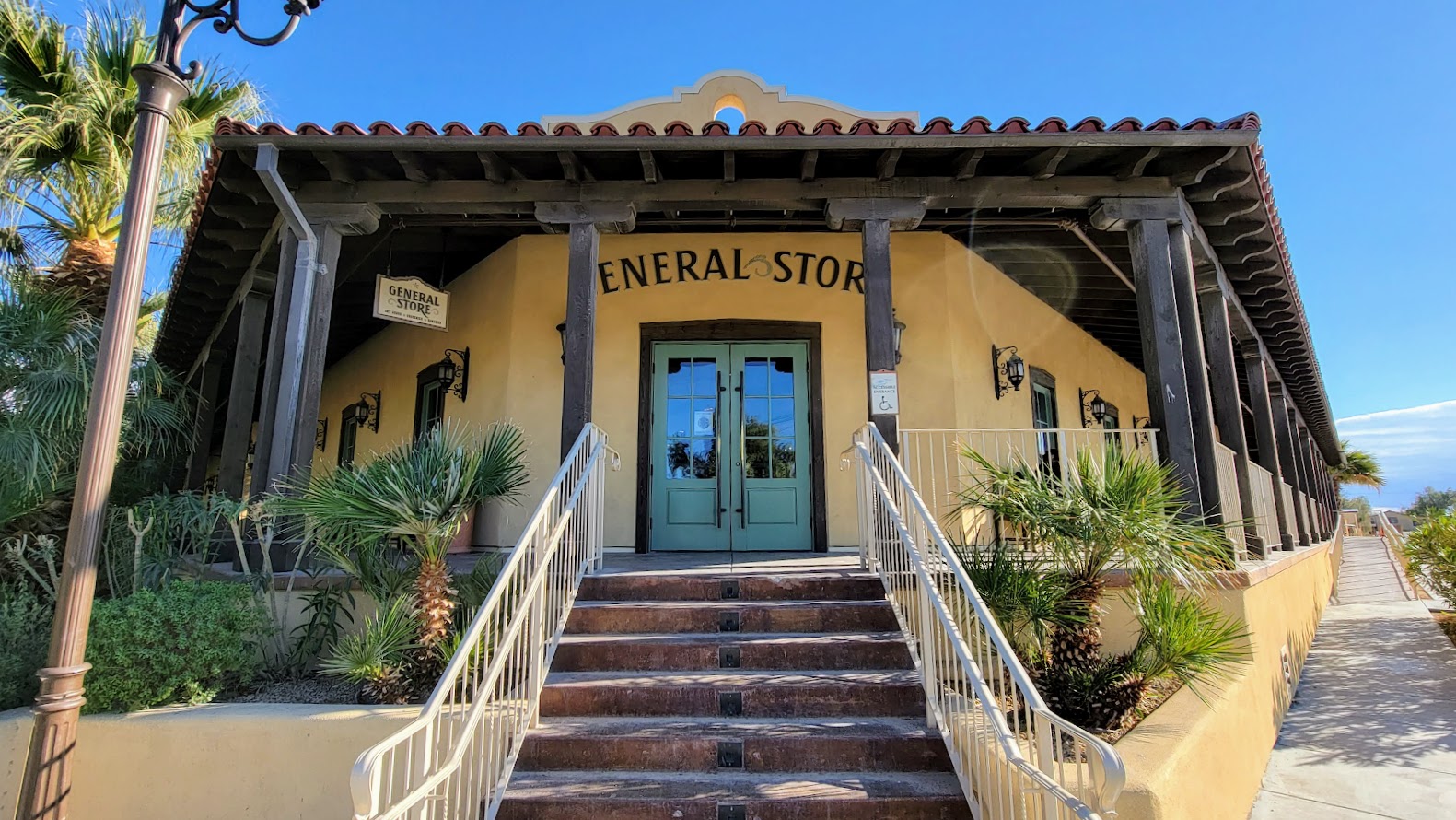 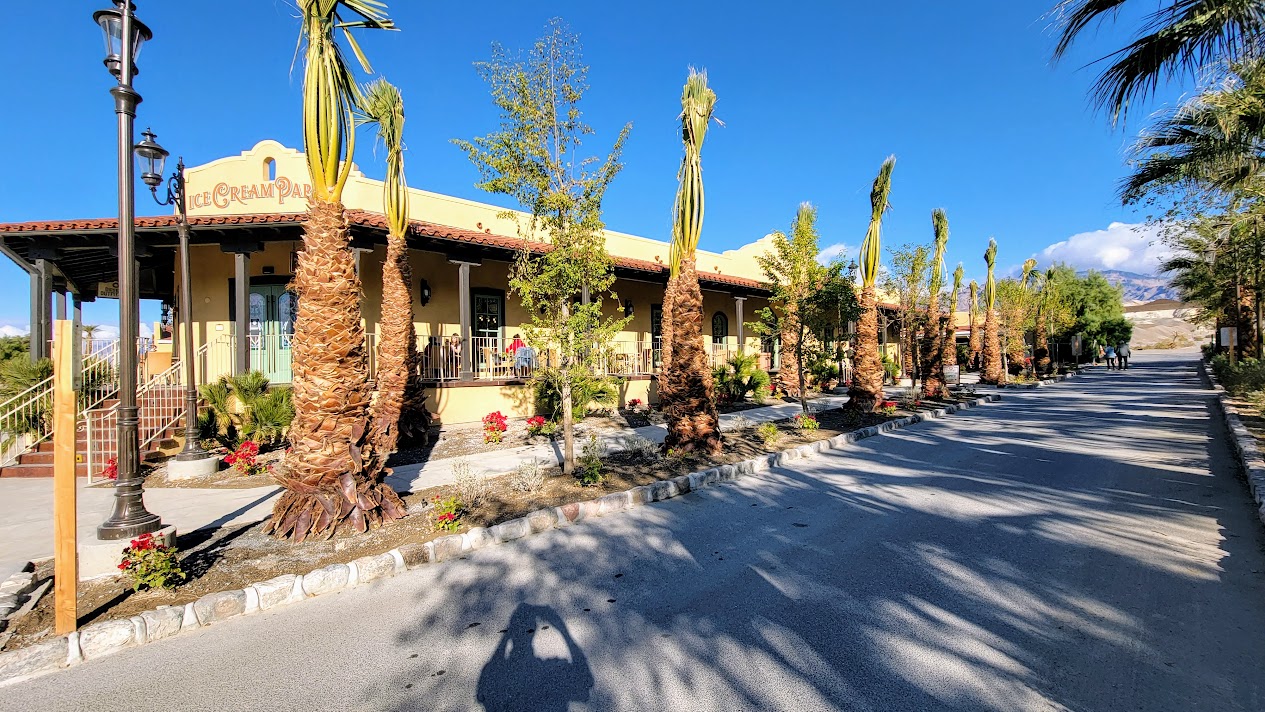 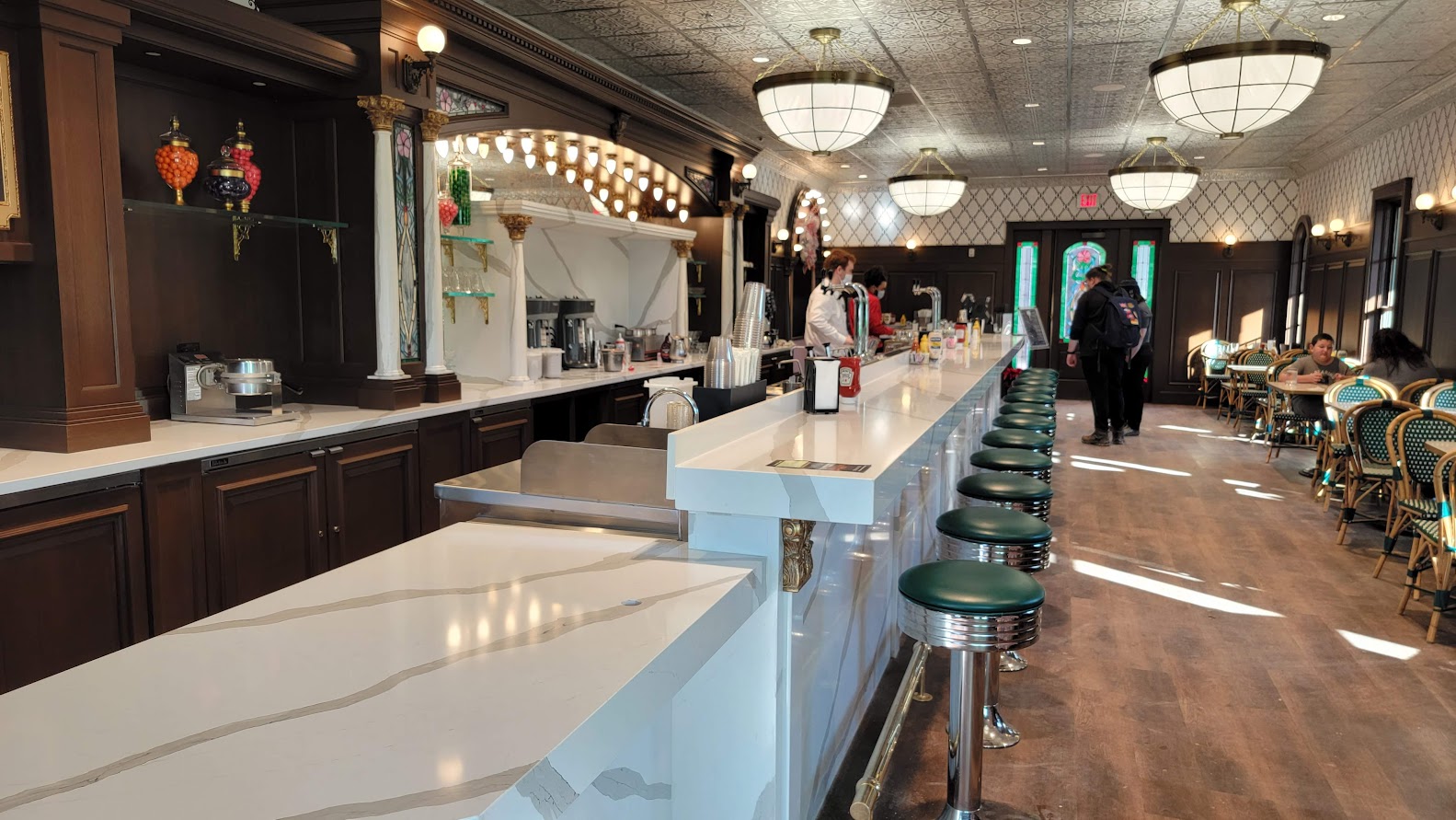 And to top all that off, there was a history lesson at the Borax Museum at the Ranch! But that will be discussed in another post! Additional photos of both hotels can be found here.

Here’s a video produced by The Oasis showing an overview of both properties:

Just as a note, there are a few other hotels within Death Valley but none of them as centrally located as The Oasis. We didn’t go to any of them so can’t make any comments about what they are like.

Panamint Springs Resort (11 miles from Death Valley), originally owned and operated by Buffalo Bill Cody’s cousin, Agnes Cody and opened in 1937 is labelled as a small, rustic, western style resort located in Panamint Valley. Rates are $65/night. Definitely cheaper but you probably get what you pay for!

Stovepipe Wells Village (5.45 miles from Death Valley) is another hotel billed as a rustic and authentically Western hotel. Rates seem to be in the range of $144 to $179 (starting at).

So there you go, no RV or tent required to spend some luxury time at Death Valley, just buckets of cash are the only requirement!