The word ‘desert’, makes you think of sand and sand dunes, and where there’s desert and sand, there must be dunes, right? Well, no, that’s not necessarily true, especially at Death Valley National Park.

For dunes to exist, there are three prerequisites:

Surprisingly only 1% of the entire 1.34 million acres in Death Valley National Park are covered by sand dunes. That’s because many areas in Death Valley have the sand and the prevailing winds but only a few areas of the park have the geographic features, namely mountains, to trap the sand.

But then we learned that there actually were some dunes, in fact six separate areas of dunes, one nearby and easily accessible by car, several requiring long drives, often on unpaved roads and a few requiring long hikes. Here’s a breakdown of six dune systems:

Probably pretty easy to figure out which dunes we chose to explore. Located about 25 miles from Furnace Creek and conveniently located just off CA-190 just east of Stovepipe Wells Village are the very popular Mesquite Flats Sand Dunes. 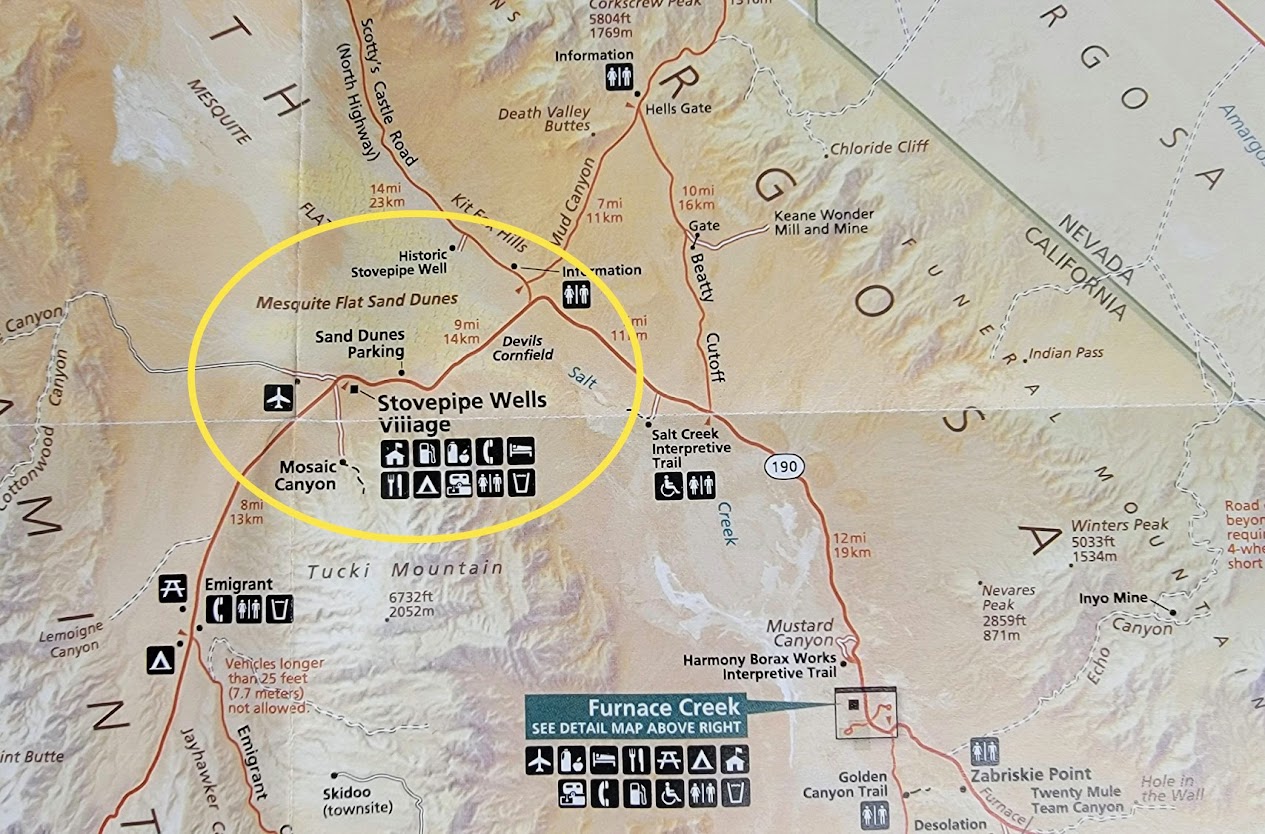 These dunes are named for the mesquite trees which grow in abundance in the area. To avoid being buried, the trees must twist as they grow. Leafless brown trunks are often exposed by the shifting sands as can be seen in the photo below. 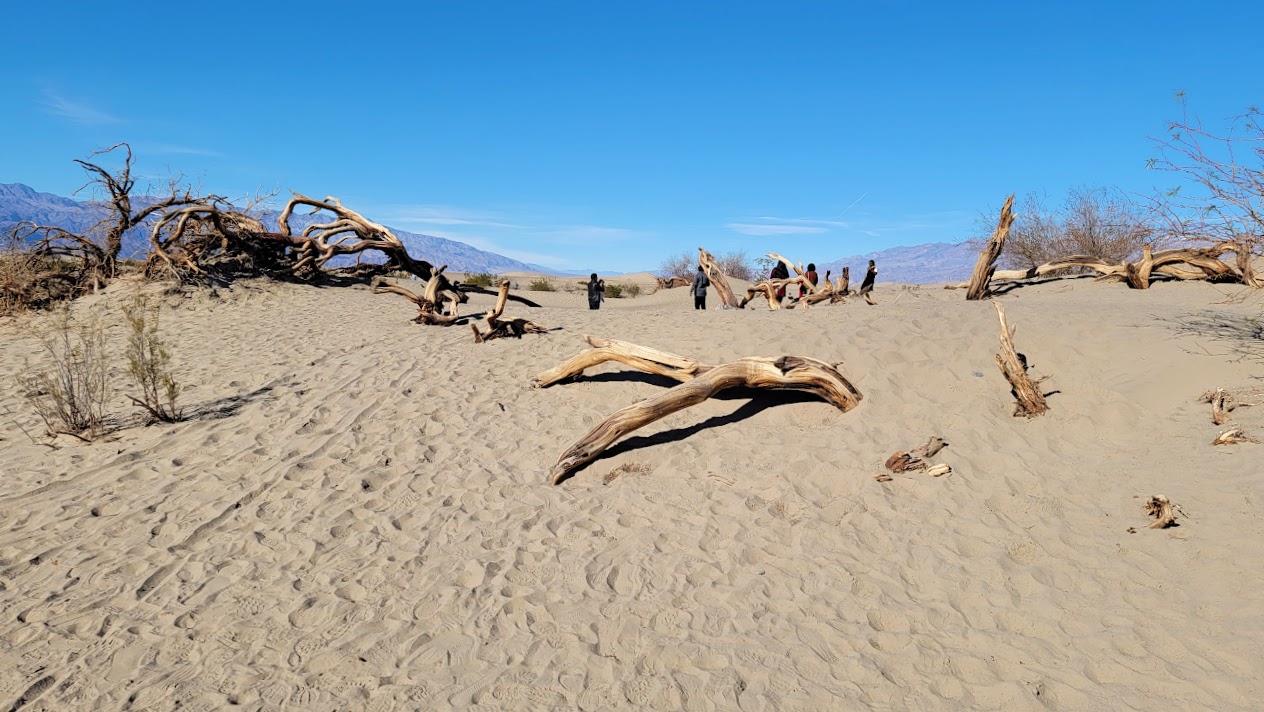 On the day of our visit here, finding a space in the adequate parking lot wasn’t a problem. Probably on busier days or at specific hours of the day, parking might be challenging especially at sunrise and sunset when the contrasts created by the ripples and edges in the dunes are a photographer’s delight. It is also a great place for star gazing. Vault toilets are located in parking lot.

As usual there are the usual signs about hiking, water, heat, cold, biting critters, rattlers, no off roading, etc., etc. Gee, maybe I’ll just sit in the car! :>)  Guess I shouldn’t really joke about it, a 27 year old woman died hiking here in November, 2021. No cause of death was given. How tragic! 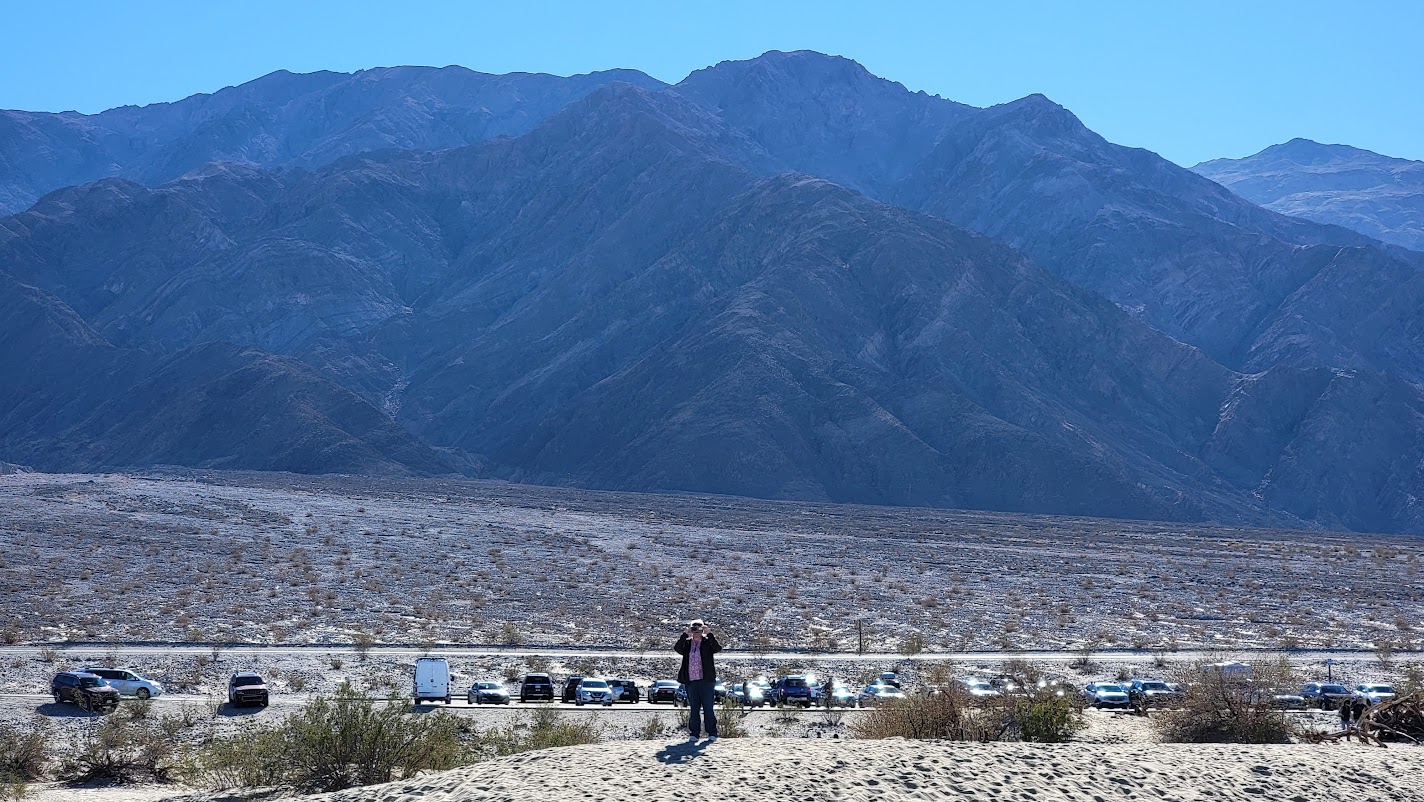 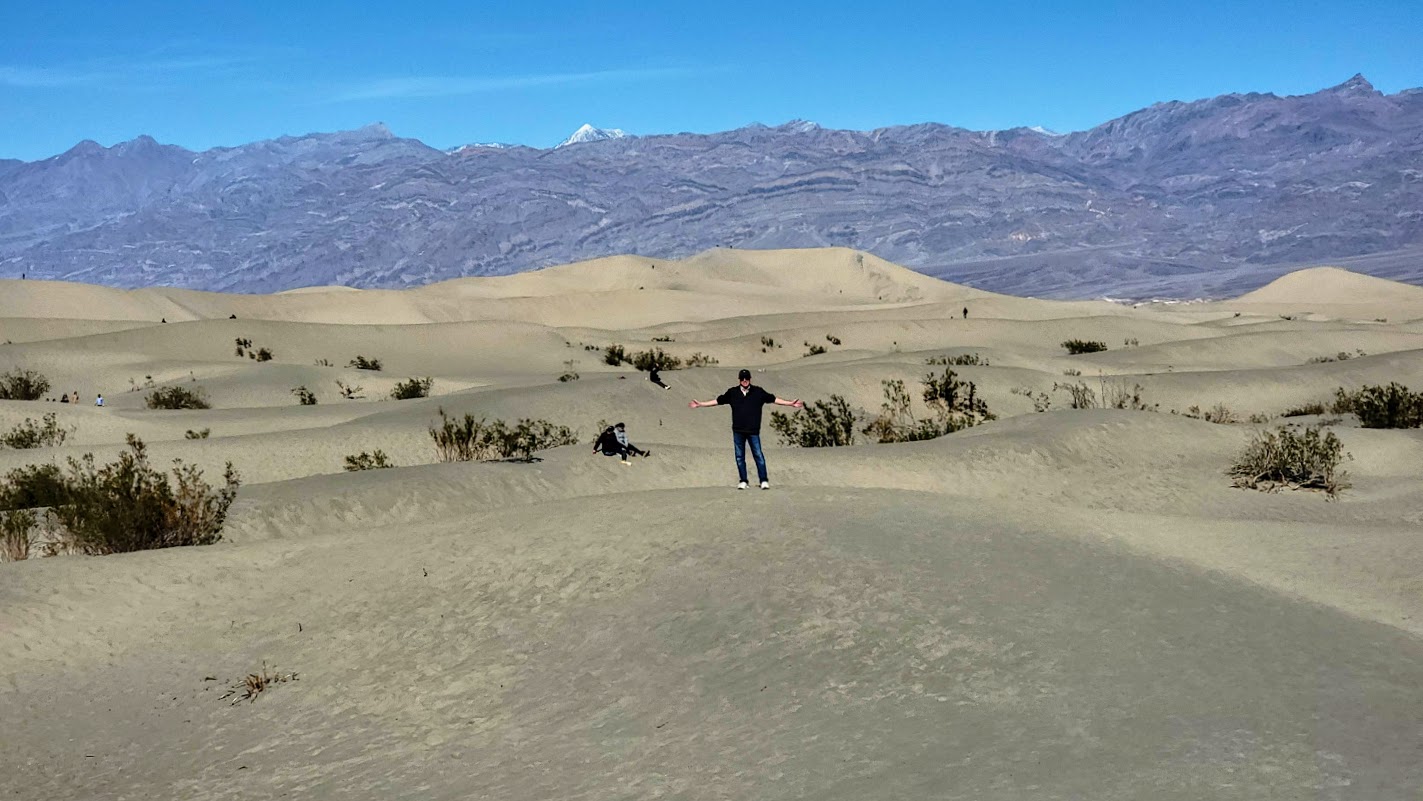 Occupying 14 square miles across the widest part of Death Valley, the highest dune here isn’t that tall, rising only about 100 feet (2 miles hike to get to it). Three types of dunes can be seen at this location:

This video by the National Park Service provides a lot of information about the Death Valley sand dunes.

Before we leave the dunes, we can’t forget the galaxy, far, far away! The Droid Dunes in Star Wars Episode IV – A New Hope were filmed at Mesquite Flat Sand Dunes. It was here where R2-D2 and C-3P0 found themselves lost amid the swirling sands of Tatooine.

And what’s the devil got to do with these dunes? Guess playing in the sand made the devil hungry so off to the Devil’s Corn Field he went! 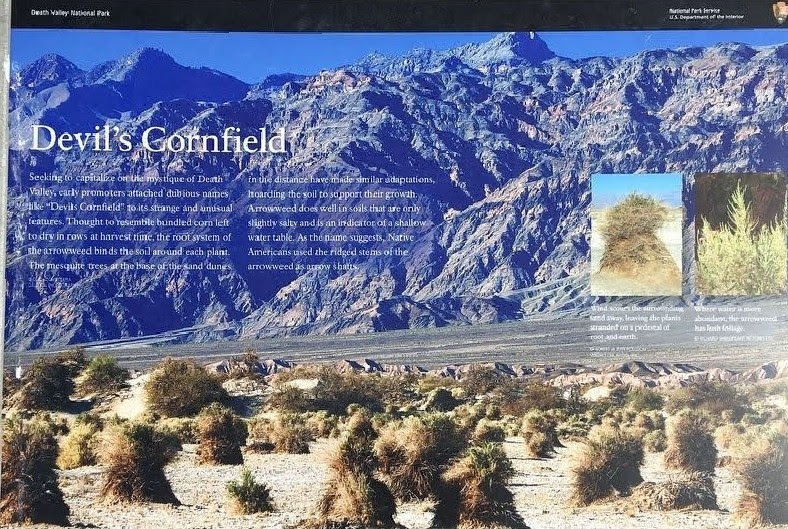 Located just 3 miles from Mesquite Flats Dunes (6 miles from Stovepipe Wells), this historic marker in the photo above reads:

Seeking to capitalize on the mystique of Death Valley, early promoters attached dubious names like “Devils Cornfield” to its strange and unusual features. Thought to resemble bundled corn left to dry in rows at harvest time, the root system of the arrowweed binds the soil around each plant. The mesquite trees at the base of the sand dunes in the distance have made similar adaptations, hoarding the soil to support their growth. Arrowweed does well in soils that are only slightly salty and is an indicator of a shallow water table. As the name suggests, Native Americans used the ridged stems of the arrowweed as arrow shafts. We spent a little (actually very little) time at Stovepipe Wells Village which has a hotel, restaurant, a general store and campground with 14 full hookup sites ($40) and 190 first come, first serve, no hookup sites, max length is 40′ ($14). Unfortunately we didn’t take any photos (tsk, tsk). Not sure why, maybe we weren’t impressed?

So now that our vision of sand dunes was satisfied, what’s next? No worries, there’s more! Stay tuned…..