Eroded badlands. Contrasting colors – shades of black and brown to the west, yellow, cream and white to the east.  A 2.7 mile unpaved, one way road along a dry wash and undulating hills. Welcome to 20 Mule Team Canyon! 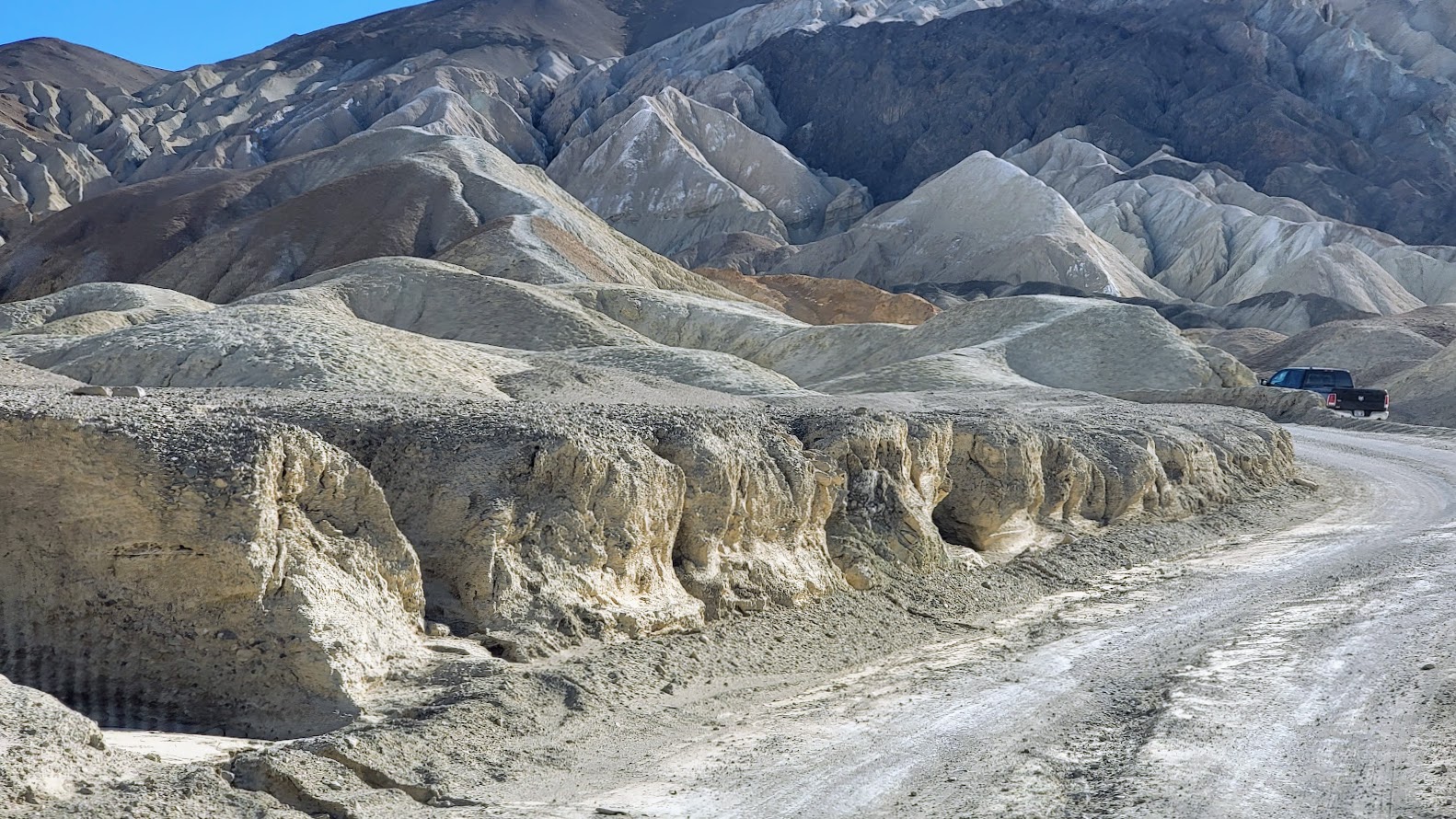 A drive that is easy today in our modern, technologically equipped vehicles but not so much for the beasts of burden back in the late 1800’s! 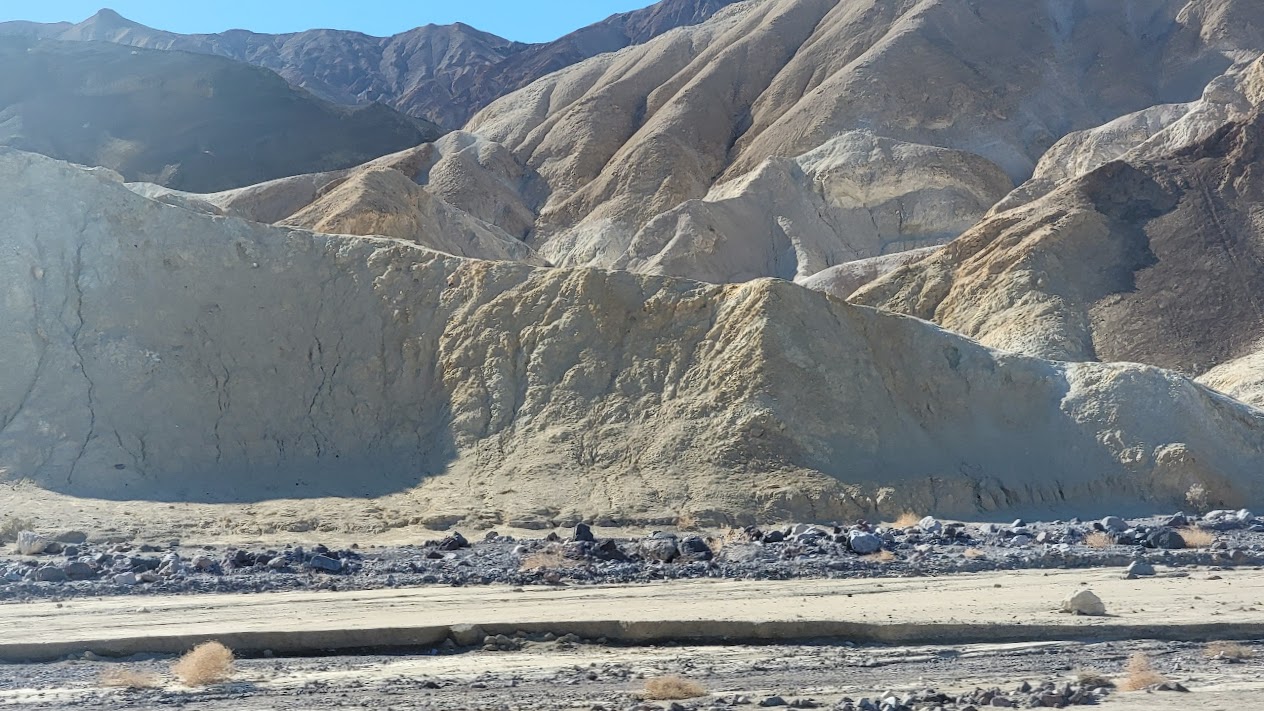 Hauling 10 tons of borax between Harmony Borax Works to Mojave, 165 miles away, the 20 Mule Teams became entrenched in the rich history of Death Valley and an iconic symbol not only in the US but internationally as well. For six years (except in the summer) from 1883 to 1889, they made the 10 day (one way) journey. More information about Borax and the 20 Mule Teams has been discussed in another post about our visits to the Borax Museum and the Harmony Borax Works ruins. 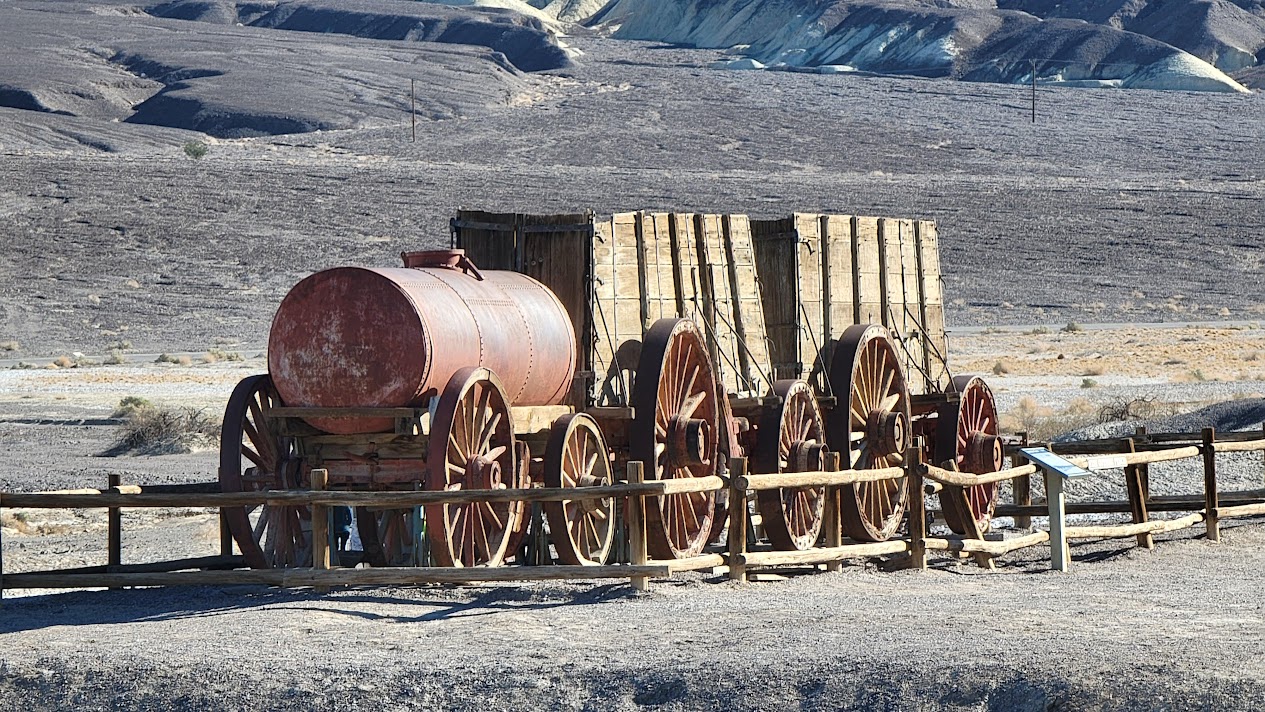 Check out this fascinating conversation on the National Park Service website with an actual muleskinner who describes what the job was like and explains, using a diagram, how the mule teams maneuvered sharp turns.

The train consisted of two wagons and a water tank wagon, 18 mules and 2 horses, stretching over 180 feet. The human team was made up of the muleskinner (he didn’t skin them, he drove them) who might earn a lofty $4/day and a swamper (responsible for un-harnessing the animals, gathering firewood, and cooking) who might earn $2 per day.

The two lead mules were 80′ ahead of the muleskinner linked together by an 80′ chain. Surprisingly each mule knew its role. The muleskinner felt that “a dumb mule (and I ain’t seen one yet) is a whole lot smarter than a smart horse.” They must be because they apparently knew to jump over the chain as they turned. To see how it works in action, watch this quick video that shows the Dance of the Mules in prep for their appearance in the Rose Bowl Parade in 2017.

And in the YouTube video below, there was a reenactment of their journey in 2021 in Furnace Creek. Even in 2021 on smooth asphalt and weighing considerably less, it wasn’t easy! Hard to imagine what it was like back in the day!

But anyway, back to our drive. The entrance to the one-way drive was about 5 miles south of Zabriskie Point on CA-190. At the end of the drive we exited back onto CA-190 about a mile further south. 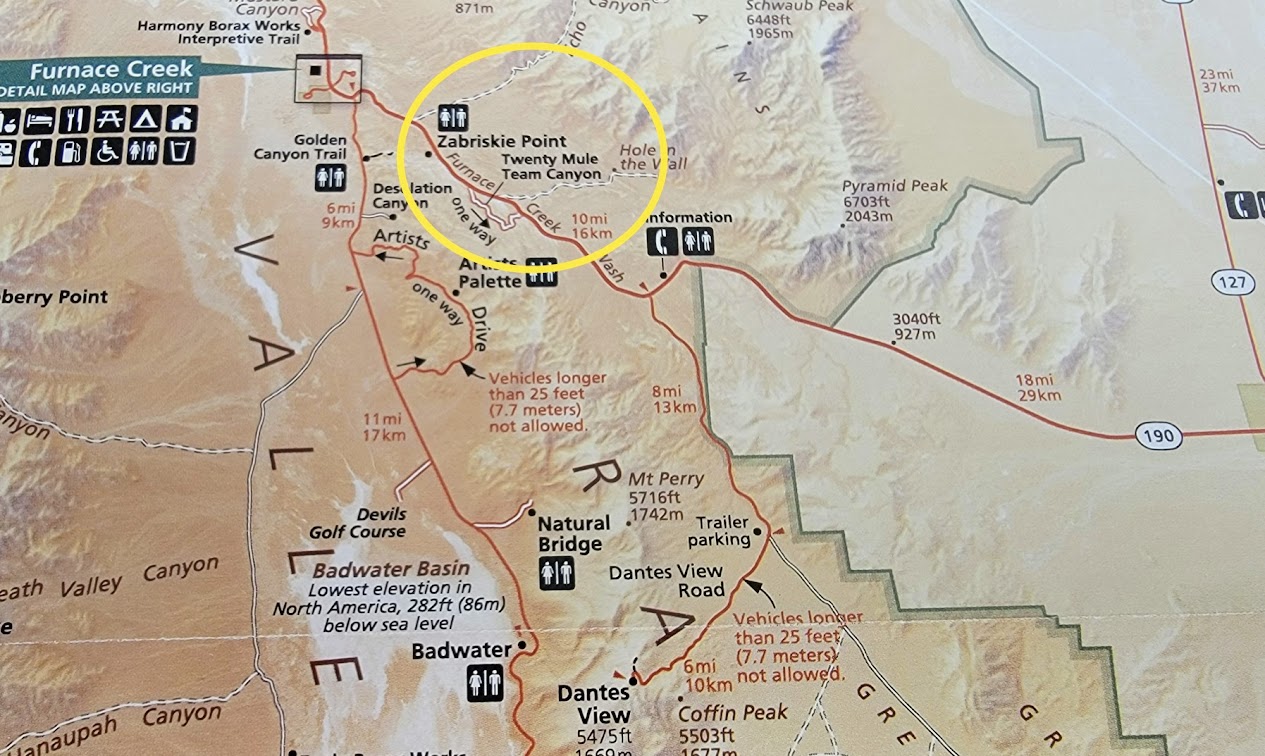 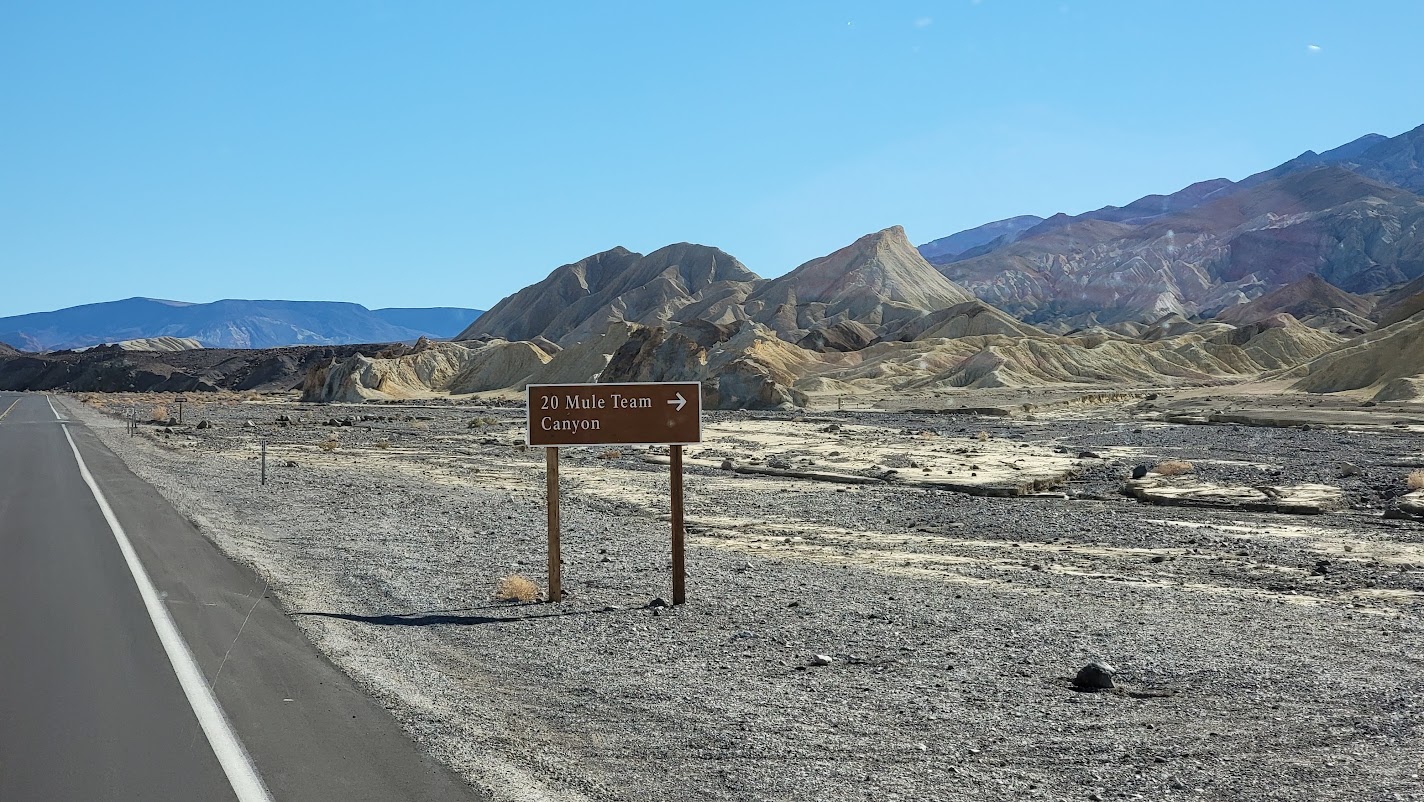 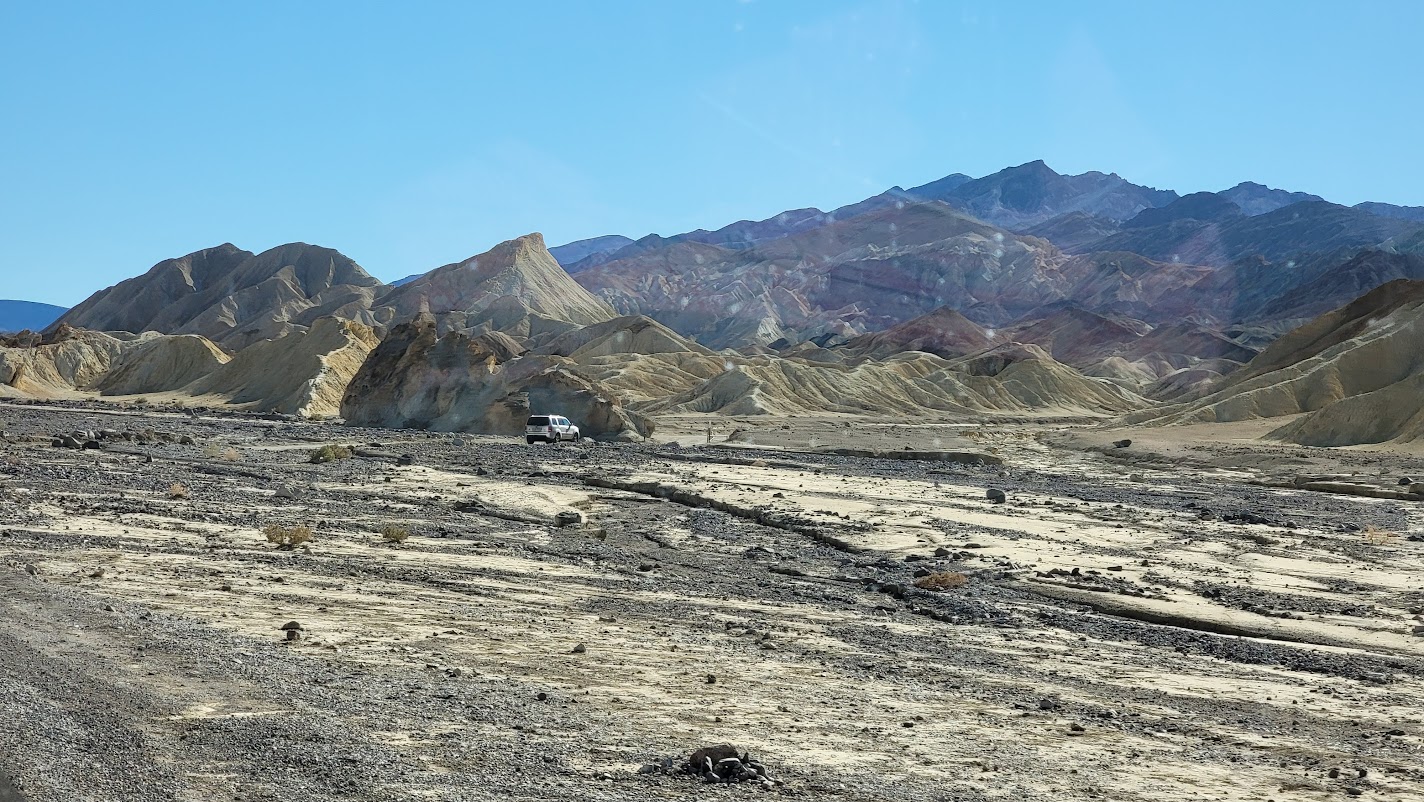 So buckle your seat belts and join us on our own out of this world experience! We enjoyed the drive so much we did it twice! On our first visit, I was very busy videoing the drive but not so on the second visit, I just sat back and enjoyed the ride!

From the days of the Old West to a galaxy far, far way! According to the National Park Service website:

Star Wars was filmed in the national park a few decades ago, when that type of filming was allowed. The vast majority of the filming which was done at that time is not permitted today in order to protect park wilderness.

Death Valley was the filming location for many movies and television shows over the years as shown on the National Park Service website. It appears that the last few were filmed in 1998.

More photos of our drive are available here.

The 20 Mule Teams may be gone but their legacy lingers on!