Leaving St. Augustine, we continued our journey northward on I-95, avoiding the traffic in Jacksonville by taking the I-295 bypass around the city. Our destination for a two night stay would be Crooked River State Park about 45 minutes north of Jacksonville. Named for its meandering course, Crooked River is 26.8-mile-long tidal river in Camden County in the state of Georgia and an inlet of Cumberland Sound. It is also part of the Intracoastal Waterway.

Having been to Georgia’s State Parks before, we knew that in some of the State Parks, you can not reserve a specific site, instead you typically reserve a site based on a category (i.e. sites 50′ and over), but the category specifics vary from park to park. Here at Crooked River SP there are two categories; 50′ Campsite and ADA 50′ Campsite.

This is a good system in one respect – if you decide to extend your stay and sites are available you won’t usually need to move to a different site because no one will be able to book your specific site. On the other hand it can create a stressful situation, because when you arrive you’ll need to drive around the park until you find a site you like. When the park is busy, like on a Friday afternoon, the competition heats up and trying to find a site that will work for you and your coach can become pretty stressful. If you have a big rig and arrive late in the day, there’s a good chance all the big rig friendly sites will be taken.

When we visited Crooked River certain sites were undergoing renovations, so only 26 water/electric sites (out of the normal 52 sites) were available, meaning there might be slim pickings.

Guess what day we were arriving at Crooked River? Of course, a Friday! Jeesh, poor planning on our part! But at least we were arriving early in the day so perhaps there would be a fairly good selection of sites available. Things seemed to be going well but then we had a slight snafu after we checked in and started our hunt for the perfect site. There was one pull thru site (#54) that we liked and was easy in and out, but it had a sign on it saying it was unavailable. When we stopped along the road to check out a few of the other sites a camp host came by and said that #54 was in fact available. We’ll take it!

After hooking up the utilities, getting everything set up and settling in, a few hours later the camp host came by, very apologetic – he had just been told that the site we were on actually wasn’t available and we would have to move. Grrrr! Moving from one site to another is always a pain! So much for finding a site early – by now it was 2 p.m. and a lot of the sites around us were now taken. But fortunately the people on the next pull thru (site #57) had left only an hour earlier and it was still unoccupied. So after packing everything up, we moved there. The next day a volunteer couple arrived and set up on site #54, so that’s why the site was marked as “unavailable”.

We were considering taking the ferry over to Cumberland Island, Georgia’s largest and southernmost barrier island, so once we were settled in, we decided to drive to St. Marys which is known as the Gateway to the Cumberland Island National Seashore to scope out the details.

As we drove towards town, to our surprise, at the intersection of GA-40 and St. Mary Road, rising from a sea of green grass was what looked to be a submarine. Huh? Did it lose it’s way and run aground while navigating St. Marys River?

No, of course not! Bordering the State Park is the 16,000 acre Kings Bay Naval Submarine Base which is the U.S. Atlantic Fleet’s home port for U.S. Navy Fleet ballistic missile nuclear submarines armed with Trident missile nuclear weapons. What we saw on the corner was the USS GEORGE BANCROFT Sail Exhibit, a display commemorating 100 years of the Navy’s submarine program. The Bancroft was named for the United States Secretary of the Navy (1845–1846) and the founder of the United States Naval Academy. 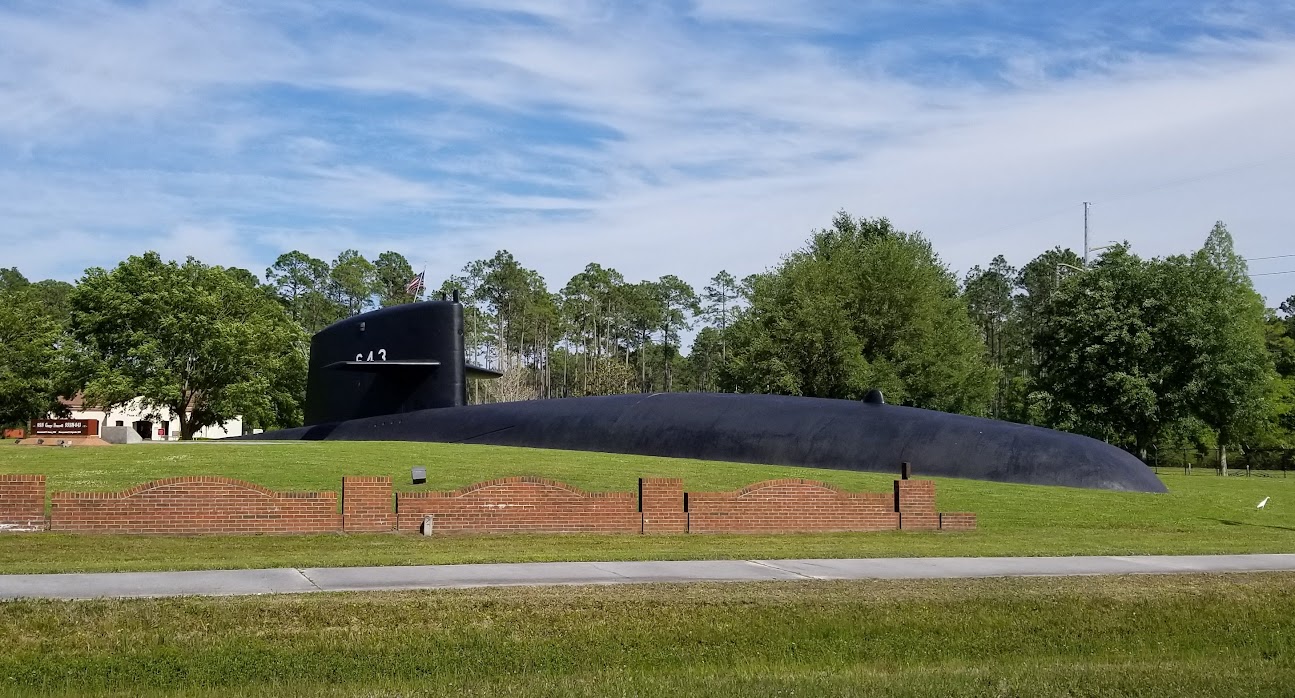 Although we didn’t stop, it was interesting to learn later that the sail (fin of the sub) was saved from the recycling bin in Washington and brought to Kings Bay in 1998. And even more interesting was that “from October 1999 to March 2000, members of Construction Battalion Unit 412 cleared and grubbed 500 tons of soil and trees to construct the footings, foundation, and lighting necessary for the exhibit. The Seabees molded the earth to resemble a submarine hull, allowing a contractor to then spray the earthen hull with a thick coat of black gunite.” Boy, could have fooled us! It looked so real we thought they had dug a gargantuan hole and had lowered an entire sub into the ground! Silly us! 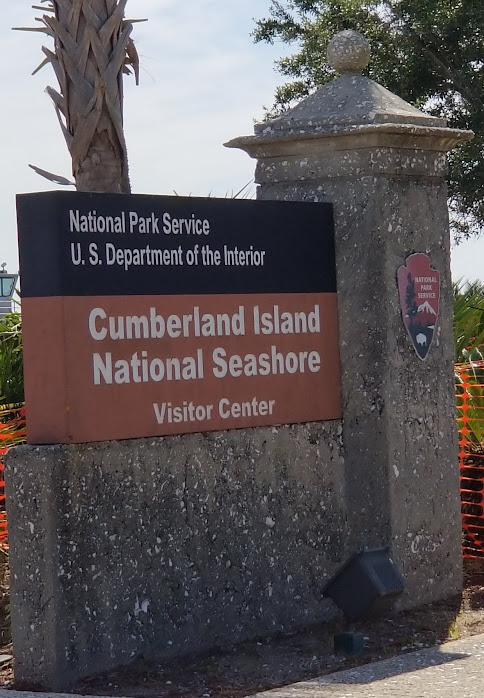 Once we arrived at St. Marys and the Visitor Center, we not only learned about the National Seashore but also the history of this quaint little town. Because explorers arrived here as early as the 1560s, it is considered one of America’s oldest continuously inhabited settlements. 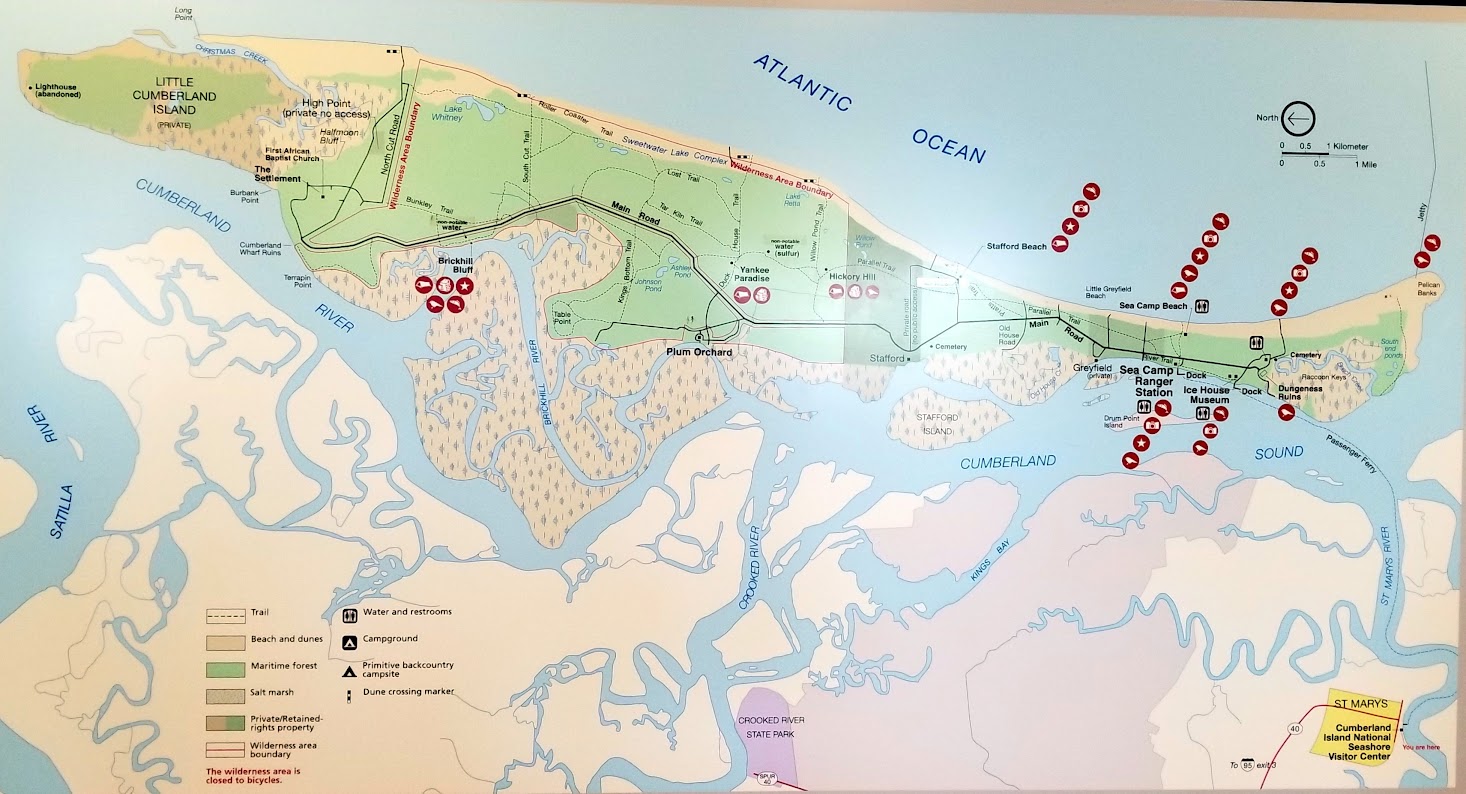 After much deliberation, we decided that a visit to Cumberland Island wasn’t going to make it to the top of our priority list at least on this trip, primarily because of our limited time in the area, the cost of the ferry and after our busy-ness in St. Augustine, we just didn’t feel like being on a schedule. Besides several of the places we wanted to see were at the far end of the island, not within walking or biking distance (not that you can take bikes on the ferry anyway), so there would be the additional expense of taking the Land and Legacies Tour ($45 per person) which was 5 to 6 hours in length. Oh well, maybe some other time we’ll see the 17 miles of beautiful beaches, the wild horses and visit the Plum Orchard Mansion and Dungeness Ruins on the island (both formerly owned by the Carnegie family) and the First African Baptist Church, a one room church established in 1893, rebuilt in the 1930’s and the site of the September 1996 wedding of John F. Kennedy, Jr. and Carolyn Bessette.

As an alternative, visitors can take a one hour tram tour of the Historic District of St. Marys Monday through Saturday at 11 a.m. and 2 p.m. The cost is $5.00 for adults and $3 for children 12 and under. Maximum seven people per tour. Unfortunately we didn’t do this either – the timing didn’t work out for us.

After we left the Visitor Center, we did our own tour of the town, stopping to read several historical markers. 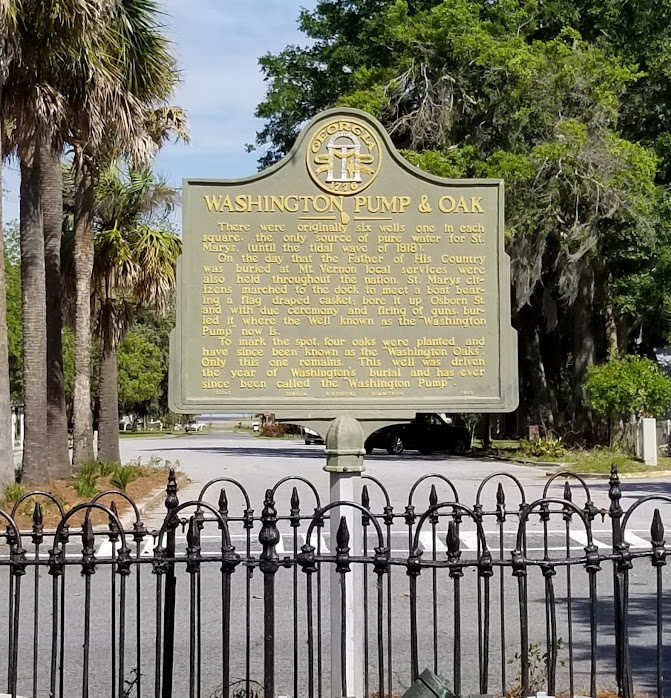 When researching the marker in the photo above titled “Washington Pump & Oak” I was surprised to learn that the town had a tie to one of the attractions we have been to in Boston – the USS Constitution:

“On the day in 1799 that George Washington was buried at Mount Vernon, the residents of St. Marys marched a flag-draped coffin down Osborne Street with great pageantry and buried the coffin at the corner of Conyers and Osborne Street. To mark the burial spot, four oak trees were planted. The last of the oak trees, known as the Washington Oak, was cut down in 1990, and the stump survives. Part of the wood from the Washington Oak went into the hull restoration of the USS Constitution.”

Another piece of history found along GA-40 practically across the street from the entrance to the Kings Bay Submarine Base was the Tabby Sugar Works of John Houston McIntosh. Built after the War of 1812 in the late 1820’s, these ruins are a fine example of tabby architecture which is a type of concrete made by burning oyster shells to create lime, then mixing it with water, sand, ash and broken oyster shells. 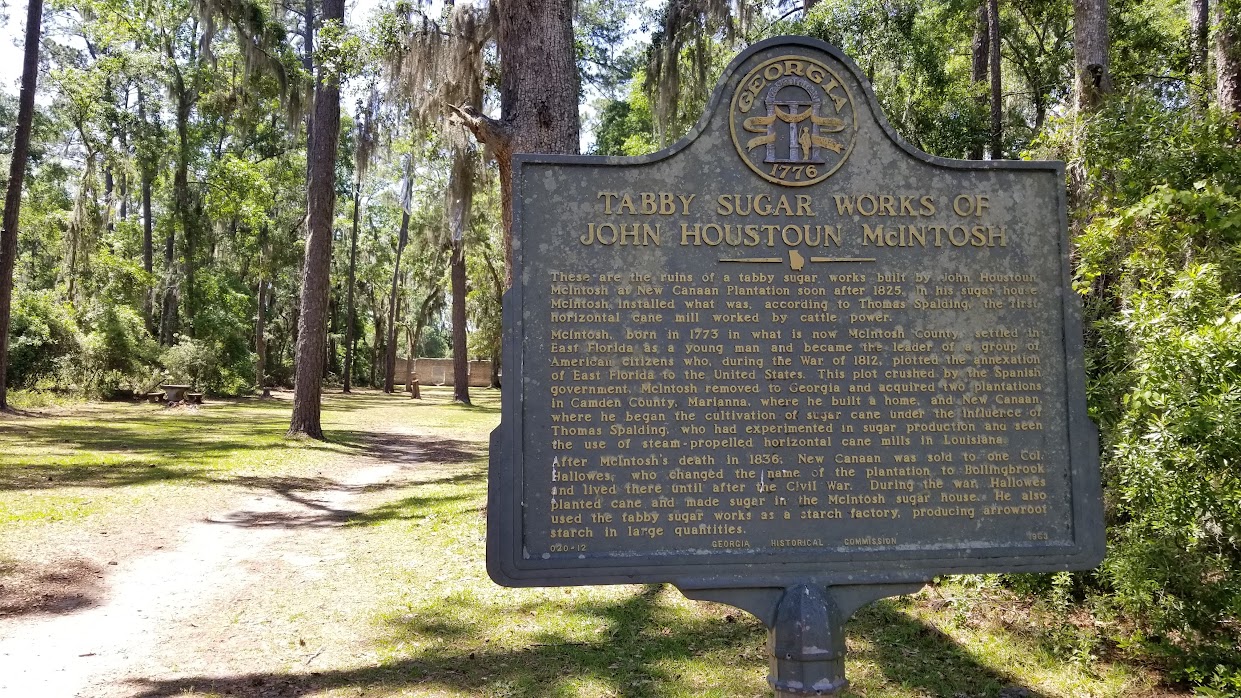 Since it’s hard to read in the photo, here is what is written on the historic marker:

These are the ruins of a tabby sugar works built by John Houston McIntosh at New Canaan Plantation soon after 1825.  In his sugar house McIntosh installed what was, according to Thomas Spalding, the first horizontal cane mill worked by cattle power. McIntosh, born in 1773 in what is now McIntosh County (Georgia), settled in East Florida as a young man and became the leader of a group of American citizens who, during the War of 1812, plotted the annexation of East Florida to the United States.This plot crushed by the Spanish government, McIntosh removed to Georgia and acquired two plantations in Camden County, Marianna, where he built a home, and New Canaan, where he began the cultivation of sugar cane under the influence of Thomas Spalding, who had experimented in sugar production and seen the use of steam-propelled horizontal cane mills in Louisiana. After McIntosh’s death in 1836, New Canaan was sold to one Col. Hallowes, who changed the name of the plantation to Bollingbrook and lived there until after the Civil War.  During the war, Hallowes planted cane and made sugar in the McIntosh sugar house. He also used the tabby sugar works as a starch factory, producing arrowroot starch in large quantities. 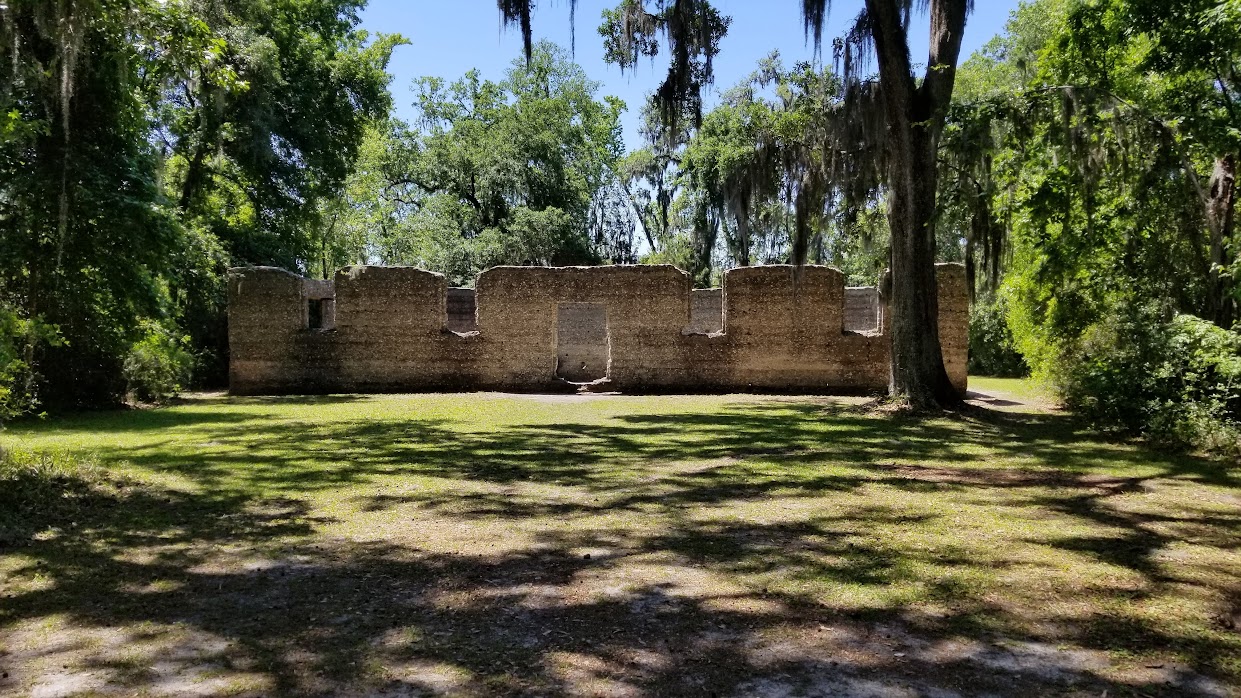 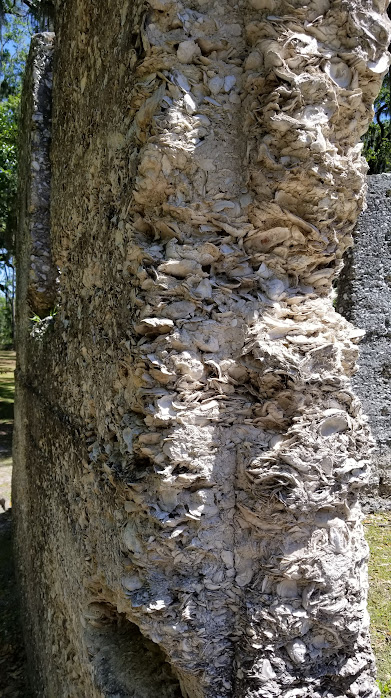 Even with our limited time here, we did have an opportunity to enjoy the State Park, hiking a few of the 4 miles of trails in the State Park. With its canopy of old growth hardwoods, a promise of views of the Crooked River and surrounding marsh and a birding platform, the Sempervirens Nature Trail which means “ever living” in Latin was the trail that appealed to us the most. Although the trail itself is listed as only .7 of a mile, it was much further for us since we had to walk from our campsite to the paved road, past a cluster of the State Park’s rentable cabins to the trailhead. 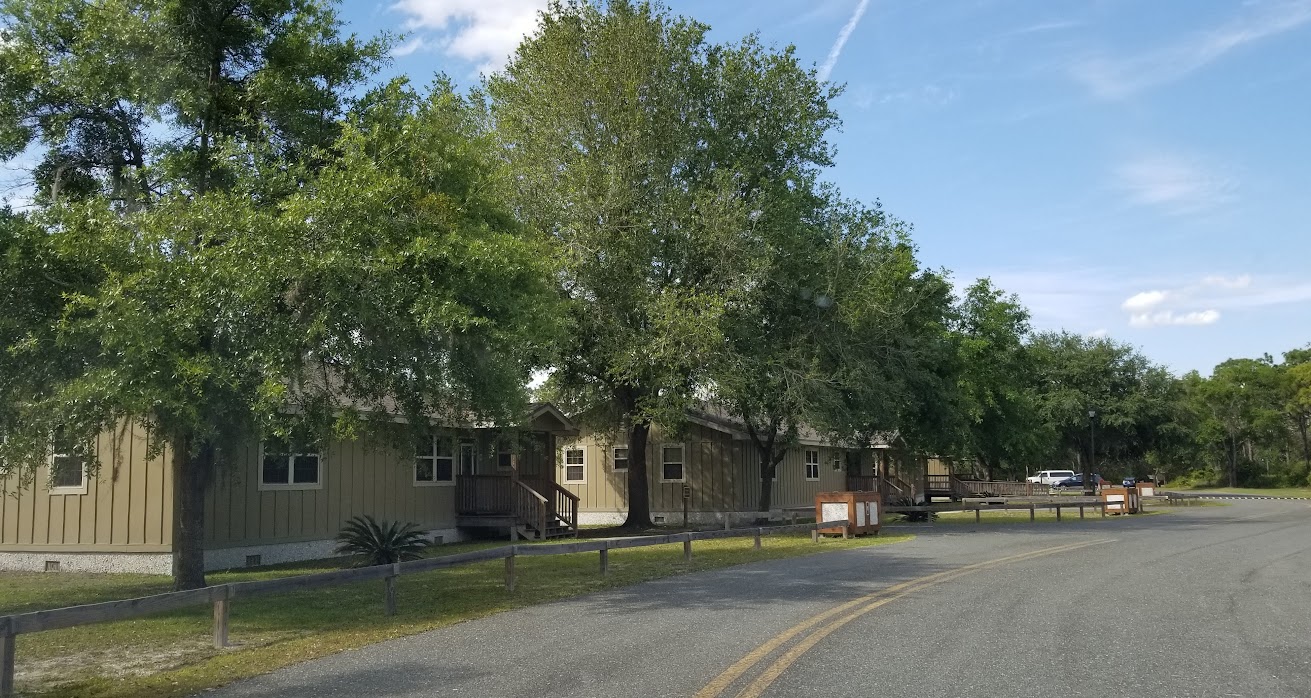 But once on the trail, it was a lovely walk. 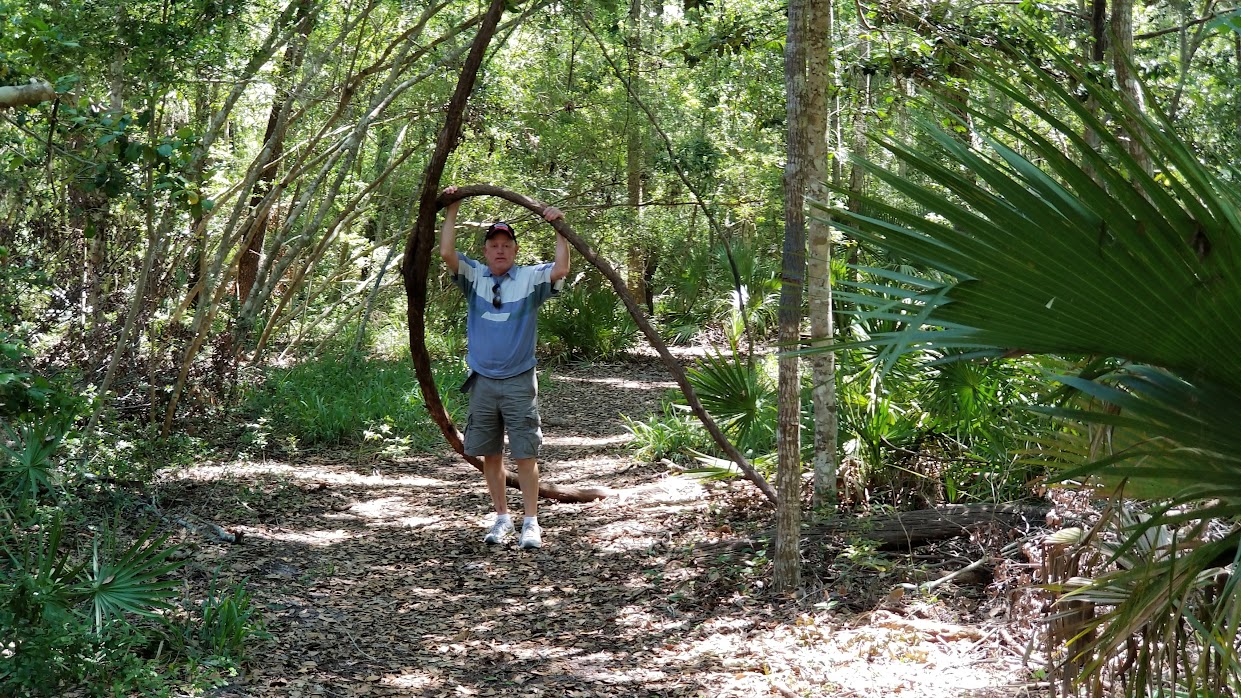 Initially the heavy canopy of trees blocked views of the river but eventually we were rewarded with views of it and the surrounding marshlands. A birding platform gave us a chance to rest while enjoying the beautiful views of the marsh. We had hoped to see a gopher tortoise, Georgia’s state reptile or some other wildlife or birds along the way but no such luck. 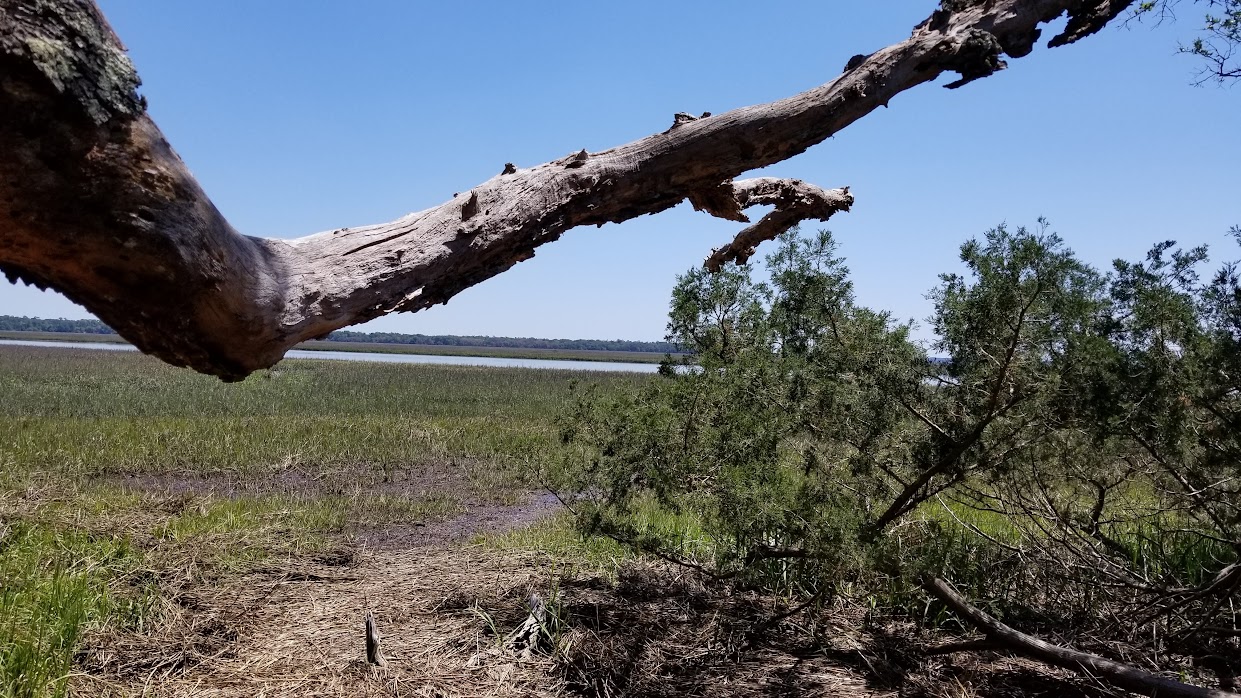 Believe it or not, the only wildlife (er, perhaps I should change that to the “not so wild”) we saw was back at the campground on a fellow camper’s shoulder! A Bearded Dragon! Certainly isn’t what I would want as a pet but that’s probably because I like cuddly creatures but it was interesting and unique to say the least! 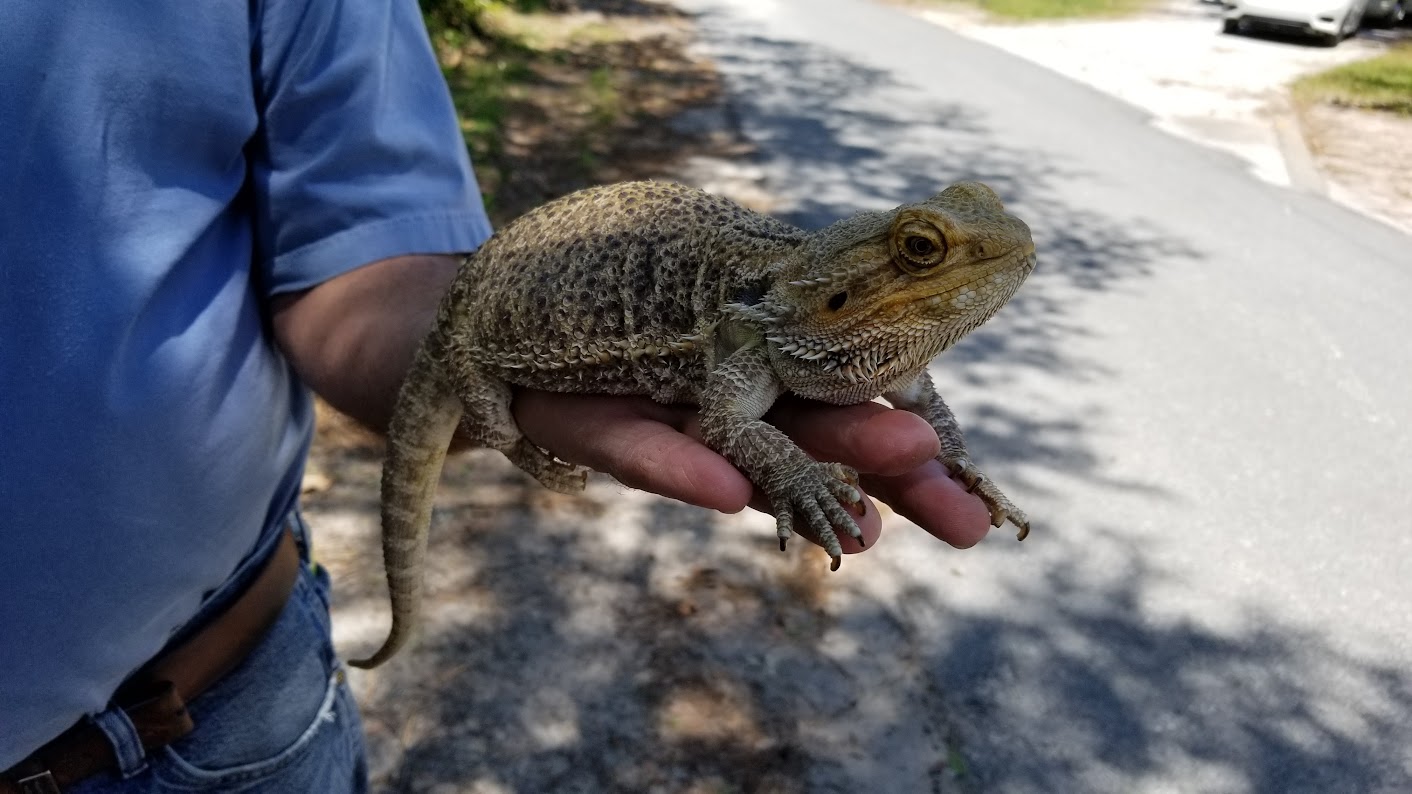 Finally it was time to leave Crooked River for our next destination. Where to next? We were headed to see the park bench (among other things) where Forrest Gump said “life was like a box of chocolates”.  Can you guess where we were going?