As mentioned in a previous post, our three day tickets for the City Sightseeing Tour on the Hop On Hop Off double decker bus entitled us to two free walking tours. Both tours are approximately 45 minutes and are available on a daily basis from 11:00 a.m. to 3:00 p.m. (tours begin on the hour) on a first come, first serve basis. Best to get there early as both tours have a limit of 28 people. Our three day ticket also included a self guided tour of the Lafayette Cemetery #1 but we’ll cover that in a different post.

This City Sightseeing Tour Map shows exactly where the French Quarter and the Garden District, are located.

Even after our two hour city tour sightseeing circuit on our first day, we were still looking forward to learning more about this awesome city. The timing worked out perfectly as we were able to catch the 1:00 p.m. French Quarter walking tour which met in front of the ticket office across the street from Jackson Square. 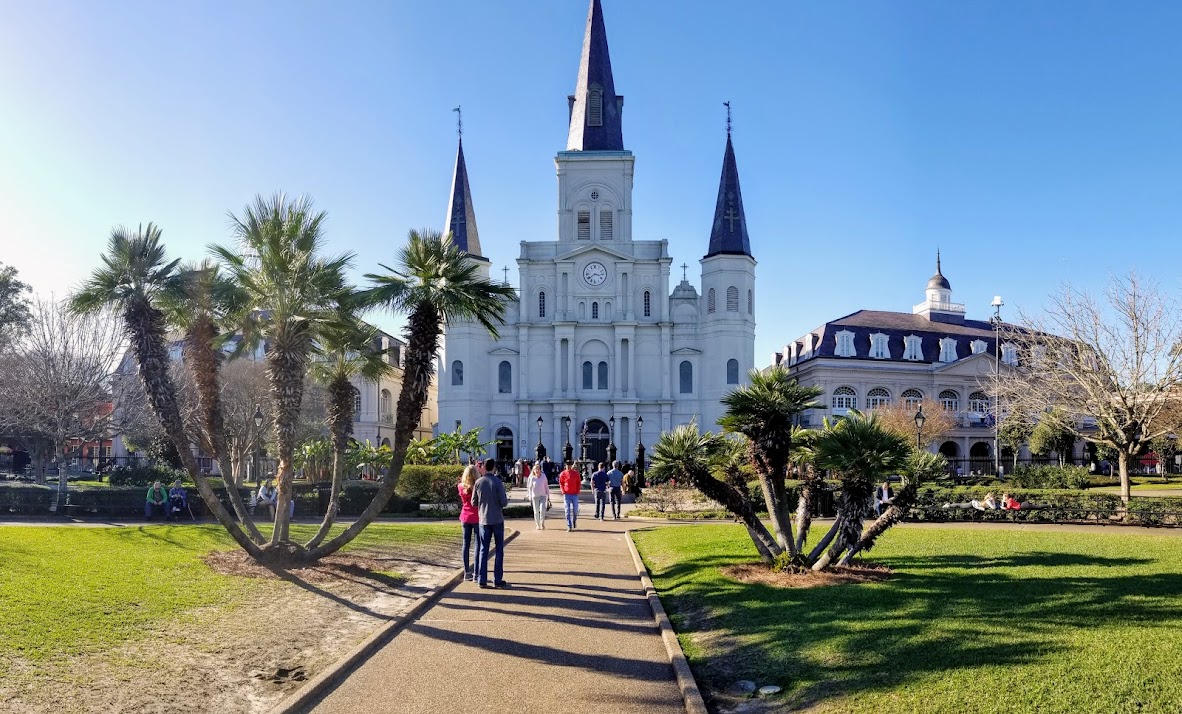 Sparkle, a charming older woman was our tour guide. Having lived in New Orleans all her life, she was very knowledgeable about the history and culture of the city. 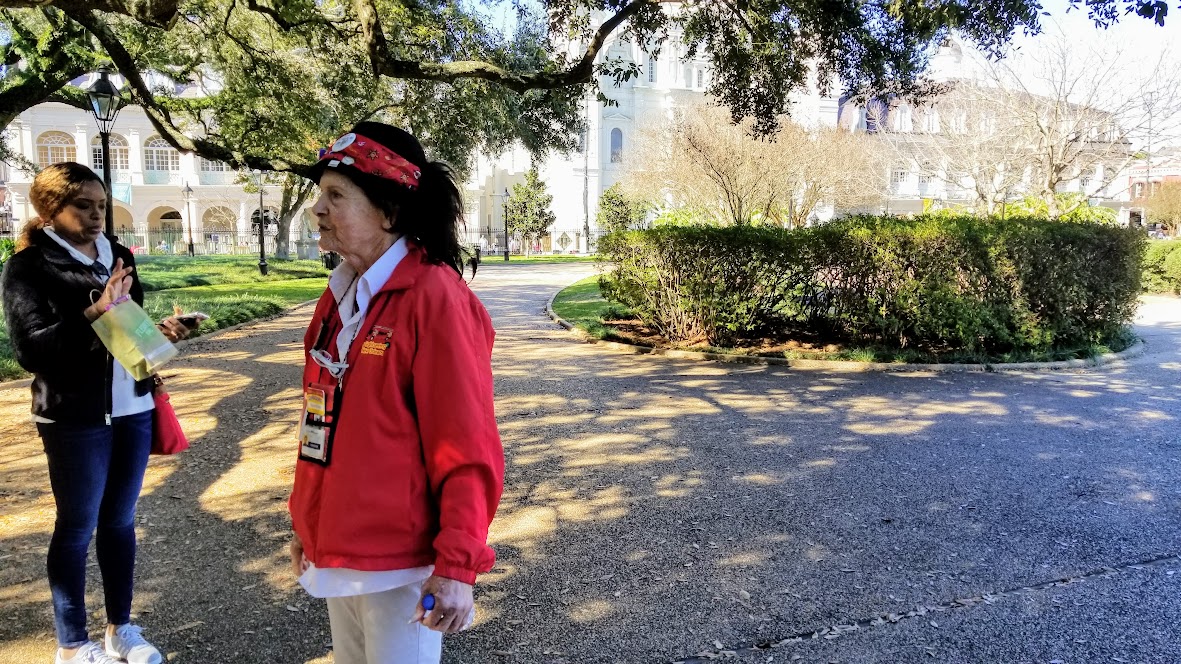 Here are some of the facts we learned: 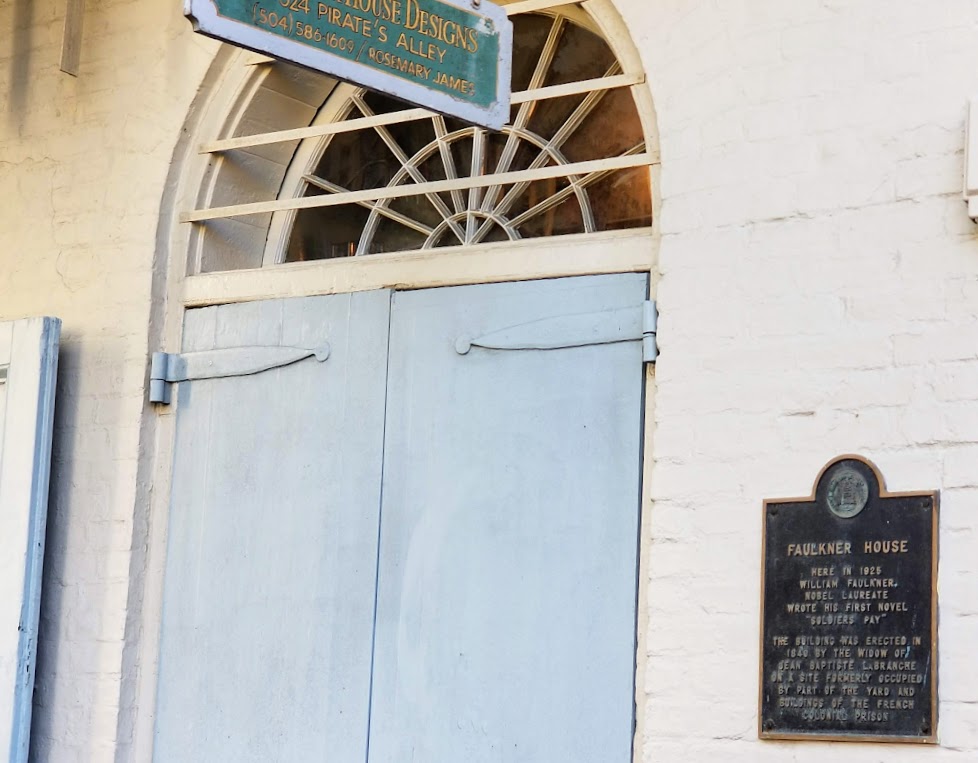 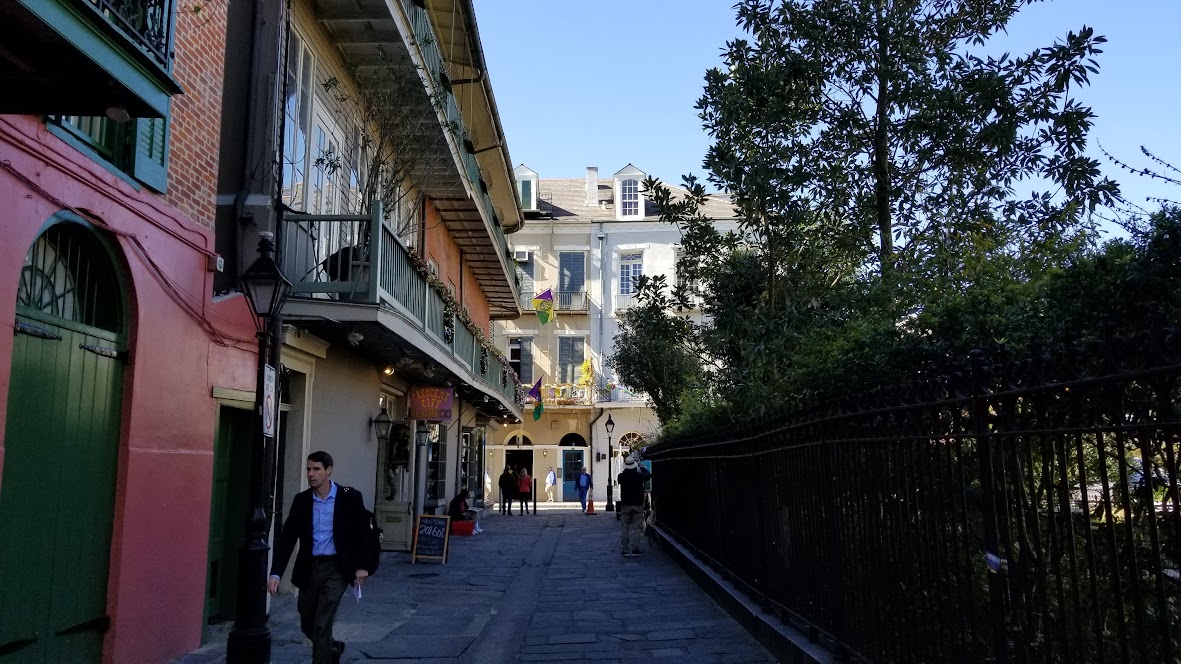 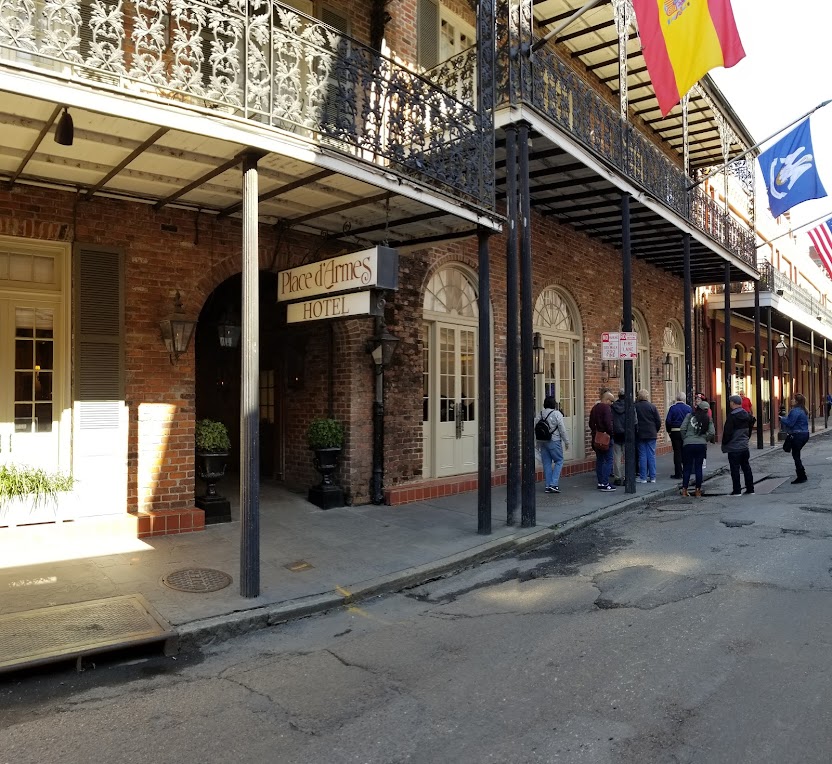 All too soon the tour was over. Although it was very informative and interesting, we were glad it was included in our tour tickets. If we had paid $40 ($20 per person) for the tour I think we would have been disappointed! Perhaps $10 would be a more realistic price.

On Thursday, we arrived at Stop #12 on Magazine Street in time for the 2:00 p.m. tour. Paige would be our guide.

At our first stop she told us about the the history of the Garden District and how it was once only populated with a few plantations. But parcels of the land surrounding the plantations were sold off to wealthy Americans who wanted to live outside of the French Quarter and away from the Creoles. In 1833, the area officially became part of the City of Lafayette. Nearly 20 years later, in 1852, it became part of New Orleans.

The area got its name because there were only a couple of houses per block, each surrounded by a large garden. Then in the late 19th century, as uptown New Orleans became more urban, some of these large lots were subdivided, gardens were less prevalent.The district became known more for its architecture than its gardens. In fact, today the area has one of the best-preserved collections of historic mansions in the Southern United States.

As we walked along, Paige pointed out the various styles of architecture: Greek Revival, Italianate, Gothic, Georgian, Swiss Chalet, Queen Anne to name a few. 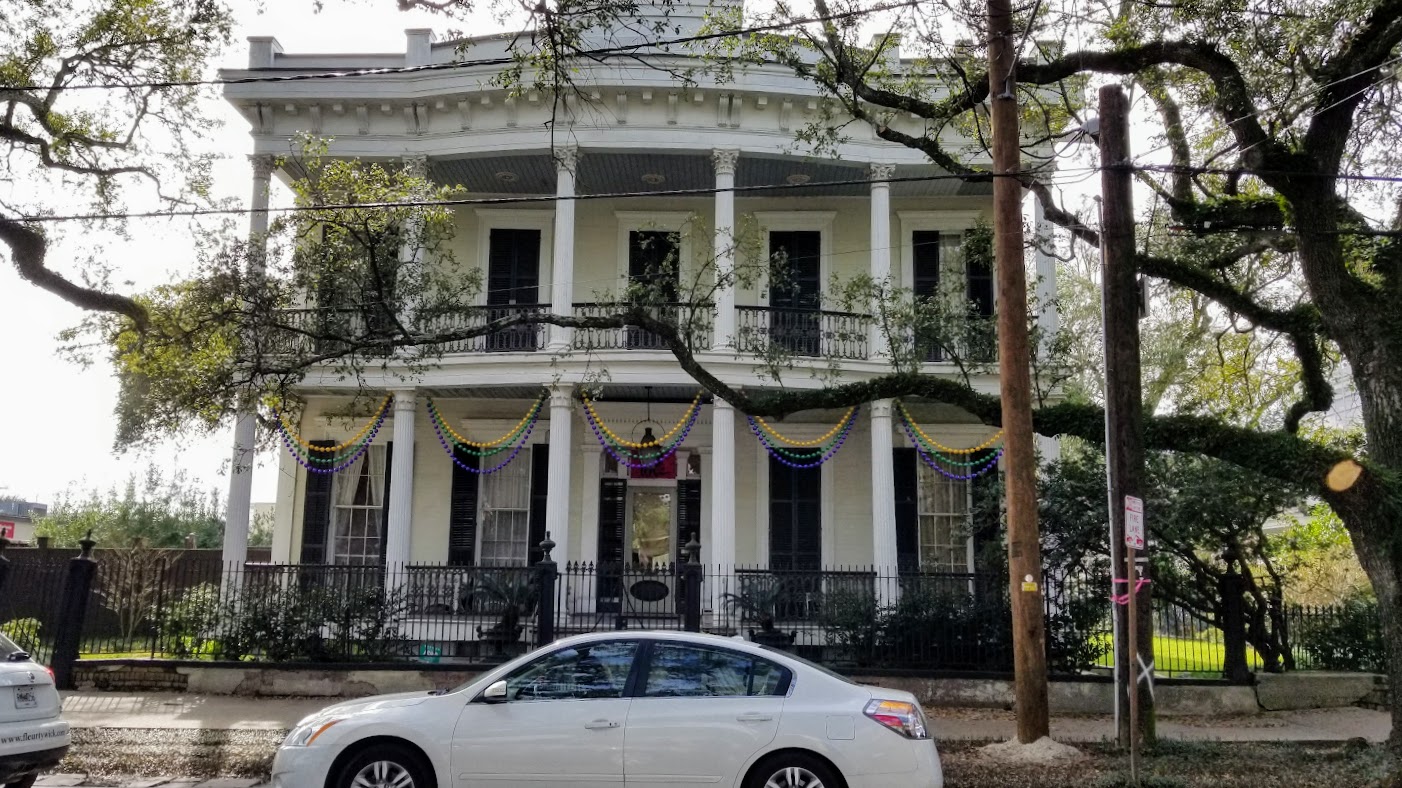 But scattered in between these ornate historic homes were a few funky, modern homes, even some condos. Today if you want to build a modern home here, forget it! Once the district was declared a National Historic Landmark in 1974, any one wishing to build or modify property needs to obtain approval first.

As we approached the corner of Washington Ave and Coliseum Street, we were surprised to see a turquoise and white striped building in front of us. Yikes, did that stand out like a sore thumb! 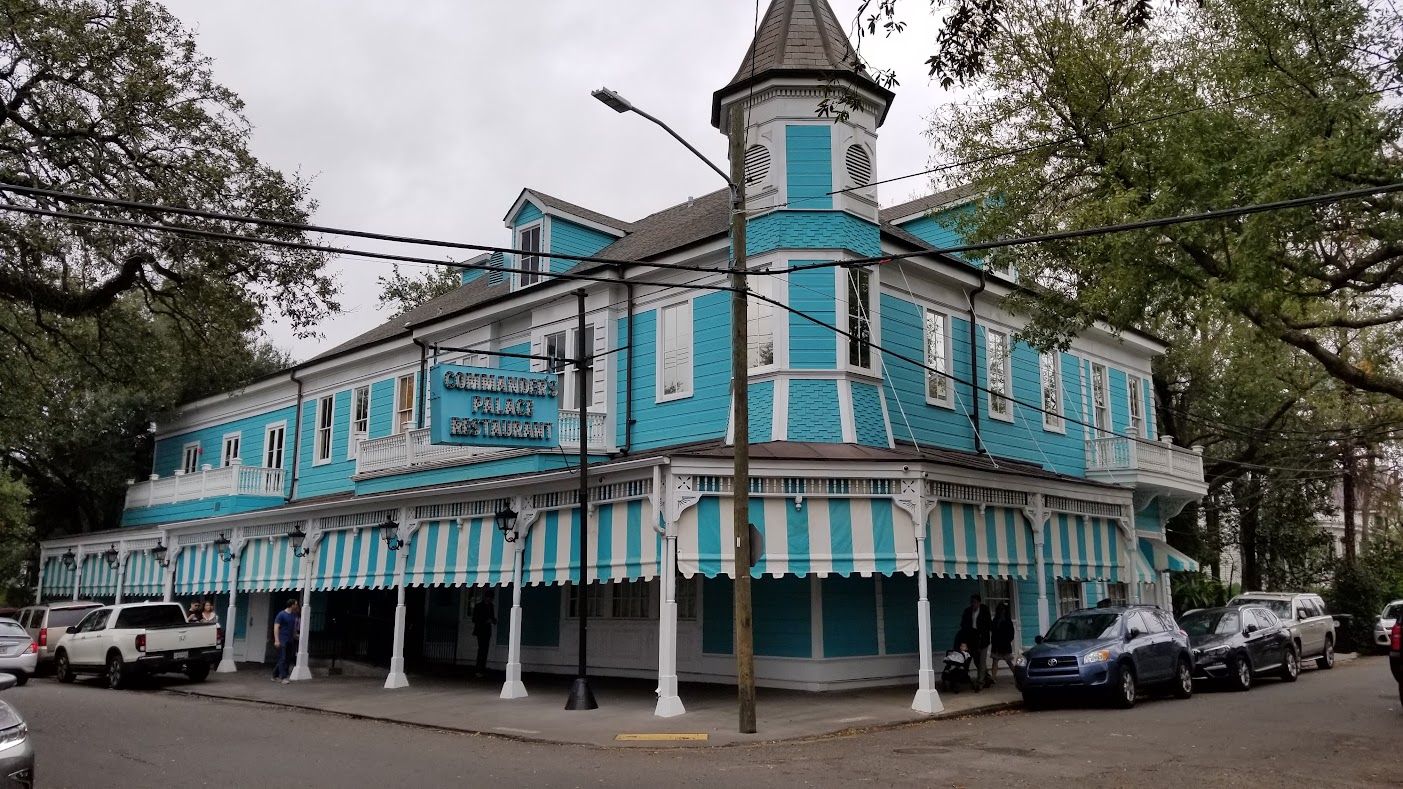 Commander’s Palace Restaurant has been a landmark in the Garden District since 1893 when it was erected for Emil Commander to be run as a restaurant. It has been owned by the Brennan family, some of New Orleans’ foremost restaurateurs, since 1974. Noted for its Haute Creole cuisine, whimsical Louisiana charm and 25 cent martini lunches (not to worry, 3 is the limit), this restaurant is a culinary legend having been the winner of seven James Beard Foundation Awards. Paige explained that a young man started his culinary career here – his name, Emeril Lagasse! We considered splurging and having lunch there the next day but when we discovered they had a dress code that quickly squashed that idea! Guess our dislike of dressing up outweighed our desire for a gourmet meal!

Remember the 2008 movie, The Curious Case of Benjamin Button which stars Brad Pitt as a man who ages in reverse and Cate Blanchette who is his love interest? If you do, you might be interested in seeing the home where Benjamin Button was raised. It was built in 1832 and is located just a short distance from Commander’s Palace on Coliseum Street. 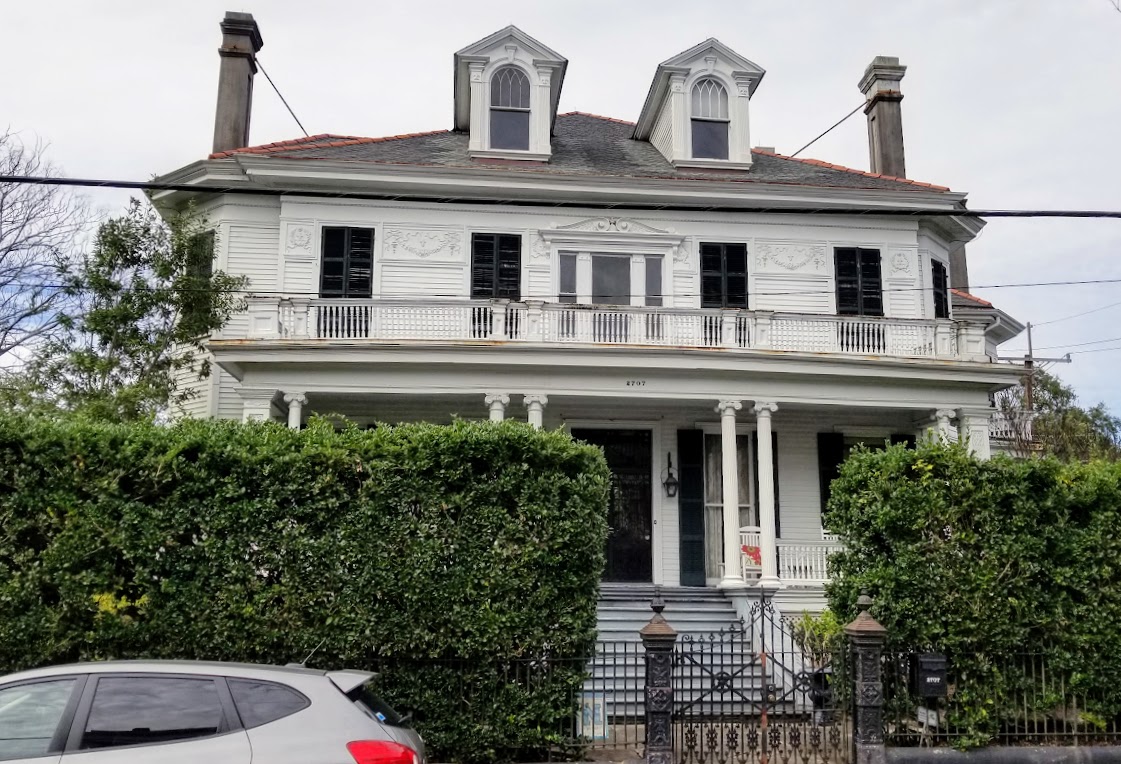 But that wasn’t the only home here with connections to celebrities! As we continued our stroll down Coliseum Street, we stopped in front of another home that looked a little out of place because of its unusual architecture. Designed by Architect William Freret and built in 1867 for the onetime U.S. Senator, James Eustis, this Swiss Germanic Chalet is now owned by Oscar winning actress, Sandra Bullock. Miss Bullock bought the home in late 2009 for a supposed $2.25 million. Since she adopted her two children, she rarely spends any time in New Orleans but we were told that she does let other celebs stay here so who knows who might be coming out the front door when you walk by! 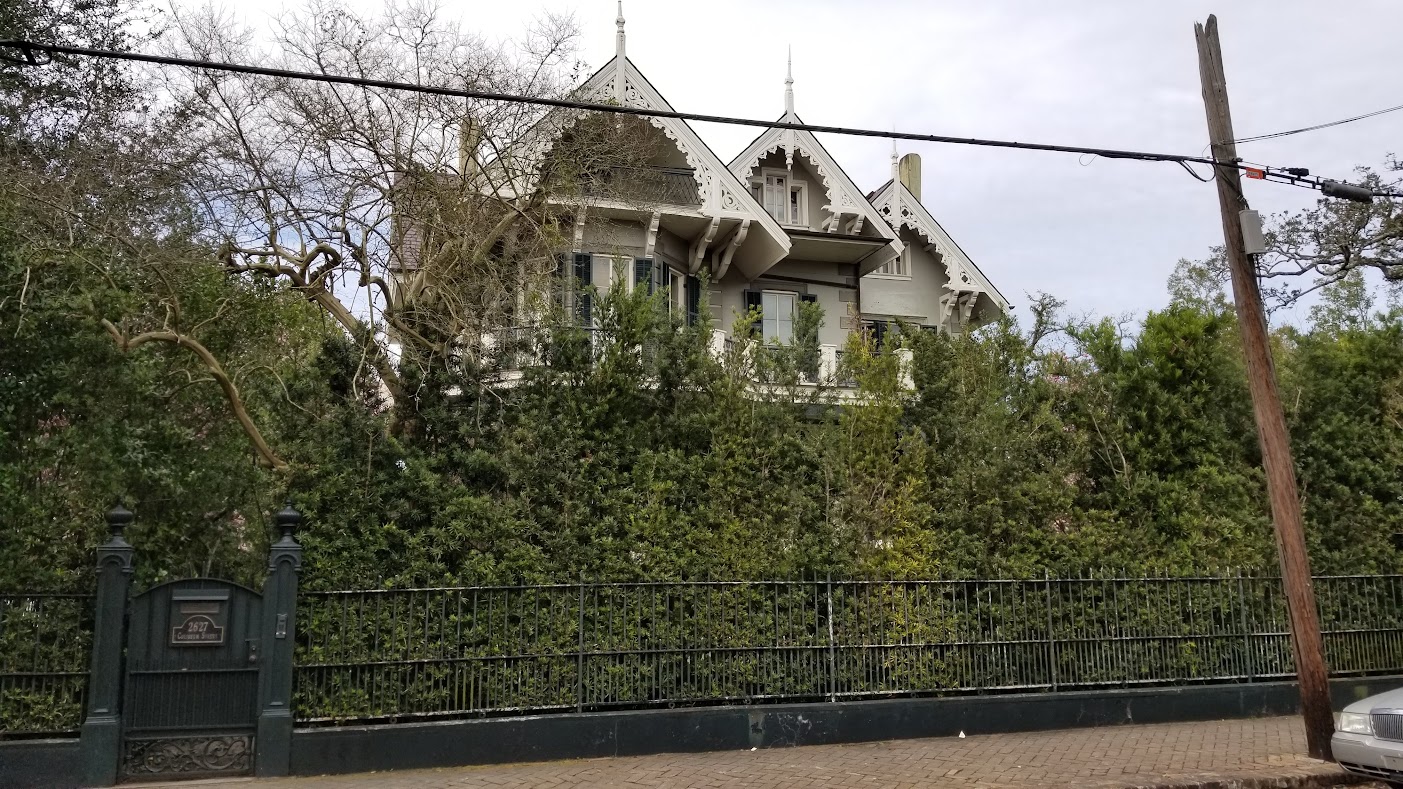 Located a few blocks from Bullock’s home was the Joseph Merrick Jones House. According to Paige, this home once belonged to Trent Reznor, an American singer, songwriter, musician, record producer, film score composer and founder and primary singer of Nine Inch Nails. Paige explained that the woman next door who happened to be Councilwoman Peggy Wilson wasn’t too happy when a musician moved in next door. Each time he picked up his guitar, she would call the cops and lodge a complaint. New anti-noise ordinances were introduced at city council, gee, isn’t that a coincidence! Tired of being harassed, he eventually put the house up for sale. Today it is the home of actor John Goodman and his wife. 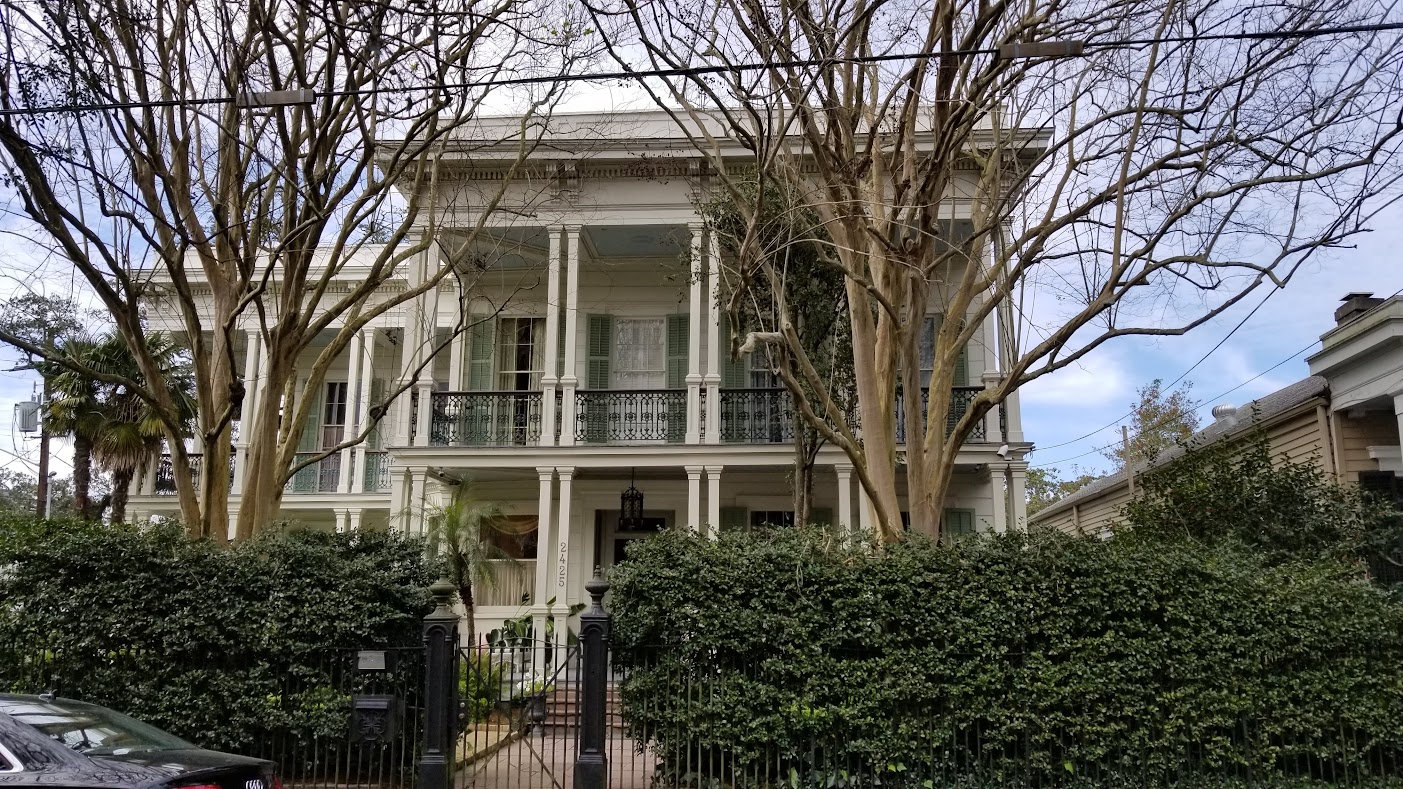 While we were standing across the street listening to Paige, a car pulled up and parked across the street from the house. The gentleman who got out of the car was the spitting image of Mr. Goodman, perhaps it was his brother, Leslie. He waved to us while walking over to the gate where he used the intercom to contact someone inside.  A short time later, the door to the house opened and out stepped John Goodman who also waved to us. Even though we are not celebrity hounds, that was kind of cool!

Although it wasn’t part of the walking tour, Paige mentioned that not too far from the Goodman home was the Manning home owned by football quarterback, Archie Manning who played for the Saints from 1971 to 1982. Sons Peyton, Eli and Cooper were raised in this home.

Last but not least was one of the largest historic homes in the Garden District at 12,000 square feet, the Walter Grinnan Robinson home which was built by New Orleans’ most famous architect Henry Howard between 1859 and 1865. The galleries of the Italian-style villa are supported with Doric columns on the first floor and Corinthian columns on the second and features a distinctive curved portico. This mansion was one of the first in the Garden District to have 15-foot-high ceilings and the 1st in New Orleans to have indoor plumbing, thanks to a water collection roof design. 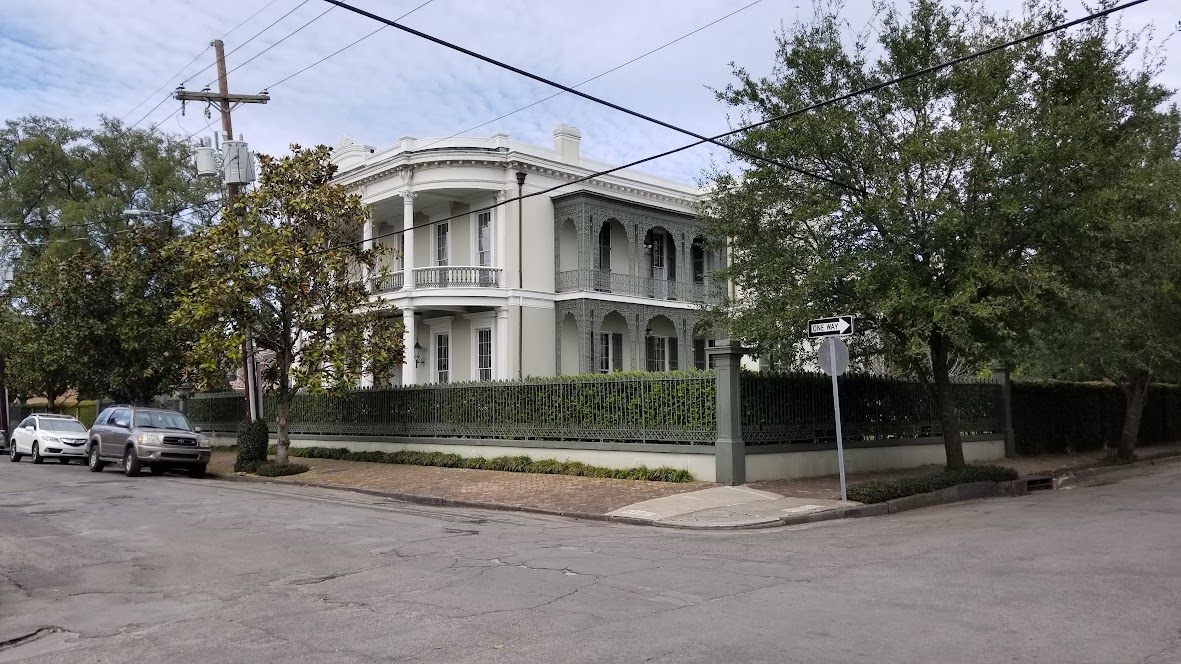 Great tour! Not sure why but this one in our opinion seemed better and probably worth the $20 per person cost than the French Quarter tour. Both tours were interesting but perhaps it is the personality of the tour guide that makes the difference.

After walking around for a bit more, we finally made our way back to the bus stop and returned to the French Quarter, then back to Pontchartrain Landing.  Stay tuned there is even more sightseeing to come!