To be honest, whenever anyone mentioned Mardi Gras to us prior to this visit, what usually popped into our heads were images of parades, floats, beads, king cake, partying, rowdiness and of course, Bourbon Street. We really didn’t know much about the celebration – our knowledge of it was limited to a few annual quick snippets on TV and usually those short clips only showed the huge crowds, the rowdy parades, lots of drinking and women flashing for beads. Our previous visits to the Big Easy were well after the carnival season so there wasn’t a lot of hype about it and being in New Orleans during Mardi Gras hasn’t ever been on our bucket list. 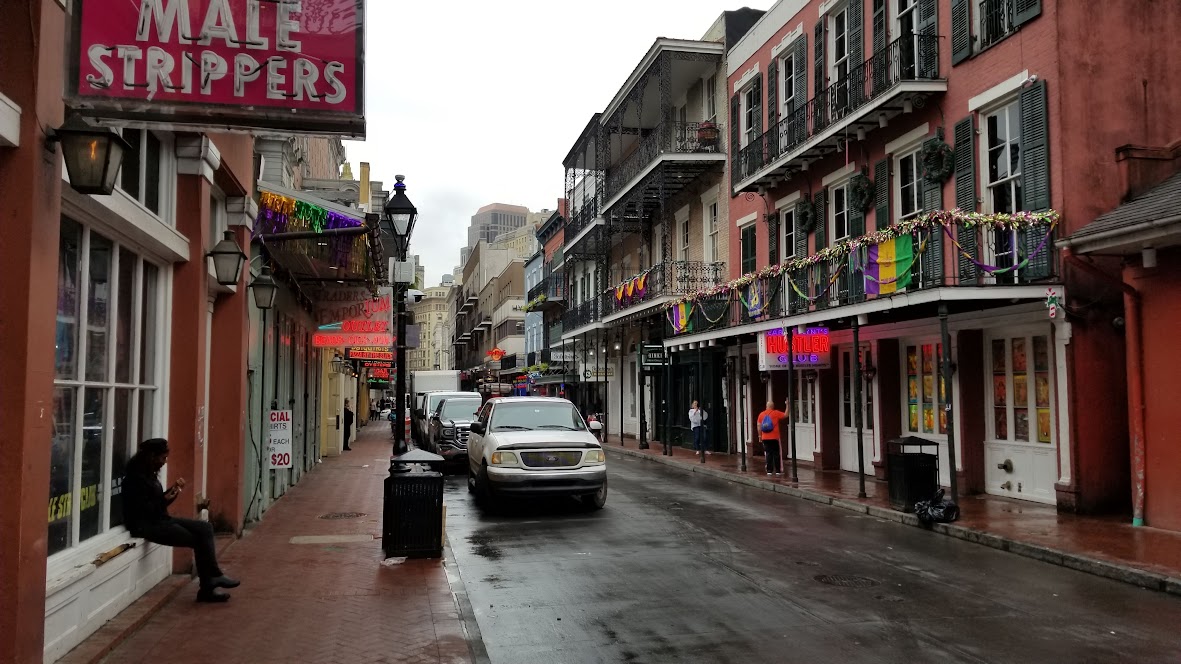 But things were different on this visit – Carnival was already in full swing, Fat Tuesday was less than a month away and the city was ready to “laissez les bons temps rouler” or “let the good times roll!”

Several of our sightseeing tour guides (all native New Orleanians) quickly corrected our misconception stating that the naughty behavior is not typical and is not condoned – it only occurs on Bourbon Street, an area known for its strip joints. Watching TV coverage of the parades after we left Pontchartrain Landing, it became really obvious that the “real” Mardi Gras is nothing like what is hyped in the media and is truly a family affair.

Another misconception we had was that Mardi Gras is just a one day event, but it is actually much more than that.  Even though the name itself is French for “Fat Tuesday”, it actually refers to events of the Carnival celebration, beginning on or after the Christian feasts of the Epiphany (traditional date for the feast is January 6) and culminating on the day before Ash Wednesday. Each year Fat Tuesday is on a different date, depending on when Easter is. In 2018 it was on February 13th; in 2019, it was on Tuesday, March 5th; in 2020 it will be on February 25th. Mardi Gras can be traced back to medieval Europe in the 17th and 18th centuries so it has a long history which is summarized on this website.

As we rode through the streets on the bus, everything was decorated in the Carnival colors of purple, green and gold – houses, stores, businesses, bridges, gates, people and even dogs were all decked out. 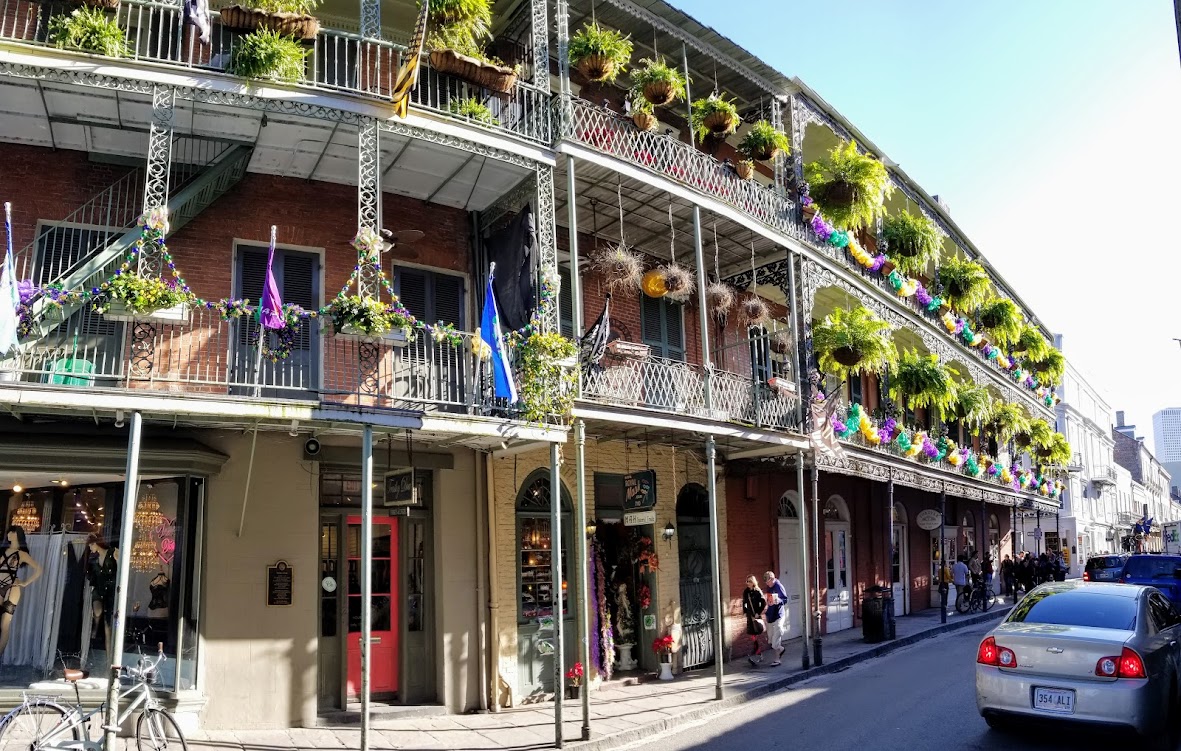 So why those colors we wondered?  In 1872 purple, gold and green were designated as Carnival’s official colors by the first King of Carnival, Rex, when he presided over the first daytime parade. He chose these colors because they were the family colors of the visiting Russian Grand Duke Alexis Romanoff. Purple stands for justice, green for faith and gold for power. When tossing beads, the idea was to toss the color to the person who exhibited the color’s meaning. Not sure if that holds true today!  The Krewe of Rex is one of the oldest participating groups in Mardi Gras.

Speaking of beads, Dan Kelly, the president of Beads by the Dozen, one of New Orleans’ biggest Carnival throw providers, said that for Mardi Gras 2018, “roughly 125 shipping containers of beads and baubles made their way from China to the Crescent City. Each 40-foot container carried something like 42,000 pounds of plastic treasure bound for outstretched hands. Each container load of throws, Kelly said, costs between $40,000 and $50,000 to bring in.” Yikes, that’s a lot of beads!

This interesting website which has all sorts of info about Mardi Gras claims that “roughly 12,500 tons of beads are thrown from floats each year”. But if you, like us, think that what is thrown is limited to just beads, you would be so wrong! Trinkets, toys, gold doubloons, painted coconuts, flower beads, Orpheus masks, dolls, hats, decorated sunglasses, and rubber chickens were among some of the krewe throws this year. Boy, pity the people who have to clean the streets after the parades! The good news is that there are organizations that do recycle these beads.

Over the years, krewes were formed as private social clubs with restrictive membership policies. Because the krewes fund the parades (there are no corporate sponsors allowed), Mardi Gras is called the “Greatest Free Show on Earth!” Today the list of krewes is quite extensive, each with its own history, theme, and parade route. One of our tour guides on the sightseeing bus told us that she was invited to join one of the krewes, paying a $1000 membership fee which entitles a member to ride in the parade on one of the krewe’s floats and attend the ball and other events throughout the year.

On Thursday morning, we parked near Cafe du Monde once again, then walked a few blocks to the Original Pierre Maspero’s restaurant on Chartres Street for breakfast. 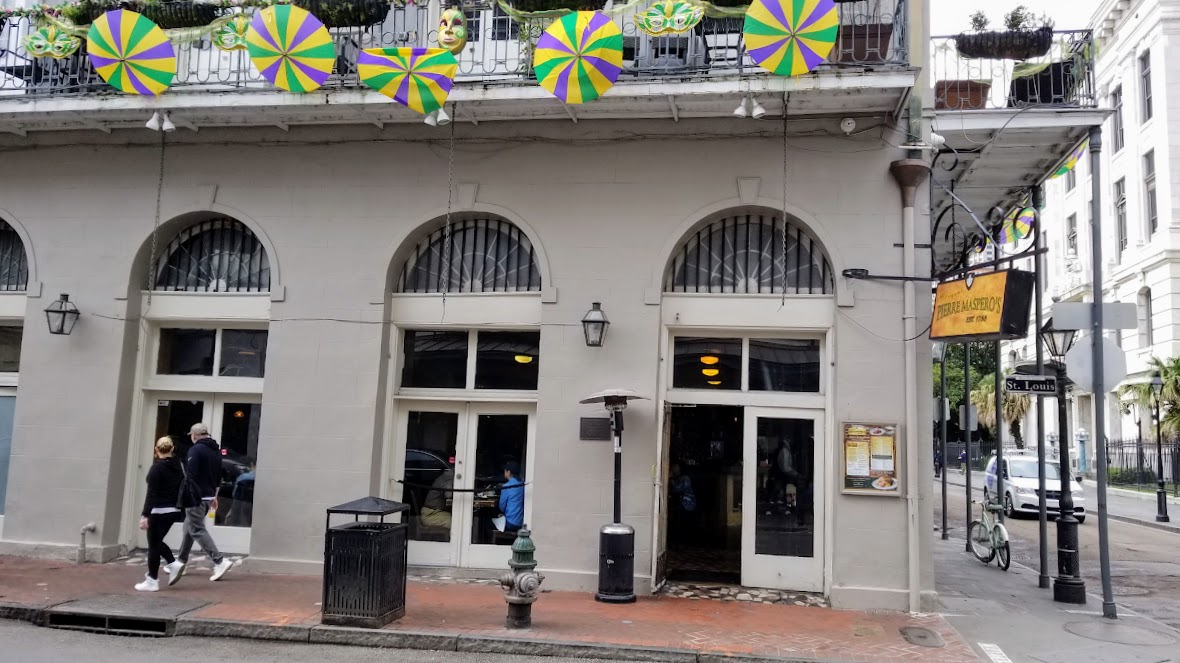 Once a Slave Exchange, this building is one of the oldest in the French Quarter, having been erected in 1788. It was here that Andrew Jackson met with the Lafitte brothers to plan the defense at the epic Battle of New Orleans. Although the history was interesting, the breakfast was only average. Not a restaurant we would visit again, at least for breakfast. 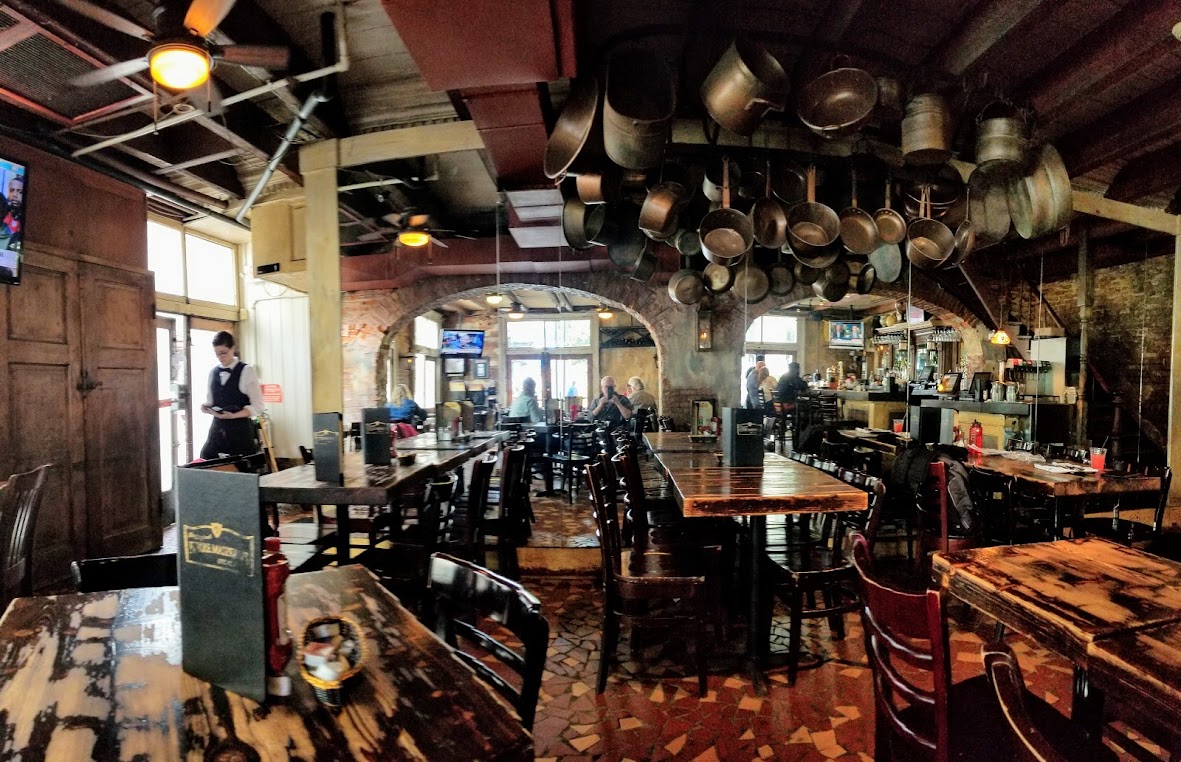 We were really looking forward to our next stop, Blaine Kern’s Mardi Gras World where we planned on taking a tour to see how the floats are built. Since it was Stop #16 on the sightseeing bus route, we would have to ride the entire route again. Instead we decided to take advantage of the free Mardi Gras World shuttle bus. Just call them from one of their designated stops and they will send the shuttle bus to pick you up. It was just a short walk (.2 mile) from the restaurant to the Hotel Le Marais on Conti Street. What fast service – within 5 minutes of calling for the shuttle we were on board and on our way to Mardi Gras World. 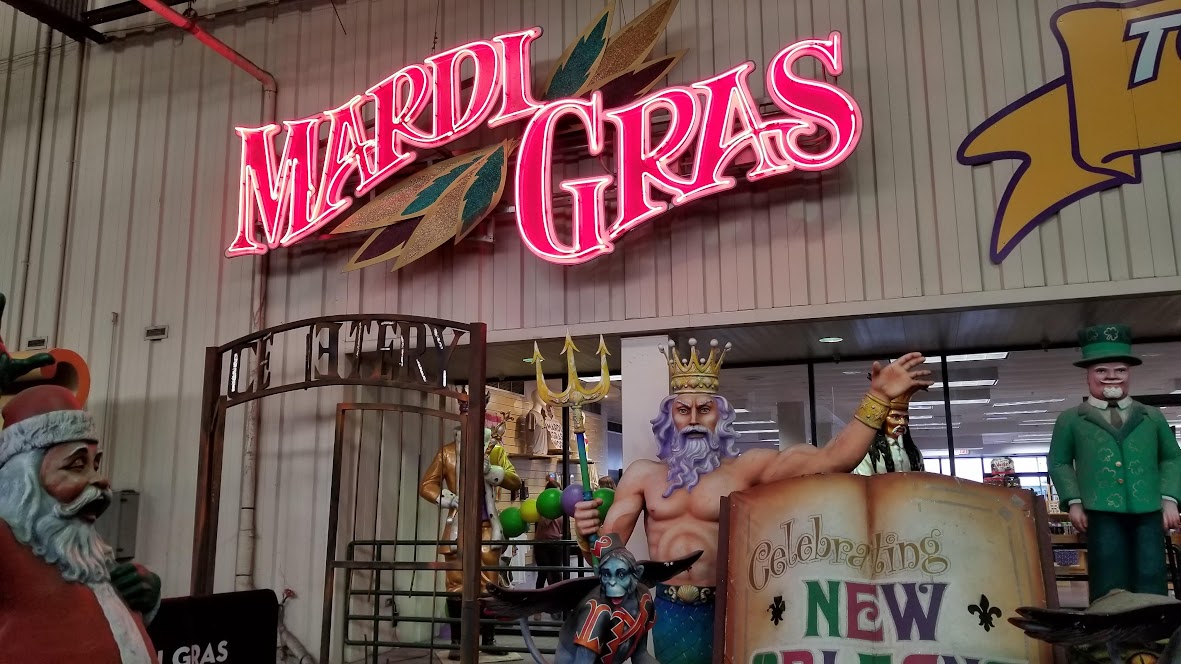 Our tour started off with a 15 minute video about Mardi Gras, its history and how Blaine Kern started making floats. Although Kern Studios isn’t the only float maker in town (there are approximately 11 others including Royal Artists and Studio 3), today the company is under the 3rd generation of Kern leadership and is one of the world’s premier entertainment production and specialty fabrication companies. Since 1947, according to their website, their artists and craftsmen have “designed and built the oldest and biggest parade floats and attractions for each Mardi Gras season, with over 500 floats built and decorated each year.”  In fact, here are some stats from one of their blog posts: “The most recent season included 54 parades and featured 1,061 floats, 588 marching bands, and more than 135,000 participants. The combined parade routes covered 301 miles and the processions were on the street for 204 hours. In 2000, it was estimated that more than one billion dollars in spending was tied to Mardi Gras.” 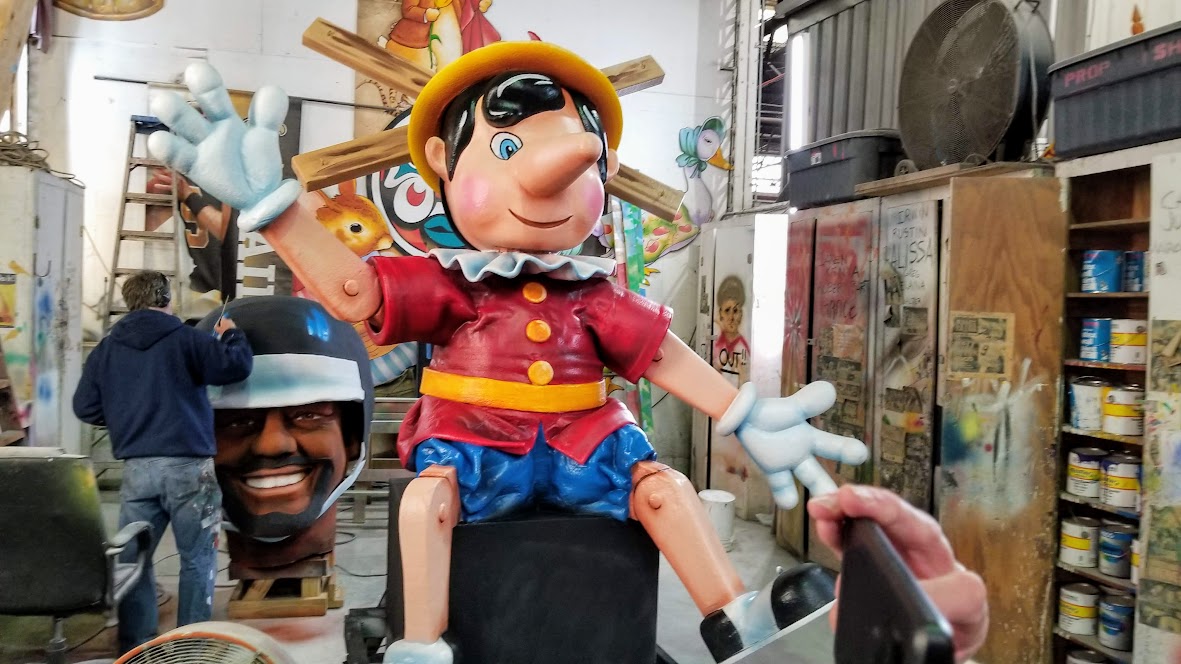 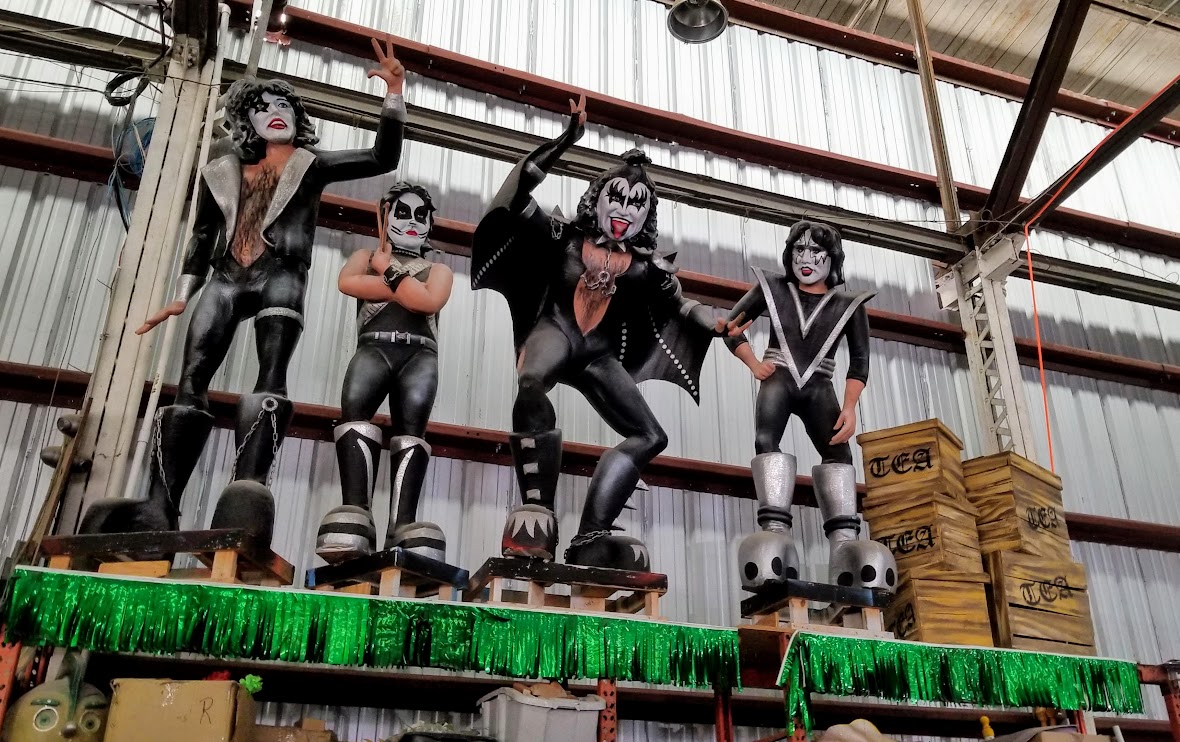 But we also learned that Kern Studios is not limited to just Mardi Gras floats, they have also created floats for the Macy’s Thanksgiving Day Parade, Universal Studios parades and Superbowl parades. Their clients range from theme parks and attractions (Disney and Universal) to retail and advertising (Captain Morgan, Coca Cola, Red Bull, NFL, NBA, etc.) to resorts and casinos (Harrah’s, MGM Grand, Hard Rock Cafe, etc.) and many others. Probably the most recognizable are the life-sized 3D cows and accompanying props for billboards for Chick-fil-A. 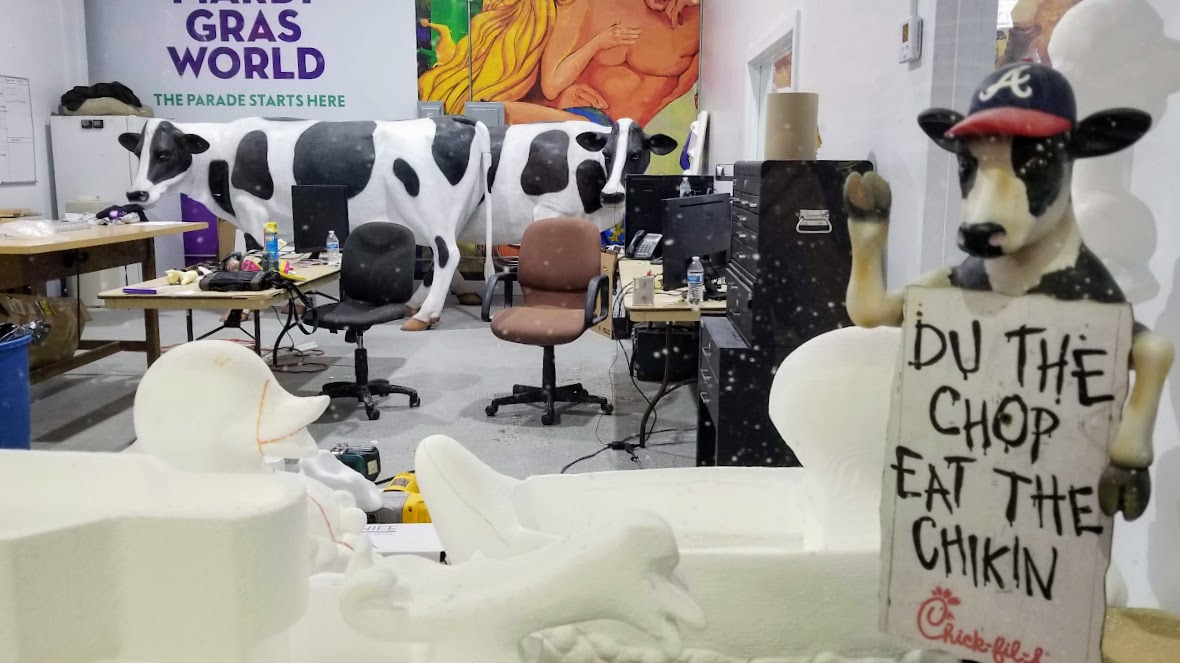 In 2017 they worked with Walmart to promote their home delivery campaign using UBER. If you’ve ever seen a tomato, banana, head of lettuce, or an orange on the top of an UBER car, you can be sure that it was engineered by Kern Studios.

Once the video was over, our tour guide served everyone a piece of King Cake explaining that the person who finds a baby trinket, which symbolizes luck and prosperity, in their slice has to buy the next King Cake or host the next Mardi Gras party. Over 500,000 King Cakes are sold in New Orleans each year! It was tasty but let’s just say we didn’t run out to the nearest bakery to buy one!

From there we were escorted into the “float den”. Wow! Being so close to Mardi Gras there was a lot of activity going on. Although some of the props are made from fiberglass, the majority of them are made from styrofoam either built by cutting large blocks of styrofoam or with layers and layers of foam glued together to create a three dimensional shape. The advantage of using styrofoam is that the props are lightweight and are easier to sculpt and repair. Because the styrofoam is fragile, it is covered with paper mache which makes the styrofoam easier to paint.

As soon as the festivities are over, the floats and props are returned to Mardi Gras World where work is immediately started in prep for the next year’s parade. It was interesting to learn that floats and props are reused from year to year.  Perhaps a character needs to be repainted, a hand has to be repaired, a new head has to replace an existing one or new arms need to be added. They do whatever it takes to make them compatible with the krewe’s theme (determined in April) for the following year. 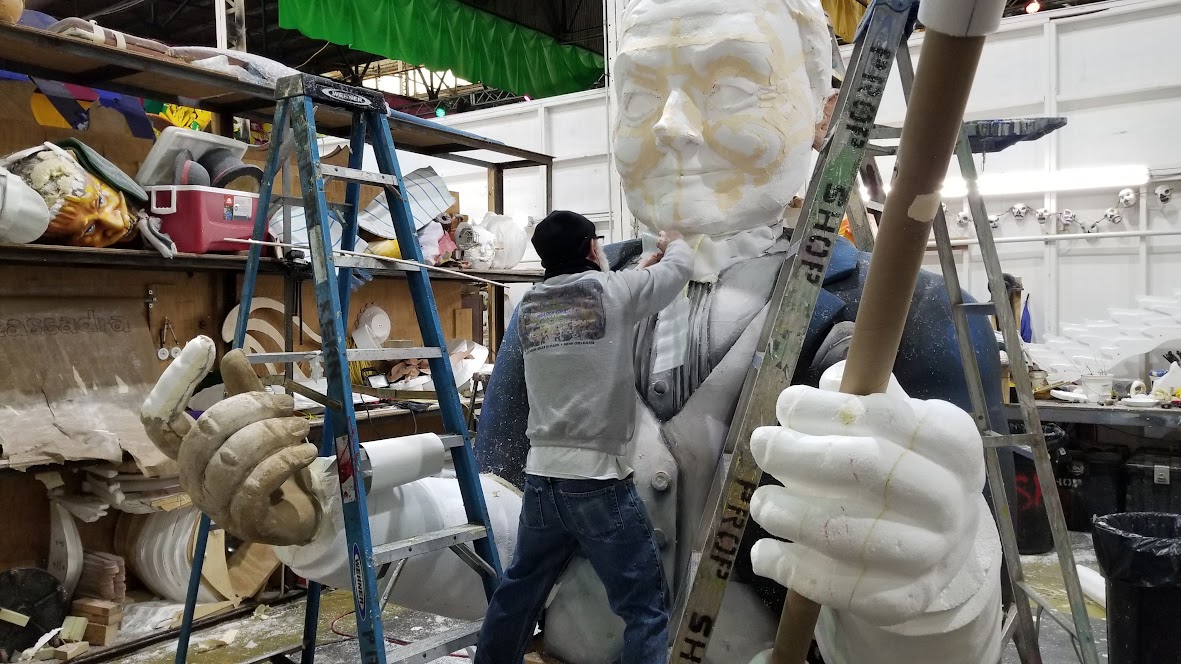 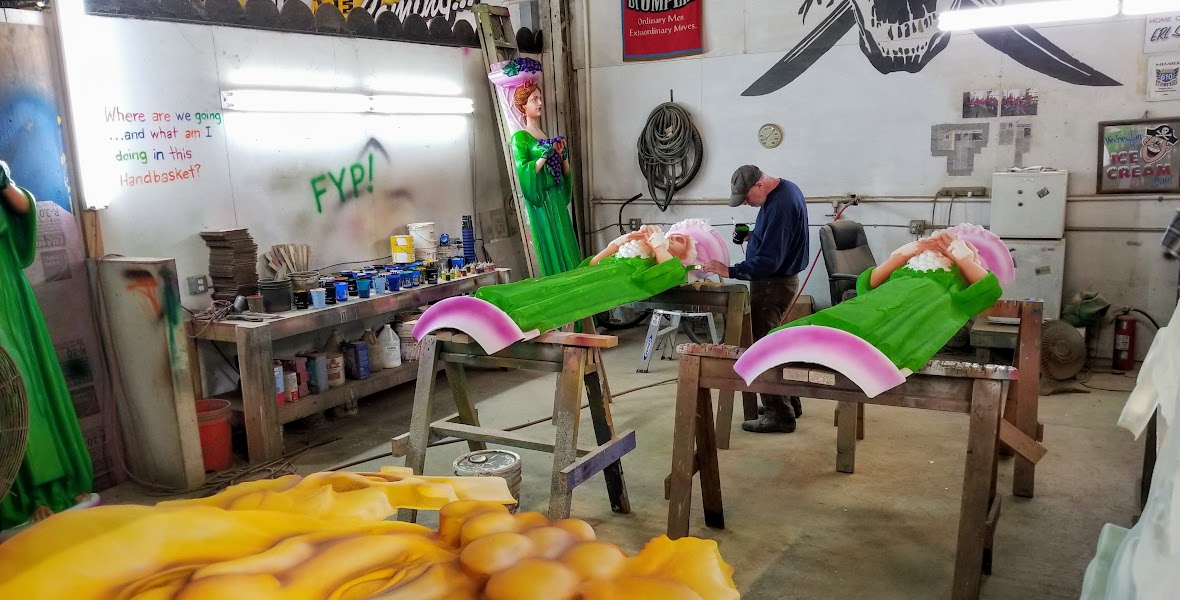 Rather than my rambling on about the process, it is explained by the people who work there in this YouTube video.

Seeing the floats up close was totally awesome!  Difficult to describe the vibrant colors and the  incredible detail. It’s hard to imagine that underneath all that colorful facade is a base of styrofoam. Wish we had asked how much styrofoam they use each year!

A few interesting facts about the floats: 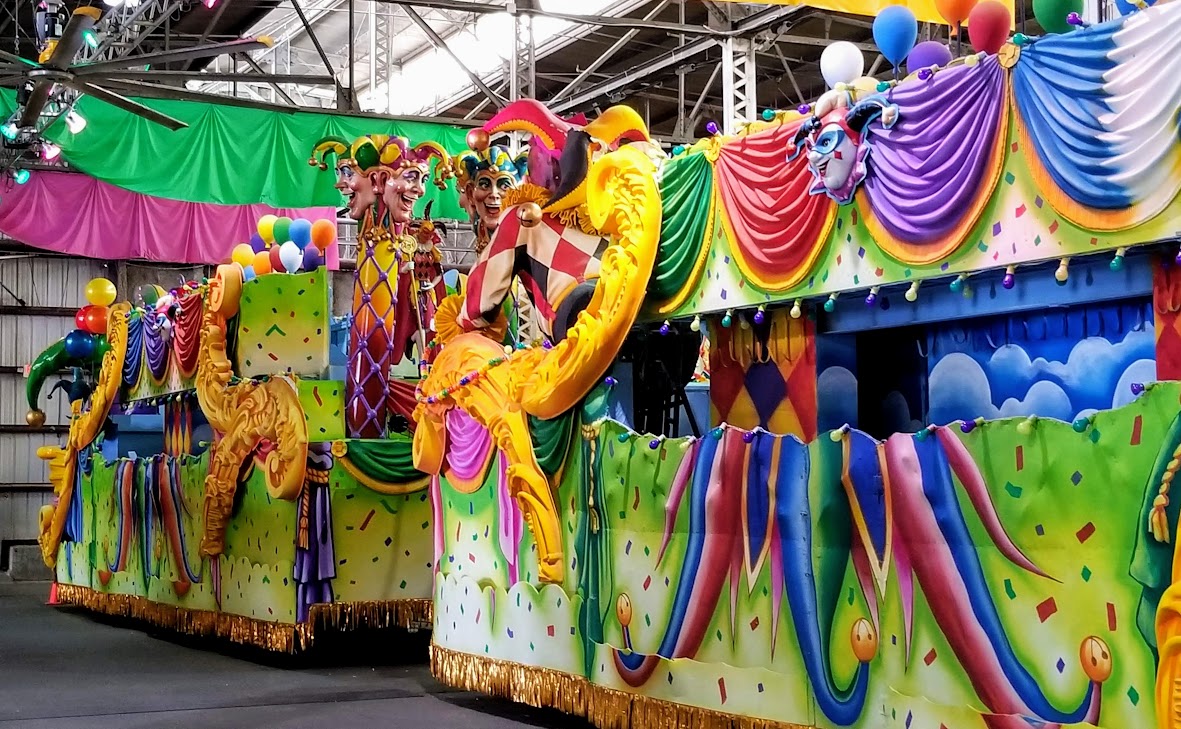 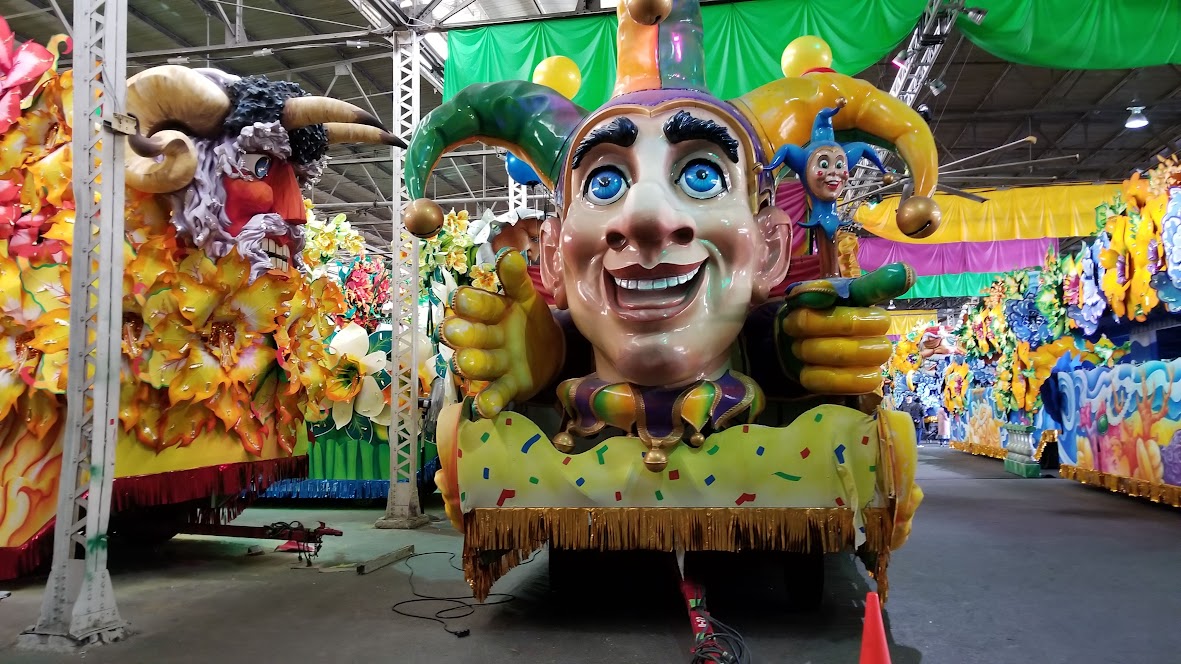 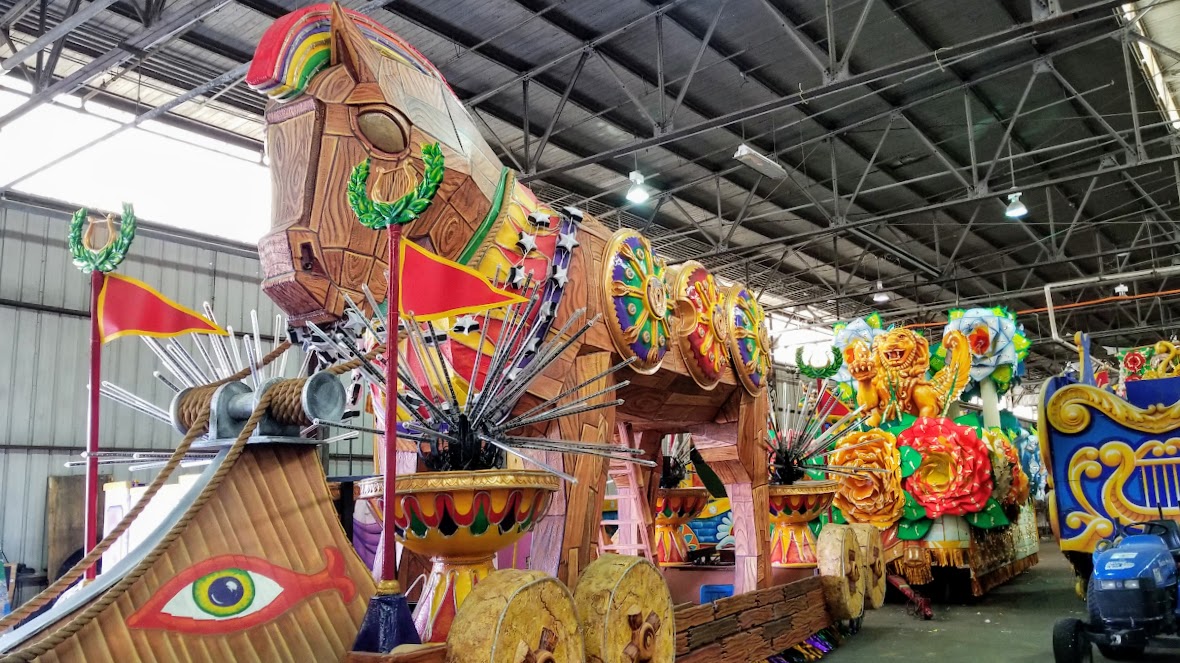 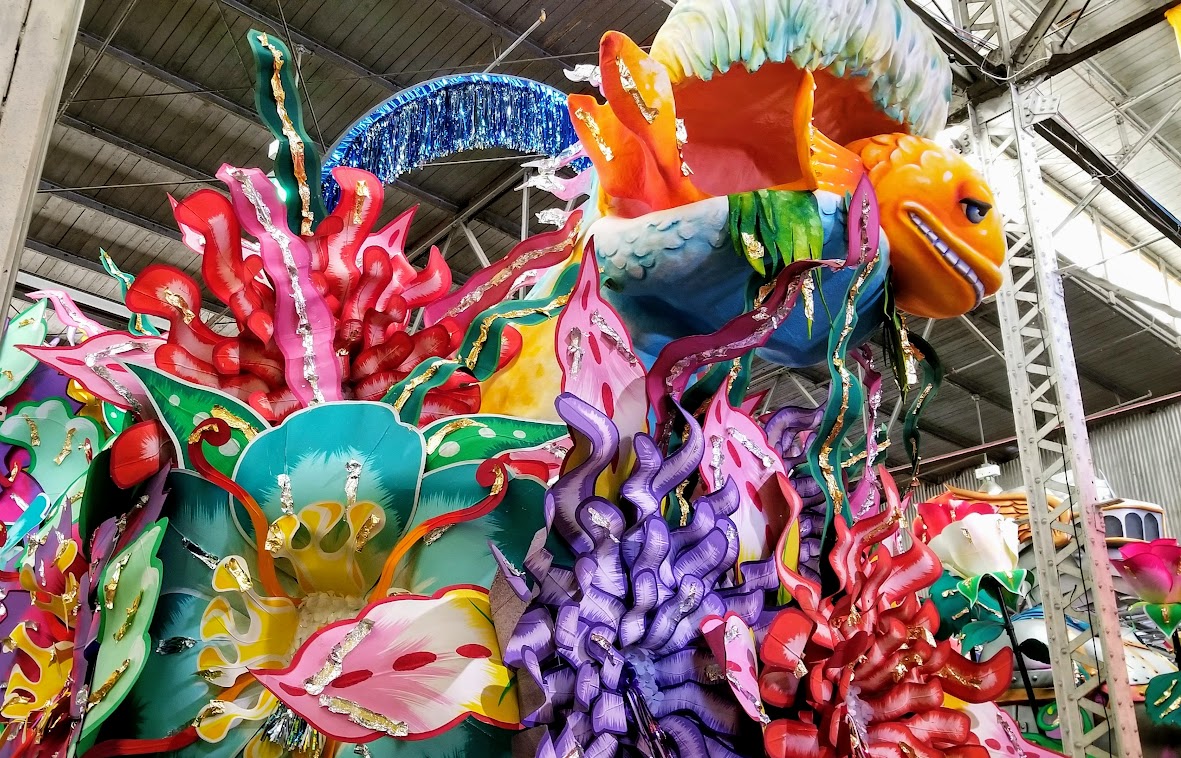 Although we didn’t see it in operation, we learned that Kern Studios has supplemented their handmade work, providing more accuracy and efficiency by implementing a seven-axis Kuka robot, nicknamed “Pixie”. 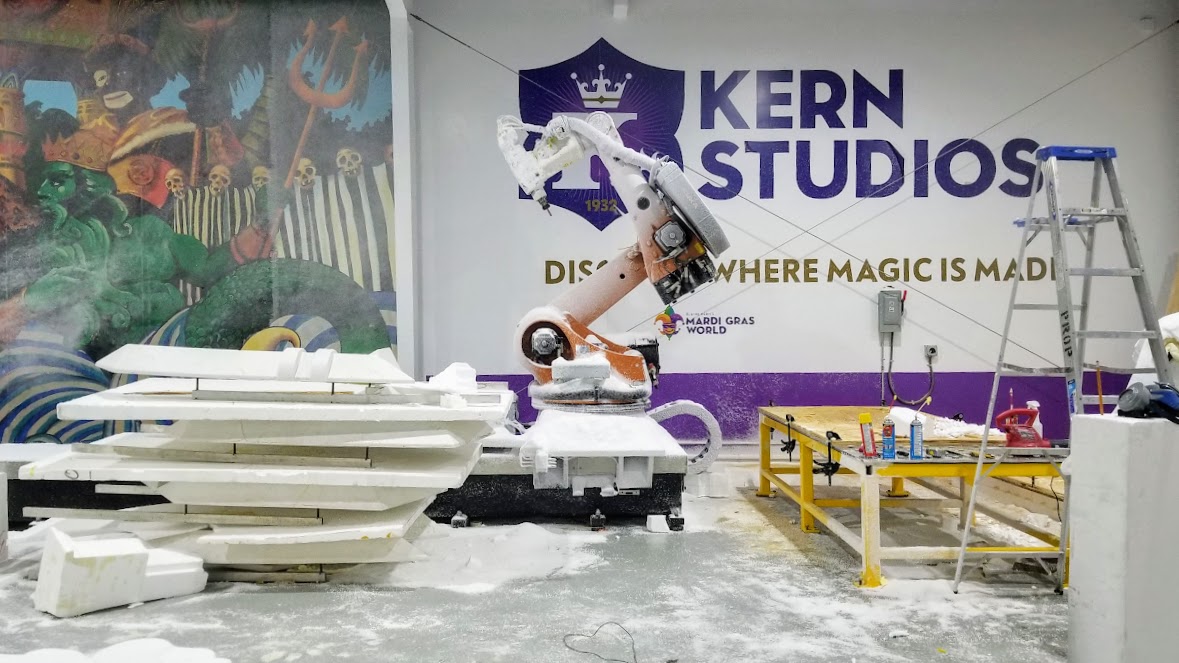 Located within a 100 x 30 feet wide, glass-walled, temperature-controlled showroom, Pixie is programmed with 3D modeling software to cut into styrofoam, wood, clay, or stone to within 1 millimeter of accuracy. To see it in operation, check out this You Tube video and this article which explains some of the more technical details. This You Tube video is even more fun to watch – the Making Ducks for Muses for Mardi Gras 2017! We were happy to learn that they sweep up, package, and recycle all styrofoam that is left on the floor after carving.

Do you remember a story about a barge crash back in May of 2018? Well, that barge crashed into the wharf just outside of Mardi Gras World’s float den causing millions of dollars of damage. Luckily no one was hurt. 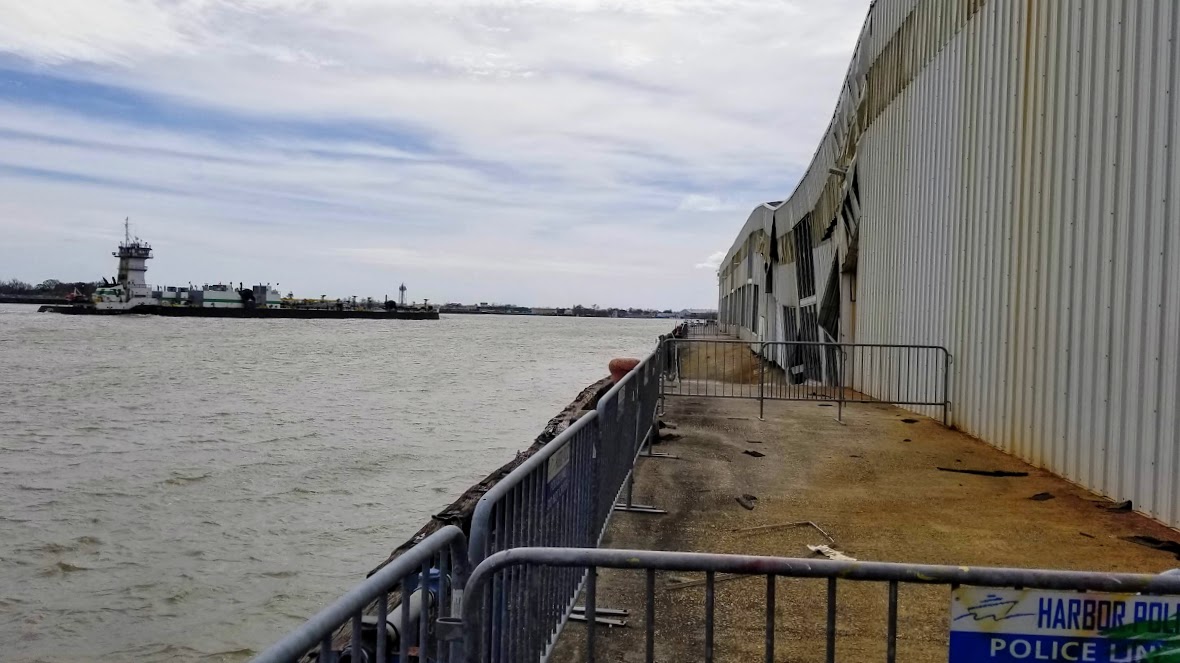 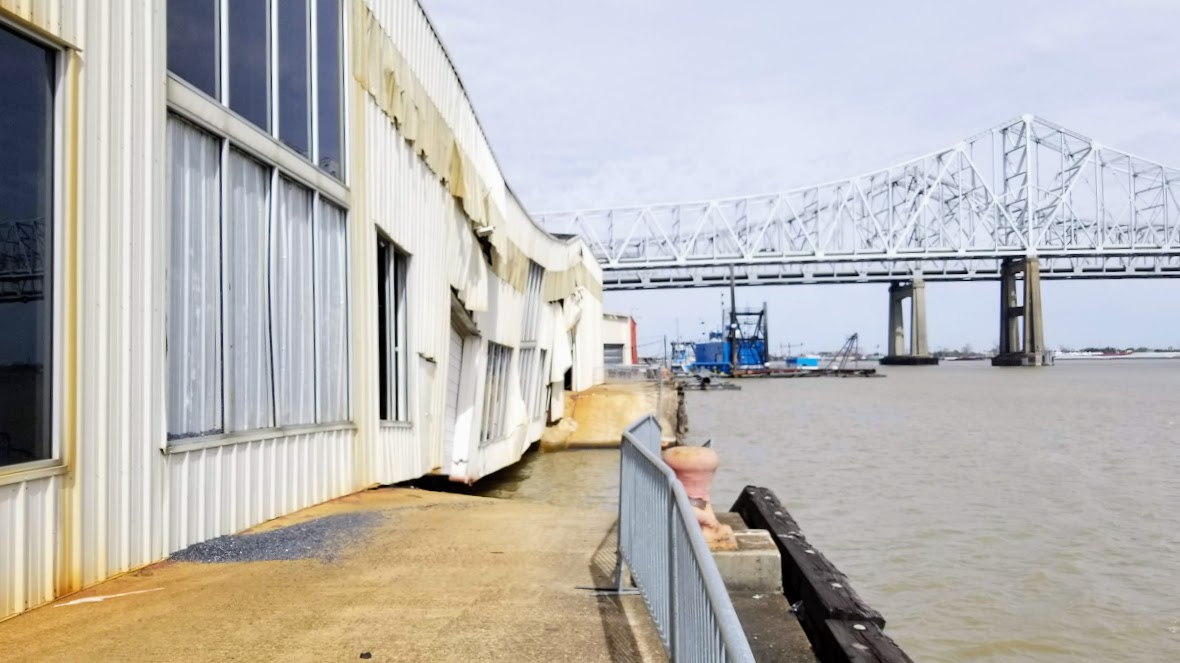 Here’s an article and a video of what it looked like after the crash. We were told that the tugboat which was pushing six concrete-laden barges upriver, “lost its steering” when it crashed, collapsing the pier and causing part of the building itself to sag toward the water. Yikes! 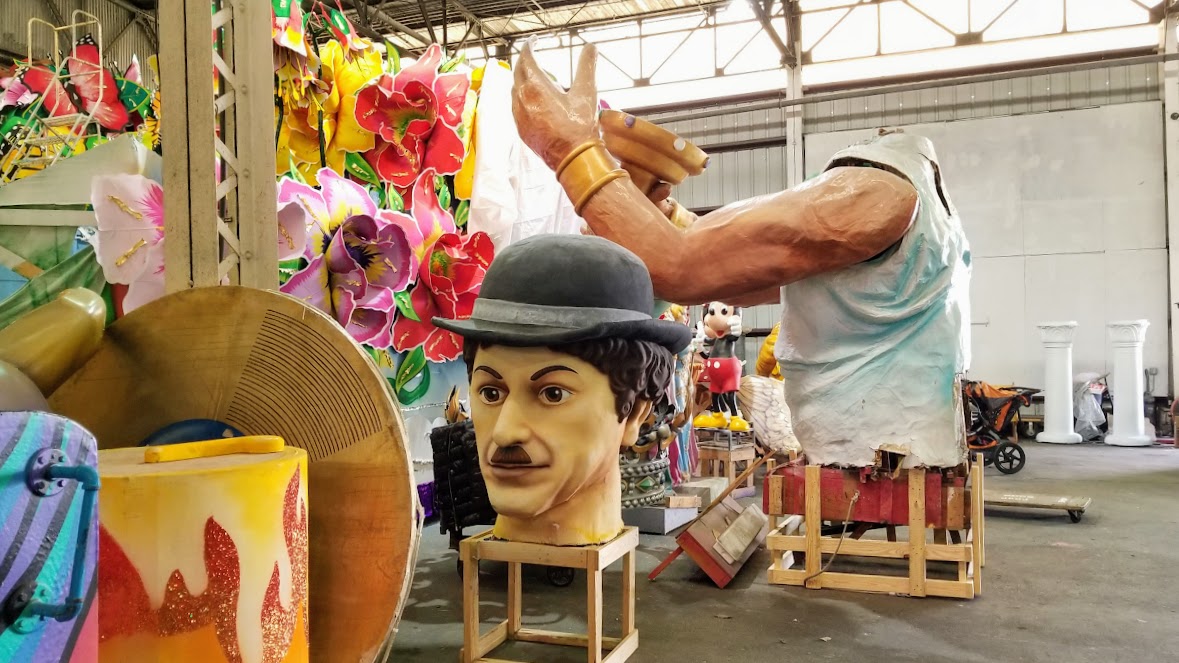 After the official tour was over, we were allowed to roam around and take more pictures. What a great tour! If you are ever in New Orleans, this is a must do! 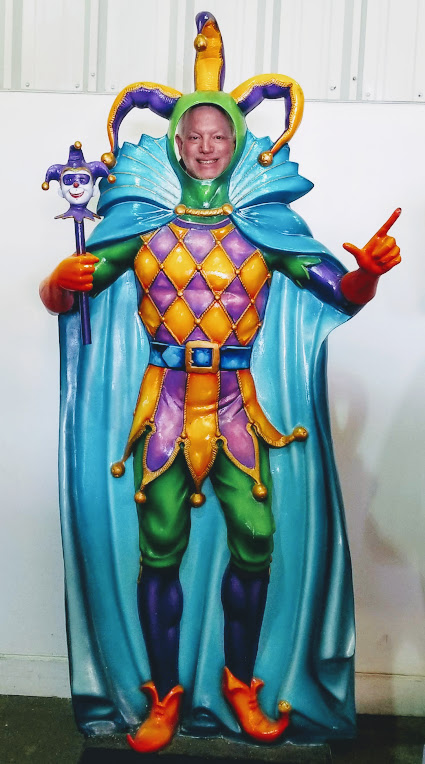 Even Sparky got in the spirit!

We certainly know a lot more about Mardi Gras than we did when we arrived in New Orleans! Has this visit put being there for Mardi Gras on our bucket list? Could be! Now that we were better educated, we are kind of intrigued with participating in some of the parades.