The sun! Finally on Wednesday after several days of gloom! Time to don our sightseeing sneakers! 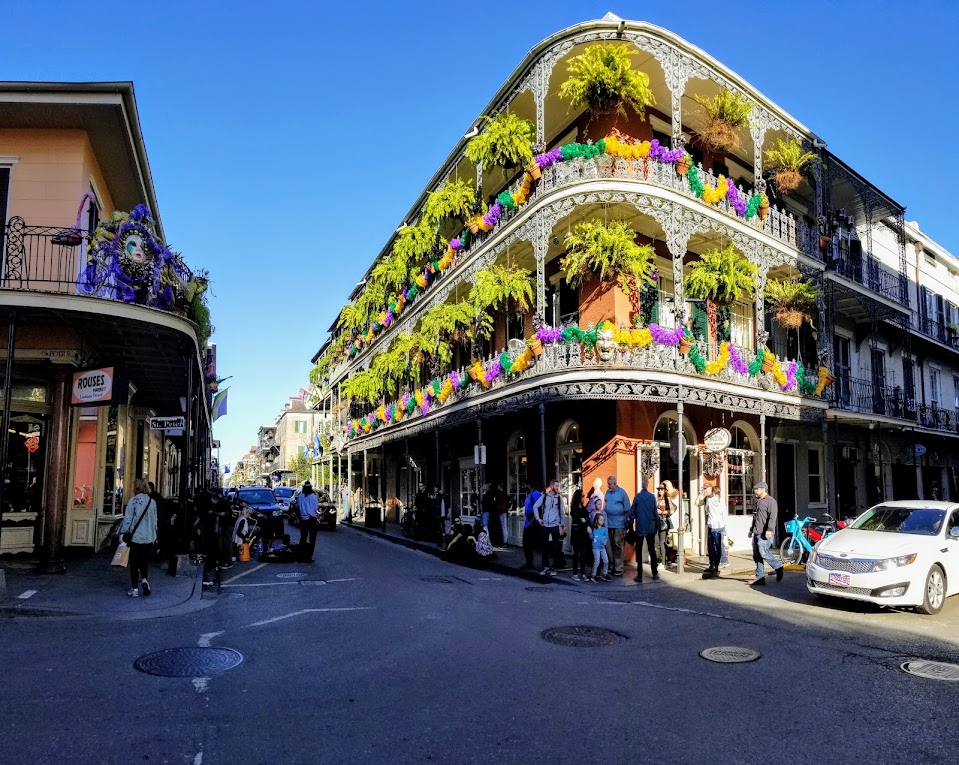 Initially we had planned on taking the shuttle bus offered by the campground into the French Quarter, figuring parking would be both expensive and difficult. But we were concerned it’s limited schedule might be inconvenient. What if we wanted to return earlier than 4:00 p.m. or perhaps stay a bit later? Well, as usual my chief researcher hubby managed to find a deal at the French Market, specifically the Parking Lot entrance on St. Peter (exact coordinates for the entrance here). This lot is very conveniently located just steps from the Cafe Du Monde and Jackson Square. Best of all cost wasn’t any more than the shuttle and we could come and go when we wanted to. Just enter the lot by 10:00 a.m. and leave between 2:00 p.m. and 7:00 p.m., cost $12. Sold! There were two other lots run by the Market that were an even better deal – $6 for the same time period but they weren’t as conveniently located for us.

Even with a little bit of traffic, it was only a 22 minute drive taking the back roads and avoiding the congestion on I-10 to get to the lot. By leaving the resort by 9:15 a.m. we arrived there well before 10:00 a.m. And to our surprise there were plenty of parking spaces! We had no problem getting a spot for all three days we went into town.

And even more surprising, nearby Cafe Du Monde wasn’t crowded when we arrived! That was totally amazing. Each time we have visited NOLA before, there have been lines a mile long (well, maybe not quite that long) so we’ve never been able to sink our teeth into one of those square deep-fried nuggets of sweetened dough, commonly known as a breakfast served with powdered sugar on top. 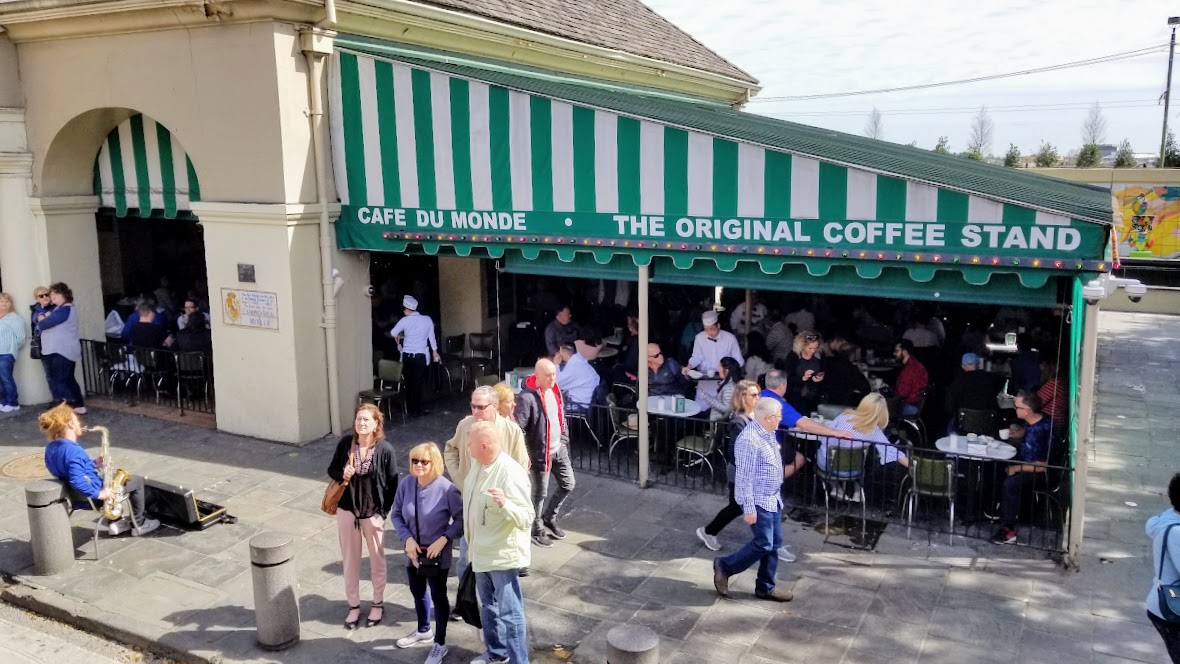 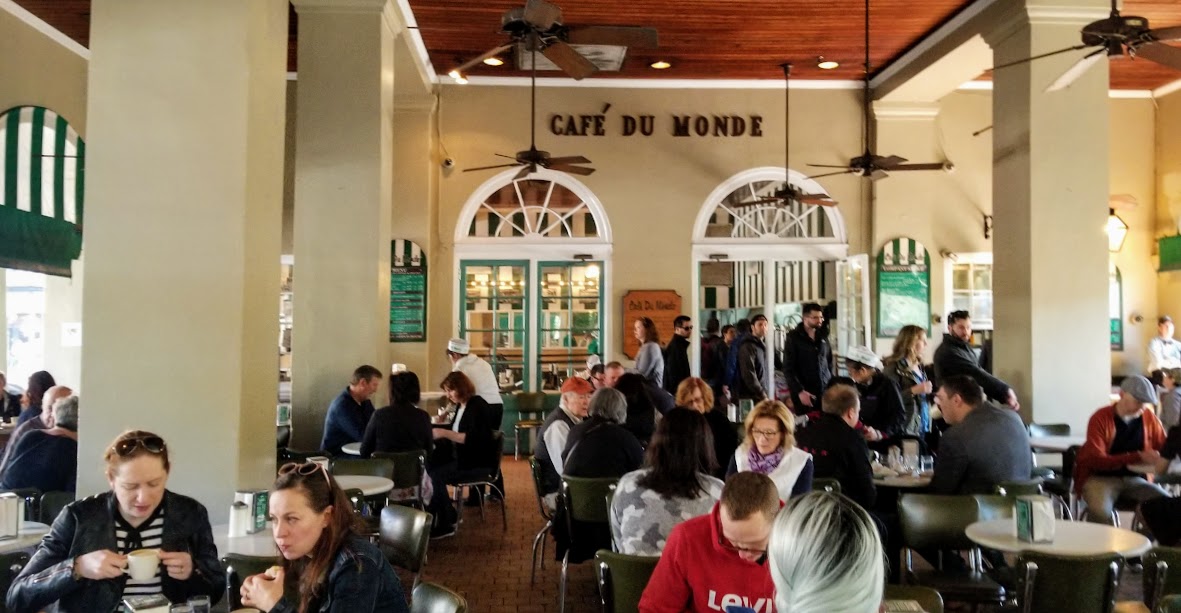 One order of beignets (3) was just $2.73 and plenty for us to share and achieve our sugar high for the day. I think there was about a cup of confectioner’s sugar dumped on top! Whoa sugar overload! The coffee and hot chocolate is also $2.73 each. When tax is added the $2.73 totals up to an even $3. Cash only, paid on delivery. 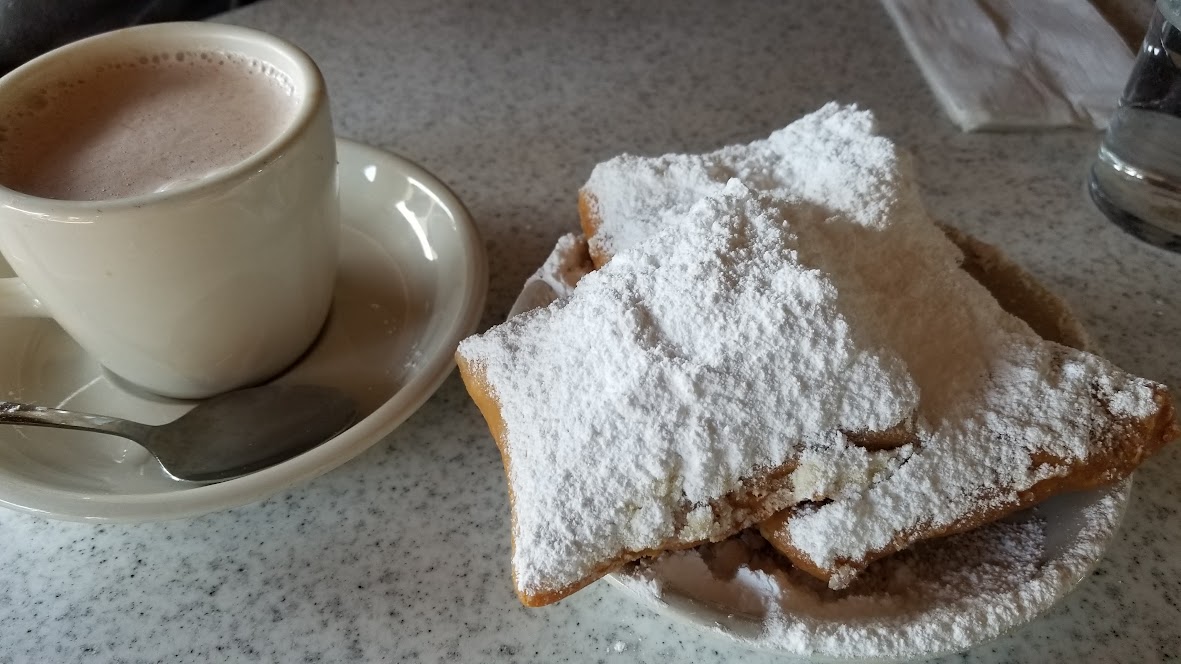 Once our sweet tooth (or is it sweet teeth?) had been satisfied, we headed over to the nearby sightseeing ticket office so we could purchase tickets on the Hop On, Hop Off City Tour on a double decker bus. 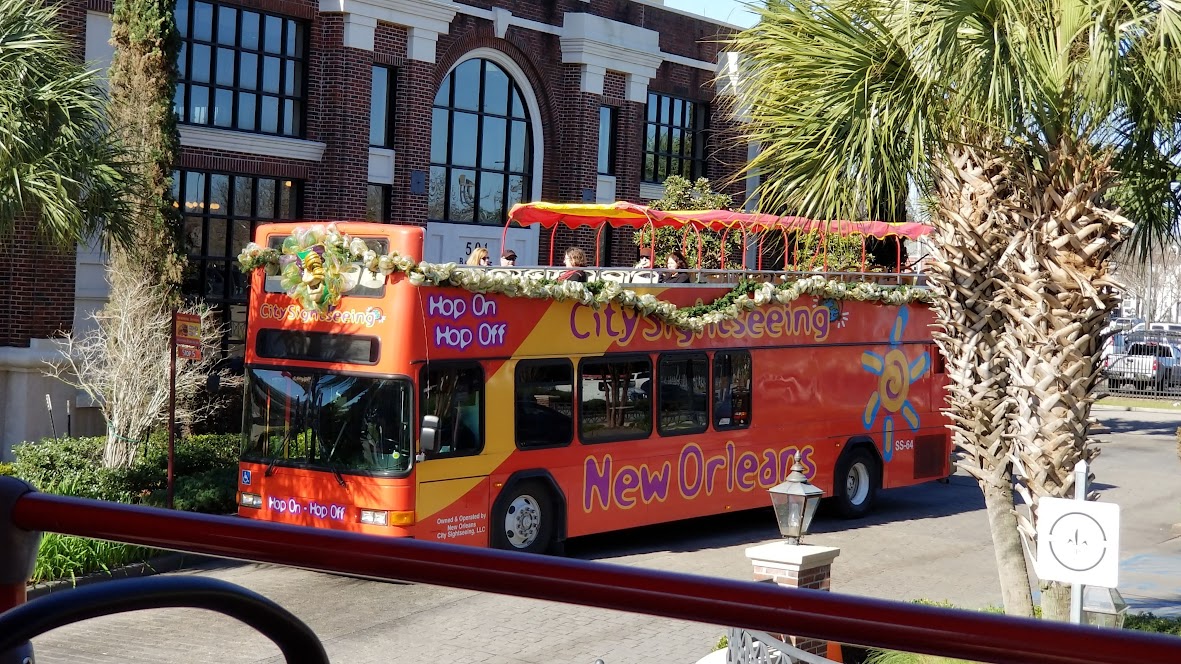 The live guide narrated tours operate seven days a week from 9:30 a.m. to 5:30 p.m., every 30 minutes so if you do decide to hop off, there are no long waits to hop on the next bus (unless as we found the bus is full so you have to wait for the next one). There were two options for tickets – a one day ticket for $39 per person and a three day ticket (days must be consecutive) for $49 per person. Since we planned on being in the city for the next three days, we purchased the three day ticket as it seemed to be a better value. This not only gave us the three days of unlimited sightseeing, it also included a walking tour of both the French Quarter and the Garden District and a self guided tour of Lafayette Cemetery #1. Both walking tours are given every hour on the hour, starting at 11 a.m. until 3 p.m.. Without the three day City Sightseeing ticket, the cost would be $20 for each guided tour.

Did we like this tour? Yes, it’s great if you aren’t familiar with the city and is a good way to learn the lay of the land. Would we do it again? Glad we did it, but no. Now that we know the ropes there are cheaper and faster ways to get around.

A cheaper mode of transportation for example are the streetcars. The fare is $1.25 and must be paid with exact change when you board. One, three, and 31-day unlimited ride “Jazzy Passes” are also available for $3, $9 and $55 respectively. Obviously there is no narration given. Probably during our next visit we would hop on and hop off the streetcars. More information about the fares and routes can be found on the New Orleans Regional Transit Authority website.

During our tour, we learned that the dark green St. Charles streetcar is the oldest continuously operating streetcar line in the world, having been in operation since 1835. For more information, check out this website. 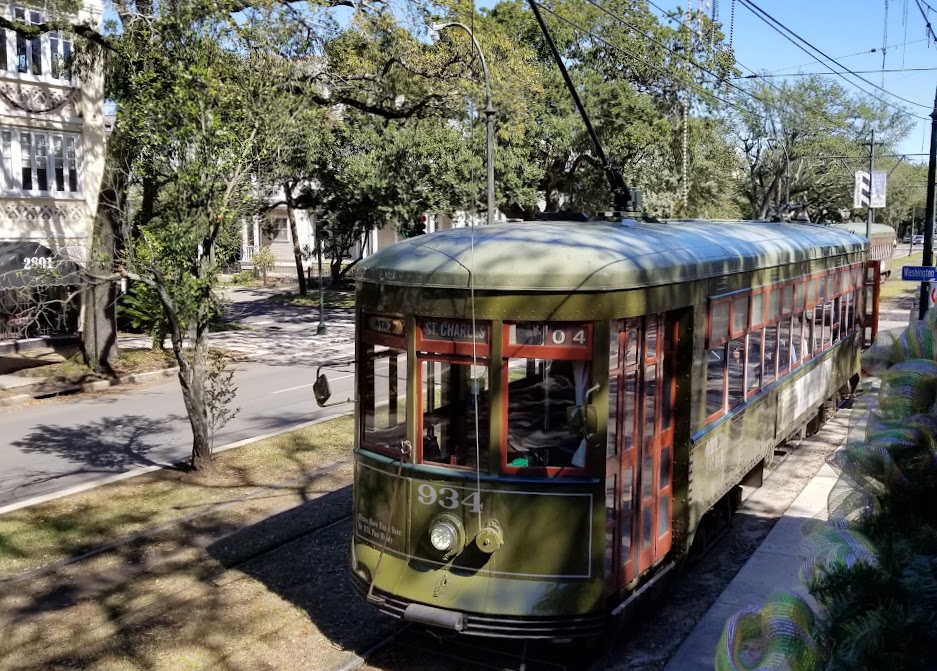 Wanting an overview of the entire city, we initially decided to ride the entire 2 hour loop, grabbing a seat on the first available bus on the upper deck even though it was rather chilly that day. Covering 18 stops, it was a great way to see the famous landmarks while learning about the city’s history, culture and in particular the city’s biggest celebration – Mardi Gras. BTW, over the three days we found that the buses were less crowded taking the tour in the morning. By afternoon, especially closer to the weekend, most of the buses were full so people waiting at the stops had to wait for the next bus.

The bus stops for a 15 minute rest stop at the Basin Street Station (stop #5), which is the city of New Orleans’ welcome center with adjoining parking for visitors (parking is only $5 for 10 hours on weekdays, $10 weekends). The first floor contains a staffed visitor information center featuring educational community exhibits, a performance venue, a walking tour kiosk, and an authentically New Orleans and Louisiana gift shop. This building was “once the transportation crossroad of the city of New Orleans, the rare vestige of five railway stations and their associated buildings that served downtown New Orleans in the early 20th century.”  Unfortunately our 15 minute stop turned into a 45 minute stop as the bus we were on had a mechanical failure so we had to wait to transfer to another bus. 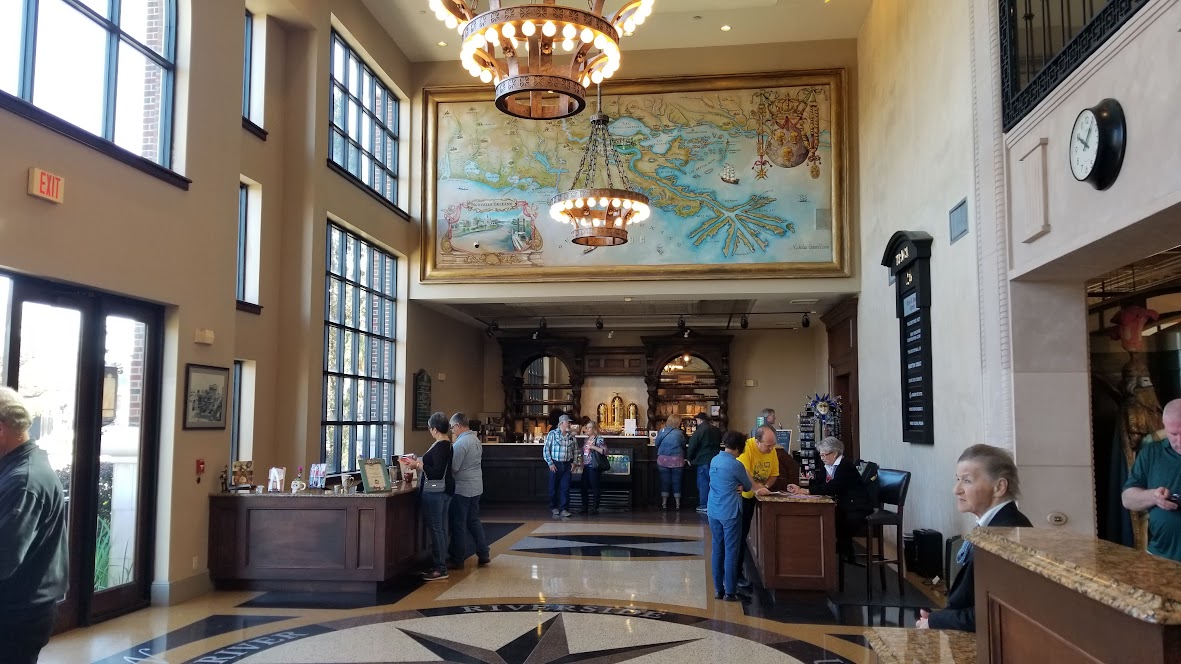 Our tour guide provided a non-stop narration for the entire two hours. Obviously we were told a lot of facts (most of which have since been forgotten), but here are a few we remember: 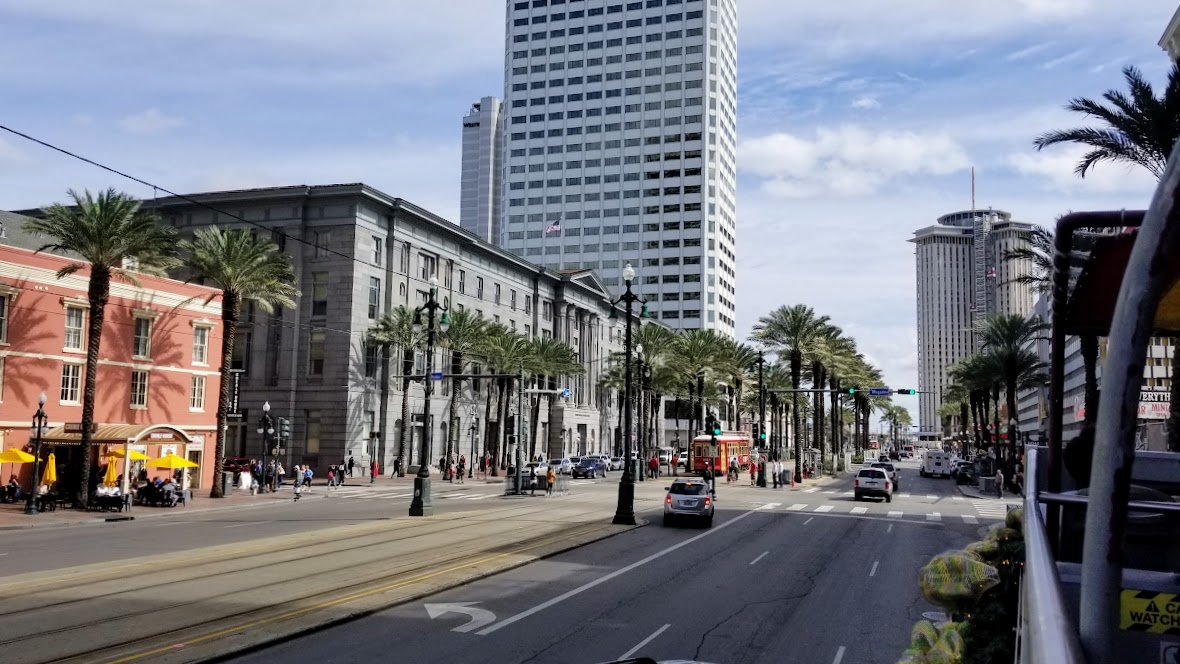 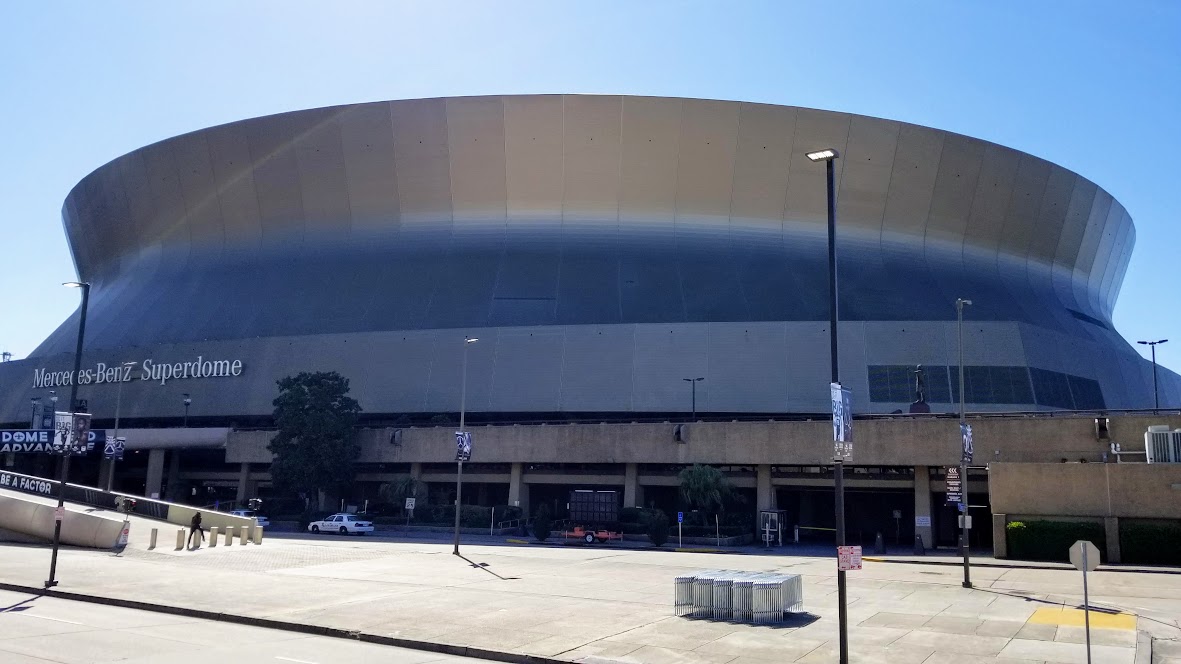 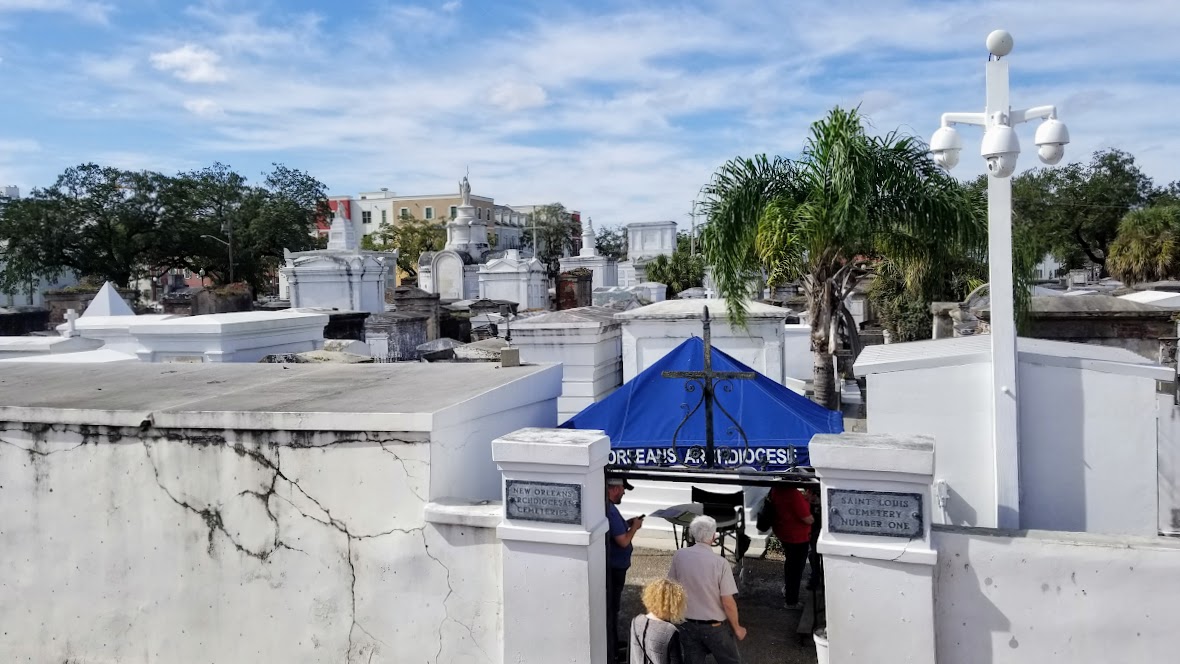 Obviously there was a ton of information presented in those first two hours – information overload!  And this was just our first day! Over the subsequent two days, we would listen to similar narratives given by several different tour guides, each one presenting much of the same information but with a different perspective.

The timing was perfect when we returned to Jackson Square, it was just a short wait for the 1:00 p.m. walking tour of the French Quarter. But that will be covered in a separate post.

By the time the walking tour was over, our sugar high had long since worn off and soaking up all the facts had made us very hungry! We needed some nourishment. But with so many recommended restaurants where, oh, where to go?

After searching Google (what did we ever do before there was Google?), we found a nearby restaurant which had really good reviews, Muriel’s Jackson Square. 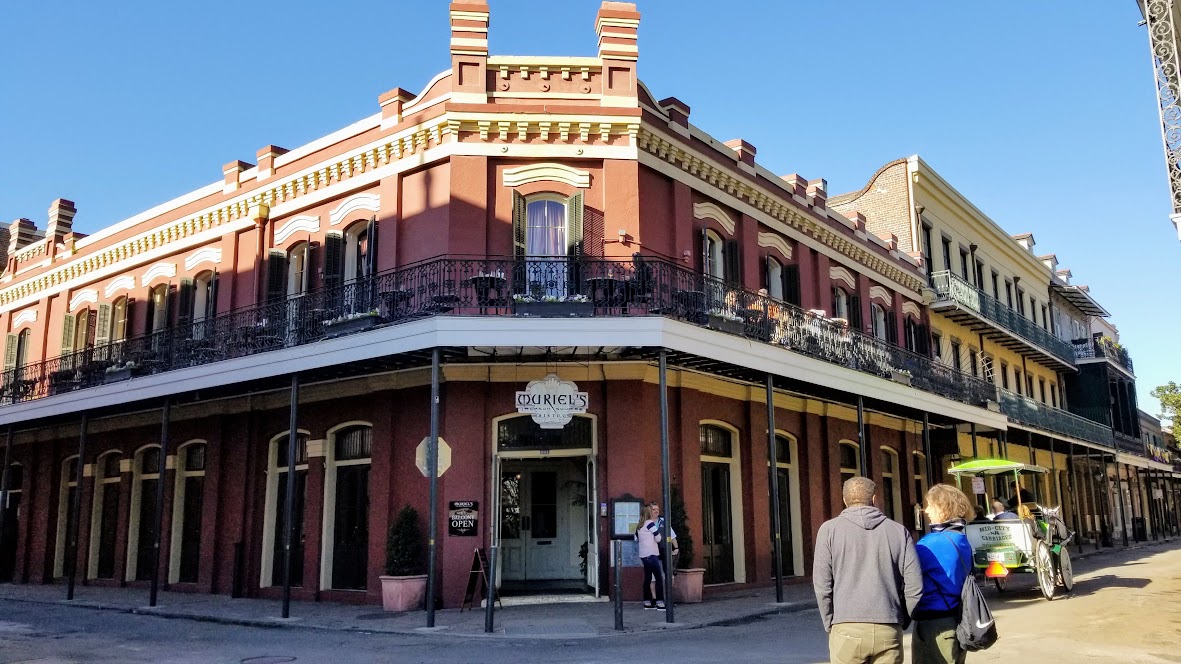 On my, what an excellent choice that turned out to be! Delicious food, wonderful ambiance, decent prices and a fascinating history. And they even have a ghost! In 1814, the owner, a compulsive gambler, Pierre Antoine Lepardi Jourdan wagered his beloved home in a poker game and lost the one thing he treasured most in life, his dream home. He was so devastated, he tragically committed suicide in the second floor slave quarters. Read more about it on their website. 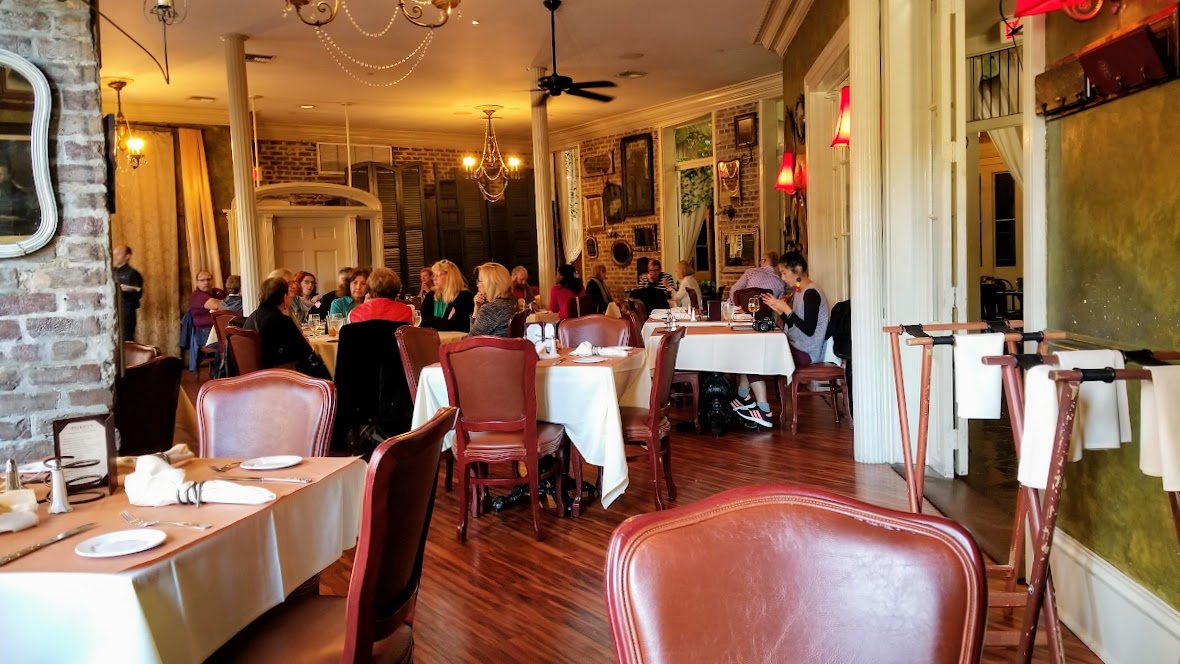 At lunch a two course package which includes soup of the day or Muriel’s house salad and a choice of five entrées for $19.95 is offered. At the recommendation of our server, we both ordered the soup of the day (minestrone) and the Blackened Mississippi Catfish, served with roasted new potatoes, sauteed spinach, dill and red onions, laced in a Crystal hot sauce butter. BTW, the catfish without the soup or salad can be ordered for $14.95. Next time we would probably not have the soup – it could have been a meal by itself. 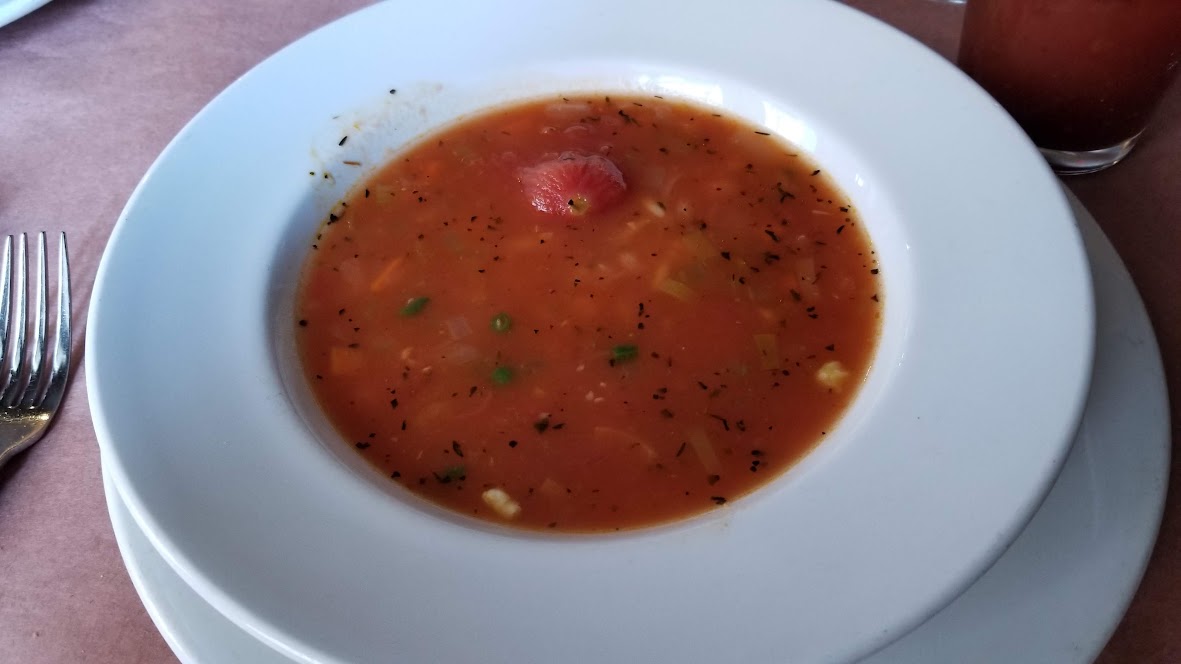 If you wish to have a luncheon cocktail, they serve Muriel’s Svedka Bloody Mary, Svedka Vodka or Gordon’s Gin Martini and daily red or white wine specials Red or White, for only $4.00 (until 3PM). 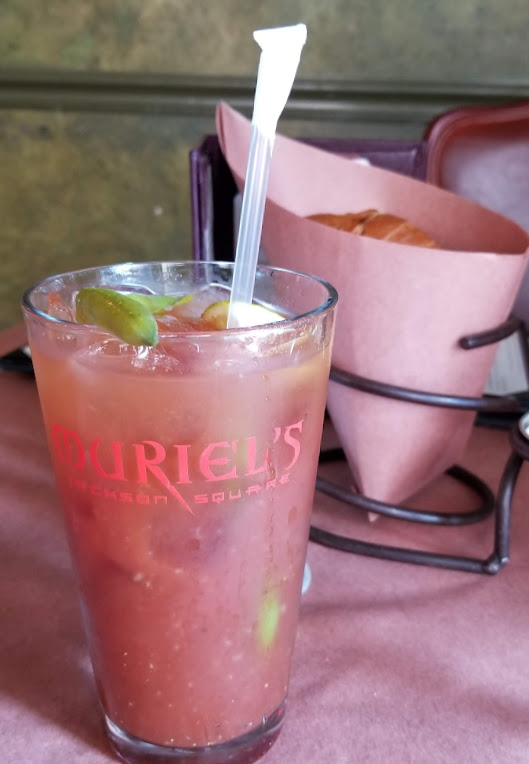 OMG, it was absolutely delicious! Probably the best blackened catfish we have ever had! Not only was the catfish seasoned perfectly but the Crystal hot sauce butter was so good I had all I could do to keep from picking up the plate and licking it! Unfortunately we were way too full to split my favorite dessert, Pain Perdu Bread Pudding with candied pecans and rum sauce. Next time! 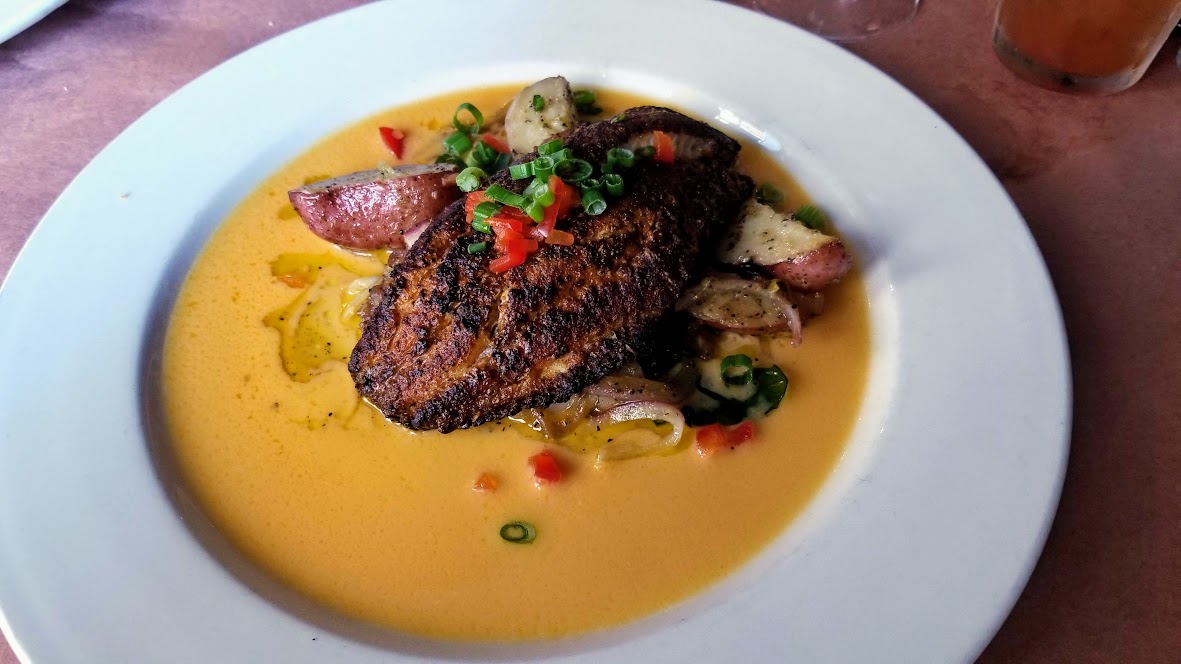 After lunch we headed upstairs to the Seance Lounge. It’s obvious that Muriel’s has embraced their ghost – at the bottom of the stairway, a VIP table is reserved for their old kindred spirit, Mr. Jourdan. It is set daily with bread and glasses of red wine. Probably a good idea to keep your resident ghost happy! 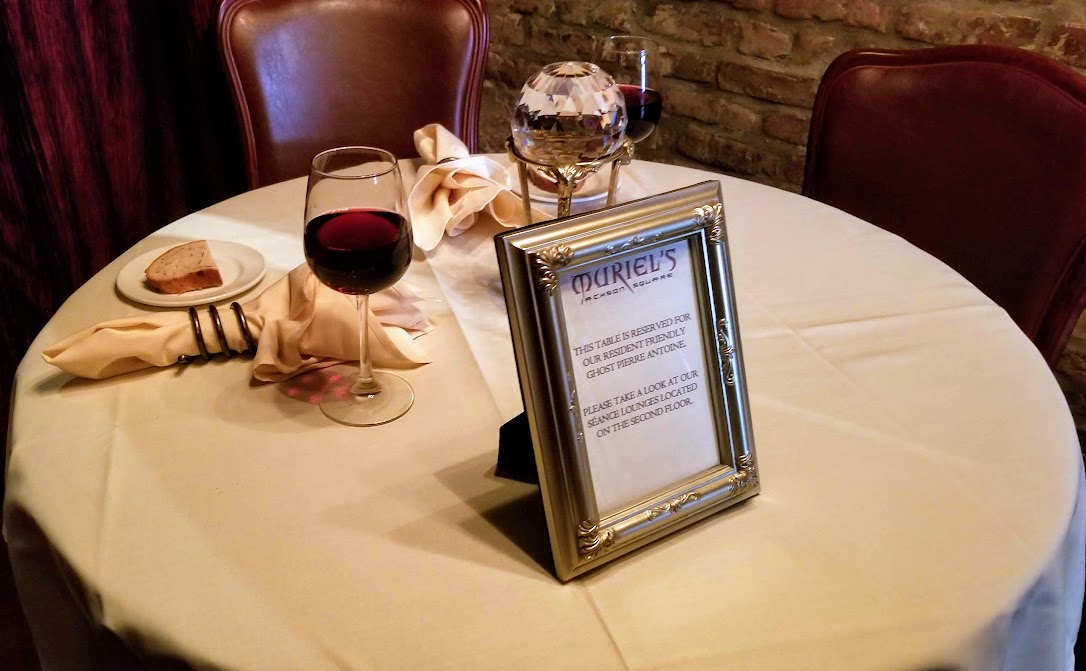 Besides the Seance Room upstairs, there is the gated Wine Room which can seat up to 10 guests. 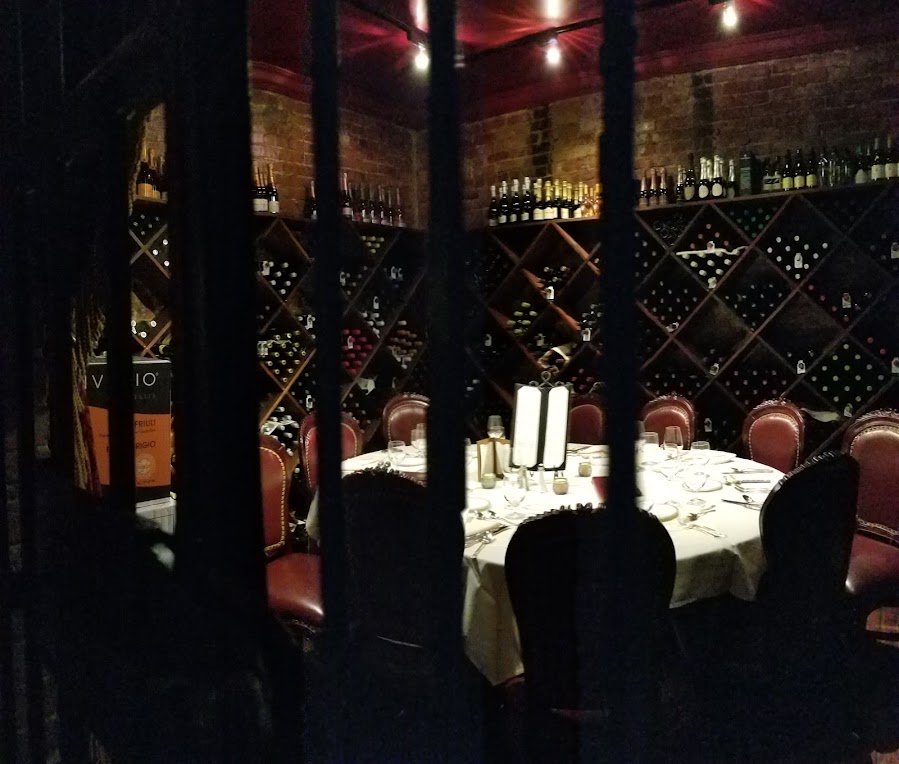 Next to that is the Seance Lounge which “marks the era of Storyville in New Orleans, when Muriel’s Jackson Square was a part of the French Quarter’s best bordellos along the Mississippi.” Wow, this sure looked felt like a bordello! Well, what I’ve seen on TV and in movies, I’ve never actually been in one. 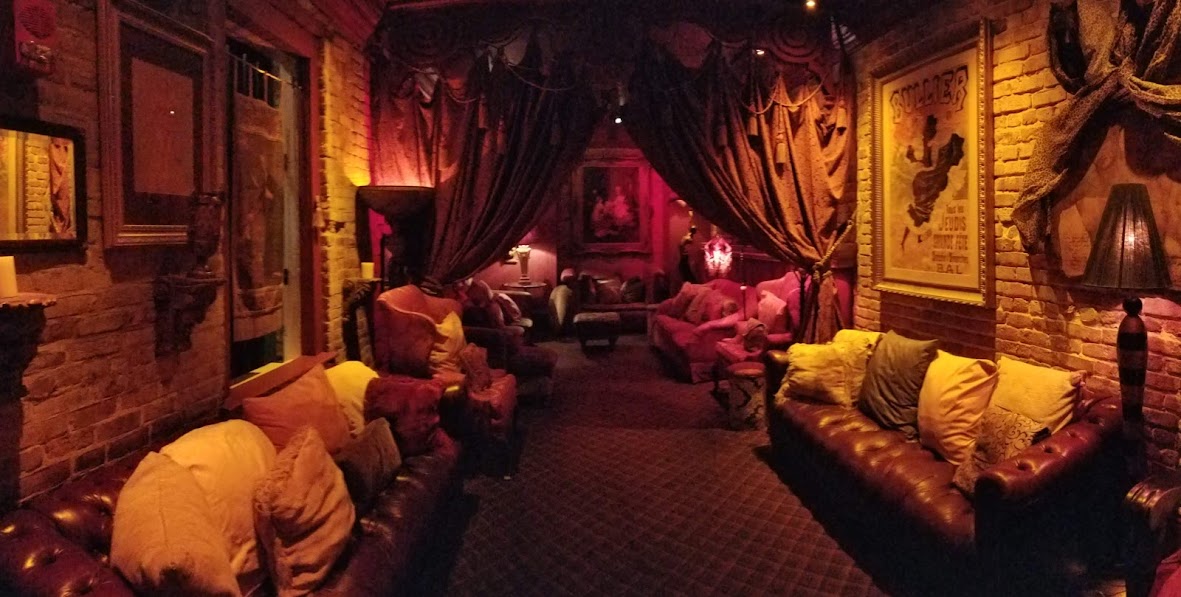 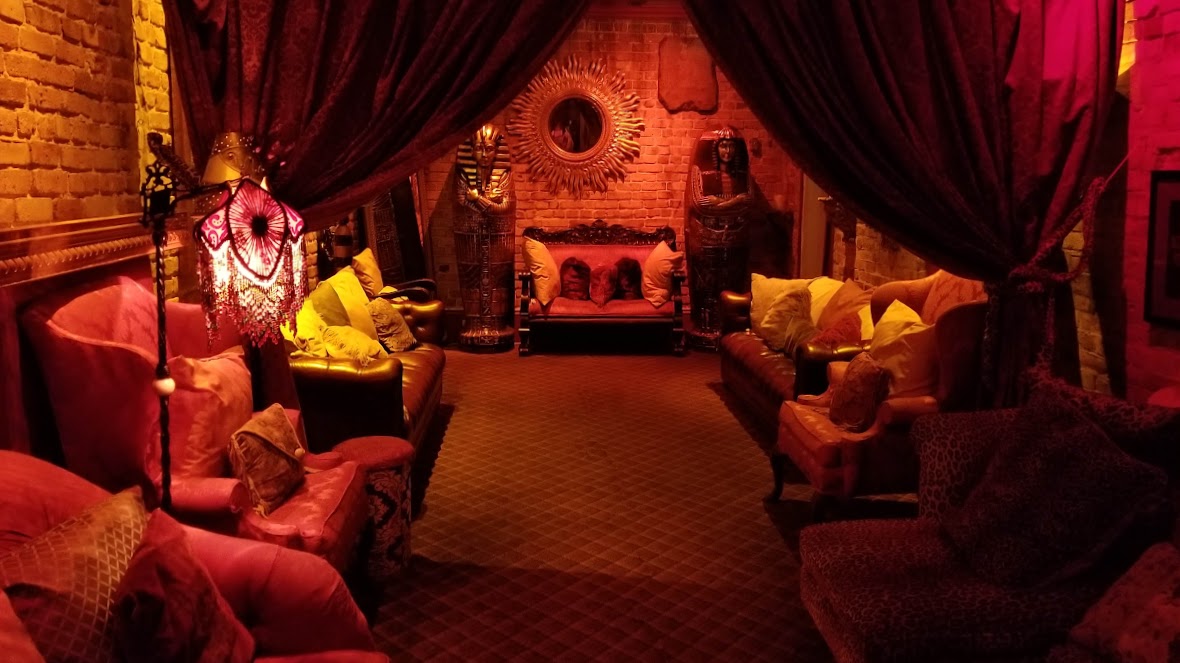 If hanging out in the dimly lit Seance Lounge isn’t your thing, sip a cocktail on their balcony – it is a perfect place to watch all the doin’s in Jackson Square. We really enjoyed Muriel’s. Great food, great prices, fantastic ambiance and history and a great place to hang out and people watch. We will be back! 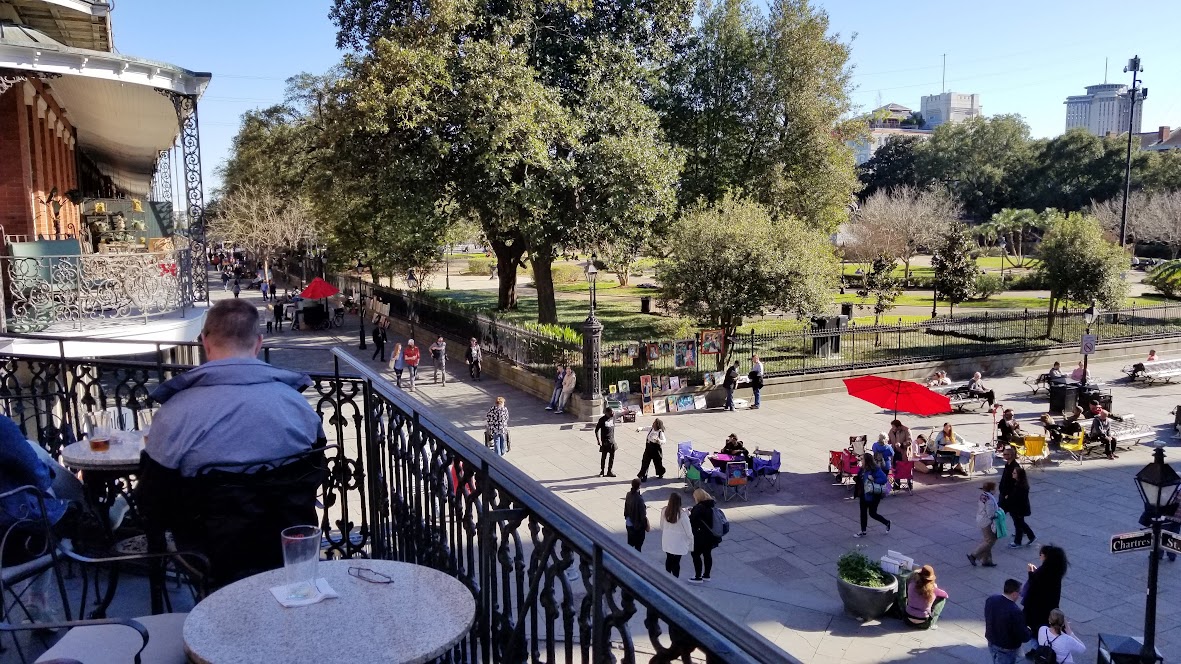 Next on our list of places to see and across the street from Muriel’s was the Cathedral Basilica of St. Louis King of France which was completed in 1851, built over the foundation of a colonial 1757 church. It has been the city’s center of worship for over 280 years and is the oldest active cathedral in the United States. One of the most noted visitors to the Cathedral was Pope John Paul II, who paid an historic visit to the Cathedral in 1987. 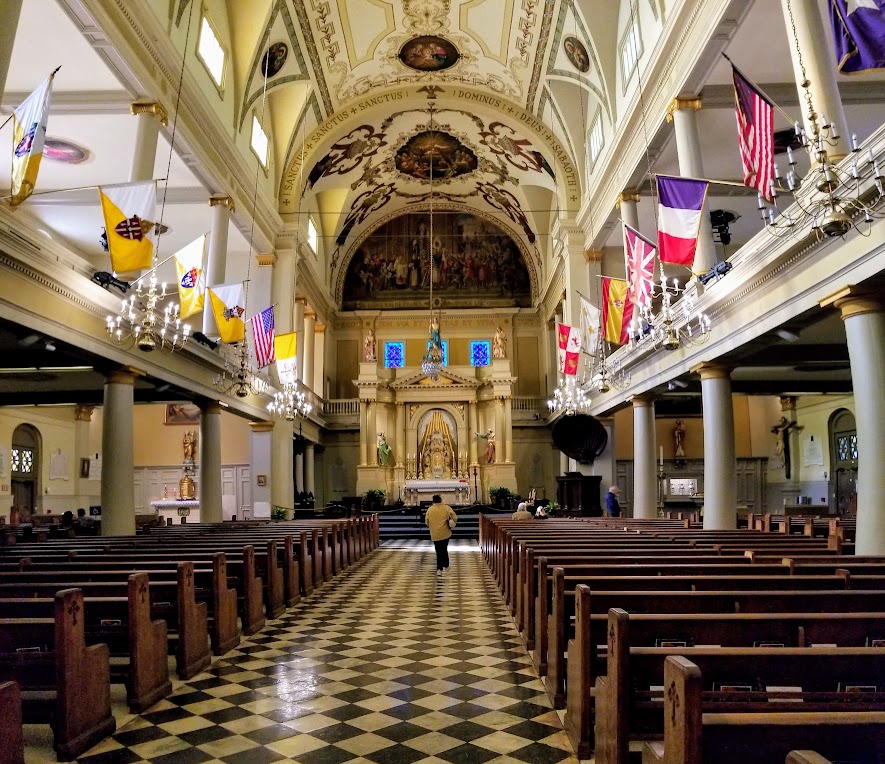 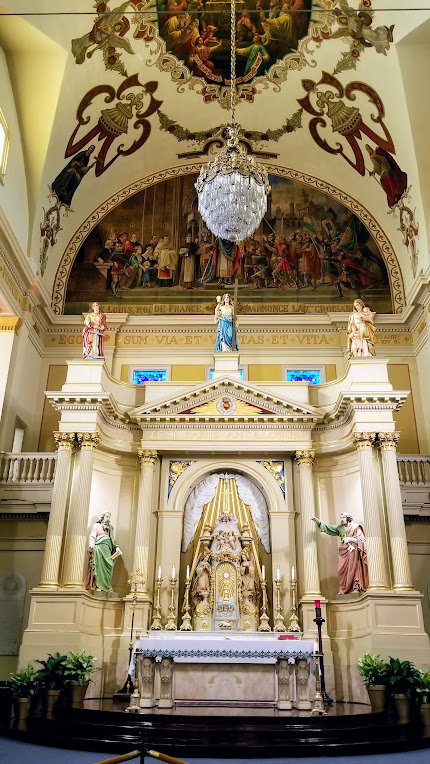 We stopped to listen to a docent giving a talk on the history of the cathedral, what repairs had been done over the years and what each of the flags represented. Those on the left indicate the many nations that have governed New Orleans from its beginnings to today, while the right side displays the religious governance of the Church, from the papal flag to its own basilican coat of arms. 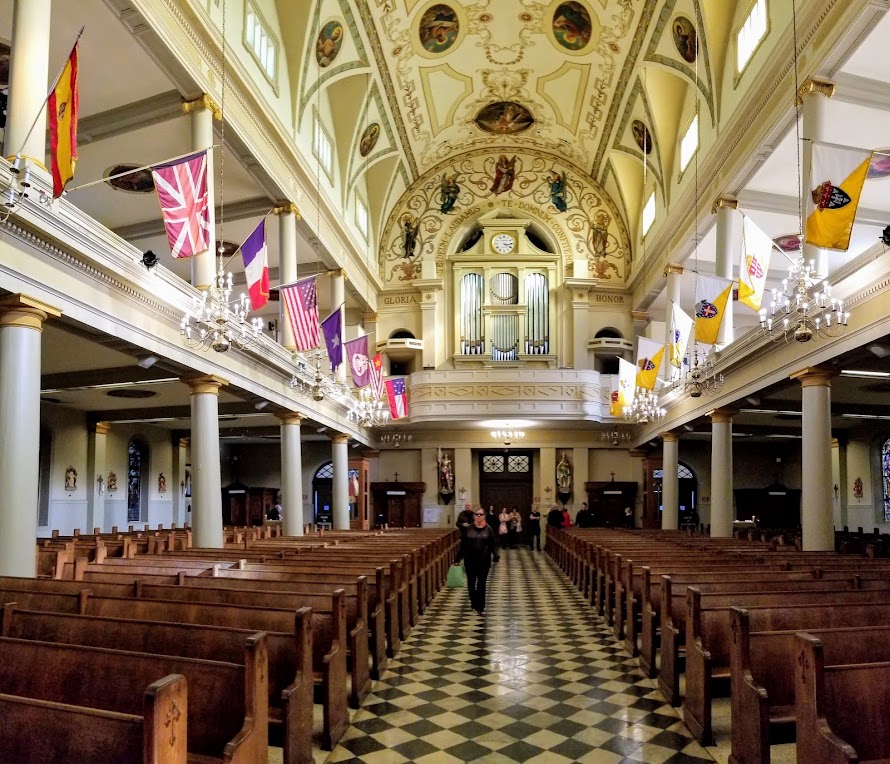 From there, we strolled along the Riverwalk where we sat for a bit watching the boat traffic until it was time to head back to Pontchartrain Landing. It certainly was an exhausting day! Be assured that our plans for the next two days promised to be just as exhausting! We’ll let you know how it went in the next post… 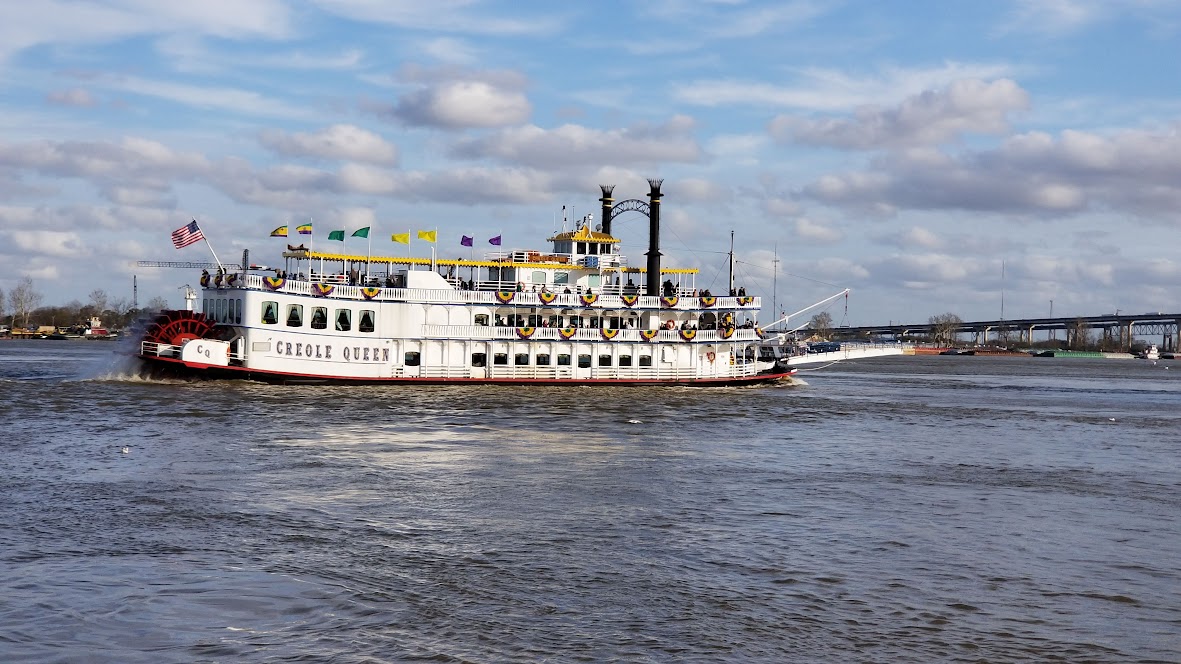