Leaving Augusta, GA behind, it would be a 2-1/2 hour fairly scenic (but showery) drive to bring us to our next destination, York County’s Ebenezer Park in Rock Hill, SC. 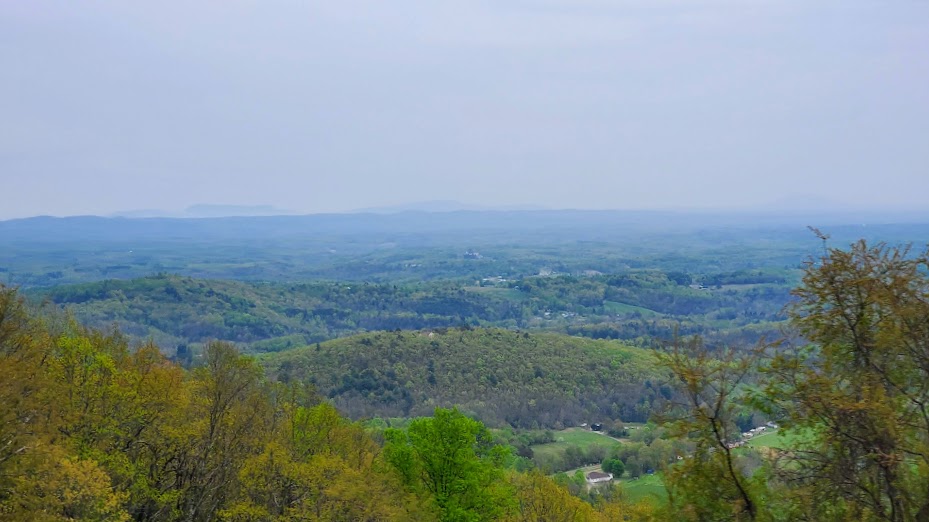 This 26 acre park is on the shores of Lake Wylie which borders both North and South Carolina. In addition to a wide variety of day use recreational opportunities including boating and fishing, the park also offers has 67 full hookup campsites year round for a daily rate of $31 per night. Be aware that they charge a $2.00 booking fee, an accommodation tax, a capital tax, a sales accommodations tax and a state sales tax so instead of $93 for three nights, our cost was $105. 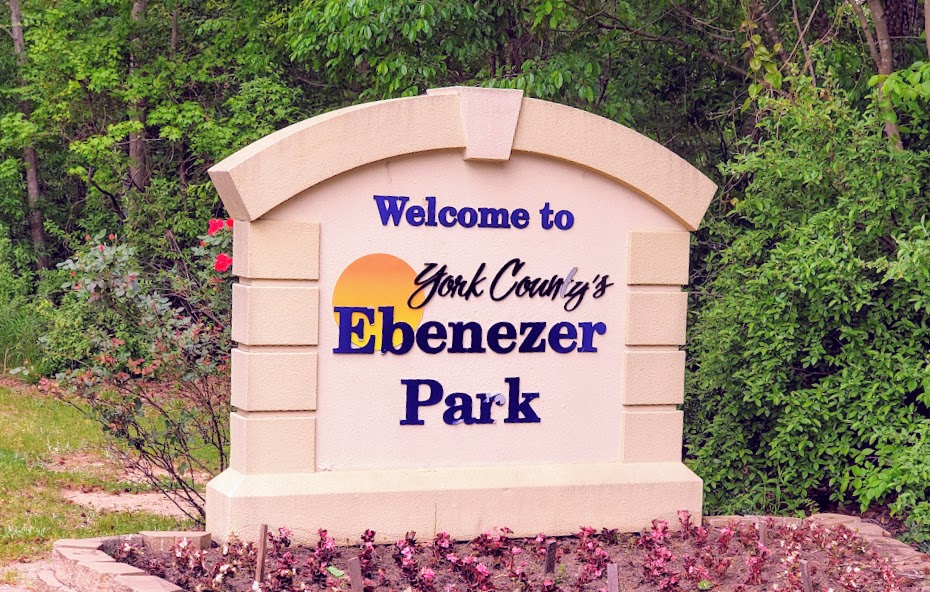 Since we made our reservation two days before our arrival, the choice of sites was somewhat limited – we reserved site #11 (see map here). Although the county park had gone through considerable upgrades to the recreation area (see the master plan) in the last few years, the campground remained untouched. The sites were dirt and in the case of our site, very unlevel, not only from front to back but from side to side as well creating a challenge for Rob to level the coach. 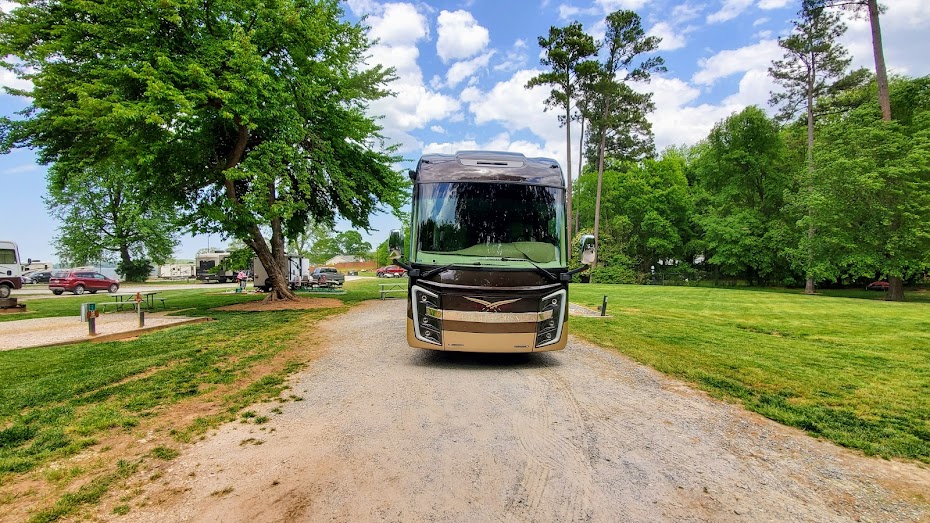 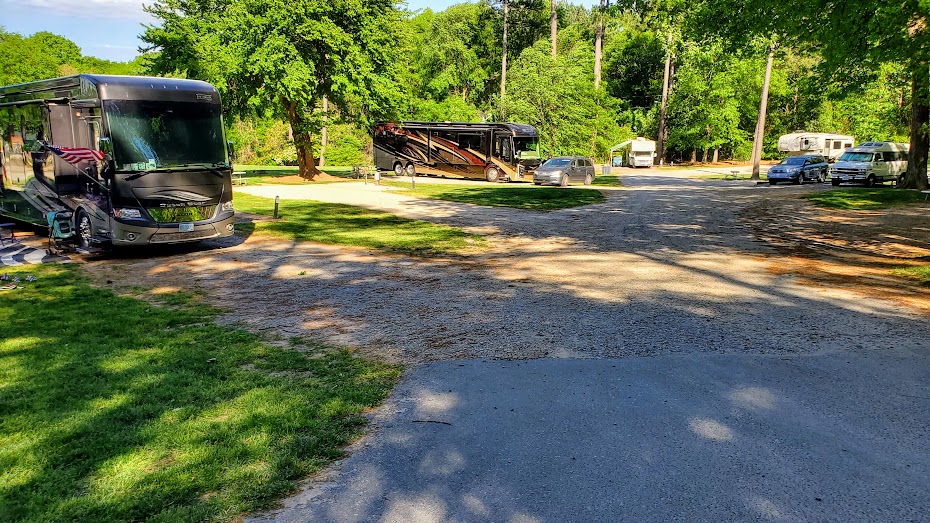 Our site was fairly large with plenty of space between us and our neighbors. It would have been nice to sit outside by a campfire but it was so windy and chilly it wasn’t conducive to being outside. However, we did take a walk down to the renovated part of the park. The circular pier as well as the other updates were quite impressive. 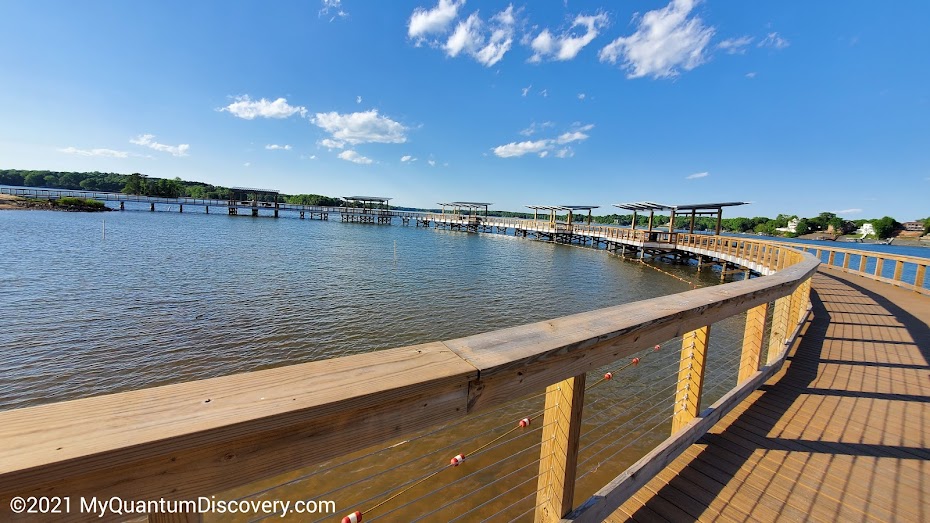 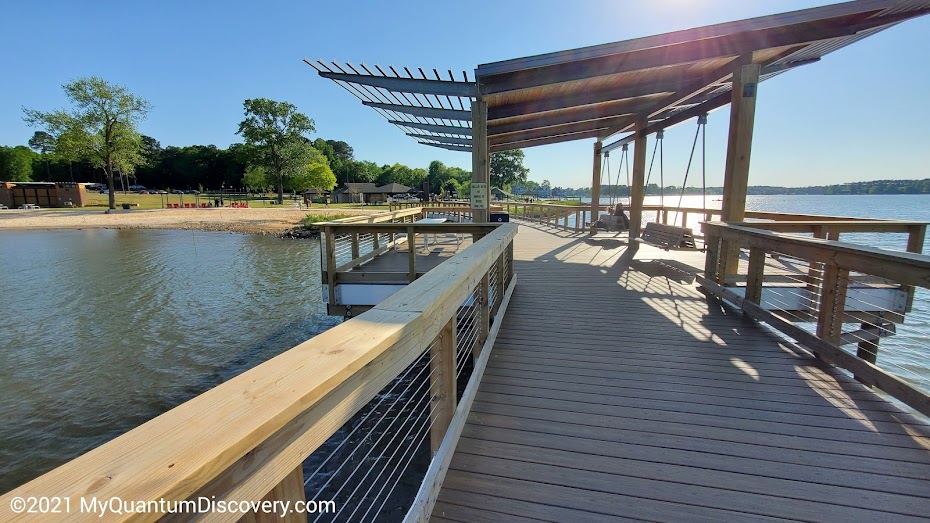 During our brief stay here, we drove over to see Wylie Dam in Fort Hill, SC. 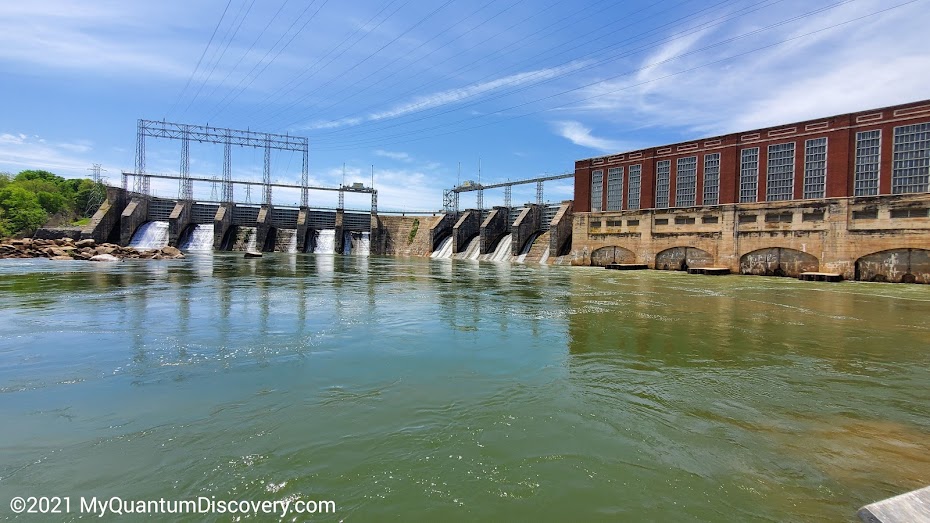 Near the parking lot was a path which we decided to follow. Sorry that we did! At the overlook to the dam, there was trash and broken glass. How disgusting (and unsafe)! 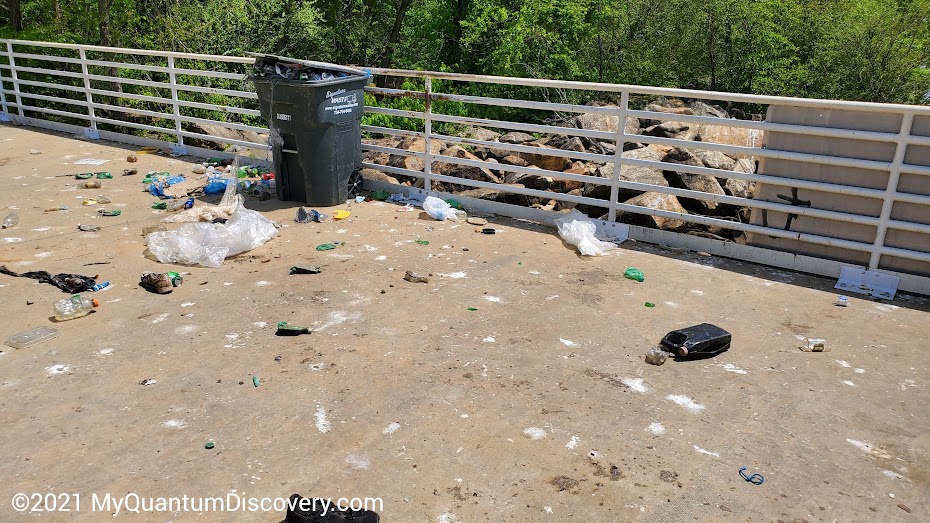 Our next stop was a very convenient, right off the highway, campground where we have stayed several times, Fort Chiswell RV Park in Max Meadows, VA. It was a quick overnight stay on a pull thru site. Rate is $40 (not including a 10% Good Sam discount). 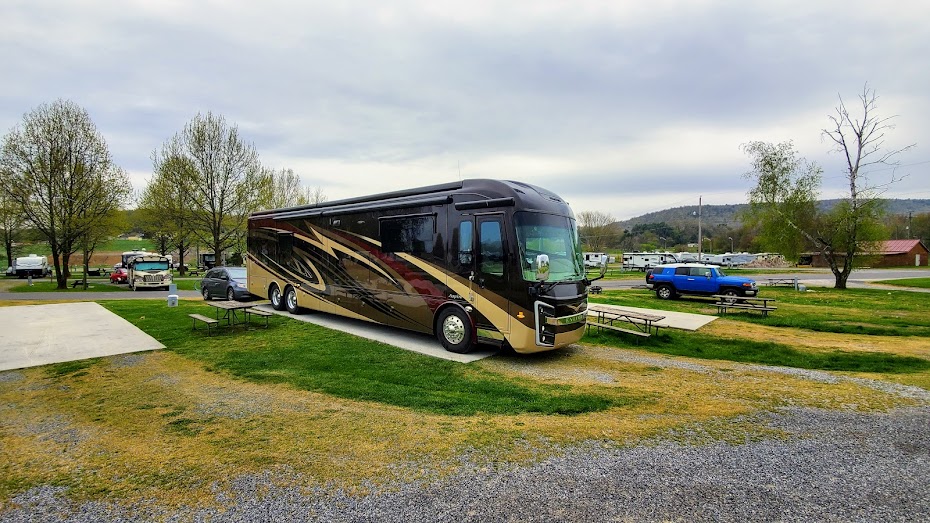 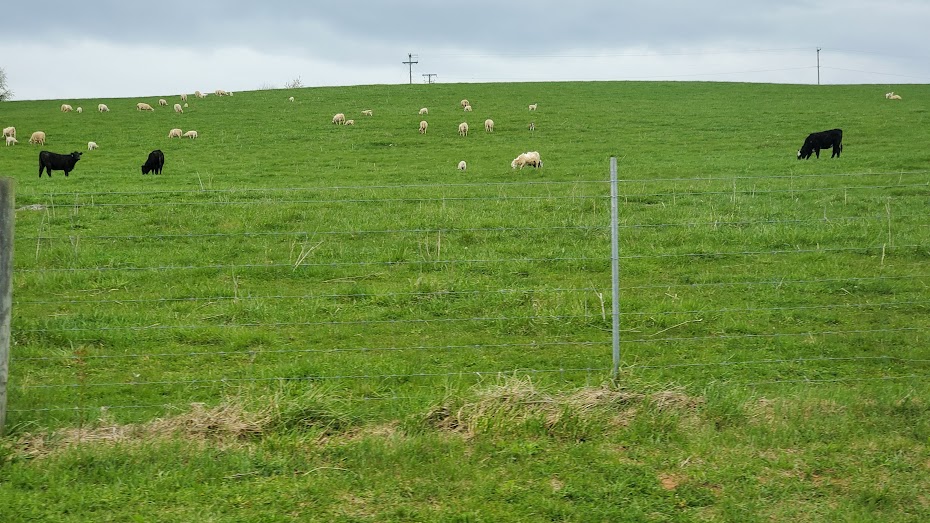 It was another repeat, quick, quiet one night stay in Mt. Jackson, VA at Shenandoah Family Campground. 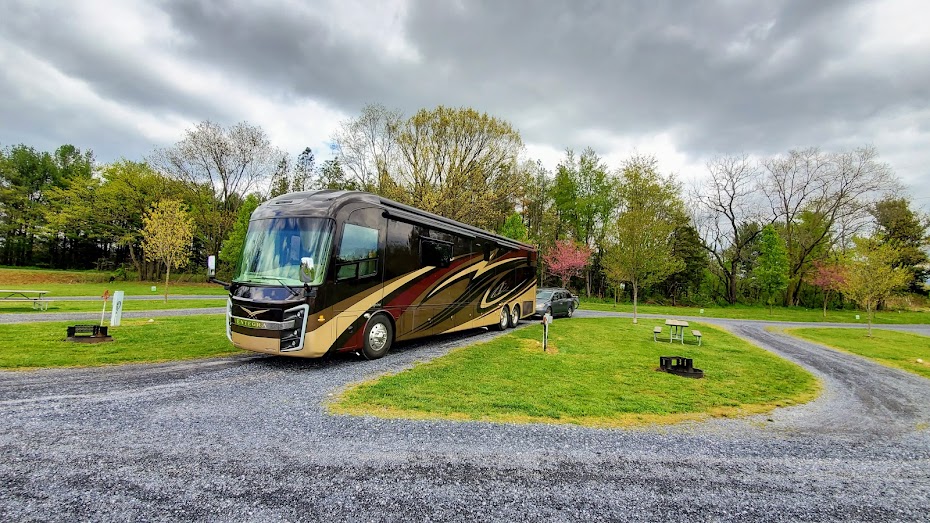 Our next stop was another familiar one, Twin Grove RV Resort & Cottages in Pine Grove, PA for a two night stay. 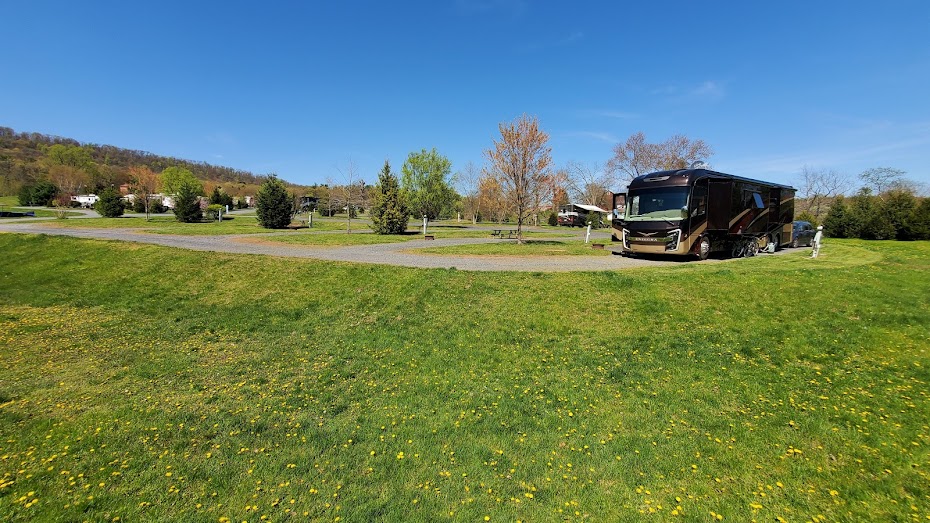 Except for ordering a take out meal of broasted chicken (it was just okay) at the nearby Jonestown KOA General Store, it was a quiet stay. 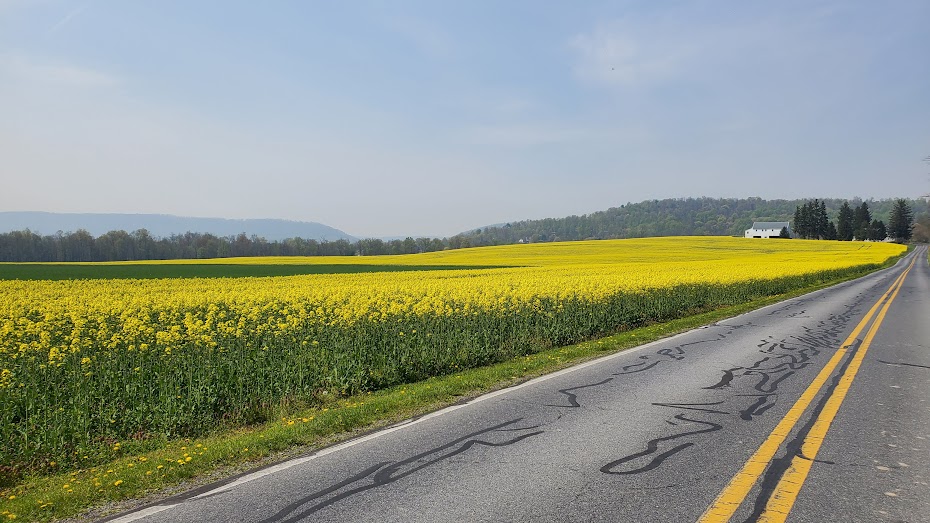 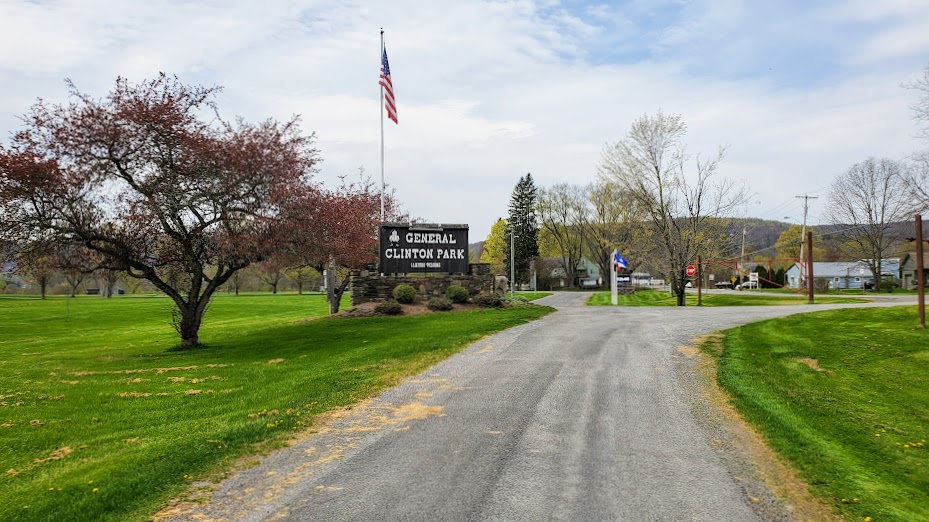 Our plan included stopping to see Rob’s Dad in Albany on our way home. Because the usual campground, Arrowhead Marina and RV Park in Scotia, NY that we stay at wouldn’t be open until May 2nd, we had to kill four days at our next stop, General Clinton Park in Bainbridge, NY. The park is named in honor of General James Clinton, who lead soldiers down the Susquehanna River from Cooperstown in 1779 as part of the Sullivan-Clinton Expedition during the Revolutionary War.

Reservations can be made on-line or by calling the Town Clerk’s Office (607-967-3781). Open from April 15 until November 1st, this park offers RV campsites and tent sites with electric and some with water for $30 a night; $15 a night with Passport America. Payments can be made on-line or by depositing your payment in the box upon arrival. Other amenities include a large enclosed pavilion with kitchen, two open shelters, two recently updated restrooms w/showers, one building with commercial kitchen, three little league baseball fields, a playground, a dumping station, a bandshell, a one mile walking path and a volleyball court. 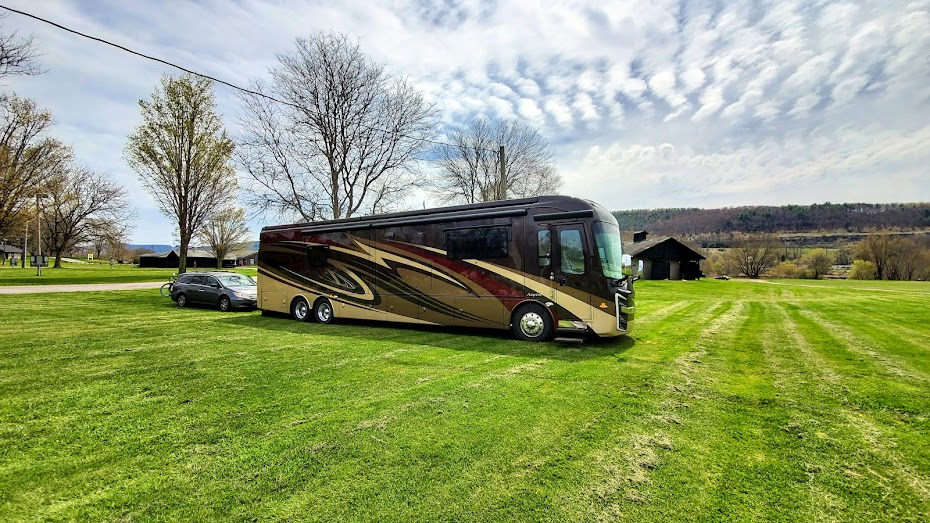 On the west end of the park there are well defined actual “sites”. Several RV’s were clustered there (see map here) – those sites were close together and due to vegetation at the back of the sites most would have been too short for us. However there are many more “sites” scattered among the grassy fields – think of a fairgrounds setup so we chose one of those where we had complete privacy. Most of these other sites have electric but water hookups are spread out and limited. As soon as we arrived, we were greeted by one of the Parks and Recreation employees (Gary?). Nice guy who told us  about the town and the park. 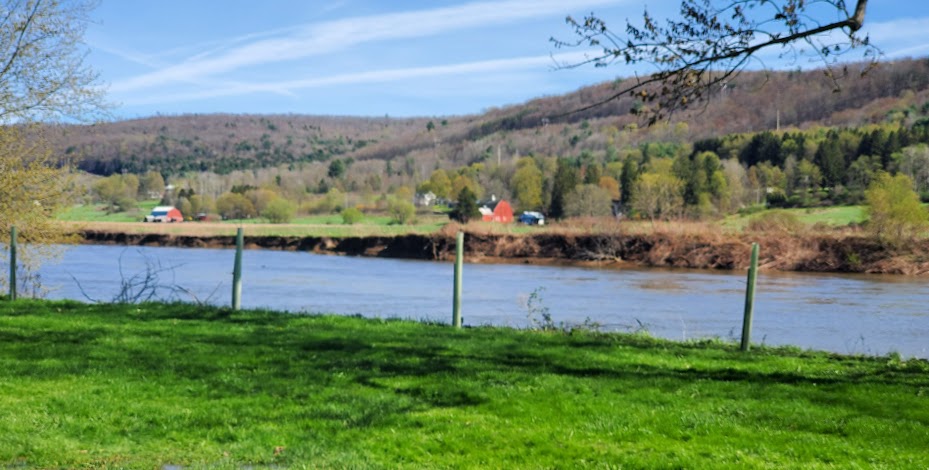 During our stay one rainy day, we visited the Pine Ridge Grocery, a bulk food store that is often found in Amish communities across the northeast. 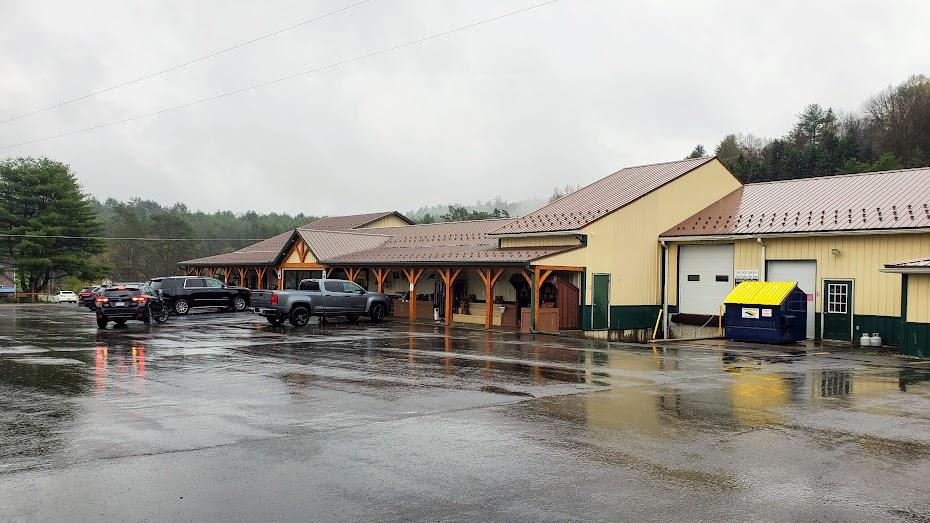 Fun walking up and down the aisles exploring all the products that they offered. Baking supplies, candy, snacks, local jams and jellies, deli meats, canning supplies and crafts – you name it, they seemed to have it.

Finally it was time to move on to our next destination, Arrowhead Marina and RV Park in Glenville, NY, about 30 minutes from where Rob’s Dad lives. During our stay, we had a nice, productive (he always has things that need fixing) visit with Dad, enjoyed a get together for dinner with Rob’s brother, Dave and his wife, Nancy and managed to squeeze in some time to visit Washington Park where their annual tulip festival was being held. 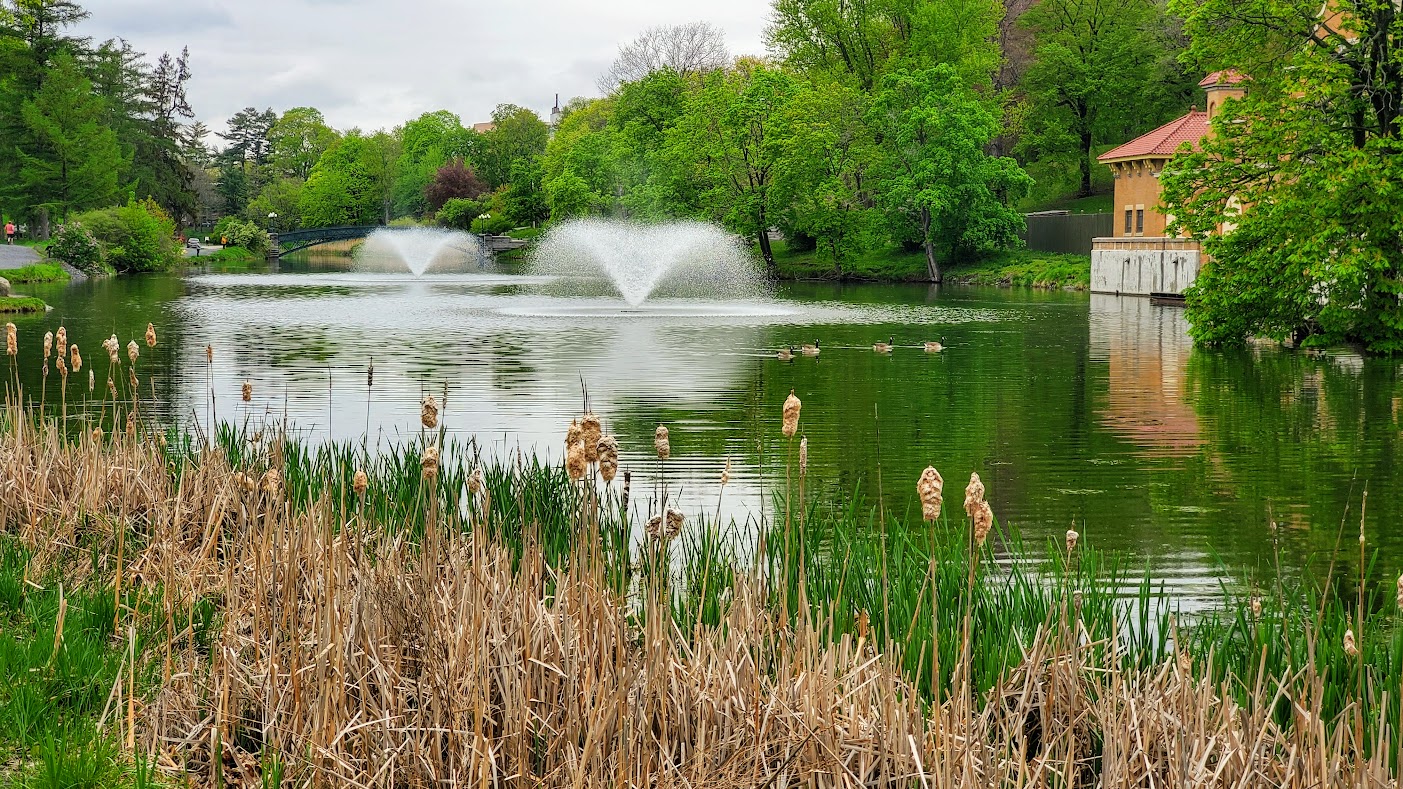 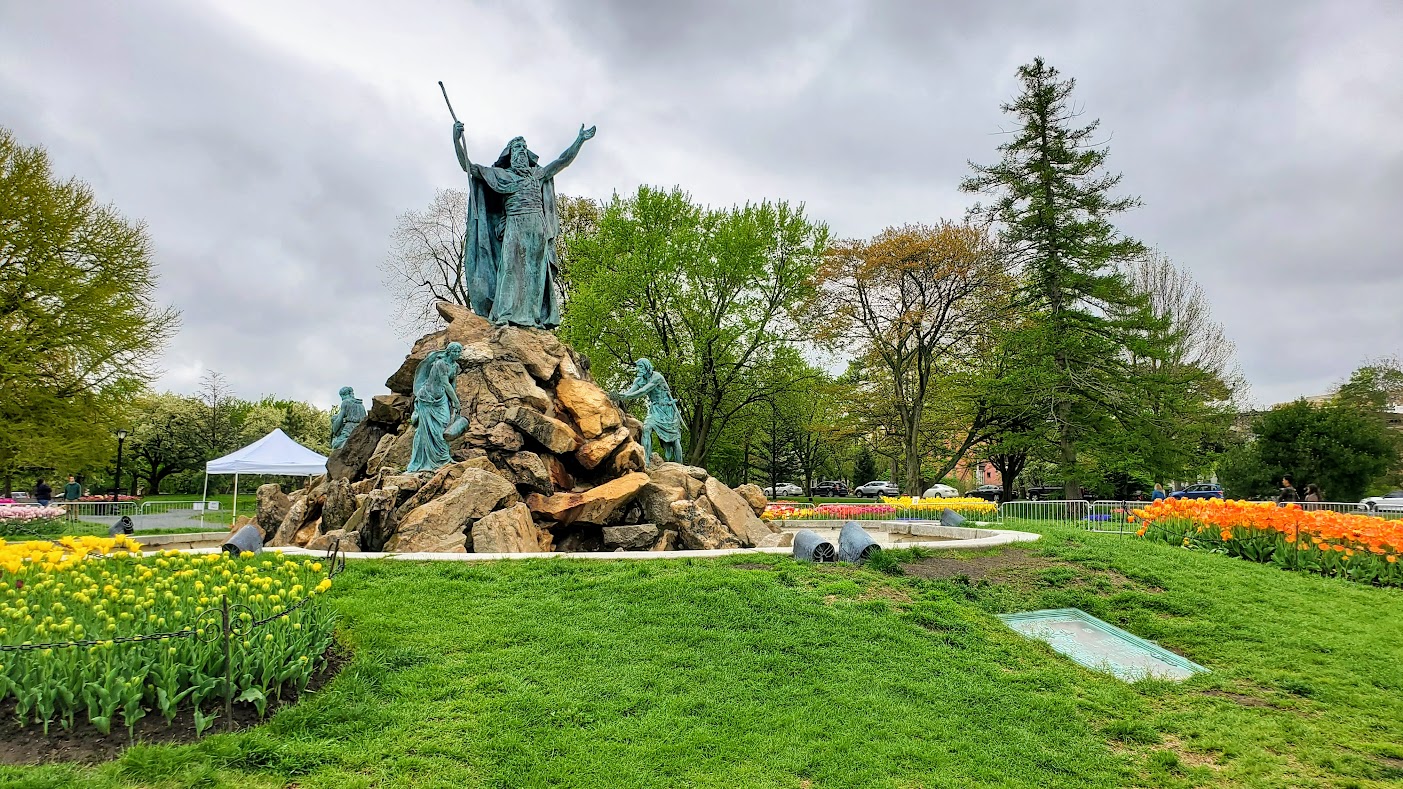 According to the Albany Institute of History and Art website:

“In 1947, Albany adopted the Dutch city of Nijmegen as a sister city and sent supplies to help rebuild the war-ravaged city. In return, Nijmegen sent thousands of tulip bulbs to Albany, which in 1948 Mayor Erastus Corning proclaimed Albany’s official flower. He sent a request to Queen Wilhemina of the Netherlands to name a variety of the flower as Albany’s tulip. The Queen selected Orange Wonder, a bronzy orange and shaded scarlet variety.”

Even though it wasn’t the best of days weather wise (it had rained earlier in the day), the bright colors of the tulips were dazzling as you can see from the photos below. I don’t think I’ve ever seen so many varieties of tulips in one place before! 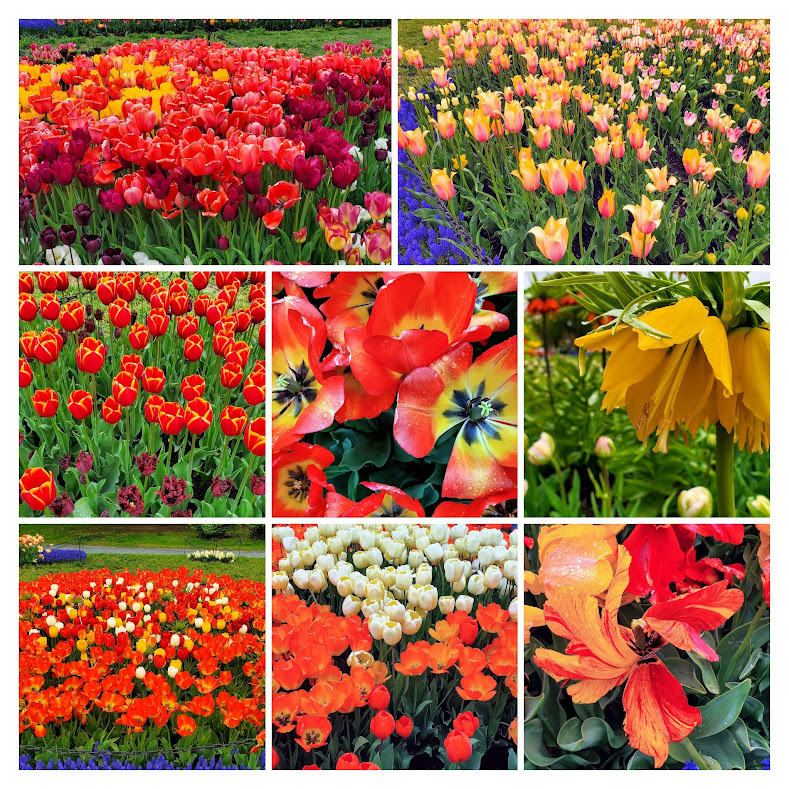 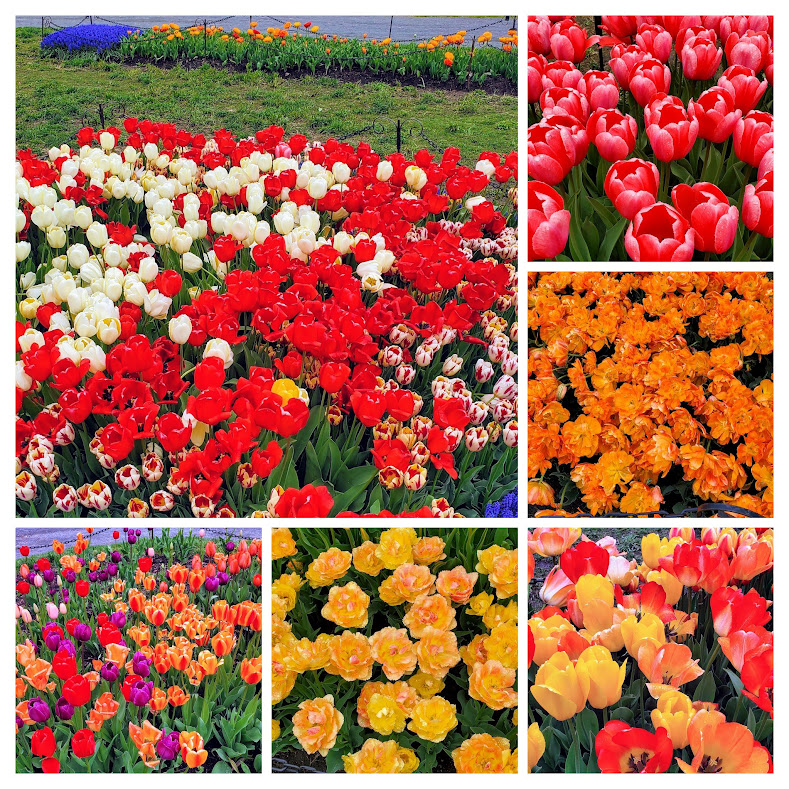 The next day we would complete the final leg of our 2020-2021 winter sojourn, a three hour drive to RI.  Time to shift gears from RV’ing to boating!