The summer of 2021 in RI. A summer of high heat, humidity and rain with one of the third wettest Julys in RI since 1872 (1921 was the wettest; 1938 the second). A summer of two tropical storms named Henri and Ida pelting the east coast causing high winds, flooding and power outages throughout the state.

And another summer of the never ending Coronavirus pandemic even though there was a short-lived moment of hope at the end of spring/beginning of summer when infection rates dropped and mandates and masks restriction were lifted, allowing everyone to enjoy a local restaurant and get togethers with families and friends. Then the Delta strain struck sending the infection rate soaring once again.

Regardless of all that, it was, as always, exciting that the boating season was on the horizon! Woo hoo! Once again our heads were filled with our usual annual dreams of a summer filled with cruises to Newport, other favorite spots or just hanging out on our mooring. But before we could go sailing on the seven seas, we first had to don our boating hats, bring out the bottles of cleaner and cans of wax, the dreaded $240 can of bottom paint (alas Rob’s least favorite job) and everything else that we needed to prep Quantum Leap for launch. Fortunately the weather cooperated. By the end of May, we were ready! 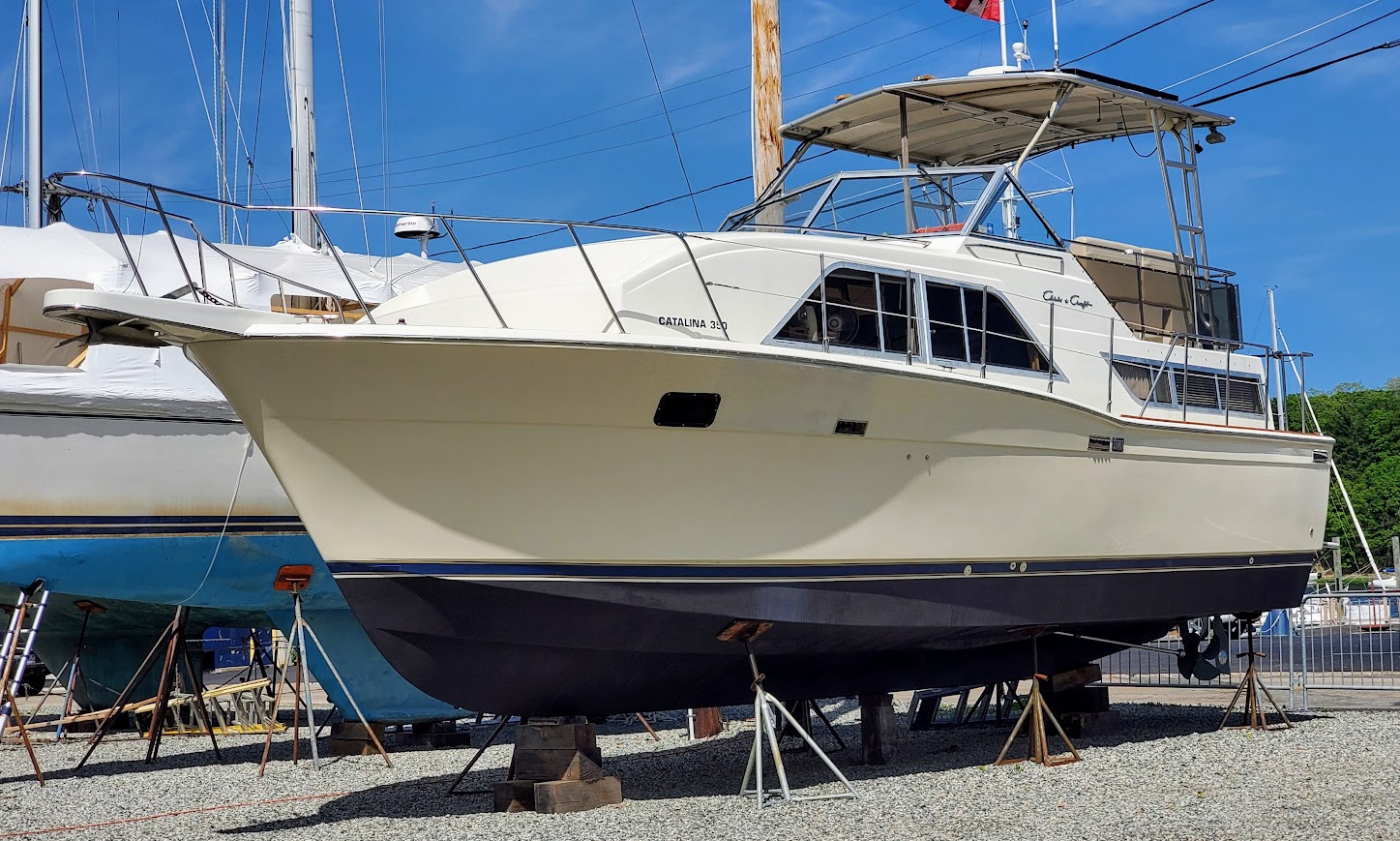 Fortunately it was a bright sunny day for our launch. Thanks to the club stewards, dockhands and volunteer members, everything went smoothly.

Before we could move on board, a lot had to happen, due primarily to the installation of the newly rebuilt Onan generator over the winter. Rob once again had his work cut out for him. The main door which had been removed to allow the mechanic to hoist the generator into the main salon had to be reinstalled. AC ducts had to be moved, new wiring installed, floorboard framing rebuilt, new floorboards cut and painted, etc. 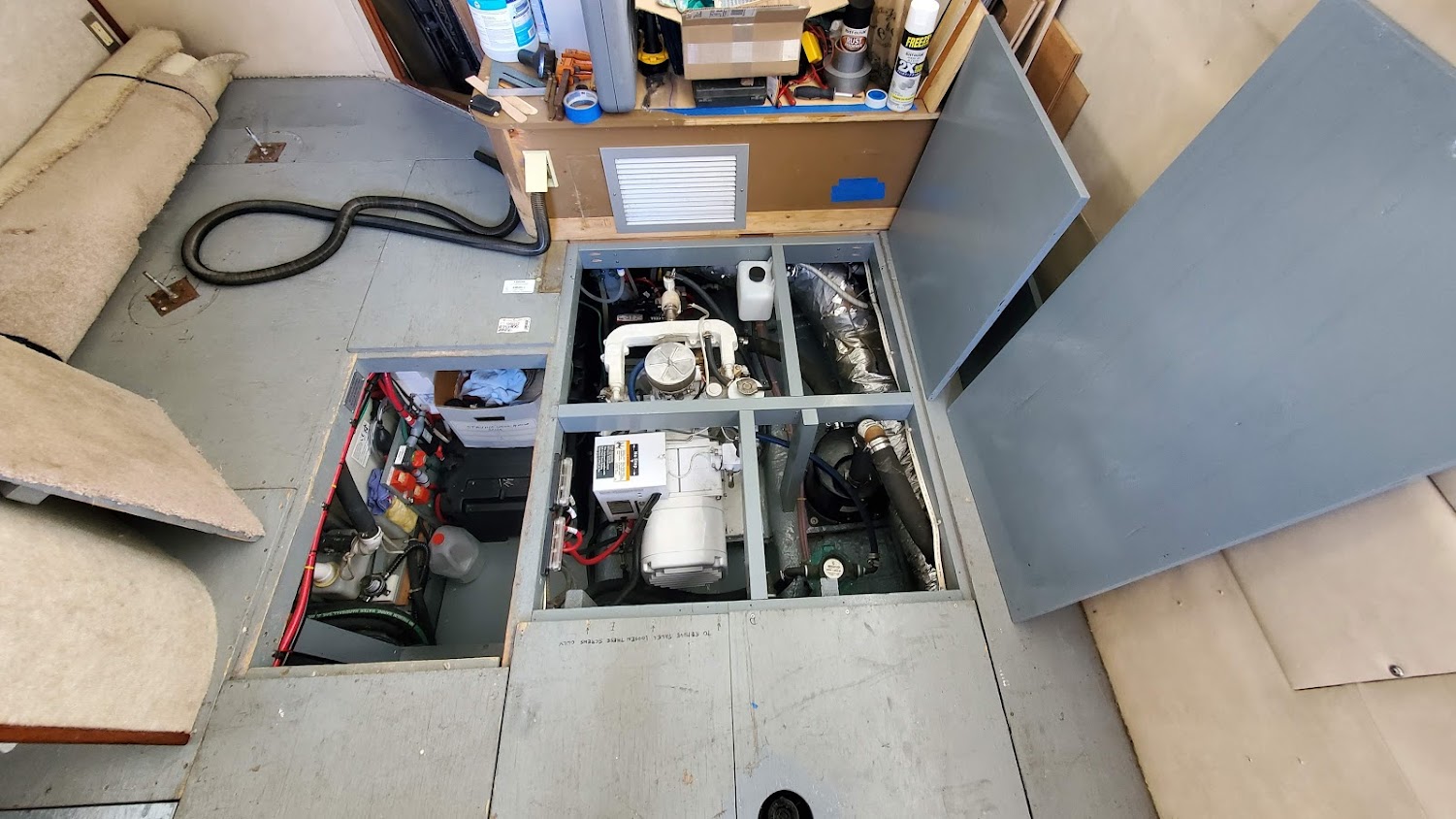 The good news is that Rob finally finished all the mods, the bad news is that although the generator started right up, after running for a minute or two it would overheat. After working countless hours on the phone with the eBay seller, Gary, who has refurbished over 150 units, the issue still wasn’t resolved despite trying a number of potential solutions to the problem.

Although we can easily do without running the microwave, hair dryer, etc. when we are away from our slip, we would have no hot water if we stayed on a mooring more than a day. So that squashed any thoughts we had of cruising to Newport or anywhere else during the summer. Good news though, before the summer was over, the generator was finally fixed, thanks to a de-scaler that Gary had sent. Apparently there was some serious scale buildup in the manifolds and/or heat exchanger which was causing the problem.

In the meantime, we had ordered new Euro style recliners from RecPro, a company that specializes in everything for RV’s and boats. Since we don’t have a lot of room in the salon, we needed the footprint of the new chairs to be relatively small, not the gargantuan overstuffed types found in a typical furniture store. 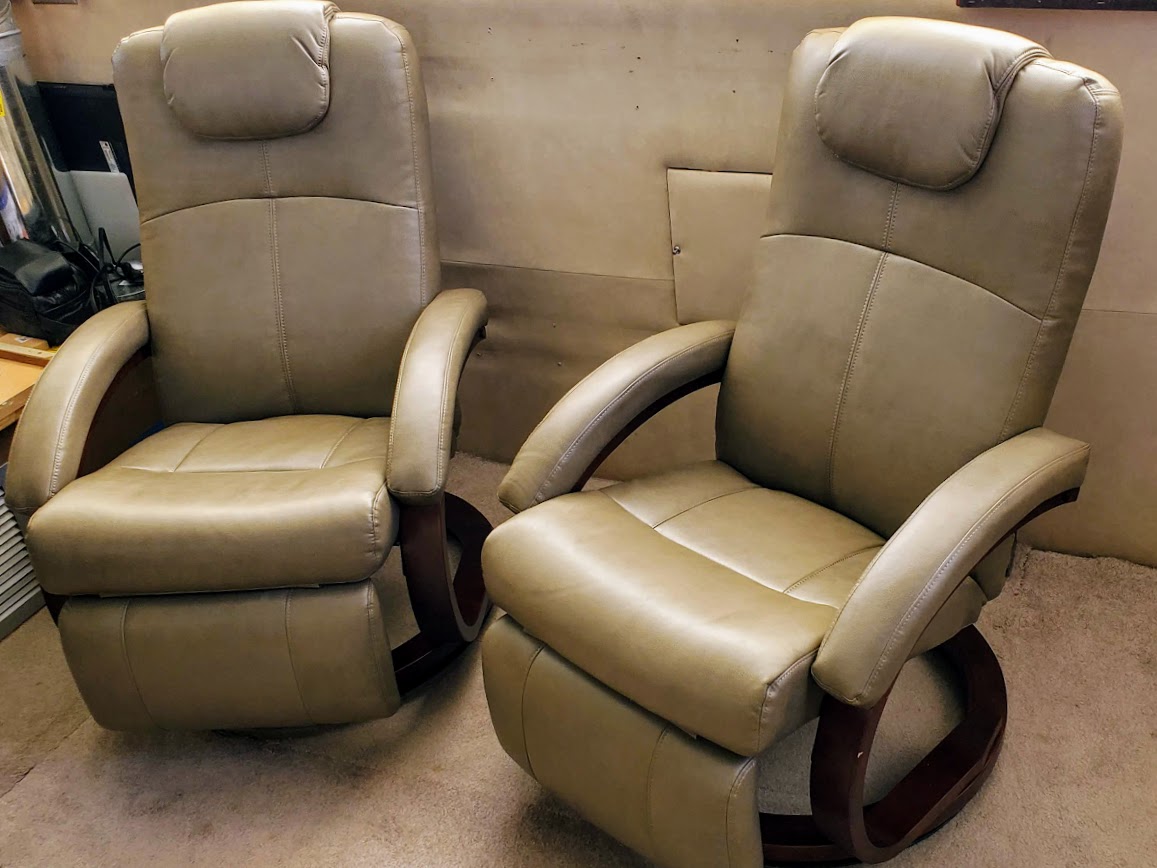 Before receiving the chairs, Rob had to fit, install and seam pieces of leftover matching carpet that we had on hand to cover the bare sections of the floor which were exposed when we removed the old settee several years ago. Job well done!

Once all that was done it was finally time to take what seems like half the contents of the coach and move on board the boat.

Nothing more relaxing than being on the water full time (even in the rain and storms)! But maybe we’re a bit spoiled by all the amenities we have aboard the coach. We can easily deal with not having four TV’s (our water palace has two), the electric fireplace and not having a washer and a dryer (not a big deal since we can just lug what needs to be washed to the coach each week). But the one thing that we both miss is not having a dishwasher. I miss it because I don’t like doing dishes multiple times a day (yes we could use paper plates but that’s not very ecofriendly) and Rob misses having one because of the massive amount of water that is used by hand washing. Yep, Google it, the average handwasher uses 15-30 gallons, our Fisher-Paykel on the coach can wash two days worth of dinnerware and uses only only 2 gallons! Plus it does a much better job and sanitizes to boot! 2 gallons equals one minute of running the faucet – sorry there is just no way a hand-washer will ever outperform a dishwasher in any way, shape or form.

Using a lot of water is not a big deal at the dock, but using significant amounts of water is a big deal when on a mooring and access to water to fill up our 130 gallon tank is not always available. So to solve the problem, after hours of research, Rob purchased an early Christmas present – a Hava Compact Countertop Dishwasher. Woo hoo! Initially it sat on the top of our counter but eventually Rob tore out existing cabinetry, expanding the depth so the dishwasher would fit. He had planned to finish the cabinet by adding new shelving giving me a lot more storage, but due to other projects and some medical issues that never happened. 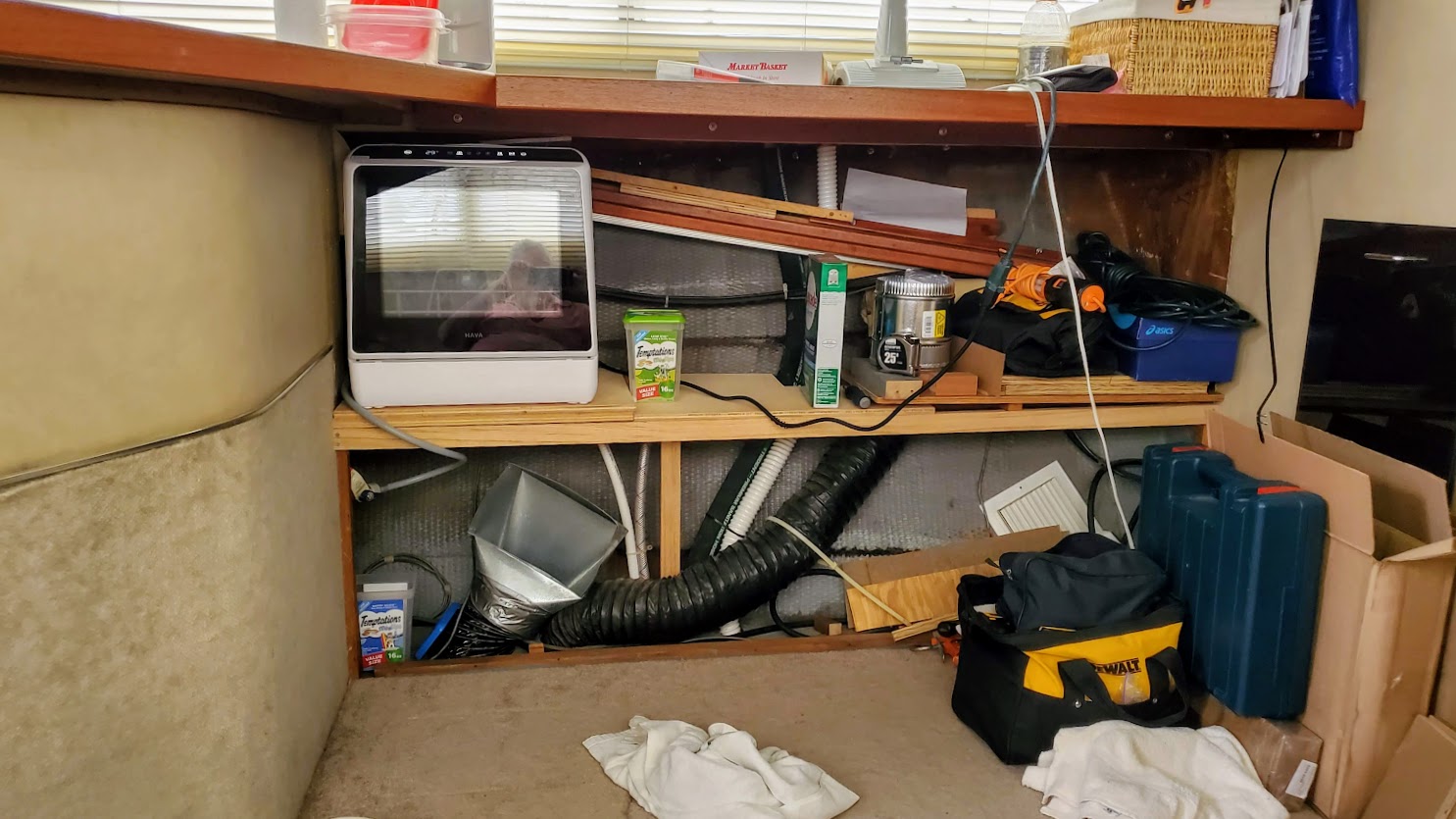 In the meantime, our 2013 Honda Odyssey was beginning to show signs of its age, stimulating a debate – do we start investing money for repairs or do we bite the bullet and buy a new vehicle? Over the past few years, the number of vehicles that can be flat towed (4 wheels on the ground) behind our coach has dwindled considerably. After doing a lot of research, Rob decided perhaps we should check out the new Jeep Grand Cherokee L Overland (The L is a new model for Jeep). Visiting a local dealer, Paul Bailey’s Motors, we were able to test drive a Limited Jeep model since they did not have the Overland in stock, but the Limited is not flat towable. On the promise that it would be available to us prior to our departure in October, we ordered one. We took delivery on August 23rd. If you are actively looking to purchase a new vehicle, we highly recommend this dealership. Totally love this vehicle! 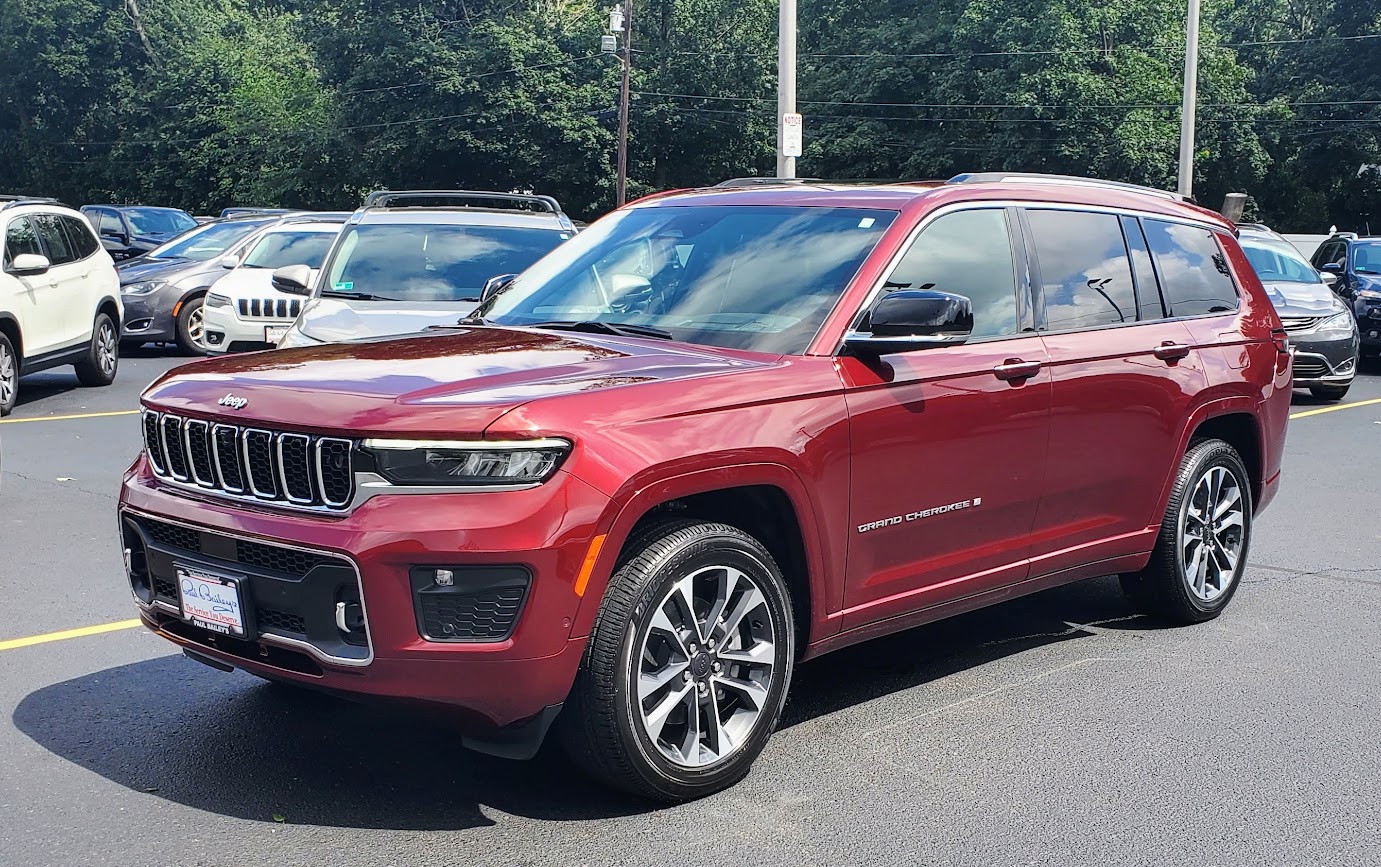 During the time that Rob was researching the purchase of a new vehicle, he was also researching how to sell our 2013 Honda Odyssey. The dealer had offered us $9K as a trade-in. An online quote from Carvana quoted us $17K! Now that’s a no brainer! 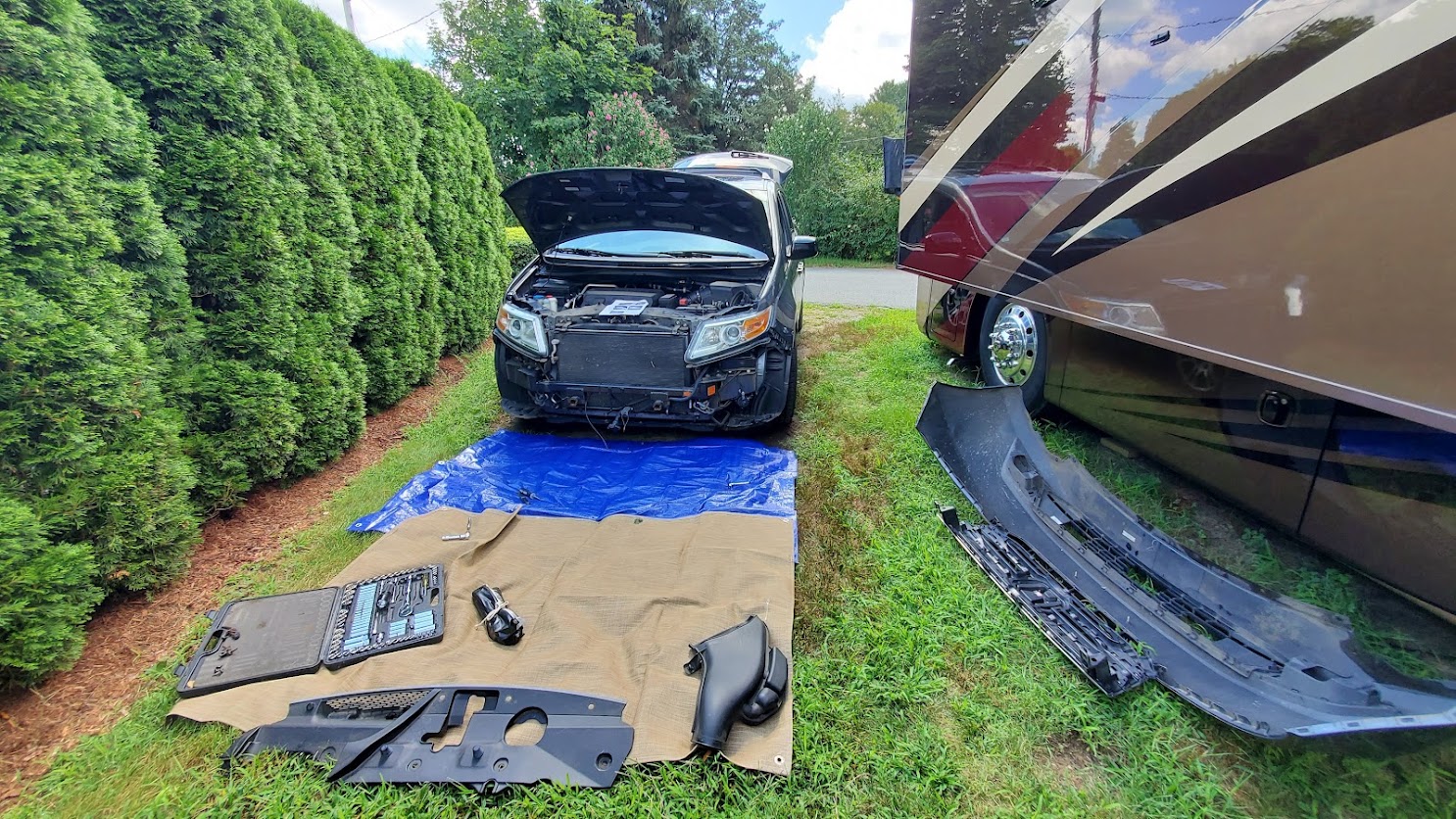 On August 29th, after a week of our washing, waxing, cleaning and removing the towing equipment on the Odyssey (it looked real good!), Carvana came to Sun Valley and after a very quick inspection of our van, handed us a check, loaded the van onto their truck and drove off. Wow, just like the commercials!

Fortunately Rob had been in contact with Roadmaster and BlueOx in the hopes that one of them would have a baseplate (towing gear that is installed on the front of the vehicle) for the new Jeep available before we were planning to leave. Since the Jeep GC-L was a brand new model for 2021, it takes several months for a baseplate to be developed. Luckily Rob was offered one of the first production units from Roadmaster, but the BlueOx would not be available for a couple more months.

Once the new baseplate arrived Rob was able to spend a couple of days installing it plus an air powered supplemental braking system and making the necessary electrical connections for the turn signals and brake lights. More about that in a future post. 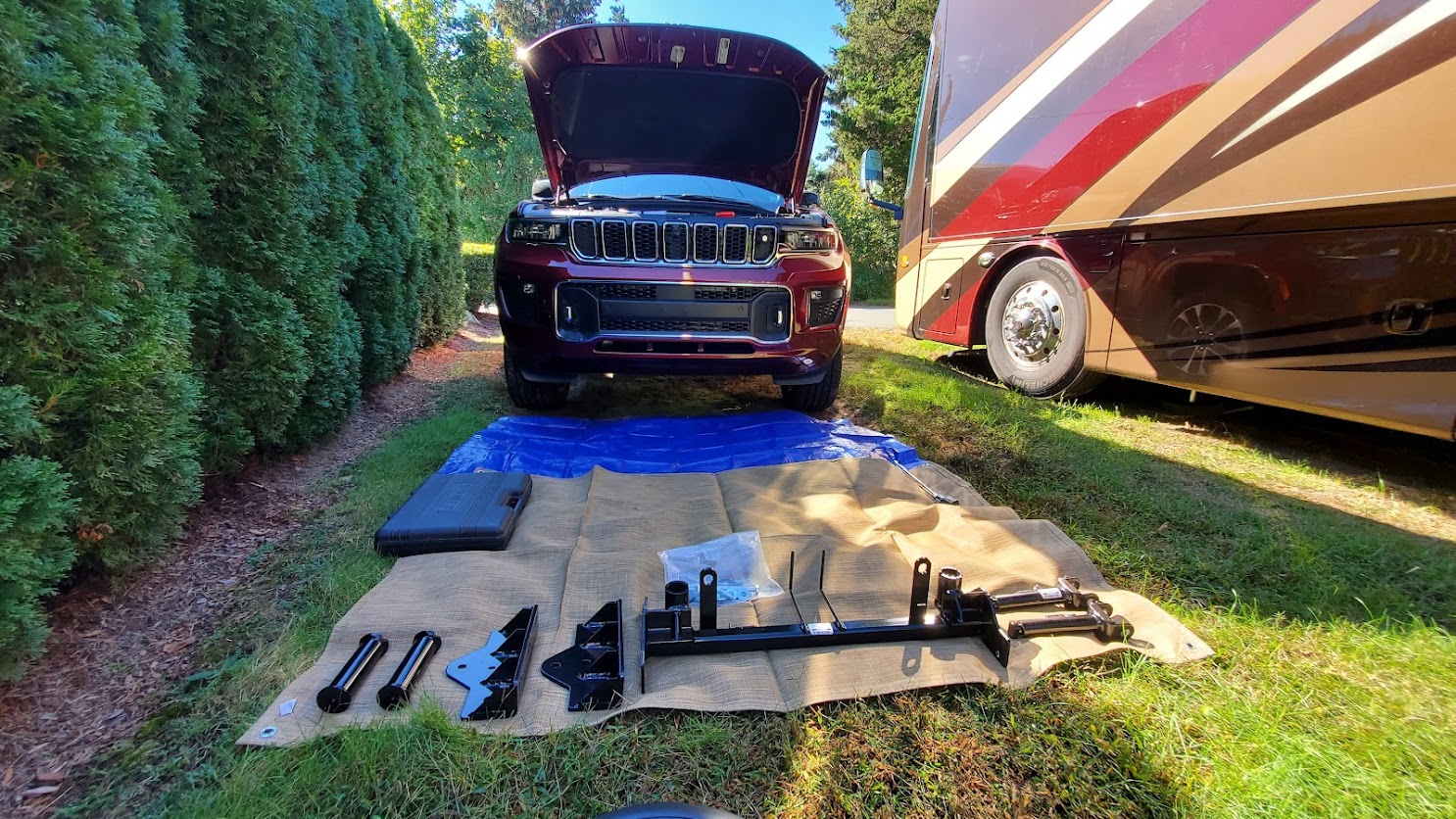 Staying on board Quantum Leap paused for a couple of weeks towards the end of August when Tropical Storm Henri became a hurricane, threatening the East Coast with powerful winds, rainfall and storm surge. Time to evacuate! Luckily before it hit, it was downgraded, although it was still a pretty powerful storm which did the most damage along the south western coastal areas of RI. Our area experienced power outages, downed trees and some flooding and it did get a little bouncy at the Marina as shown by our on board webcams.

Once Henri bid us adieu, we decided not to move back aboard when the local meteorologists started talking about Hurricane Ida, which thankfully turned out to be a mostly rain event. Tough though for the people in Western RI who still were without power from Henri!

In the midst of all this and numerous medical appointments, we did manage a few fun activities. Escaping several times from our slip at the dock to enjoy the peacefulness of our mooring…. 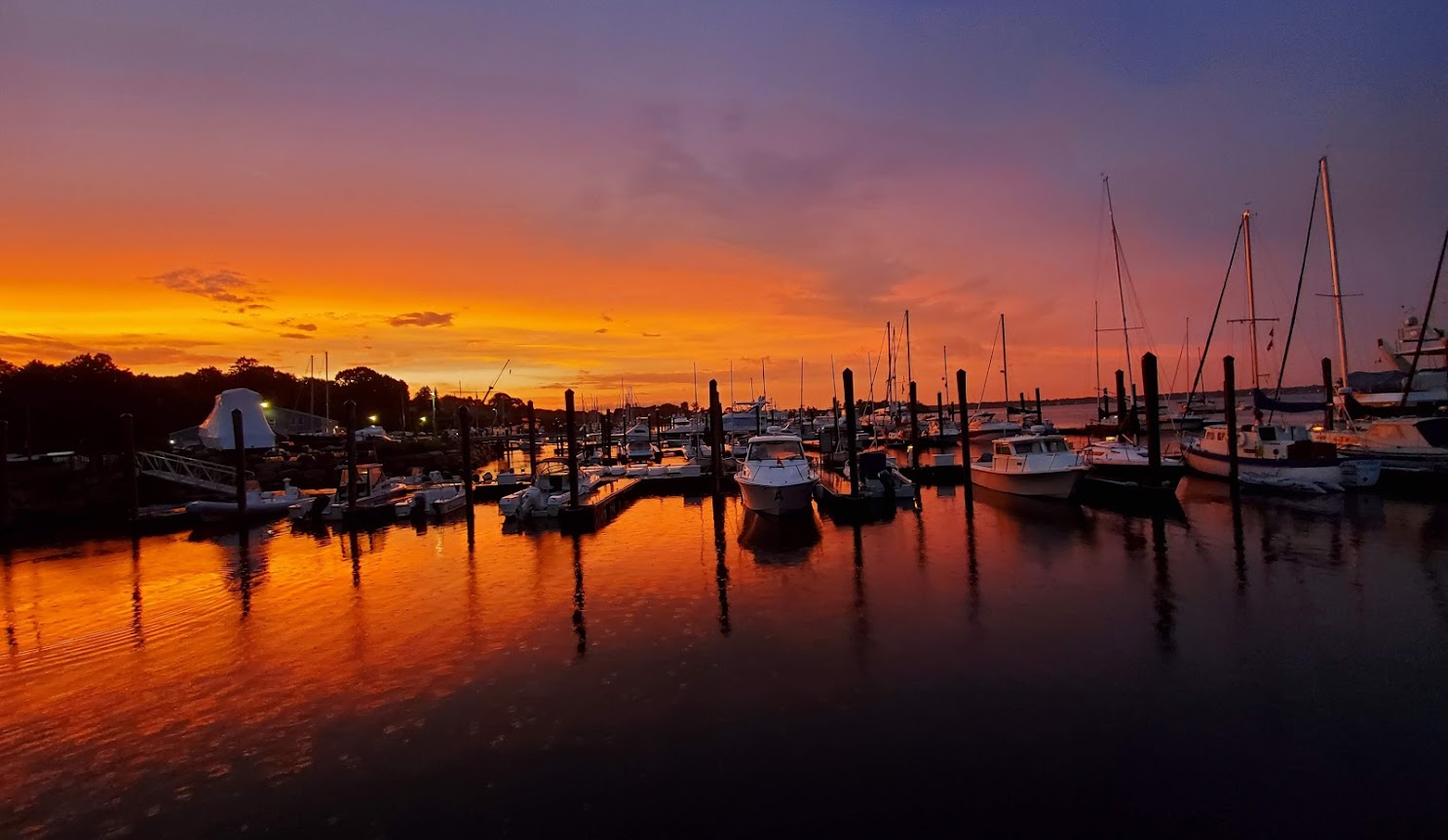 …Visiting Rob’s brother, Jeff and his family from Chicago who were vacationing for a week in Narragansett, RI. 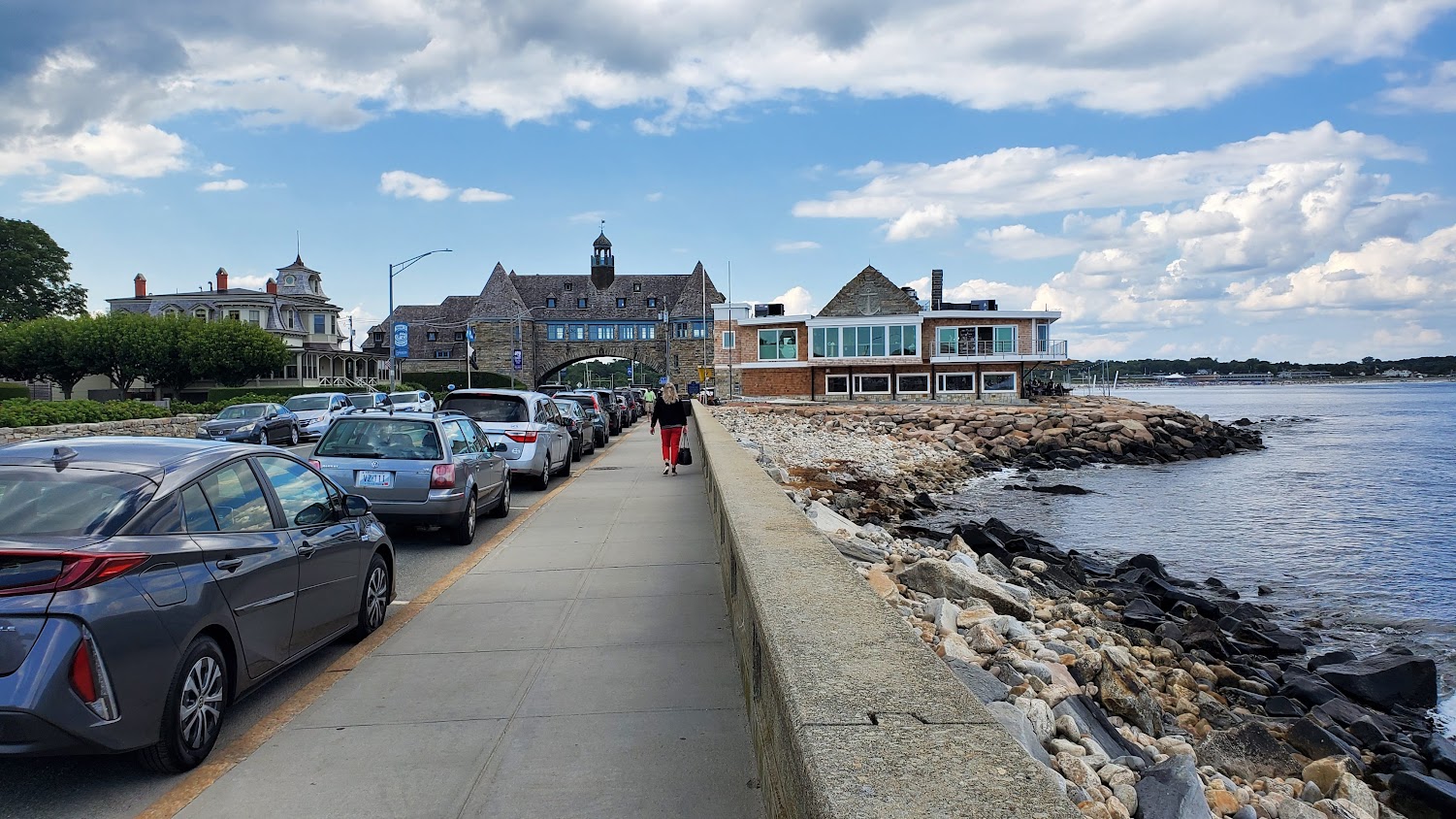 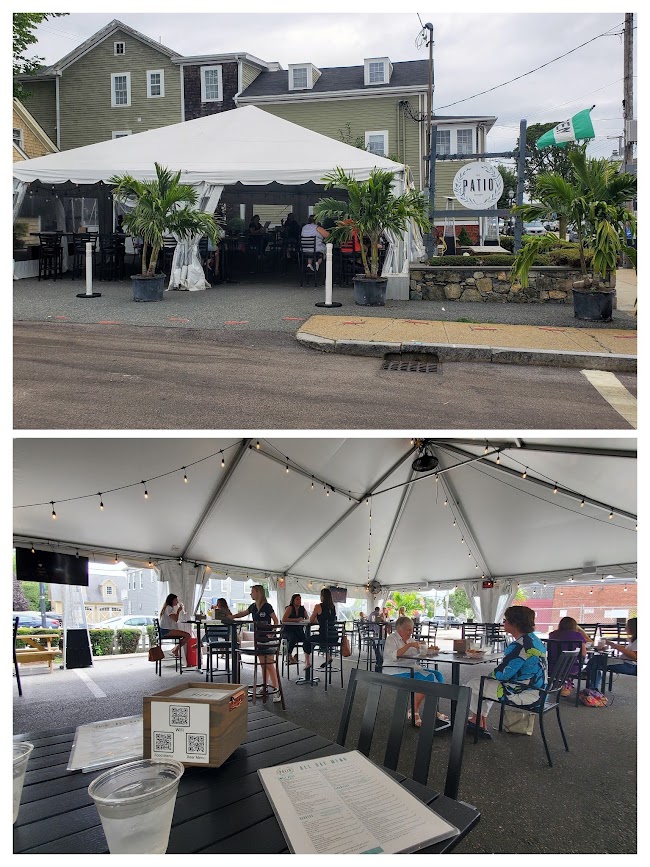 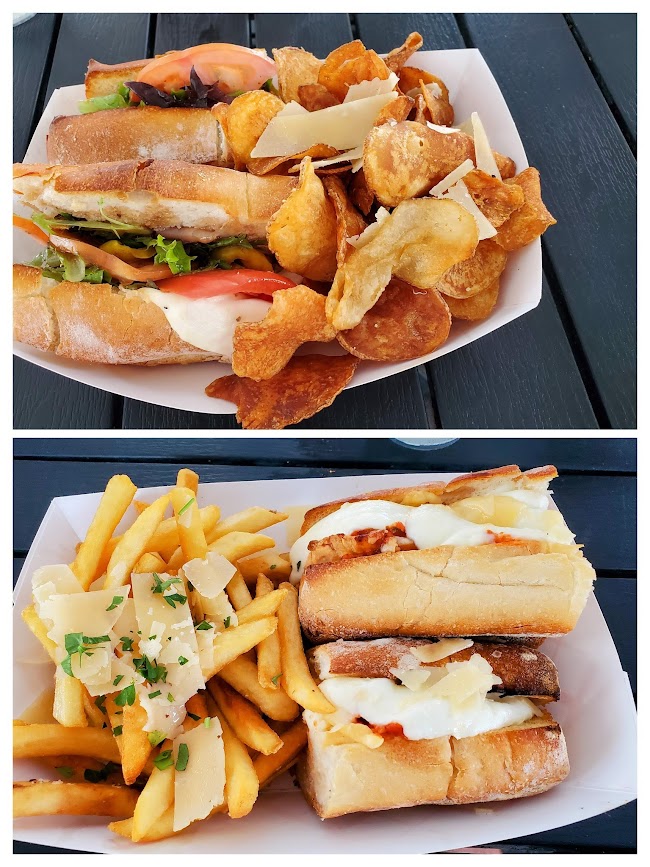 …Dinner at one of our favorites, Ritrovo Pub & Grill in East Greenwich. 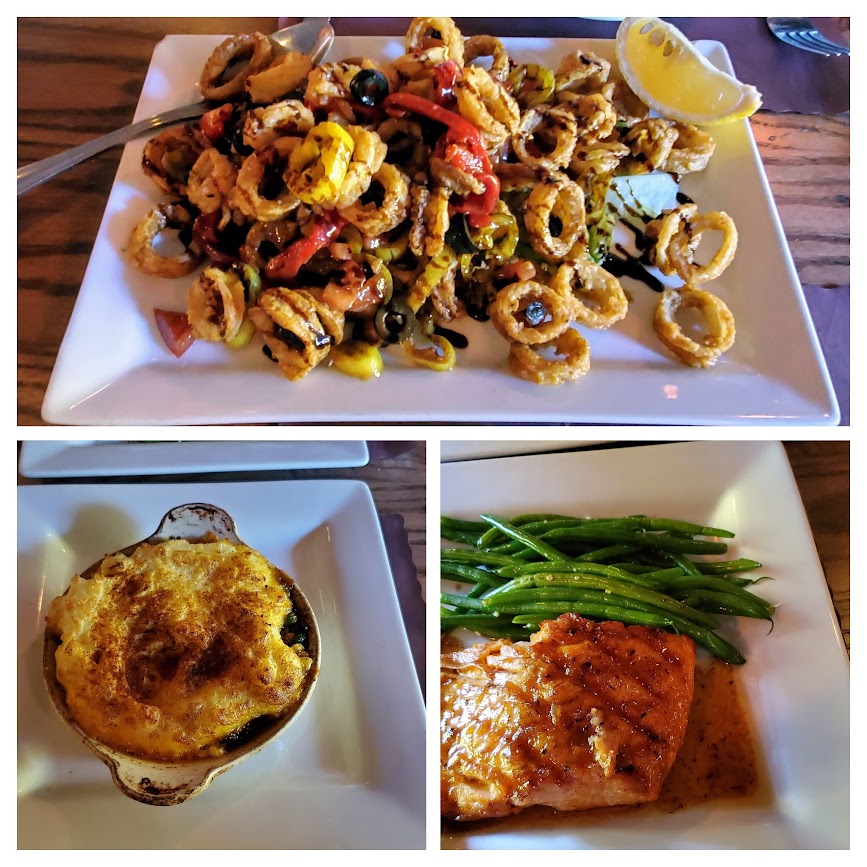 …And a bit of Southern flair at Dante’s Kitchen on Main Street in East Greenwich. 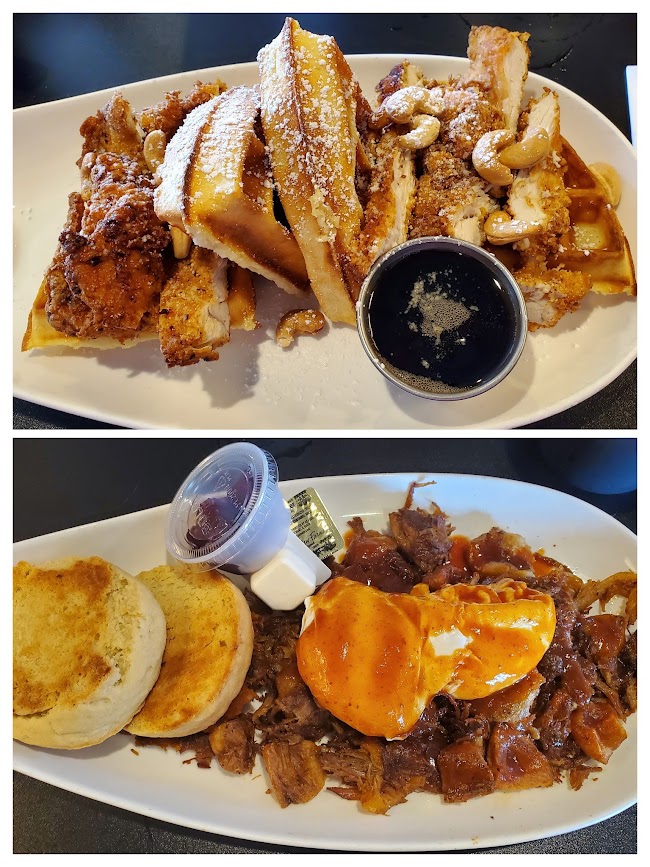 Because Quantum Leap was scheduled to be hauled on October 8th, we originally planned to depart from RI on October 13th. 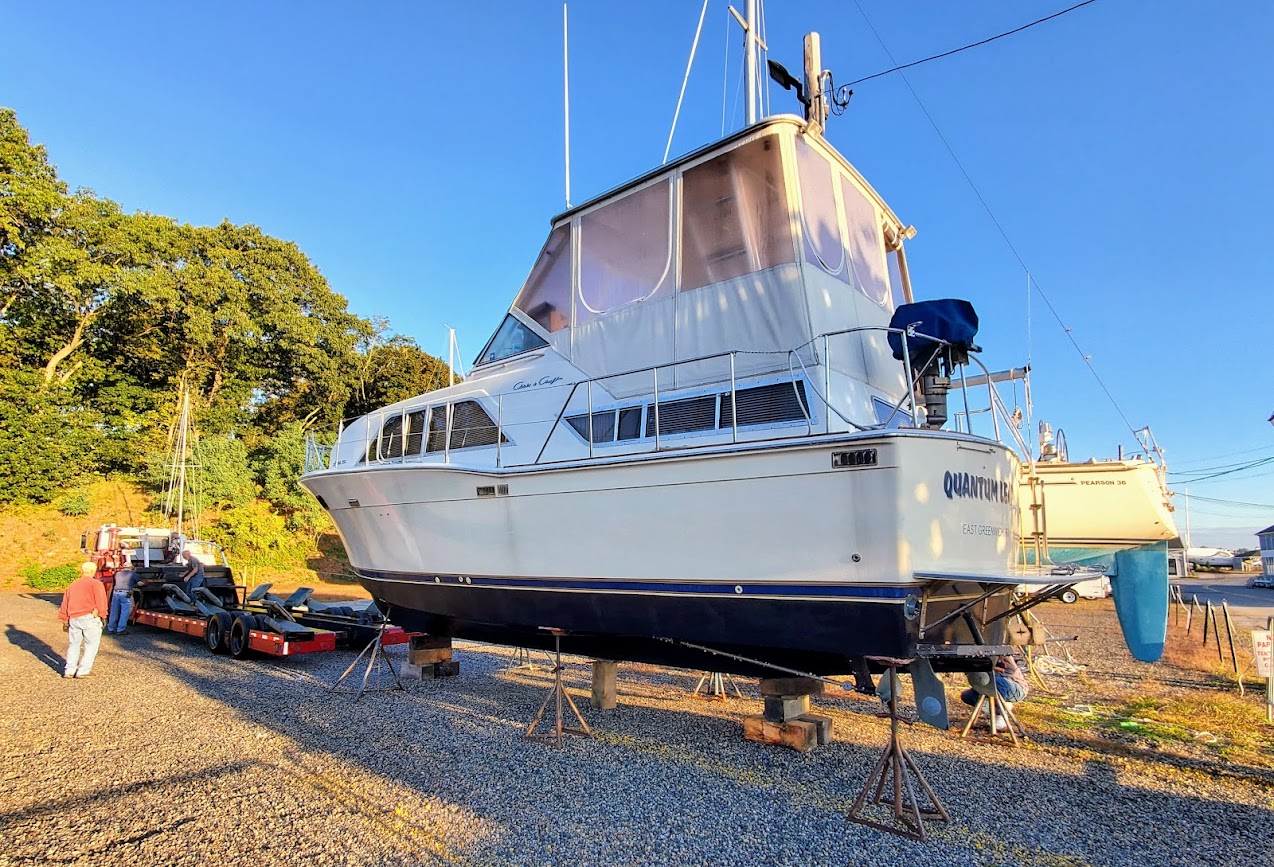 Our journey for the winter of 2021/2022 was to the the southwestern US with Death Valley, CA one of the highlights.