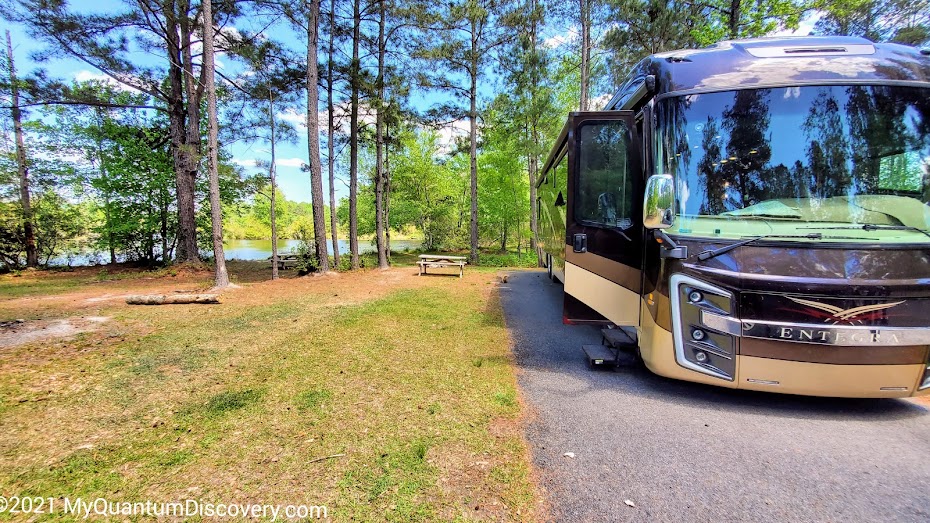 Initially we were impressed, our site was very spacious, pretty far away our neighbors and very close to the water. However, that first impression quickly dissipated to be replaced with a general nervousness about the campground. Unfortunately there was no entrance gate, no office, no nothing so anybody and everybody visiting the park could wander or drive around the campground at any time of the day or night. Although the site was a good distance from our neighbors providing some privacy, there was a foot path adjacent to the lake right in front of our coach. 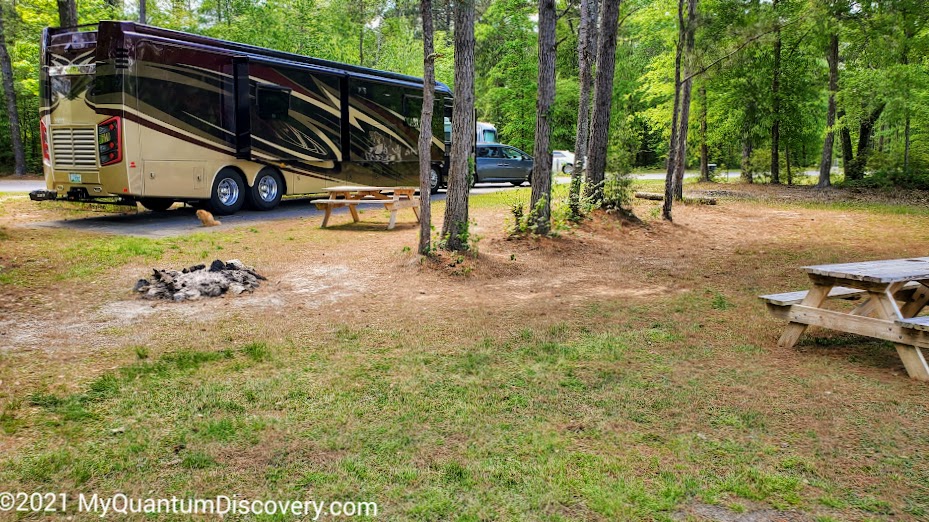 That in itself wasn’t a problem but in addition to the one on our site, there was a picnic table on the path next to our coach so on several instances during our stay we had groups of guys fishing and/or sitting at the table within thirty feet of our coach and vehicles passing by between us and the water. Not a big deal but the “vibe” was not quite as comfortable as a limited access campground would be. Nevertheless, we definitely would consider staying here again but next time would know what to expect.

Augusta has a lot to offer for visitors. In addition to the famous Augusta National Golf Club (off limits to the public) where the Masters Tournament is played, there is a lot of history and a lot to do in the area. Tours can be taken of the boyhood home of United States President Woodrow Wilson who lived in Augusta from 1860-1870, the longest period spent in one residence, while his father served as pastor of the First Presbyterian Church. To learn about one of the music legends who spent his boyhood in Augusta, take the James Brown Family Historical Tour.  For museum buffs, there’s the Augusta Museum of History, the Lucy Craft Laney Museum of Black History or the Morris Museum of Art. The story of the Industrial Revolution in the American South can be found at the Augusta Canal National Heritage Area.

That all sounds intriguing but since it was such a beautiful day, we opted to enjoy an outside activity. A walk along the Augusta Riverwalk would be just the ticket, not only would it provide a bit of exercise but it would also provide us with an opportunity to learn about the history of Augusta. 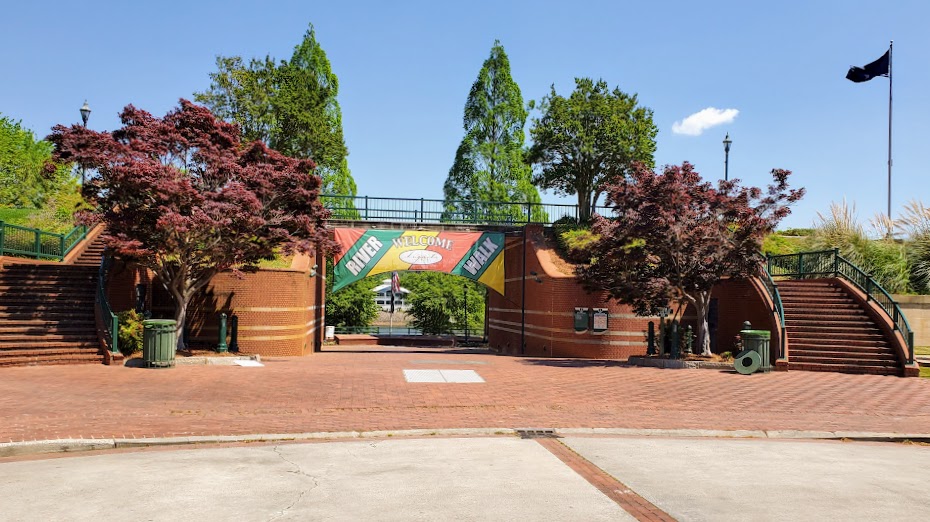 At one point in history, Augusta was the second largest inland cotton market in the world, but unfortunately periodic flooding of the river between the late 1800s and early 1900s not only damaged the downtown business district and the homes of residents, but thwarted the growth of this industry. 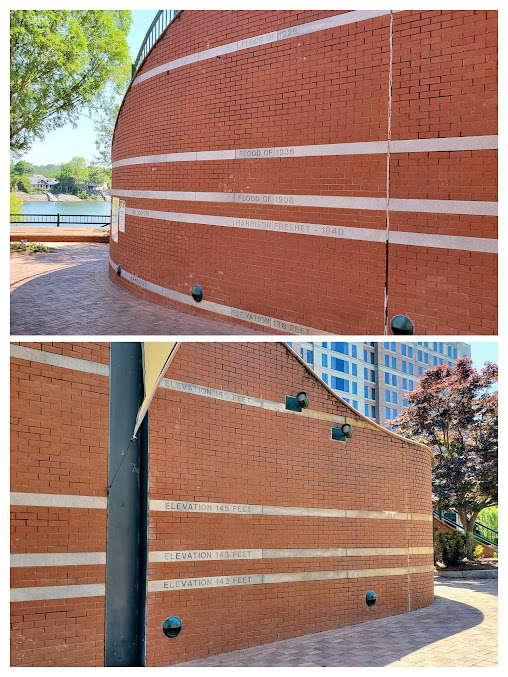 In 1908 after a major flood left 6,000 people homeless and 20 people lost their lives, a levee (dirt and rocks) was built (it took six years to complete) by manual labor using mules, but alas in 1929, the river crested at 46 feet and flowed over the levee, once again severely flooding the downtown area. In 1936, the Corps of Engineers rebuilt the levee to the height that it is today. When the Clark Hill Dam (now named the J. Strom Thurmond Dam) was constructed up river in the early 1950’s the river levels were finally brought under control. The dam also provided a source of power. 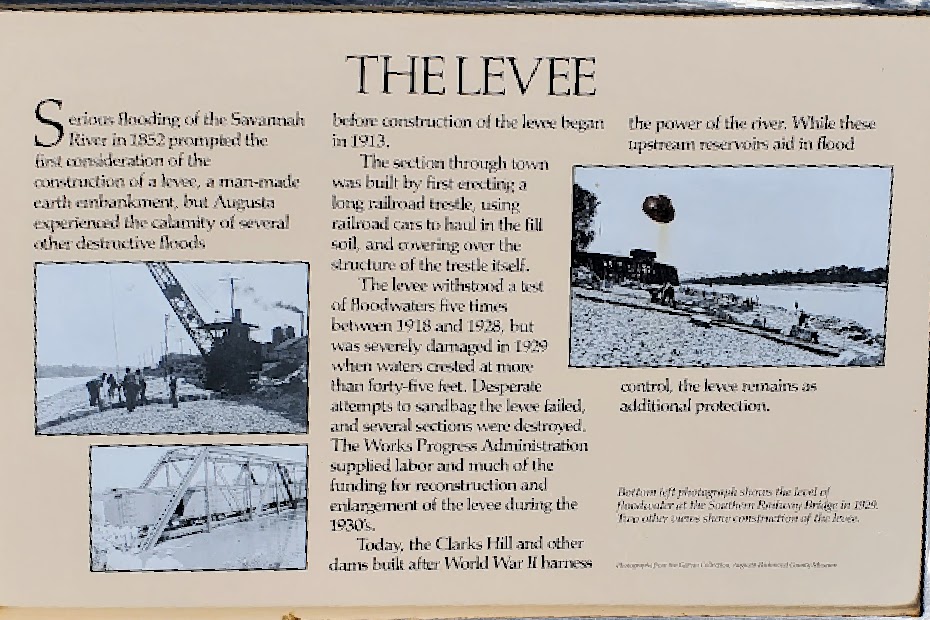 Today the Riverwalk consists of brick walkways along the top of the levee and a lower tree-lined walkway along the bank of the river. 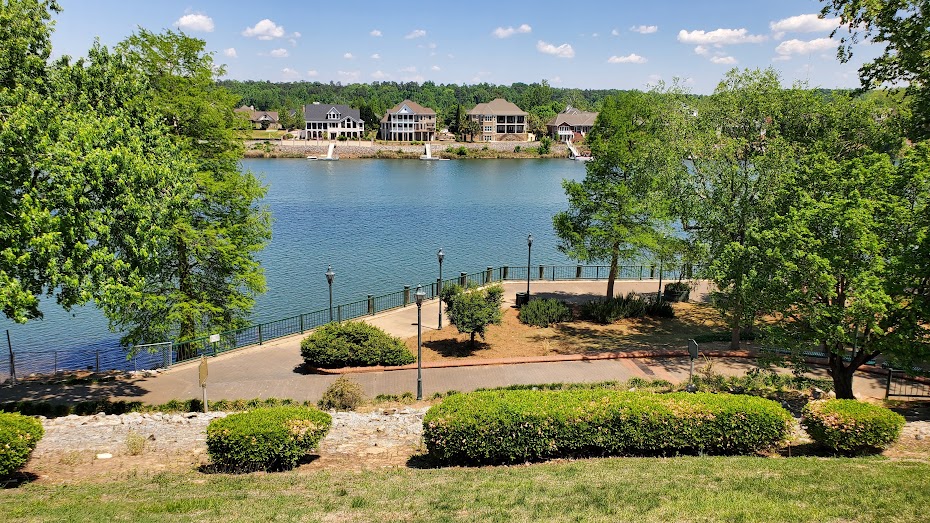 We didn’t realize initially that there was a state border in the middle of the river so we were looking at South Carolina on the opposite side. Great place for a walk while learning about the history of the cotton industry, the 19th century railroad and flooding through the numerous displays on both levels. After the walk, enjoy a concert at the 1800 seat outdoor amphitheater. Kids can play at the playground, then enjoy a family lunch at one of the many picnic areas. 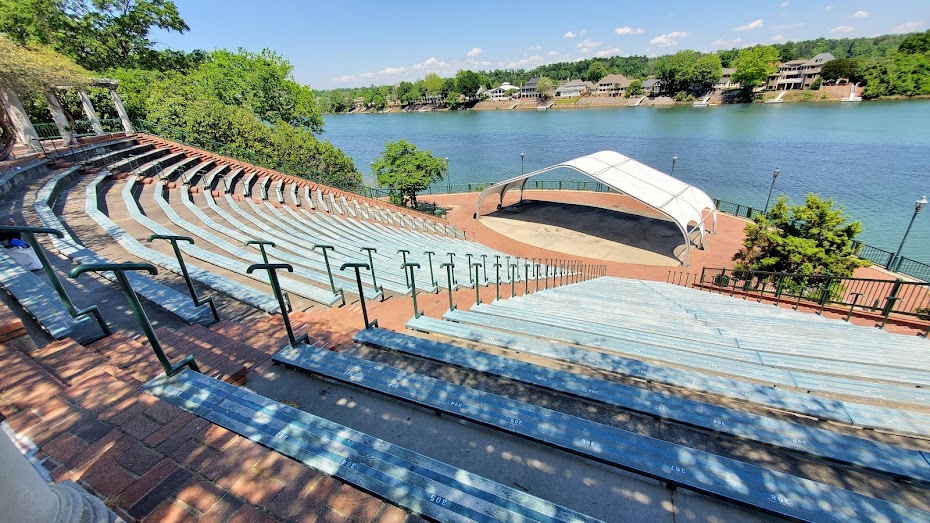 Check out what time it is at the Alematic Sundial on the top of the levee by standing on the month of the year – your personal shadow points to the time of the day. Very cool! 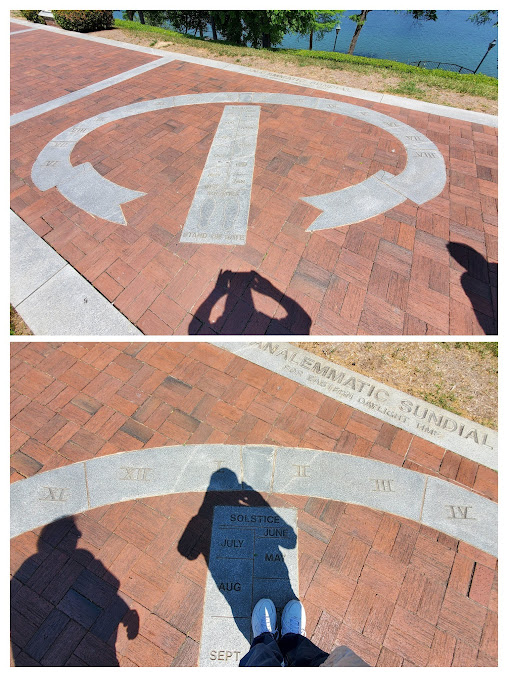 At the very end of the walkway is a marina which offers dockage for your boat. But just before the marina is the 6th Street Railroad Bridge, a drawbridge which was built in 1912 for Southern Railroad. Today it is maintained and operated by Norfolk Southern Railroad. 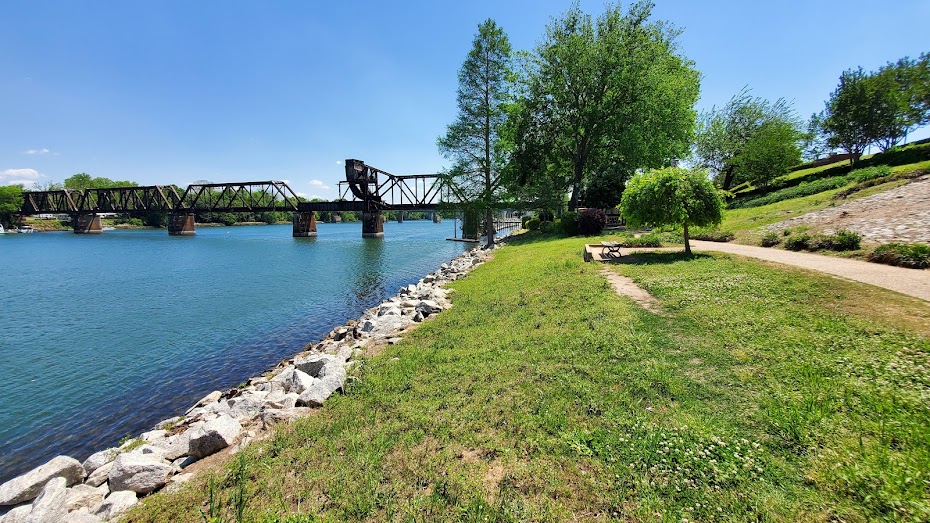 A Scherzer rolling lift, a 101 foot lift span developed by Chicago engineer William Donald Scherzer, once allowed the bridge to open for boats. The lift which has a rocking chair style base uses a counterweight to balance the span as it is lifted, allowing boat traffic to pass under the bridge. Interesting structure. 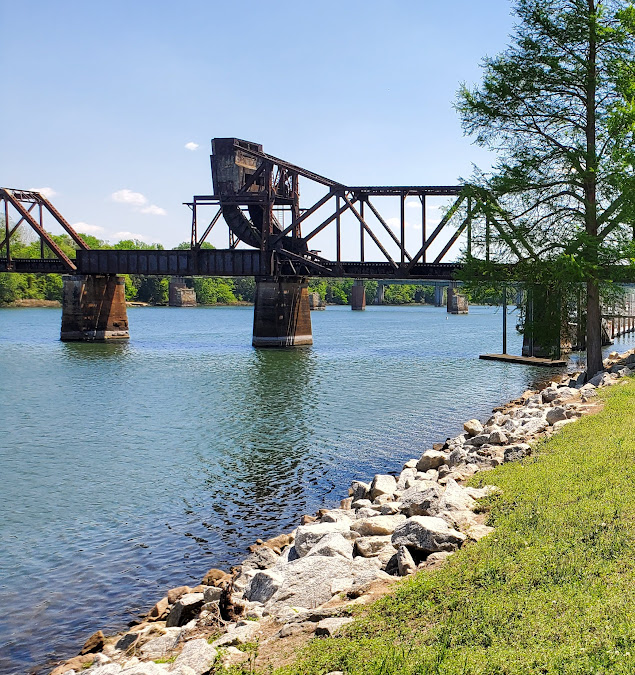 Having seen everything there was to see along the Riverwalk, we headed over to the Augusta National Canal Heritage area. See a map of the area here. 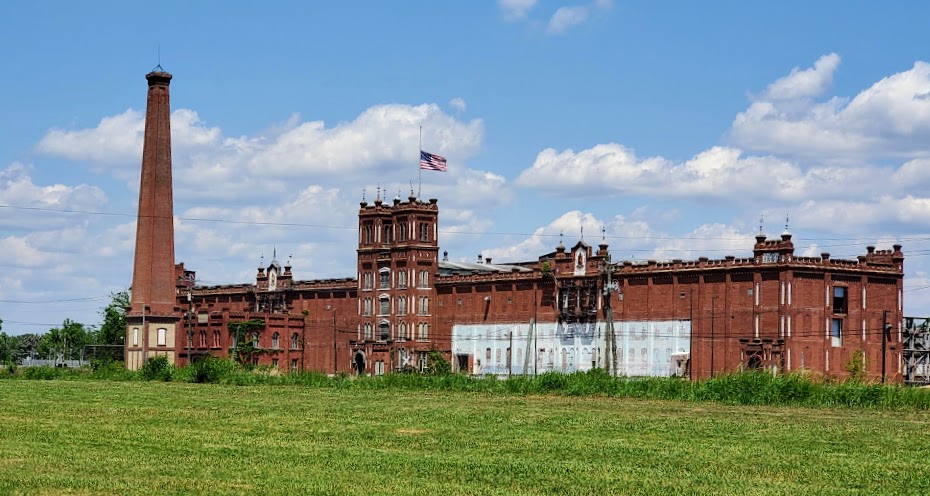 Although there were a lot of things to do in this area ranging from boat tours to biking/walking trails to exploring the Discovery Center at Enterprise Mill, unfortunately we didn’t have enough time to do much exploring. However they do offer a virtual tour on their website. 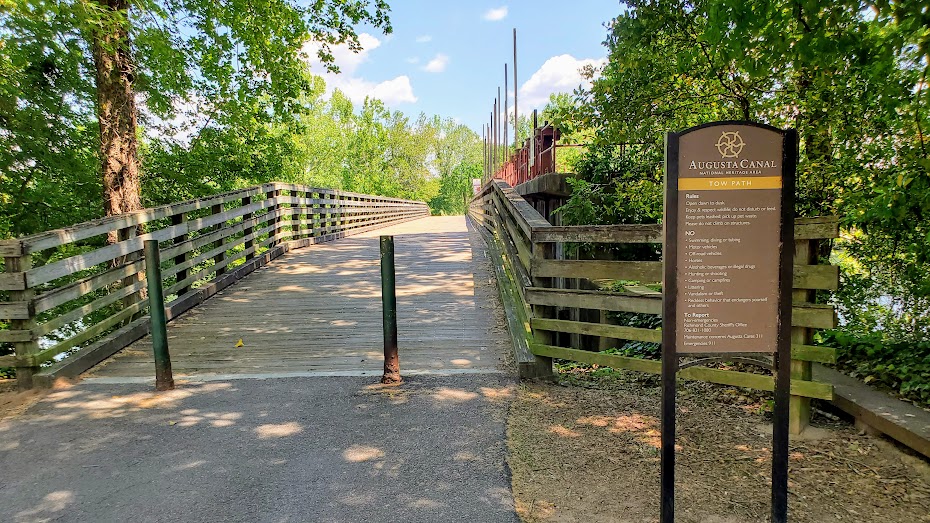 We ended our hard day of sightseeing with a little relaxation sitting by the campfire. 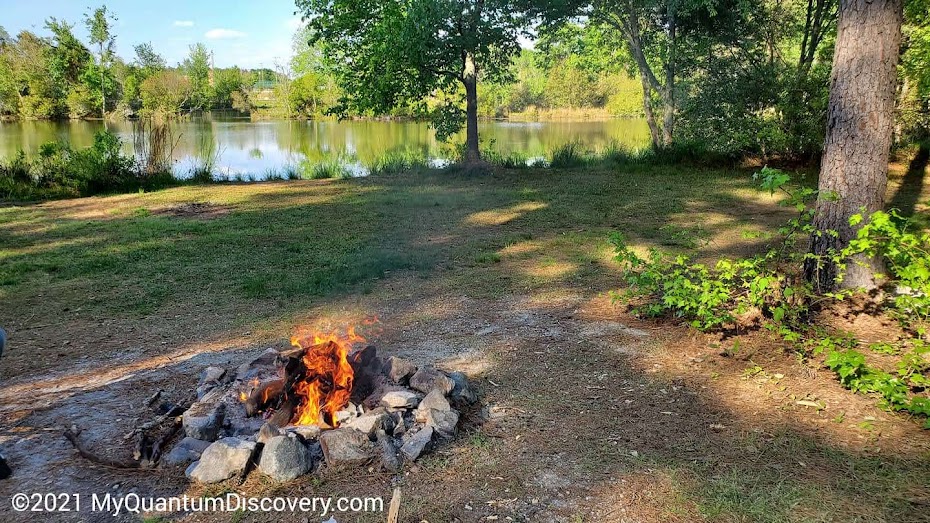