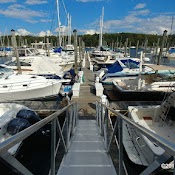 Over the past few years, our boating season has been getting shorter and our RV season is getting longer. And this year was no exception! While we are torn about leaving New England early and missing out on the best time of year there (Sep/Oct), we also want to get on the road early enough to visit some of the more northern states before the snow flies. This year we were hoping to make it out to Colorado and Utah.

September 15th, our planned departure date, was fast approaching. So much to do before then, prep Quantum Leap for 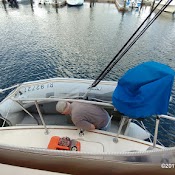 her long winter nap (she would be hauled on September 26th after our departure) and finish various projects on the coach to get us ready for this years winter sojourn. After our return from our boating excursion to Newport and putting all our medical appointments behind us, the race was on!

Yes it was a little hectic but somehow we managed to pull everything together so when the 15th rolled around, we were ready. We were sad to say goodbye to the upcoming fall foliage, Narragansett Bay, Greenwich Cove, Quantum Leap, our friends, Rob’s aunt & uncle, my 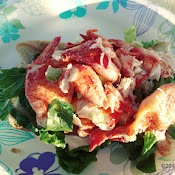 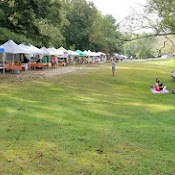 favorite grocery store Dave’s Marketplace, the Farmer’s Market at Goddard Memorial State Park, the lobster rolls at Bon Bon Appetit in Exeter and the rest of our favorite restaurants.

Remembering all the Tex Mex/Mexican, BBQ and meat dishes we ate last winter and the craving I had for seafood, I was particularly sad to say goodbye to all of the wonderful seafood choices here in New England. During our last two weeks in RI, I was on a campaign to eat fresh seafood (especially steamers and lobster) 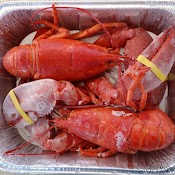 every night, guess that was my way of stocking up for the upcoming winter!

So it was with mixed emotions, a blend of regret and excitement, that we left. The first leg of our journey would be pretty similar to other years with our first stop being a two night stay at Arrowhead Marina & RV Park in Glenville, NY for our usual family visit with Rob’s Dad and his brother, Dave and his family in Albany, NY. Always great seeing family. Plus the day that we left we discovered a new breakfast restaurant in 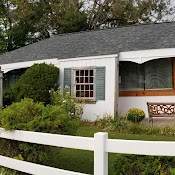 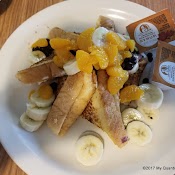 From there we continued heading west, stopping at a few familiar campgrounds – Maple Lane RV Park in Cuba, NY and Indian Creek Resort in Geneva On The Lake, Ohio (see our notes about these two campgrounds at the end of this post).

Shipshewana South Campground in Shipshewana, IN was our next stop and where we would 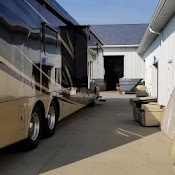 spend a busy five days. We so love this area in the middle of Amish country, no matter what season it is, it is always so pretty. Having been here so many times before, we had a list of where we wanted to go and what we wanted to do.

You’re probably thinking that we were stopping in this area because we needed to have service done on our coach at Entegra in Middlebury. If you were, you are so wrong! 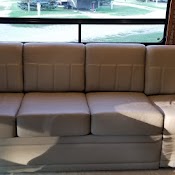 Instead we were there for the installation of our new Lambright Superior Wall Hugger Power Reclining Sofa which we ordered from Lambright Comfort Chairs last May. So you might be wondering why were we replacing our existing 100″ couch which was less than a year old?

The primary reason was because three of its four sections were above the queen size sofabed and just weren’t comfortable. The fourth section which had a semi-recliner wasn’t comfortable either! There is no support under the cushions, plus the cushions themselves were not firm enough for our tastes. The new sofa provides a full power recline on both end sections with a fixed middle section. It would be a rare occasion indeed for us to have guests sleep aboard, but if we ever did the two recliners go almost completely flat and are comfortable enough to sleep on. Another selling point is that they were custom built with the same Ultraleather material and match the rest of the interior decor exactly. 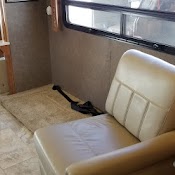 So on the day of our installation, we pulled into the parking lot at Lambright where two very nice young men, both Amish, came on board to remove our existing couch which would be donated to a local Amish family in need. 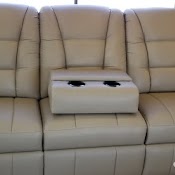 Fortunately the couch comes apart in sections making it fairly easy to take off the coach. Once the old one was removed, the new one was brought on board and installed. The entire process was completed within 1-1/2 hours. Typically they will secure and bolt the couch down but Rob asked them not to as he would need to move it himself at a later time.

We wanted to push the new couch as far back as we could against the wall but that was not possible because the vertical valances on the sides of the window were too long. These vertical valences were wood with a cut-out pattern and could not be shortened without destroying their appearance. The solution was quickly found – swap these longer vertical valances with the shorter ones installed on the rear bathroom window. Perfect – problem solved!

Now the new couch was only 84″ long (vs. 101″ for the old one) leaving 8″ on each end with the couch centered under the window. Plans were quickly formulated to build two cabinets (yippee more storage) at each end. Wanting an integrated look, Rob contacted A1A Solid Surface in Syracuse, IN who built our coach countertops for Entegra and provided our contact there, Andrea Hatfield, with detailed measurements and plans for the new cabinet tops. We were pleasantly surprised to learn that these two pieces, custom made to our specs and an exact match for the existing countertop material (an acrylic like Corian made by Hanex called “Twister Light”) would only cost a little over $100! Although we picked up the new pieces during our stay in Shipshewana, the cabinets won’t actually be built until we get to California and have access to woodworking tools.

Do we love our new couch? You betcha! Not only is the quality so much better than the original 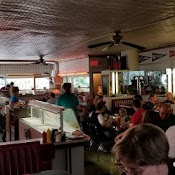 couch but it is the ultimate in comfort. Of course, now the risk is that both of us fall asleep almost instantly when reclining!

As usual, during our stay, we simply had to visit a few of our favorite haunts – Yoder’s Popcorn to stock up on our favorite microwave popcorn (Lady Finger and Tiny Tender White) and the Amish bulk food store, E & S Sales, Menards and discovering a few new ones.

Our friends, Betsy and Nancy (RV-A-GoGo) were staying at the Elkhart County Fairgrounds following service on their coach so we were able to meet up with them several times. Always fun! Enjoyed having lunch 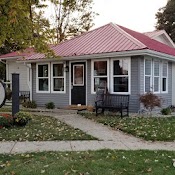 together at the South Side Soda Shoppe & Diner in Goshen and dinner at West on Warren, a relatively new restaurant in Middlebury. 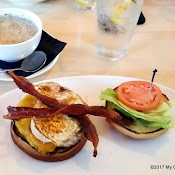 Delicious Creamy Wild Mushroom Soup ($4) and a Sweet & Savory Burger ($14 for a half-pound Halpern’s Black Angus steakburger, bacon, cheddar, caramelized onions, lettuce, tomato, onion jam and fried egg on a Hawaiian Bun) were our choices for an early dinner. Everything was delish especially the soup! 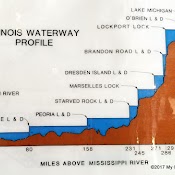 Leaving Shipshewana behind, Illini State Park (see our review) in Marseilles, IL would be our next stop where (except for the constant dinging by the huge acorns falling 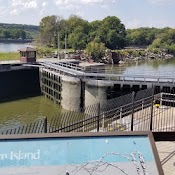 from an overhead tree and the tight roads), we would enjoy a two night stay parked next to the Illinois River. Here we would visit the Illinois Waterway Visitor Center which had interesting displays and exhibits highlighting the waterway system, a 336 mile system of rivers, lakes, and canals providing a shipping connection from the Great Lakes to the Gulf of Mexico via the Illinois and Mississippi rivers. 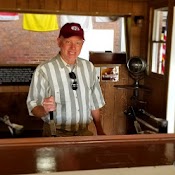 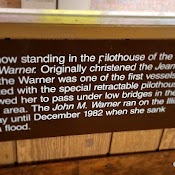 Nearby Painted Rock State Park sounded like a promising place to visit, offering not only a Visitor Center but 13 miles of hiking trails, many scenic waterfalls and a favorite spot for bald eagles. Early fall especially with little rain and a span of 90 degree temps was not the best time of year to visit the park – the waterfalls were dry. Best to visit in the spring. And we had already learned that eagle sightings would most likely be non existent – they are most abundant in the January/February time frame when they frequent the river for fish. Nope, no way, we’d love to see bald eagles but not enough to visit in the middle of winter in snow country!

One thing we didn’t love during our stay in Shipshewana were the temperatures which were hovering in the low 90’s. Hot and humid! Not the weather that we enjoy. But we figured when we left there on September 24th and headed west, the temps would start to cool! But that didn’t happen fast enough for our taste! More about that in our next post.

A note about Maple Lane and Indian Creek Campgrounds:

Both of these campgrounds offer Passport America and if you’re timing is right they are a good deal. But check the PA terms carefully. Maple Lane is now on our s**t list because they would not honor the PA discount on a Sunday night even though the PA site said they would. So be sure to call and get clarification because this campground is not worth the full $40 per night rate.

Also, our previous comments about stays at Indian Creek were not all that positive, but at the PA rate and if there have not been heavy rains, it is a pretty decent place for the price. Also we found better routes to get there from the interstate that minimize the low tree branch issues. Approaching from the east on I-90 we suggest taking SR45 Center Rd (exit 223) all the way to SR531 and head west. SR531 runs along the Erie shoreline. If approaching from the west the above may still be the best route despite a bit of extra distance, otherwise take SR534 (exit 218), to Main St. to Austin Rd (209) then head east on SR531. The railroad track “hump” on SR534 should not be an issue as we cleared it OK in our 45′ rig with a 320″ wheelbase.