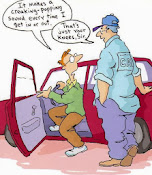 It doesn’t matter whether you live in a house, a boat, a motor home or a tent, where you are, who you are or what you are doing, life happens and your best laid plans can be interrupted by some unexpected event.  Well guess what?

Things have been progressing well for us over the past month since our house closing. The boat was hauled on October 17th and put to bed for the winter, lots of projects on the bus were finally getting done and on top of all that, a lot was happening with the auction and clean out of my father-in-law’s house as we approached his November 1st closing and subsequent relocation to Albany, NY.

Since our original tentative departure date from Sun Valley was November 9th, we figured we would soon be on our way – finally! But after a visit on October 24th to an orthopedic surgeon followed by an MRI on hubby’s left knee things changed quickly. Suddenly, the word “surgery” was being bantered about.  Oh, no!  Not yet another delay! Can’t say it was a surprise to either of us though.  He’s been abusing his knee (and every other part of his body) for the past year – from being a contortionist during the bathroom remodel to all of the packing, lifting, climbing stairs, and moving stuff. If his knees could talk, they would have been screaming at him to stop!

Sure enough, the MRI showed a torn meniscus and based on the level of pain he was in, there were only two options: arthroscopic surgery or don’t do anything – just deal with the pain.  Since his knee bothers him almost constantly, even when sleeping (trying to that is), we didn’t relish the thoughts of the second option.

When we told the doctor our plans and that we were hoping to be heading south early in November, he told us that they would try to get him in right away either at Faulkner Hospital in Boston or at the new Brigham & Women’s Health Care Center at Patriot’s Place in Foxboro and that his assistant would call us in the next few days to let us know.  Suffice to say we weren’t very optimistic!

But happily we were wrong! The following day we received a call from the doctors assistant, Pat, who said that Dr. Gomoll (2018 update: he has since moved his practice to New York) could do the surgery on November 1st at Patriot’s Place (preferred location as it is a much shorter drive). Great news! Whoops, wait a minute, bad news! That was the day of his Dad’s closing and we had promised that we would drive him to Providence and be there for moral support. Geeez!

If we couldn’t make the November 1st date for Rob’s surgery, the next available date would be November 27th.  Hmmm such a tough decision, take November 1st or wait practically a month with more pain, delay our departure and have to deal with cold and the possibility of snow.  Did I say, tough?  Well OK, maybe not!  Having just been through our own closing a month prior, we knew the seller has a very minor role in the proceedings. While of course we wanted to be there to support Dad, there was really no other reason to attend. Plus both Dad’s realtor and his neighbor had offered to drive him and be there for him, so the decision was clear and we locked in the November 1st date for Rob’s knee.

We’ve both had Arthroscopic Knee Surgery before – Rob on the same knee about 14 years ago and mine about 3 years ago so we knew that the initial recovery time is only a few days and after a couple of weeks things are almost back to normal, sans the pain.  Luckily too, the left leg is not involved with driving the coach. Phew,  maybe we would be able to leave by our original November 9th departure date after all!

While we were waiting for Rob’s surgery day, we were busy helping Dad with his pre-closing preparations and trying to get several knee abusing projects done on the motor home.  In addition we continued to sort through everything we had hurriedly loaded on board prior to our house closing, bringing some of it to storage and better organizing what we left on board.

The on-line auction at Dad’s house, organized by Valerie of Simplified Lives and managed by MaxSold.com, ended on October 24th and anyone who bought anything had to pick up their items during a three hour window on Saturday, October 26th.  Of 170+ lots in his auction, only 8 didn’t sell so that emptied out a big chunk of the house contents.

On October 23rd Dad went out to Albany along with his furniture and other stuff he was keeping, then returned to RI on the 27th to supervise the remaining house sale tasks and to take care of some banking.  On Thursday, October 31st, the clean out crew arrived just in time to haul away everything else, which ended up being about 3 large truckloads.  Then another crew arrived to do a quick cleaning.  Then Rob, Dad and I spent about an hour doing some additional sweeping and straightening things out. So despite the tight schedule and a few inconsequential glitches, everything was ready to go for both Dad’s closing and Rob’s knee the next day. 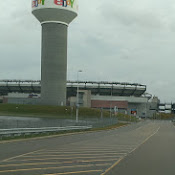 Finally on Friday, November 1st, bright and early we left RI for an hour long drive to Foxboro arriving there by 8:45 a.m. so Rob could be prepped for his scheduled surgery at 10:00 a.m.  The

forecast this day was for heavy rain coupled with a high wind advisory predicting gusts up to 60 mph with possible power outages and toppled trees! Not great but at least the temp was in the 60 degree range so no risk of any flurries. Luckily the rain held off during our drive. 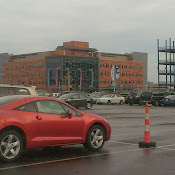 After an hour or so in prep, they wheeled Rob in to the surgical unit and I went out to sit in the waiting area which was quite comfortable.  The waiting area overlooks Gillette Stadium and although the Pats weren’t practicing, there was a group of soccer players on the field so it was interesting 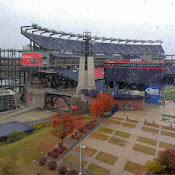 watching them.  After about an hour, the nurse came to get me – Rob was awake although a little groggy, sipping juice and eating crackers.

Within an hour he was ready to go home so the nurse told me to get the car and meet them at the front entrance.  Of

course all morning it didn’t rain but as soon as I got down to the front door, there was a torrential downpour.  I was heading directly into the 30 to 40 mile per hour wind and I got totally drenched.  Hopefully there won’t be a next time but if there is and the weather forecast is bad, my vote will be to use the valet service.

So after arriving back home to the bus, even though his knee felt fine, Rob just took it easy and enjoyed a day of rest. Later we learned that Dad’s closing went without a glitch so that was a big relief!  This was a very stressful ordeal for him and hopefully now he can finally relax and enjoy his new apartment.

Back to our plans….since the surgery was on his left knee, Rob won’t have any issues driving the beast, so our plan is to leave our current spot at Sun Valley in East Greenwich, RI and head back to Normandy Farms on October 4th so we’ll be closer (like 5 minutes away) to Patriot’s Place for his follow up appointment on the 6th. Also, Chooey has an appointment on the 7th for one more local checkup with Dr. Glazer, his favorite specialist in West Bridgewater, MA.

So with all that taken care of, the plan is to leave Normandy Farms on Friday the 8th.  Our first stop will be Albany so we can say goodbye to Dad and see his new digs. Of course that’s heading west, not south and there are no campgrounds open in Albany this time of year so we will be trying something new (to us) for one or two nights and will let you know how that works out (hint: it’s not a Walmart parking lot). Then down south we’ll go. Just in time as it’s getting pretty chilly here especially at night and there have been a few frost advisories.

BRRRR!  Get me outta here! Let the adventure begin!