Cool, crisp days. Brilliant red, orange and yellow leaves framed against the bright, sunny blue sky.  The pitter patter of leaves as they slowly float through the air and gently hit the ground.  The

smell of wood burning.  The joy of raking leaves (well, maybe not so much joy).  Ah, yes, autumn is such a beautiful season in New England.

Several weeks ago, we decided to take advantage of a perfect autumn day and take a long walk at Goddard Memorial State Park

in East Greenwich, not too far away from Sun Valley and directly across the cove from the East Greenwich Yacht Club where our boat is docked.

golf course, a beach with a lifeguard on duty during the summer months,  over 18 bridle trails, an equestrian center, 355 picnic tables, 11 game fields and a performing arts center for weddings and special events, Goddard Park is one of Rhode Island’s hidden

During the summer it is extremely busy but this time of year, especially during the week, you’ll only see a few people sitting on the benches watching the waves and the seagulls or taking

long walks or jogs along the trails and an occasional horseback rider. Our favorite trail which is about 2 miles long is the one that follows the eastern shore of Greenwich cove. This wide easy walking trail is elevated well above sea level and populated with a beautiful mix of hardwoods and softwoods.

It’s hard to convey the full spirit of a walk in these woods so I guess I’ll just let the pictures at the end of this post speak for themselves.

we took this long walk and burned a few calories because several days after our walk we had  dinner with our new friends, Byron and Pam, who we met recently at Normandy Farms.  After attending a football game at URI, th

ey stopped at one of their favorite places, Schartner Farms in Exeter, RI where they purchased a strawberry rhubarb pie for themselves and an apple pie for us. Thanks again, Byron and Pam!

Oh, my, it was probably one of the best apple pies that we have had.

Not only did it have a light, flaky crust but it was filled with perfectly cooked, lightly sweetened apples.  Yummy!  It was so good that the next week when we were invited to Linda and Herb’s (Rob’s aunt and uncle) for supper with Rob’s Dad and we were tasked with bringing a  dessert, we went to Schartner’s and bought another apple pie.  That was a big hit as well! 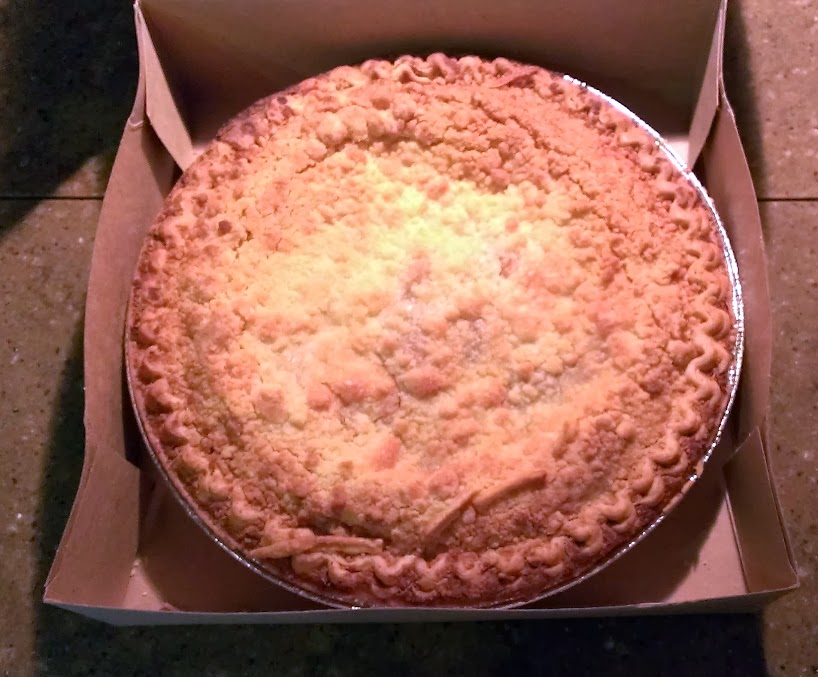 Dutch Apple pie, we knew that we had to do an in-depth scientific evaluation to find out if he was right or not before our departure on Monday. Yep, you guessed it – we went back on Sunday and

bought one for the road!  That should keep our sweet tooth quiet for awhile!  Guess it’s good that we are heading south!

doesn’t), they have a lot of other pies plus home made breads, lots of freshly grown produce, locally made cheeses, jams & jellies, coffee syrup, jarred veggies, and so much more!

If you are ever in the area, it’s a great place to visit. You can be sure that next summer when we are back in East Greenwich, we’ll be visiting Schartner’s again!

Later that evening back on the motor home, there was a beautiful sunset.