Barstow, CA, was our next destination, to be exact Shady Lane RV Park (review coming), a 160 mile drive traveling west on I-40 from Vista Del Sol RV Resort.

Knowing that gas prices in CA were considerably higher than AZ, the first order of business after departing the resort was to fill our diesel tank before crossing the border. At the Arco station we stopped at in Arizona, we paid $2.76/gallon. If we had waited to fill up in California a mile down the road, it would have cost us at least $3.60 or more! That’s a huge difference when you are filling up a 100 gallon fuel tank! 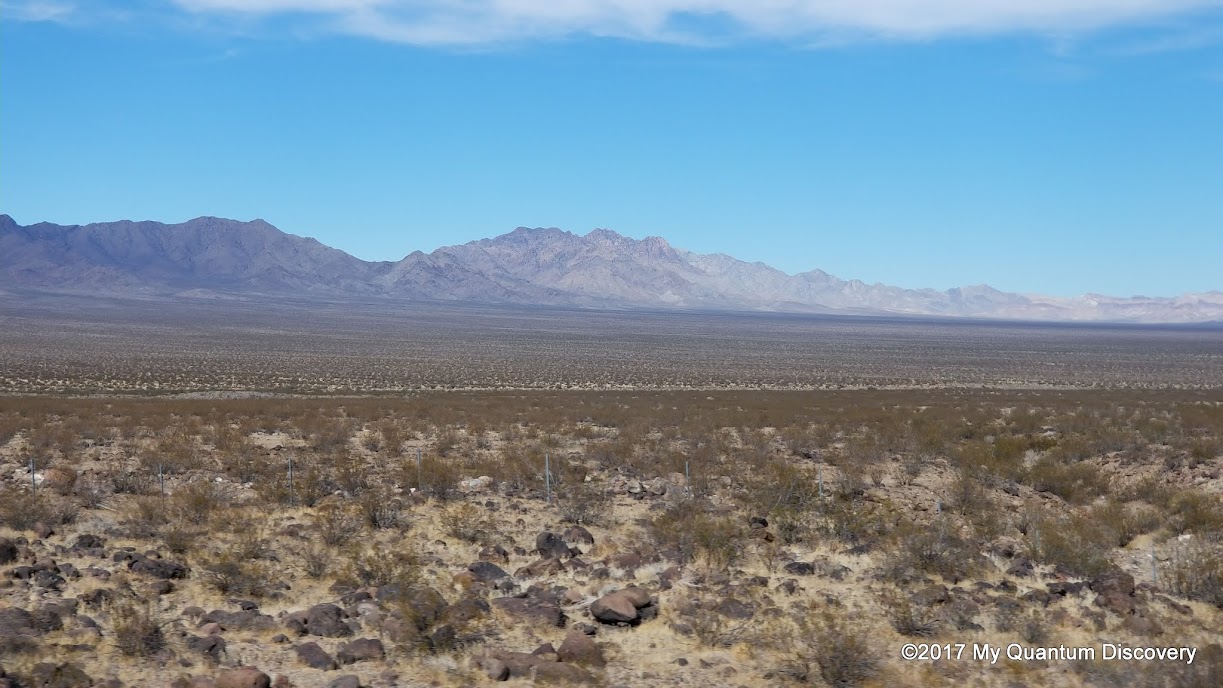 Named after William Barstow Strong, the former president of the Atchison, Topeka and Santa Fe Railway, the Barstow settlement began in the late 1830s in the Mormon Corridor, an area in the west that was settled by members of the Church of Latter Day Saints commonly known as Mormons.

The town is located next to the towns of Daggett and Calico Hills, which were the sites of silver and borax mines in the late 19th and early 20th centuries. These mines produced over $9 million in borax and more than $90 million in silver. 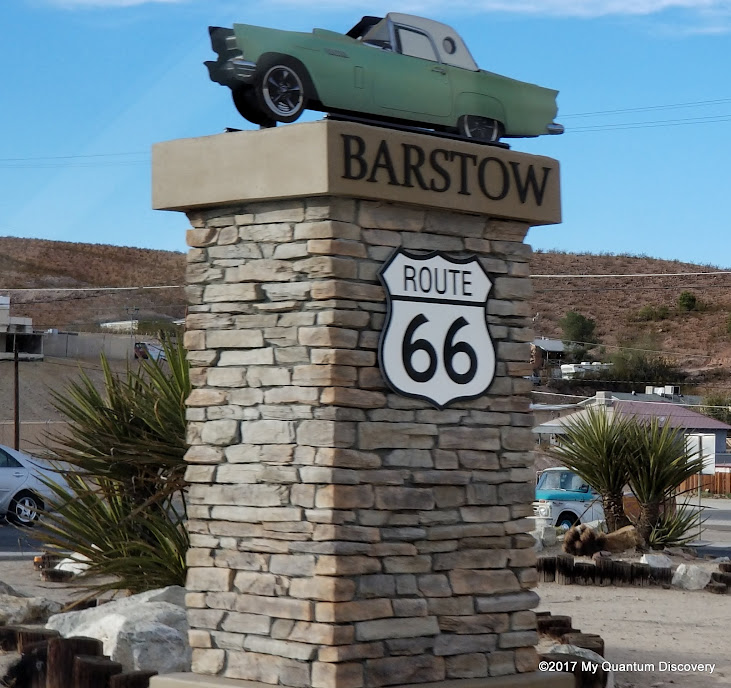 Being on route 66 there are a few points of interest in Barstow, but this was just a quick overnight stop for us so there was no time to really do any extensive exploring. But maybe there’s enough here to justify a return visit in the future.

One of the historic buildings in Barstow that we did see is the Barstow Harvey House, also known as Harvey House Railroad Depot and Barstow station.

This is another Harvey House, originally named Casa del Desierto (House of the Desert) that was designed by architect Mary Colter. Constructed from 1910 to 1913 it combined Santa Fe 16th century Spanish and Southwest American Indian architecture and served both as a Harvey House hotel and Santa Fe Railroad depot. Today it is currently an Amtrak station and government building housing city offices, the Barstow Chamber of Commerce and Visitor Center, and two museums –  the Western America Railroad Museum on the east side and the Route 66 “Mother Road” Museum on the north side.

Once a major stop on Route 66, when I-40 was built, the city wasn’t impacted as much as other Route 66 cities because I-40 and I-15 along with State Highway 58 converged at the city limits,  making it the transportation hub of the western Mojave Desert. 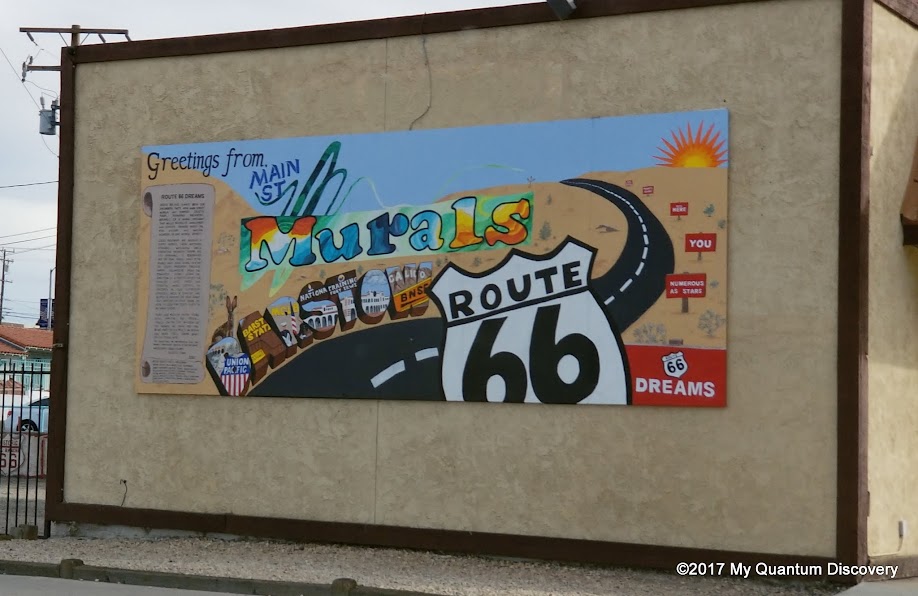 During a quick ride through the town, we noticed a number of murals on many of the buildings. Through the efforts of Main Street Murals founded by Julliette Tison, founding president, Barstow revitalized its Main Street in the hopes of educating viewers about the rich history and natural wonders of the Mojave Desert through these murals. Surrey tours or walking tours are offered to view the murals with local historian “Barstow Steve” who apparently makes the history of Barstow fun with his short – and sometimes long – stories. If you can’t take the tour, do what we did –  take a drive through town to see a few of them or take a virtual tour on their website.

Besides the murals, another attraction that we read about but didn’t have time (or for that matter any desire) to visit (we did drive by it) was the nearby town of Yermo, CA, an “old West mining town that has been around since 1881 during the largest silver strike in California”. It has been converted by Walter Knott (of Knottsberry Farm fame) into a county park named Calico Ghost Town which operates mine tours, gunfight stunt shows, gold panning, several restaurants, the historic 2 ft 6 inch narrow gauge Calico & Odessa Railroad, a Mystery Shack, and a number of trinket stores. 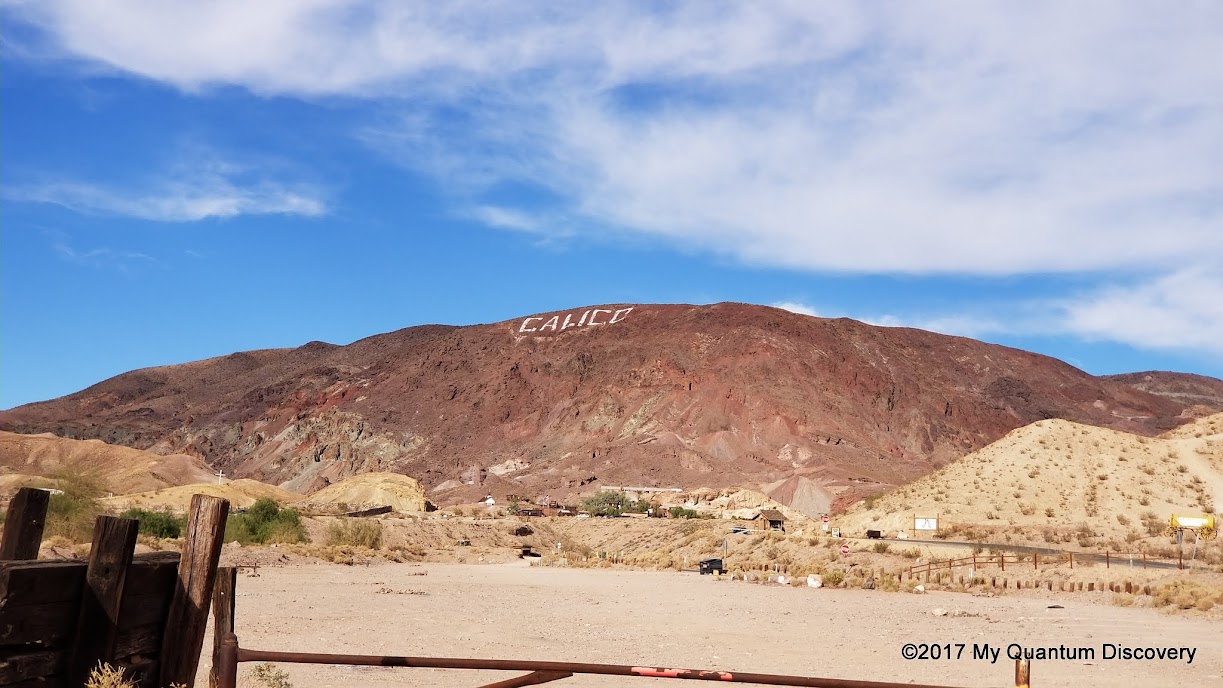 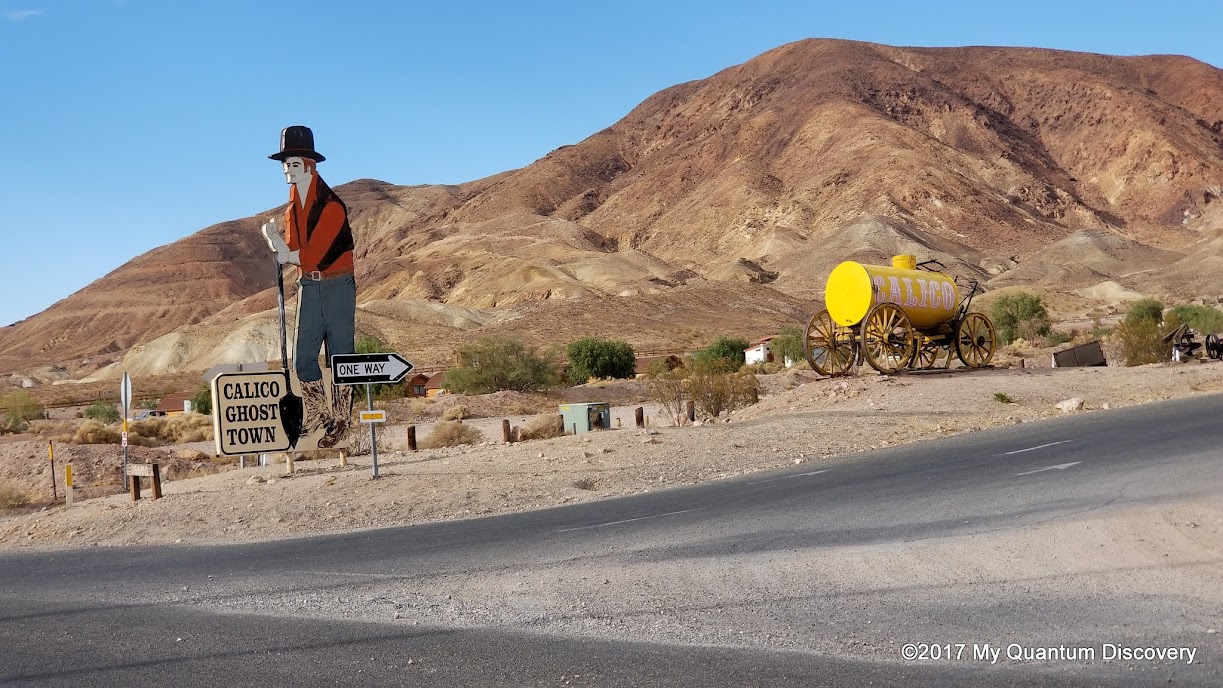 Oh, boy, dust off your poodle skirt, slip into your blue suede shoes and get ready to sing along with some 50s music! For a taste of 50’s nostalgia head to Peggy Sue’s 50s Diner about 10 miles north of Bastow in nearby Yermo where their motto is “Eat to the Beat with good home-made food and great 50’s music”. That’s what we did (minus the skirt and shoes of course). 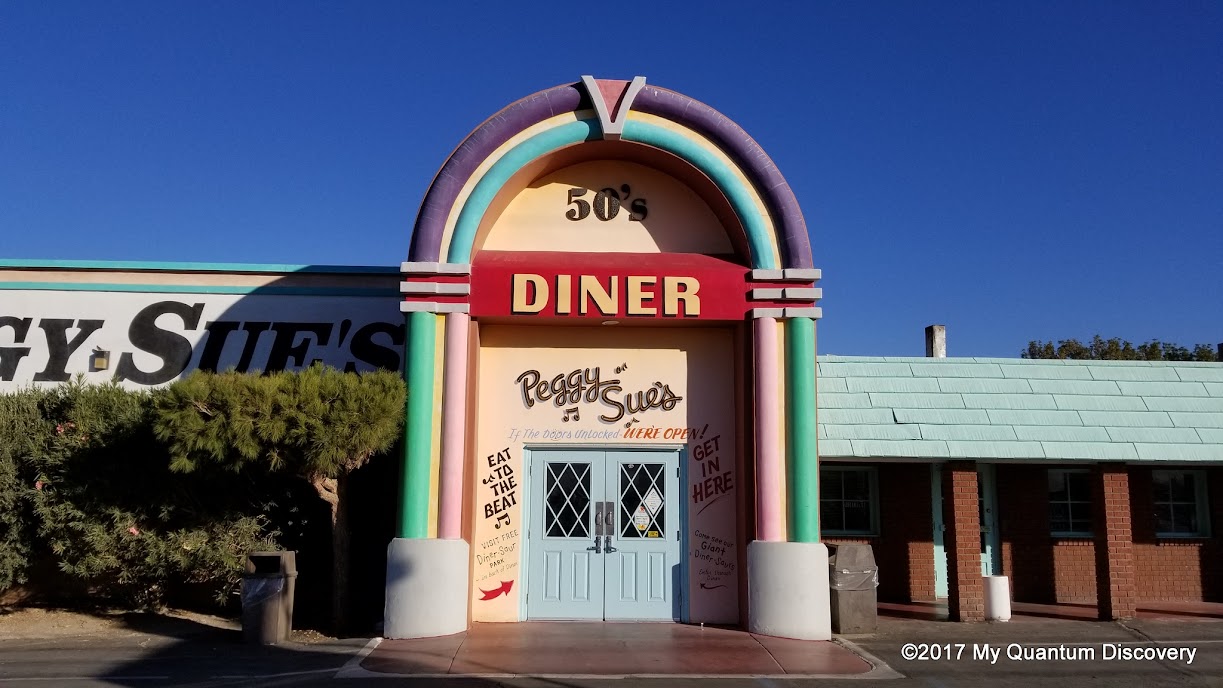 Built in 1954 from railroad ties and mortar from the nearby Union Pacific Rail yard, this restaurant originally had only 9 stools and 3 booths, a big difference from the restaurant of today which seats 300. Thanks to owners Peggy Sue and Champ Gabler who bought it in the mid 1980s, a taste of Hollywood was brought to the middle of the desert, where summer temps in Yermo can reach over 100 degrees.

No stranger to Hollywood, Peggy Sue was featured in over 100 films and commercials and even had a song written about her (“Peggy Sue” by Buddy Holly and The Crickets). Champ worked at Knotts Berry Farm. 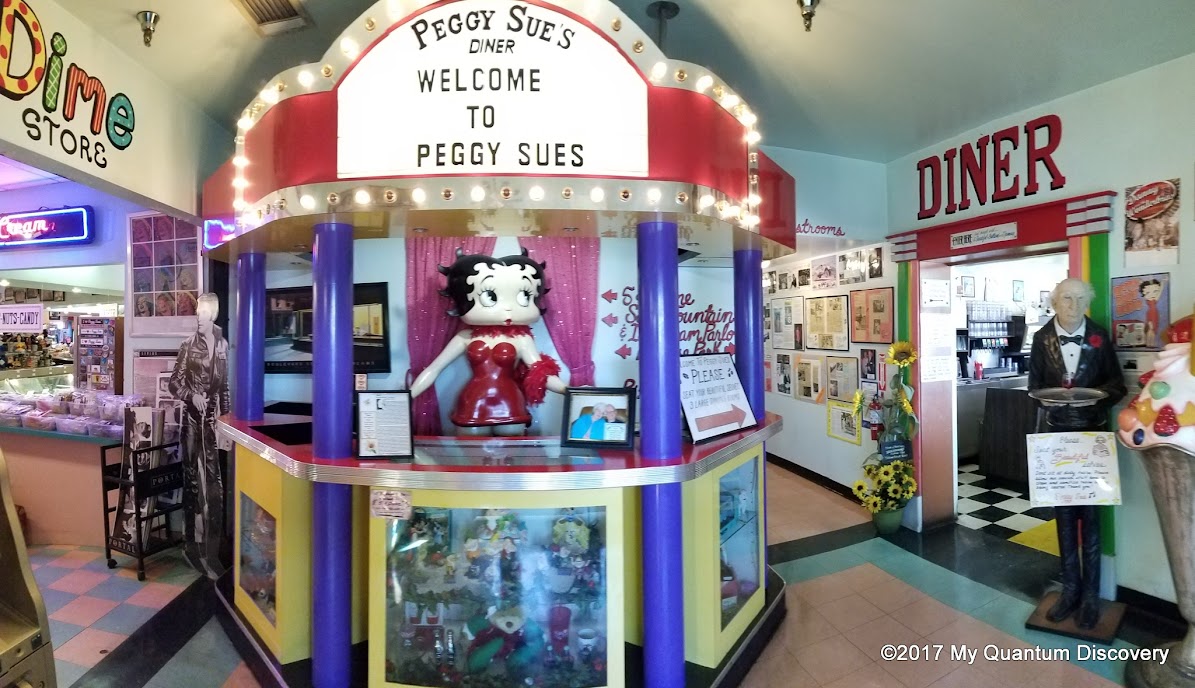 When Peggy Sue’s opened in 1987, it quickly became a great place to display all of their movie and TV memorabilia that they had accumulated over the years. Needing more room and wanting to turn 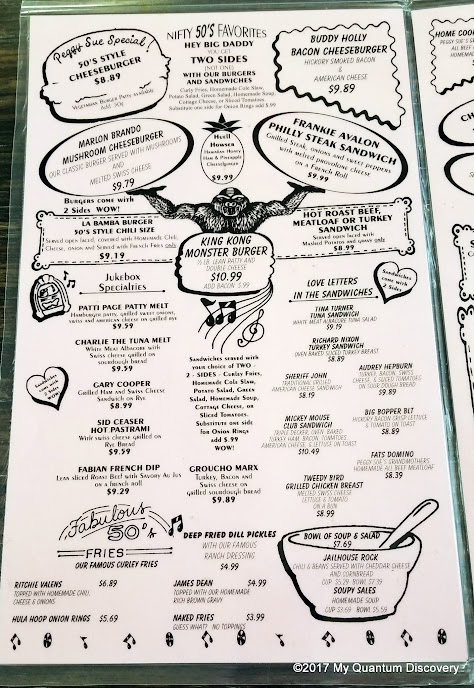 the diner into a real Old Fashioned Tourist Stop, they further expanded the building to include a 5 and Dime Store with curios and memorabilia, a soda fountain and ice cream parlor and even a pizza parlor. From what I’ve read, people from all over the world have visited Peggy Sue’s so they most definitely are a tourist stop.

As soon as we walked in the door, a very cool Betty Boop greeted us. Not realizing how many dining rooms there were, we walked through the door labelled Diner and seated ourselves in one of the booths. A waitress dressed in a pink and blue uniform with a cute little hat came over with menus. And yes, we couldn’t help but sing along (quietly of course) to the 50’s music playing continuously.

Since this place was all about movie and TV memorabilia, it stands to reason that just about everything on the menu had a celebrity name. Choose from a Milton Berle Omelette, Godzilla Omelette, Rita Hayworth Cheese Omelette, King Kong Monster Burger, Frankie Avalon Philly Steak Sandwich, Sid Ceasar Hot Pastrami or a Buddy Holly Bacon Cheeseburger to name a few! Nothing fancy for us, just a couple of eggs, bacon, hash browns (the one thing on the menu without a name) for both of us. 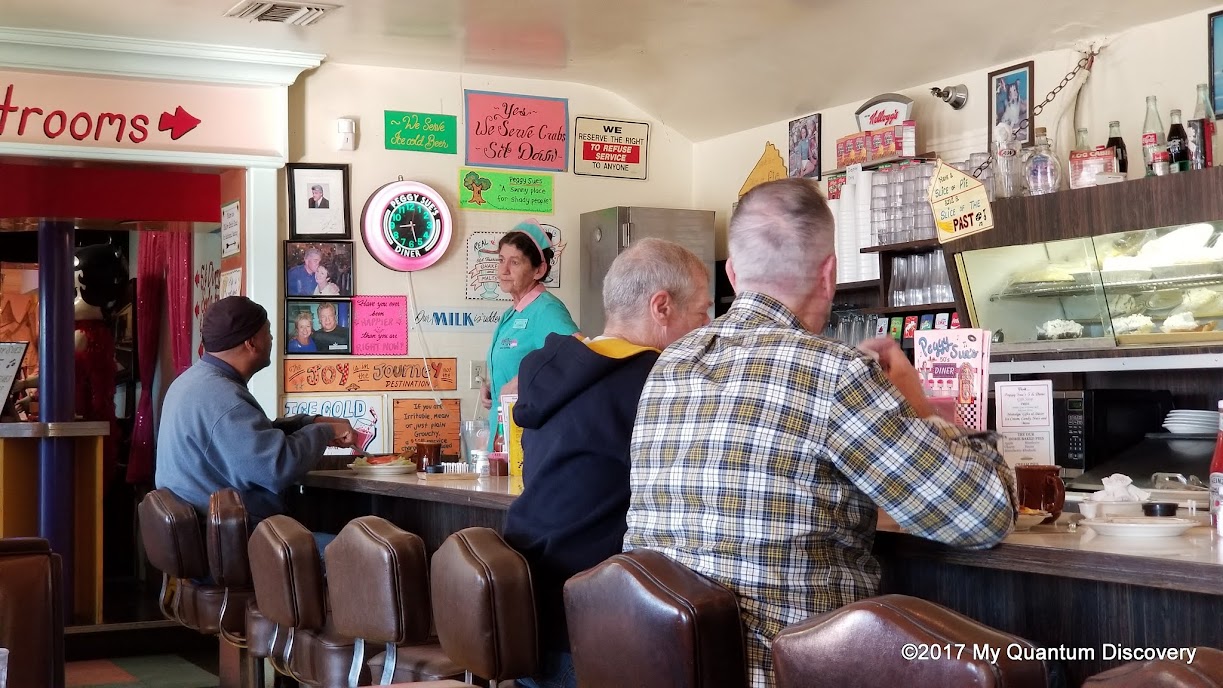 Done with breakfast, we wandered into the other dining rooms. Oh, my, this place is unbelievable! 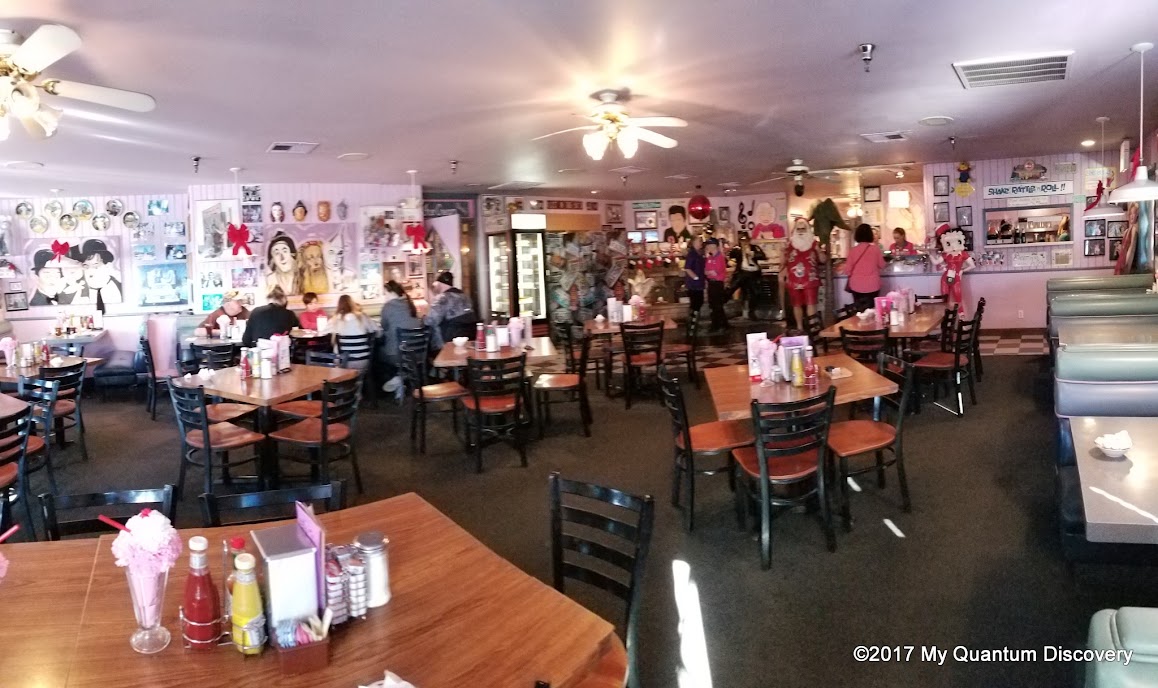 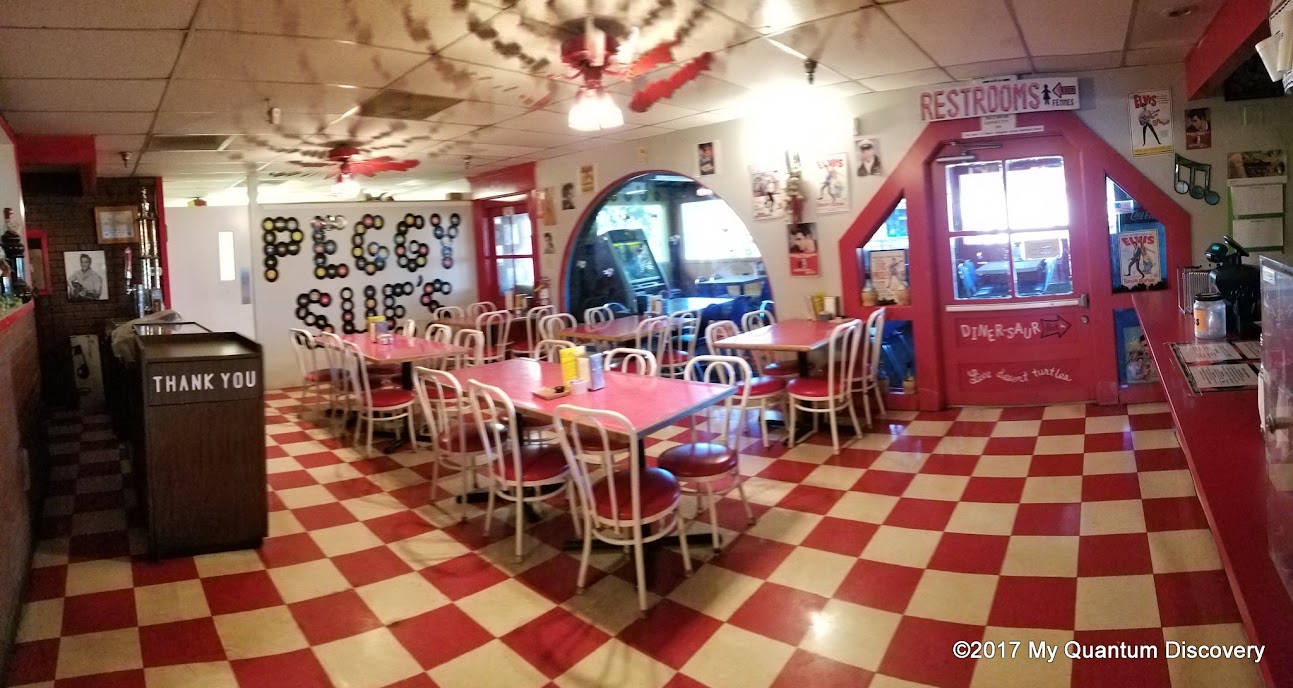 How about a selfie with the larger-than-life sculptures of The Blues Brothers and Elvis or next to one of the many pictures of Marilyn Monroe? 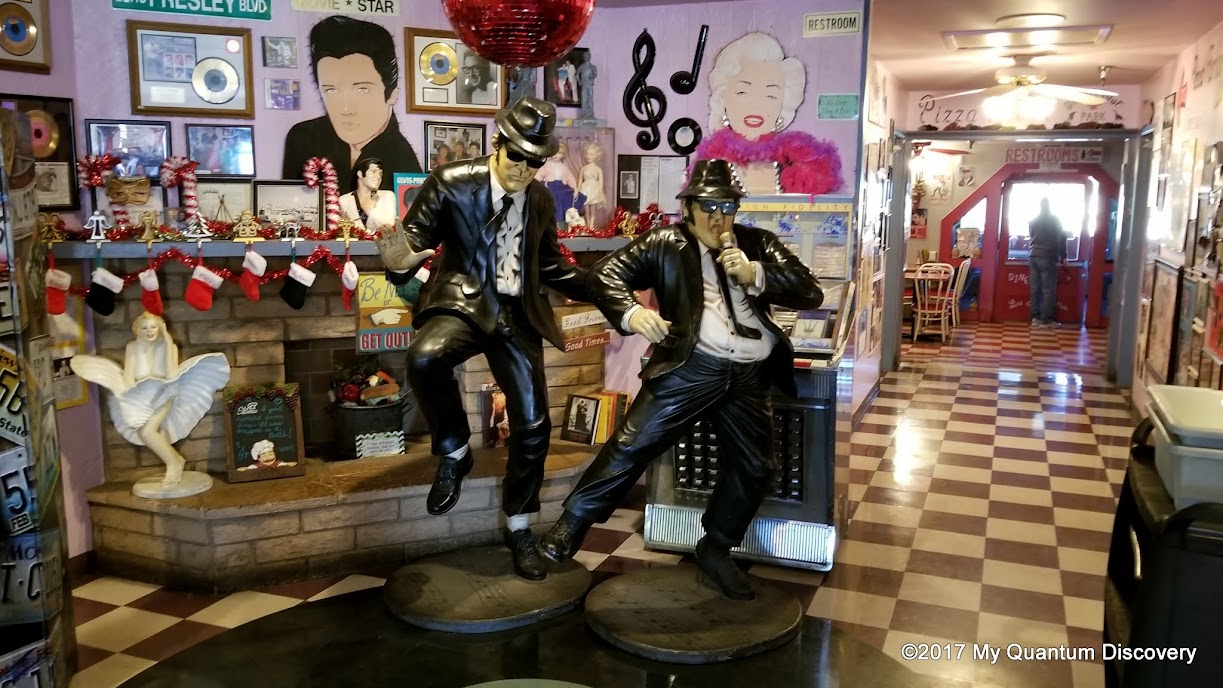 Outside there’s the Diner-saur Park, which Peggy Sue claims is reminiscent of some of the roadside parks in her childhood. Here you can come face to face with a Tyrannosaurus or Stegosaurus or Wiley Pirate. And then there’s a life size statue of 18 foot King Kong! 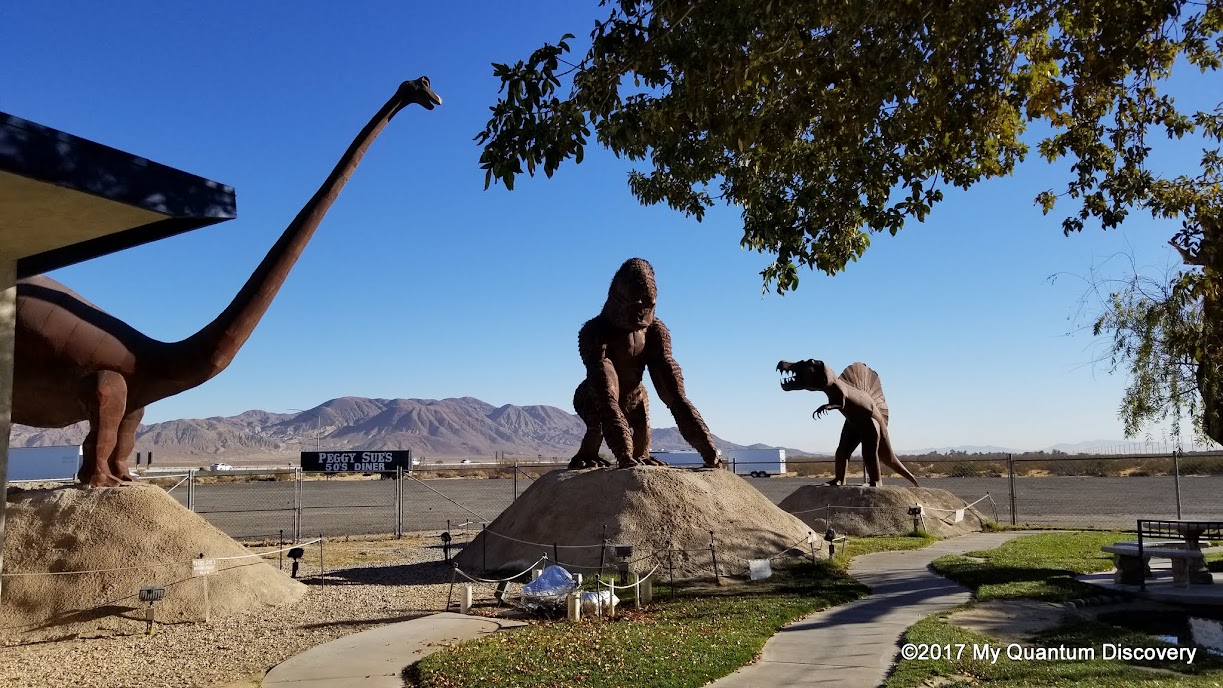 Heading back inside, we went inside the 5 and Dime Store. Yikes! What a treasure trove! Definitely not your typical souvenir shop! Whether you are interested in superheros, Disney characters, celebrities, Route 66 or even Elvis memorabilia and trinkets, you’ll find it here. 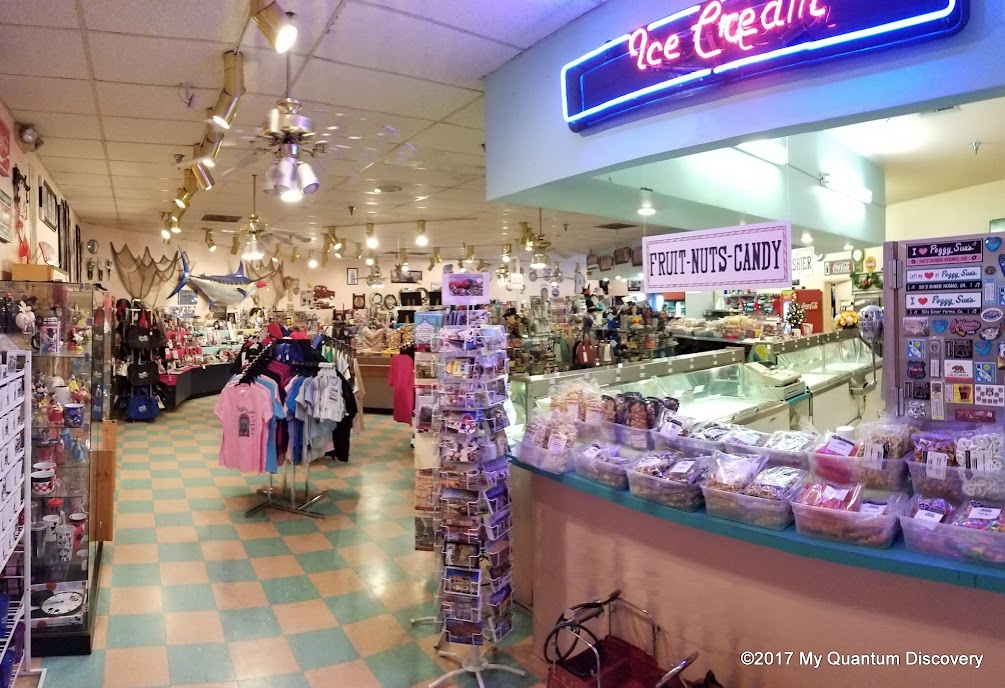 Certainly this was unlike any breakfast restaurant we’ve been too before! Even if you don’t want to have breakfast, lunch or dinner here, it’s certainly worth a visit!

After breakfast we were on our way towards our next destination, Rancho California in Aguanga where we stayed last February. This would be our home for the next three months. We were looking forward to seeing old friends, meeting new ones and staying put in one place for awhile…