Note: This mod was performed on a 2017 model Aquahot 400D, however it will also work with the 450D and most other models with a Webasto burner.

The Aquahot model 400D in our 2017 Entegra Aspire provides both heat and hot water for our rig. It is a hot water (hydronic) system fired by a diesel fuel burner (very similar to an oil burner in a sticks and bricks home) and also has a supplemental electric heating element. The diesel and electric can be independently activated by switches inside the coach.

Since the Aquahot is consuming diesel fuel from the main diesel tank, I was interested to know as precisely as possible, how much fuel it was consuming. I wanted to know this for purposes of more accurately calculating the engine fuel consumption, because the Aquahot and Generator diesel fuel usage would otherwise skew that result. Admittedly though, the main reason is the nerd in me just wants to know!

The Aquahot does not have any built in method for measuring total fuel used, nor does it have any means of tracking how often or how long the burner runs. The specifications indicate this model will consume 0.4 gallons per hour, so if I could track the actual run time I should be able to get a pretty good idea how much fuel is being consumed. 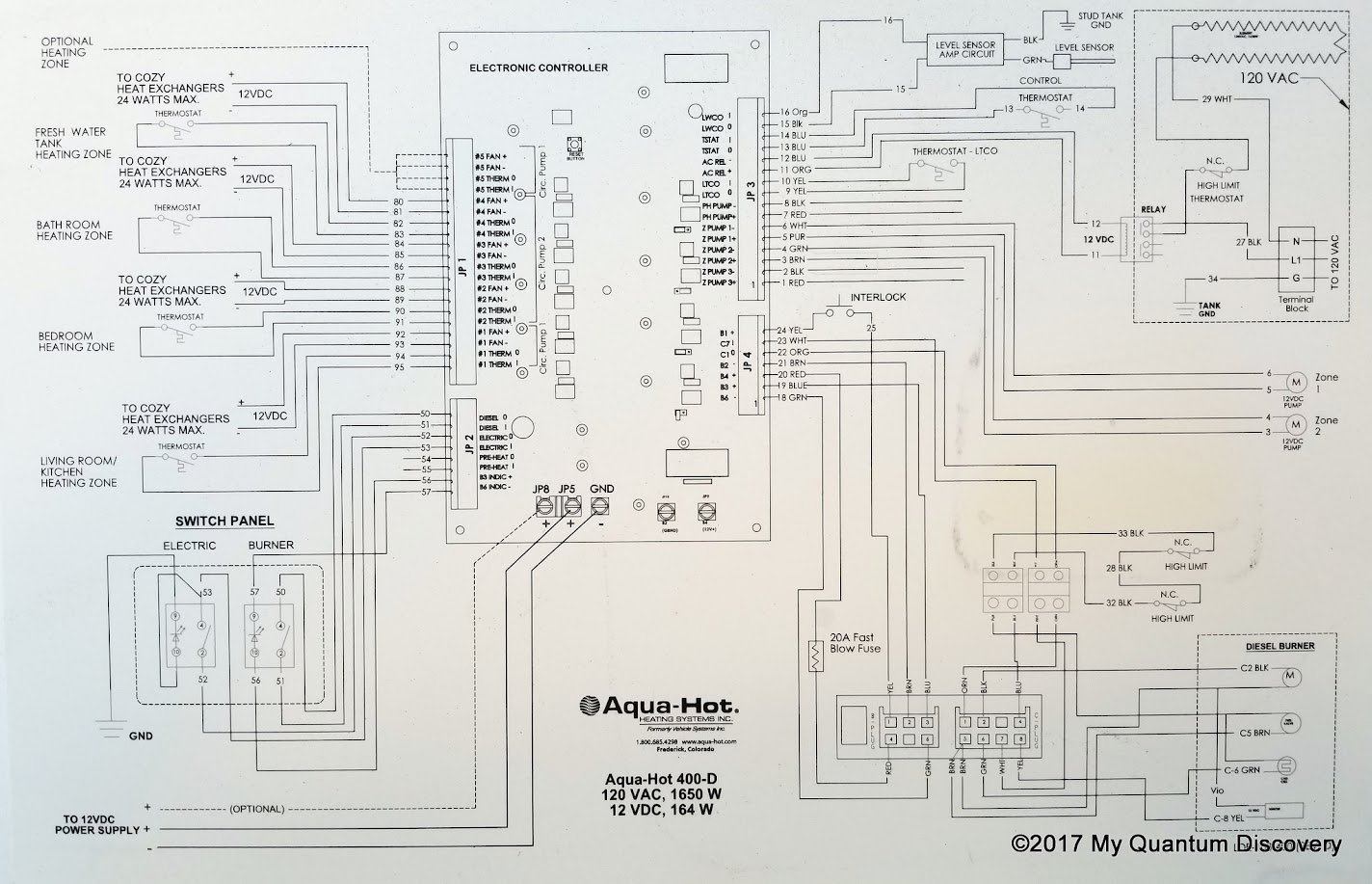 After studying the schematics for a bit I found that there is an electrically operated solenoid that opens to feed fuel to the burner when the controller calls for it to fire up. When the solenoid is active, that is the only time actual fuel is being consumed, so tapping that signal to drive an hour meter should provide a reasonably accurate measure of run time. 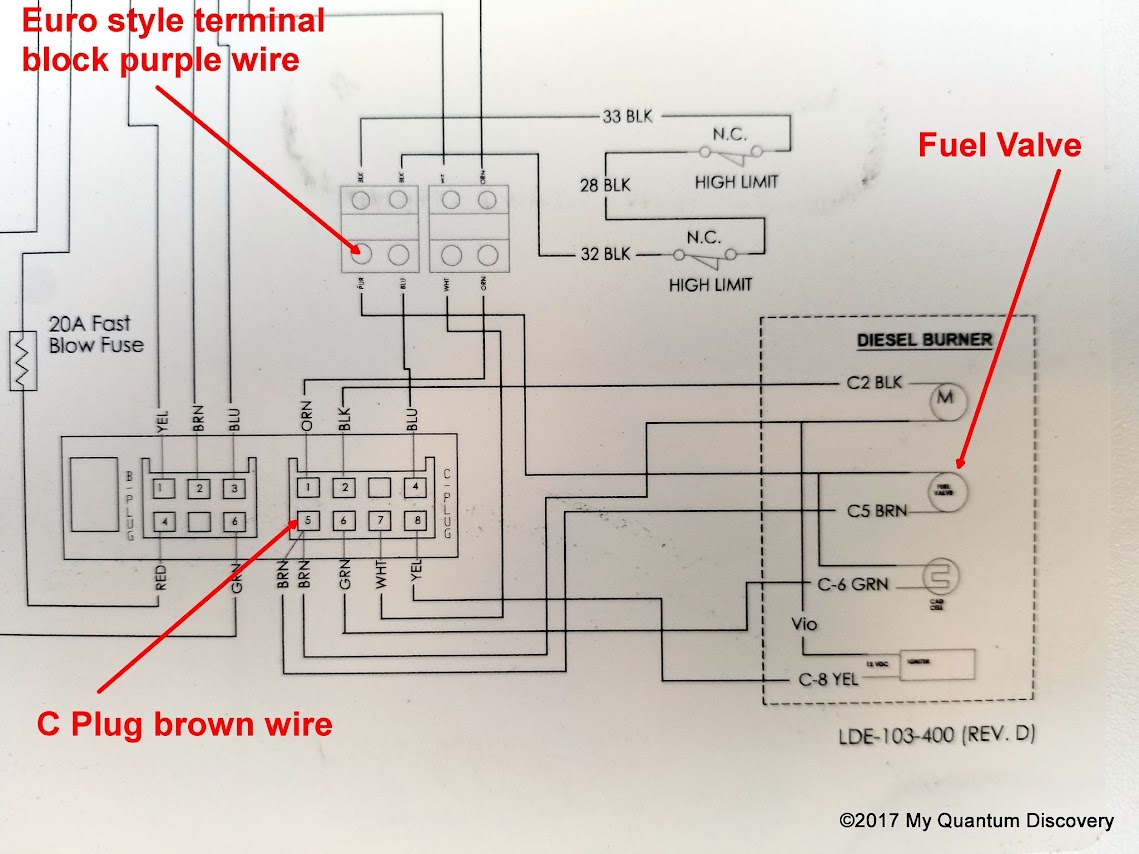 The hour meter I purchased is a standard electro-mechanical style used in a variety of applications. It requires a 12-36 volt DC activation voltage and uses very little energy. Basically it is a quartz movement similar to a digital watch. It will count time as long as it has power. Since the display is mechanical, the values it has accumulated can be viewed at any time regardless if power is supplied to the meter or not.

Finding the actual Aquahot electrical connection points for the meter would be the next challenge. Again, using the schematic I determined the insulation color for the solenoid wires I was seeking. These are the wires coming from the “Fuel Valve” and are brown (-) and purple (+). The solenoid operates at the Aquahot system voltage which is 12 volts DC which is within the hour meter voltage range.

Exactly how I tapped into the wiring is described below. Of course before connecting anything I tested the tap points with a DVM and temporarily hooked up the hour meter to be sure it would work as planned. It did. While at it I measured the current draw of the hour meter which was about 1.2mA – practically insignificant considering a typical single LED indicator draws about 10mA. When the digits flip on the hour meter there was a spike of about 7mA.

UPDATE 1/24/2018: The blue and purple wires should not be attached to the burner or burner harness (or should have quick disconnects added) because during annual service the burner assembly needs to be removed for cleaning and adjustment.

The below photo (click to expand) shows an overview of the connection points and the final wiring.

Note that the fuel valve is inside the burner, but both the identified wires fortunately terminate at connection blocks outside of the burner. It was at these connection points that I tapped the fuel valve wiring. The purple wire was super easy as it terminated in a euro style plastic terminal block which has screw clamps – all I had to do was loosen the clamp and slip in a new wire for the hour meter positive terminal (photo below).

The brown wires were terminated at a female spade type connection inside the “C Plug” terminal block. The C Plug is one of two plugs on the bottom of the controller module and is the one furthest away from the front of the Aquahot. The photo below shows a closeup location of the C Plug.

To tap the brown wire, one option would be to use an insulation displacement type wire tap on the exposed wire section, but I am not a fan of those, particularly in this case where there will be large temperature and other environmental variations which could compromise the connection integrity. Instead I popped the spade out of the terminal block and tack soldered a wire to the shank of the connection. The spade is held in the terminal block with a spring clip and can be released from the front of the connector plug by gently pressing with a small flat or pointed tool.

Next I ran my wires along other wiring and out thru a grommet in the Aquahot cover where all the other wiring exits and zip tied everything securely in place. Then I found a convenient place to mount the hour meter in the Aquahot bay and the project was done! Not including research time, the project only took about a half hour.

Eventually, plans are to relocate the hour meter to the instrument cabinet in the half bath where it is more conveniently accessible to take readings.

It’s too early to give solid performance data, but so far we have logged about 72 hours of burner time in 75 days (from 9/17/2017 – 12/1/2017). That’s on average almost 1 hour of burner runtime per day, or 0.4 gallons of diesel fuel usage per day. Conditions during this period included just a few warm/hot days with the majority of the weather being cool or cold at night. We also experienced about a week’s worth of sub freezing nighttime temperatures as well. See the sidebar below for info on how we use our Aquahot, as that is certainly relevant to the consumption numbers.

So far I can say definitively that running the burner for morning showers typically requires it to run about 12 minutes total (0.2 hours) and consumes about 0.08 gallons of diesel per day. The rest of the daily usage (average 45 minutes/day) would be for heating. Watch this space for updates as time goes by and we gather more usage data under various conditions.

How we use our Aquahot

The diesel burner can output 65000 BTU's which supplies adequate energy for the 4 heating zones on the coach (living room, bed/bath, tank bay/basement & floor heat) and can also supply domestic hot water indefinitely at an average 1.2 gallons per minute flow rate.

In warm weather the electric element will support multiple successive showers as long as the flow rate is not too high (we control that with a valve on the showerhead). However, we do find it is best to activate the burner under the following conditions: