No Thanksgiving dinner in a Walmart parking lot for us! Despite striking out at several other RV parks, we were able to make a reservation for a 10 day stay at Vista Del Sol RV Resort, a 55+ gated adult retirement community and RV Resort in Bullhead City, AZ. Guess next year we’ll have to plan better!

Prior to being purchased by Roberts Resorts, this community was limited to a development of single homes which had gone bankrupt. It was Roberts Resorts who expanded the resort by developing sites for RV’s. 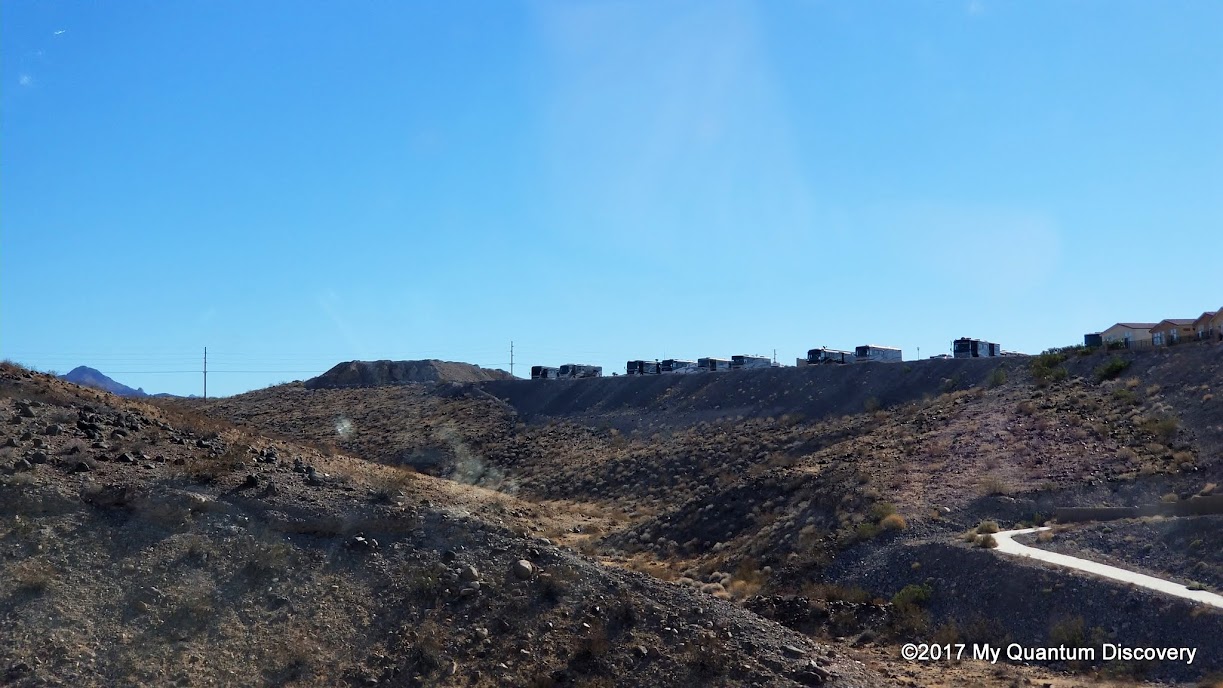 Vista Del Sol RV Resort is on a hilltop, with tiered sites so no matter what site you are on, you have a view. From our drive in site (#6) we had lovely views of the mountains, beautiful sunrises/sunsets and the distant twinkle of lights of the casinos across the river in Laughlin, NV at night. There is a lovely clubhouse with two swimming pools, a hot tub, pool tables, sitting area and an exercise room. A review will be forthcoming. 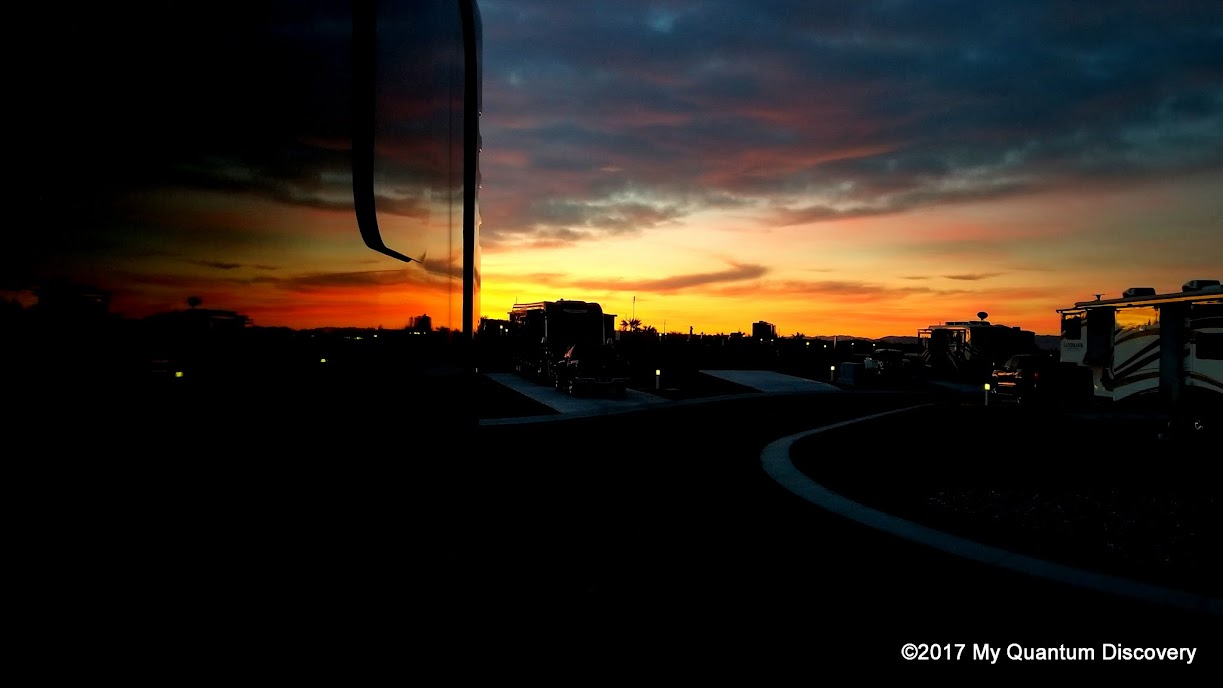 Once we were settled in there, it didn’t take long for us to understand why they had availability when other places didn’t. It was the wind and the unbroken exposure on top of the hill. When I say wind I don’t mean an occasional gust, but a pretty constant 20-25+ mph with gusts up to about 40 mph or more.

Several times, the howling woke us up in the middle of the night, winds so bad that the slide room on the windward side was visibly moving along the top edge. That coupled with the slide toppers flapping like a jib in irons forced us to bring in some of our slides so nothing would get damaged. Over the course of our 10 day stay, we probably had to bring in the slides three or four times, sometimes leaving them in for most of the day.

Even opening the entrance door was tough, requiring shouldering it open. The temperatures weren’t nice, maybe a tad on the coolish side, but because of the wind it wasn’t comfortable sitting outside. From talking to staff there as well as other people, it seems that this is typical for the area.

Not a whole lot of exciting things to report here! Part of our week was spent doing mundane tasks – shopping for supplies, catching up on blog posts (I’m almost there!!), eating out, relaxing and doing a little sightseeing. Rob was able to complete a few small projects on his honey-do list. Guess it was nice to have a little down time.

After a delicious brunch at the nearby Black Bear Diner (our new favorite chain) where I had an enormous Taco Salad ($10.99) and Rob chowed down a Volcano ($9.99) – 3 cakes, 2 link sausage, 2 slices of thick-cut smoked bacon and 2 eggs, we set off to do a little sightseeing around Lake Mohave, check out a campground at Katherine Landing and then visit Davis Dam. 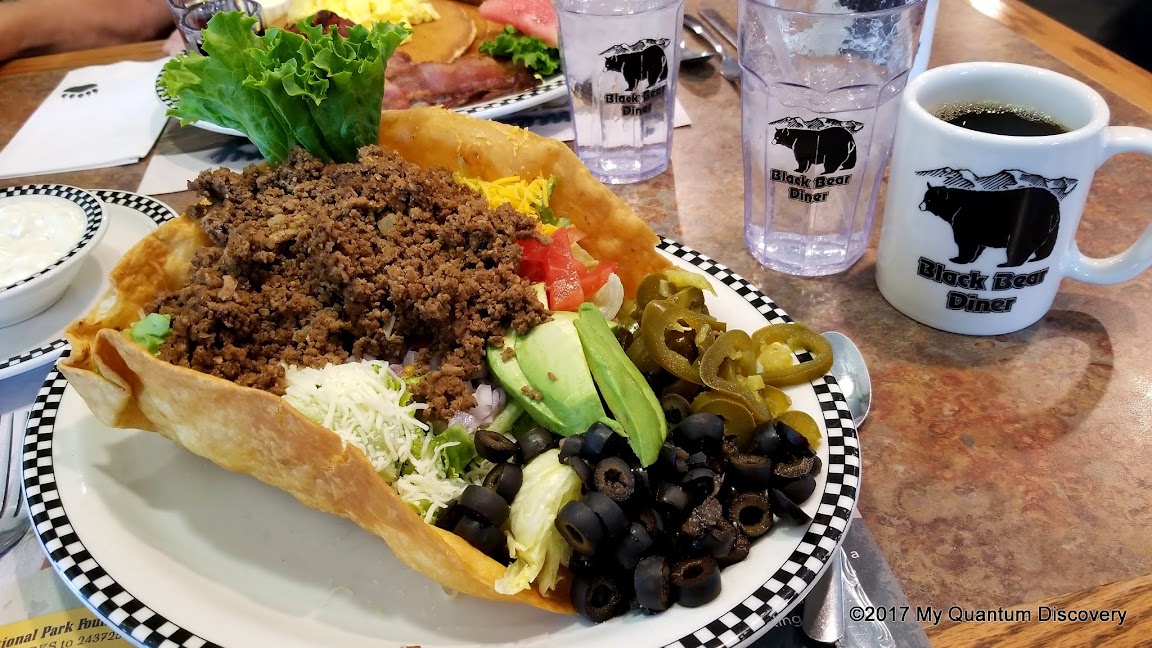 On the Arizona side of the Lake, we followed Katherine Spur to Lake Mohave Marina at Katherine Landing. Here we checked out the full hookup RV Resort but it only accommodates up to 40′ rigs and did not have much curb appeal so not a place that we would probably stay at in the future. 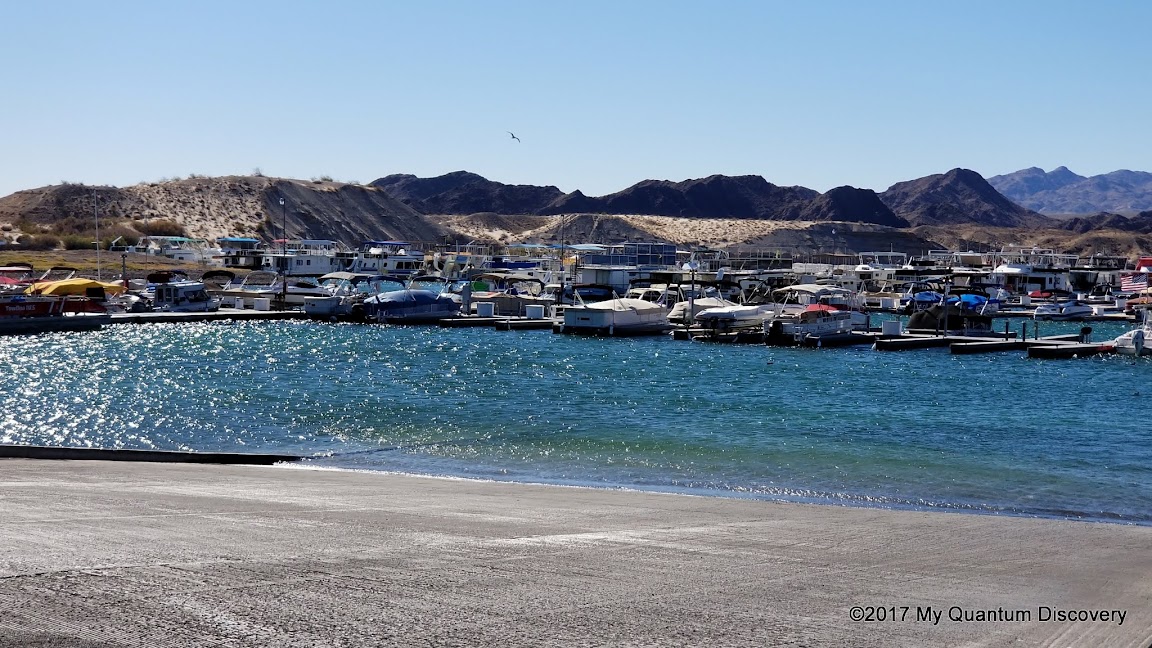 Continuing on, imagine our surprise when we encountered these cute critters!  Were they runaways from Oatman? First there was a mom and her baby… 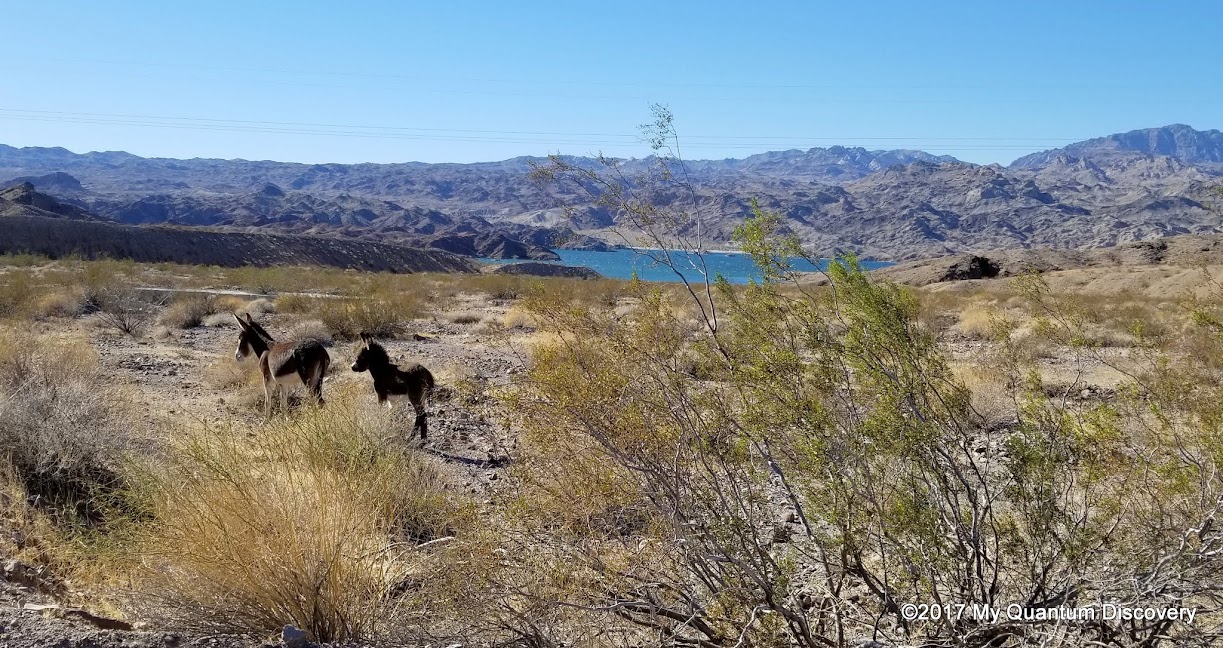 Then there was this guy, trying to get up close and personal, obviously looking for a handout. Sorry buddy, we have nothing for you! 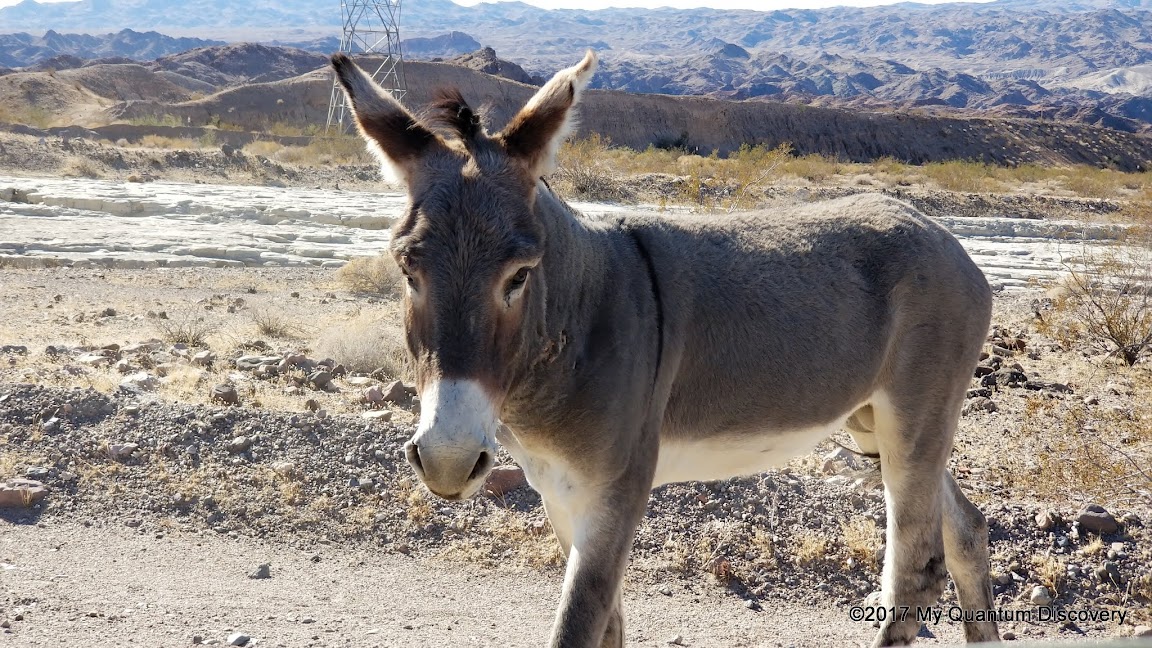 Located approximately 67 miles downstream from Hoover Dam is Davis Dam which was constructed by the Bureau of Reclamation and completed in 1951. Interesting to learn that Bullhead City was originally a construction town for workers building the dam. 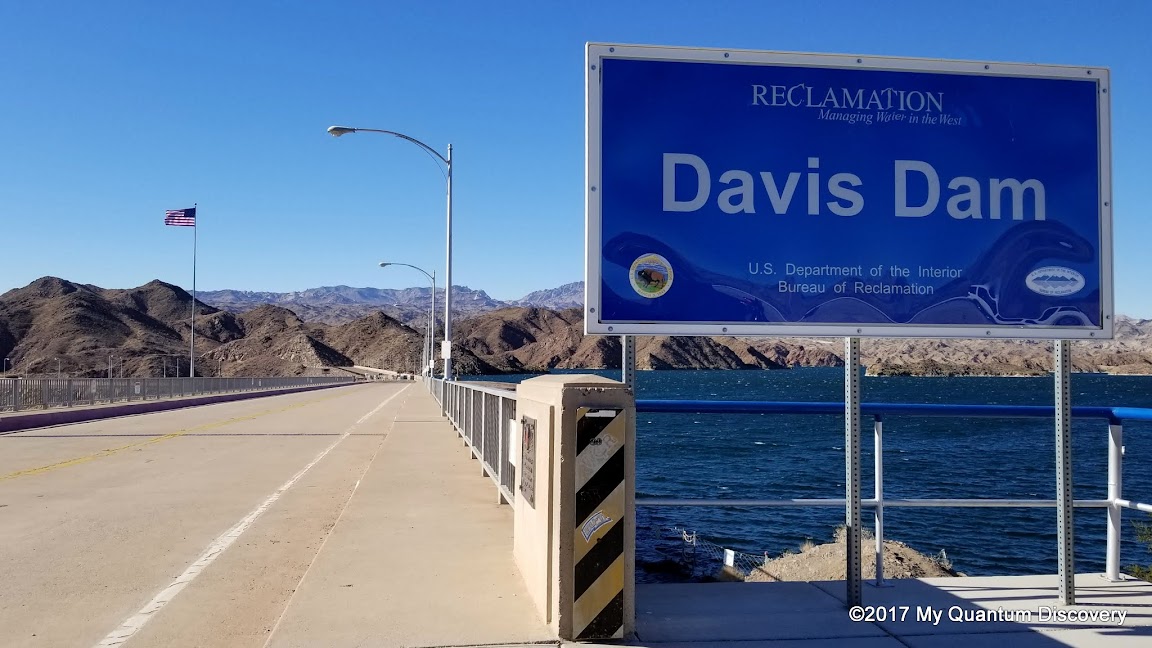 Originally called Bullhead Dam, it was later renamed after Arthur Powell Davis, who was the director of the U.S. Bureau of Reclamation from 1914 to 1923 and the nephew of John Wesley Powell, known for his expeditions on the Colorado River.

This dam created Lake Mohave, a narrow lake that is not more than 4 miles across at its widest point and part of the Lake Mead National Recreation Area. Lake Mohave extends approximately 67 miles along the valley from Hoover Dam to Davis Dam and is bordered by the steep walls of Pyramid, Painted, Eldorado and Black Canyons. A map of the lake is available here.

Unlike Hoover Dam which is an arch dam, Davis Dam is an earth and rock-fill embankment, 1,600 feet in length at the crest, a top width of 50 feet and 200 feet high with a concrete spillway, gravity structure, intake structure and powerplant. The dam’s purpose is to re-regulate releases from Hoover Dam upstream, and facilitate the delivery of Colorado River water to Mexico per the Mexico Treaty of 1944.The Davis powerplant cranks out an average of 1.25 billion kilowatt hours of electricity annually, enough to power more than a million homes. One of the signs mentioned that the dam is paid for – the bonds used to build the dam were retired in 2000, paid off by revenues from the electricity generated by the powerplant. 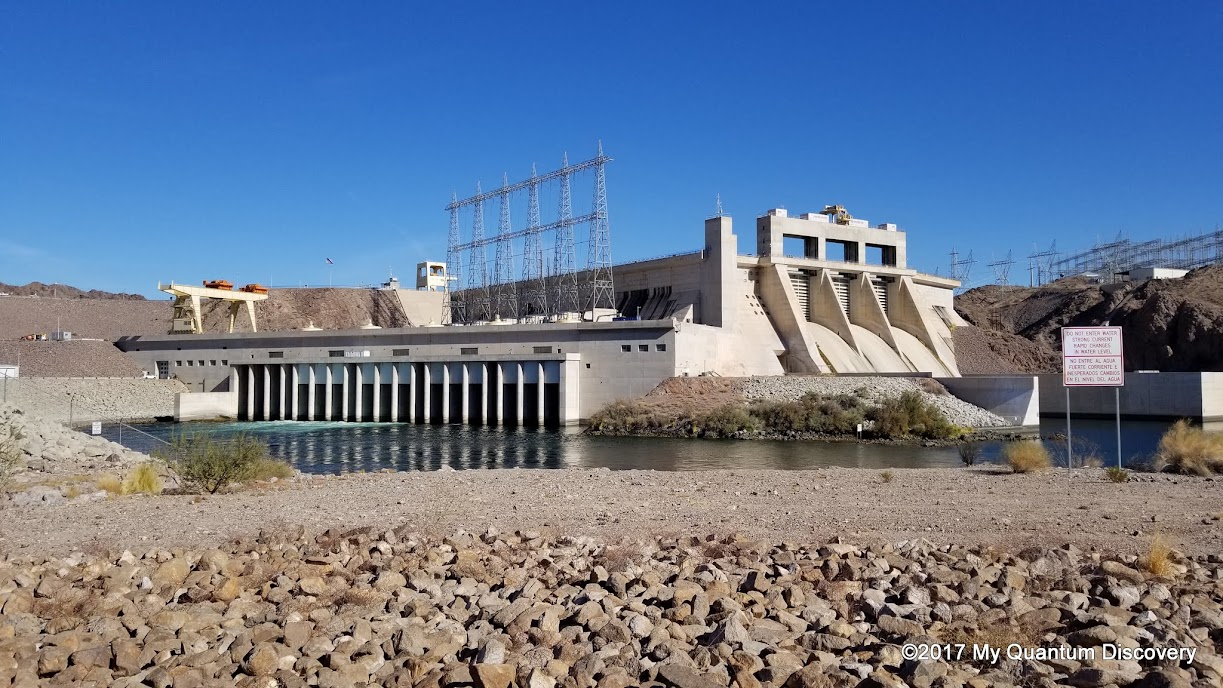 On another day, a 17 mile drive would take us to Needles, CA located on historic Route 66 where we planned on having breakfast/lunch at the Wagon Wheel Restaurant. Cute place with all sorts of Route 66 and western memorabilia hanging on the walls!  Wanting breakfast, Rob couldn’t resist the local favorite, Chicken Fried Steak ($10.99) while I opted for lunch with a Bleu Cheese Chicken Salad ($10.49), salad greens tossed with house made strawberry vinaigrette and topped with a sliced chicken breast, Bleu Cheese crumbles, pecans and diced tomatoes. Decent food! 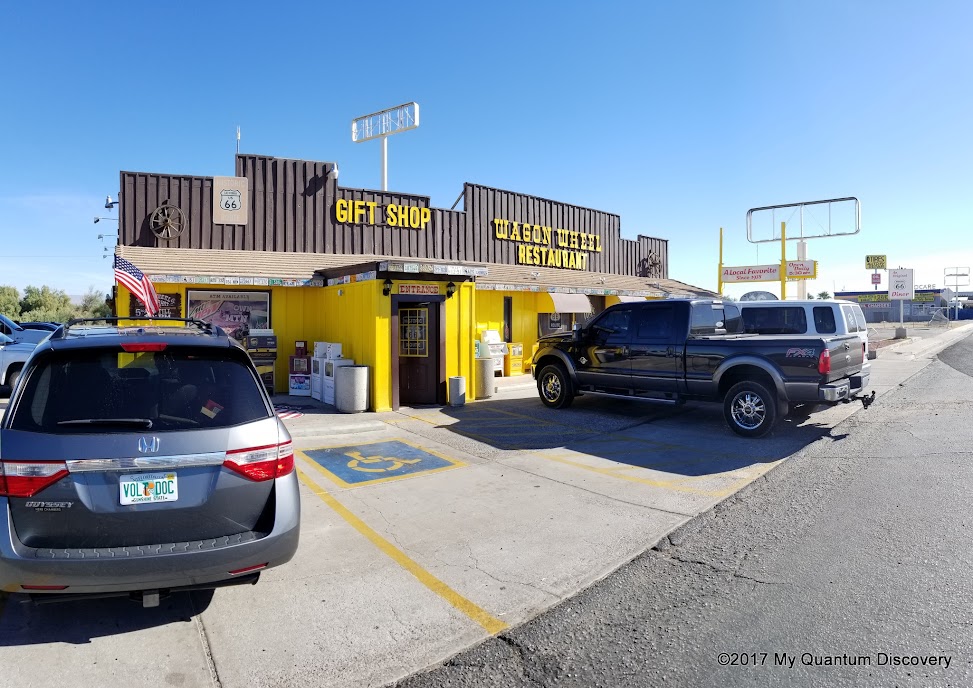 Founded in 1883 to support the Atchison, Topeka and Santa Fe Railway, the town was named for the nearby pointed mountain peaks. It was a major stop on the historic Route 66 highway from the 1920s through the 1960s. During the Dust Bowl era of the 1930s it was an important stopping point for travelers entering California searching for employment opportunities. Thousands stopped in Needles for gas and supplies before crossing the Mojave Desert. 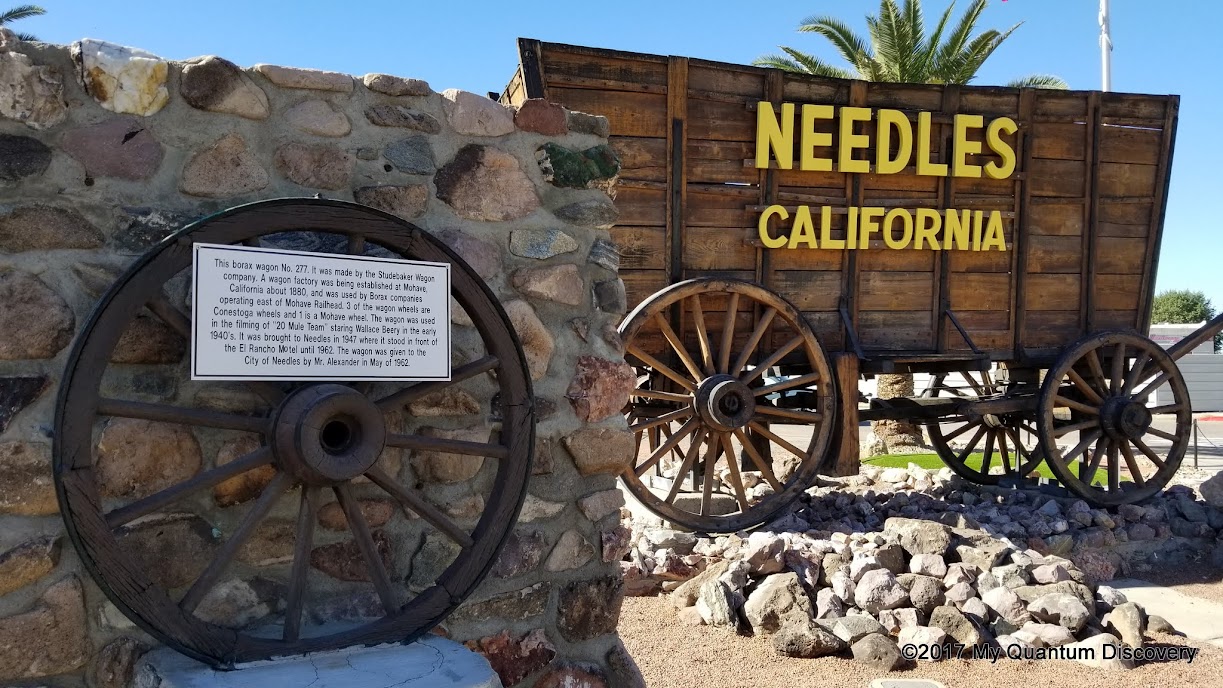 Since there didn’t seem to be much to see or do here except to check out a few nearby campgrounds, we headed back to Bullhead City. Along the way (on the Nevada side of the river) we stopped to take a walk on the Riverwalk Exploration Trails in Pyramid Canyon. Nice walk along the river with great views of the Davis Dam.

Returning back to the coach, we enjoyed a beautiful sunset. 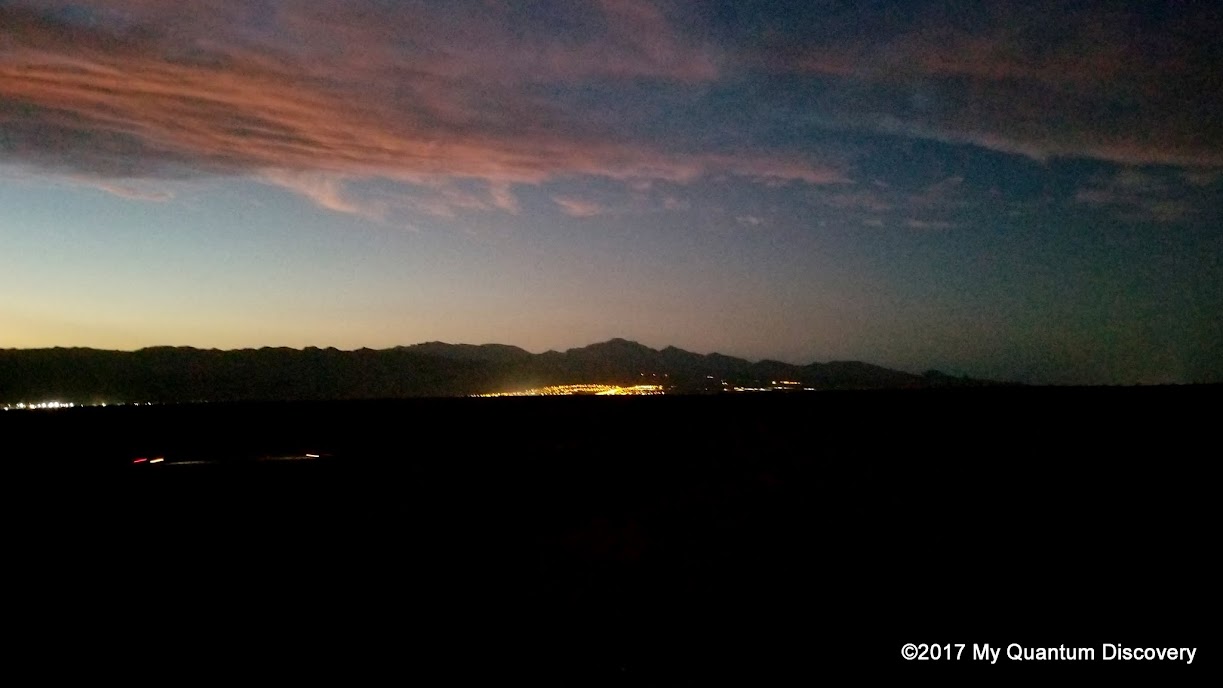 Can’t say that we were sorry to say goodbye to this resort. Too bad, it’s a lovely resort if only they had some control over the wind!

After this we were California bound. Stay tuned for where our next stop would be!