For our next trip leg, it would be a 2 hour drive heading east on I-10 and US-98 from Timbercreek Golf Club in Daphne, AL to our next destination, Henderson Beach State Park in Destin, FL.

This would be our first time staying at this park. We had tried a number of times over the years to make reservations here, but it was always booked solid. 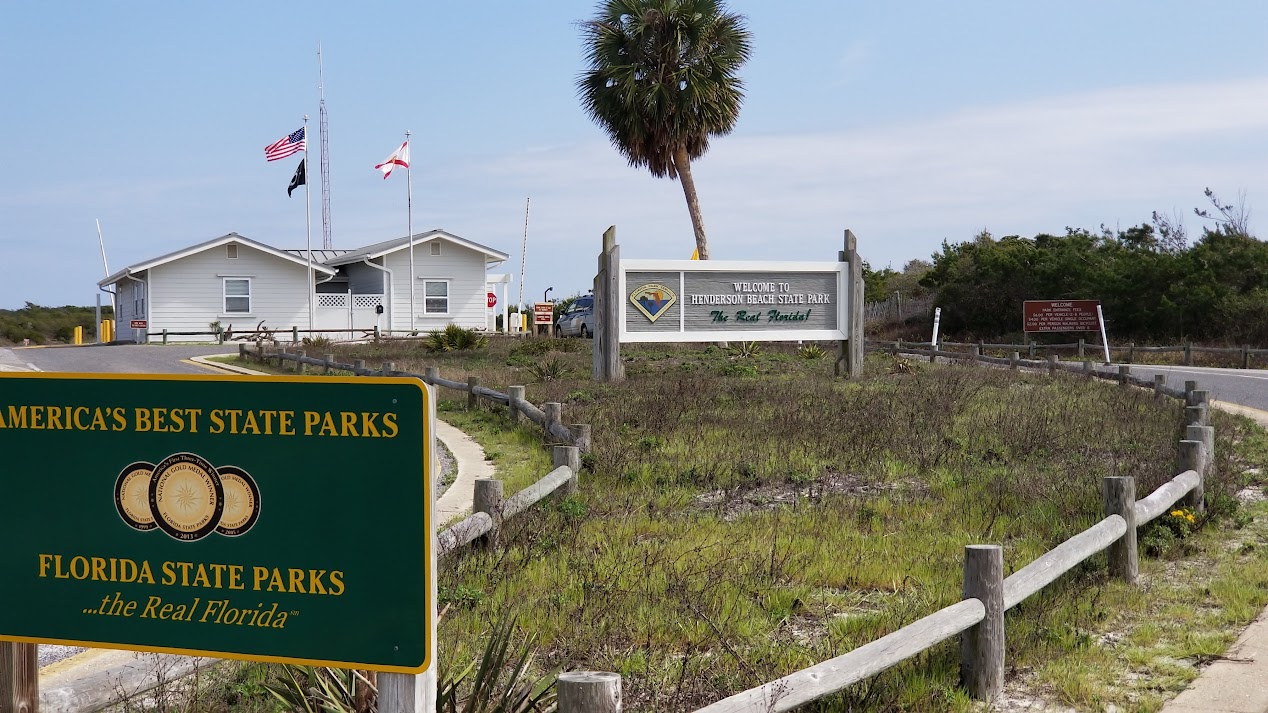 What a beautiful park! With 52 private wooded sites (and 2 tent sites), water and electric only, ranging in size from 30′ to 60′, this park can accommodate big rigs. 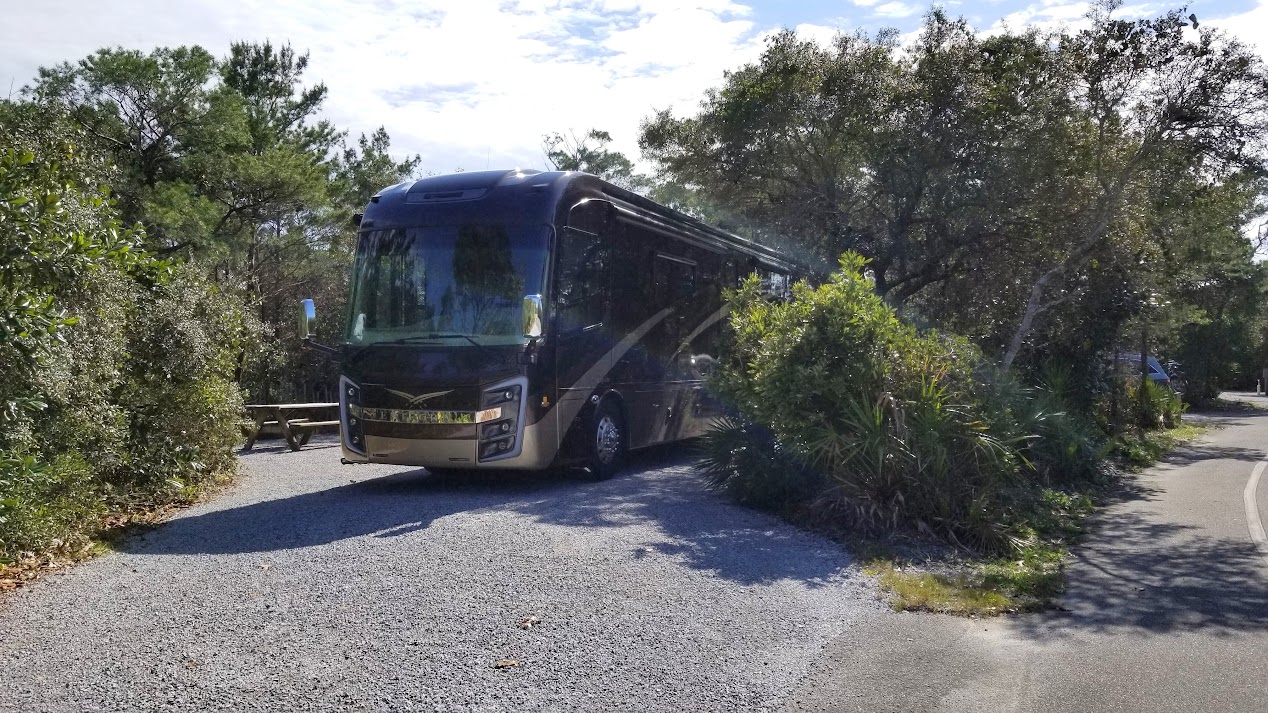 Both of our sites (1st stay pull thru #23 and 2nd stay back in #5) were quite spacious and were surrounded by natural flora providing us with total privacy. As is typically the case at many state and federal parks, we prefer the back-in sites. The pull-thru’s are sometimes difficult to maneuver as they tend to curve sharply and often aren’t as private (although here at Henderson virtually every site is totally private). 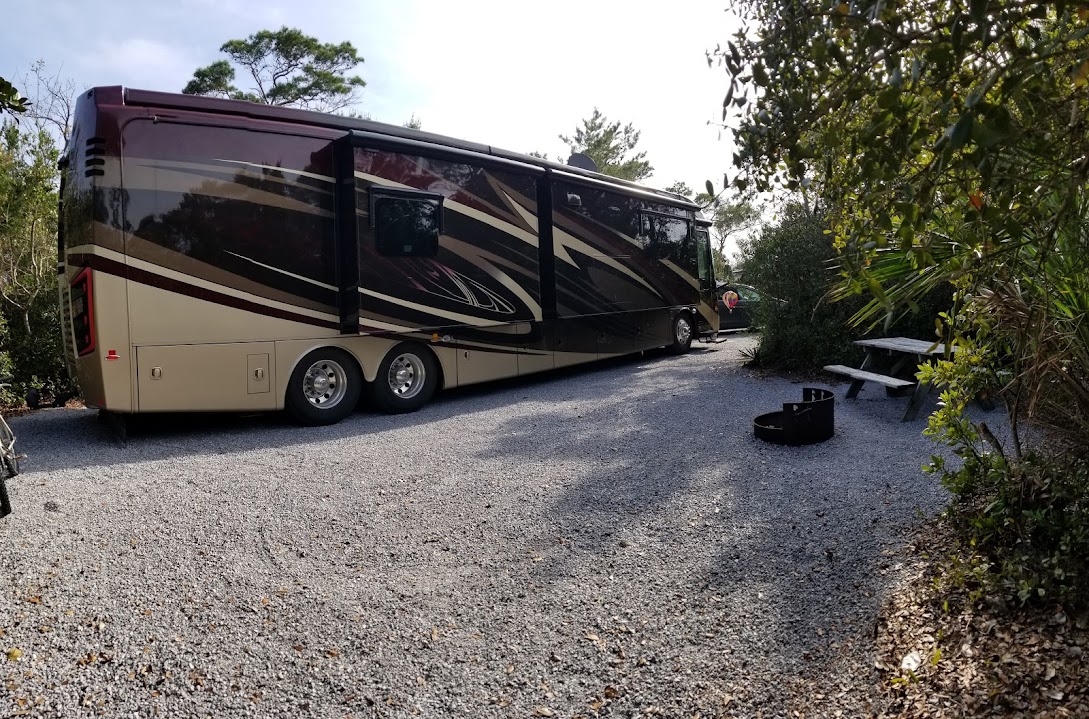 And even better – it was just a short walk to the boardwalk which leads to the emerald green water of the Gulf of Mexico bordered by a gorgeous white sand beach. 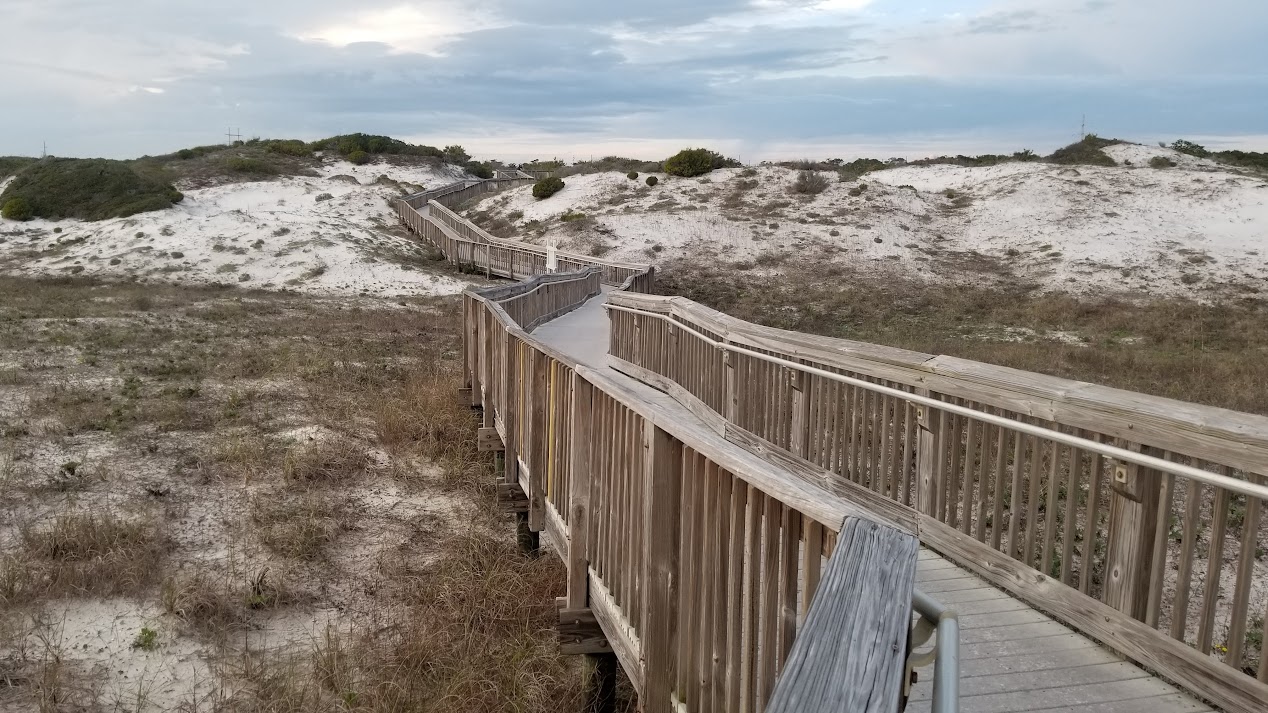 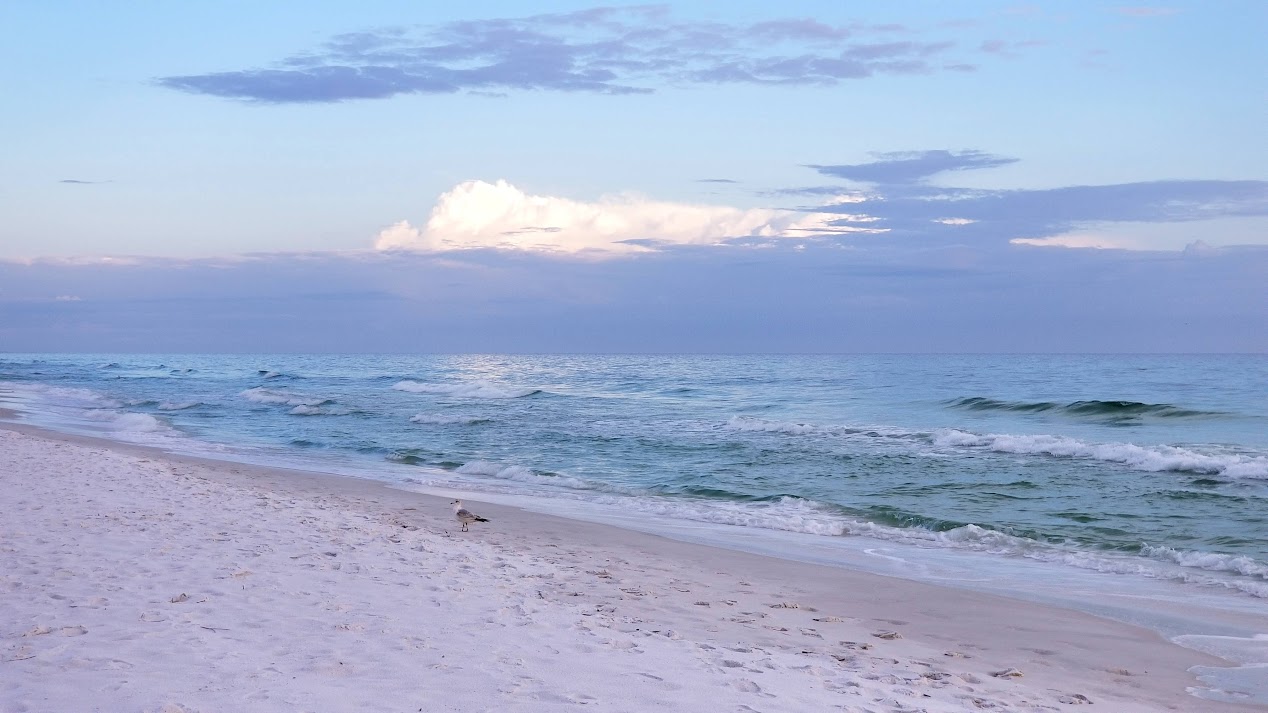 Beautiful during the day but even more spectacular as the day ended. 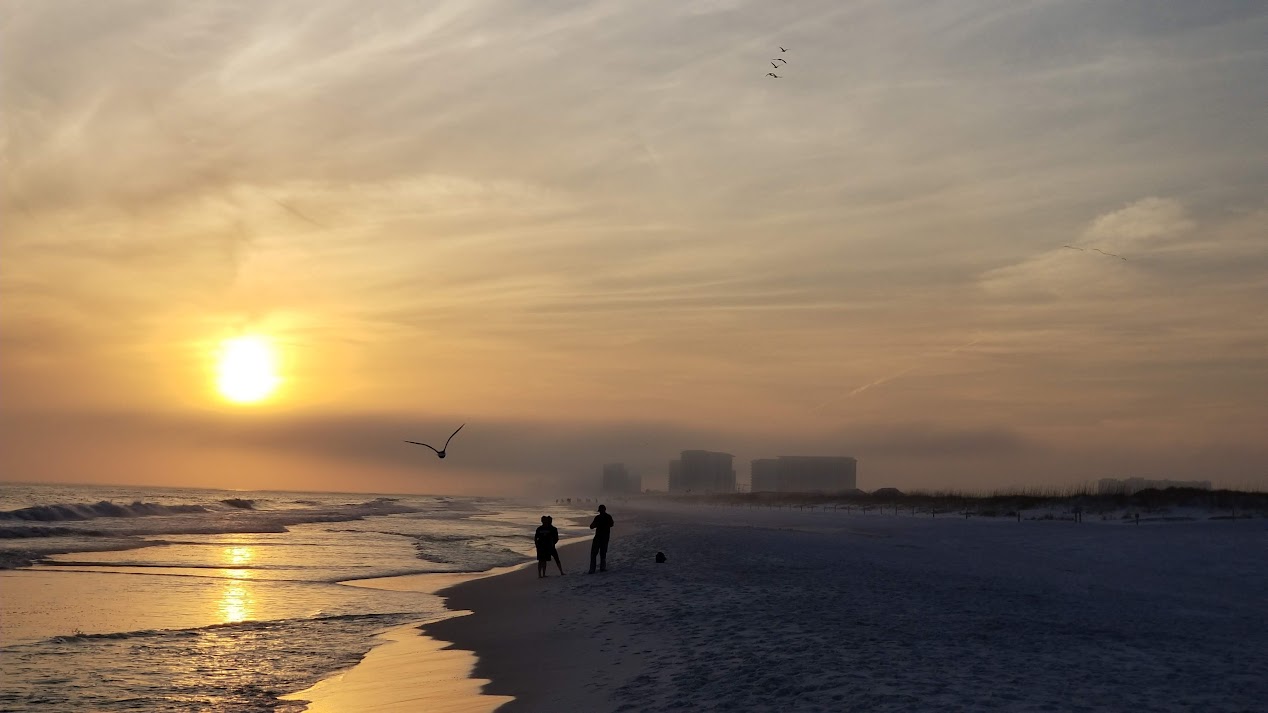 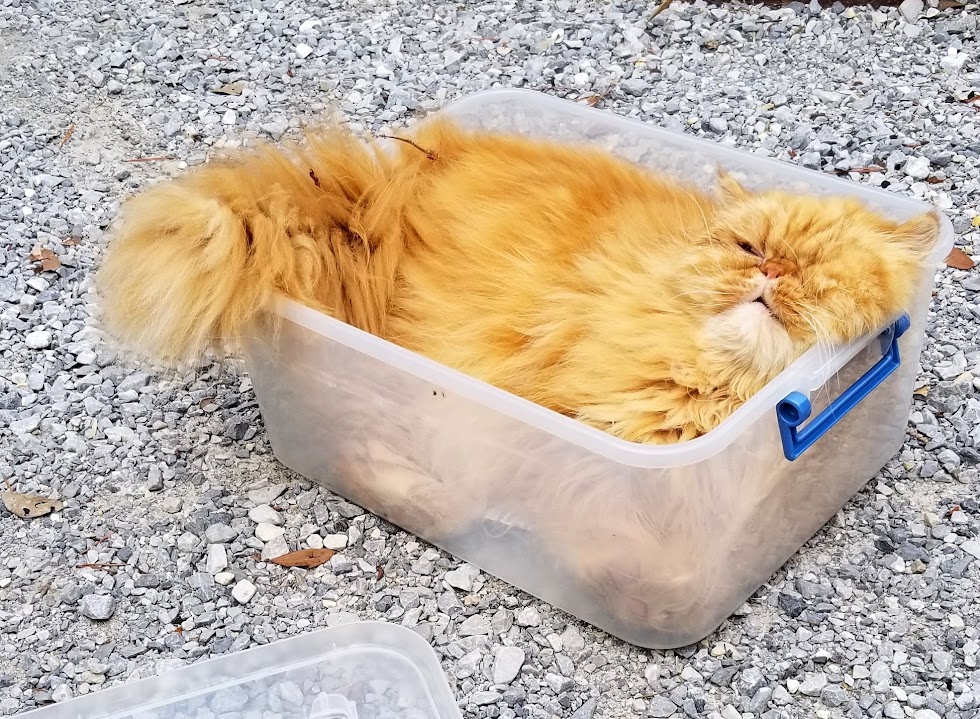 We didn’t do a lot, the usual errands and of course, some eating out. Another good breakfast at Mary’s Kitchen. At Pepito’s Mexican Restaurant we sampled two of their $7.99 lunch specials – burritos for Rob and a Pepito’s Bowl Special (grilled chicken atop lettuce, tomato, rice, black beans, green peppers, onions, shredded cheese and guacamole) for me. Cute place, excellent service, reasonable prices and good food! 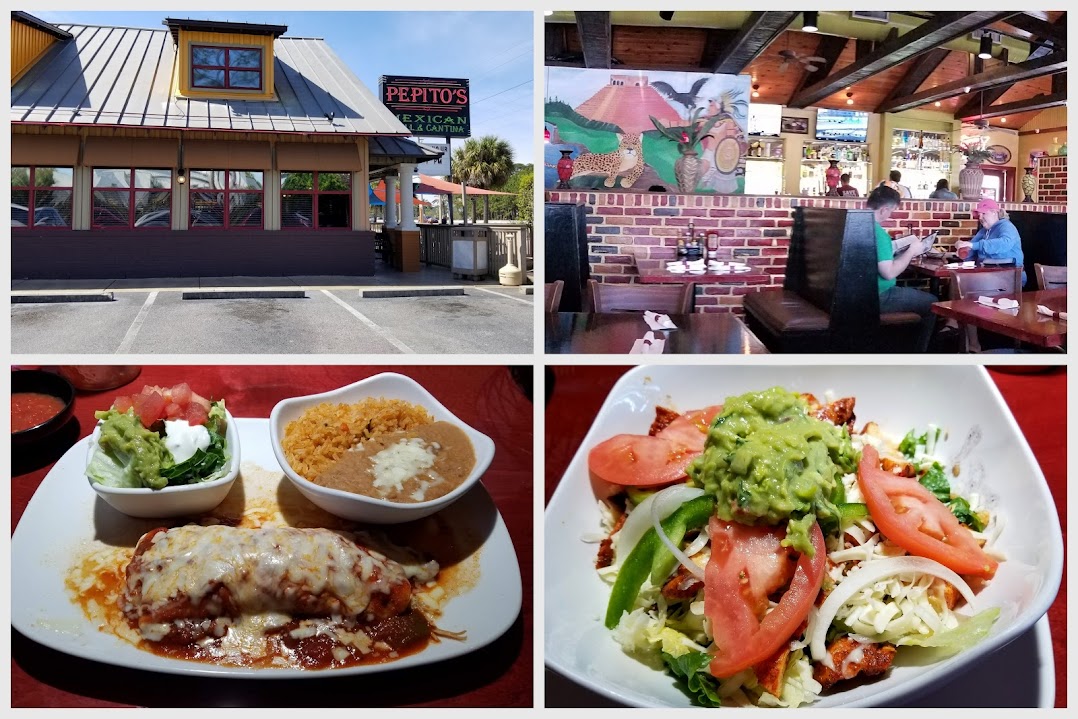 Betsy and Nancy were still work camping at Topsail Hill State Park so we met them for lunch one day at Pompano Joe’s Seafood House which is located right on the beach. 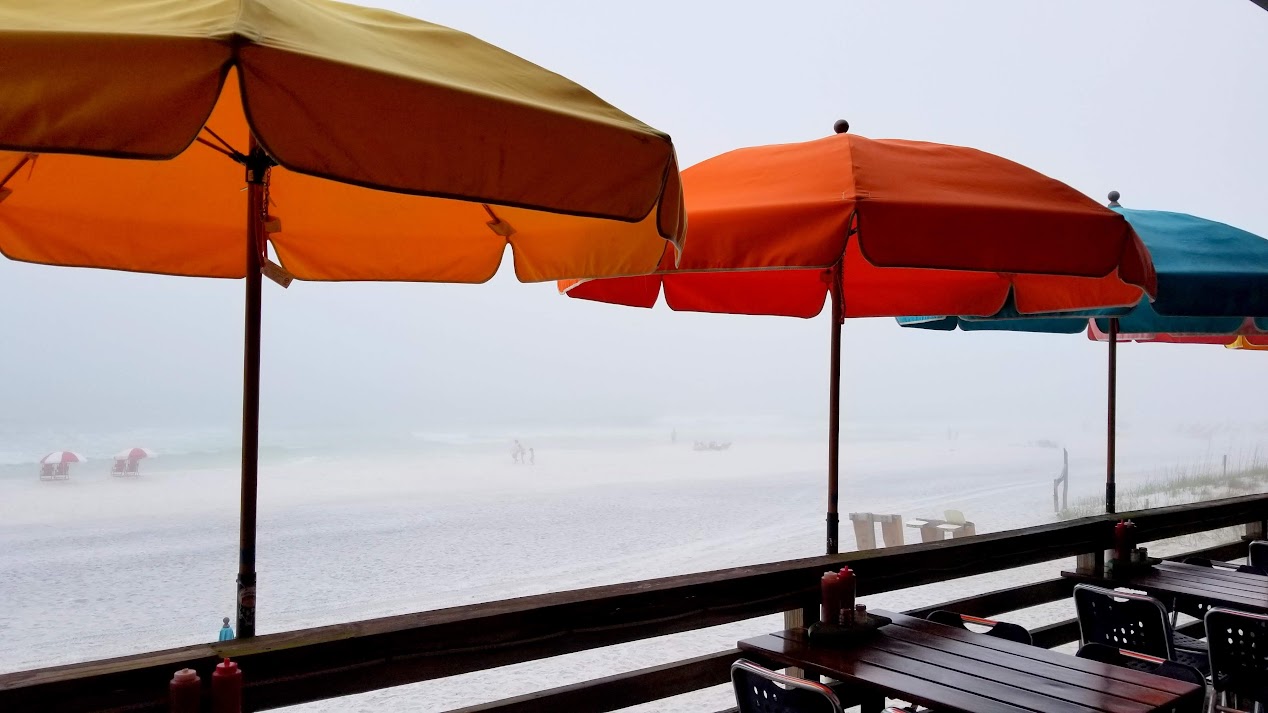 But, alas, no emerald green water while dining for us on that day, thanks to the fog! 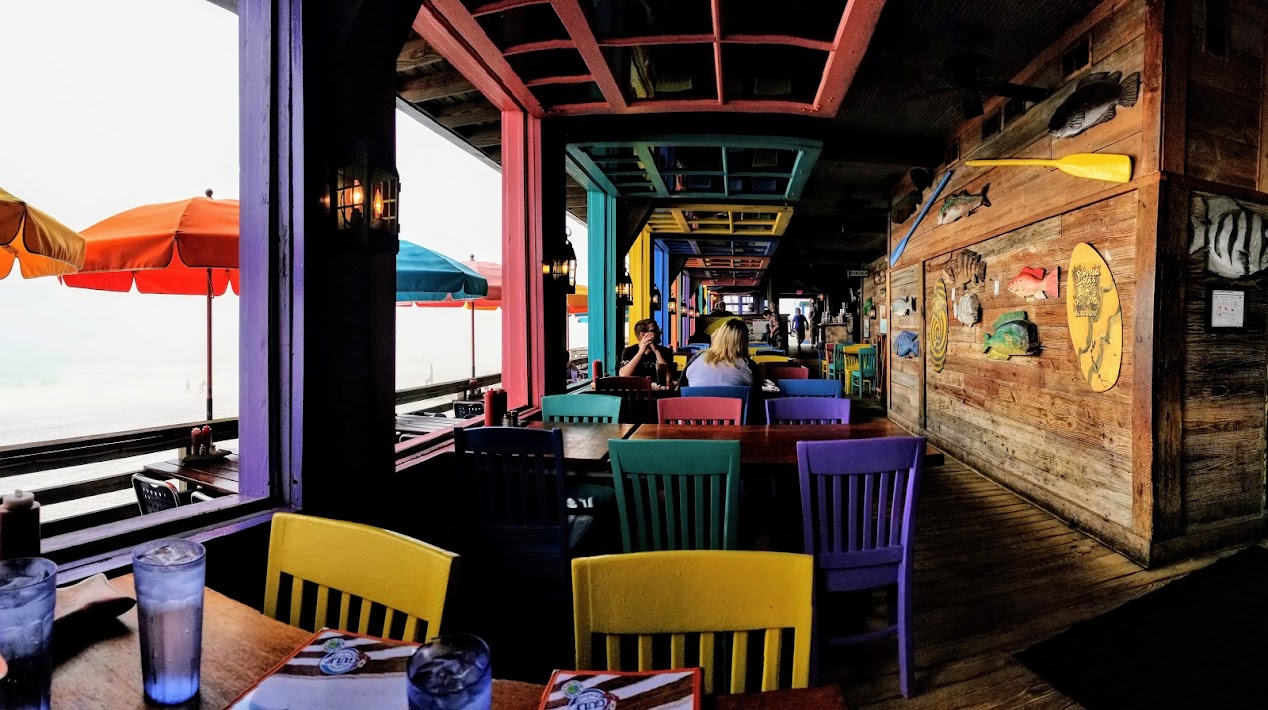 Blackened mahi mahi sandwiches ($15.49) served with pineapple slaw and french fries for both of us. Good food and great company. 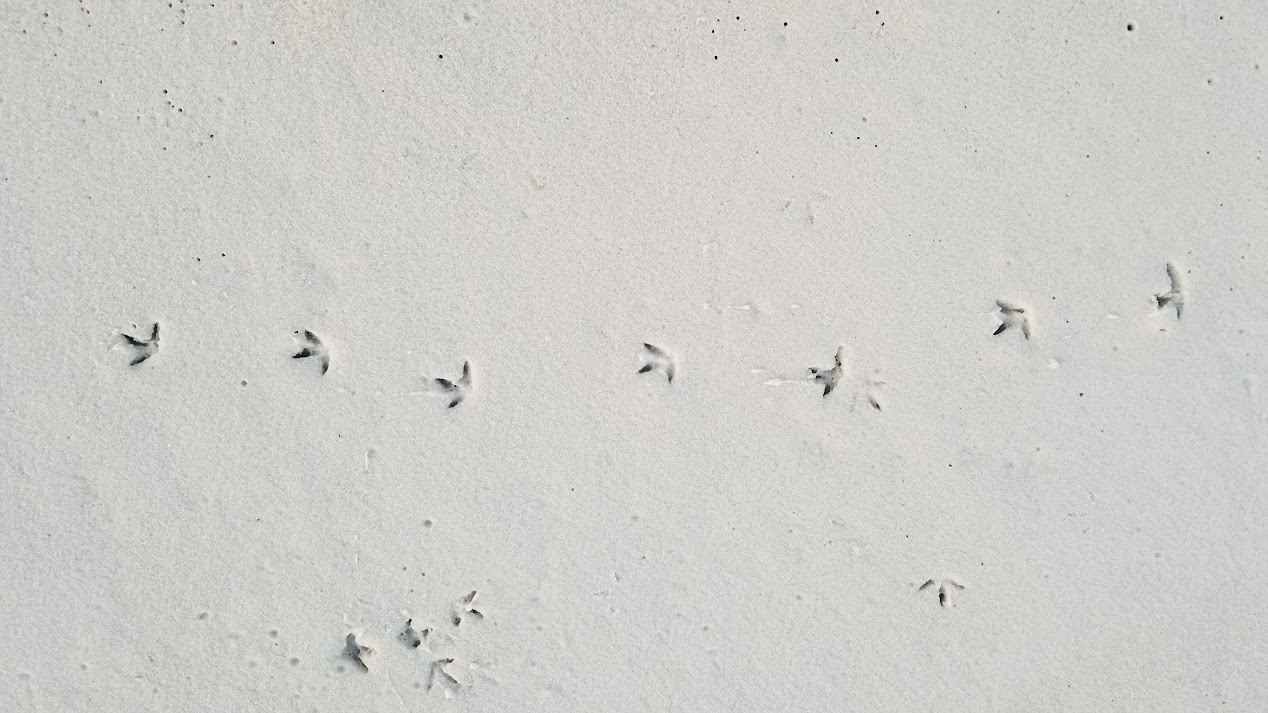 Now our first stay at Henderson ended on the 4th and our next stay began on the 8th so what did we do in between? To fill in the four night gap, we headed up to Twin Lakes Camp Resort in DeFuniak Springs, about an hour away. 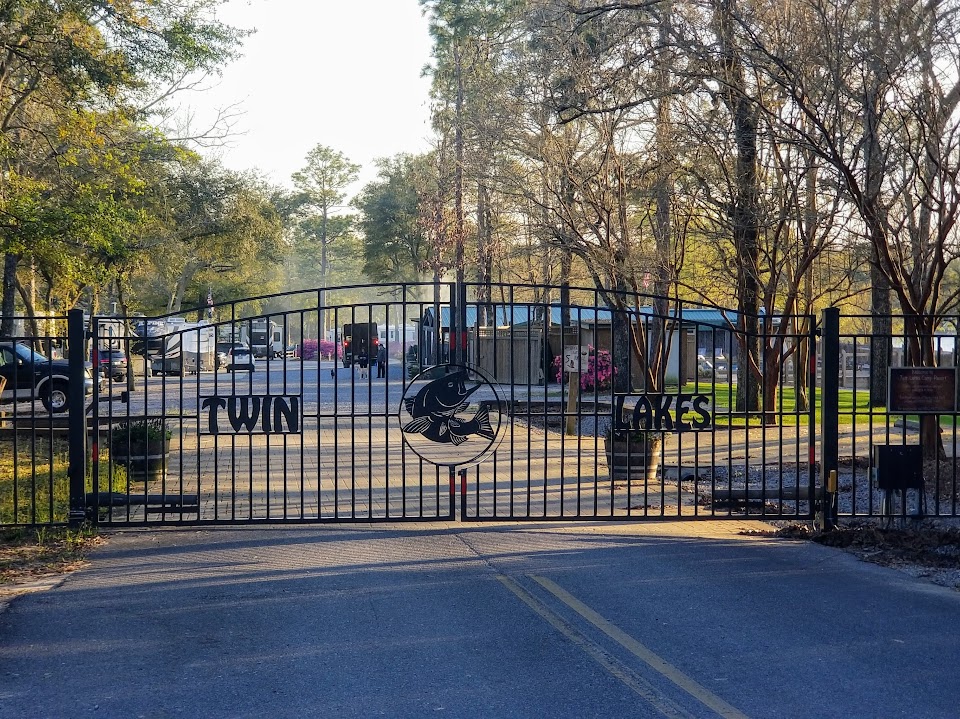 Lots of amenities here – laundry, pool, activities center, a boutique, boat and kayak rentals. We landed on pull thru site # T6 which is a great site. T7 is also a nice semi-private pull thru. 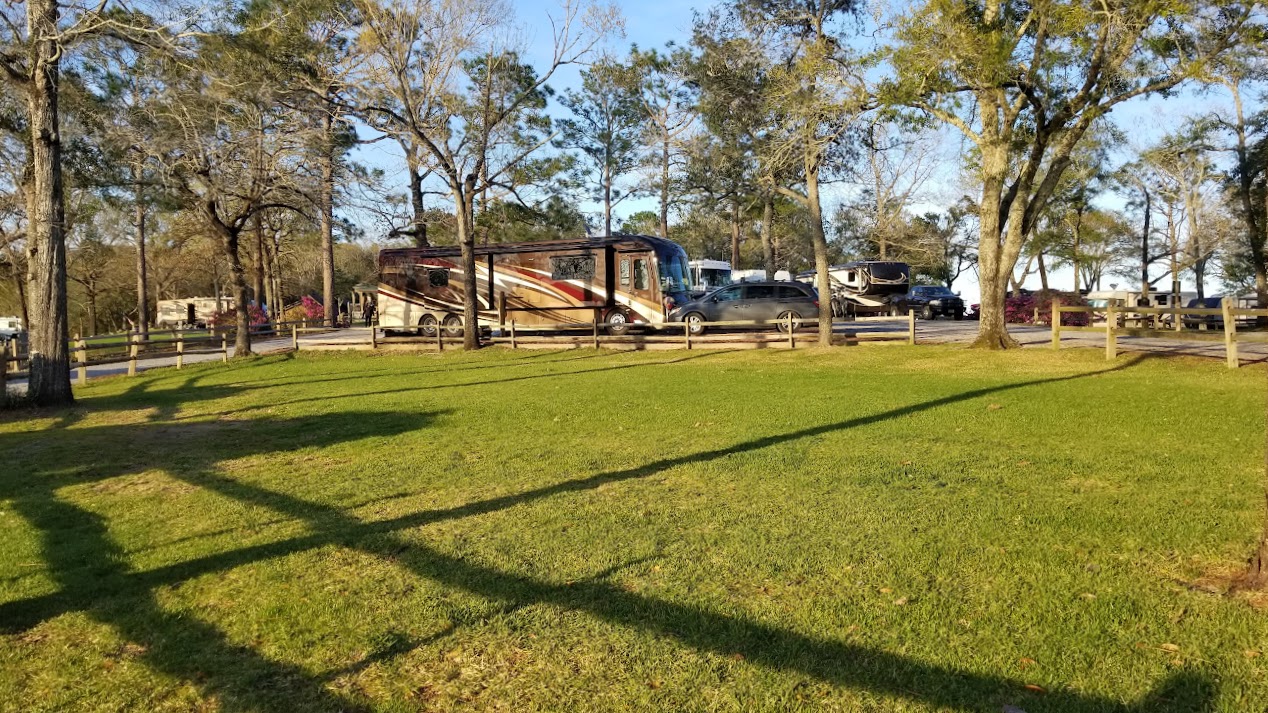 If you don’t have an RV, not to worry there are 5 cabin suites (2 suites allow pets) as well as 2 glamping tents (no children or pets allowed). 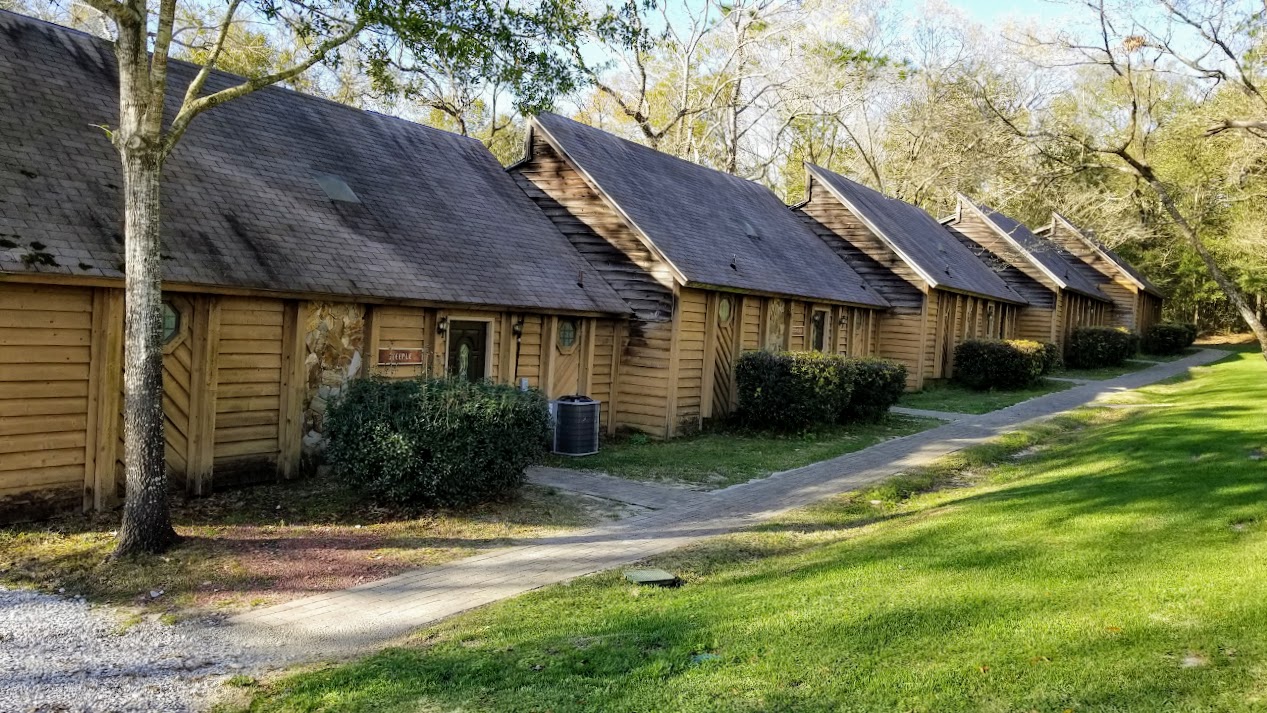 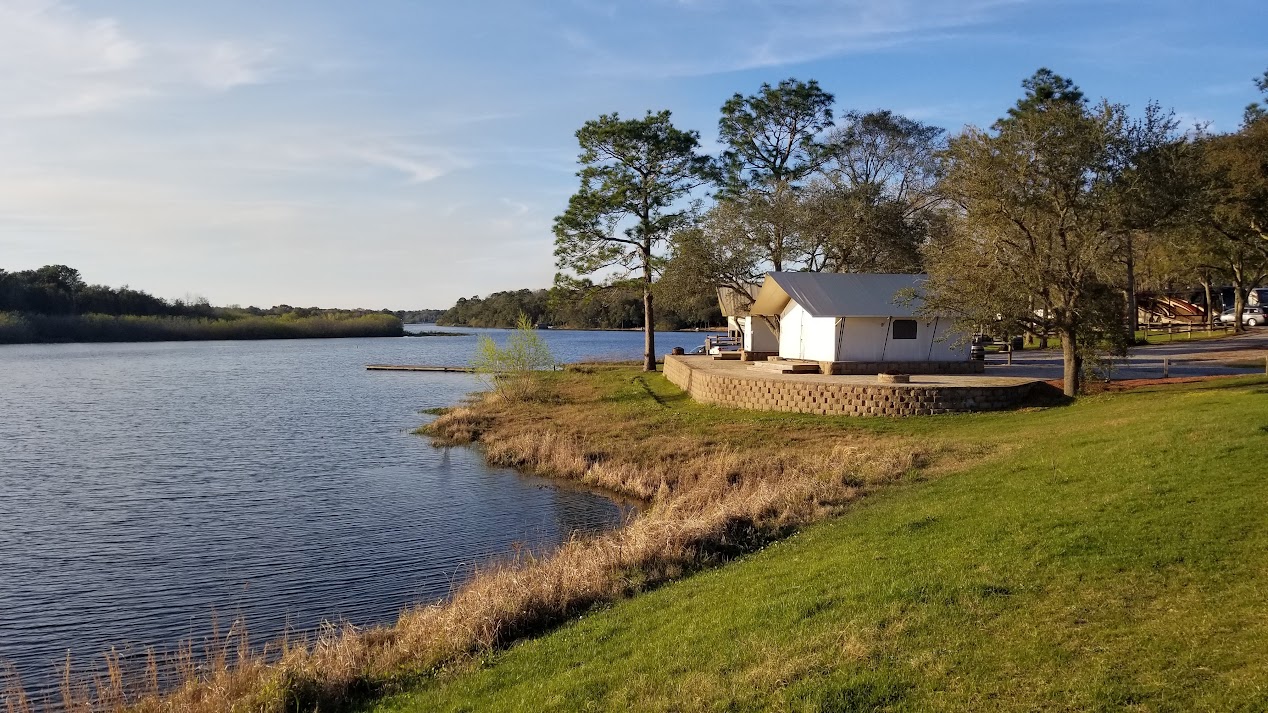 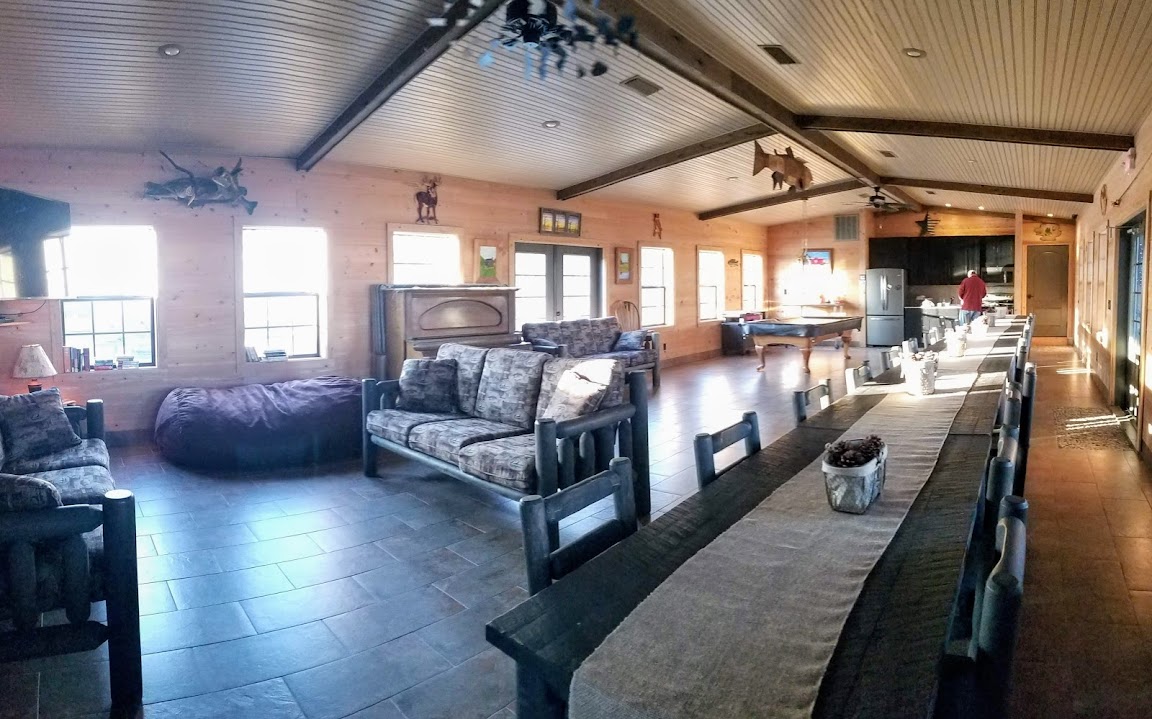 After our arrival, we headed out to explore the historic town of DeFuniak Springs (population 5500) which was named the best small town in Florida by MSN.com’s Insider Online. In the center of the DeFuniak Springs Historic District is Lake DeFuniak, one of the two almost perfectly round circular spring-fed lakes in the world (the other is in Zurich, Switzerland).

Along Circle Drive is the Chautauqua “Hall of Brotherhood” with its 4,000 seat auditorium, which was built in 1909. Chautauqua was an adult education movement in the United States, highly popular in the late 19th and early 20th centuries. In 1975, a tornado which was part of Hurricane Eloise destroyed the auditorium but left the grand entrance standing – it’s now available for weddings, exhibits and special events. Nearby is the Walton-DeFuniak Library which opened in 1887 and is the oldest continuously run library in the state.

Besides all of the Victorian homes and historic buildings, a different type of historic building can be found downtown. Established in 1947, H & M Hot Dog claims to be the 2nd oldest hot dog stand in continuous service in the U.S. How convenient that we were there a little after lunch time. Sampling the local cuisine is always a must do! 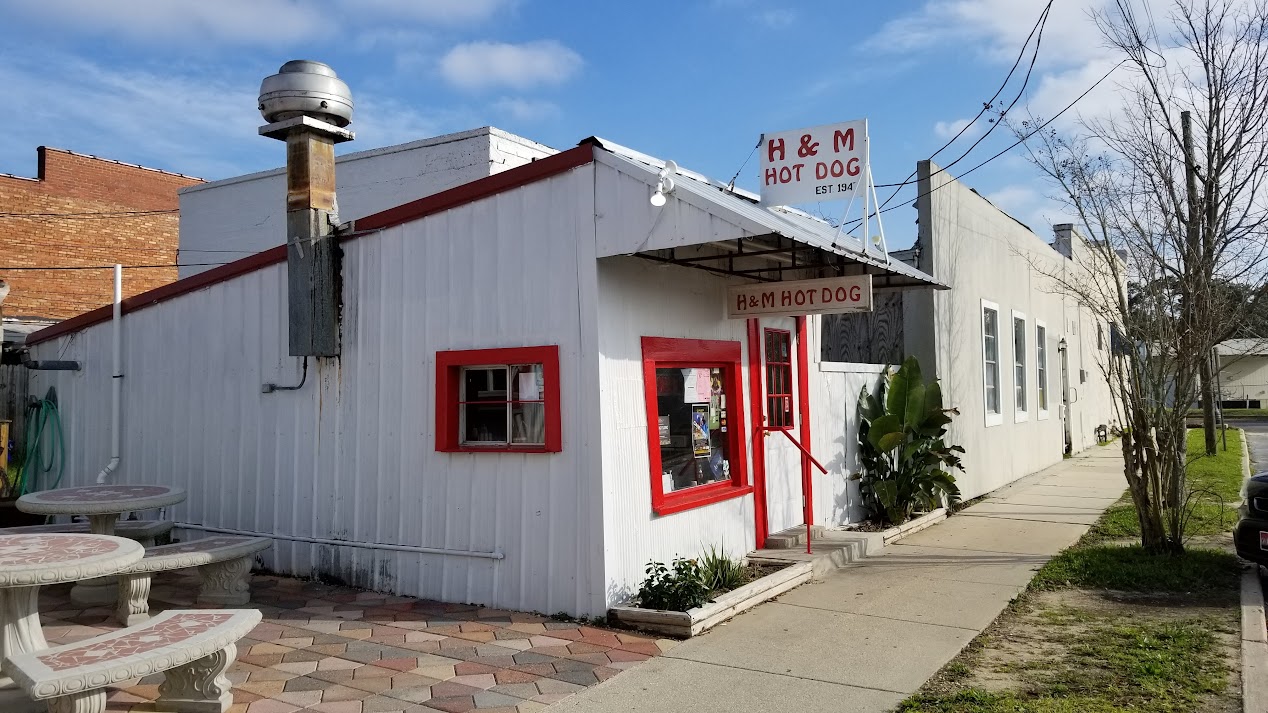 Not much to look at from the outside but it’s a very friendly kind of place, perhaps due to its small size (only seven stools), visited not only by locals but tourists from all over the world as well. When we asked what their most popular hot dog was, the unanimous answer was “the Chicago dog”. No idea what that was but we’ll take two. We quickly learned it was a steamed hot dog on a bun topped with mustard, chopped white onions, bright green sweet pickle relish, a dill pickle spear, tomato slices and topped with a hot pepper. Just looking at it made my tummy chant “quick give me a Rolaids”! But it sure was good! 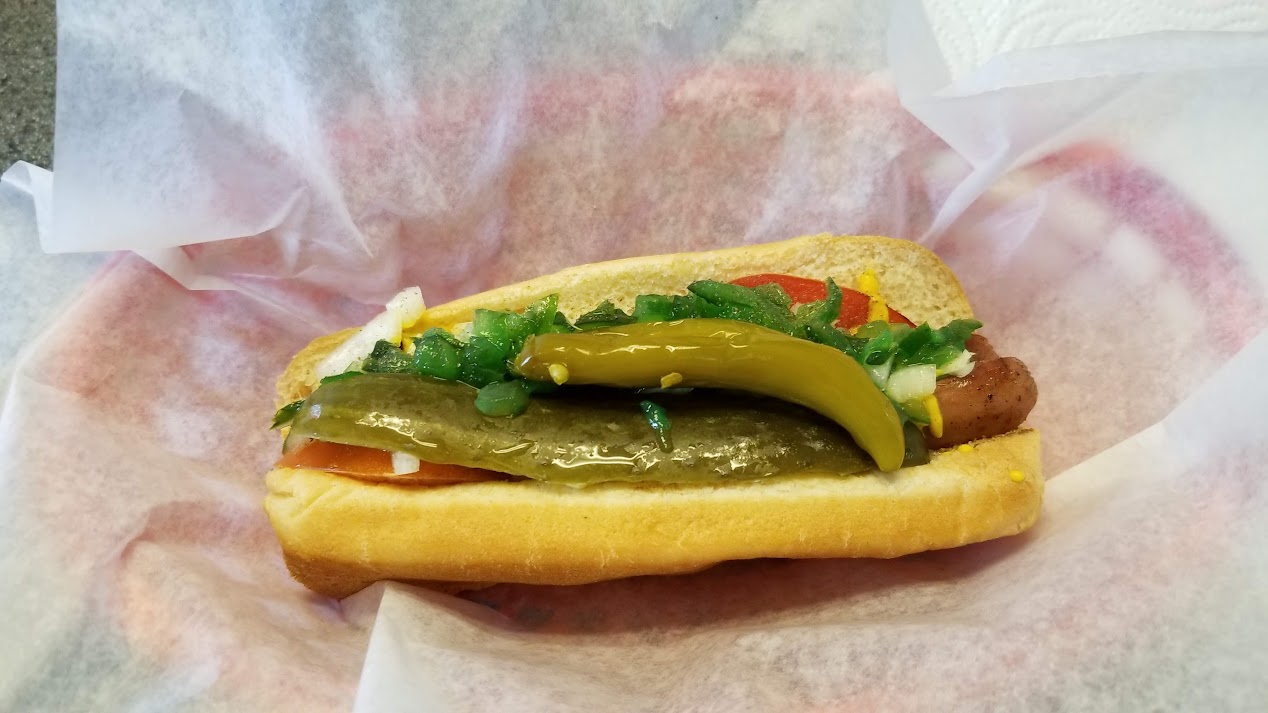 So what’s with the bright green relish we asked? The woman at the counter explained that the relish is what they typically serve in Chicago. When I googled it, I found out that the “unique color is often referred to as “neon green” which is created by adding blue dye to regular pickle relish.

And of course, there is always breakfast. The Corner Cafe offers a standard two eggs with bacon, ham or sausage, hashbrowns and toast for $5.29. 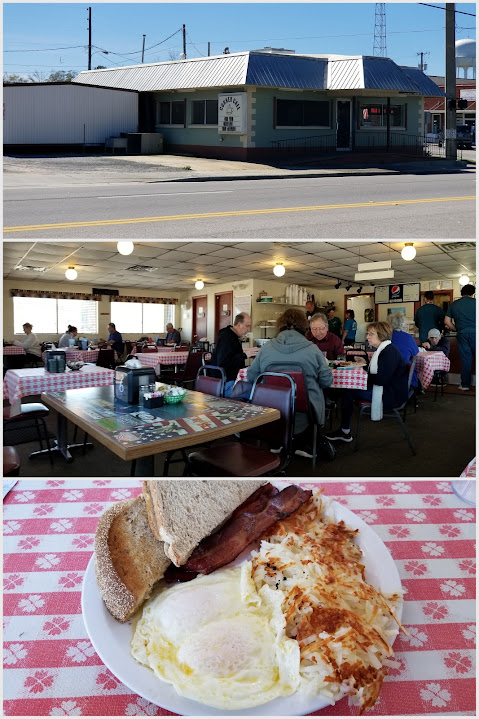 To satisfy a yen we had for Chinese food, we stopped for lunch at Plateful Buffet. Normally even when there is a buffet, we will still order off the menu because we aren’t volume eaters and usually don’t feel that we get our money’s worth. At this restaurant however, the lunch buffet which is served Monday through Saturday was only $7.99. Prices for the dinner buffet vary depending on the day of the week. You can even get the buffet to go, priced per pound. 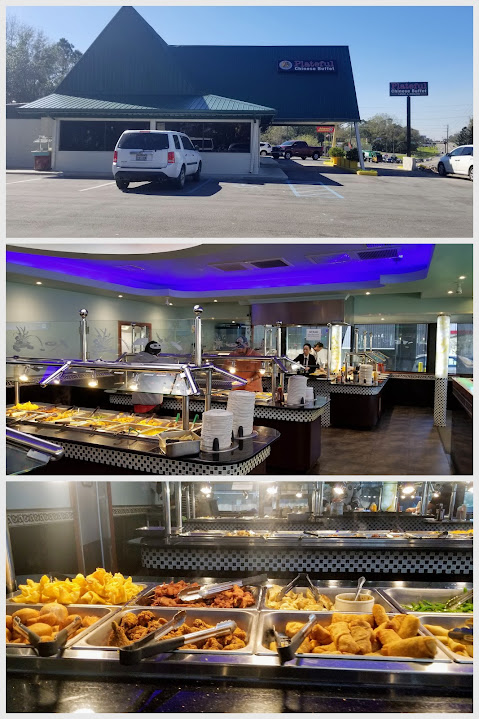 Oh, my, this is the largest Chinese food buffet I’ve ever seen! A dessert table, a salad table which included several soups, an appetizer table, main course table and a sushi table. On weekends, they even have a hibachi bar. This is the type of place where you want to try a little of everything but that was a struggle because there was so much to choose from. And everything was really good too!

Following our stay at Twin Lakes and then our second stay at Henderson Beach State Park, it was just a short hop to another one of our favorite places, Topsail Hill State Park for a nine night stay. Being spring break it was really busy in the campground.

We had been having a problem with our dash AC on the coach. Rob was able to schedule a mobile repair service, Southern Commercial Diesel, to come to Topsail to repair it. There was a refrigerant leak at a fitting on the compressor, but its working great now. Southern Commercial Diesel is based in Crestview, FL and covers a big swath of the panhandle from Pensacola to Panama City offering all sorts of chassis service and repairs. But we hesitate to recommend this company as they did not seem to want to work with our extended service contract provider. When they arrived to do the repair I asked if they had contacted the provider for authorization and they said they had. Later though we found out they had not.

Besides our usual walks to the beach, hanging out and visiting with Betsy and Nancy, there’s not much to report about our stay here. They invited us over for dinner several times which is always a treat since Nancy is a gourmet chef. 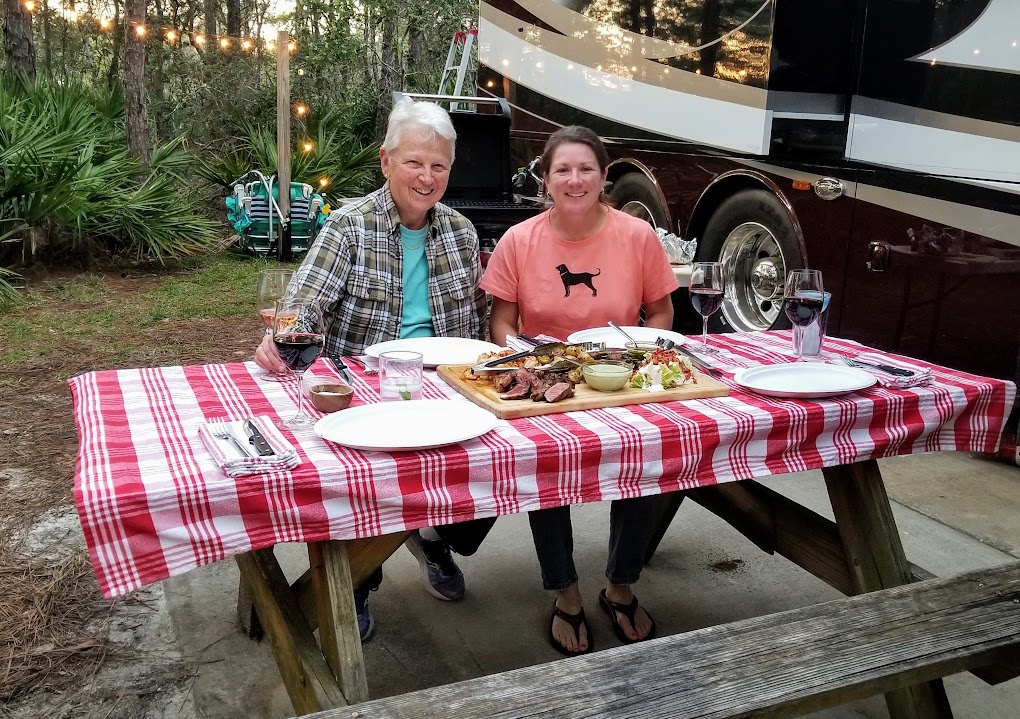 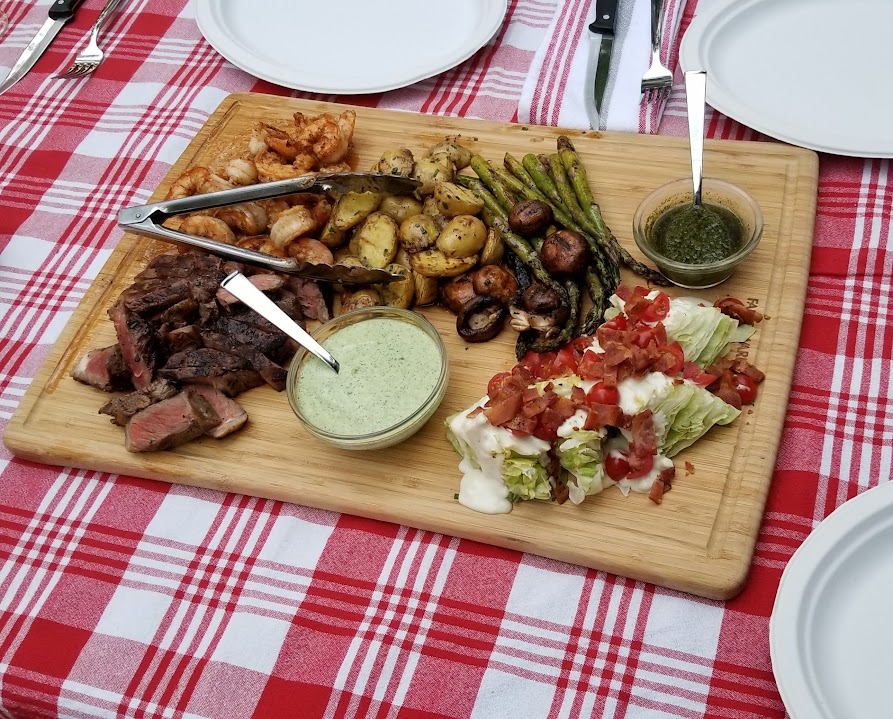 It seemed like we had just arrived there and then it was time to leave. Where to next? Another place we have been to a number of times. Stay tuned! 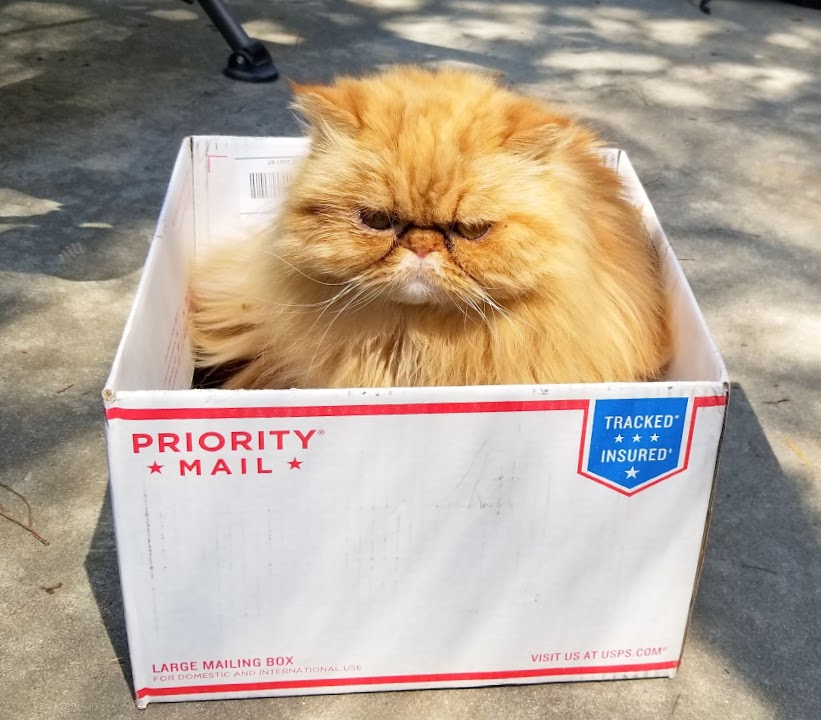